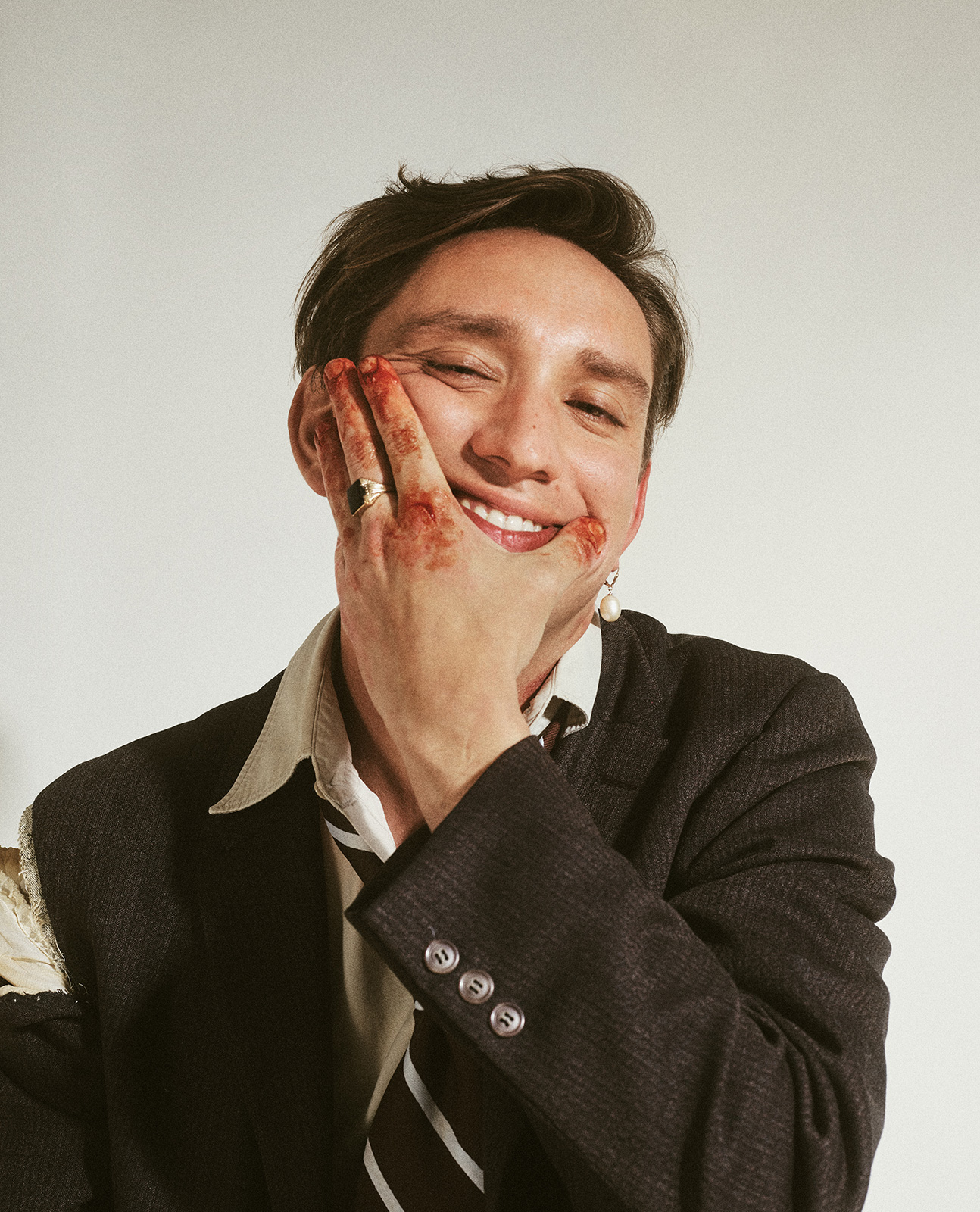 After a few hypnotic chords, in about 35 seconds, we could hear the unmistakable voice of Oliver Sim for the first time in 2018. It was quite mesmerising, it was one of those voices that seem to have been made to be listened to on big speakers. Together with Romy and Jamie they presented their first single, Crystalised. The xx began their musical career 14 years ago and have since become one of the United Kingdom's biggest bands. Today, Sim releases his first solo album, Hideous Bastard.

The album is a collection of ten incredible songs that are the culmination of 2 years of songwriting and recording, inspired by Sim's love of horror films and his own life experience, and tackles themes of shame, fear and masculinity.

He lets loose on Sensitive Child, an interesting piece in which grainy drums, piano and rough guitars uncover a narrative that seems to reflect his younger self and younger thoughts. Never Here and Unreliable Narrator speak of being present (or absent), and the beautiful ballad Saccharine contributes to the careful and enigmatic unfolding of the album and its story. GMT is one of the album's great moments, a perfect songwriting exercise that poetically provides a beautiful reflection on ‘the moment’ and the love for a town, reminiscent of Walt Whitman's Leaves of Grass.

But the best song on the album is undoubtedly Hideous. With the help of his lifelong hero and ‘guardian angel’ Jimmy Somerville on guest vocals, the single sets the scene for the forthcoming album and sees Sim speak publicly for the first time about living with HIV since the age of 17. It launches with a video made by another personal hero, French director Yann Gonzalez, who has also collaborated with Sim on an upcoming queer horror short film of the same name that premiered as part of Critics' Week at the Cannes Film Festival and is released this week on Mubi.

Hideous is undoubtedly a brave song in both its artistic and personal nature, but there is something beyond its great skills as a performer. The way he tackles HIV in a song in 2022 not only feels right in this way but is a testament to contemporary storytelling done with love and hope. The strength of this song makes you stop whatever you are doing, and listen intently to his voice recounting something that is still socially difficult to tell in such a reassuring way.

Every little detail of the musical production is immaculate, this is a journey between musical genres that takes us into his individual style. He becomes a modern crooner who plays with horror imagery to portray his own experiences safely and exquisitely with a unique sound, a great sense of humour and a hopeful approach to life. Hideous Bastard is not only one of the best albums of the year and an impressive debut but also a cultural piece for us queer and gay men to relate to and see our world grow with songs that speak to our intellects and spirits. It is exhilarating to listen to an artist with such a buoyant and artistic universe. Because, as he puts it, “everything is stupid and there to be enjoyed.”

Hi Oliver! Thank you so much for dedicating your time to this. How has your summer been?
My summer has been taken up mostly by my album Hideous Bastard, but I'm not mad about it in the slightest. I’ve been working on this record for over 3 years now, so I'm more than ready to birth this child!
After listening to the album, I must congratulate you. It's superb. It's fun and emotional at the same time, and it seems to capture a lot of things that must have been very hard to live through, but you sing about them in a very unapologetic and firm way. When did the idea of making your first solo album come about?
I haven’t dreamt of making my solo record at all really, I think I’d always seen making a solo record as breaking away from The xx and I love being part of them – I’m in one of my favourite bands with my two favourite people – but I think my outlook on a solo record changed after Jamie xx made his. Jamie’s record only improved the band – he brought so many new ideas and ways of working, which in turn planted a seed in me that it was something I could also do. I’m not sure I could have made this record any sooner though – I don't think I was at a point in my life where I felt like I could have been as confident and open as I have been.
“I've written a lot about fear, shame and masculinity, but I made these songs as a way to free myself,” you mention in the album's press release. These are issues that, unfortunately, many gay boys around the world have to face at some point in their lives in order to feel worthy. And culture is certainly one of the tools that can help us do that. Now we have this gorgeous album. I wonder if at any point in the recording and writing process you thought about how listeners could relate to this, and if that has in any way defined your relationship with your fan base.
I made this record very much about myself, and for myself. When I first brought the song Hideous to Jimmy Sommerville, his advice to me was “I hope you’re doing this for yourself, and don’t see yourself as being a martyr for a cause – you can only write about your own thoughts and feelings and if that resonates with anybody else then that’s fantastic,” and that has been my attitude throughout.
Sensitive Child has an amazing production, a great chorus, and a really cool part where we can hear your voice almost screaming at the end, in a different register than most of your xx fans have heard before. But the lyrics are quite intriguing, can you tell us a bit about the song?
It is one of my favourite songs on the record, and it’s definitely one of my favourites to perform live. It was one of those rare moments where everything came together very quickly, I’m normally one of those people that spends months torturing over a song, so for something to happen so instantaneously was very satisfying. I try not to over-explain lyrics, out of fear of not wanting to shatter somebody's interpretation – but I would say this song is very much about childhood and ‘sensitive child’ is one of those euphemisms I’ve often heard when describing an unknowing queer kid.
Romance With A Memory has this very relatable message; it’s quite contemporary in the sense of what dating is like in the 21st century. The lyrics of the song say: “You're just an idea, to keep me company late at night. You were never really here, not like the picture I have in my mind,” and they're very poetic. Why did you decide on this track for the first single?
I see this album, and album campaign very much like a movie, and Romance With a Memory was the note I wanted to open with. It’s one of the more lighthearted songs on the record, and starting with a love song (which is what my career to date has mostly been), lures the listener into a false sense of familiarity, and comfort, which I later expand on with subsequent singles.

You collaborated with Jimmy Sommerville, who plays a beautiful role in both your song and the Hideous video; you were recently photographed by Wolfgang Tillmans for Gayletter, and you had the fabulous artist Gena Marvin to star in the lyric video for Romance with a memory. How important is it for you to work with other queer artists?
One of my main agendas in making this solo record has been to make some friends. Being in a band with my two best friends has given me the perfect excuse to not put myself out there and gain new relationships. I’ve made an active effort to reach out to queer artists in particular, and specifically, the ones who paved the way for us all – like Jimmy Somerville and Elton John. Those relationships have really nurtured me and taught me so much.
Who were your musical influences when you were a teenager and who are the ones that kept you company when creating this album?
Whilst making this album, I have re-engaged with lots of the music I first got into as a kid. There was my parents' music, like The Beach Boys and Talking Heads – as a child, David Byrne was always a cartoon character to me, he was the man with the tiny head and big shoulders dancing around, and I think his ability to retain his sense of humour in everything he does is something that I now really value as an adult. There were also bands like Placebo, who when I was 14 and first got into them meant the world to me – Brian and Stefan from the band were the first people I'd seen who identified as men but had the femininity and beauty that I admired in women, yet they were making angry music. I think seeing those attributes in places like NME really changed me and inspired the teenage me to be myself more.
I saw your interview with Elton John, and I found it very touching when you both talked about the Netflix show Heartstopper, and also that Jamie and Romy (from The xx) are incredibly supportive friends, almost like family. You worked with Jamie on the production of the album and talked about Romy being your best friend, how did you manage to create such an individual album while being close to your best friends and also bandmates?
At the beginning of making this record, I almost had an identity crisis. I’ve been in The xx since I was 15, and the band has a very clear DNA and sound. I knew I didn't want to re-create that but it brought up the question – if I'm not one-third of The xx then who am I? It was a daunting thing to start with but soon became exciting because I could try absolutely anything, which I did. The first few songs I made were terrible and they’ll never see the light of day, but much like how The xx started, eventually, I made one mistake that I quite enjoyed and lent into that.
What have you learned about yourself during the whole creative process of the album? You seem to have a great sense of humour. What are the things you have learned about yourself during the whole creative process of the album?
I might obsess and critique the things that I say and do, but more times than not, people aren't really paying attention – because they’re obsessing and critiquing themselves, which is both nihilistic yet strangely comforting. Everything is stupid and there to be enjoyed.
Can we expect anything from The xx soon?
The xx is still going strong and you will be hearing from us soon.