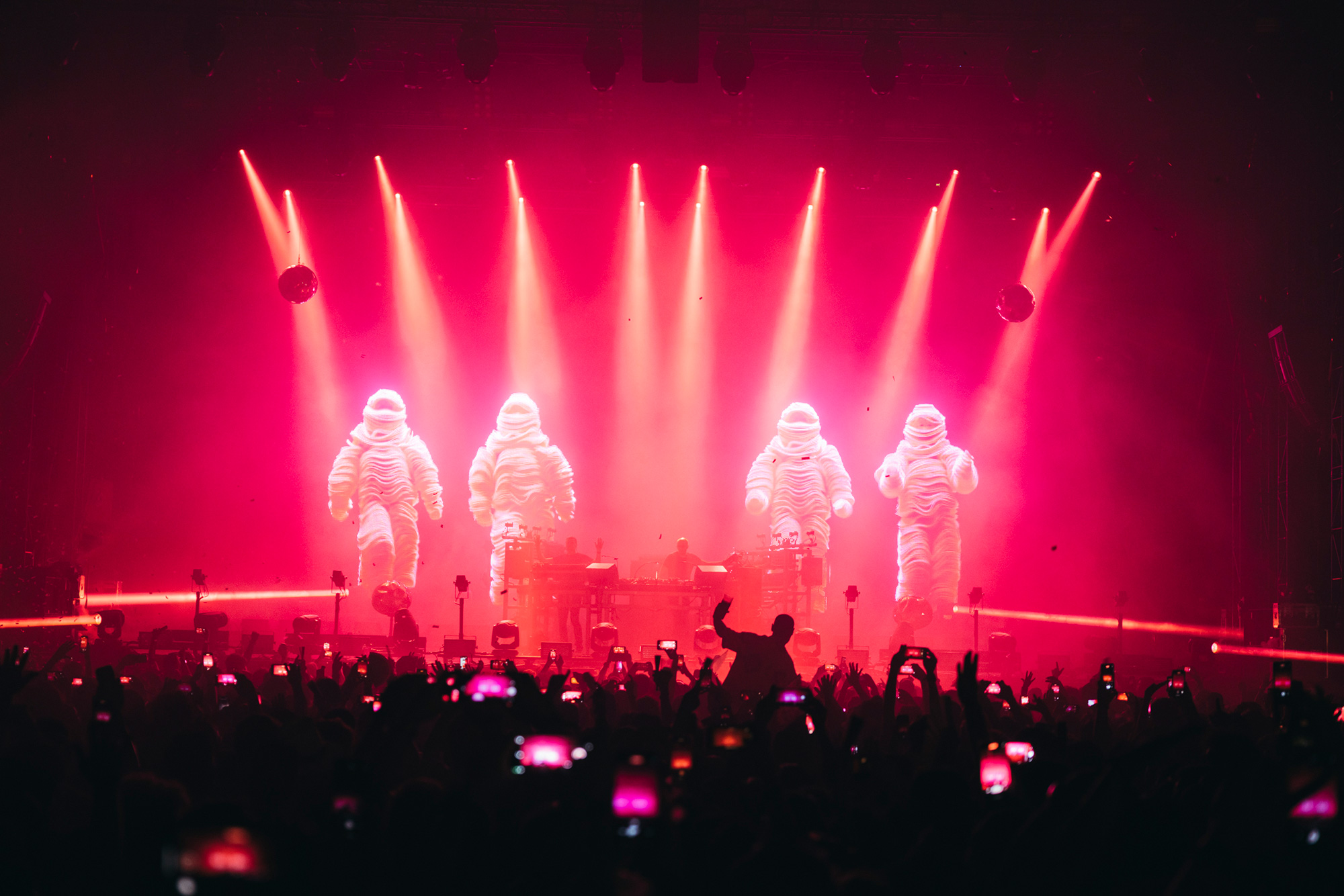 So, we left off in 2019 with an exquisitely radical and queer proposal which left us wanting more. And after a 3-year-wait, our expectations have definitely been met. We longed for an open-air festival which could deliver the best electronic and urban performances and we got what we asked for! This edition of Sónar Barcelona, held from June 16 to 18, was the best stage to discover up-and-coming artists as well as enjoy the shows from consecrated musicians and DJs (thanks to known Sónar repeaters like The Blessed Madonna or the iconic The Chemical Brothers) for the first time since the untimely pandemic, and what a way to do so!
Thursday was a day of contrasts, with performances ranging from synth pop to reggaeton, to experimental electronic and house music. The day kicked off strong with Awwz, a Barcelona-based DJ who played the first tunes of the day and was joined by another local artist, Demmy Sober, to sing a few songs live. The message was clear: women empowering women, creating community, and supporting each other.

By the end of Awwz’s set, ACERO cover star Rojuu turned all the attention to him with a big entrance: he was carried to the SonarPark stage by a group of nazarenes, typical characters/figures of the Catholic festivities during Easter celebrations. His concert was that of a rockstar (mosh pit included), and sang early hits like Umi as well as songs from his two new albums, Kor Kor Lake and Starina.

In the meantime, Sega Bodega presented a much more intimate concert at the SonarHall stage after having toured Europe these past months, with his dreamy voice matching perfectly the ethereal setup he had as a backdrop. Another dream-like performance was Eartheater’s, who received a standing ovation from the audience at SonarComplex – the stage with more experimental proposals.

On the other hand, Ms Nina brought the ass and the sass to this year’s festival, with a devoted audience that sang along hits like Nasty or Tu sicaria, and even covers of Don Omar’s Dile and Lorna’s Papi Chulo. At SonarVillage, Lady Shaka was also making people dance with her genre-bending DJ set, which included songs ranging from remixed Maori folk to Rosalia’s Motomami.

Chico Blanco’s live performance was another highlight of the day. With incredible energy and trippy visuals on the background, the Granada-based artist sang some of his most known hits including WTF is in my cup and Gominola. Right after, Australian sensation Partiboi69 brought the humour and quirkiness to the festival in a fast-paced DJ set married with Y2K visuals including Tekken fights and cowboys.

At the same time, Finnish duo Amnesia Scanner was bringing their post-apocalyptic performance to SonarHall, with a multiscreen setup, lots of smoke, and even live singers. Equally experimental was Uruguayan DJ Lechuga Zafiro, who closed the SonarPark stage. But the perfect ending to Sónar’s first day was Jayda G, who lit the SonarVillage stage on fire with her unique blend of house music and live vocals. Beautiful and uplifting. 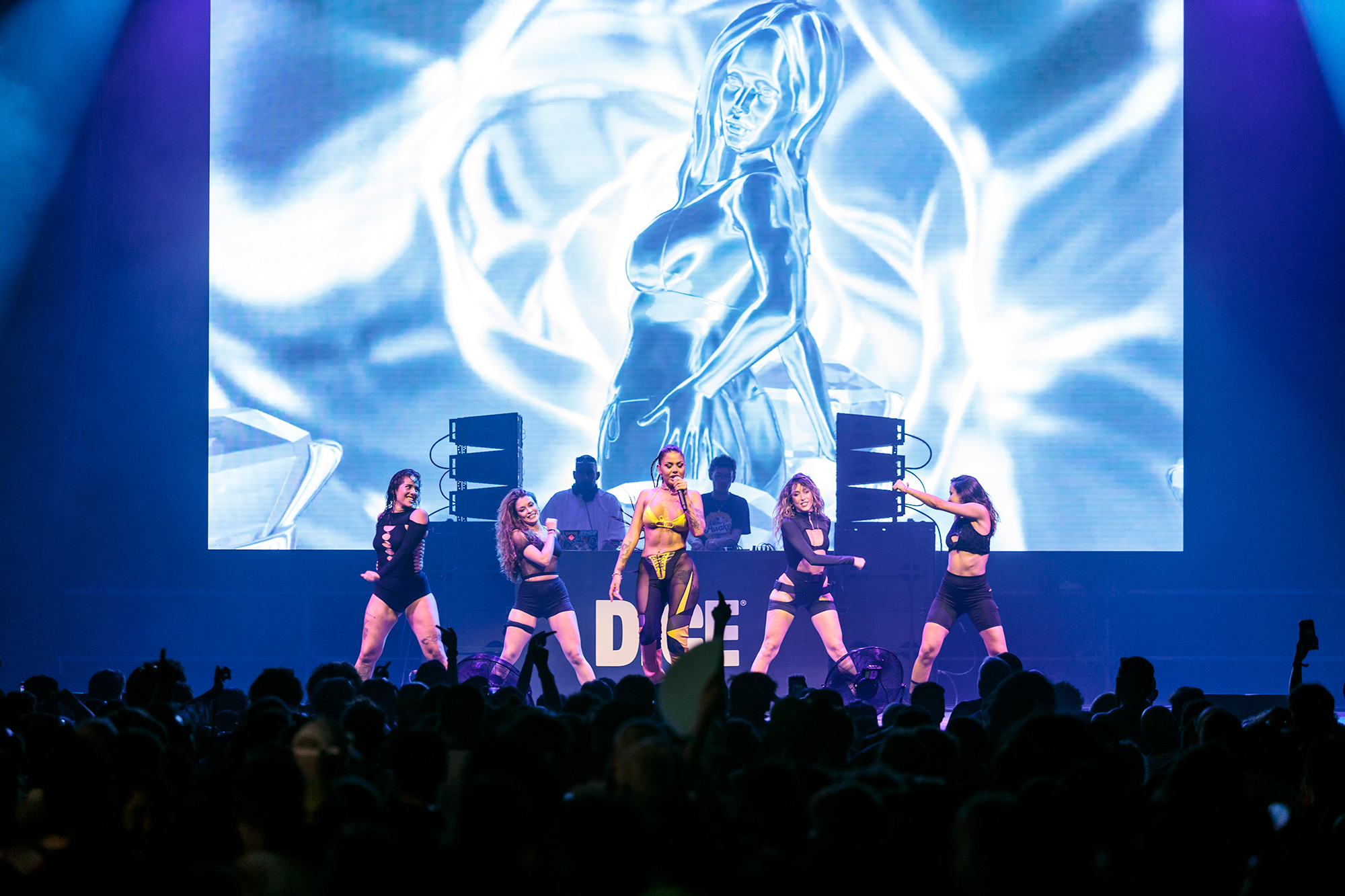 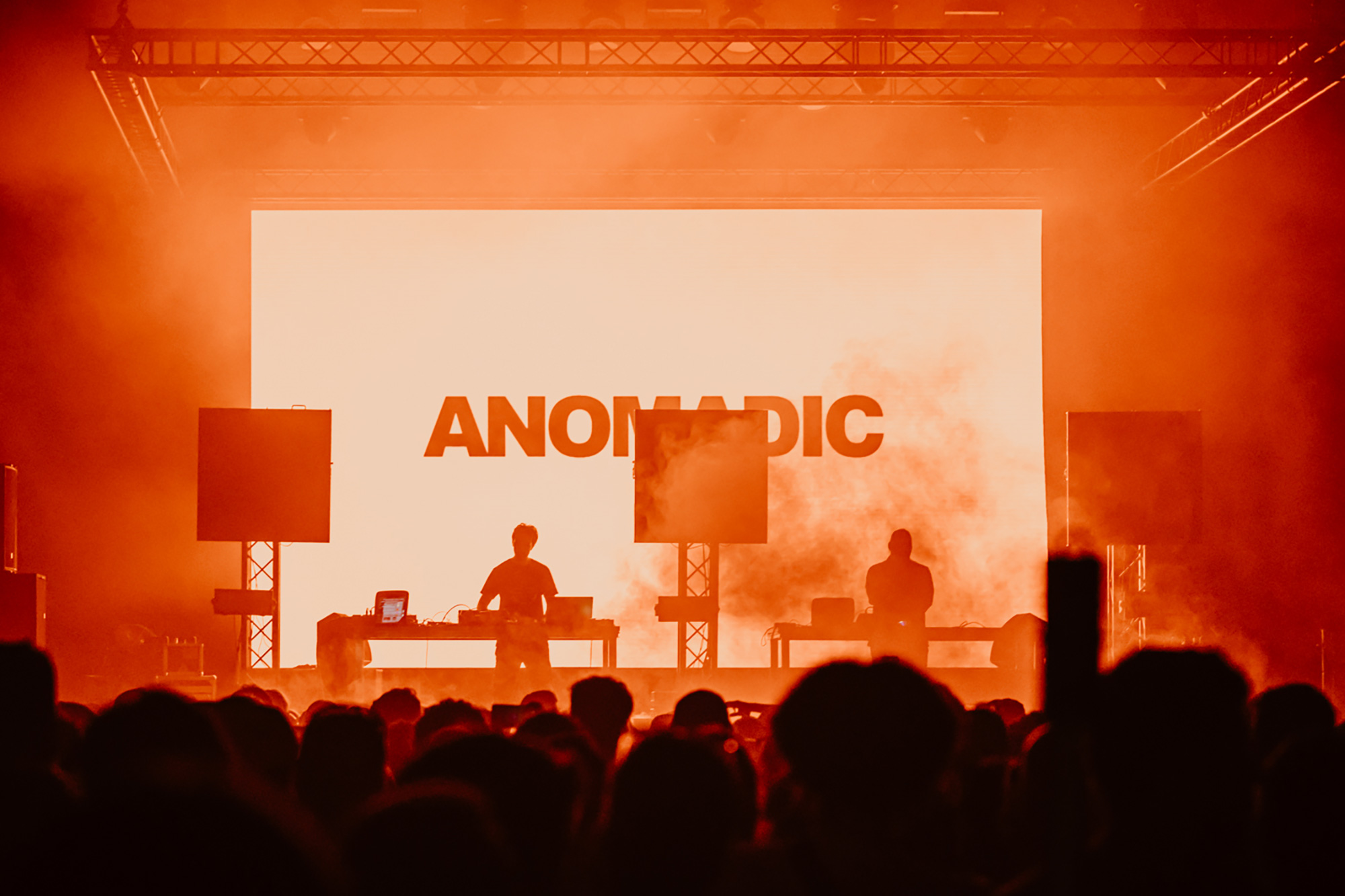 Amnesia Scanner
On Friday, we started off with VVV [Trippin’you], a Spanish group blending rock and electronic music. First, a member of the group came out wearing a balaclava and started playing video games that were being screened live. Soon after, the rest of the group joined him onstage to present their latest album, Turboviolencia, with an amazing response by the audience – we saw the second mosh pit of the festival there.

But speaking of great energy, LSDXOXO’s performance was lit. Highly sexual, entertaining, and political; the Berlin-based artist gave a live performance for the books. After some techno bangers and a heavy metal-inspired introduction with an electric guitar, LSDXOXO conquered SonarHall with an impressive stage presence and hits like Sick Bitch.

There was a lot of expectation for Niño de Elche’s site-specific performance in collaboration with Ylia and Banda La Valenciana. Titled Concert de músika festera, the concert started with an entire band appearing behind the audience and making their way up to the stage, where they celebrated the marriage of traditional music with electronic sounds. It was festive, indeed, and one of those performances that define the festival as one of the most progressive events in the country.

And following such a unique performance, we got to see Yung Singh and Suchi's b2b, which might have been quite traditional in format, but the music was anything but that. Infectious beats, reggaeton and hip-hop influences and Punjabi music mixed in together to create one of the sets that made us dance and sweat the most throughout the festival. You didn't even want to leave the SónarVillage stage but only someone like the incomporable Samantha Hudson could have done that.

What followed was a performance that brought the right amount of energy and the exact vibes that we needed at the time. Through her frenetic roller-coaster filled visuals (which also included a distorted digital version of herself), amazing lyrics from her original songs like Perra, Burguesa arruinada or more recent songs like Por España and her wild acrobatics, she put on quite the show. The perfect antidote for after the high energy performance was the DJ set from the duo from Vigo Yugen Kala, which played more of a laid-back techno.

After these performances, French duo Polo & Pan was our last concert at Friday’s Sónar by Day. Their music made the audience feel at ease, connected, and free of worries – just free, basically. Joined by a live singer, they were the ideal performance to experience the sunset at SonarVillage. 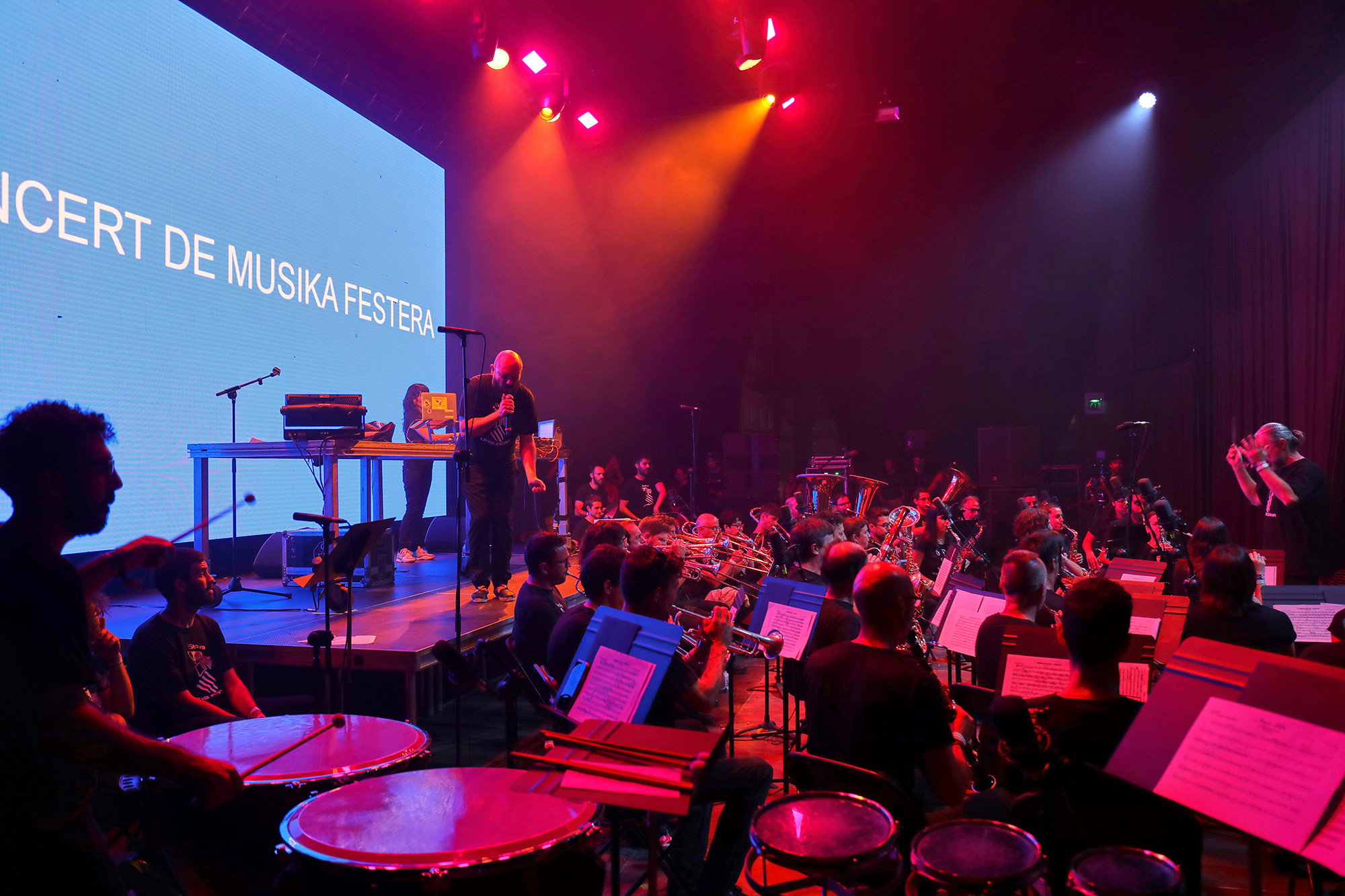 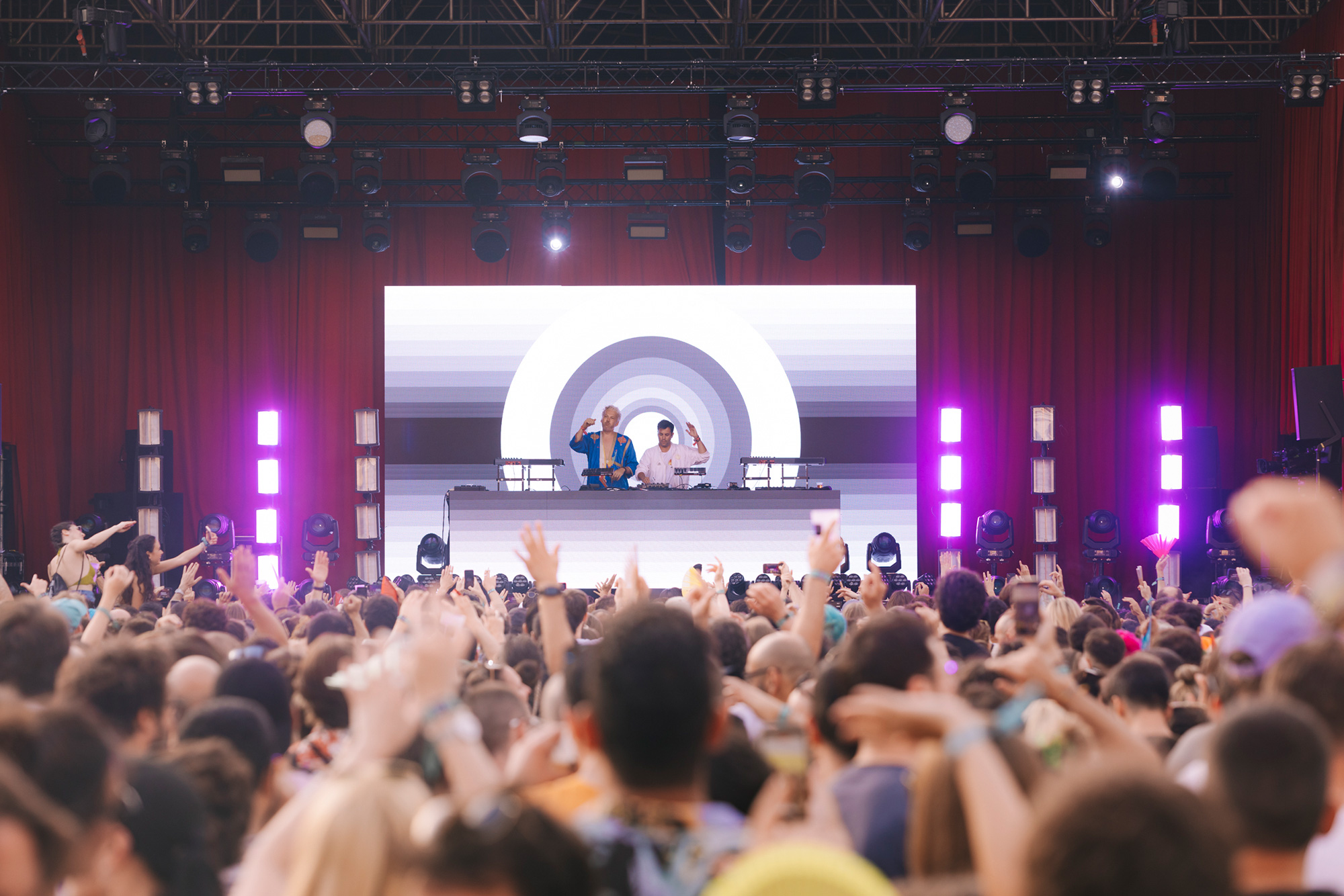 Polo & Pan
And then, off to Sónar by Night. Change of location, massive crowd, and huge expectation. It was time to see C. Tangana, one of the festival’s headliners. And boy, oh boy, he didn’t disappoint. His latest album, El madrileño, was praised internationally, and he even starred in one of the most remarkable Tiny Desk’s performances ever. His concert was no different. He brought his entourage with him – including other renowned Spanish artists like La Húngara and Antonio Carmona –, a live band, and even a guest star: Nathy Peluso, with whom he sang Ateo, whose music video was as polemic as successful.

That same night, Moderat performed as well. After a 3-year hiatus, the German trio proved why they are still one of the most forward-thinking groups today with their new live show, which included new music as well as unmissable songs like A New Error. And the night just couldn't get any better, as this act was followed by the famed music duo The Blaze which played all of their classics along with their now-iconic visuals on screen. They brought everything we had ever wished for, so much for never meeting your idols.

To finish the night, we opted for the collaborative DJ set between Jennifer Cardini and Perel. Two incredible artists that combined electronic sounds with Perel’s ethereal voice as the sun was rising. 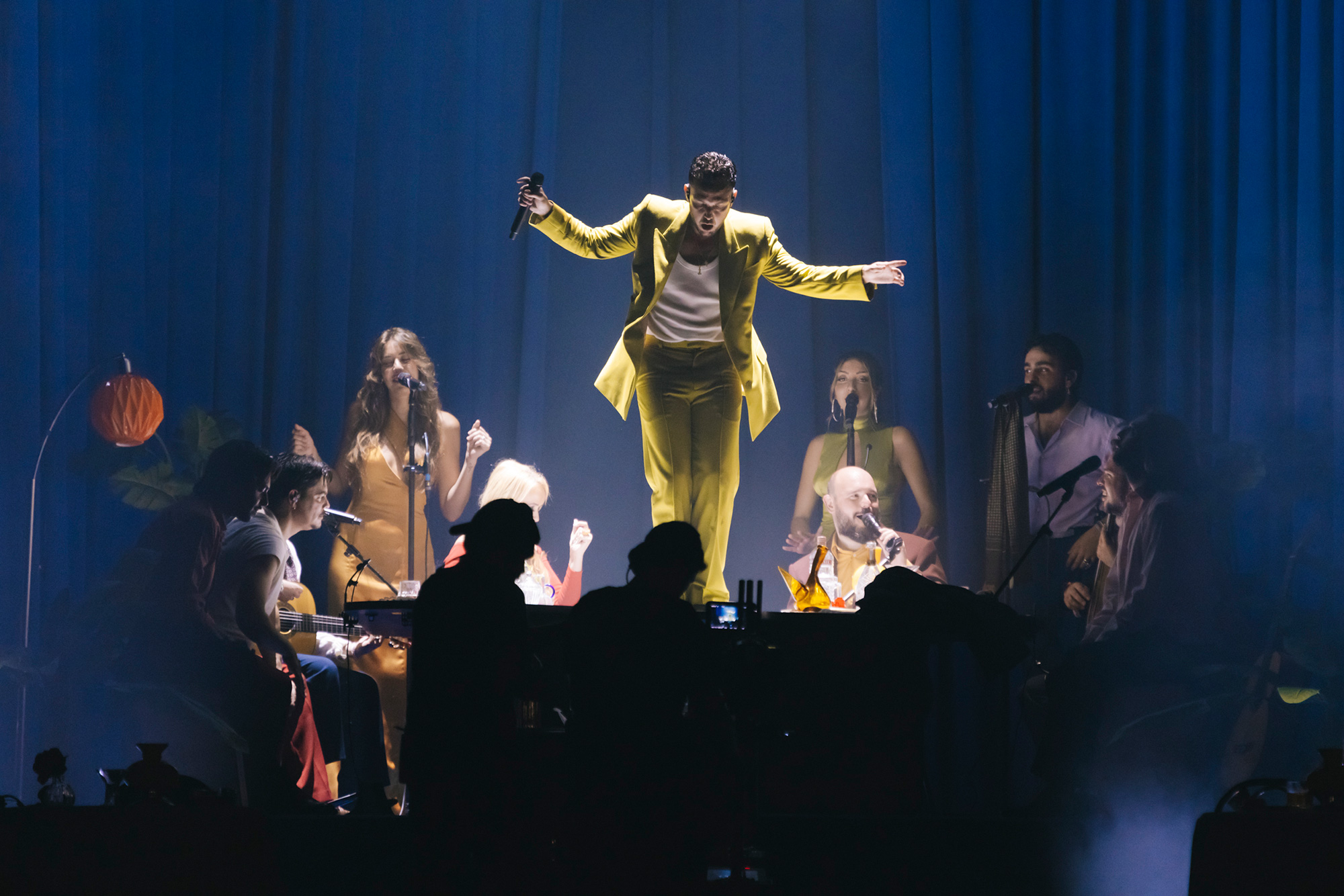 Moderat
On Saturday we headed to a very special concert and performance by musician Serpentwithfeet. Delivering songs from his latest album Deacon, his soft voice inundated the SónarHall stage in the early afternoon, making this a sweet start to a very intense and packed last day.

The energy was brought by Barcelona's commuter town L'Hospitalet's most famous rapper, the neighbour from La Florida: Morad. The SonarPack stage bounced up and down for an hour straight with viral songs of his like Pelele or A escondidas, featuring $kyhook. And not only that, with a very powerful message denouncing police brutality and the persecution of minorities in poorer neighbourhoods from Barcelona's periphery, and even a not to footballer Kylian Mbappé (by saying “I run like him, I'm as good as him, I'm just not a triator”), his highly political concert targeted to locals at an international festival like Sónar, was exactly what we had been waiting for.

And just around the same time, or 10 minutes before the end of Morad's concert to be exact, we got to witness Maria Arnal and Marcel Bagés' site-specific performance titled Hiperutopia. It was an ethereal concert backed by a chorale of singers dressed in white which delivered a beautifully exquisite show, thanks, in part, to the help of their frequent collaborator Holly Herndon.

The last concert of this year’s Sónar by Day was by the ever-evolving Tommy Cash. The Estonian rapper is always thinking out of the box – if you haven’t been following his recent Paris Fashion Week looks, you’re missing out –, and he’s as charismatic as he is talented. The energy at SonarHall was raw and pure: the audience was vibing with him from beginning to end, and his visuals (think 2009 [email protected] Facebook mum groups) were the icing on the cake. 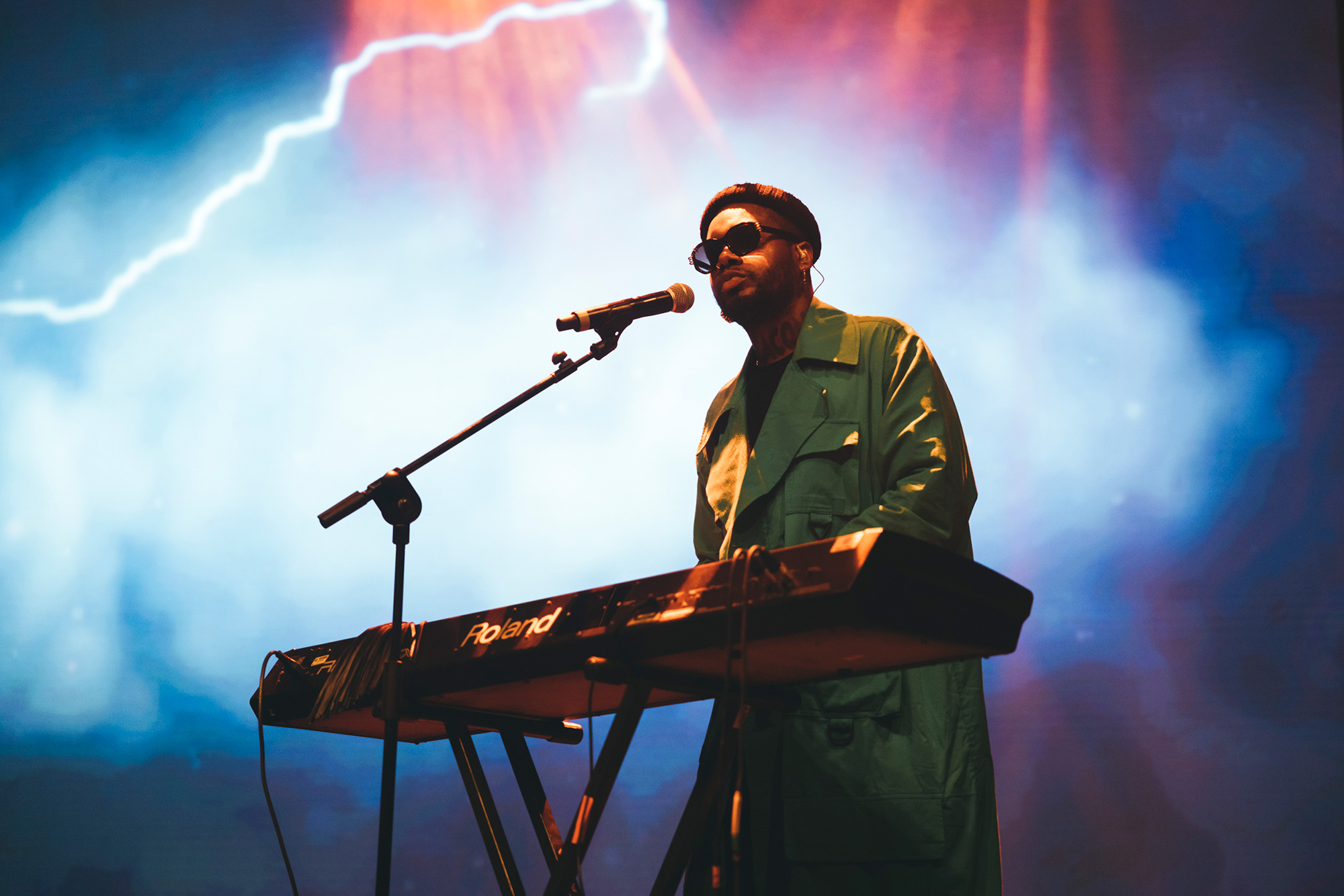 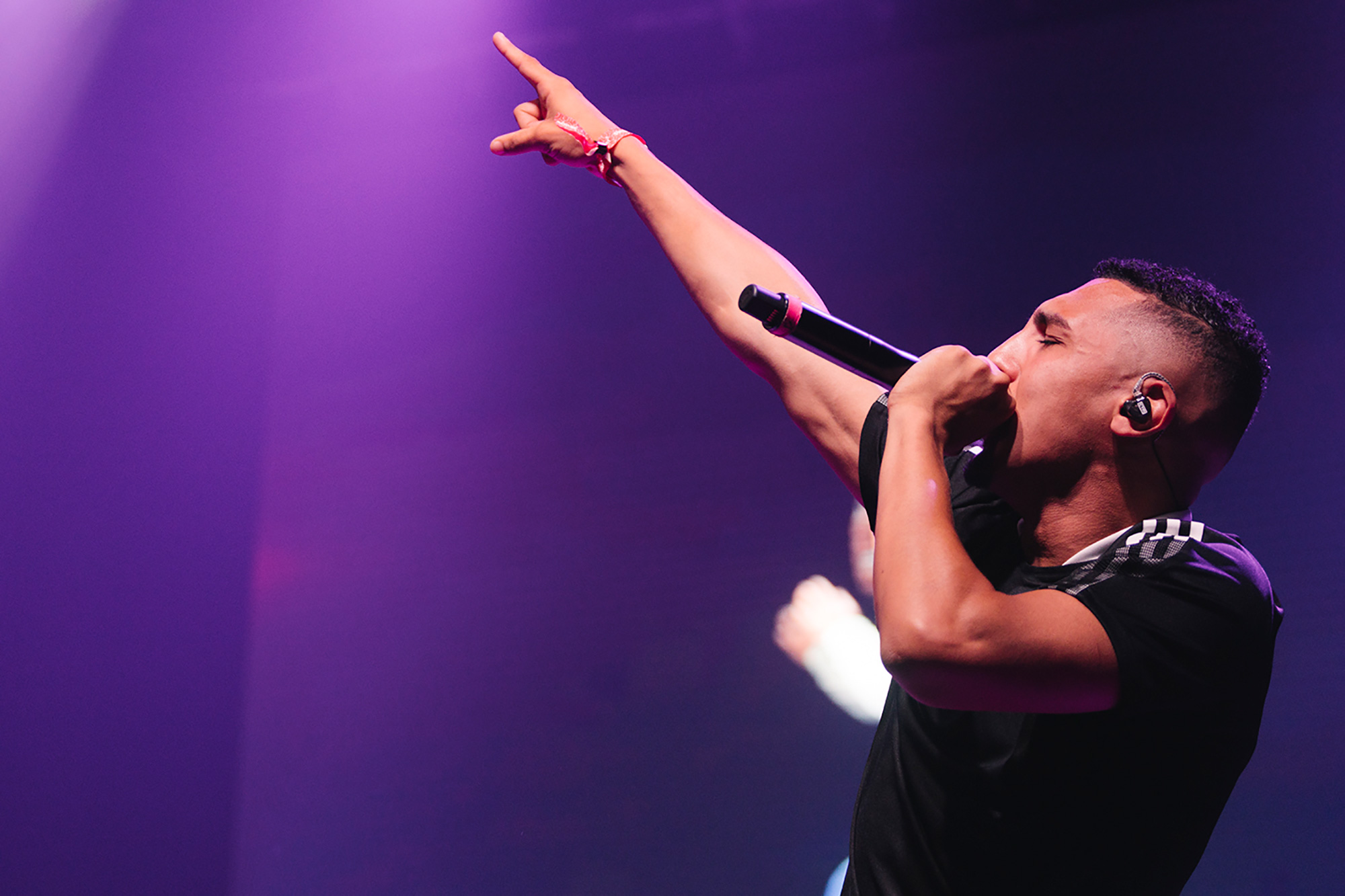 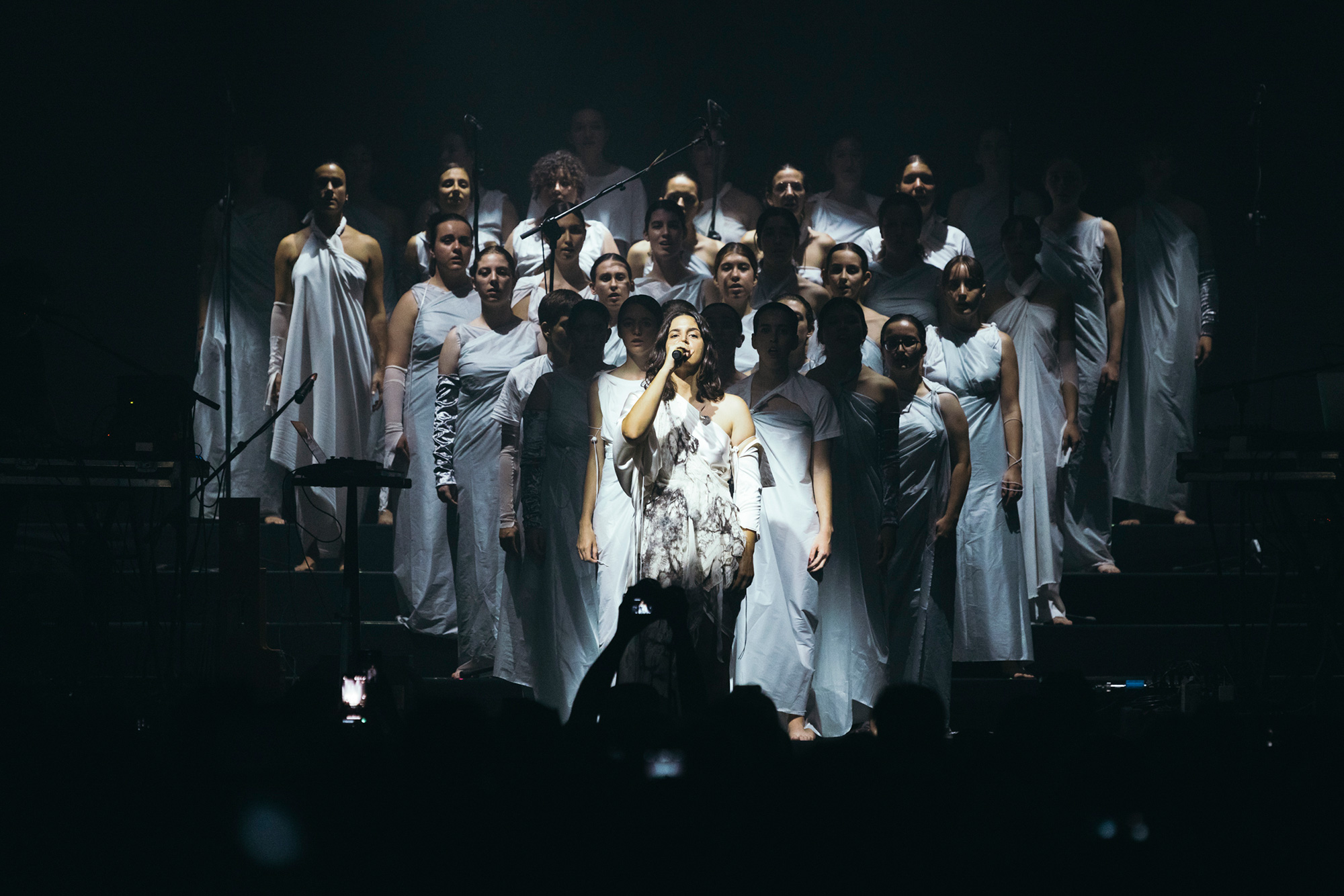 Maria Arnal and Marcel Bagés
And the first DJ set from Sónar by Night from the last day came from Barcelona-based Mbodj from Jokkoo collective. It was a dark, techno-filled set with audiovisual support coming from Akuyte; a great way to start the last night, full of energy and ready to dance!

Right after, one of the most – if not THE most – expected performances of the entire festival: The Chemical Brothers. It was explosive, thrilling, dizzying, jaw-dropping, heart-stopping. All at once. And long; so, so long. An hour and a half of cinematic visuals, laser beams, and even two giant robots that descended from the ceiling. The United Kingdom duo has been defining what electronic music means for the past two decades, and their live show at Sónar just proved that their experience and vision are as fresh and magnetic as when they started.

And just as this concert finished, another staple from Sónar who needs no introduction, Arca, graced us with her presence. Her show was divided into two parts; the first half was an actual concert filled with absolute bangers like Rakata, Mequetrefe and Klk, which was followed by a DJ set which started with her uttering the phrase “get ready for the whips!” This was a laser light show which ended with a short piano and voice performance that left us with something sweet, following a hard, experimental and mostly acoustic – let's not forget the whips – set.

What followed were two amazing, danceable DJ sets by Ehua and Joy Orbison. The former was more about shaking your ass – and shake our asses is what we did –, whilst the latter made us move frantically to different paces and beats. Both sets were great precursors to what was to come to finish off the festival.

And what's the best way to finish the festival? Two uplifting DJ sets with influences ranging from funk to house, to soul and disco. First, French newcomer Folamour, and after, veteran The Blessed Madonna. The latter invited Kiddy Smile to join her on her closing set, bringing ballroom and voguing culture to Sónar by Night – Kiddy had actually closed Sónar by Day a few hours earlier.

3 entire days of dancing, partying, loving and singing. But most importantly, 3 days to come together again, find old friends and make new ones, celebrate music and love and culture and life. Because, after 2 harsh years of not experiencing the joy of open-air festivals, a cultural event like Sónar Barcelona was extremely necessary. And now, all we can do is wait for another year… as we used to do. We can't wait to see what their 30th anniversary will bring! 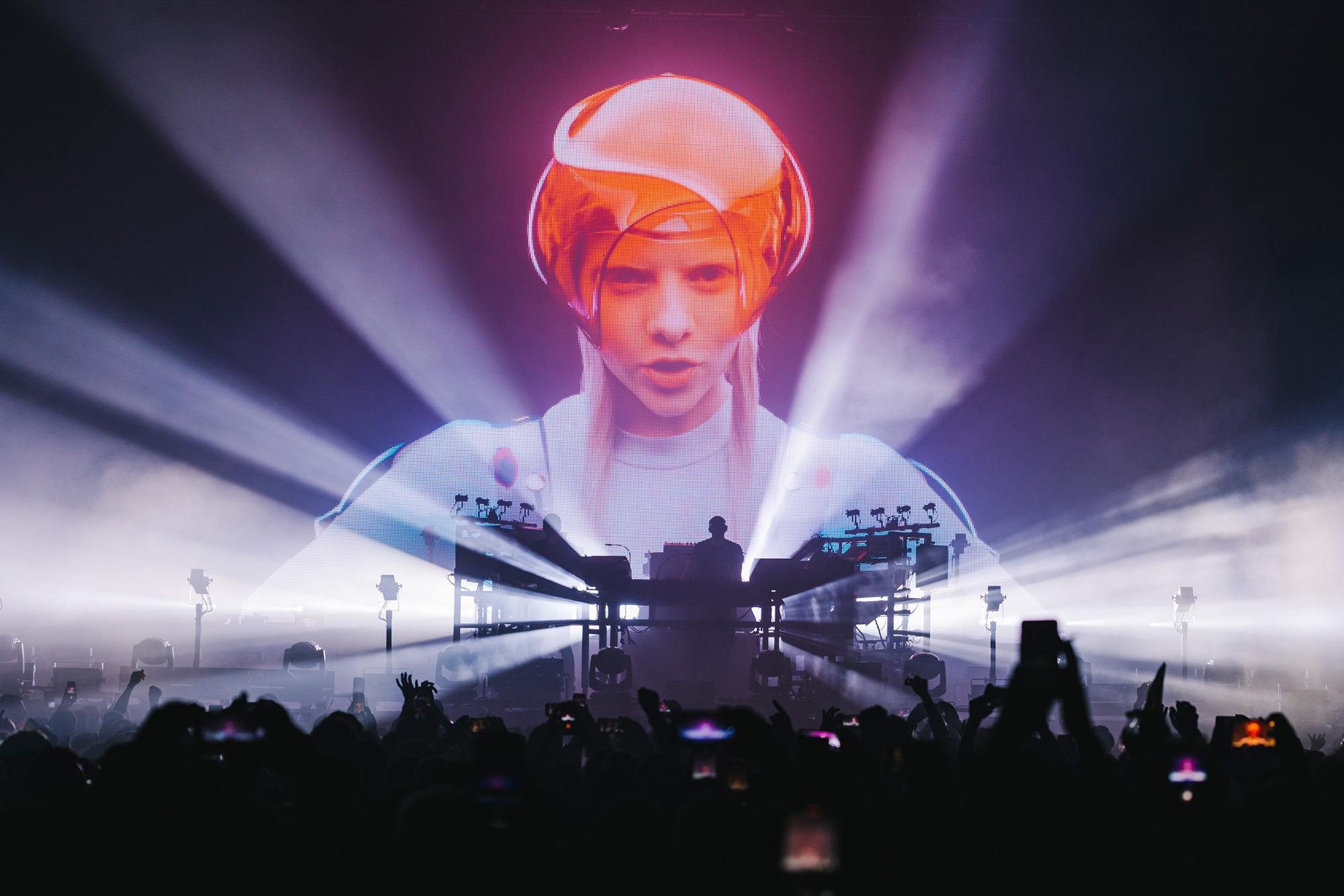 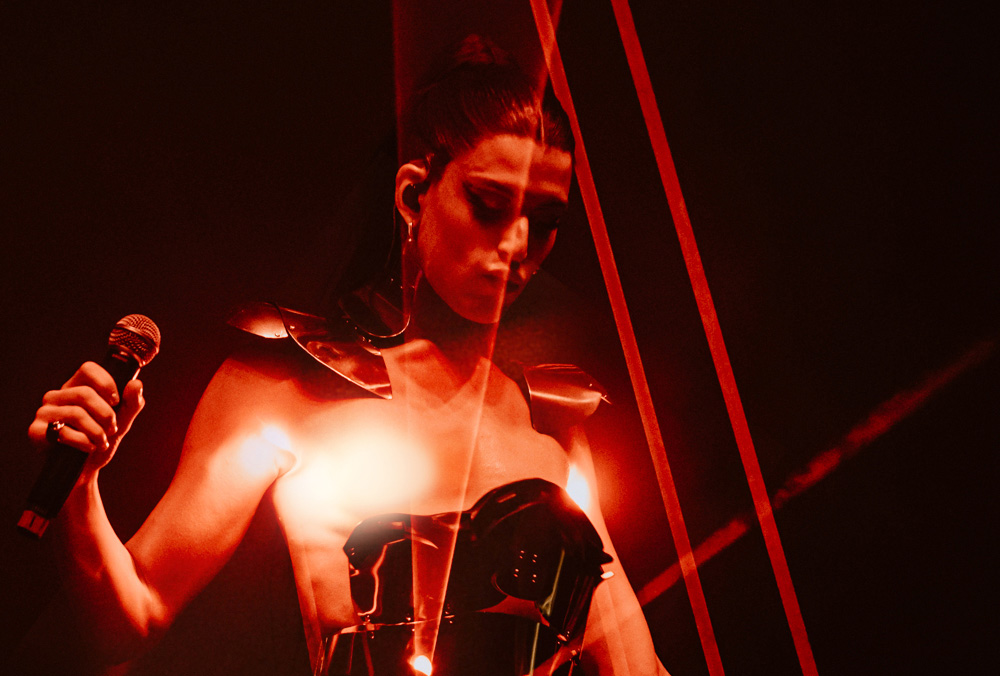