Reflections in a golden eye 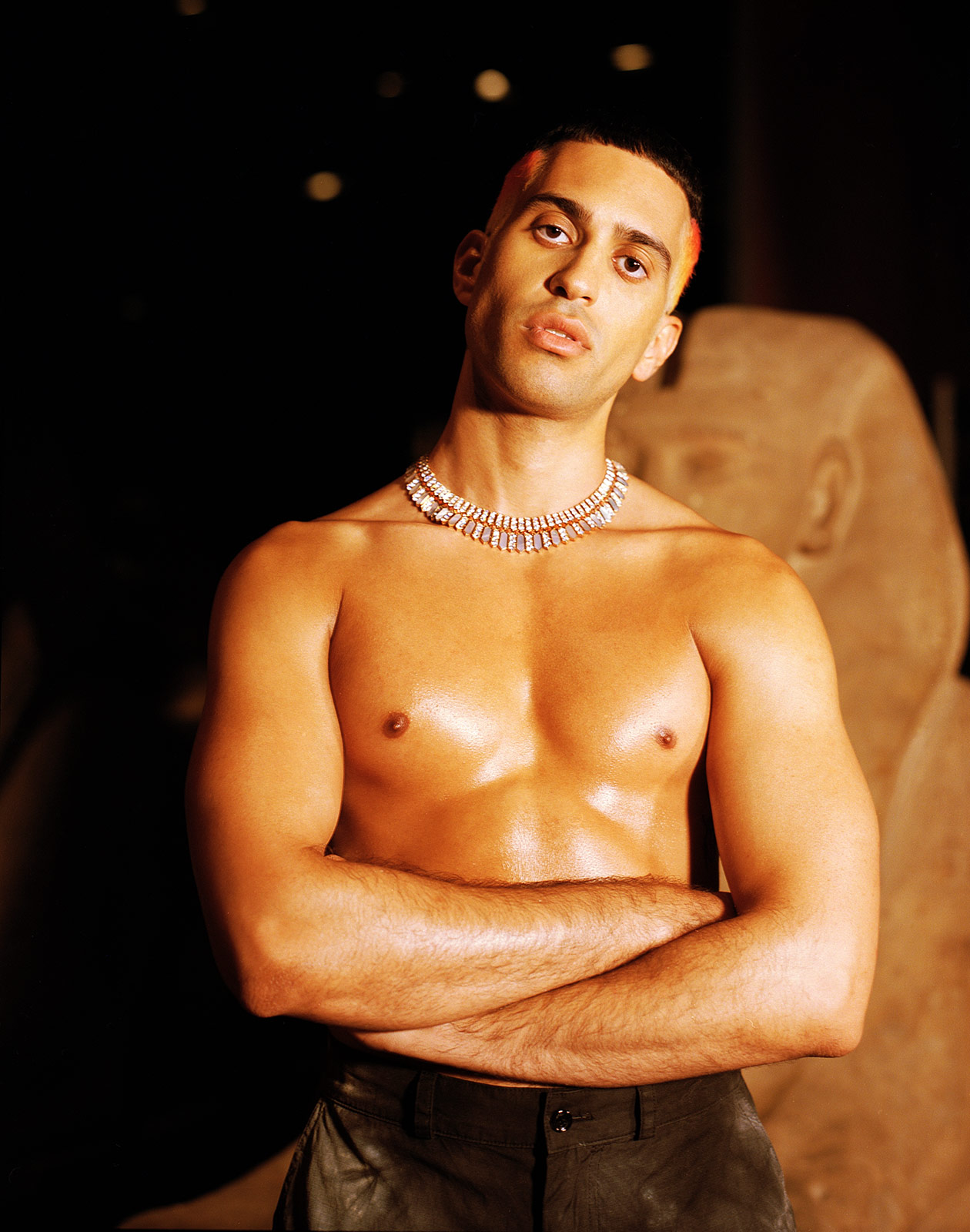 Not knowing who Mahmood is means not having listened to the radio or paid attention to the charts of Europe’s biggest hits in a long while. Since the release of Soldi, an instant success where Alessandro Mahmoud, aka Mahmood, told the world about his childhood marked by the absence of a father figure, the Italian-Egyptian singer has not only amassed a cult following of millions of people but he has also become one of the most promising new artists on the music scene.
His first album, Gioventú Bruciata, was positively appraised by the audience and critics for its agile and catchy melodies, but also for the lyrics’ autobiographical content, turning each song into a new chapter of an intimate and sincere journal. Now it’s time for Dorado, his first song in Spanish, in collaboration with singers Feid and Sfera Ebasta, released in the summer. Today, we speak with him about fashion, his concerns about fame, the weight of the past, and his upcoming second album.

Alessandro, let’s give the readers some context. In 2012, you participated in the sixth edition of X Factor Italy; in 2016, you took part in Sanremo Music Festival, and in 2018, you went back there to unveil your mega-hit, Soldi, which later elevated you to the second place of the 2019 Eurovision Song Contest. These experiences separate you from other singers as you have matured musically and personally through television, the media and scrutinized by the gaze of millions of people. How have you developed your creativity despite being in the public eye? Do you recognize yourself in your first performances
My creativity is always the same, and the best time to develop it is during my daily life. My songs come from ordinary moments such as the time I spend at home, driving my car or even travelling. But also, it quite improves when I’m on the move. That’s why I don’t believe that participating in contests like X Factor or Eurovision can influence my creativity – they’re just events that have happened in my life. These last few years in which I have taken the leap of singing on an international level, I have reached a great level of freedom by getting to know the music industry better from the inside. I have lived many things, and these experiences have enriched me.
In 2012, you released your first single, Fallin’ Rain, followed by a very cool but austere music video. What differences can you see between that young man who sang in a black and white video and today’s Mahmood?
I recorded that video with a friend at his house with his camera. We had a very small budget, so we couldn't do much more. From my point of view, the beginning of a music career is the perfect moment to find and understand what you truly want to do. Fallin’ Rain was a song I didn’t write, but now, all the songs and videos are the result of my own creation, my very artistic vision. I am currently much more focused when I get involved in a project.
Your songs have a strong autobiographical component, especially Soldi, where you reveal the story of your childhood, marked by the absence of your father. It seems that through your songs, you review your own history. Do you do it to reconcile yourself with your past or to break free from it? Have your songs had an impact on the personal relationships they describe?
My past is part of my present. All these experiences have made me who I am, and that’s why it’s important to not forget neither the good nor the bad. It’s necessary for me to understand what kind of person I am and who I want to be. Soldi, like Giuventú Brucciata, talks about a part of my childhood. Wanting to detach yourself from a part of your history, not accepting your roots, prevents you from focusing clearly on your future. Regarding my personal relationships, they have continued as they were.

You have always championed honesty in your work. Do you think that dedicating yourself to music and discussing your personal life in your lyrics entails giving part of your privacy away?
Telling my experiences through music has helped me to get in contact with people who feel very identified with what they hear in my lyrics because they have lived very similar situations. I want to think that this is a way to palliate loneliness and feel more connected with each other, so we can all understand that our lives don’t differ that much. It’s a way of connecting through our past.
How do you feel when revealing feelings as raw as longing or disappointment to the general public? Have you ever felt vulnerable?
My life is my strength. Once I’m in peace with the negative parts, I can include them in my songs. By writing and singing them, I show that I have the strength to tell them.
Throughout your career, you’ve surrounded yourself with renowned artists such as Marco Mengoni, Gué Pequeno, Fabri Fibra, Charli Charles or Sfera Ebbasta. What have you learned from your experiences collaborating with them?
All the collaborations that I have done have been very positive experiences for me. In Fabri Fibra’s collab, he believed in me when I wasn’t even famous. When we worked in the song Luna, it was because of his manager, with whom I had worked before – he put us in touch. I didn’t know he was going to be ready to collaborate, but when we met at the studio, he told me that he liked my music very much and that we should collaborate.

This past summer, you released the song Dorado, a collaboration with Sfera Ebbasta and Feid. How did this featuring come to life?
I wanted to mix the typical trap sound of Sfera Ebbasta with the Moroccan pop style that characterizes me so much. In addition, I wanted to include an artist who could sing in Spanish. Por fa by Feid was a song that I fell in love with as soon as I heard it. That's why I asked my record company if they could offer him to participate in this featuring. We got in touch through Instagram, and from our enthusiasm, Dorado was born.
Dorado is the first song you release in Spanish. What led you to take this step? Do you plan to launch more in this language?
I really like Spanish music. During these last years, I have listened to multiple artists like Bad Bunny or Nathy Peluso. I wrote Dorado together with an extremely talented Spanish artist, Sen Senra, the author of the ballad Ya no te hago falta. I think Italian and Spanish sound very similar but they are not the same – that’s why it was a sort of challenge to write the song. Plus, I was dying to write something in another language
If we could take a look at the songs you’ve listened to the most lately, would we find any by Spanish-speaking artists?
Yes, of course. For example, I really like Nathy Peluso’s Corashe; I’ve been listening to her a lot lately.
Dorado seems to talk about money, a recurring theme in your songs, and this time you take the opportunity to reflect on your origins and dreams of achieving success. What dreams does Mahmood still have to fulfil?
Dorado is not exactly about money. This song is about a dream, a parallel world. It begins with me talking about my reality in my room, and then goes on to a dreamlike experience built over diamonds and glitter. The meaning of the song is that material wealth is not the most important thing in life. Inner richness, the one related to emotions and their depth, is what really matters. In the video, through certain Egyptian symbolism, I try to make a reference to my origins, to the roots of my identity.
Regarding my dreams, I would like to start doing concerts outside of Europe. Last year, I travelled to many European countries and many cities. In Spain, for example, I performed in places like Madrid, Barcelona and even Toledo. Now, I would like to be able to cross the ocean and be heard in areas where I have not yet been heard.

Dorado has an unexpected protagonist – Bugs Bunny, who appears on the cover of the single surrounded by jewels. How does this well-known cartoon relate to you and what this song means?
I’m a big fan of cartoons and anime. I always try to include some. On the first cover of Giuventú Brucciata, I wore a shirt with a Pokemon on it. But in this song, Bugs Bunny, who always moves around very peculiar situations, serves as a reference of how I have felt the last year. I have gone from being at my mother’s house to participating in Eurovision, doing concerts in London or attending fashion weeks. All that dazzled me, as if it were a golden world – an incredible and strange world for me. In this case, I wanted to add many necklaces and jewellery to Bugs Bunny since, like me, he is now also dotted with that golden world.
While many classify your music as R&B, you describe it as Moroccan pop. What and who are your creative and musical influences?
During my life, I have listened to a lot of R&B, pop and Italian music. When I was little, my father made me listen to a lot of Arabic music. His favourite singer was from Morocco, and all that is reflected in my style; that’s why I call it Moroccan pop.
Your music videos are very elaborate pieces of work whose backgrounds are built on metaphors. In Soldi, we can see an old man tattooing a snake on your back; in Rapide, you sing about a turtle, and in Urakami, you walk next to a wall where graffiti says ‘If you don't take that long, I’ll wait for you forever.’ Are the videos an open door to your head?
I believe videos always have to complement the songs, which is why in Dorado there are many metaphors – not only to increase the song’s meaning but also to reflect my visual taste. Music and image must walk at the same pace.

You starred in Burberry’s latest Christmas campaign as well as attending London and Paris fashion weeks. And on your Instagram, we’ve seen you wear clothes from well-known firms and emerging designer. What is your relationship with fashion? Do you consider it an important part of your figure as an artist?
I love fashion. For me, it’s like a game. It can be an important tool to highlight the image of an artist, to make it grow. But fashion should never bury the essence of the artist, drown him, cover up his message or his/her identity. There is a person behind every outfit. In my case, I will never take off my earrings since they are something of my very own; they’re part of my personality, and they are later complemented with the outfits.
If you could go back before fame knocked on your door, what advice would you give to yourself?
Always make time for your family and friends.
Gioventú Bruciata, your first album, was a hit. Can you tell us something about the next one? What can we expect from it?
I don’t want to reveal much. I can only say that it will be much more rhythmic and it revolves around a new concept that will be present throughout the entirety of the album.