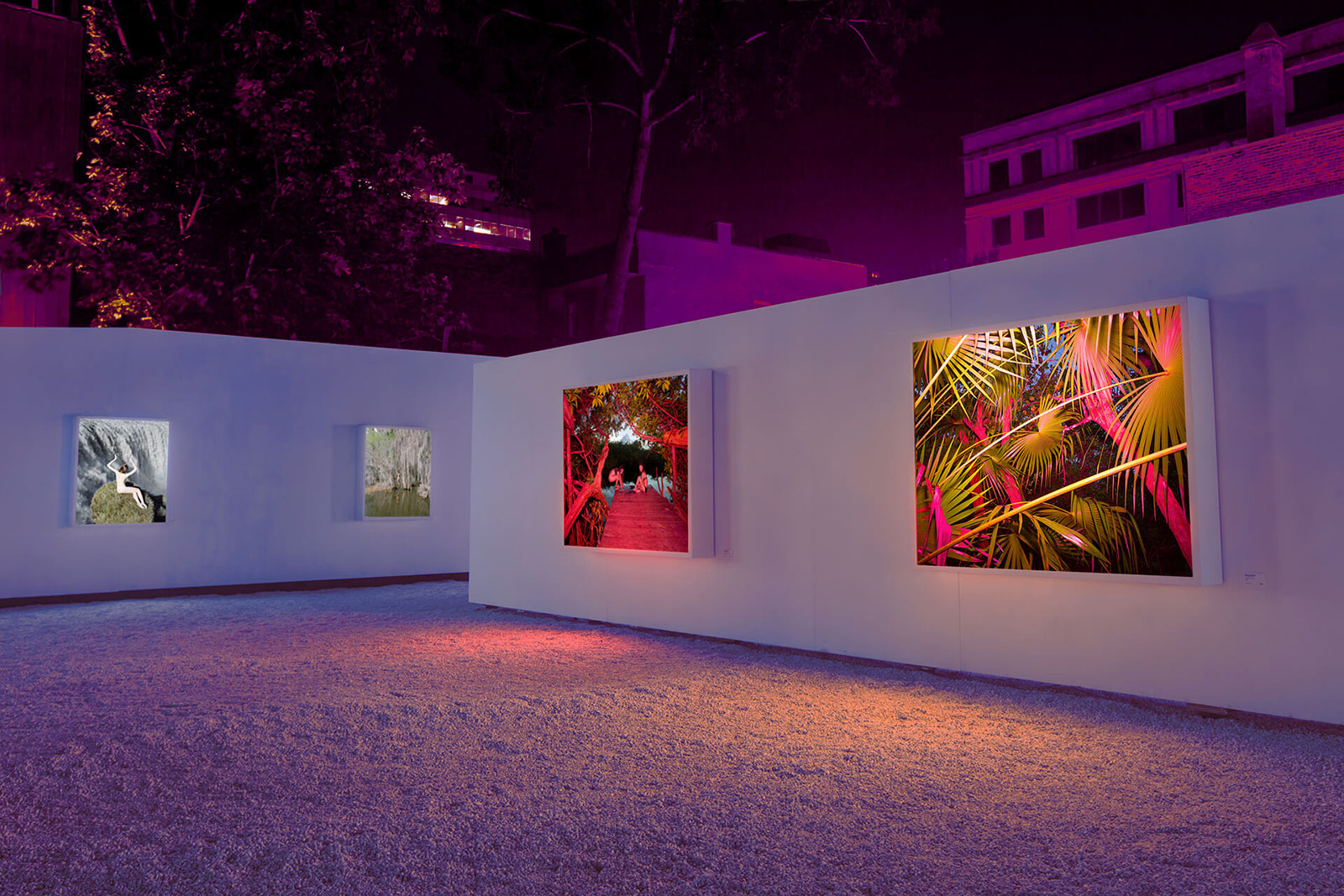 Galerie Blanc (or White Gallery) in Montreal revolutionizes the usual approach to art and its appreciation. The original white installation, notable for its purity and simplicity, provides a museum-worthy backdrop for displaying artworks. At the same time, natural surroundings remind the visitors that this definitely isn’t a conventional space. The gallery’s co-founder, Alexandre Berthiaume, and its curator, Nicolas Denicourt, tell us everything about this untraditional concept.
Why did you decide to call it the White Gallery?
Alexandre: To tell the truth, the white colour is definitely the leitmotif of the whole project. Our initial goal was to find an honourable way to exhibit artworks in an urban environment. Public spaces are often visually and emotionally cacophonic, so why not borrow an element from the common art exhibition places and their interiors? That’s how we came up with white. The white gallery becomes a source of confusion and amazement.
Where did this idea to create a gallery in open air come from? In what ways do you think it is beneficial for spectators?
Alexandre: Obviously, urban art, which should be easily accessible and free, is absolutely necessary and characterizes the society. It contributes to the richness of the urban life and promotes artists at the same time, so it’s a win-win situation. The gallery was mostly financed by SDC (Society of Commercial Development), which represents the neighbourhood’s businesses. One of the gallery’s missions is to bring crowds into this sector.
The concept of the white gallery is special because it’s a public park and a gallery at the same time. While playing with this dichotomy, we wanted to trouble the common perception of what is considered to be interior and exterior. Of course, when you are in the gallery, this white place envelops you and you feel as if you are in an interior space. But the nature is also present. As the gallery is open at all times and during all seasons, it is constantly changing and provides absolutely different experiences, depending on the weather. 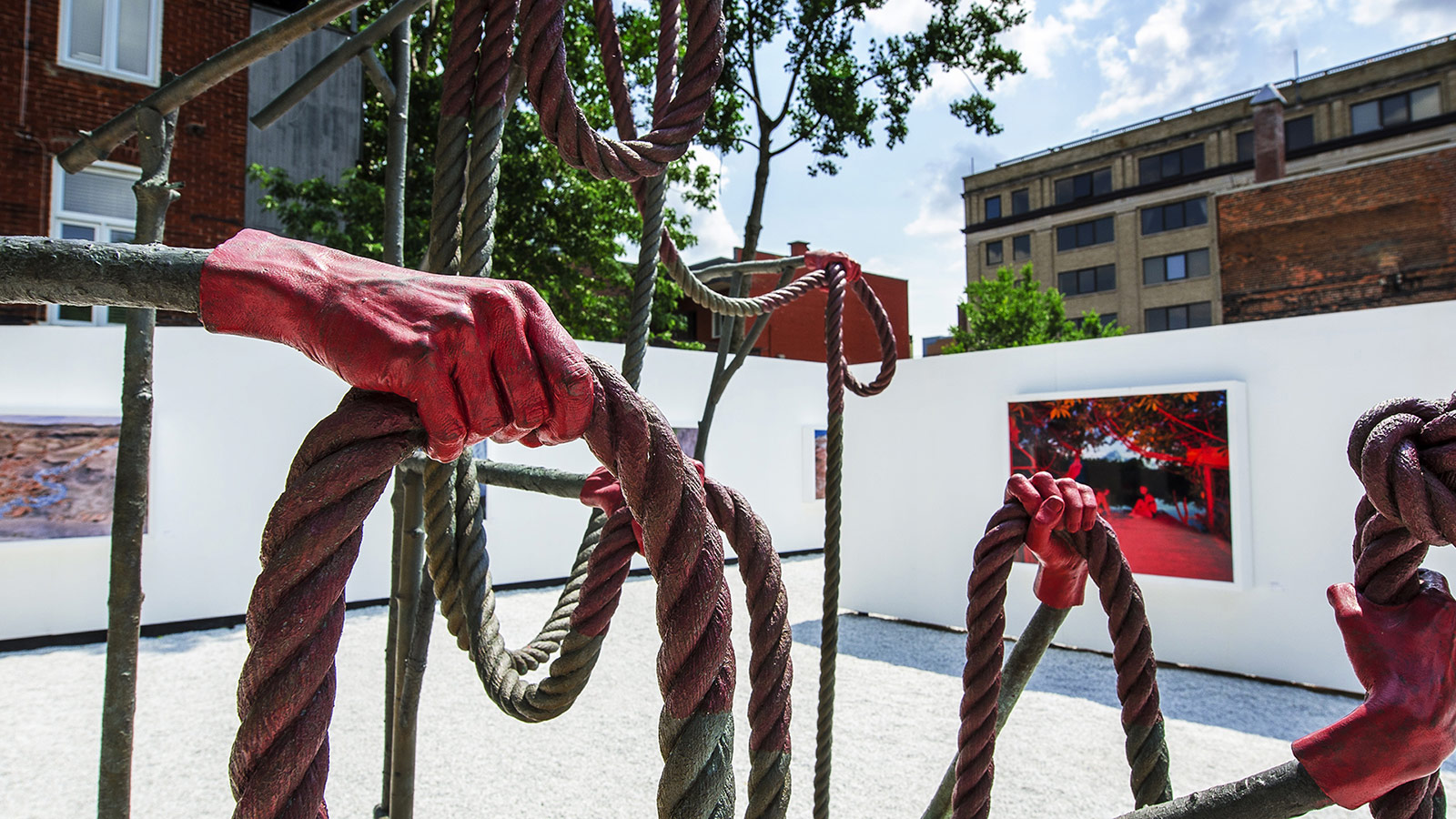 The very first exhibition assembles artworks from Delaney Allen, Benoit Paillé, Synchrodogs, and Valérie Blass. Why did you choose these artists and what is the main idea of the first display?
Nicolas: As Galerie Blanc is in open air, for the first exhibition I wanted to present artists who draw inspiration from nature. My intention was to transport visitors on a special journey, balancing between reality and imaginary worlds, including very colourful works that remind of the surrounding neighbourhood. It was also important for me to include at least one or two local artists. I have been working with Benoit Paillé for some years and the idea of showcasing his works in a light box display was in my head for some time. It was a perfect timing.
Modernism, space’s purity, minimum resources, art promotion, stimulation of all senses, the important role of the surrounding environment; your project is very ambitious and has many elements to take into account. Did you have a goal to seduce even those who are not interested in art?
Alexandre: Definitely! The gallery is located in the most touristic street of Montreal and in the very heart of the gay neighborhood. The crowds couldn’t get any more varied. Personally, I wanted to awaken the public’s interest in contemporary architecture. Its presence in this city is very limited; cultural installations are very earth-related: a lot of raw and recycled materials are used. A modern and minimalistic project couldn’t pass unnoticed. So it’s the nature of the gallery that acts as an alluring invitation to discover its contents. Nicolas’ commissions did the rest to seduce visitors.
In your opinion, what kind of role do galleries play in the age of Instagram? Are they still attractive or maybe their concepts need to be completely reinvented?
Nicolas: These days, artists are more and more capable of representing their art without the help of galleries; different platforms – which facilitate selling – and social media have completely changed the ways in which artists used to promote their work. However, being an artist implies a lot more than just creating and sharing on Instagram. As I work as an agent, I understand quite well all of the implications: interacting with clients and filling out the grants takes up an enormous amount of time. If artists are supported in these processes, they can concentrate on what they do the best: create! It’s true that galleries have to adjust to new technologies and platforms of diffusion but I don’t think that social media could replace the work of a gallery manager. 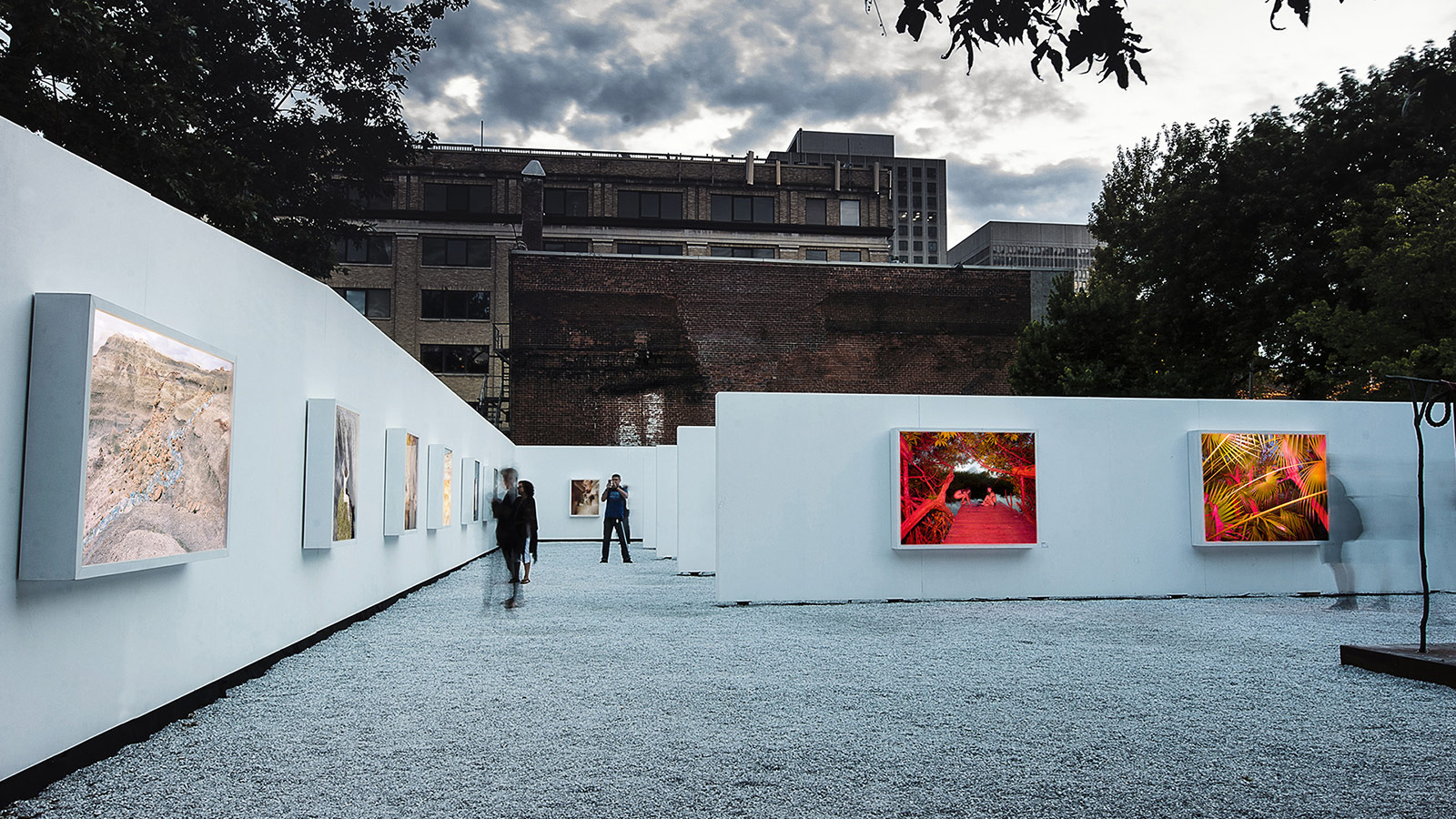 I feel an obligation to discuss technical aspects: how do you secure art works in your gallery? And how does this ambitious and original concept actually work in reality?
Alexandre: The whole gallery is composed of bespoke elements. One of the challenges was to have retro-light casings. While such things for public spaces do exist, their aesthetics and functions are heavily related to publicity; therefore, a very big effort was put into creating unique casings. The space had to be resistant to any sort of vandalism (scratches, graffiti, etc.). The fact that we managed to hide practically all of the elements and preserve a minimalistic face is a big success.
Talking about the art itself, one of the advantages of showcasing photography is that we display reproductions that can be easily replaced, but there hasn’t been a necessity for that yet. In addition, everything is painted and in a case of graffiti, it could be hidden. However, to our big surprise, such things don’t happen. It seems that the project is very appreciated in the neighbourhood – some sort of mutual respect has formed from the very first days. In reality, the gallery is very peaceful. Visitors adopt an attitude similar to the one required in museum visits: they speak in a low voice and behave politely.
On the other hand, in the evening, the space and all of its colourful elements become a magnetic pole. Even if the majority of visitors remain calm and wise, we have seen some party animals as well. They climb the walls, try to sit on the frames, forget their things, etc. One thing is certain: this place doesn’t leave anyone indifferent. It’s also important to know that this project was developed in close collaboration with Montreal police. Approximately eight propositions were necessary in order to make sure the gallery is safe.
One of those factors was the permeability of the place: the police have to keep the gallery under surveillance without entering. It was precisely this obligation that complicated our initial wish to preserve the duality between interior and exterior. Another big challenge was to make this gallery happen while respecting modest budgets. As it was an unusual proposition, it was considered to be a trial project. While this also imposed some technical restrictions, the main idea has remained untouched. As we have succeeded in proving our concept, the future seems to be very promising.
What kind of exhibitions do you plan for the future?
Nicolas: We had a great pleasure to notice that people of different generations find something of interest in the first exhibition. I saw little kids fascinated by Valérie Blass’ sculpture and older people having a long discussion in front of a photo by Synchrodogs. Our mission will be to continue surprising, educating, inspiring, provoking emotions and debates. We would also like the gallery to become an institution for the city, with conferences and workshops. We want to collaborate with schools so that children can interact with the artists or even exhibit their own works in a dedicated space. 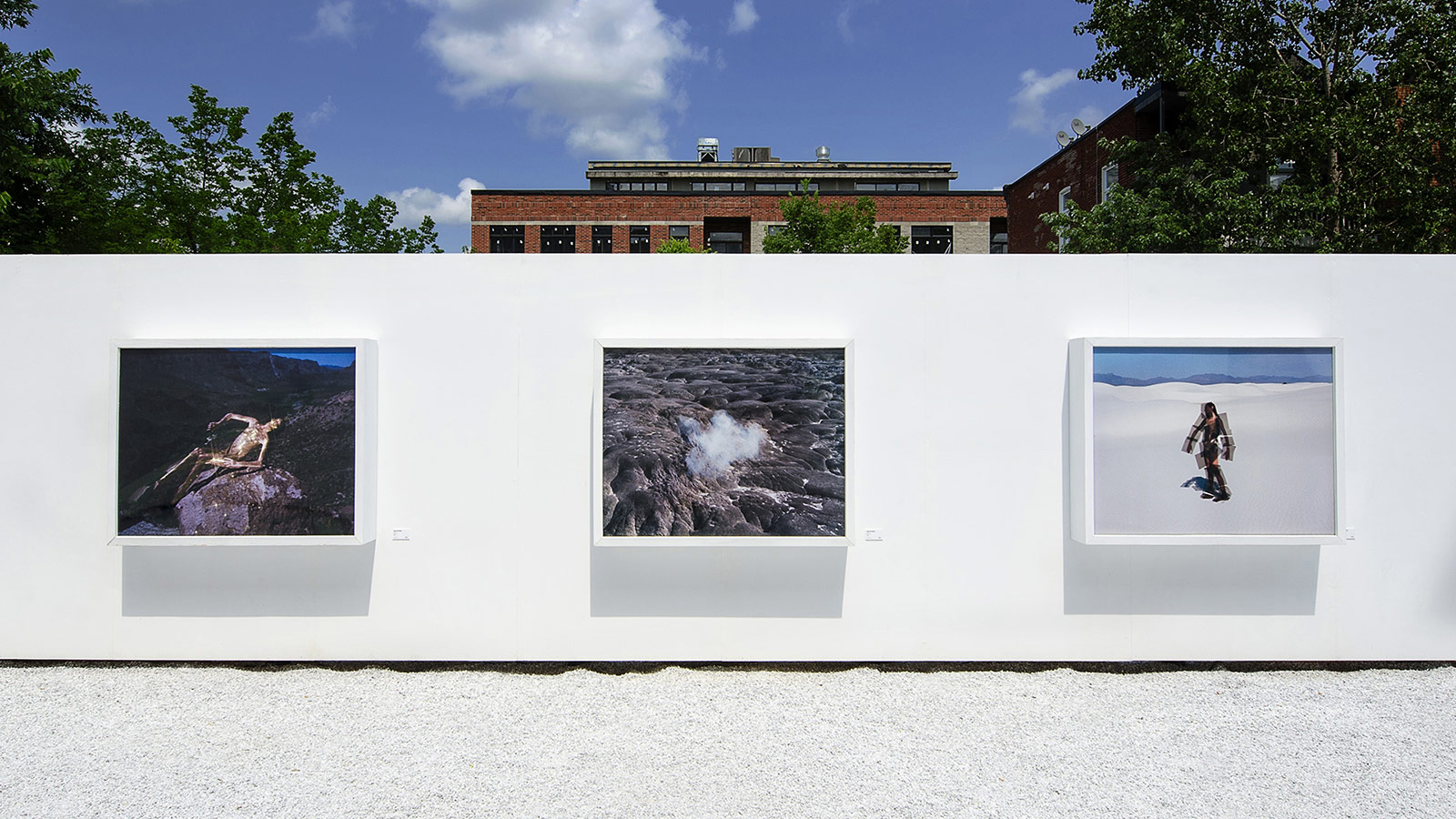 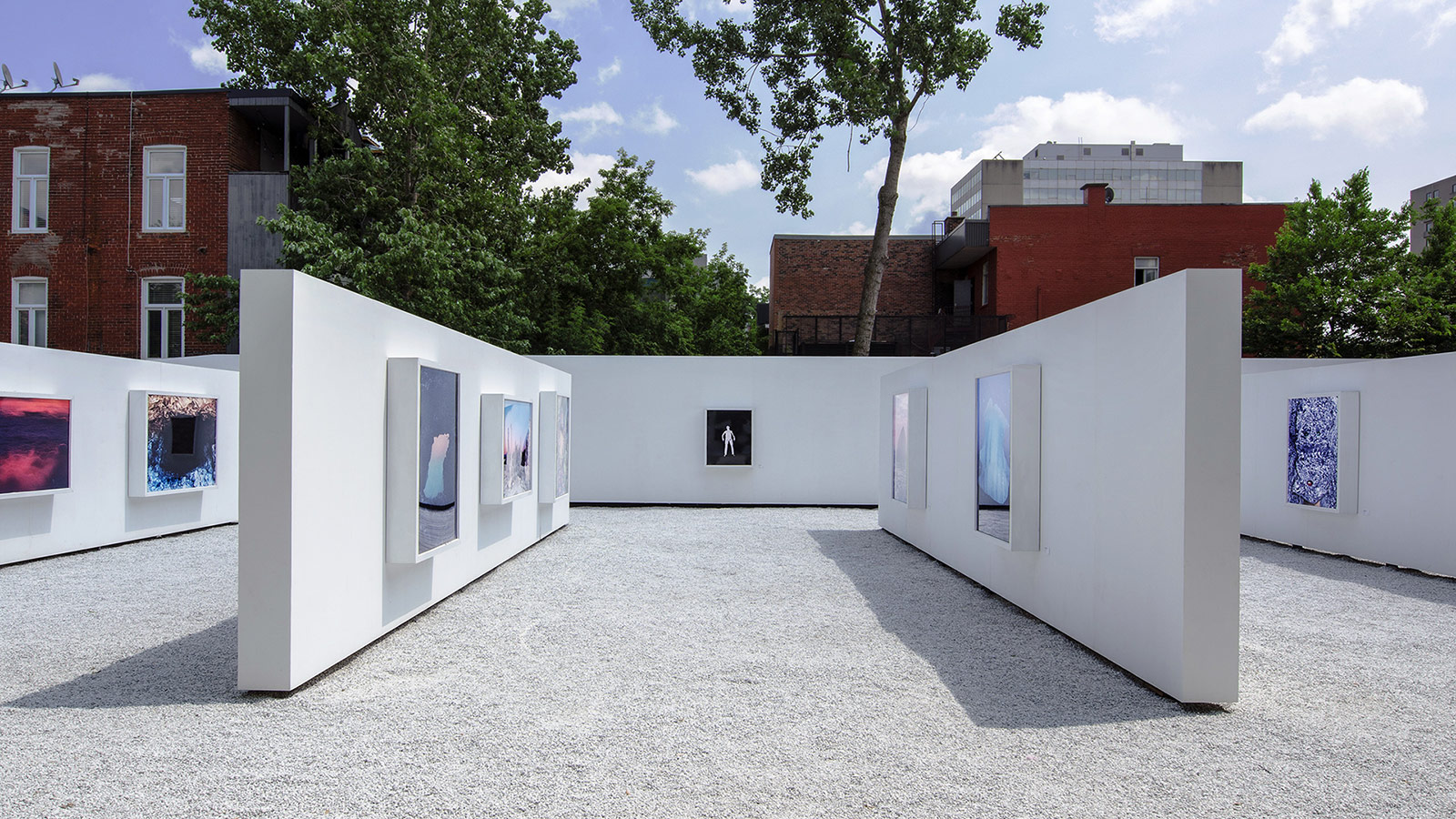 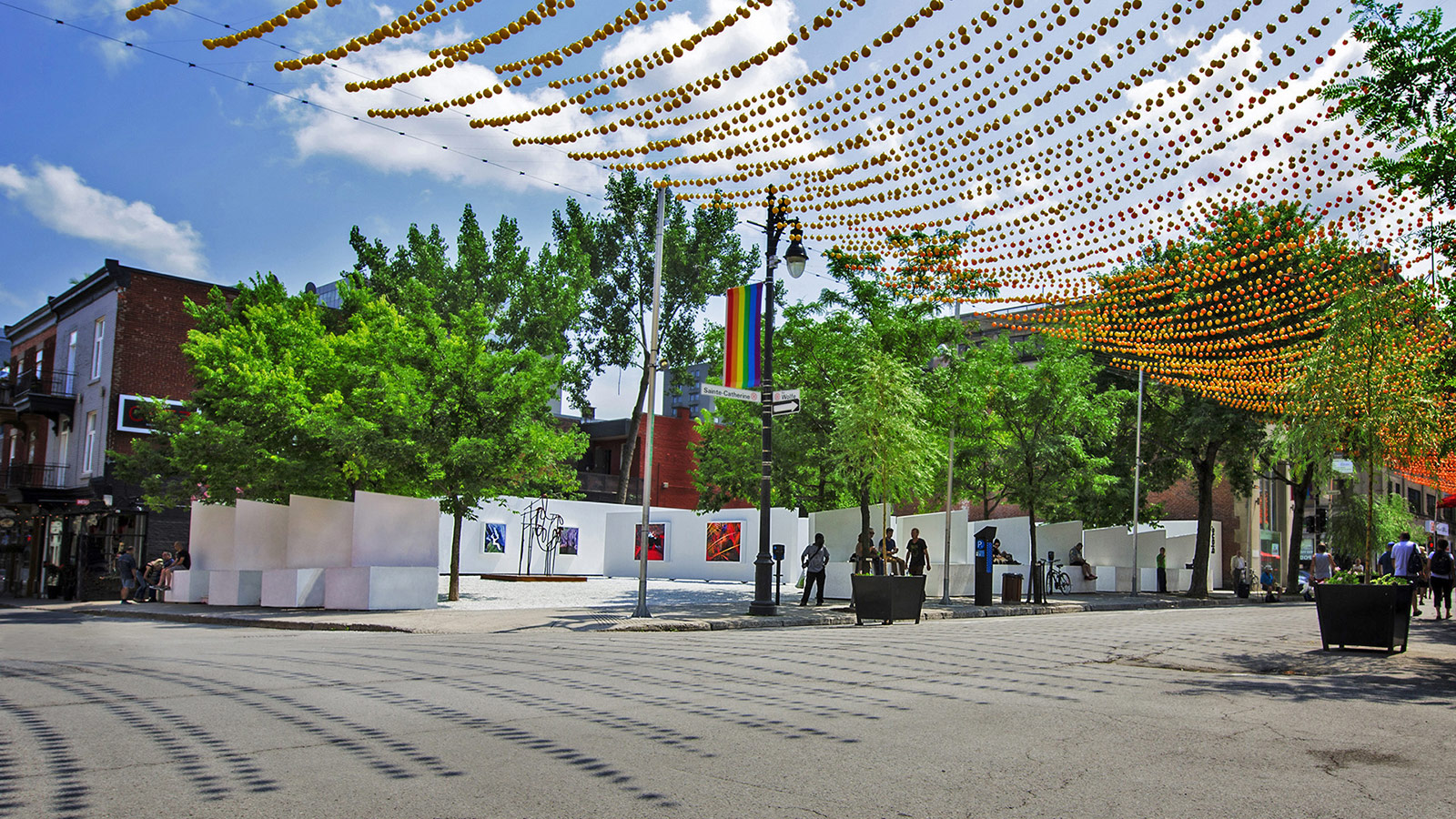 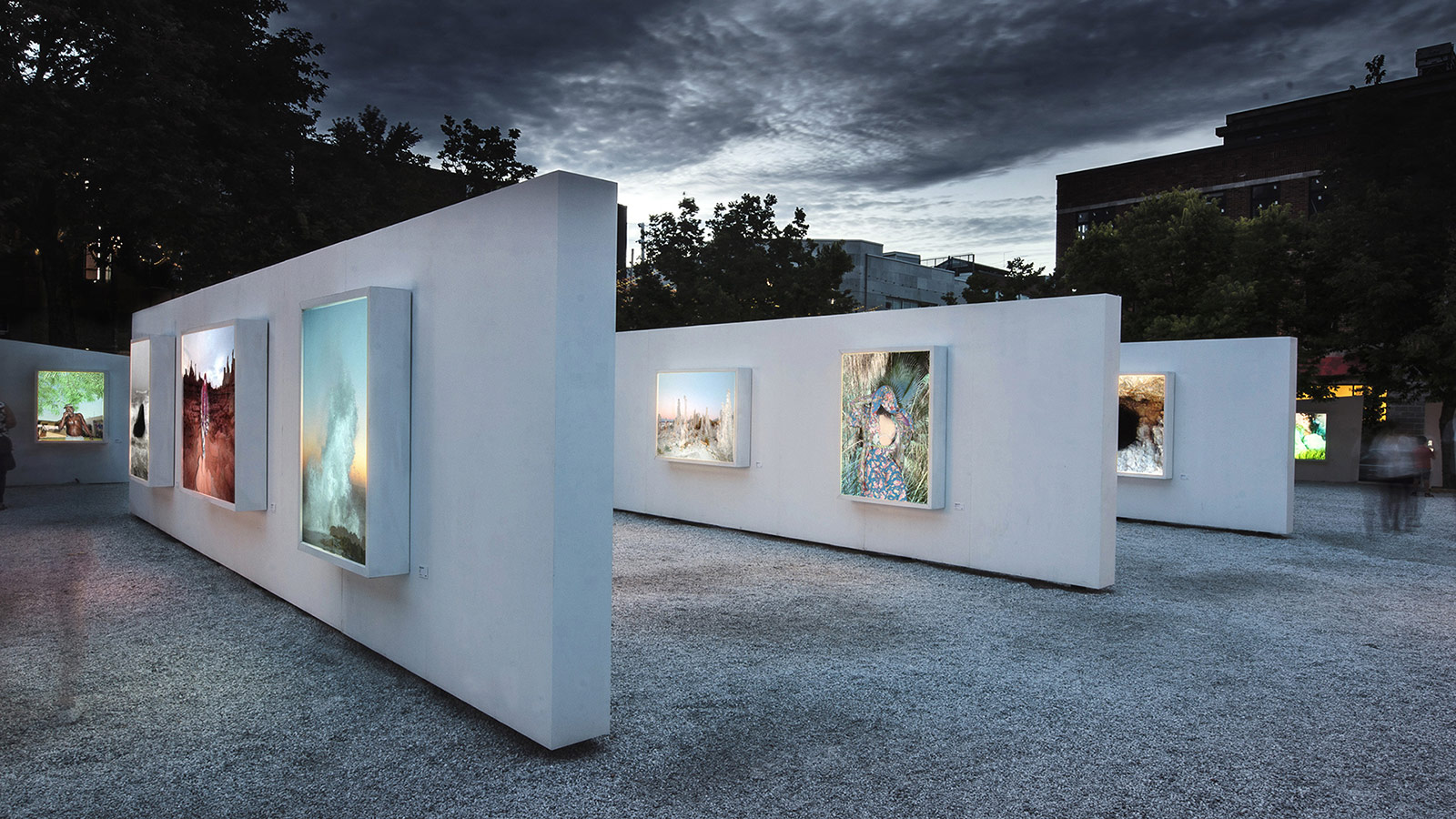 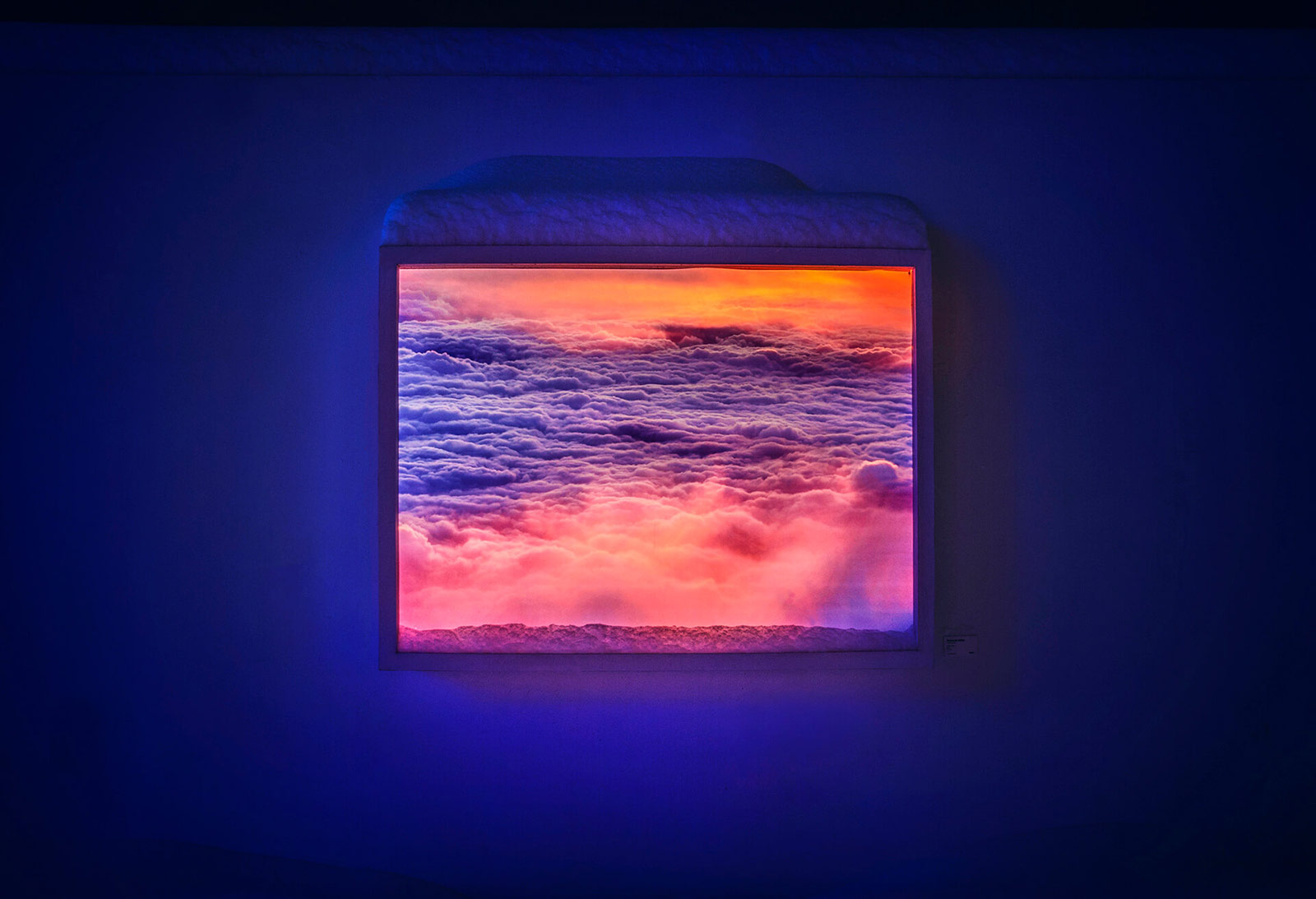 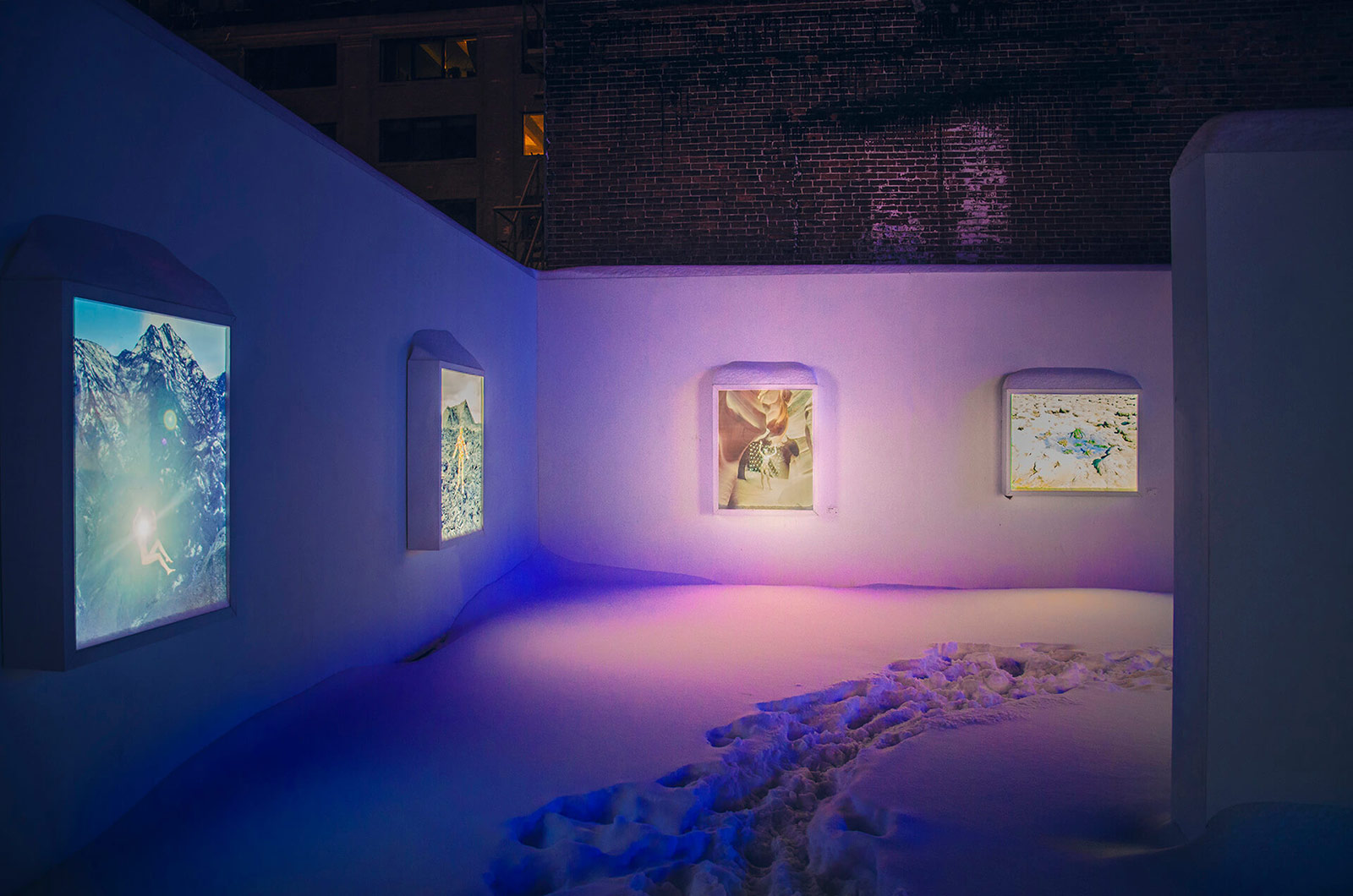 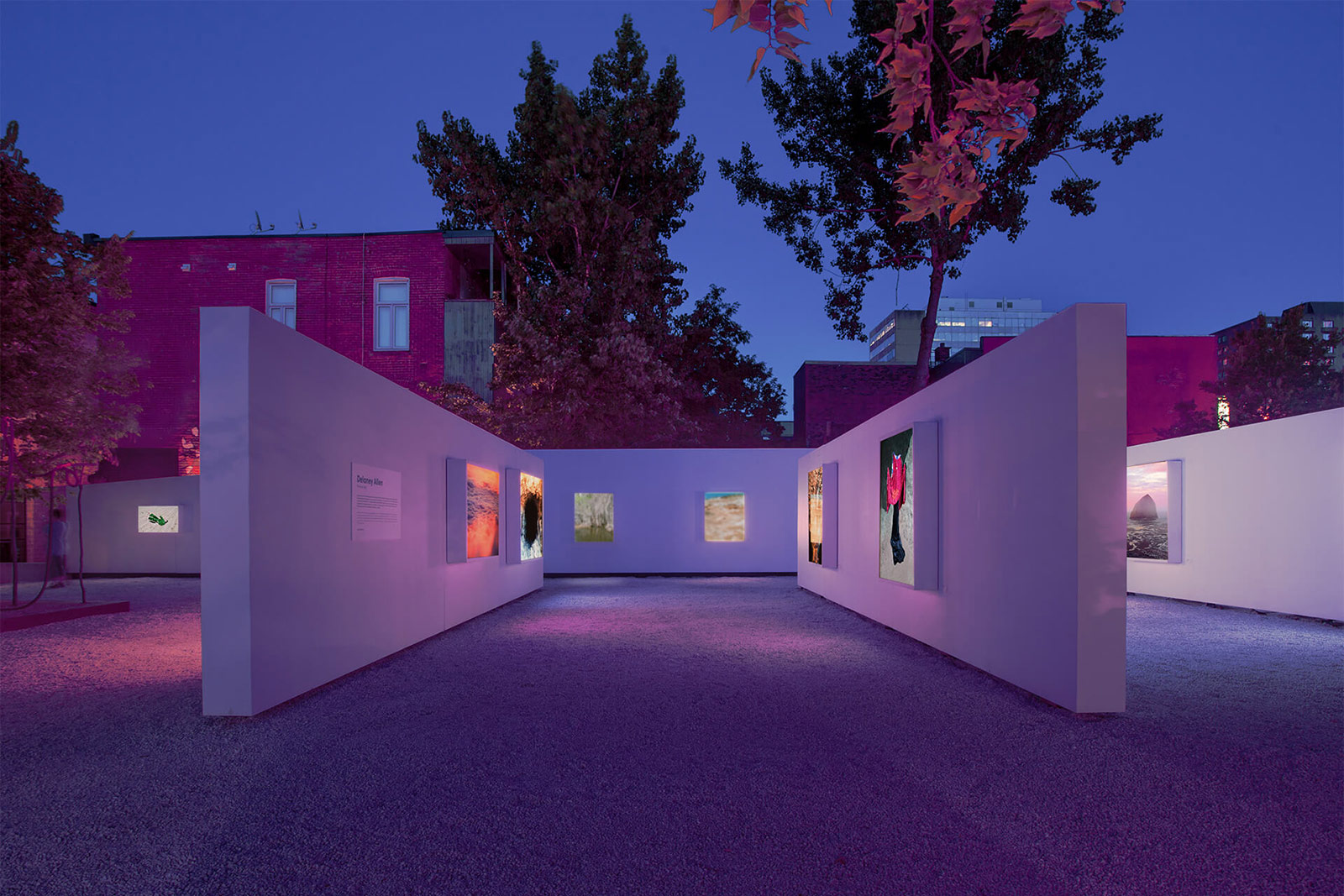 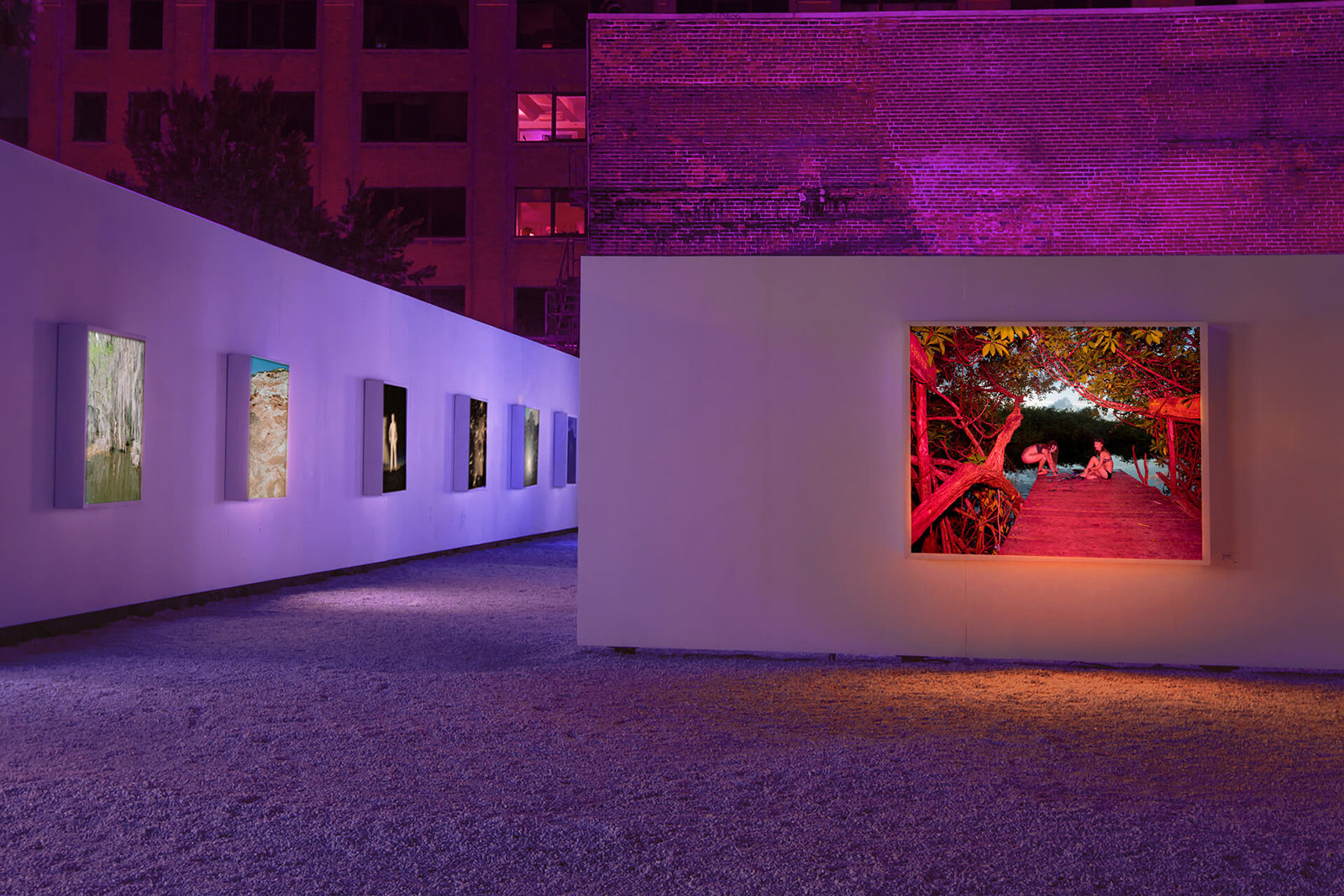 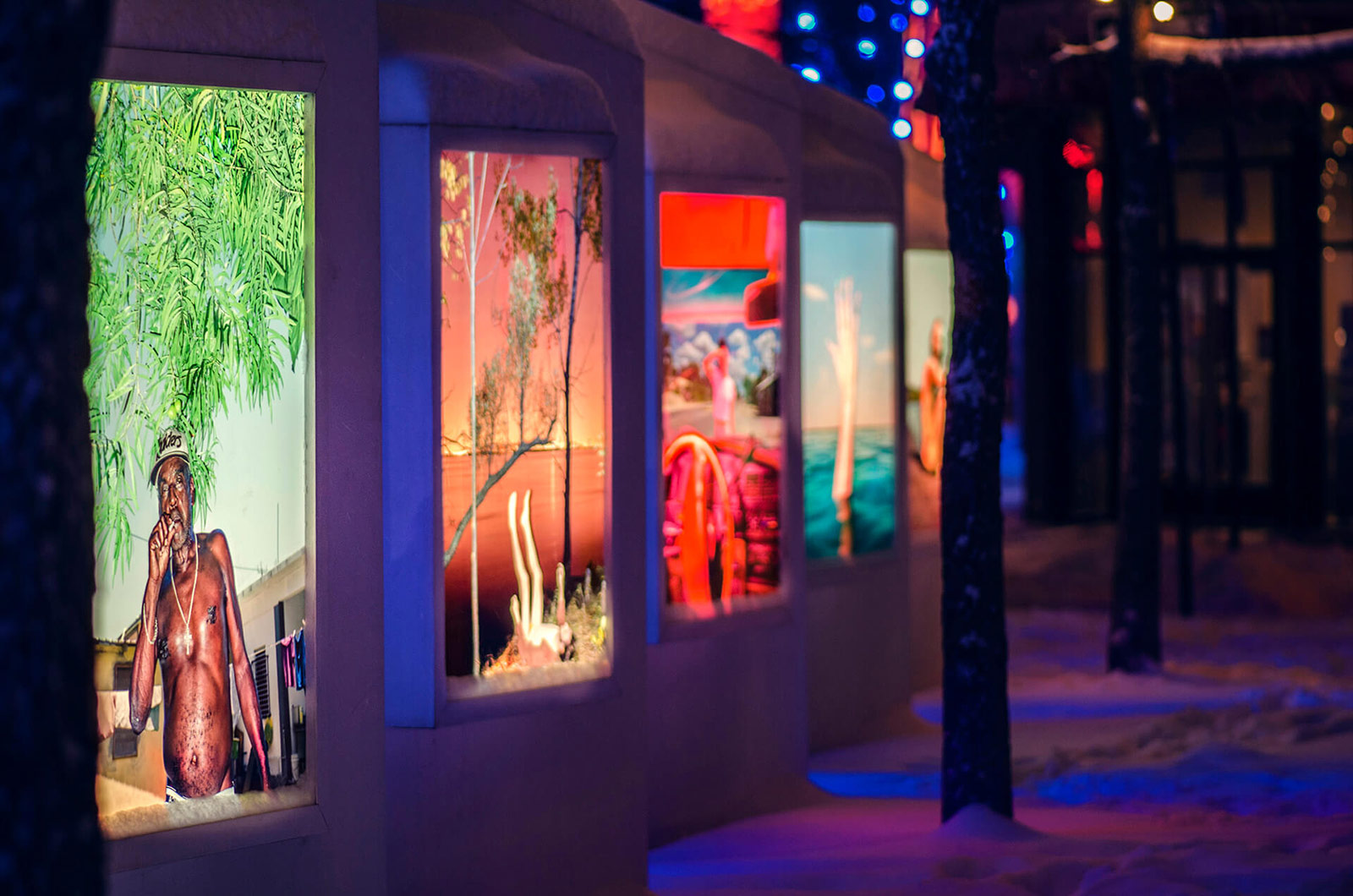