Doing her own thing 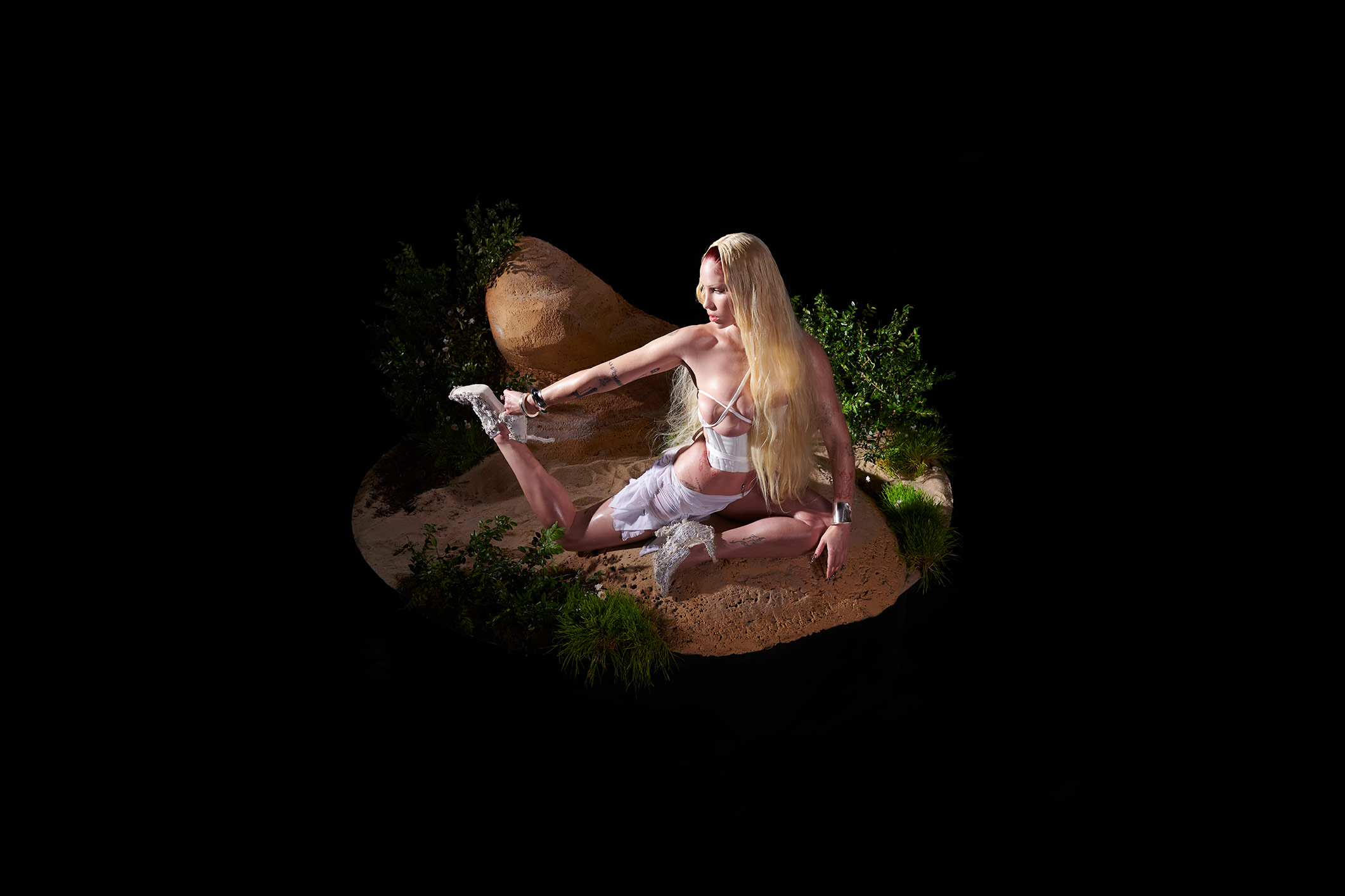 She learns something new about herself with each song, and she's not worried that life is going slower now. Eartheater perfectly embodies the versatile artist of the new generation, being a multi-instrumentalist, songwriter and vocalist. An ambassador of creative freedom whose sound is torn between abstraction and lucidity, who has made Phoenix: Flames Are Dew Upon My Skin, her latest album, a dream come true. Emotional metaphors, connected to a fantastic nature, are part of her speech and her lyrics. Her goal for 2021? Become better.
She is not a newcomer to the music industry, but her new work means a new stage in her career. A rebirth that, according to a large part of her audience, allows you to reconnect with your adolescence. Phoenix is the result of the emotional and romantic experiences the artist - whose real name is Alexandra Drewchin- has lived first-hand, known in the music scene for not being afraid to experiment, and not being influenced by others’ opinion. “Frankly, over the years I can see that often when people waste their breath criticizing me, it's because they're either jealous, threatened, or secretly obsessed,” she says. And that identity is what keeps her active and stronger than ever.

Alexandra, the last time we talked was in 2019. At that time, no one could have imagined what a pandemic or being confined for months meant. And now, it seems to be part of the new normal. How do you feel at this moment?
I’m chilling.
There are those who predicted structural change imagining a post-pandemic utopian world, and ended up realizing that nothing would be that different. Others persist in their desire to make the world a better place. How do you think this turning point in history will affect the near future?
People imagined a post-pandemic utopian world? I think that the collective K-hole is expanding.
And what about music? Will it change forever?
Music is always changing.
It is precisely in music that many people have found a refuge during these difficult months, whether introspective songs or energetic soundtracks that invite you to get up from the chair and dance. Which music have you listened the most in 2020?
My roommate has an amazing vinyl collection, so I’ve been enjoying listening to his records. It forces me to listen to an album all the way through. Otherwise, I’ve been listening to Tokischa, Cibo Matto, Astrud Gilberto, Mecano, The Cranberries, Sexyy Red, Celia Cruz, Vanessa Daou, French Montana, Hood Celebrity, Queen Ladi Gangsta, Hook, and many more.
Just a few weeks before the pandemic hit the world, you walked for Mugler, who also played your song Supersoaker. And since then, you seem to have not stopped working on your music. Has your creation process changed throughout these months? Have you been creating non-stop, or did you have any break to get away from everything?
I’ve taken a break from making new music while celebrating Phoenix as it’s not even half a year since the drop. There’s a lot of work with that: shoots, online shows, interviews, etc. I’ve been working on three new videos for Phoenix. They will start coming out soon. Everything is moving slower, but I don’t mind. The last two years were so crazy for me. I’m also opening up old projects that I’ve had to put to the side while pumping out Trinity and Phoenix and touring. I love opening a project that’s had time to gestate.
As you said, you unveiled your fourth album, Phoenix, Flames Are Dew Upon My Skin, in October 2020. And it is composed, produced and arranged entirely by you. If you had to define it in one sentence, what would it be?
Phoenix is a young gummy stone. A young stone is thousands of years old.

Something that catches my eye is that this album was mostly composed in Zaragoza (Spain), during a ten-week artistic residency. A period in which you connected with loneliness and nature to immerse yourself in your inner world. What can you tell us about this experience?
I had only dreamt of having this kind of opportunity in the years leading up to it. I made all my previous albums in my bedroom, so this was the first real studio album. I had access to a gorgeous studio 24/7. I also had access to a group of talented classical players studying at the conservatory in town. They were all girls in their late teens and early twenties. It was an absolute dream come true. The nature was very scorched and yellowish orange. I played with lots of baby goats and rode through the desert on the back of a Kawasaki for miles and miles. This all ended up in the music.
If we compare it with your previous work, we see that your sound becomes more intimate, classic in a certain way. Sound experimentation, one of your identity traits, gives way to guitar chords and a voice. What other differences do you notice compared to your previous albums?
I feel like Phoenix is the album I dreamt of making when I first started writing songs and playing guitar when I was a teenager. I waited a long time because I had to have a lot more emotional and romantic experiences. I waited patiently for a dragon egg to develop inside. Dragon eggs take at least 10 years to grow and incubate before hatching.
In How To Fight, one of the most direct songs included on Phoenix, there is a distillation to the essence, both in the sound and in the video. "I’ve learned by now that my strength has been forged in the fire of pain," you sing. What has changed since you first started making music, or what else have you learned since then?
I’ve learned to not be afraid of my sexuality, and to digest all the substances I consume inspirationally and break it down into something that is so honest that I learn something about myself in writing every song.

“Find romance in the trash, something that lasts,” you say in Volcano, while the sound floods everything, making our hair stand up. Are you more interested in the immediate and fleeting, or what endures in time forever?
In that lyric I’m suggesting that what we think is fleeting actually is around forever whether we ignore it or recycle it or re-purpose it. Nothing just disappears. Someone’s trash can be someone else’s treasure.
You have said you have relaxed in Phoenix, coming to define it as “emotional.” And there is no doubt that it is perfect for right now. How has your audience responded to this new album?
It means so much to me that people feel so much from this album. I’ve heard many times that this album makes people feel like a teenager again. I get such moving messages every day from my fans. Some people share very intimate stories of how the music has saved them or held them. Many people have told me how Phoenix has calmed their suicidal thoughts. Volcano is very much about overcoming suicidal impulses. “Pulling the plug could be the ultimate anti-drug, but I’m addicted to this life”. Pitchfork thought that it was a song about unrequited love… like it’s very obvious what the song is about. And also I’ve never had unrequited love.
"I don't give a damn what other people say right now," you commented in a previous interview. What was the process like getting to that point?
I guess life continues to reward me when I do my own thing and think for myself. Frankly, over the years I can see that often when people waste their breath criticizing me, it’s because they’re either jealous, threatened, or secretly obsessed. If you don’t like it, mind your business.
From Tony Stelzer to Acemo, Dadras or Color Plus, Trinity, the mixtape you released in 2019 features numerous collaborations. Do you think collaborations with other artists are an inherent part of music? What are the advantages of this way of creating?
I don’t think that collaborators are inherent, I’ve done the majority of my work on my own. Collaboration is gorgeous and so fun if it’s with the right people, though. If it’s with the wrong people, it’s hell. I don’t really collab with anyone unless we’re friends and I know them IRL, or unless I really really respect their work. I’ve been friends with those producers from Trinity for years. Most of us lived walking distance from each other
And in terms of aesthetics, how important is visual artistry in your work?
The visuals are very important. They need to take your breath away. The visuals need to incite curiosity to want to hear the music. The visuals need to suck you in.
What do you hope for most in 2021?
I want to become better. 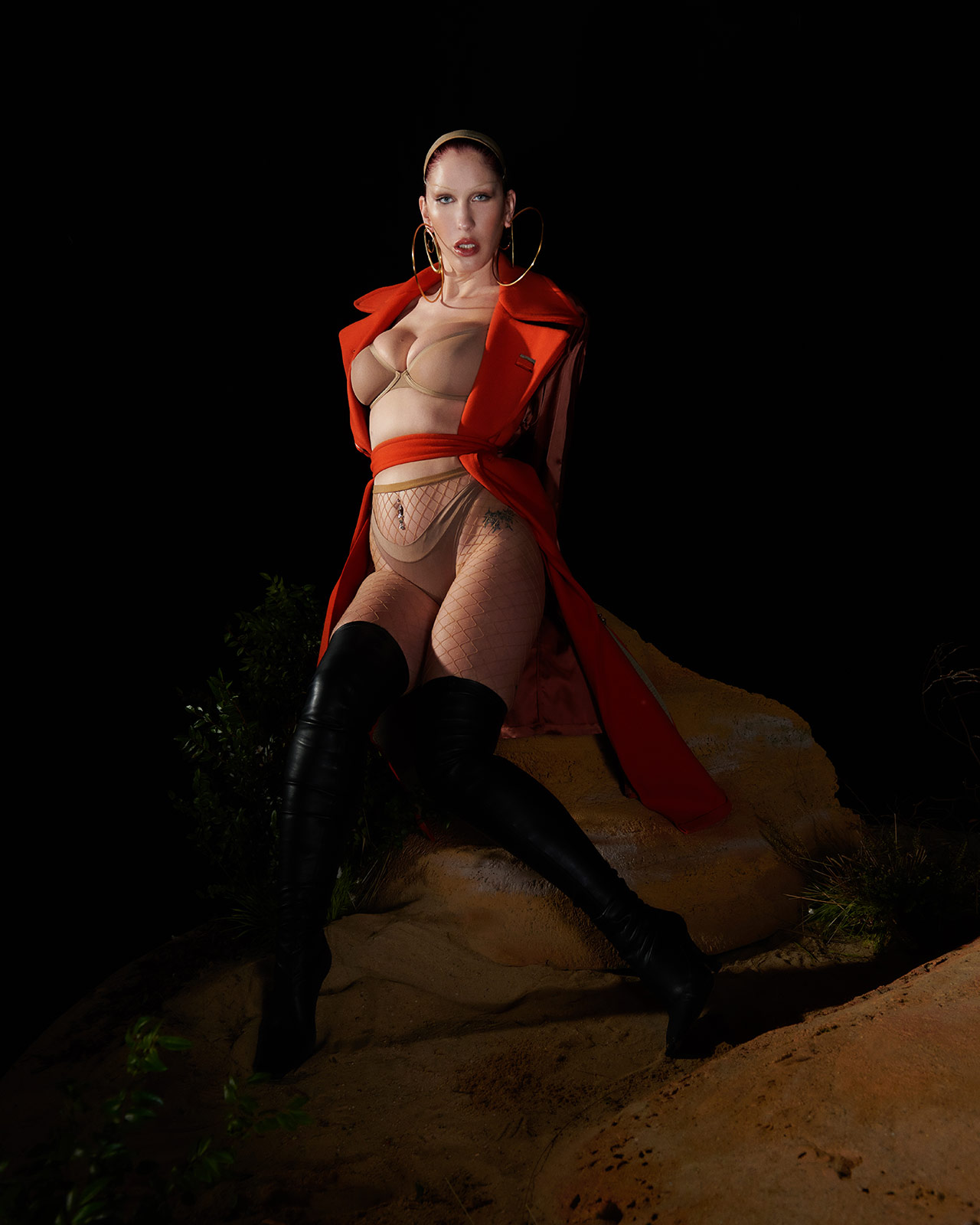 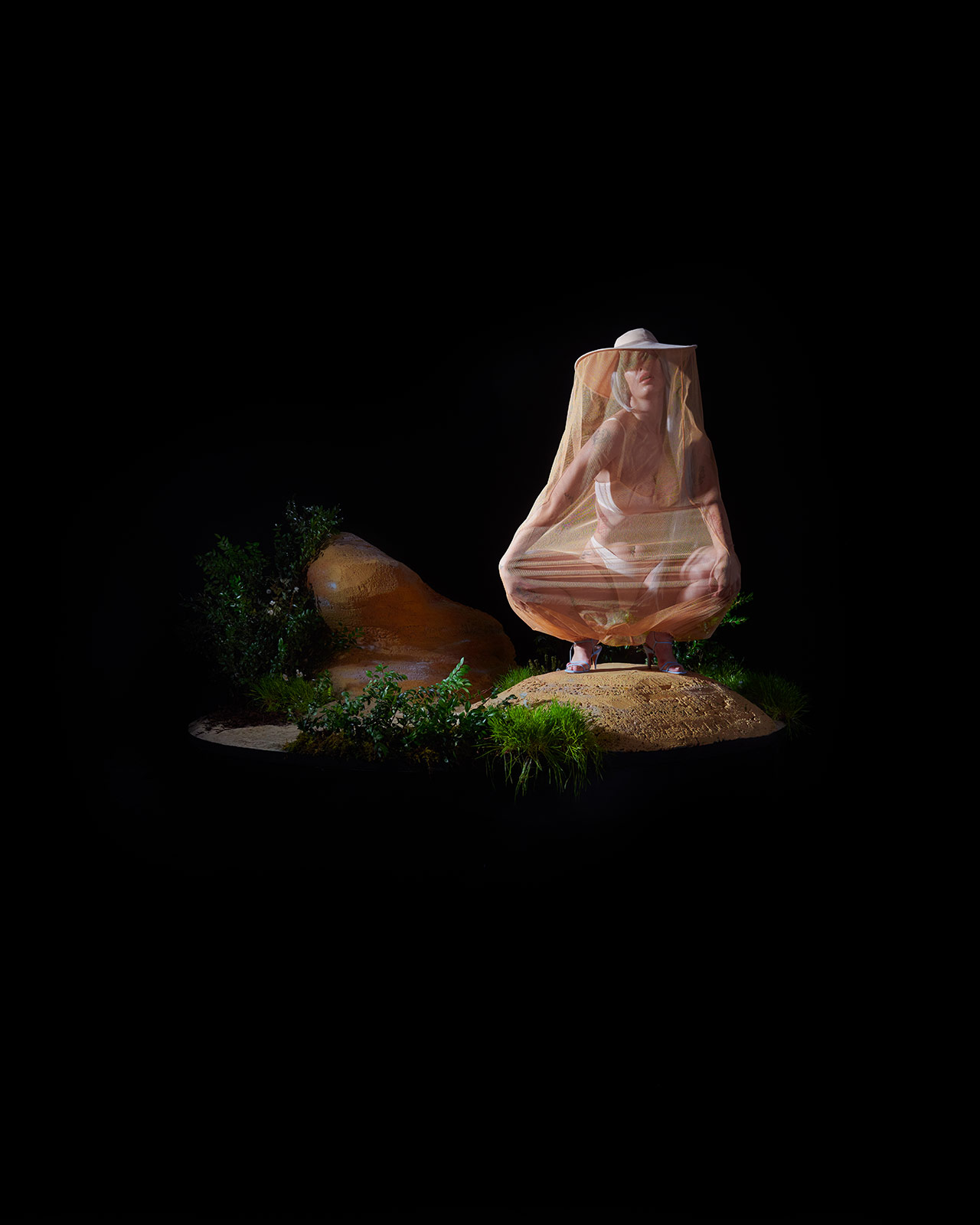 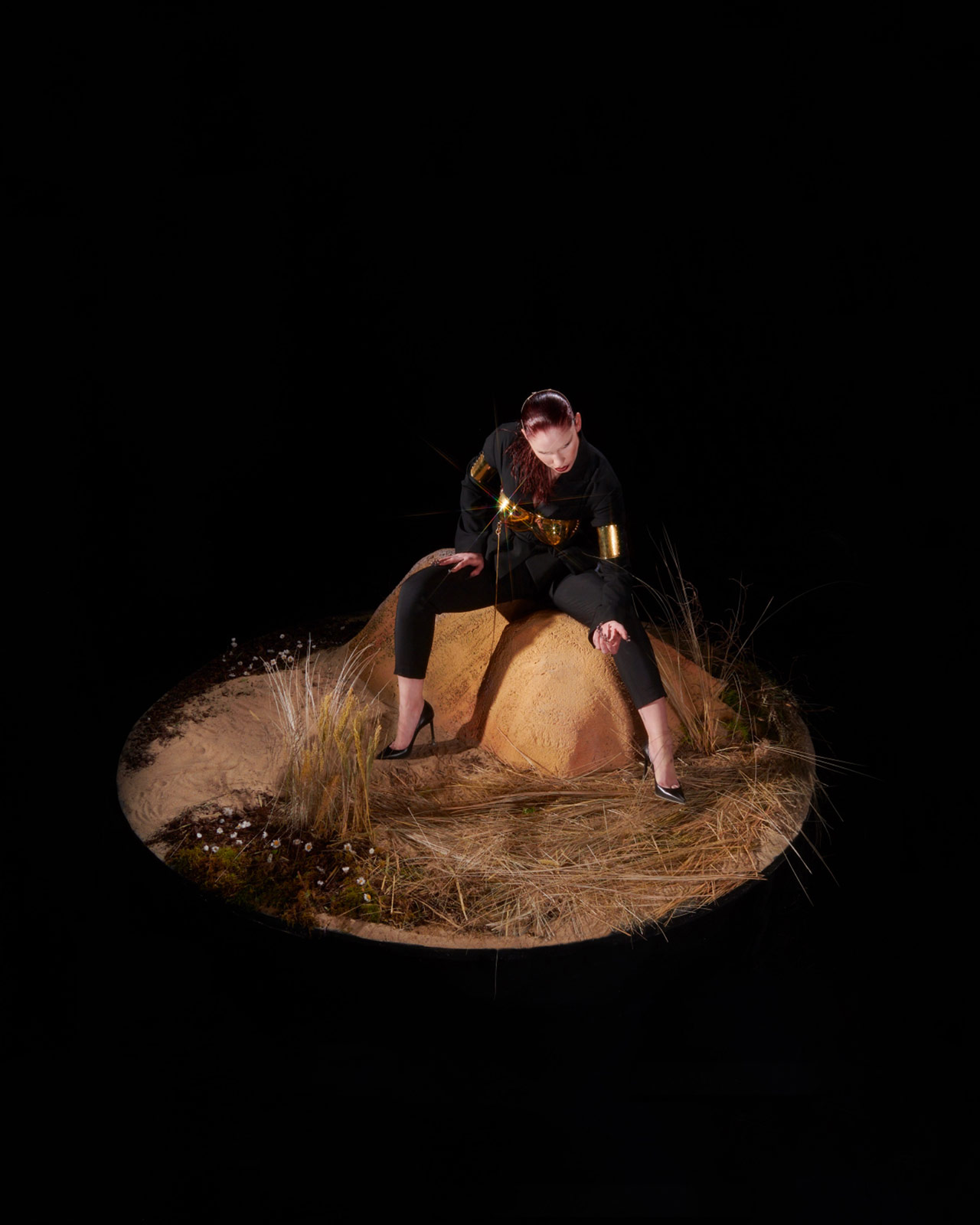 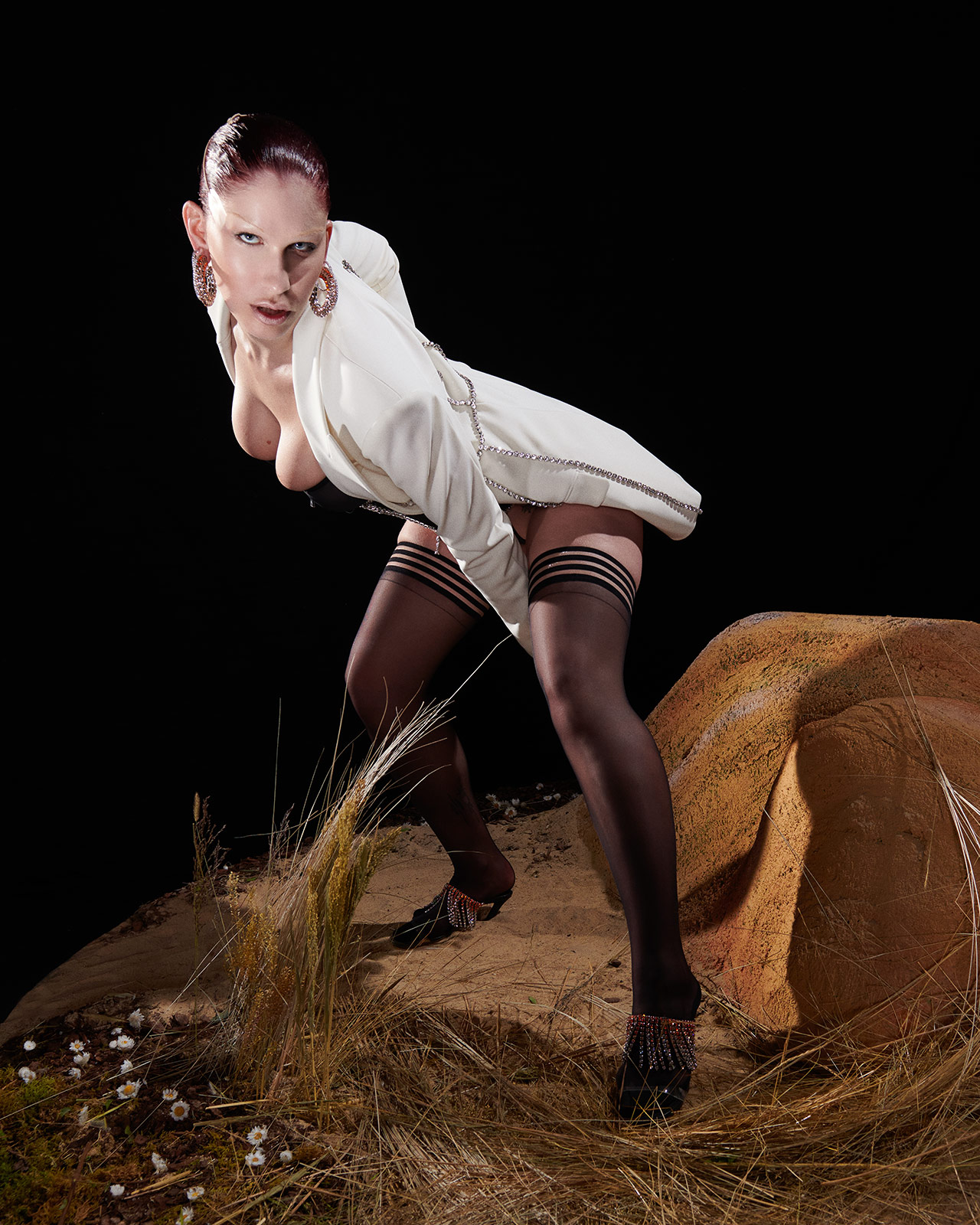 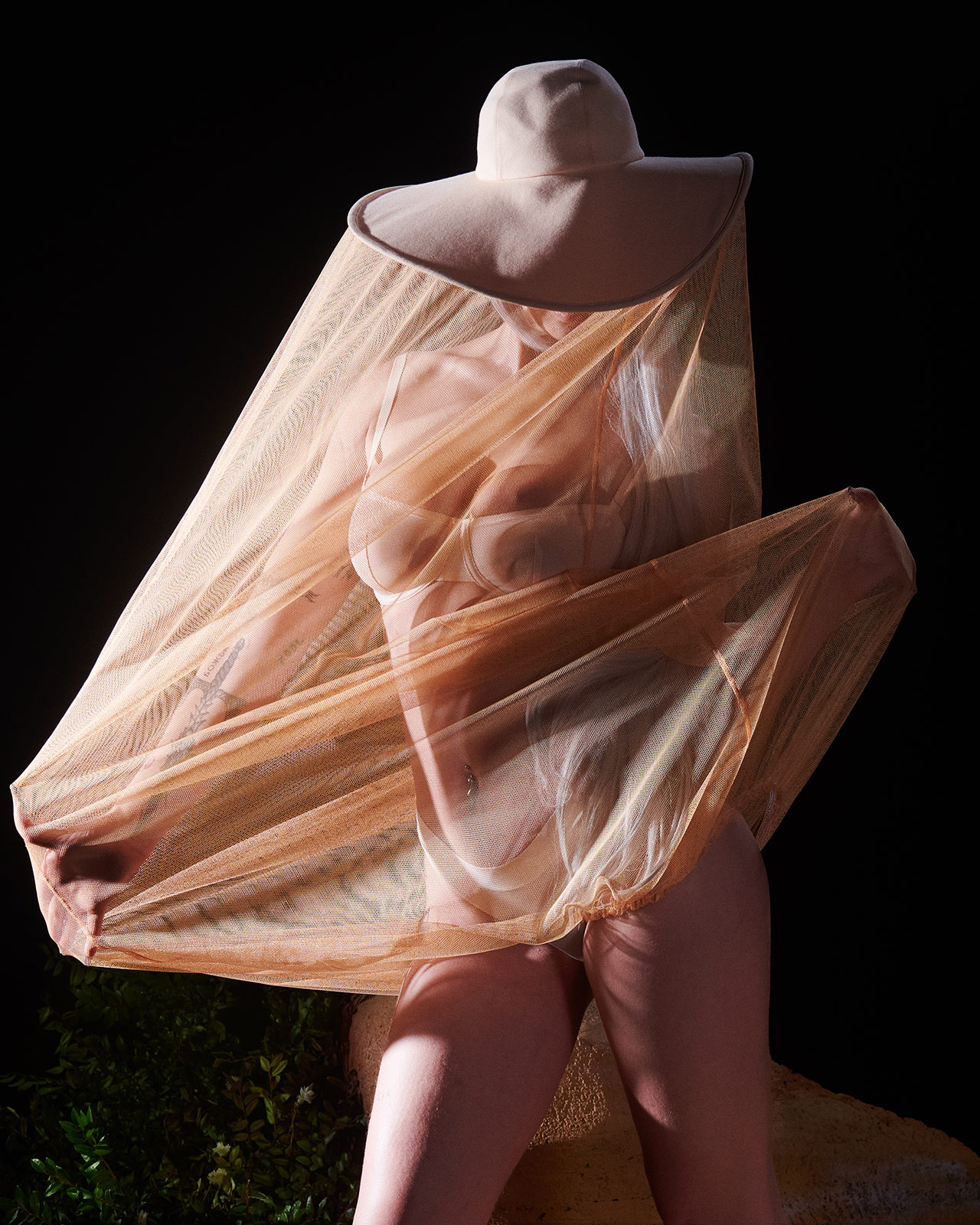 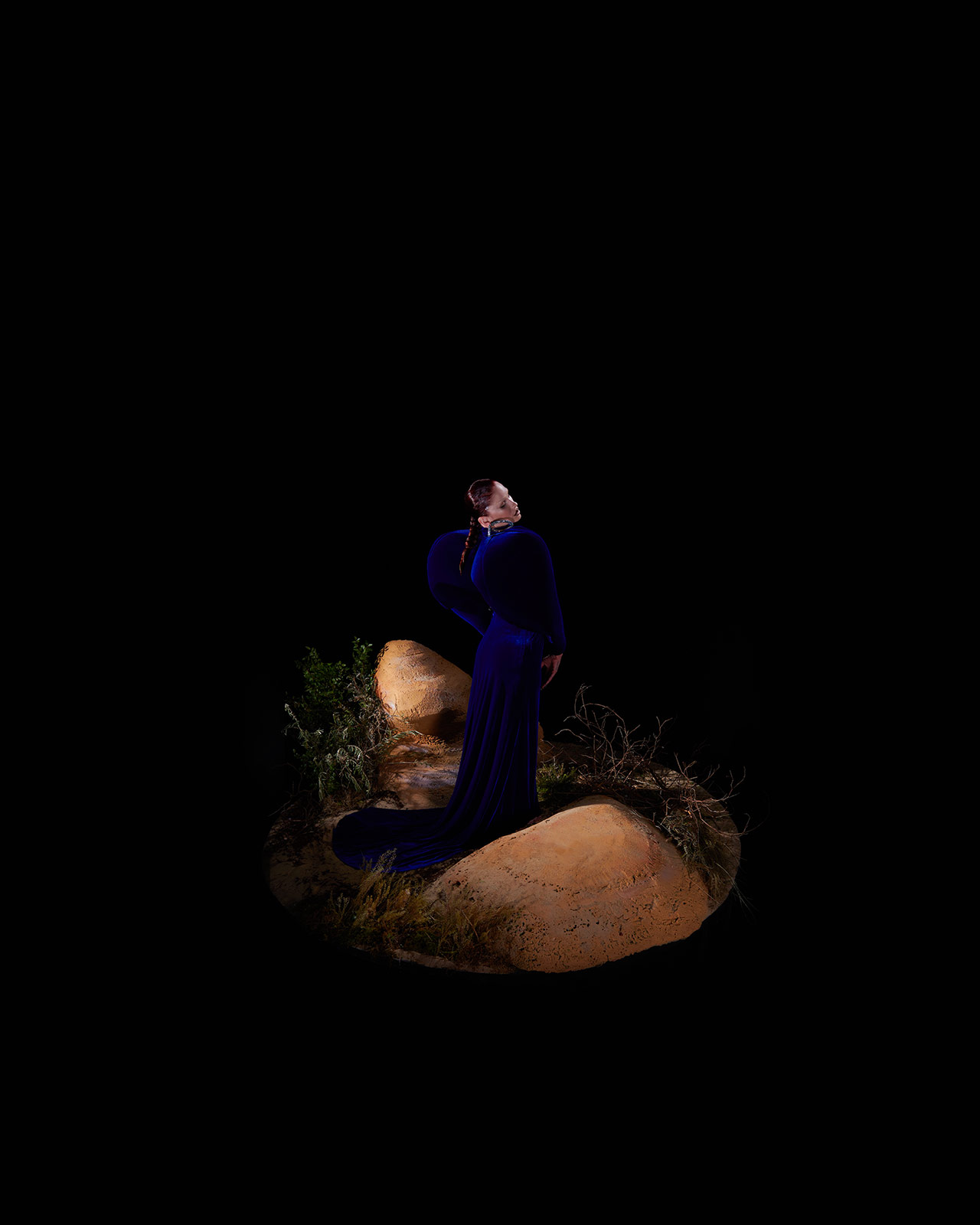 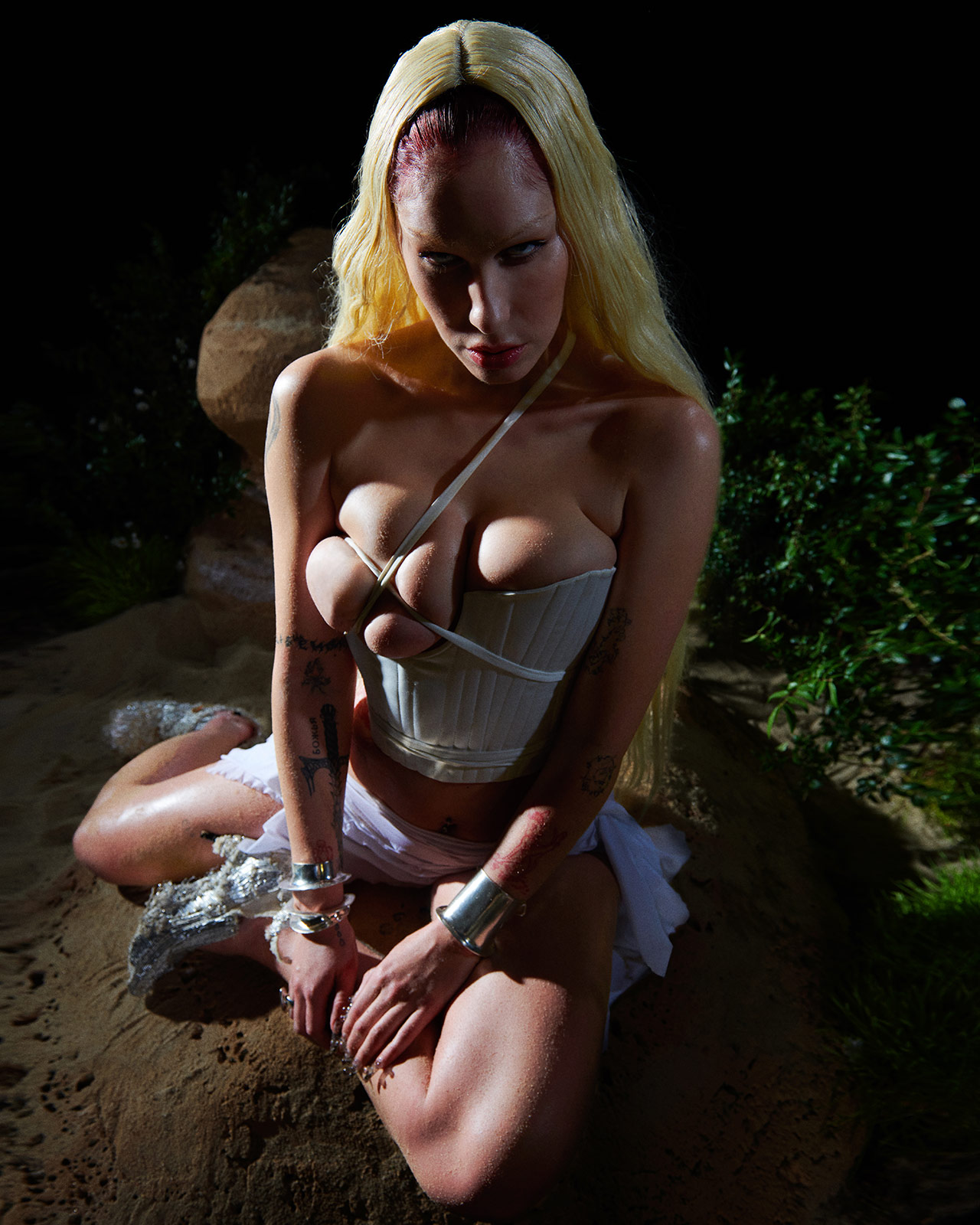 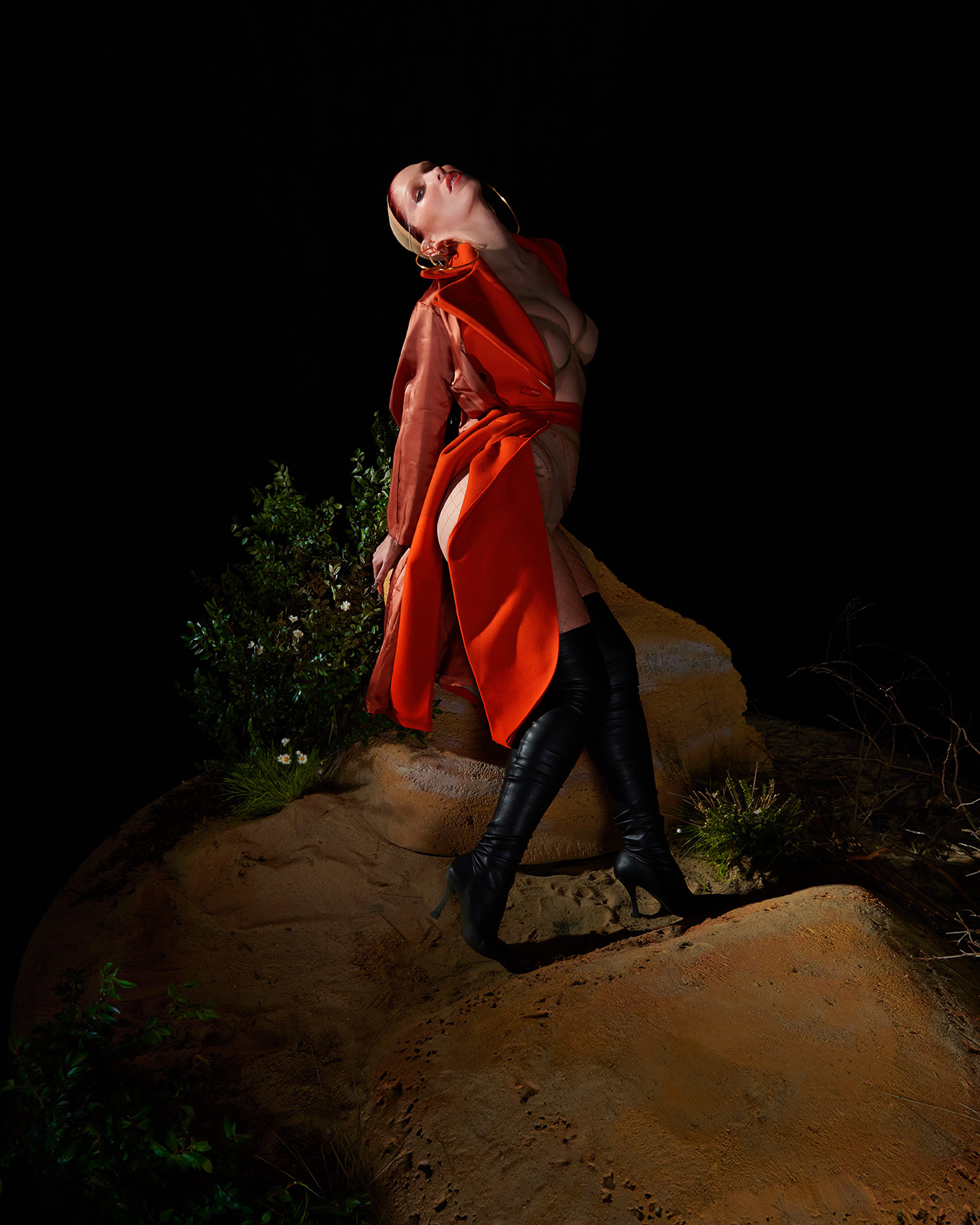 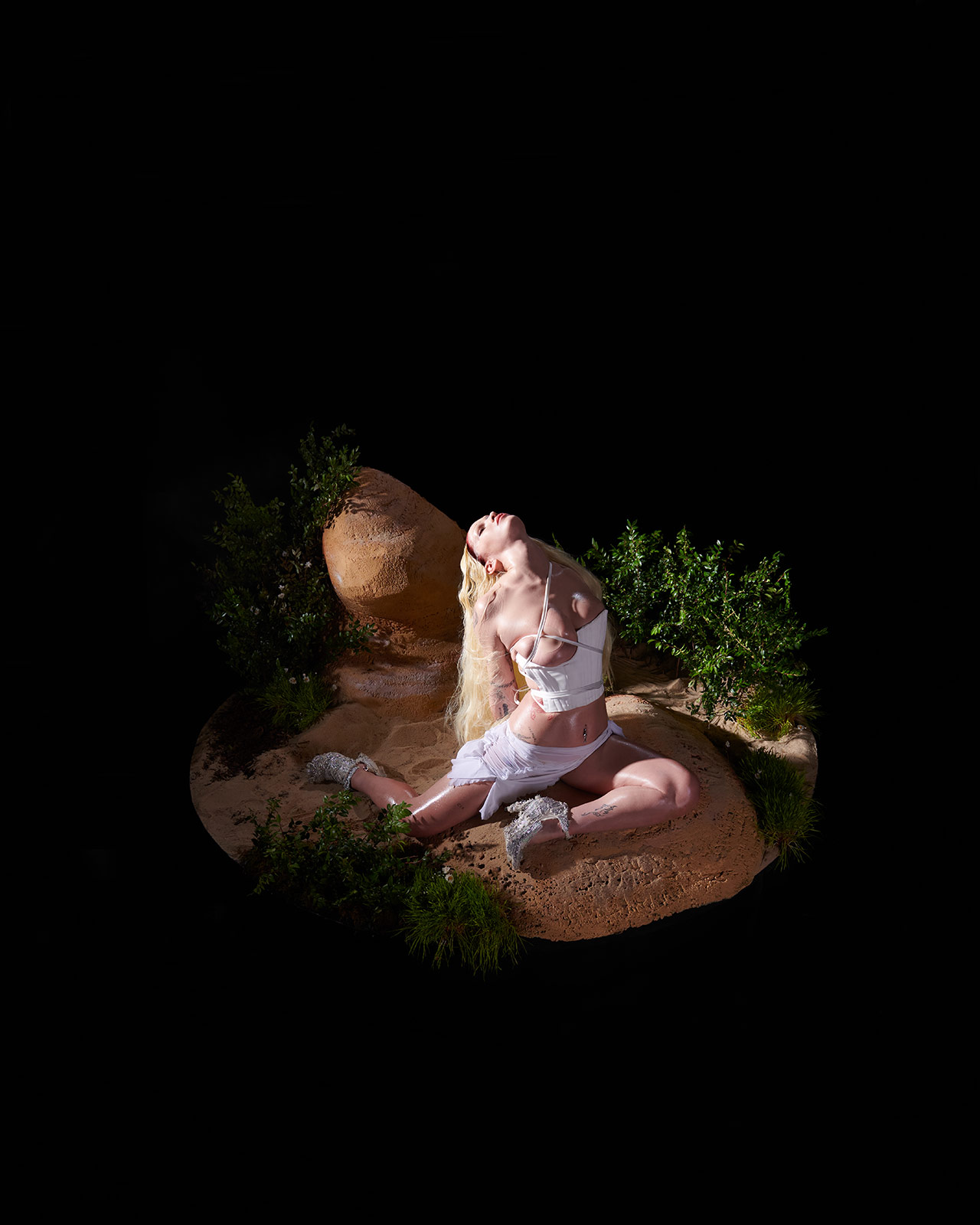 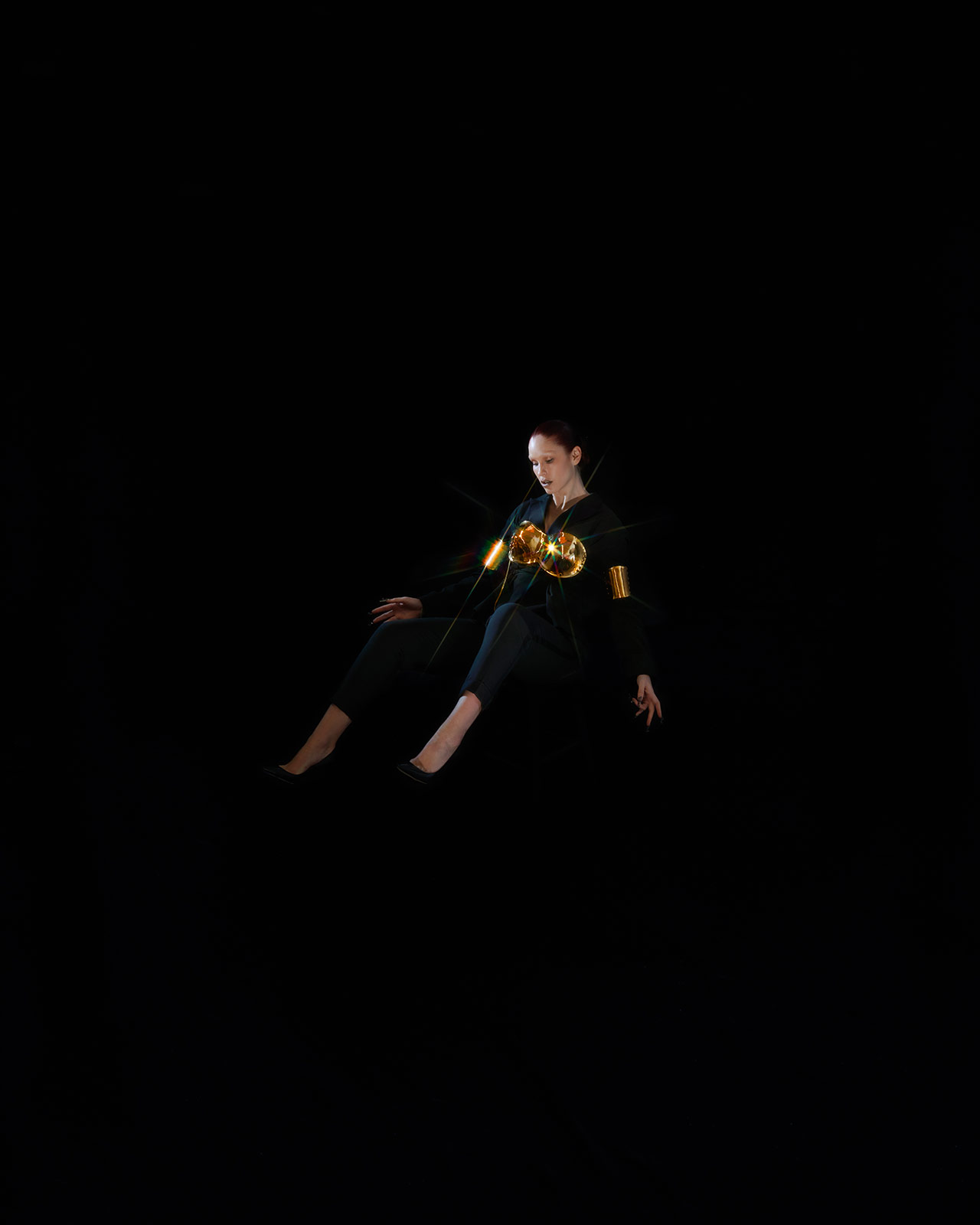