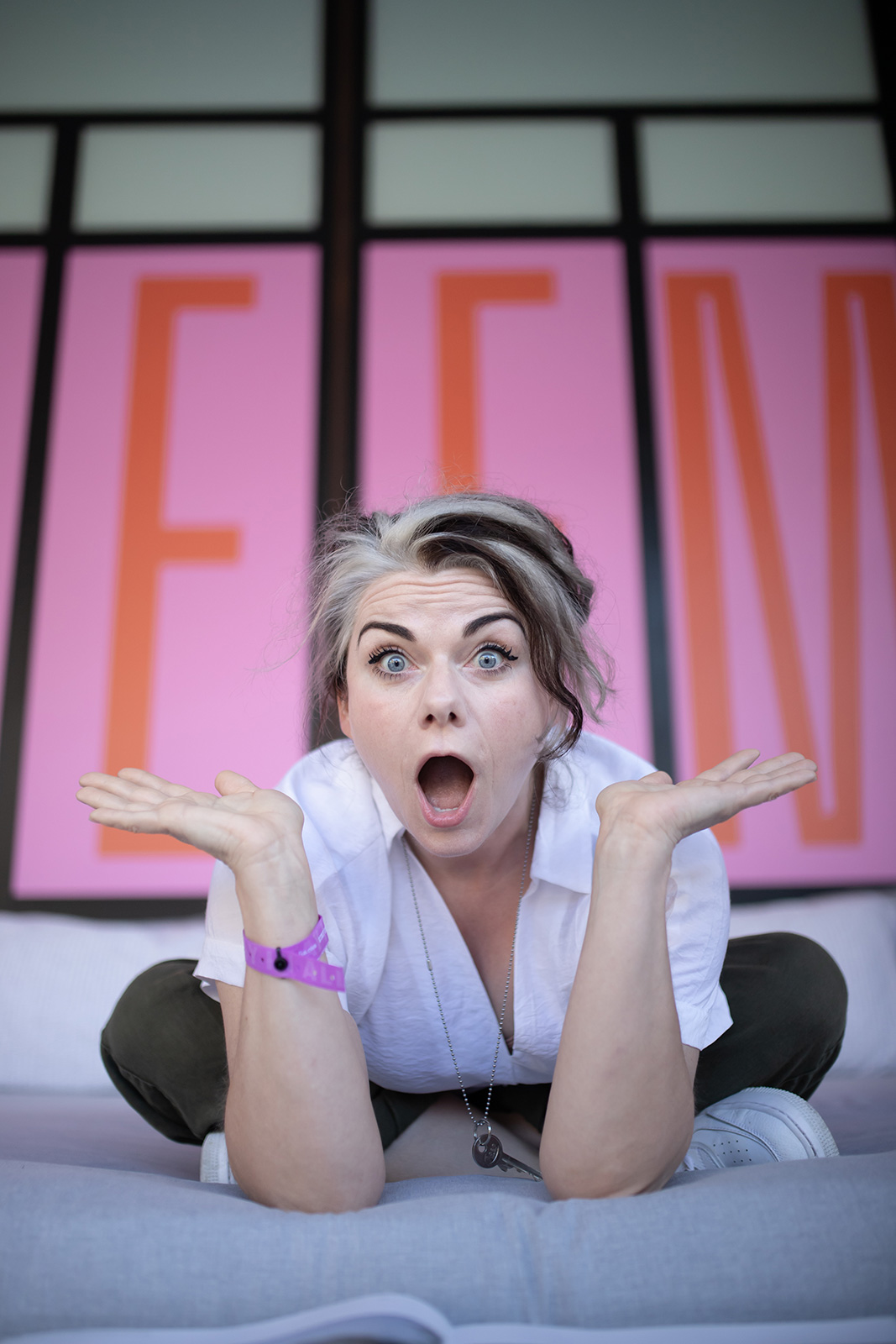 I flew to Mallorca a few days ago to interview the charismatic journalist and author Caitlin Moran, at a new literary festival called FLEM in Mallorca. We sat on the INNSiDE by Meliá Calviá Beach terrace to talk about psychedelic sex fantasies, asking questions in the age of cancel culture, the superiority of Miss Piggy over Margaret Thatcher, and why everyone is welcome to the conversation, in addition to talking about her latest book, More Than a Woman, published by Penguin Random House and Anagrama in Spain.
How do you think the media can normalise realistic depictions of female desire?
It’s difficult, isn’t it? Women’s sexual imaginations have been so curtailed, so prescribed, and then so trampled on by online pornography that I think it should start with something where it’s collaborative. Women need to start thinking, what do I like? We’ve been saturated with so much bad sex directed by men that that’s where we need to start.
I wonder if we could find a culture somewhere where women have never seen or heard of sexual pornography and talk to them about what their sexual fantasies are. If you’ve ever read Nancy Friday’s My Secret Garden she interviewed women about their sexual fantasies. That stuff is batshit! There are women pretending they are clouds absorbing planes into their vaginas, or they’re giant robots…
Or mushrooms…
Yeah, literally! It’s so psychedelic! And why wouldn’t it be because every single part of a woman’s body is so sensitive in ways that men’s aren’t. So ours would be more oceanic, our arms could be as sexy as our vaginas, and women can come forever. That’s the other thing we’re so used to in pornography: sex being 2 or 3 minutes. He gets it in and then they come. But women can fuck forever.
Have you seen Erika Lust’s films?
I’ve watched some of her stuff. I’m writing a movie about pornography at the moment and she’s one of the people that we’ve based one of our main characters on because she’s amazing.
Yeah, more female directors and screenwriters would help the situation. What about Gen Z?
Maybe instead of Tik Tok you need Tit Cock? Just all brilliant, amazing feminist porn?
Maybe lesbian pornography is the way to start first… let the lesbians take over sex for a year and we’d all learn a lot.

“Any political movement I like is relaxed and asking questions.”
In the Guardian, you said feminism “should be as exciting as rock'n'roll.” I agree, but how can we make that happen?
Have you watched Broad City?
Yes! I grew up in New York City.
You are Broad City. That to me is as exciting as The Beatles. That is rock’n’roll. By rock’n’roll I mean, not just that it’s exciting and it thrills you, but also popular culture moves faster than politics. We need to involve politics in feminism; we need to change the law to change women’s lives. In terms of what works quickest, it’s popular culture. It’s the same thing as rock’n’roll.
It’s that feminist saying: “I cannot be what I cannot see.” I’m so sure that those girls who have grown up watching Broad City have an idea of how to be a comfortable, happy woman who has friends and doesn’t take her job too seriously and smokes marijuana and falls down a hole in Central Park. That’s really important because I didn’t have any role models like that when I was growing up. Most of my heroes were from the 19th century: Jane Eyre. In popular culture at the time it was Joan Collins in Dynasty or Margaret Thatcher. It’s very difficult to work out. Now I know what I am. Seeing those role models there, Miss Piggy was as near as I got, on The Muppets Show. So many women I know loved cartoon characters and puppets because we weren’t making human women that felt like they would be a fun thing to be back in the 80s.
Things have changed so much now. Now I think it’s reversed. Now men have so few fun rock'n'roll role models. When you want to be an adult man you still have to be an action hero, whereas with women we live in a world of Beyoncé, Katy Perry, Lana Del Rey, and the Broad City girls, and Lena Dunham and Lizzo. I saw Lizzo at Glastonbury and screamed my fucking head off. If I had seen a big woman in a fucking leotard playing jazz flute when I was sixteen, I would not have had the body dysmorphia image problems that I had for the next 10 years.
Could you tell me more about that?
Every time we see a happy woman succeeding in life as a girl you say, oh yeah, maybe I do want to be a woman, maybe I do want to grow up. That looks fun. That’s the important thing. Show me a woman succeeding and I will feel better about being a woman.
The biggest problem I meet among young girls and young feminists is they say, “I’m worried about making a mistake. I’m worried I’ll say the wrong word. I’m worried I’ll tweet something and get cancelled.” As a consequence, young women aren’t only not talking about stuff and having opinions they’re not asking fucking questions, because in some of these issues if you ask a question about something it’s seen that you’ve got it wrong. You should know what the answer is. It’s dangerous to ask a question. And any cultural movement that means that we stop talking and stop asking questions has a built-in obsolescence. So we really need to watch that.
Feminism at the moment is in danger of trying to be perfect and correct at all times, and not question things. Any political movement I like is relaxed and asking questions and you can kick things around. It’s a bit more jazz. You should be able to fuck about and be silly. There are some things now that I would not be silly about because I’d be too worried I’d be cancelled over it. At some point I will get the courage up to talk about them. I never thought I’d be scared about anything in feminism, and there’s a couple a subjects I wouldn’t touch with a fucking barge pole. And that’s ridiculous.

“I’ve had people ask me about sex work, what’s the feminist take on these things? I don’t see any men talking about these subjects. Why are feminists always being asked about sex work?”
I don’t know how John Waters, who I love by the way, manages to express so much and not get cancelled…
He’s done that thing that the right usually does, which is: “I’m disgusting, I’m always a disgusting person who says awful things and transgresses.” So if you set yourself up as a transgressive person from the beginning…
Sometimes you do have to say things that might hurt people to start a conversation. Not purposely, but sometimes you ask a question that will make people go, what? Not to be provocative but you should never accept anything. I read a lot of history and the things we accepted 200 years ago we now know are wrong. You look at slave-owning families 300 years ago or families in England that were earning their money from the sugar trade in the Caribbean, and generally it was accepted. All the characters in Jane Austin made their money in the Indies and that was seen as perfectly normal. Then someone started asking questions. That would have made for some very awkward dinner parties in 1710, but they weren’t scared and they carried on, and now we all know that slavery is bad. So you’ve got to be able to ask an awkward question at a dinner party otherwise we won’t be able to get anywhere. Though my awkward question is usually, “Can I smoke in here?”
We’re in Europe; it’s fine. So, how can a man be a better feminist? Men often say, feminism – that’s for women.
First of all, that’s still a really big thing. My husband tried to join the feminist club at university when he was 18 and he was told that men couldn’t be feminists. Every time women say this, or say “you’re a bad feminist,” “you’re not the right kind of feminist...” there’s no such thing as a bad feminist.
Even if every woman in the world believed in feminism, and said they were feminists (and they don’t – the stats are still piss) that’s still only half the world’s population. This idea is like a germ… You want to spread it to as many people as possible. If you will not give this germ of a brilliant, liberating, exciting idea to men then we will never win. We have to make it clear that men are allowed to say they are feminists. And I want them to join the conversation.
I’ve had so many people ask me about trans rights, I’ve had people ask me about sex work, what’s the feminist take on these things? I don’t see any men talking about these subjects. Why are feminists always being asked about sex work? It’s like, I’m neither a sex worker and nor do I use one. It’s your gender that uses them. Why are you not asking what are the kind of men that pay women, who don’t want to have sex with them, for sex?
That’s how feminism for men could start, if they started addressing the problems that we can’t answer. I’d like men to start asking other men that, talk about that. So that’s where we start. Just go, men there’s a whole load of stuff we need help on.
Can you tell me about the process of writing your semi-autobiographical novels?
In More Than a Woman every single chapter is something that could happen to any woman, so getting your first period, bad boyfriends, abortions, miscarriages, eating disorders, giving birth, getting married… They are universal general experiences had by most heterosexual women.
How To Build a Girl is my life story again but it’s all the stuff that happened to me that doesn’t usually happen to any other woman. Becoming a writer, becoming famous, hanging out with other famous people, and dealing with sexual exploitation in an industry that’s full of sexual criminals. How To Build a Girl was all the stuff that had happened in my life that is not ostensibly relatable, but I thought that there was such an interesting story there, because you’re right in the heart of power and communication and the people who form our culture. To go there as a really poor working class horny feminist and view it in a way that no one else was… generally everybody else was an older sexual criminal. So to be able to have that viewpoint and be able to talk about where pop culture is made and who’s in charge of it and why we do what we do, I wanted to tell that story as well.
That’s the beautiful thing about fiction and non-fiction. Nothing is wasted. Often it’s quicker to tell the truth in fiction than in non-fiction. Because you can shift it. It feels like more of a story if you change ten percent of the facts and just ramp it up a bit. Also, so much of art is basically just wishes. So a lot of it was wishes that I had about what would have happened. (Laughs). 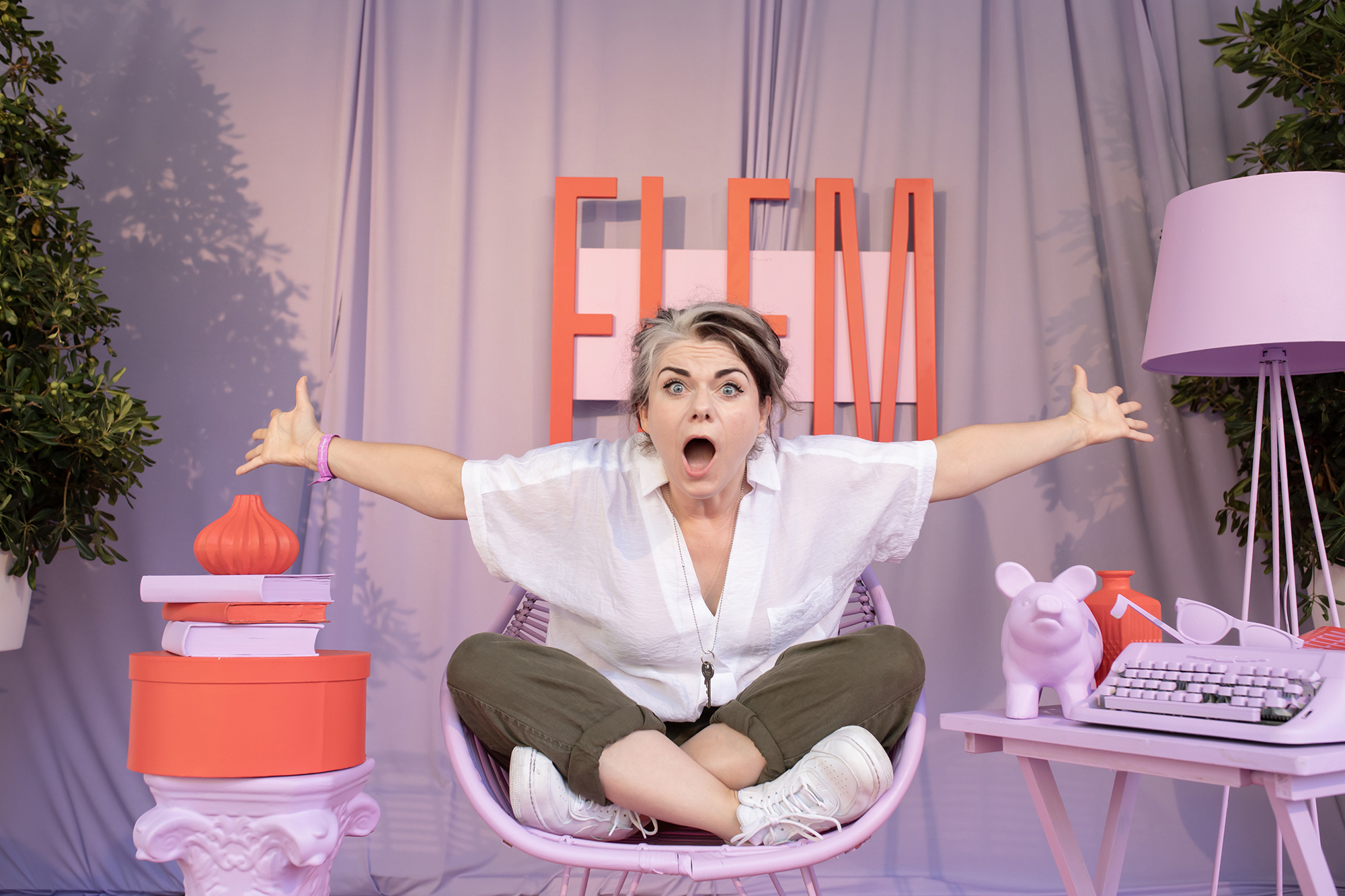