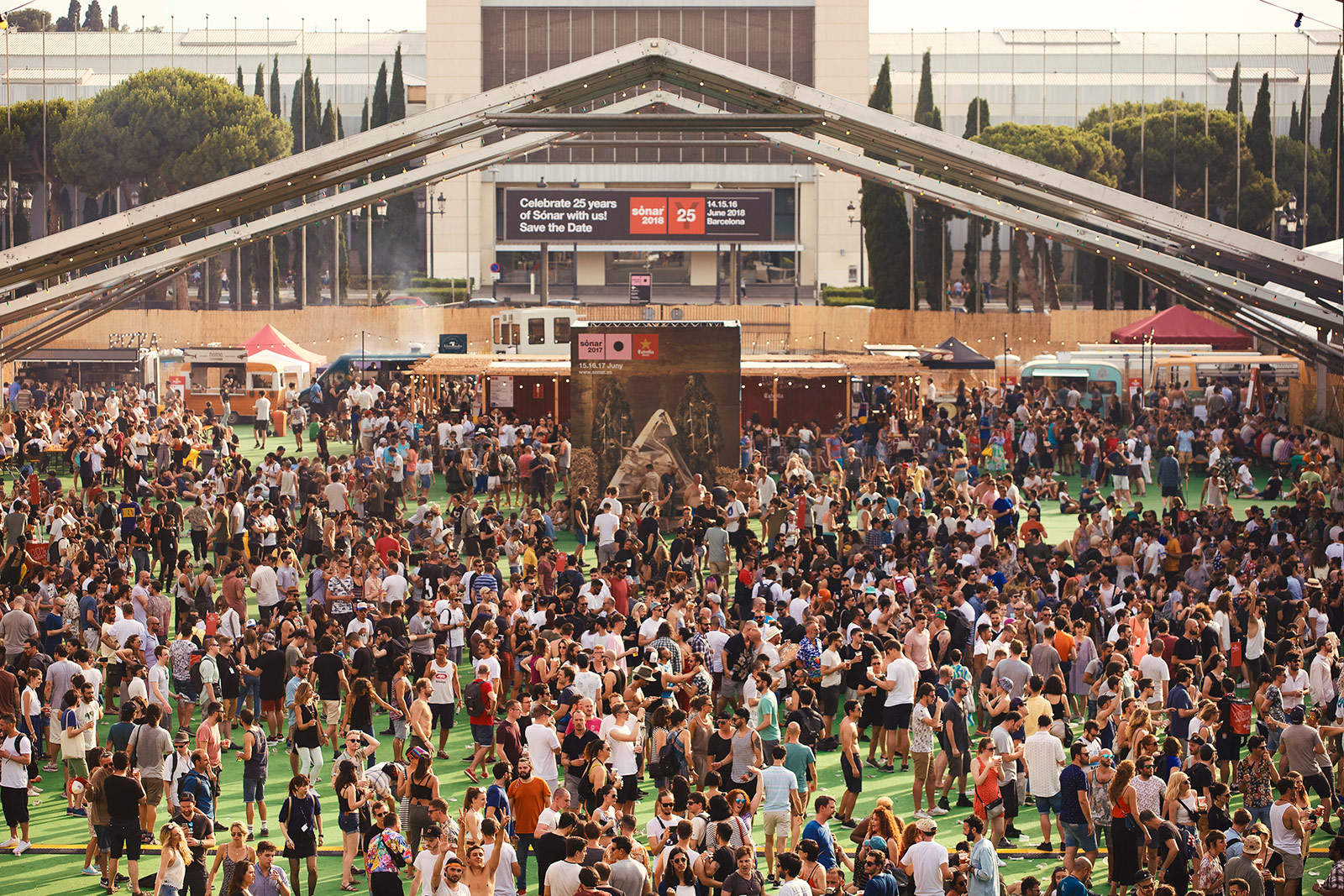 We’ve been craving for it for weeks, and now it’s gone. But, oh, the wait is always worth if it’s for this festival. The 24th edition of Sónar Barcelona has coincided with a heat wave in the city, which, together with a very powerful line up, has been – almost literally – too hot to handle. From Thursday to Saturday we’ve danced to the rhythm of many different styles in many different environments, but one thing is clear: the good vibes, a strong passion for music and a great sense of style are the main ingredients that make this festival one of the greatest on Earth. Do you wanna know what happened inside? We’ve got you covered.
Our Sónar journey started with the much-awaited performance by Boris Chimp 504. After five minutes we were already sailing through the cosmic rays recomposed by Miguel Neto and Rodrigo Carvalho. In their own graphic language, they reached Boris the Chimp, letting the public flutter in sparse Japanese rhythms with a twinkle in their eyes. But the sun was out, and soon after Princess Nokia brought us back down to Earth – the girl from Harlem immediately put the public in frenzy. The style, the flow, the commitment; she's here to kick ass. At ease on Jersey club, electronic music and trap sounds, she had the space to attest her feminist rap as well as crowd-surf on the main stage of Sónar by Day. 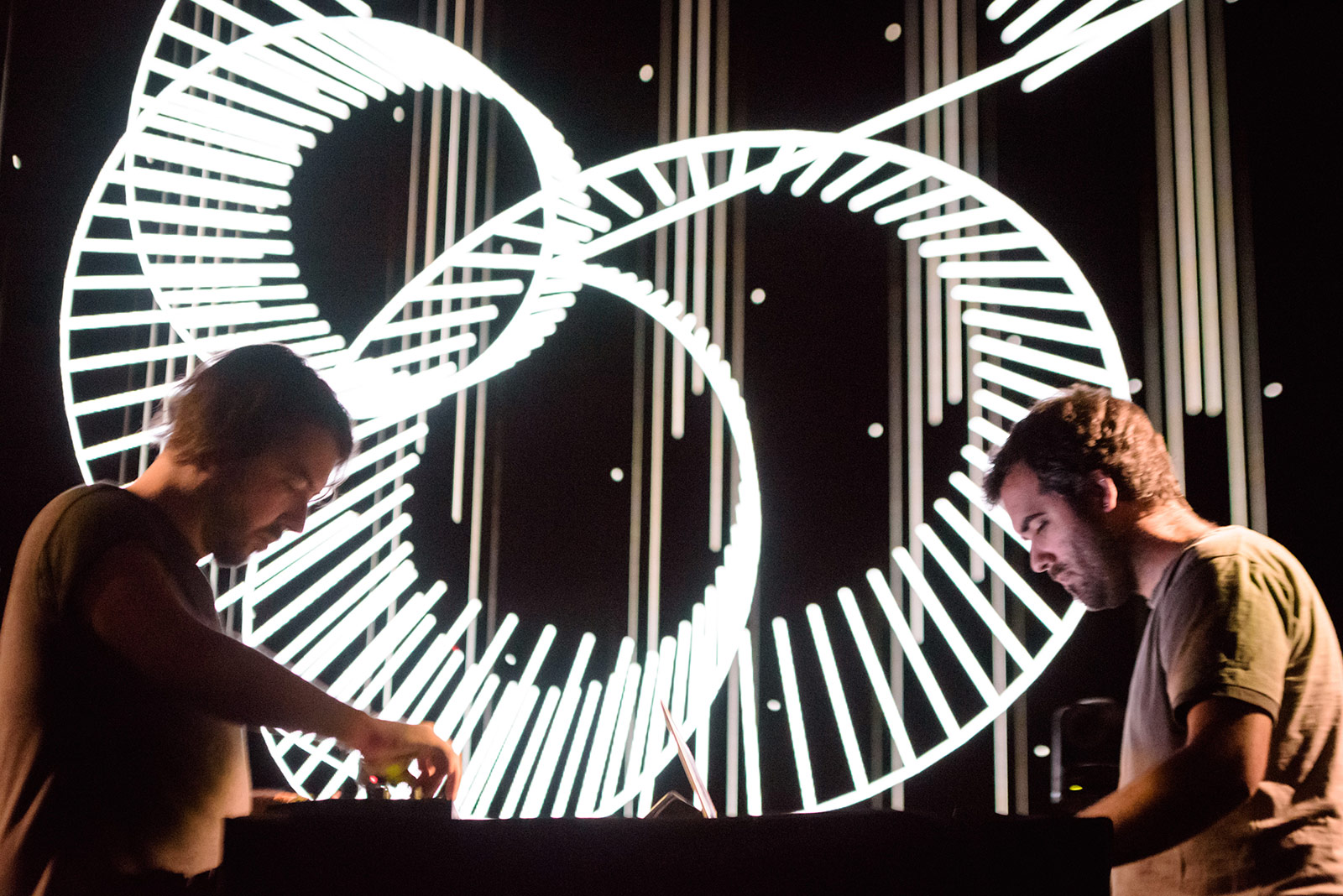 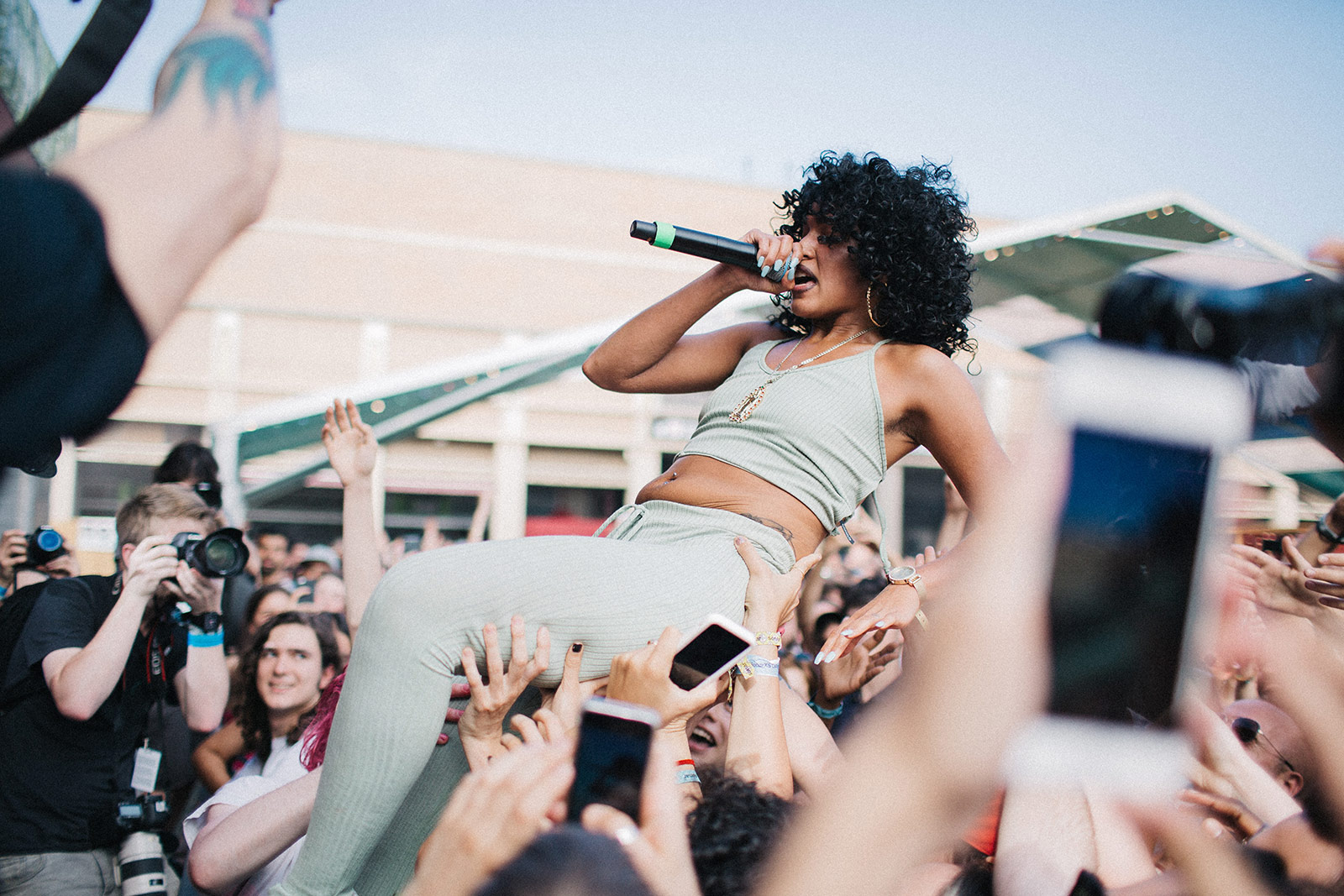 In the same vein, D∆WN was able to spread out her artisanal R&B as nowhere else – the public was indeed more than ready for this. By dedicating her show to everyone "no matter where you come from" or “which colour you are: blue, violet or black“ the first day of Sónar appeared pledged and fiery. So much that D∆WN's finished her stunning show dancing on a speaker! 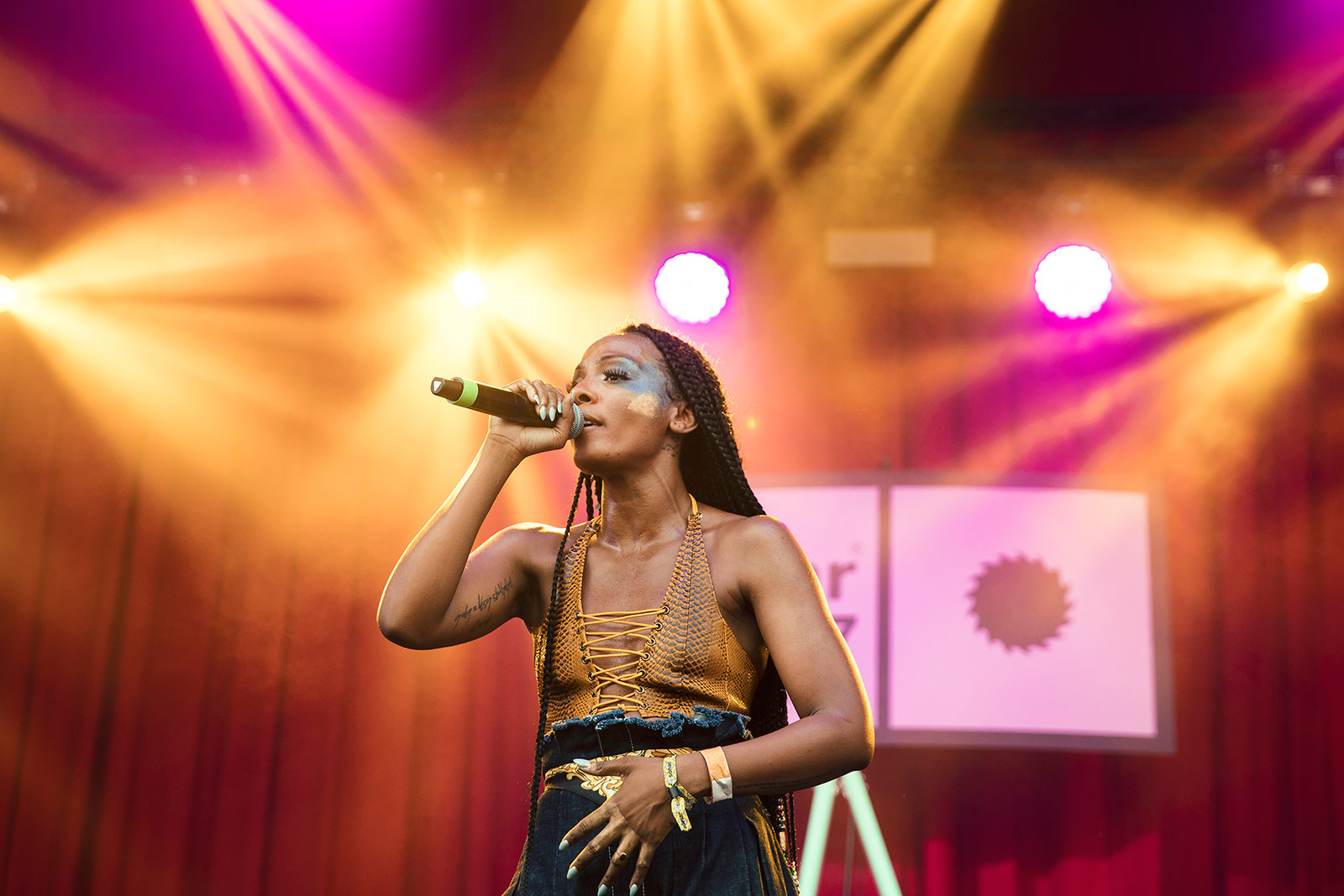 But the real highlight of the day was Arca’s performance. The Venezuelan singer warned the audience before starting: it wasn’t a kid-friendly zone neither a too-sensitive-mind-friendly zone. And he was right: watching a close-up fisting wouldn’t have been appropriate for them, but it was for us. His magical vocals, the tight corset paired with thigh-high boots, his aura, and the way he made some of the subjects among the public fall in love with his persona just by dedicating a three-second look into their eyes were more than enough for us to say that he is the one to watch in the future. What a beautiful, poetic and rebellious way of ending a perfect day. 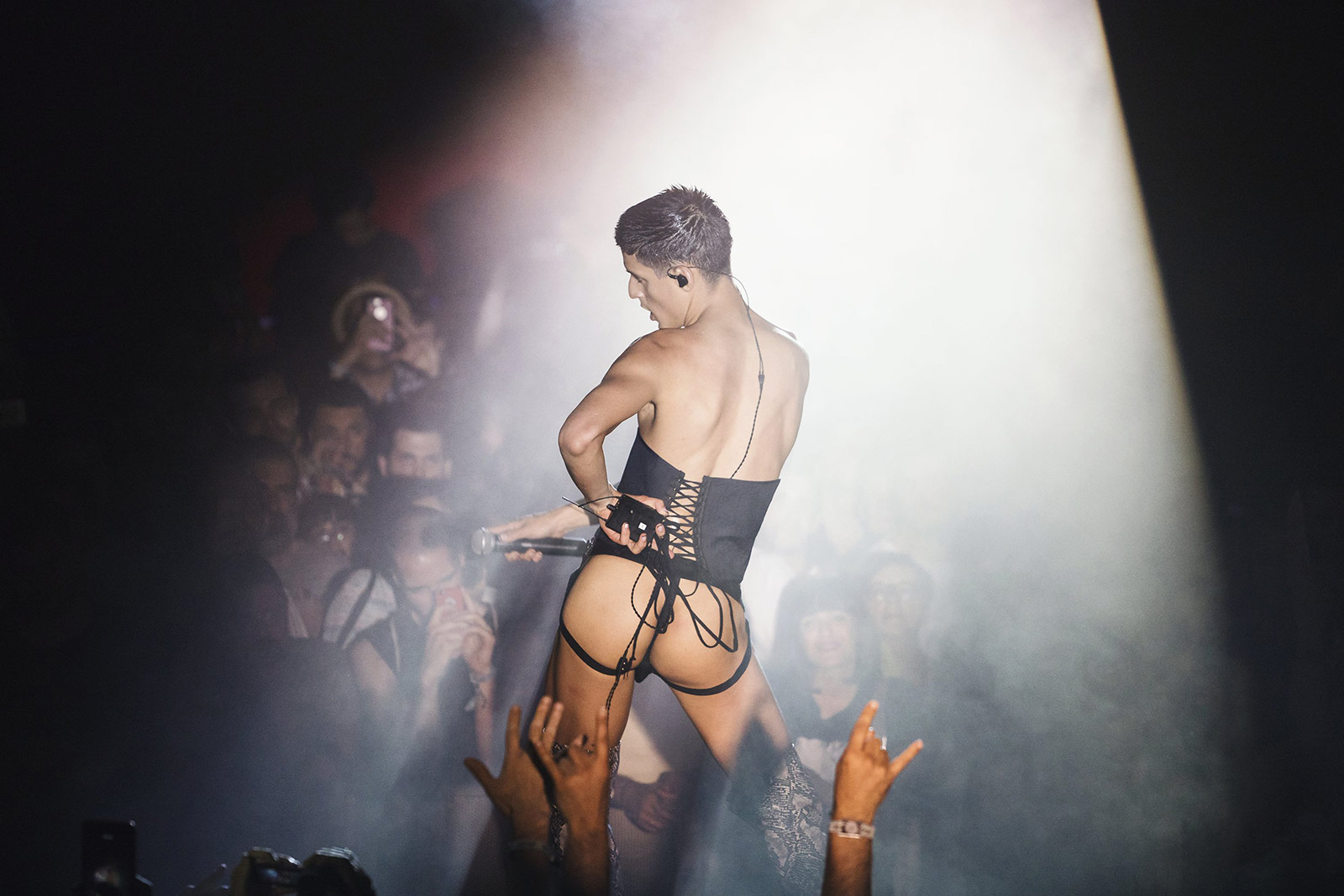 On Friday we started with French sensation Jacques. He sublimes ordinary noises and turns them into extraordinary sounds. Using everyday life objects to make music, he performed with the most original set up of the festival. For his first time at Sónar, the Parisian artist sampled noises from plastic chicken, tape rolls and wooden boxes that he mixed live to forge a very solid techno sound. An amazingly unique version of experimental music not to be missed. 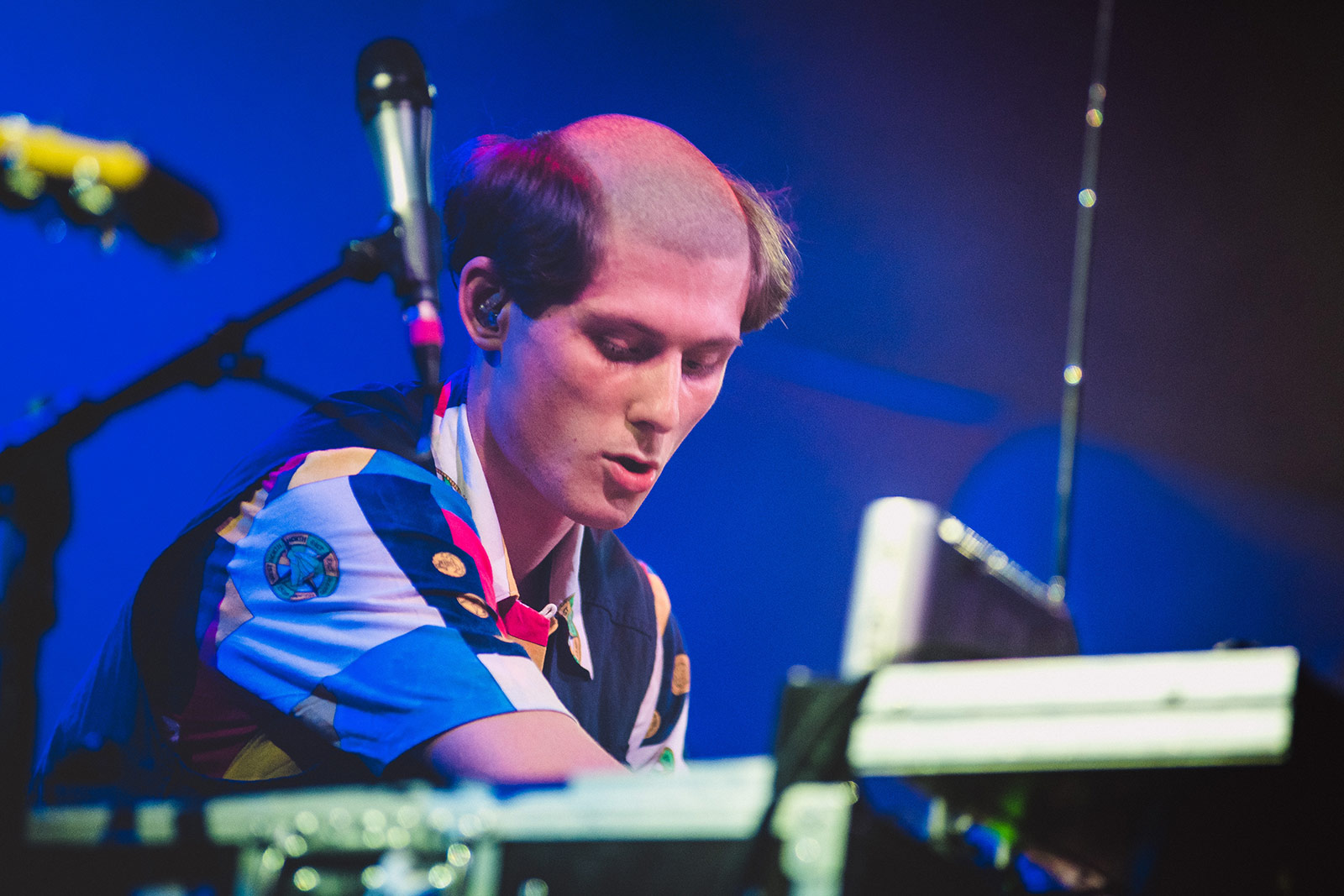 After him, it was Evian Christ’s turn, who was presenting his first album; and after having attended his performance, we can’t wait for its official release later this year. The British producer was sublime musically speaking, but in addition, the show itself was mind-blowing, turning the SónarHall stage into a surreal environment through lighting and smoke. But after this intensity, we wanted to chill a bit and dance to the groove; so, what better than the house set by Kiddy Smile? The queer artist brought three tireless dancers who lit the new SónarXS stage from beginning to end. Everyone danced happily, smiling non-stop, and when looking around, it seemed as if the dark environment had turned into a flashing rainbow. 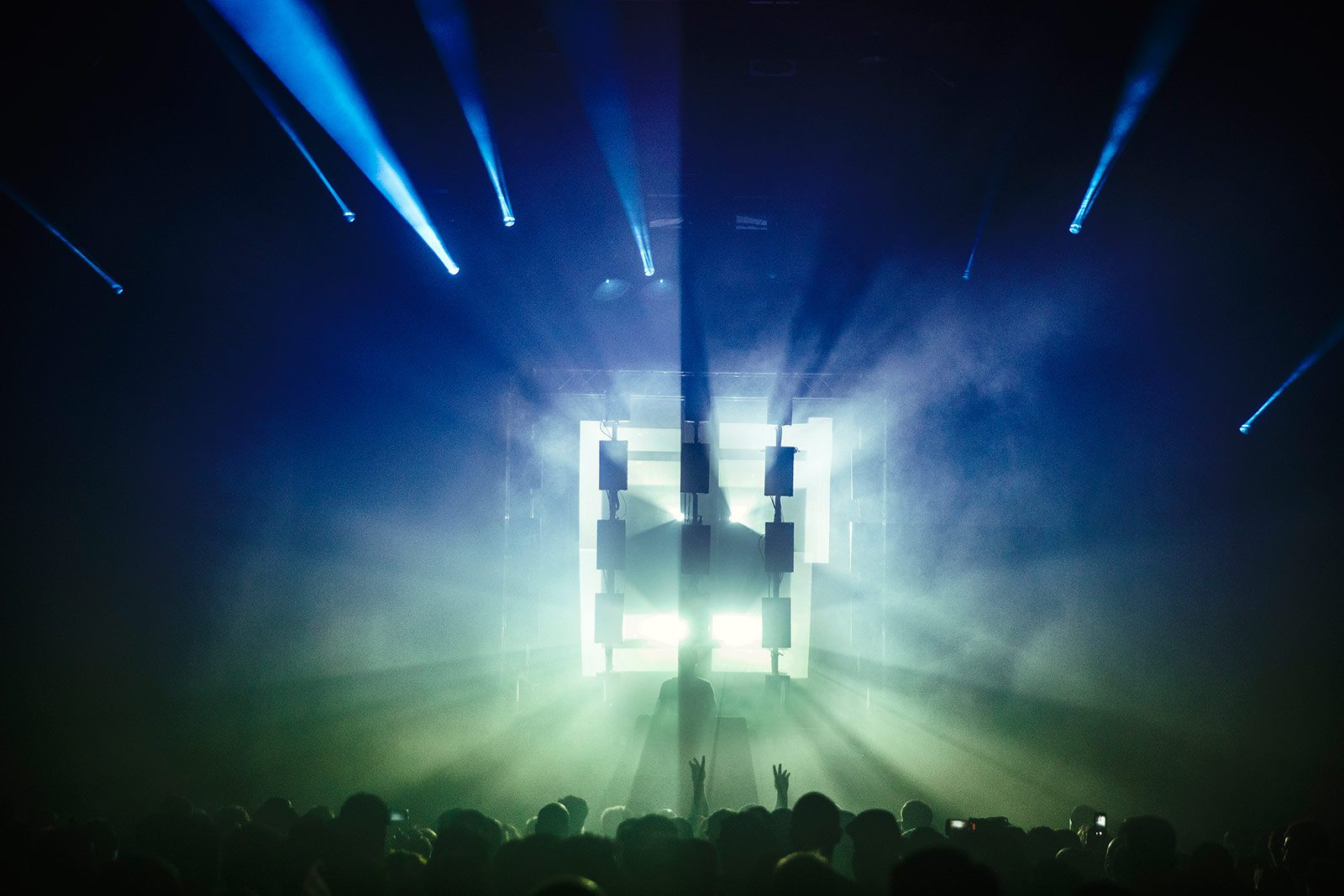 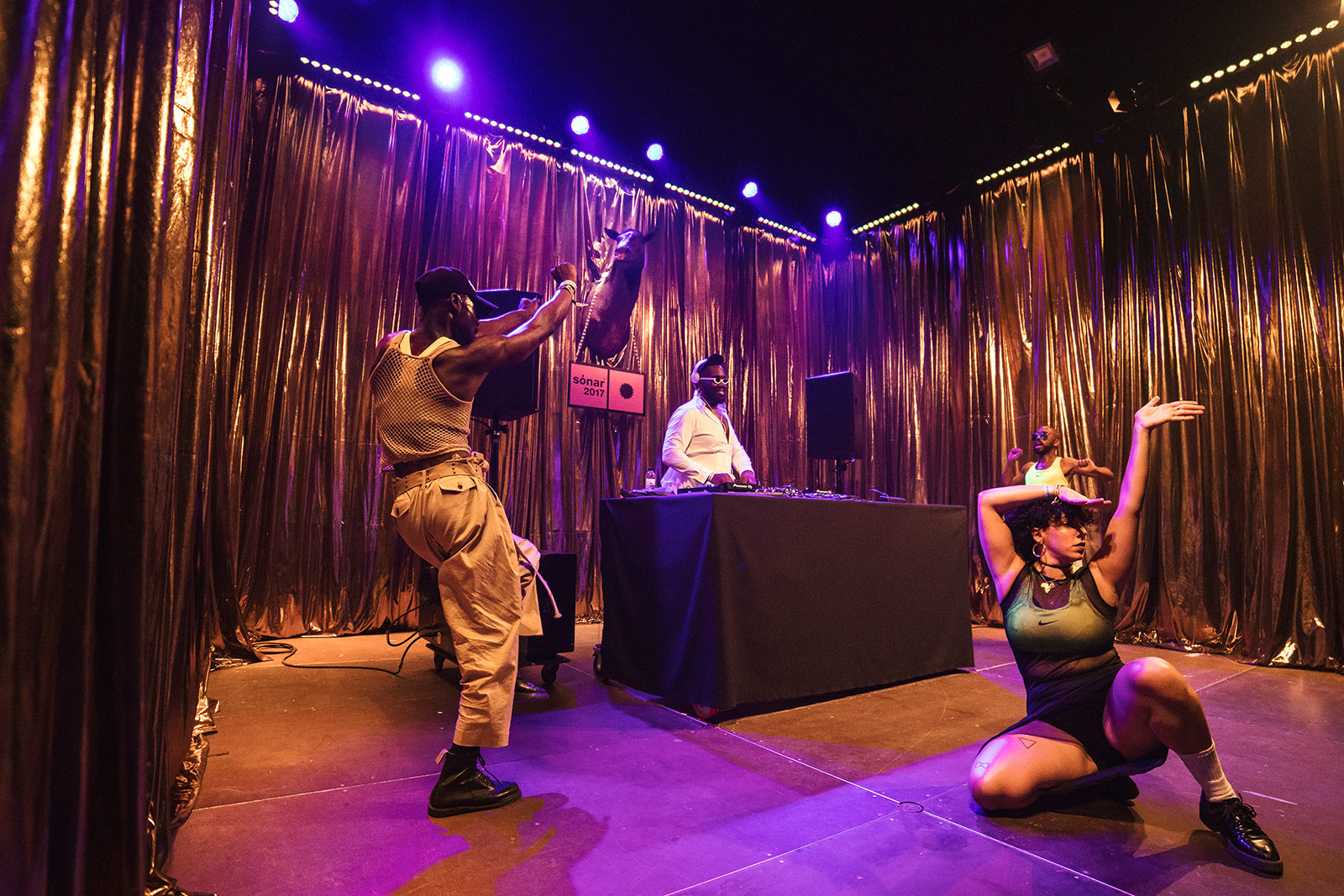 We ended Friday’s Sónar by Day at Damian Lazarus’ DJ set. He was good, the setting was nice – it included a luxurious-yet-creepy chandelier –, but we left the show feeling we lacked something. Maybe our expectations were too high, but the very danceable and kind-of-hard music we were waiting for arrived only in punctual moments. Nevertheless, we still enjoyed his performance as well as his abstract, intergalactic visuals.

Once at Sónar by Night, trip-hop pioneer DJ Shadow was once again our guide through a trip into deep-space. Both sci-fi and vintage, his stellar performance was one of the most remembered moments of the festival (for those who got there early enough). Scratching up atmospheric and nervy sonic notes with perfect fluidity, it’s clear that the king of sampler will never stop bringing his initial instrumental hip hop sound to new but edgy territories. 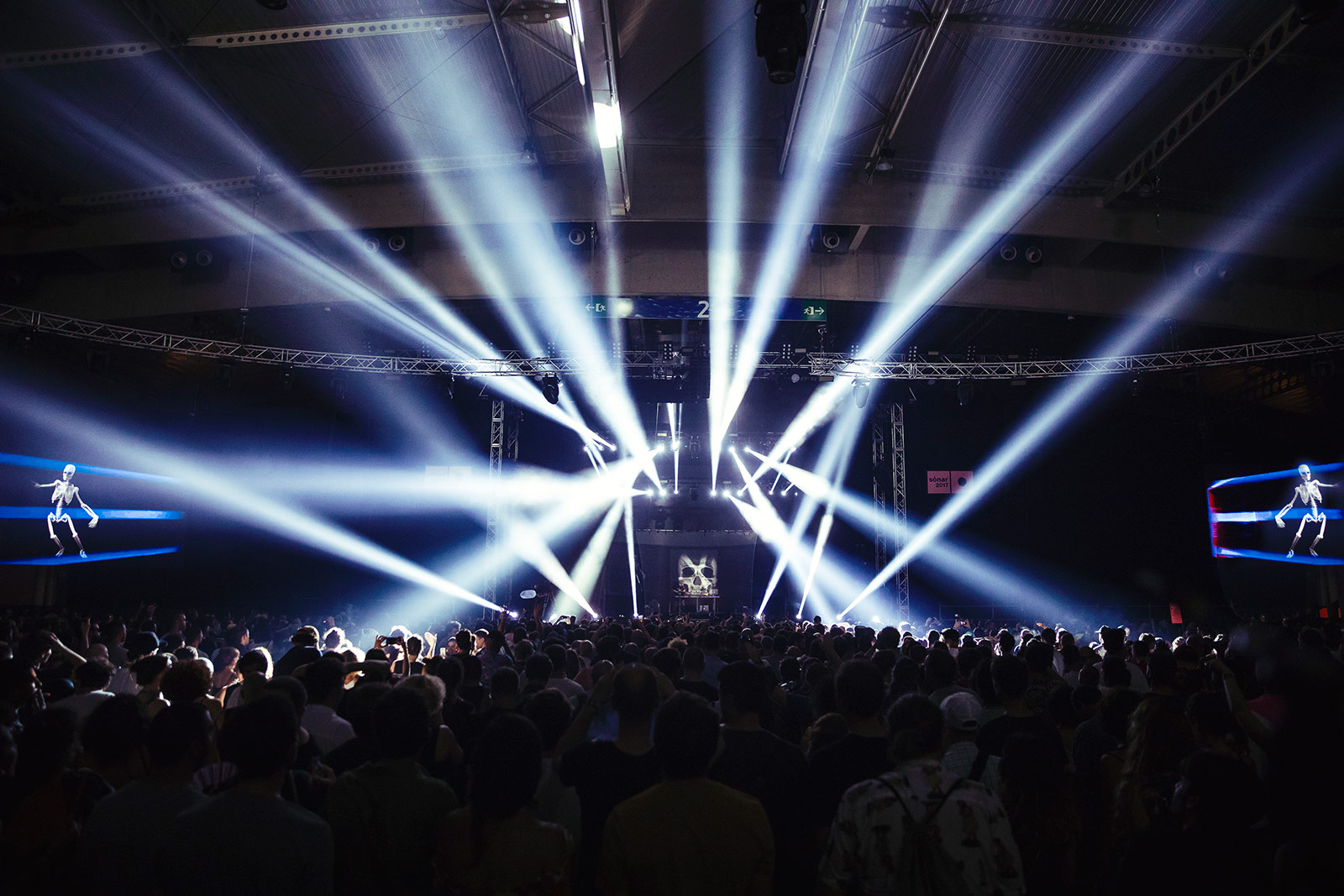 Moderat was one of the most-awaited bands, also, and we can understand why. Playing at SónarClub in front of a very excited (and sweated) crowd, the German trio offered a concert consisting of mid-tempo clean sounds and vibrating bass, heavy beats underlying intricate arrangements and frenzy strobes lights. Nothing else but a pure ecstatic experience accompanied by a laser show that left us craving for more. 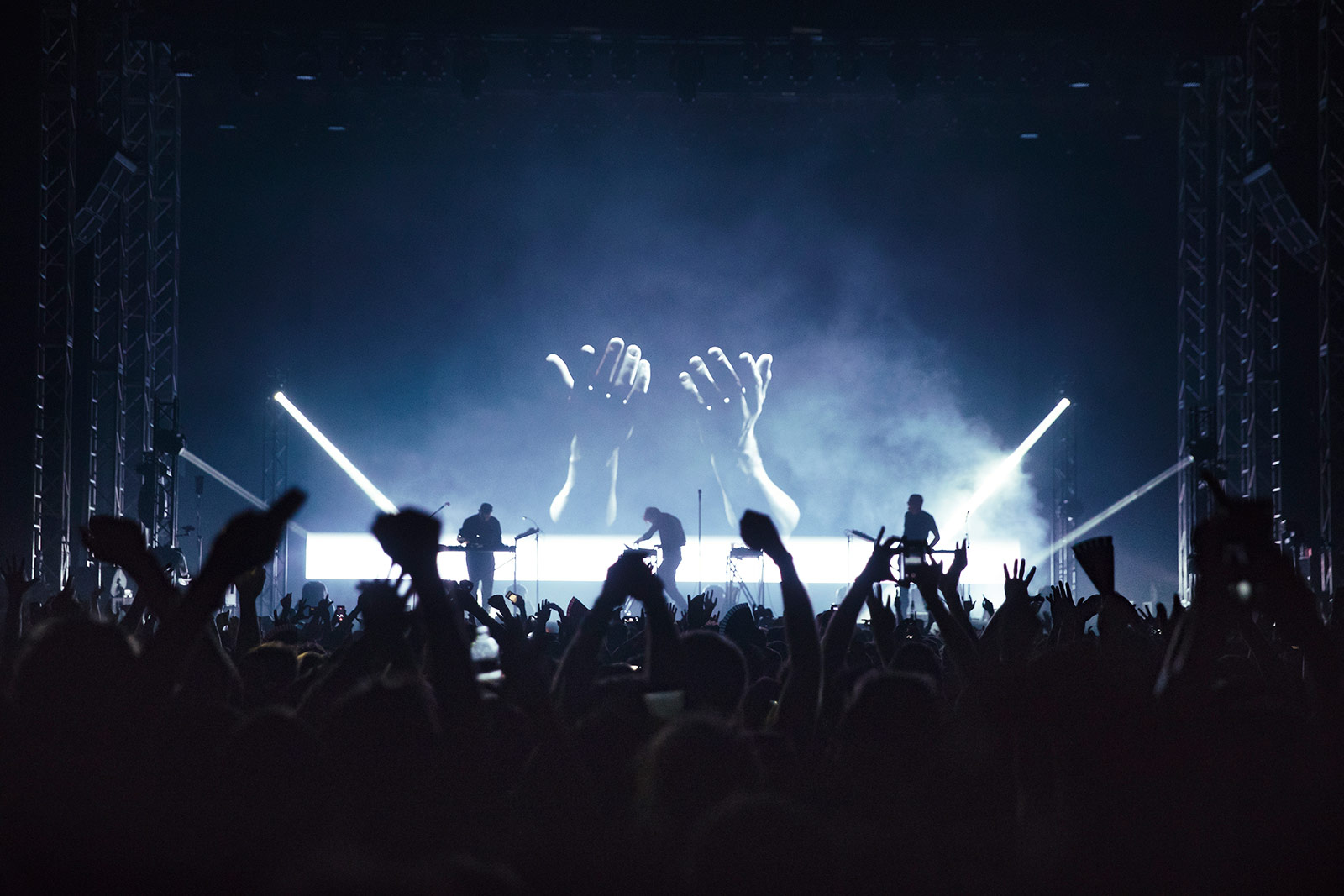 Playing on an open-air scenario – everyone was thankful for that after the heat experienced at SónarClub –, Nicolas Jaar summoned half the festival in front of him. Presenting Sirens for the first time in Spain, we were all looking forward to his set; and our expectations were fulfilled with a passionate performance, mind-blowing visuals, and electronic music at its best, balancing between the experimental sounds and the danceable, easily likeable beats. Jaar gave a master class on what to do when playing for such an exquisite and nonconformist audience. 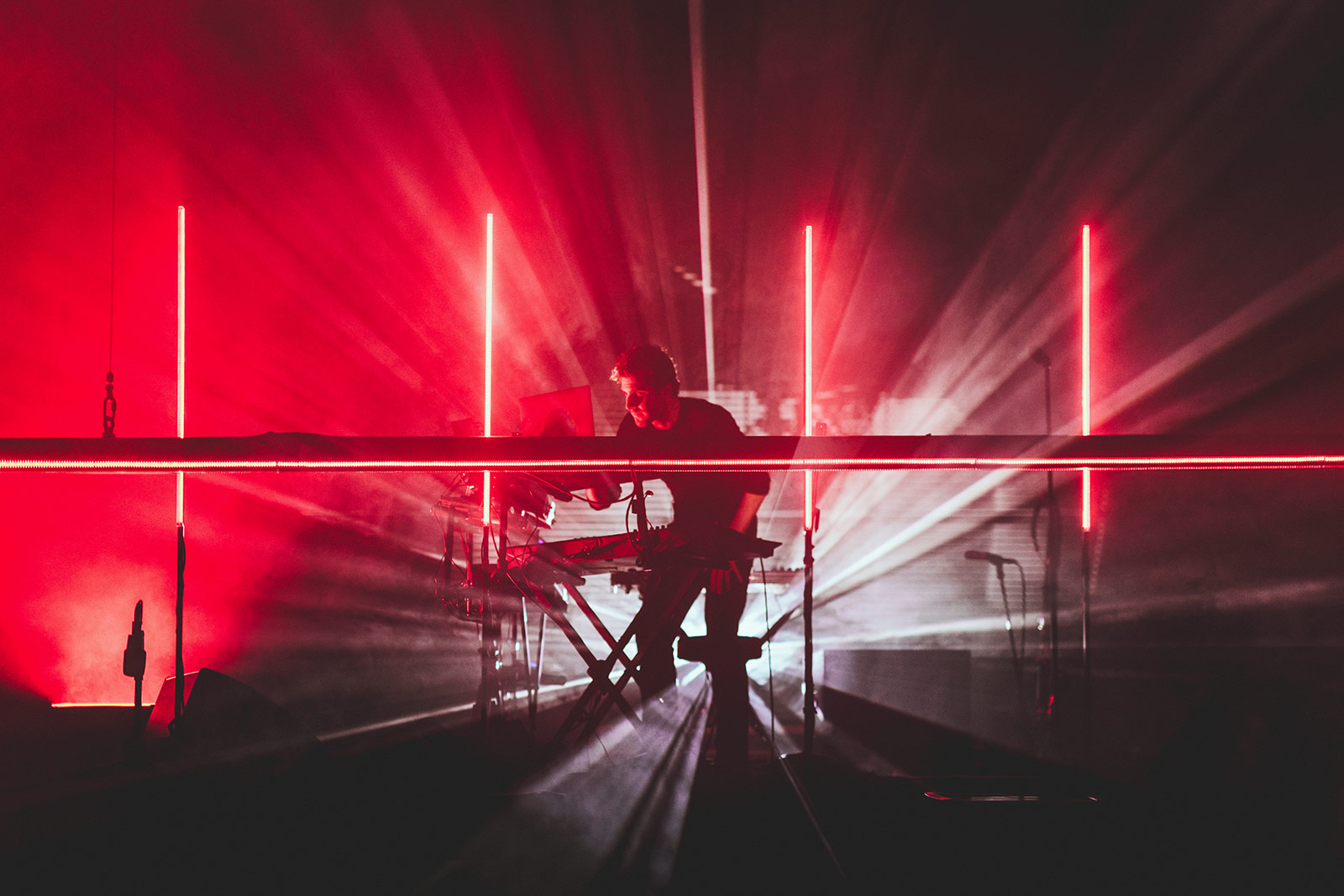 Derrick Carter, one of the most iconic DJs in the ‘90s Chicago scene, was playing at the festival for the first time. And he didn’t disappoint. His set was everything from funky to jazzy, including some trashy and techno-filled moments in the middle of the performance; happiness and good vibes floated in the air. On the other hand, Soulwax was also great. The band started with the three drummers coordinated to make the audience feel the intensity from the very beginning, and then the rest of the formation joined them some minutes later, getting everyone to dance non-stop until the end. 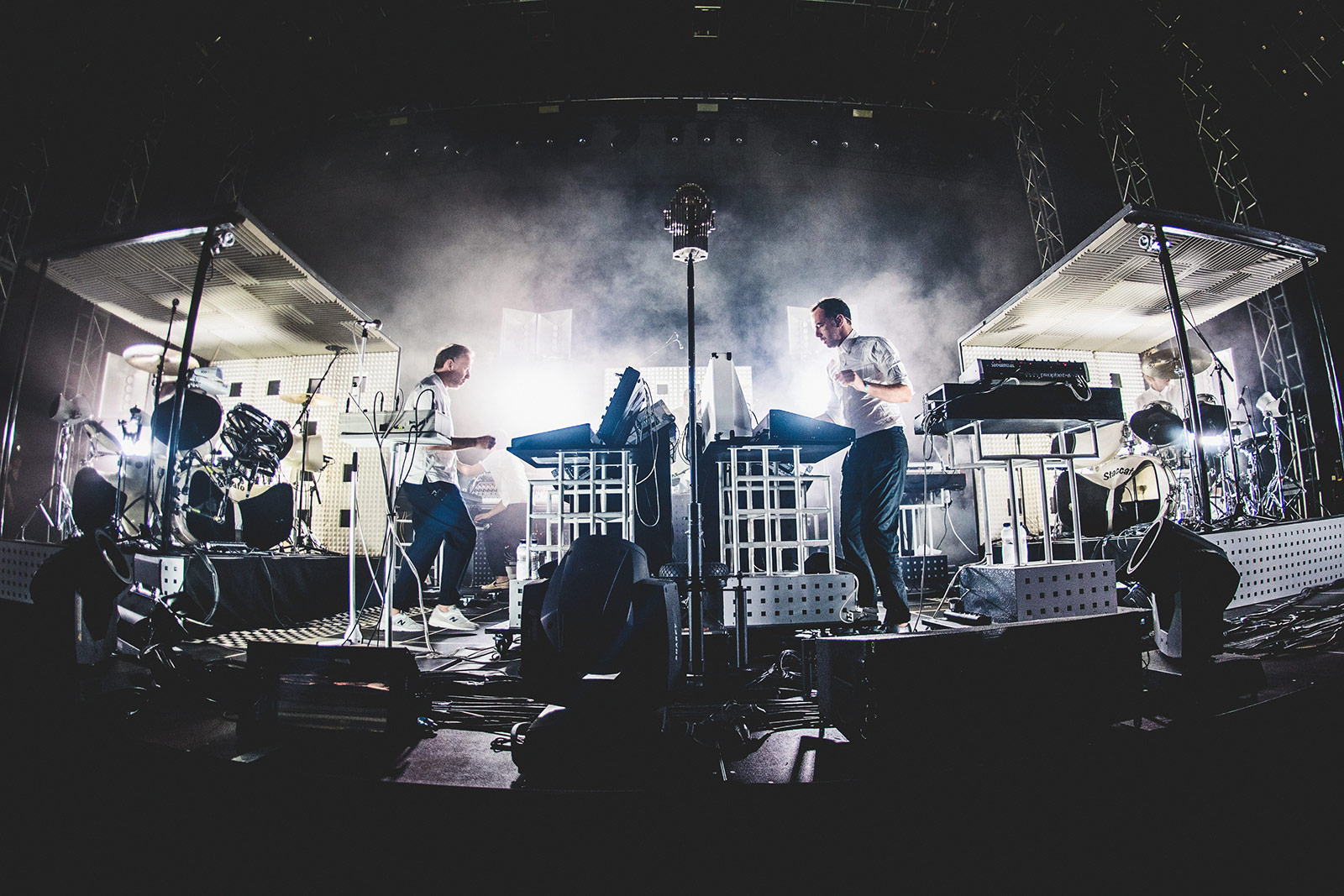 To end the night, our hearts divided between Nina Kraviz and Dubfire. The first started a bit weak and with some technical problems, but she’s a veteran so she knew how to recover fast and finally stepped up to offer a wonderful techno set. Acid, industrial, dark; we heard many different beats, but all of them turned us wild as the sun was rising. Dubfire was also one not to miss. His set was even trashier, the music louder and the people crazier than we expected; but we loved every second of it!

But the first highlight of Saturday was the show of Nosaj Thing + Daito Manabe, based on the interaction of twenty-five projectors and twenty-five mirrors concocted by Japanese artist Manabe. For once, visuals were not here to escort music, but to reveal and exalt it. A sensorial and visual trip that blew our minds away while techno beats achieved to show what the future of live sets will be about. Pure avant-garde, in the best sense of the word. With his red hair and the short that matched it, Stephen Bruner aka Thundercat electrified the crowd later that night. Performing at SonarDôme, within an extreme temperature, he rippled his guitar until spreading out some inimitable funk. A crazy energy that put the public in trance. 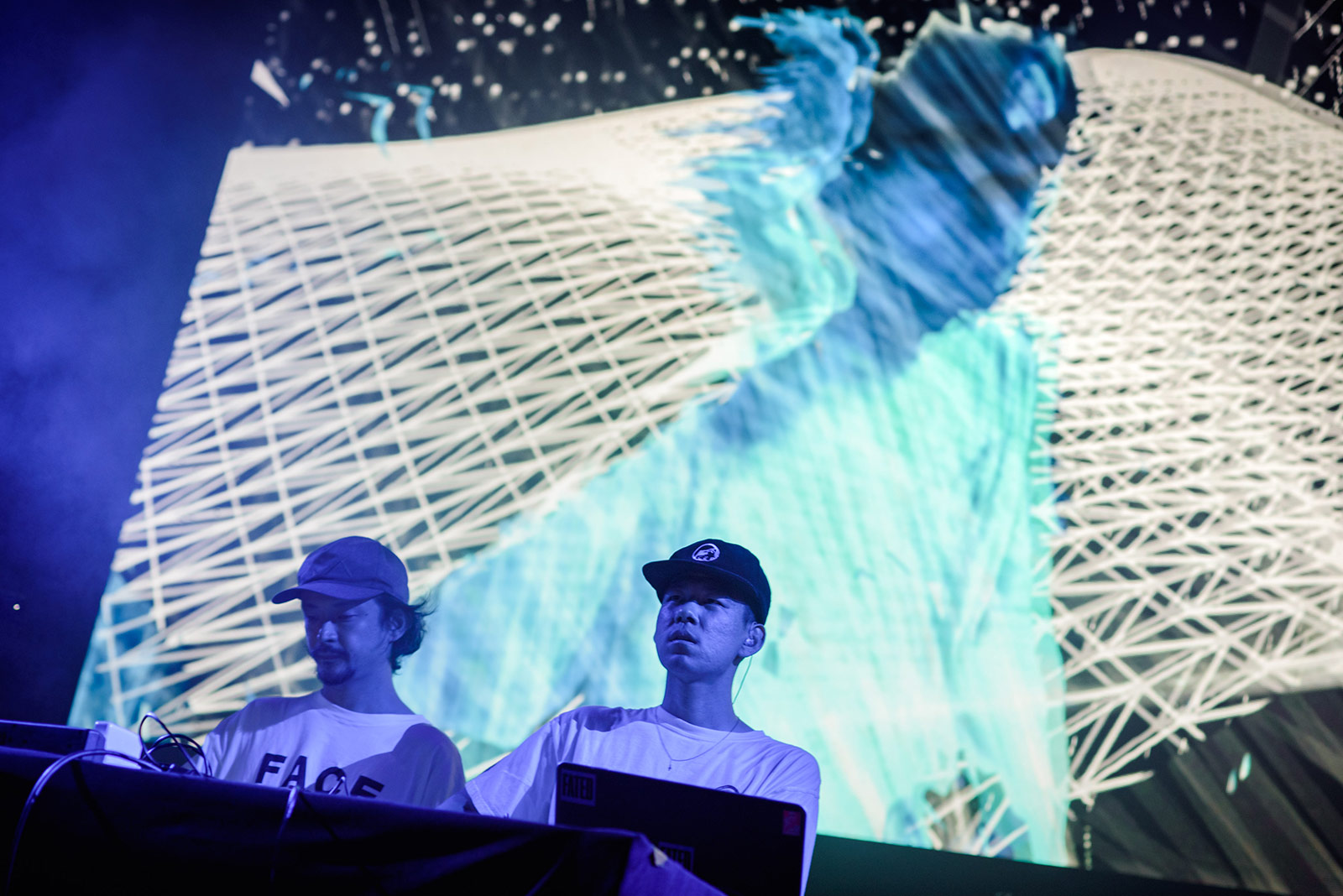 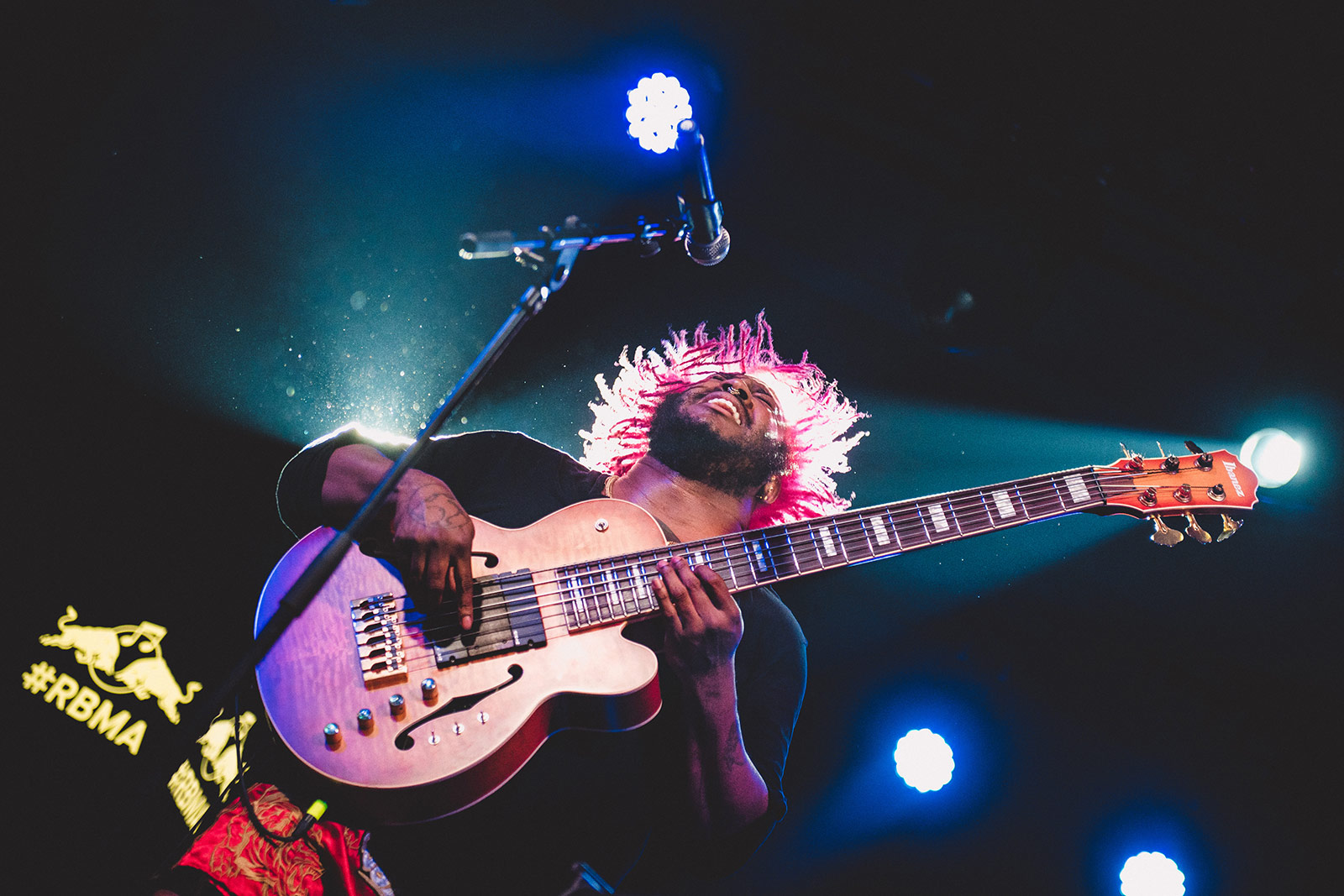 At Sónar by Night, almost everyone attended the concert of one of the headliners: Justice, and their recognizable mise-en-scene. For those who thought French people didn’t know how to kick off the beat, the duo was definitely there to prove them wrong – they held the drop before swinging We Are Your Friend. Simply triumphal! A show where music and lighting created a wild atmosphere that nobody in the room could escape. 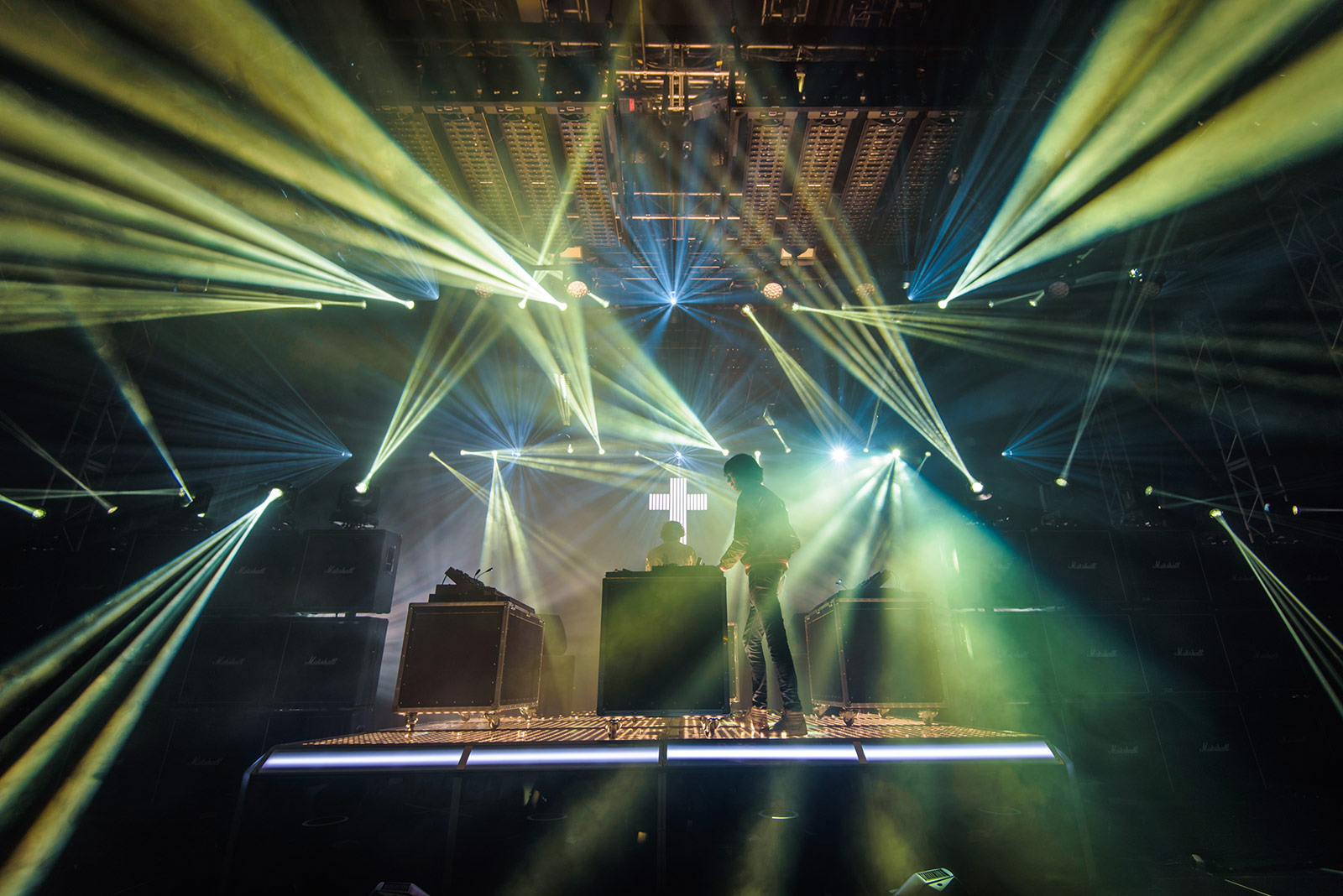 After them, Avalon Emerson & Courtesy composed an unprecedented electropop-yet-psyche tandem to which everyone danced. The female duo presented electronic music at its best, which was the nicest way to prepare ourselves for what was coming later: Vitalic. The French producer was presenting his latest album, Voyager, in front of an audience eager to enjoy his cosmic house music. Nobody was disappointed: he turned the stage upside down and made us travel through space with a very refined set.

But our hearts were divided, once again, and had to also attend Eric Prydz. And thank God we did! The audio-visual show had no rival: the laser cannons didn’t stop changing the space from a blue geometric box to a techno-apocalyptical green avalanche. It was simply tremendous. And the music? As hard as you can imagine. In the Resident Advisor scene, the never seen b2b Daphni & Hunee were delighting a pretty lethargic crowd under the sunrise, who ended up crazily bouncing thanks to the full energy of their delicately crafted set.

To conclude that epic days concocted by the great team of Sónar there was no other than The Black Madonna. For those who still ignore it: yes, she’s not black and she’s not a Madonna. Yet the American DJ knows how to throw some pretty acid rhythms to make you melt with people, encounter unexpected feelings and bounce until your legs ask for some rest. The only thing, perhaps, was that the closing track, Here Come the Sun, was too obvious for such a sweltering festival. Nevertheless, everyone enjoyed the best closing imaginable.

And after such a great and tiring experience – we’re still hangover –, the only thing we can do is wait for next year’s edition, that will mark the 25th anniversary of the festival. What can we expect? We don’t know yet, but we’re sure it’s going to be the wildest experience of 2018. We can all just close our eyes and pretend it’s already June 2018. 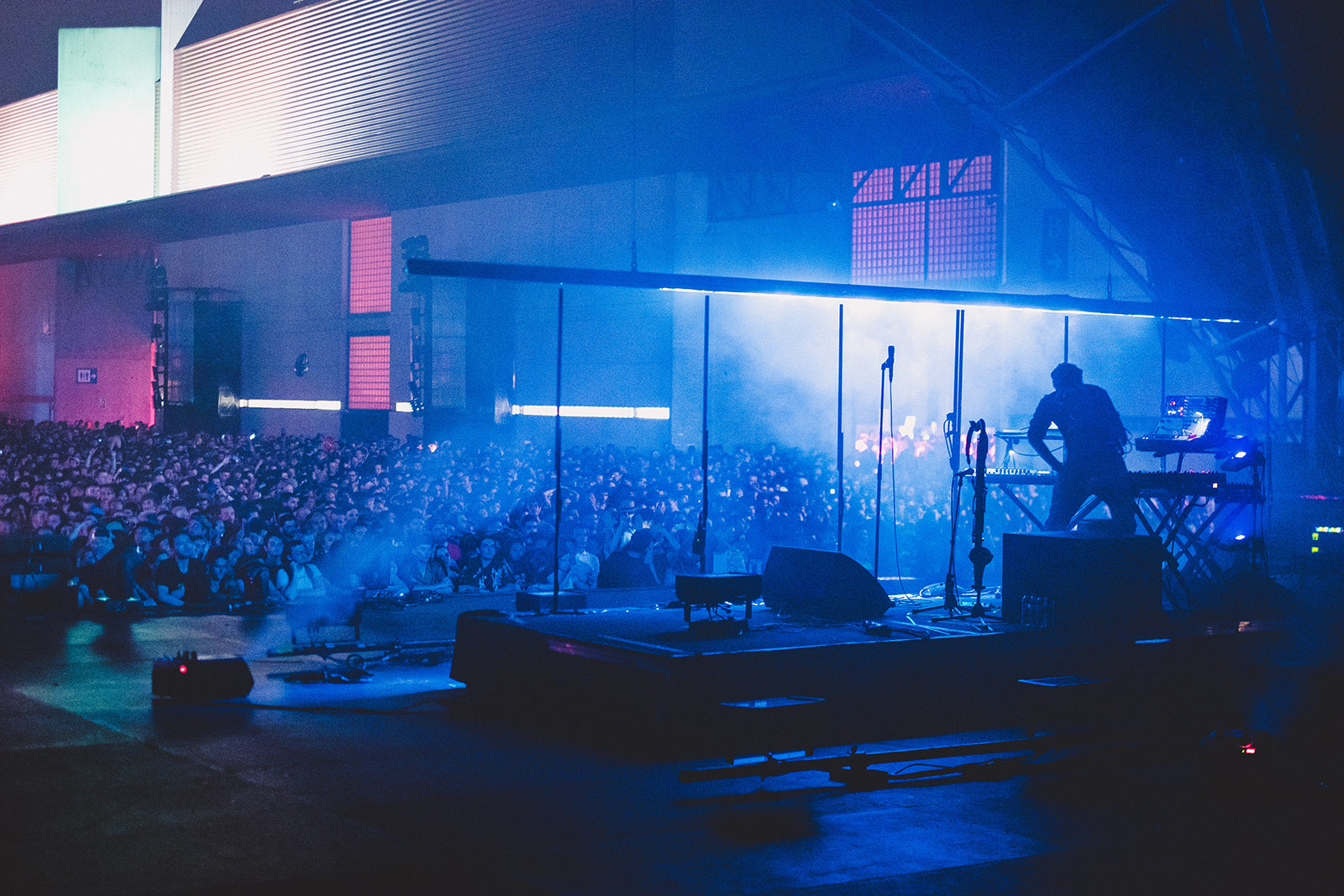