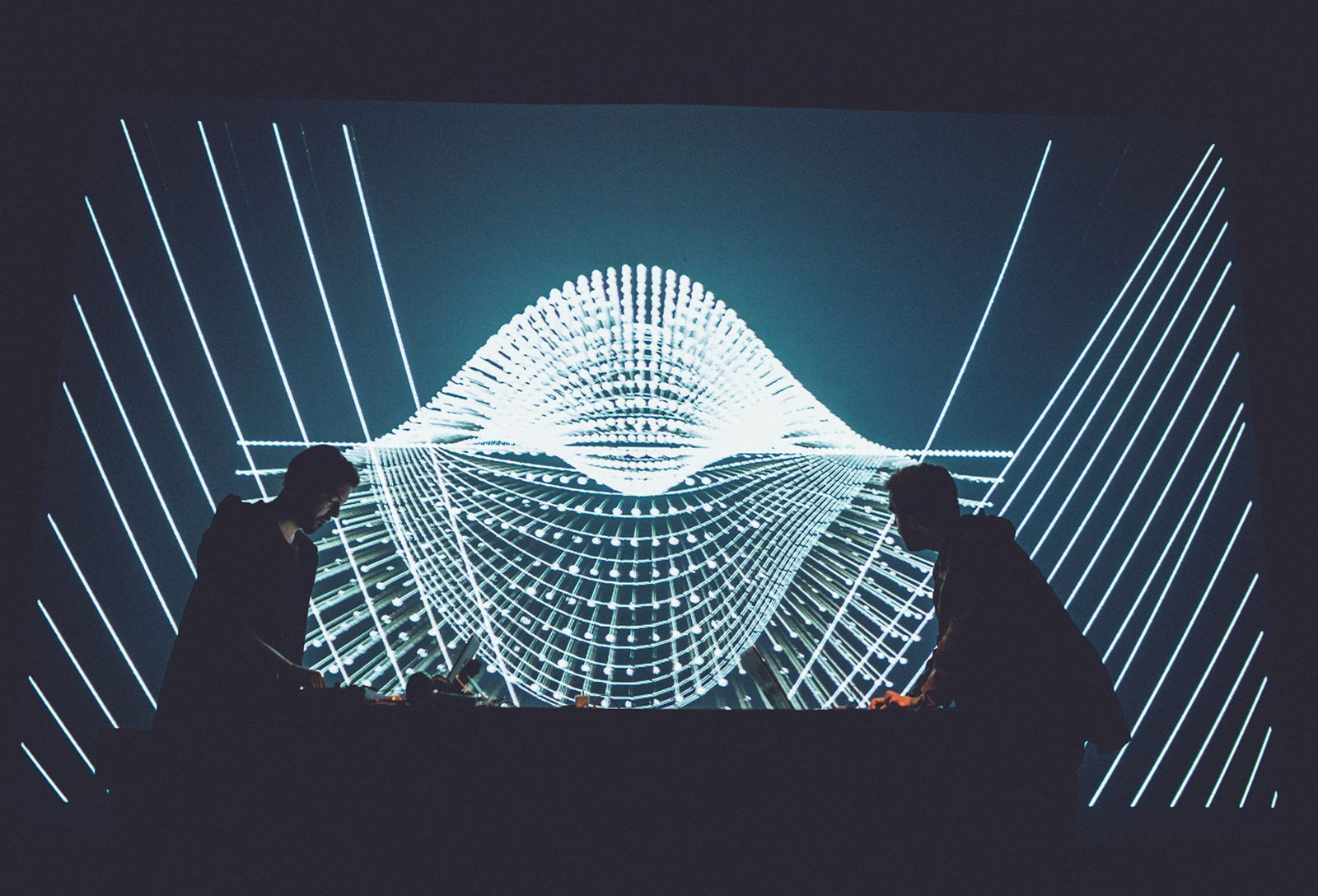 Behind this dazzling performance are two Portuguese artists: one is Miguel Neto, the sound designer; the second is Rodrigo Carvalho, the visual wizard. Their idea consists of three acts to tell the story of Boris, the flying chimpanzee – and luckily enough for us, they're performing at Sónar on Friday June 15th!
Multiverse broadcasts a story pretty hard to believe: Boris, the cosmonaut chimp supposedly sent by the Soviet Union to the Moon in 1969. Miguel Neto and Rodrigo Carvalho imagines an unprecedented combination of music and light around three acts – the show opens on Boris' cosmic roaming; soon after, the duo structures through music the wormhole where he got trapped before jumping chaotically between multiple universes. Finally, the show encloses on a fantasy: Boris the cosmonaut chimp is well alive since he found the meaning of passing from universe to universe, not time. Imagined as an immersive voyage, Multiverse by Boris Chimp 504 also flirts with fiction and reality while testing reactions between audio and image. On Friday June 15th thus, for one hour, the Portuguese duo will simply blur the lines between knowledge and supposition since, actually, the story of the cosmonaut chimp was a satire dreamed up by American historian Dwayne Allen Day. 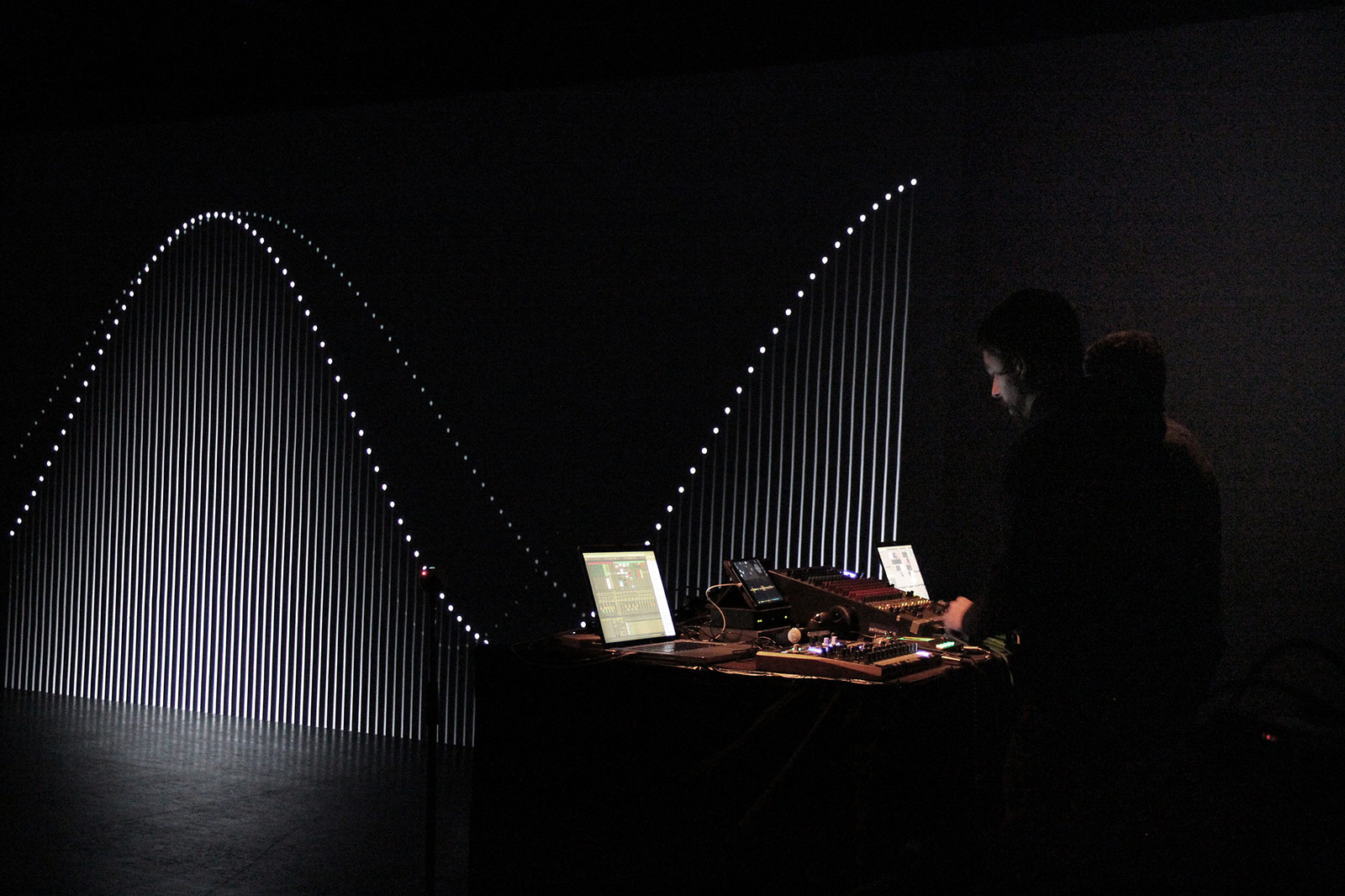 Let me start by asking you how would you explain to a layperson what is it that you're doing during your performance. It's sometimes defined as “the sound frequencies are analysed and used to create and control visuals.”
Rodrigo: Boris Chimp 504 is a live audio-visual performance. Miguel plays on stage live electronic instruments, while I manipulate live generative visuals that are reacting to sound. In that way the sound modulates what we are seeing on the screen.
Miguel: Also the generated visuals influence how sound is made since there is a lot of improvisation.
I find the orchestration you made of sound and visuals absolutely fascinating. Far from willing to put you in one box or another, I wonder how do you understand your own practice? Are you composers, or rather sound manipulators, or maybe some shamans illustrating the void's musicality?
Miguel: We prefer to think of ourselves as two guys that have been rehearsing a lot in these past seven years. This project started as a need from both to jam in an audio-visual way. I came from sound and didn’t know anything about doing visuals; Rodrigo came from visuals and didn’t know how to work with sound. It was the perfect match! After solving the technical issues we became freer to ride our sci-fi stories and let the imagination get loose.
Rodrigo: The live performances are created from improvised sessions where music and visuals follow a common path, but where nothing is predetermined. It is a real time interactive/reactive system between the audio and the image, between the human and the machine.
Your aesthetic is often defined as futuristic, but you're grabbing your inspiration from an event that happened in the past, almost half a century ago. How would you comment that particular understanding of the time-lapse?
Rodrigo: ‘Past futures and futures from the past’ are a big source of inspiration for us. The ‘60s and the ‘70s were a time with big expectations on the future, on space exploration and technology. If we take a look at sci-fi movies and literature from that time, we see that by around 2000s we were supposed to be living in a technologic-space-utopia, and to be part of an interplanetary civilization. So for us, it makes total sense to take this ‘past futures’ as a starting point.
Let's speak about the project you're presenting at Sónar: you started from the story of Chimp Cosmonaut Boris 504, who was sent in 1969 to the Moon.
You're constructing, deconstructing, in sum exploring the last broadcasts Boris sent from the moon, right?
Miguel: Actually what happened in the past – Boris Chimp 504 being sent to the Moon and staying there – was the starting point for us to grab this character and imagine what would he be doing while lost in space. Since then we’ve been telling tales of a supposed ‘chimp entity’ wandering around hyperspace, mixing real scientific known facts with our own sci-fi geek backgrounds. From the Moon Episode we went to Lost in Space and Kepler (among others) and we even started a series of interactive installations – titled Non Human Device – to give the opportunity to other people to enter and manipulate our ‘chimp’s world’.
Rodrigo: Right now on Multiverse – the show we’re presenting at Sónar –, Boris discovers that more universes and dimensions exist. There is not only one universe but many universes instead (the reason behind the name Multiverse). He discovers how to travel between space, time and higher dimensions, and how to jump between parallel universes.
What strikes you in this story until it becomes the thread of your performance?
What are your own beliefs on this story? Do you think Boris still lives somewhere, as part of a certain universal substance?
Who and/or what would you cite as references for this project?

Rodrigo: The project’s name was taken from a speculative fiction article written by Dwayne Allen Day in 1969 (titled Details of the Soviet Primate Lunar Landing Program). The article is about a cosmonaut chimp who was sent on a mission to the Moon and never returned, his last communication being sent from the Moon’s surface on July 7th 1969. The audio-visual live performance takes this fringe event as a starting point for its narrative, sound and visual aesthetics.
Other references include 2001: A Space Odyssey by Kubrick, Tintin: Destination Moon by Hergé, the series Valérian & Laureline, illustrator and filmmaker Enki Bilal, writer Philip K. Dick (specially it’s book The Three Stigmata of Palmer Eldritch), and Michio Kaku’s Physics of the impossible, among others.
Miguel: We definitely believe Boris is out there and we like to think of ourselves as his connecting team to planet Earth.
How do feel about playing at Sónar this year? Is there any particular expectation for you as being part of the festival? What does it represent for you to be there?
Miguel: I lived in Barcelona for nine years and attended practically every Sónar while living there, so being able to present our work at this year’s edition is definitely special. Also Boris Chimp 504 started in Barcelona when we were both living there, so it’s like coming back to the starting point of this adventure, but more structured and hopefully delivering a most intense immersive experience than the last ones.
Rodrigo: I have attended Sónar many times, and it has always been a reference for me on electronic music and technology, so I am very happy to perform this year. Regarding Sónar+D it is really special for me to see our name in the tech-show list, side by side with some of my favourite artists such as Daito Manabe, Anti-VJ or Nonotak. Sónar+D is pushing the borders and connections between music, arts and technology further every year, so I am really curious to check this year’s acts and news, especially Daito Manabe´s installation Phosphere, and also the immersive experiences at the new stage, Sonar360º.
The upcoming performance tends to match humans and machines in a way that surpasses human imagination. When watching your past performances, I see two experts in operating the machine, for sure; yet you two are so well coordinated. Would you agree that beyond the expertise of the machine, the emotion and the friendship you both share are what really drive your synchronization? How do you both interact live?
Rodrigo: Although technically the visuals are dependent from the sound, what happens onstage is that the reactive visuals influence in many ways the sound being produced. Miguel is constantly looking at the visuals and watching the effects that his sounds are producing on them. This allows him to explore and manipulate the sounds according to the visual output.
Miguel: Besides all the software and machines there’s a lot of human factor. With time we’ve managed to connect between ourselves in a way similar to the one jazz musicians use to communicate in a jam. The only difference is that here there’s a sound guy with a visual guy.
What would you like the audience to be inspired with, to feel, to think when experiencing your upcoming performance, or in any other?
We hope to engage the audience in multi-sensorial experiences and create an immersive space voyage. 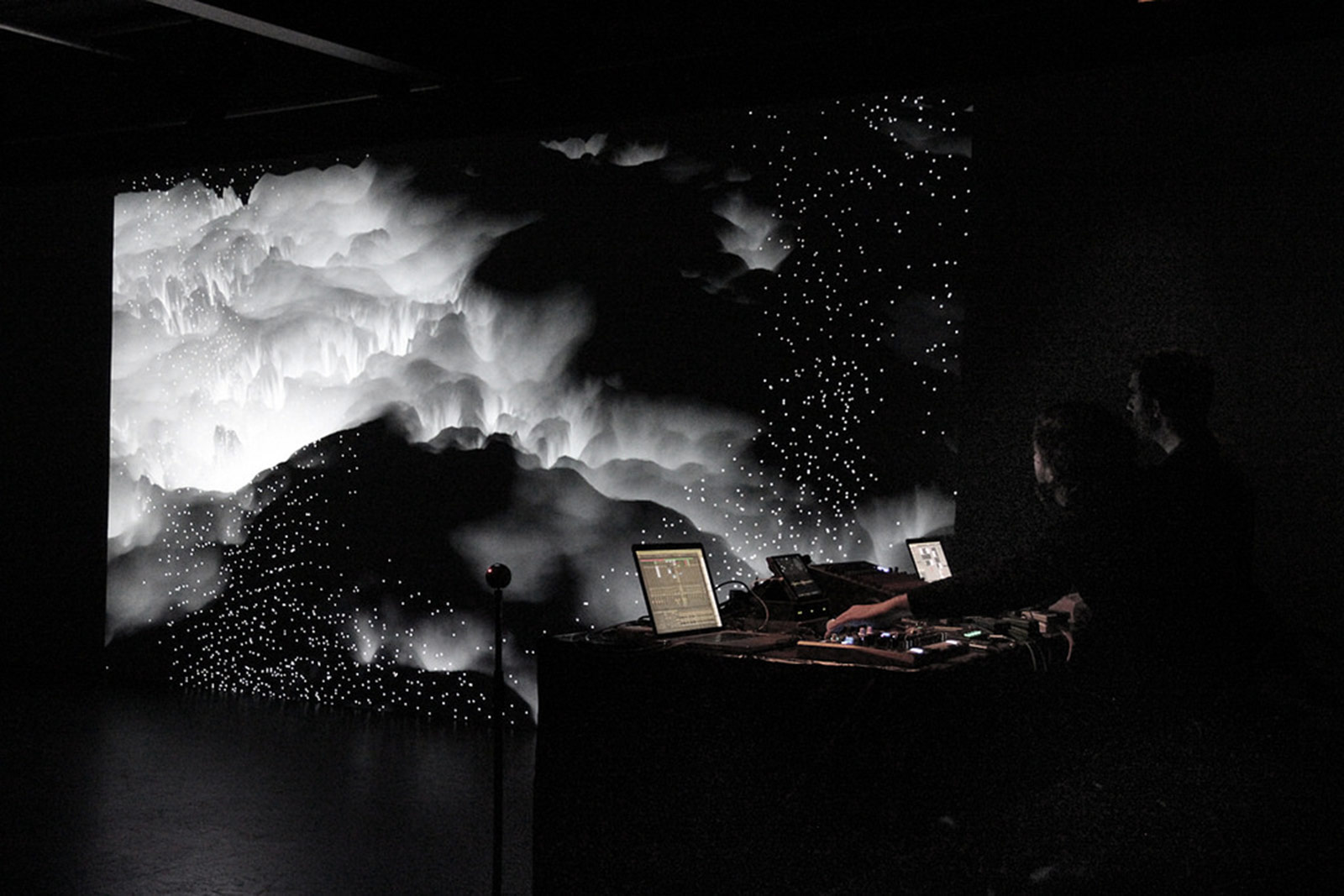