Parallels Between Art And Fashion 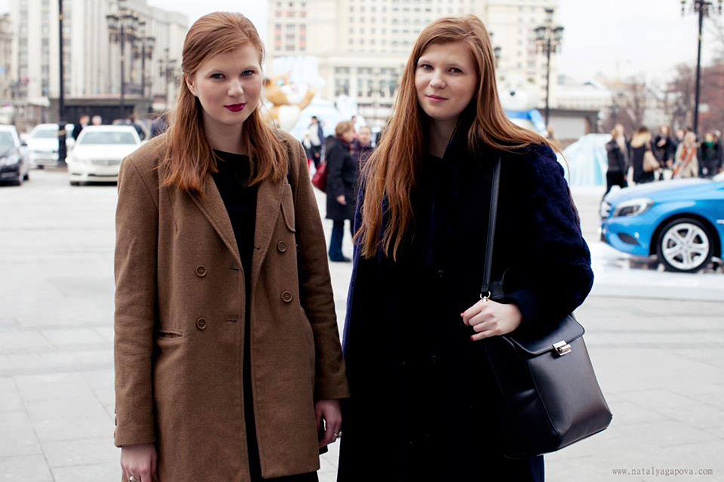 Past fashion season, where references to fine art have been seen almost in every show from Prada to Celine and Chanel, has given us the hope that it can be the beginning of a new chapter in fashion. Vika & Julia - two redhead sisters who also like to combine fashion and art in their inspiring illustrations and animations. While studying design in Moscow, these sisters are regular contributors to Vogue.ru , GQ.ru and other publications. They react on everything that inspires them and interpret it their own way in illustrations. Metal talked with the girls about their work, inspiration, thoughts about the past season and hopes for the upcoming "New era" in Fashion.

We know that after each fashion season, you usually create the illustrations of the most iconic shows. From the past fashion weeks, the first illustrations you created were from the Prada show. How would you describe this collection and when did the parallelism with the surrealistic work of Salvador Dali come out?

Yes, we usually try to create illustrations right after each season, we choose our favorite looks from the collections and begin to draw. We liked Prada right away, maybe because of the prints, which are quite close to our vision. Why Salvador Dali? Usually the theme for an illustration comes by chance. We recently watched "The Foam of the Days", so we might have been influenced somehow. Miuccia used the muralists' paintings in her collection, but we decided to show our vision in that case. Before, our illustrations were always static, but it became boring and we decided to revive them, now each one of them has it's own story.

How would you describe this season? Some people have already defined it as "boring and poor with ideas".

Well, that's probably true. We liked Alexander McQueen, but that is probably because we are huge fans of his brand and still dream about an internship in that house. To be honest, Sara Burton has really surprised this season, it was unexpected to see a bit of an aggressive mood coming from her. Besides McQueen, Dior was also a highlight. We are not usually that excited about the show, but this time because of the beautiful venue and the unusual cut, we really enjoyed it. Everyone has pointed out Marc's last collection for Louis Vuitton, but we don't know if it were the black color or the sparkles with feathers but personally, we didn't like it that much. To us this season seemed quite ethnic, but its difficult to talk about it right now, the awareness of what you liked usually comes a while after the season ends.

How did you react to Marc's departure from Louis Vuitton, and the fact that Nicolas Ghesquière is going to be the new creative director of the brand?

We love both, to be honest! Marc is not afraid to make any bold actions in terms of color, he is a great professional in his field, as well as Nicolas, but apparently his time at Louis Vuitton has been finished. We are living times of big changes right now. The past year has been rich in changes for a few brands.

I want to go back to Prada. Some editors have said the collection was some sort of satire on street style. Someone even called the styling of the show "Anna Dello Russo on fire", pointing out that Miuccia here was having a laugh on the over bored look-at-me phenomenon. What do you think about that?

We think that street style is something with an expiry date. This means there will be something new. In the beginning, it was interesting to see who was wearing what, but we've grown tired of it. Now, anyone can go to Fashion Weeks, no matter what he is doing and how good he is. It's all a little bit over the top right now.

Do you agree with the sentence "If Fashion is for everyone, then it is not Fashion"? How do you see the future of the Fashion Weeks?

We agree with that, but we are more fascinated by the styling. It is always cool when you are expressing yourself through clothing, showing the world who you are without even saying a word. We think the future lays on installations, where you can touch and look closer at everything. But in shows there is always a certain magic, when everyone is waiting for the next model to appear. The light, the music - everything is part of the designer's vision which he wants to share. Installations or presentations are not so emotional.

What is your inspiration apart from Fashion? What are your favorite film directors, artists, illustrators?

Inspiration is everywhere. We like going to exhibitions in Mosco, mostly modern art, James Turrell is one of our favorites. Besides, we love history, especially 18th century - where every element can be expanded for another couple of hundreds of elements, we find it very inspiring. We recently visited the Cirque du Soleil and were impressed. It was incredibly beautiful, a huge inspiration for designers! As for illustrators, definitely our favorite is Vahram Muratyan. Also,we really like street art… it's a hackneyed subject, but Banksy is one of our preferred ones, so glad he belongs to our times… he 's a part of history. It's hard to pick up one film director, but we do have two favored movies: "Christiane F. – We Children from Bahnhof Zoo” and " Farinelli ". Both movies manage to impress with the way the atmosphere of each era is shown, as well as the chosen soundtracks - an incredible Farinelli's voice and hits by David Bowie. Two completely different movies we love.

Right now everyone is talking about “the end of an era” and it is being said the definition of Fashion will change in the next few seasons. What are your feelings towards that? What do you expect from a "new era"?

We expect people to become more aware about shapes and silhouettes. Nowadays everyone is focused on embellishments, too many details, and that is not always good. You can be wearing a simple dress, but this might have an amazing silhouette. We expect designers to start thinking differently. Everyone is so focused on commerce now, leaving aside that there is an Art side to Fashion also.

Would you say that you prefer minimalism?

We love minimal details, but not minimalism in general. We just said we love the 18th century, but at the same time, our refrigerator is covered with magnets of Malevich's works. We believe that in every concept, you can find something close to yourself.

Many of your works have an ironic slant. Which would you say are your signature techniques, besides irony?

We try to always discern the main idea, combining Fashion and Art. We want to provoke a reaction, no matter good or bad. It's not just a picture, for that we already have photos. Many people have forgotten about illustrations. If you take a look at old magazines you can see many hand-drawn pictures, that’s what makes the magazine look alive, at least that’s what we think.

How do you see the future of illustration and animation?

We are looking forward to seeing more art and interesting collages in magazines. Technology is moving forward, we’ll see. Our animations are flat right now, but they can turn into 3D in the future, who knows. One thing is certain, as long as progress continues, things will change. 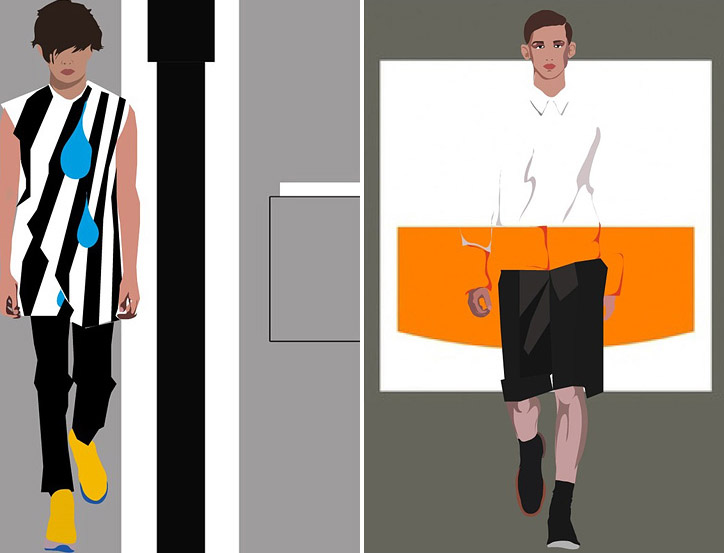 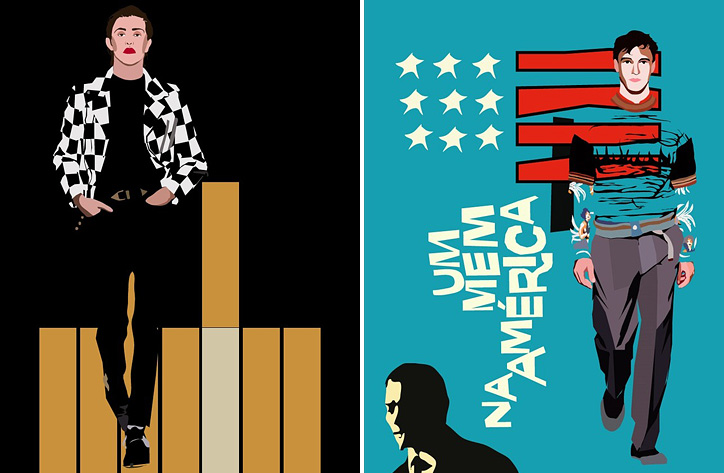 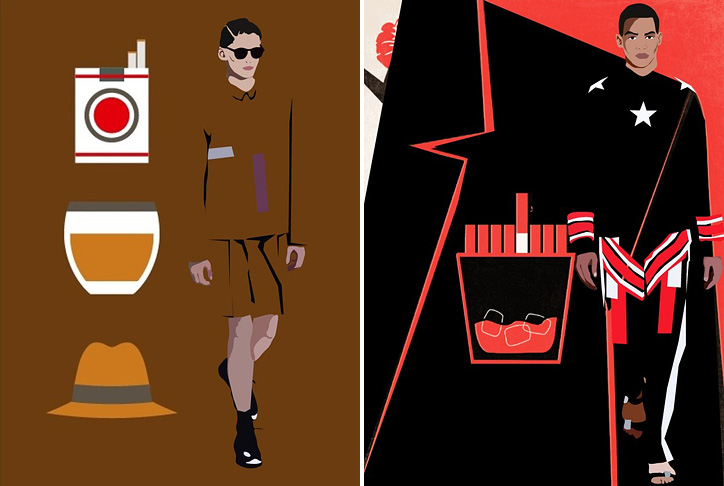