More Than A Promise 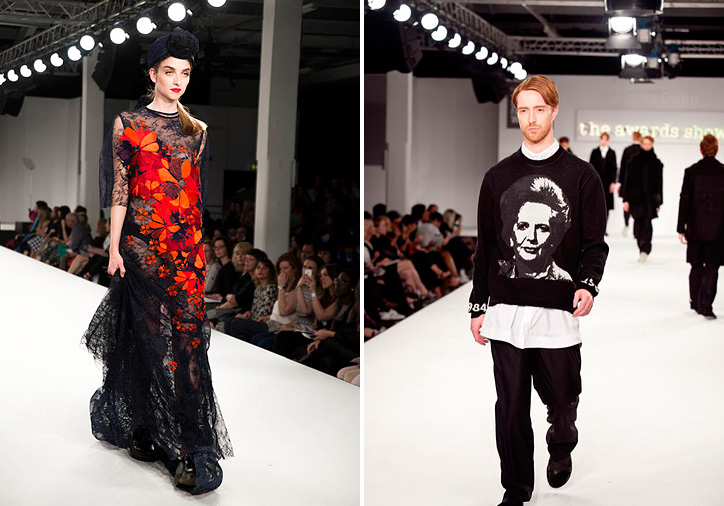 The spiral of Fashion is bringing a new order, and this is a relief. Look out the heart of London's most creative district, The Truman Brewery, where the most cutting-edge designers had a competition last week to prove that academics still have a lot to say. I may be biased but at times, over the past years, young talents were supposed to showcase their sometimes grotesque and immature proposals, which meant loads of creativity, experimental designs, instant visceral reactions and a certain lack of commercial vision; taking on PVC, ropes, wallpapers, slouchy trousers, water repellent jackets, impossible platforms…. Quirky pieces, kind of whimsical, as a reflection of the creative, fun and boozy ideas that are projected onto the youth's statements.

But just when you thought you had seen it all, Fashion can suddenly surprise you, and that's precisely what happened in the latest edition of the Graduate Fashion Week, where more than 1000 graduates from the most influential and renowned UK and international universities, showcased their work. Attracting over 20,000 guests each June since 1991, the event featured 22 catwalk shows, exhibitions from over 40 universities and an acclaimed Gala Award Show.

In such an inspiring spot for industry talks, fashion forward workshops and reflections about the academic system, the memory of the late Louise Wilson from Central Saint Martins or the sorrow for the retirement of Wendy Dagworthy, made us think about the new influences and directions that are yet to come.

Graduates approached design with aspiration and fantasy, a reachable fantasy. Conceptual works which are not promises, but a reality, as they were mature and perfectly executed. These students are the future of fashion and it´s comforting to find initiatives which promote young talent, as well as having the sponsors (those magic angels) pulling for them and contributing to keep the business of Fashion alive.

Designers marked their territories reflecting a variety of influences, from Cuban beats, to 1960's gloss, to classic sportswear, to clean minimalism, to heritage knitwear and love of contemporary art and rock 'n' roll pieces or kaleidoscopic vibrations. The collections had their share of designers with heavy-handed ideas, but also plenty of others who played it safe. The best collections combined the artful and the playful to great effect. All collections were distinct - and distinctly talented.

Bath Spa University's Grace Weller was the top prize winner graduate showing a collection that featured navy mesh in deep blue sheer materials and lace dresses highlighted with a very colorful floral detailing. The lace stamped of delicate and feminine flair mixed with vibrant red and orange, will rarely be forgotten.
Other prizes were awarded to Aimee Dunn from Nottingham Trent University, who won the menswear award, exhibiting a monochrome and oversized knitwear collection, very edgy and political as well, as messages against Margaret Thatcher were embroidered into the backs of the jackets and also the face of the ex-prime minister was knitted into a jumper. Making noise was part of the show, never knowing whether it's a sincere rebelliousness or simply affection.

Designer Camille Hardwick from Kingston University, was a finalist of the show, using vivid orange in a constructed look which included transparent geometric-patterned outfits in orange and magenta around the hemline with a fantastic panoply of arts and crafts touches. Keizai Newlove from Bath Spa University, finalist too, stayed loyal to a palette of chalky and metallized pastels. Chloe Sanders and Keishin Hoshiko Barrett also made it to the final round, combining sophisticated patterns in contrast with the intense pink of Lauren Lake and her XXL treated fur coats. A warm feeling to energize the winter time.

Lucy Helen Crossley's collection from Birmingham City University presented tailored roots in black, mixing tailoring with sheer, second – skin layering which revealed part of the body. Earth tones followed throughout Ines Arconada Vazquez's collection who cleverly mixed different materials to create a modern spin. The collaboration between Martha Thorpe & Helen Kirkum brought a new feeling for graphics, with a move away from digital towards a more naïve print form, using an array of innovative garments such as deconstructed backpacks showing how transformative fashion can be. Shengjia Sophia Ding introduced concise and clean clothes combined with classic looks taking some risk in the use of color.

Bold and edgy, the tailored proposal of Fiona Bell from Bath Spa University, was much in evidence on the catwalk, finding a new generation of admirers of the two-piece. The print used makes one think of innovation developed for maximum impact. Clean lines and A-line silhouettes showcased the ultimate style statement of Francesca A Henderson, including monochrome in white and oversized pieces in contrast with Stephanie Colling´s sporty proposal, interpreting a fragile feminine frame on boyish spirit. A casual trend with just the right amount of sports jackets over soft dresses constructing a chic sportif look.

Charlie Watson from De Montfort Countour, introduced nightwear in a deliciously tactile collection, sweetly romantic, that featured silk, lace and embellished floral applications, exploring the duality of sensuality and simplicity, extended to rich embroideries, lacework, and some hard – edged graphic cuts. Cute and girlie dresses to create a flawless look for a princess who loves pink and latex, Charlotte Lewis' collection was inspired on the cut out trend that has been bubbling for some time, and is now reaching its tipping point rolling into the mainstream.

Attosa Nikkah broke through the Northbrook show, sending a message of luminescence in terms of color supplements and patterns with an added dimension. The accessories came to complete the surreal medical masks and headpieces, in the most eccentric and optic shock of the show. Lucie Bloomfield's aesthetic was directly inspired on the sixties, giving it a twist with neon pink socks and surprising color combination. Also, in a very refreshing approach, Sarah Kilkenny featured striped knitted dresses, mixed in different colors, slipping into something more comfortable, very edgy yet restrained and classic, as stripes are such an eternal motif so as the aseptic palette in white, selected by Emmie Vincent (a little relief from prints fatigue).

Naomi Valentine took on futuristic looks, using metal´s soft-core side for an urban-sporty girl. Oversized jackets and wide leg trousers translated into an effortlessly chic look. Shiny materials which absorbed radiant energy projected on the catwalk, a contemporary review of the baseball jacket in a cool-relaxed attitude. Jessica Tarisch's clean lines and soft silhouettes presented the ultimate style statement. An injection of pretty, very much focused on the feminine silhouette combining high-waist trousers and silk blouses to soften the masculine tailoring. Alexandra Henkes' menswear collection was inspired by ephemeral nature in a palette of earthly tones introducing a modern point of view in the use of the fabrics and techniques to create a grandiloquent effect, thinking outside the box. Feeling everything but staying simplistic, Perelli Gonzalez´s collection, who mixed Cuban and African culture, in a cocktail of bold fruit and flower designs in orange, yellow and green ethnical prints.

All the collections distilled different ideas of what modern dressing can be, putting a hightlight on textures, volumes and color combinations. They are the new guard blowing with the wind of change and the restless illusion of the beginners. 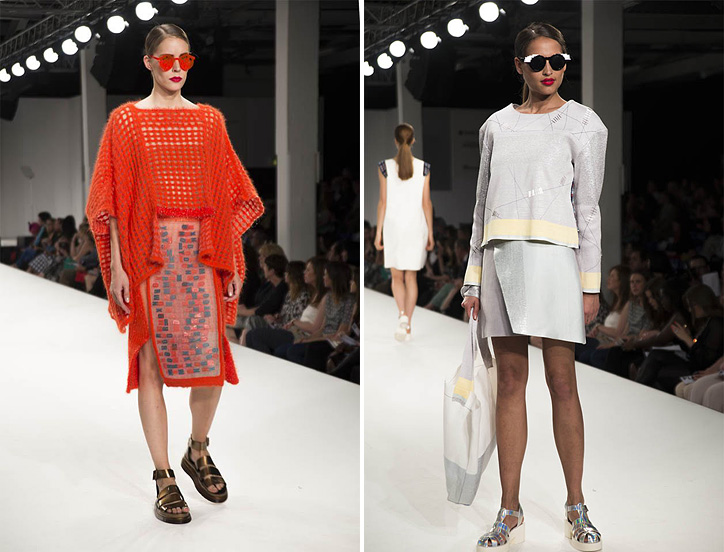 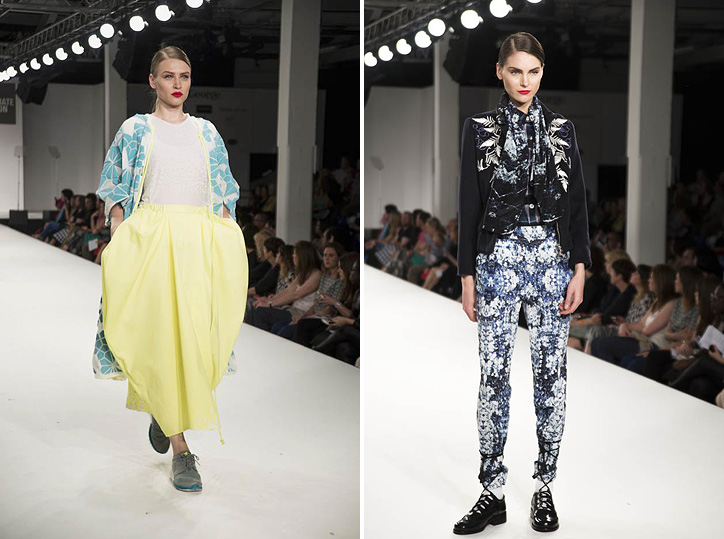 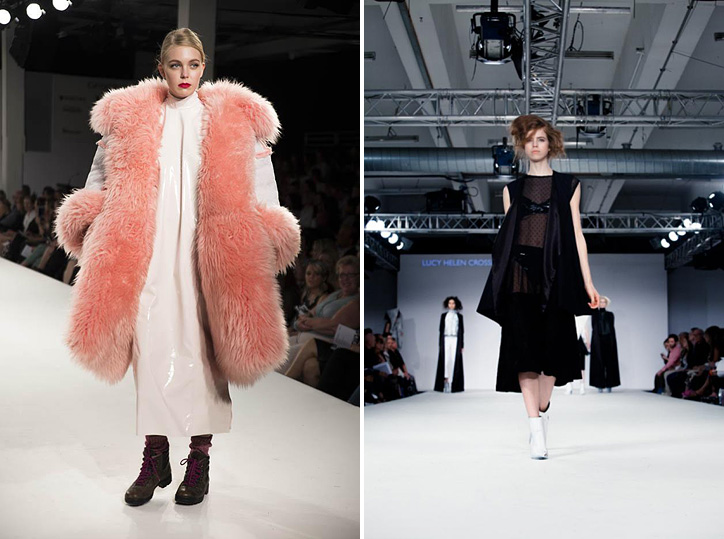 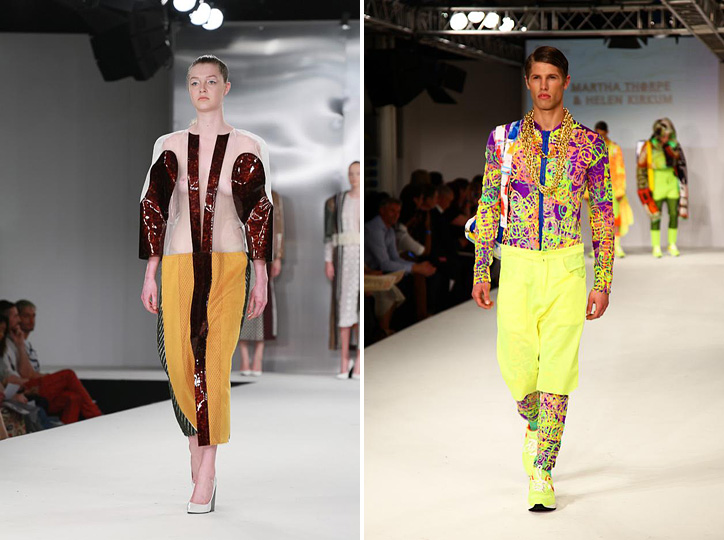 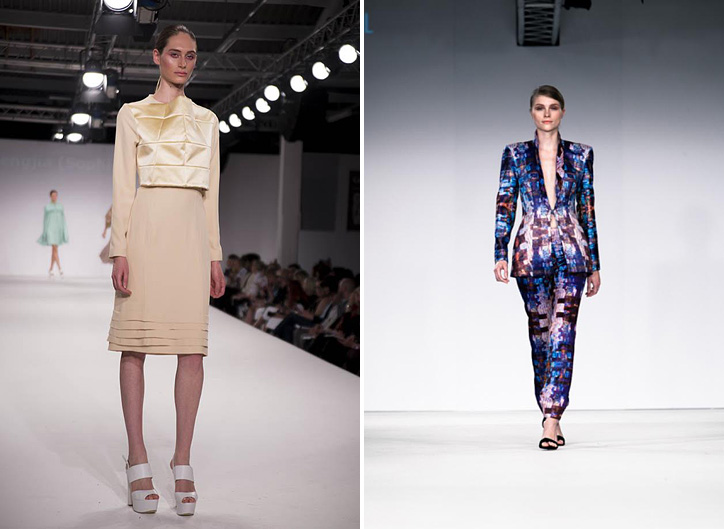 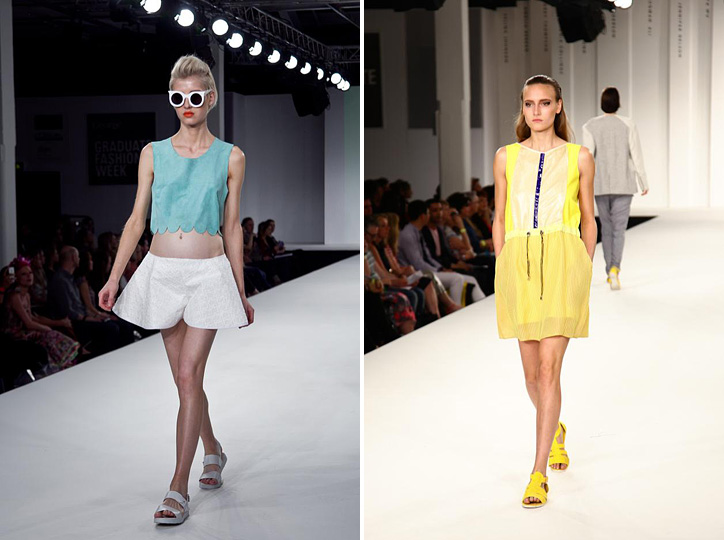 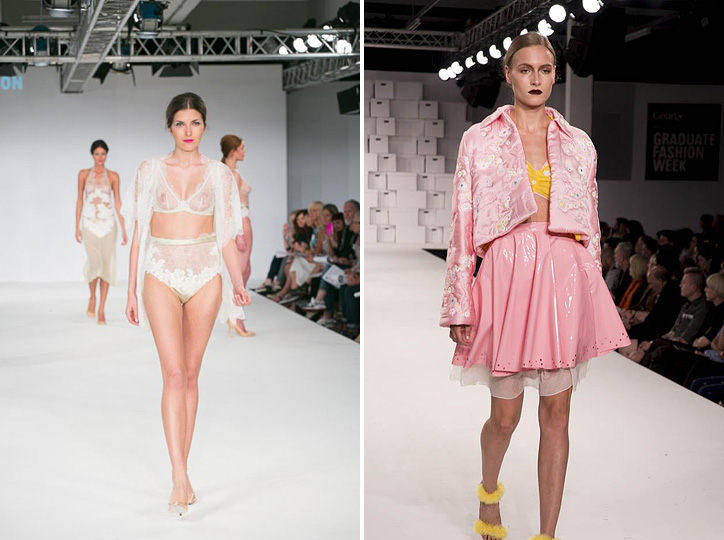 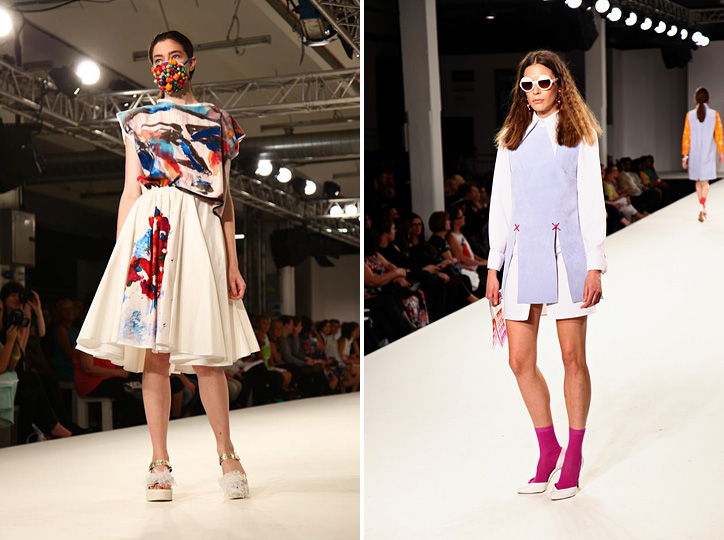 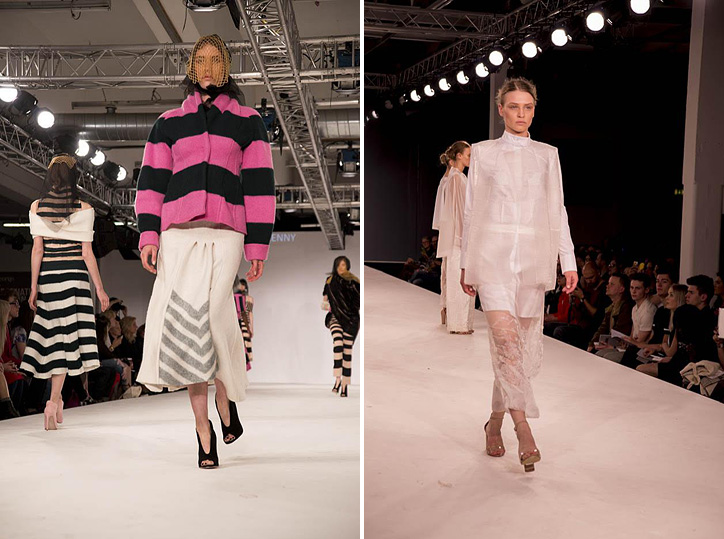 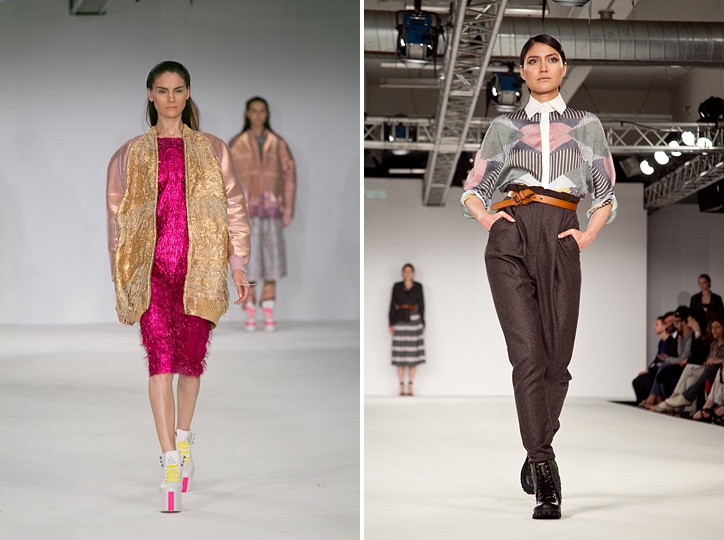 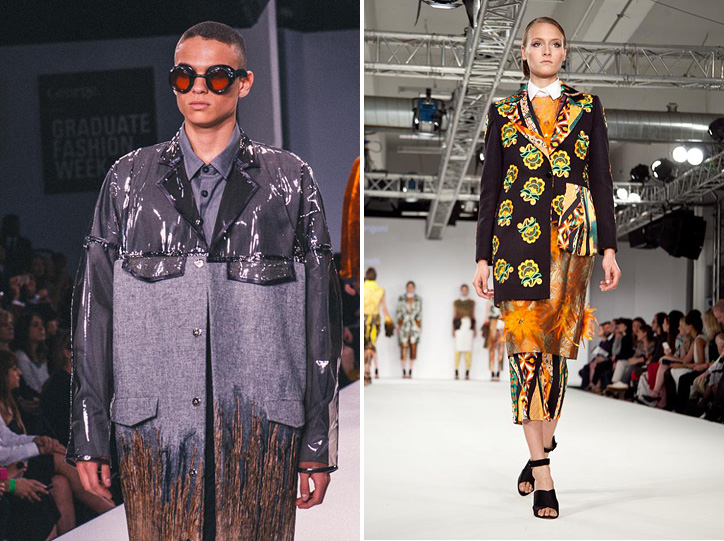