Where The Black Things Are 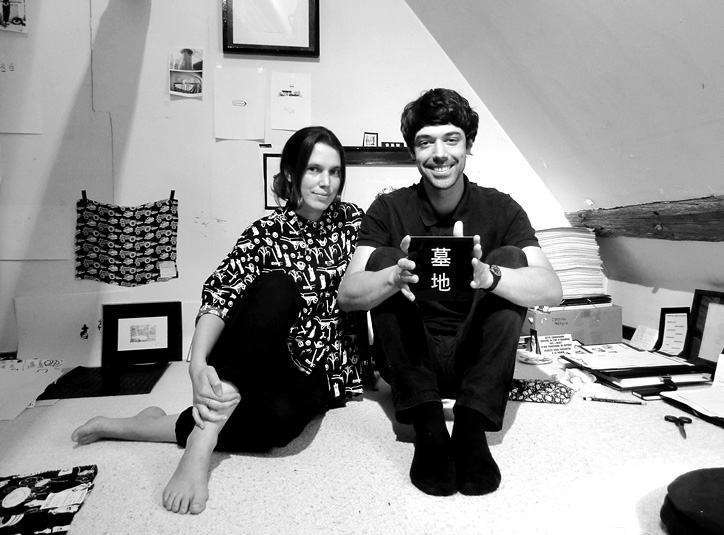 It is at the bend of a graveyard or in a place frozen by the course of time that you will possibly bump into this singular couple: Ophelie Klere and François Alary from the Dévastée fashion project and the side-project “Après la Mort”. For quite some considerable time, the partners have been gaining a strong rising recognition with their sharp “chic & simple” creations; which will not go unnoticed anymore. So it seemed as the right time to focus on this two-coloured poetry influenced by oneiric flashes. It is with sincerity that François & Ophelie agreed to play this little Q&As game.

"Dévastée" or "Blasted2", isn’t it overly violent? Especially if we are referring to Sarah Kane’s play?

François: According to me, Dévastée accurately depicts reality. It is the new balance point following destruction… When silence comes back and nothing can fall back to ruins again. It is a brief moment, a short time that only happens once the storm has faded away. Thus, we could say that the landscape is blasted. So it is not violent, but on the contrary, something very serene: it is a respite. Henceforth, that violent feeling is quite far away and there is nothing to fear anymore. For example, it takes a long time before a forest reduced to ashes can burn down once again.
Ophelie: Strangely, when we initiated the first Dévastée collection, this adjective was barely used to describe a personality or a mindscape. It was a word used in the landscapes descriptions. Since that time, it has become a fashionable expression and frequently ill-advisedly used: always in a very vulgar and common way. In our point of view, it is not exactly the same thing: we prefer its poetic evocation.

Spirits, ghosts, lambs… elements regarding the sacred! Is it part of your imagination? What are your beliefs regarding that entire universe?

François: I do not think there is an intellectual approach in the frame of my work. I only react within my own context since the beginning. With five years old I already began to draw cemeteries and smiling graves. They are in my head and all around me! It is a complete obsession! When I was a child, the walls of the house were built with old memorial headstone fragments, as it had once been an old graveyard. All these names and dates on the walls were fascinating to me. I remember being extremely excited when we found bone pieces and teeth on the ground. It has all contributed to my present perception of the world and I guess that, in a way, it is this connection with cemeteries that explains this imaginary world. It is definitely less metaphysical than what it seems.
Ophelie: Personally, I am convinced that life and death are not that different: we are a bit dead already. We know that our perception of time and space is an illusion. It seems obvious to me that life and death follow the same logic. I guess that it is a bit stupid and simplistic to believe that we are alive and we will die some day.

It’s curious, I always get a fixation to visit all churches I cross on my way. And you feel an attraction by graveyards…

François: The graveyard is a projection of my mental workspace. It is very hard to explain. For instance, I find it very difficult to watch a science fiction film because I am never able to identify with any character. However, as soon as there is a cemetery within the storyline, I identify with it, the place and the atmosphere. It is then when I can experience some particular emotions. Concerning funerals, I detest them! They are so dramatic and full of feelings of pain. It seems to be a terrible and unbearable aesthetic conflict within the graveyard environment. I can’t tell you where I wish I was buried but, in fact, it is no problem for me as I am at a cemetery already.

Please, slake my curiosity. "Live Fast, Die Young" is not in your future intentions? What about your hereafter plans?

Ophelie: No! This “pipe dream” has nothing to do with us. Everything we are told regarding “death” is such a cliché. Artists used this common saying a lot to create some strong sensations and feelings up to self-destruction. Sometimes it can be fun, but when you are used to be confronted with that, it can be tedious; especially if we have a look at the past few years. Even nowadays, this present “punk wave” is witness of savage and immoderate lifestyle; which likes flirting with death. We can see it everywhere and it seems to still enthral a large audience. But the attractive “Death” isn’t that one: it is the inner one!

To talk a bit further about your fashion project: what about your unisex collection “Après la Mort”? Will you produce a Dévastée collection for men? Have you some other ongoing projects?

Ophelie: We work a lot out of the fashion boundaries but Dévastée is our main project and remains the most demanding of all our activities. Aside, even if we are particularly fond of this collection, we were obliged to put Après la Mort in an inertia state. As it turns out, it has all grown too fast for us. We have reached the point in which we can become entrepreneurs from the business point of view, the commonplace of those designers who proclaim that the creative angle only takes up a little percentage of their global activity. For now, we just came back from Japan where François got a personal drawing exhibition and where we are setting up a range of paper shop and tableware products. We are in the process for an editorial work as well!

An imagination that mixes biblical symbols, everyday life and childish smiles: of course in black and white! It is almost dogmatic: joy & melancholia... Where did this come from?

Ophelie: The whole of it is very joyful and I do not think there is any melancholia to it. It is obvious that when you’re working hand in hand, the most difficult thing is to reach agreements. We are really very different. As for me, I am definitely more rational than François. We mostly work around repetitive obsessions. It must be noted that we are not quite fickle for people who are working in the fashion industry.

“Skin” (1995) wouldn’t be the anti-dévastée? What do you thing about this idea? What about your favourite movie?

François: Even if it is a long time since I last saw it, I remember Skin as a very beautiful movie. It is funny that another among my favourite movies, which strangely shares many similarities with Skin, is Pig of Rozz William & Nico B. There images are wonderful and the soundtrack is brilliant. But my number one favourite is certainly Ha! Ha! Ha! produced by Fleischer Studios. For evident reasons, when I saw it for the very first time, I was really impressed. I am pretty convinced that if the film had not been directed in 1934; I would be convinced that I was the main inspiration source for that cemetery sequence.

If you were a book? And what about the last one you read?

François: I believe that the book Perceptions by Chloé Delaume symbolizes our personality on a proper way. I am inclined to read the same books. At the moment, I am reading Gabrielle Wittkop's book Le Nécrophile which for me is a true wonder.
Ophelie: I am reading Thérèse de Lisieux's autobiography and manuscripts. It's so mystical and at the same time so settled in the day-to-day life, it really surprised me.

Do you think it is possible for you that something similar to Jeremy Irons in “Kafka” happened to you? A gigantic colour beam overcomes your work and your vision after an upsetting discovery?

François: For me, black and white is not only an aesthetic decision. It is literally the way I perceive things. When I am worried and anxious, I am sensible to bright colours. On the contrary, when I am happy and peaceful, my entire world changes to black and white. Ugliness strikes me coloured and almost glowing, while beauty is always shaped with shades of grey. It has been like that since the beginning. Nowadays, as I only draw what I love, I only draw in black. Naturally, Ophelie does not experience it in the way I do, but after all this time, she has come to share this vision of the world too. She just instils certain moderation.

In your last collection you deal with timelessness with verve by mixing patterns, typography, cuttings and functionality. Which is your favourite item of clothing?

Ophelie: In our own process, clothes from an specific collection are like a chapter in a book: It is very complex to extract and isolate them by underlining a particular meaning. I love them all the same! My favourite ones change according to my mood.

Your label never leaves people facing the picture of devastation as we could imagine it. What could a blasted/Dévastée woman evoke to us? Do you have in mind a muse when designing?

Ophelie: With Dévastée, and by choosing this adjective as our name, the concern in our process was to give it a new definition. If I have to refer to “this is what I am thinking about when I evoke a blasted woman.” I could say she is a very beautiful woman, close to her childhood. But it is important to insist upon the fact that we do not want any “public muse” and we do not expect celebrities to wear our creations. We don’t want to personify our ideas. As the drawings are quite figurative already, I guess that we need to preserve a certain abstraction in our work.

Finally, I know it is quite a typical question but… What mythical couple would you choose to be?

François & Ophelie: So sorry, but it is impossible for us to answer... We have never thought about that! 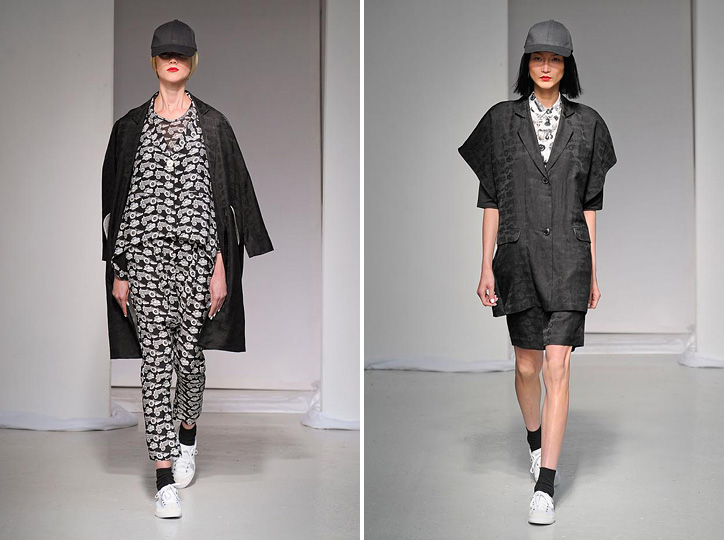 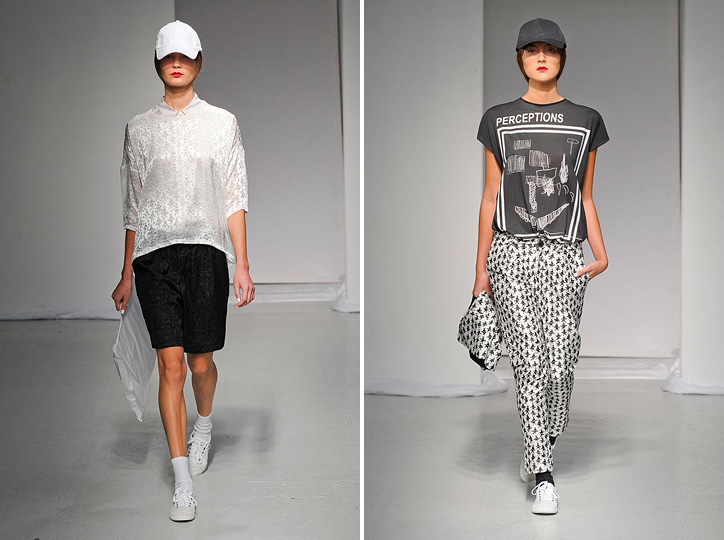 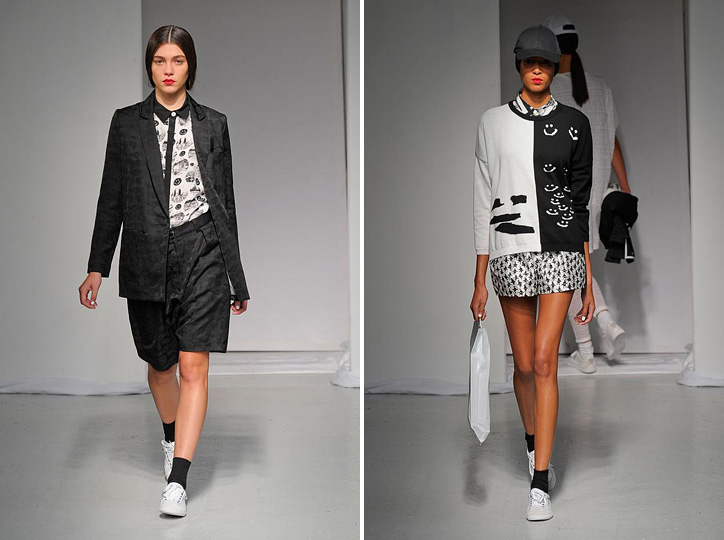 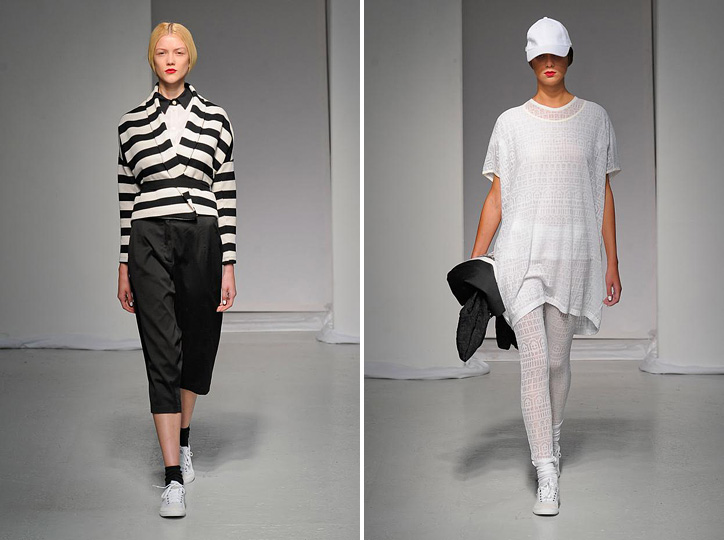 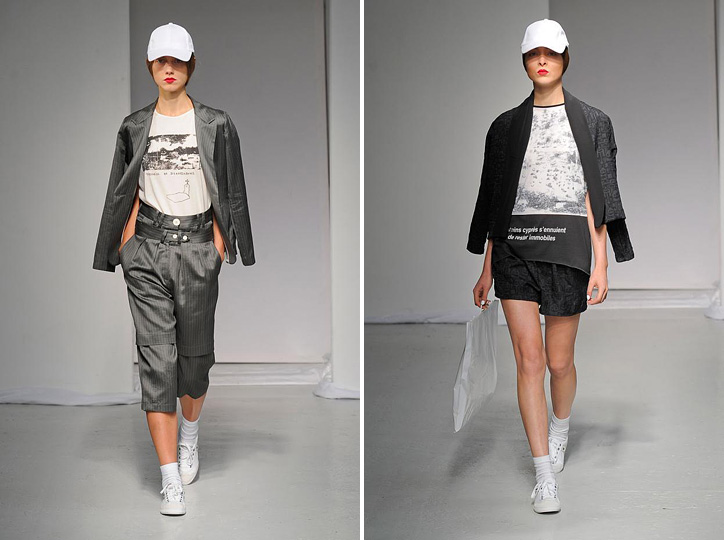 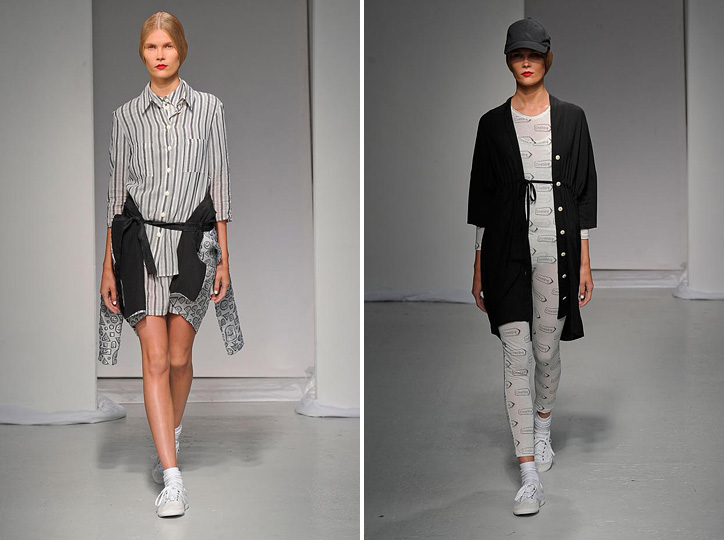 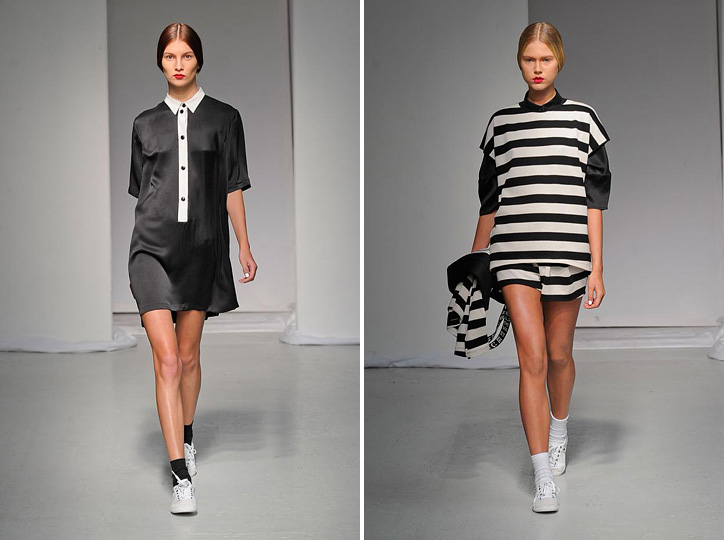 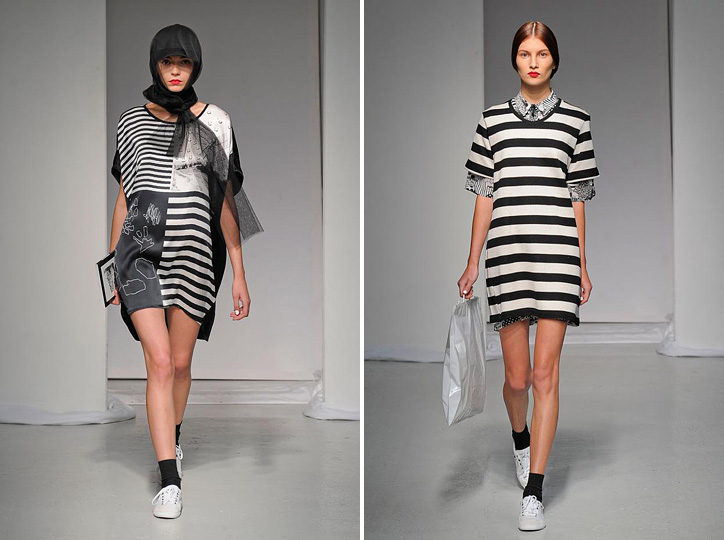 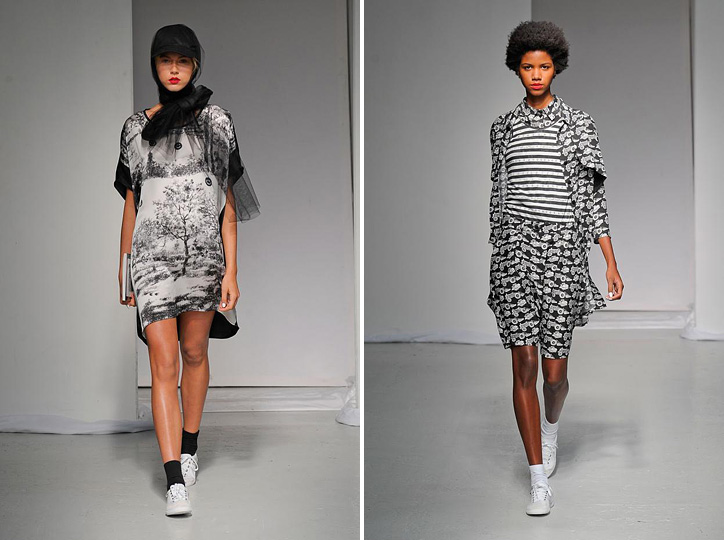 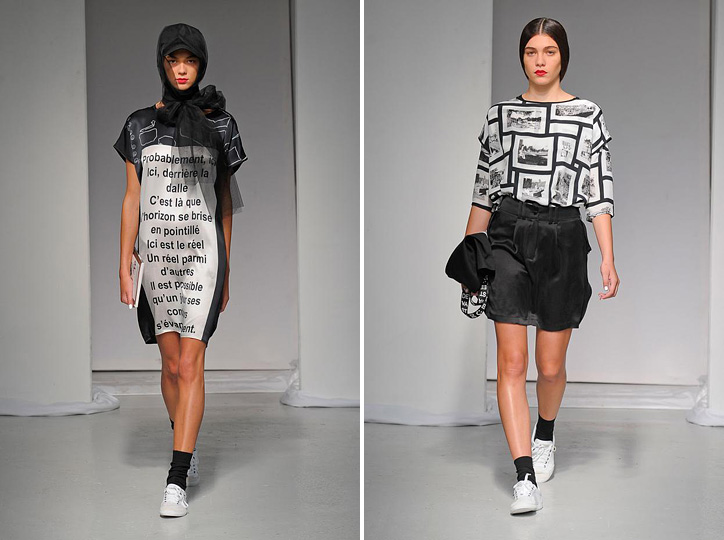