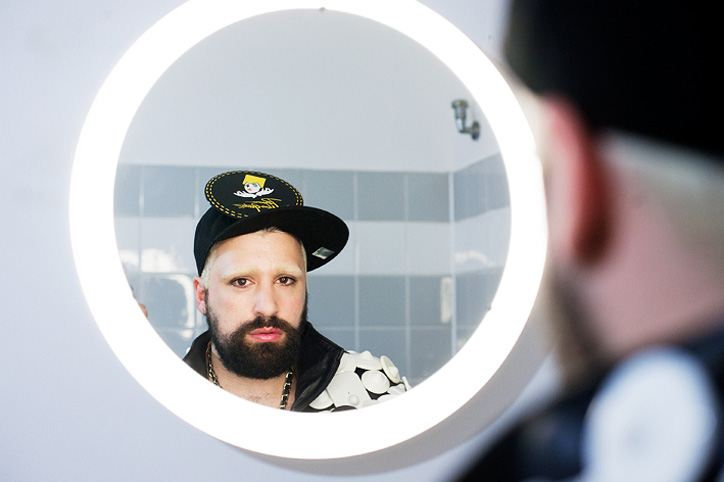 Brussels-born/Berlin-based hairdresser eyewear – and clothing designer, Daido “Persona Non Grata” is not only Lady Gaga’s party pal, but first and foremost he produces work that is a fine, flamboyant expression of his mathematical mind. Plastic and metal are the two elements the artistic engineer likes to fool around with the most, transforming them to manufacture extravagant, futuristic creations. We sat down to chat about the ubiquity of geometrics, and how his vision of a perfect bob cut has everything to do with 3D.

Hey Daido. Can you tell me a little bit about your background? Where did you grow up? Are you a self-made-persona?

I come from Brussels. After I graduated from high-school, I got accepted to an engineering school (yeah, I was a little prodigy back then…). However, as much as I am fascinated with mathematics, I didn’t want to make a career out of it. But I must say, the stereotypes of geeky engineers who wear glasses, have braces and are obsessed with kinky porn are rather accurate. Instead, I decided to go to art school in Brussels instead, where I met my closest friends, all of whom were hairdressers. At the time, styling and trimming hair seemed like a pretty dumb job to me but it turns out my friends had a vision of hairdressing that was completely revolutionary: a blend of architecture, chemistry and maths, mixed with a great sense of style. It was eye-opening.

“Persona Non Grata” – it literally means “unwelcome individual.” Why did you chose this pseudonym and in what way does it relate to your creative process?

After I finished my studies in 2007, I decided to move to Berlin, where I started working as a hairdresser to finance my projects and to pay for my gear. That’s when I created “Persona Non Grata.” The genesis of it goes back to the party-scene in Brussels. My friends and I were pretty outrageous partiers and I suppose both our look and behaviour were a little too extreme for that city. As much as people enjoyed hanging out with us, we still felt pretty unwelcome because we were so… unpredictable. Yeah, that’s a good word. Brussels being such a small place, most of the people we knew created a distorted image of who we actually were. It’s like, we would get invited to all the parties but were always too disruptive. So, the name seemed like a great concept to attach to myself and I perceive it as the true essence of what any artist should be – a creator of something that pulls people out of their comfort zone. Not necessarily ultra-gross and shocking, but in a funny, witty way. I might have another answer for you if you were to ask me the same question tomorrow though. I am a very self-contradictory person.

Whether it be in your hair styling, or your headpieces and clothes designs, I noticed they all share a recurring and poignant use of geometrics. Is this a conscious staple of your work?

Geometry is my whole life. Most perfect shapes don’t exist naturally-they are man-made. I love the aggressiveness of certain basic shapes, because they are more powerful. For instance, when you notice a perfect bob cut, it strikes you as very sharp and high-maintenance, which isn’t necessarily to everyone’s taste; yet it somehow always manages to leave an impression. I like very balanced shapes that have geometrical properties. When you’re doing a haircut, you are basically translating 2-Dimensional panels, thereby creating a 3-D shape. Geometrical haircuts are considered the foundation of hairdressing, they are not only the most classic haircuts but also the most technically-challenging, so once you master them, you can do anything. Nowadays, hard shapes are considered more retro. As an 80s kid, I feel the world’s image has been remodelled to look softer, less edgy, a bit more boring. Everything looks similar, yet toned down, washed out, with softer edges, so as not to hurt anyone. I often read about so-called “avant-garde” designers, but to me, they have absolutely nothing “avant-garde” about them. Using minimalism and black isn’t enough to be avant-garde, or at least, I hope that isn’t what the future will be made of.

What materials do you feel most comfortable working with? I came across your recent creation “Fox Headphones,” a headpiece for which you used two dead foxes. Is there no material you would rule out? What does this mean in regard to your creative process?

I am a creative person, with a mathematical mind, which is as much of a good thing as a bad one. The one question I always ask myself is: is it technical enough to allow it to be ugly or is it beautiful enough to be useless? Sometimes, technicalities can restrict creativity, and at other times aesthetics can limit a project by rendering it more superficial. I am obsessed with eyewear, helmets and masks, and these past few years I have been experimenting and creating glasses made from plastic and metal. I bumped into Lady Gaga at Berghain sometime in 2011 and she told me she loved what I was wearing, which led me to making her a plastic and metal helmet but I actually made a lot more stuff for POSH, her main dancer- mostly wigs. I can’t really say that I have any kind of favourite material to be honest. I like to experiment. As for the fox headphones, I just found the foxes at a flea market and thought it would be interesting to use them and transform them into an everyday object, that still showcases the features of the animal, because I think we tend to forget what things are really made of, thanks to embellishment or packaging. There have been some very strong reactions to that piece. I fully support animal rights but at the moment, it’s not a battle I’m fighting.

Going back to the literal meaning of Persona Non Grata, what would you say to someone who told you they think your work is “too provocative”?

I don’t really like to explain or defend myself. I express myself and I definitely cannot please everyone. People who think I am too provocative just haven’t asked themselves the right questions. I think most of my work is very humorous and definitely shouldn’t be overanalyzed. I like to mock our world because everything about it is so contradictory and controversial. I love working around sensitive subjects such as kleptomania, death or sex… and anyway, by the time I’ve released something, I’ve already started working on something new. Don’t get stuck – just move on! That’s my daily mantra!

The way you see it, could your creations work in everyday, regular, urban life?

I would love to see people wear them in everyday life, but I don’t think it’s realistic because most of my pieces aren’t very practical and probably a little too extreme. However, my glasses are very successful online, particularly within the eyewear communities and are more like collector’s pieces. I collaborate closely with a blog called “Sunglasses Preservation – A collection of exceptional glasses,” which features both recent and retro designs, and they archive every single one of my creations.

Let’s discuss the “mise en scene” aspect of your work: your photoshoots, for example, have a very cinematographic, orchestrated feel to them. Do you share the idea that your creations are made to accompany a certain décor?

I love drama, because of the Italian blood running through my veins I guess, and I love to transform people into something they are not, like some sort of mutation. Costumes, make-up and hairdressing change one’s behaviour, allowing a new persona to kick in. Some human beings are perceived more out-of-this-world, even if they are just an everyman. Take celebrities, there is something quite robotic about them because we only witness the perfect fragments of their lives. In my photographic work, the same thing takes place, I love to stress the robotic side of a person, to make them more sublime, more static, timeless, slightly dead and surreal, almost like a painting; altering their proportions and turning them into something more geometrical! 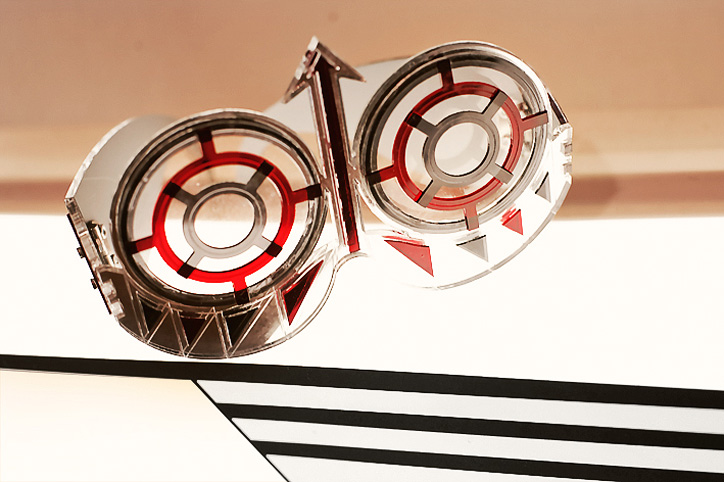 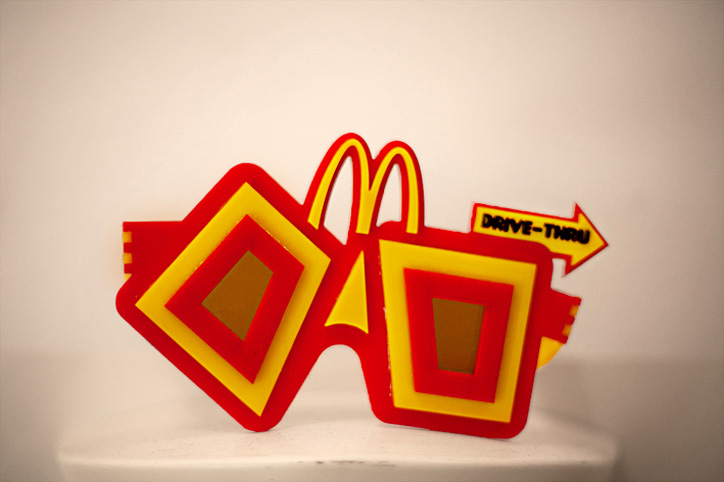 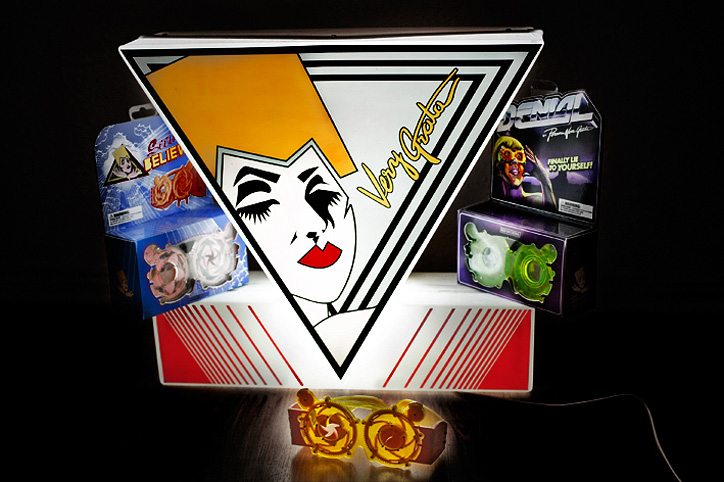 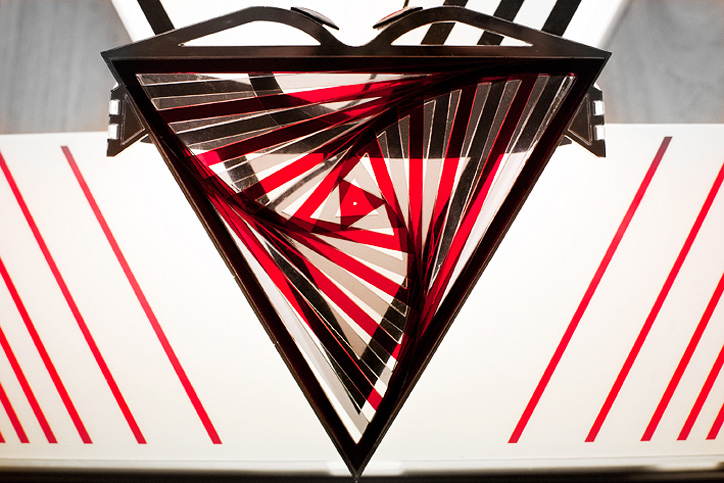 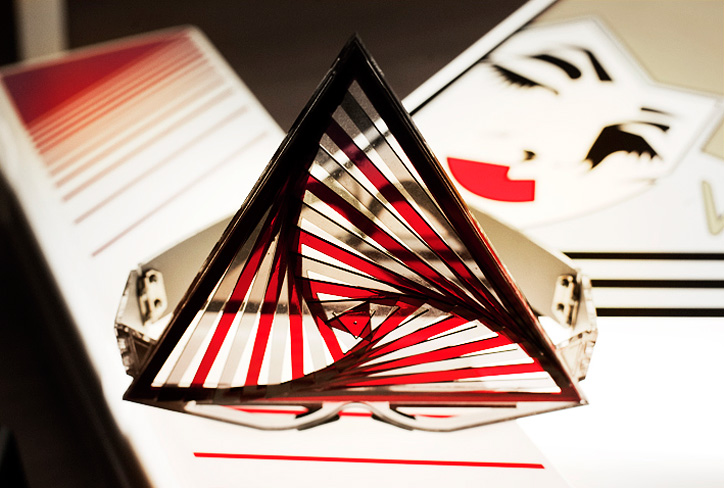 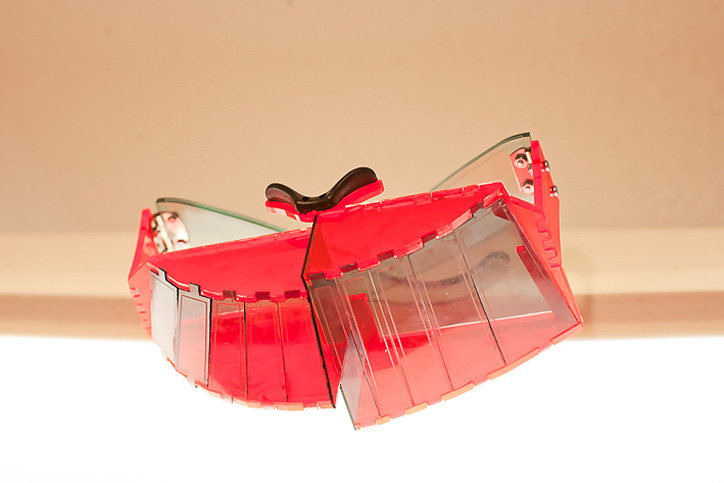