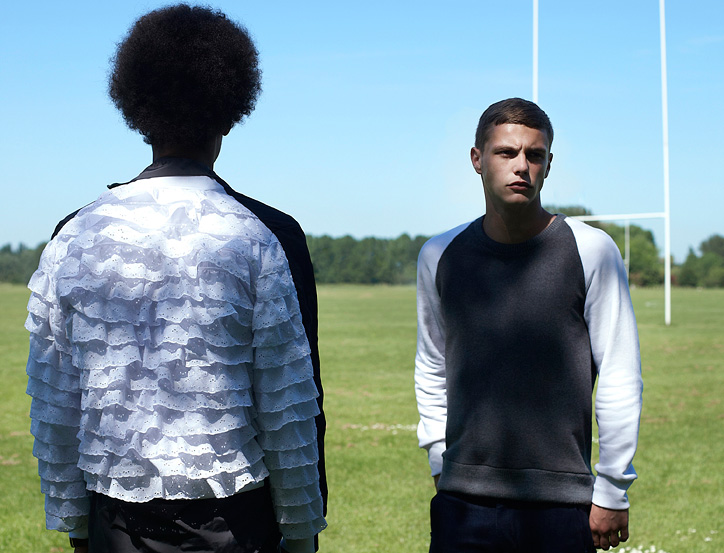 Metal Magazine talks with Christopher Shannon about his Autunm/Winter 2012 collection and its influences such as Sidnead O'Connor, the fussion line Kidda and the current designer's direction. Don't miss Metal's exclusive video shot by Saty and Pratha and styled by our Men's Fashion Editor, Santi Rodriguez.

Christopher Shannon is one of the most prominent men fashion designers in the London fashion esphere, each of his collections are the result of a boldness mind that designs for the men of our time, casualwear garments yet modern tailorying.

The designer is a graduated of MA Menswear in Central Saint Martins he broke up the scene with his autunm/winter collection in 2008, the recognition that he deserves has been growing step by step, first winning the NEWGEN for his spring/summer collection in 2009 and then sponsorship the winter one in 2010 and recently he is one of the winners of NEWGEN spring/summer 2013. You can read the full Spring/Summer 2013 report here.

For the autunm/winter 2012-13 Christopher Shannon was heavily influenced by the music of Sinead O'Connor and Mathiew Kassovitz's 1995 fim, La Haine, about the youth's social problems a subject that currently still as big concern. It is in the intelligence og his design where Shannon puts together two different concepts in this collection as he challenges new technologies as the Tech-Chino jeans, or the mixture of fabrics as leather and wool. You can not miss out the multi pocket trousers, the panelled outwear in parkas and bombers or the brand's signature print, Pasley in jumpers and trousers.

However Christopher also focuses his energies in other projects as the new fussion line, Kidda, basic wardrobe garments composed of t-shirst, jumpers and trousers in the iconic pasley print. Or an accessories line collaboration with famous brand Eastpak.

The autunm/winter collection has two main references as Mathiew Kassovitz's film, LA Haine, and the controversial singer Sinead O'Connor. How did you put these two influences together?

I suppose they are both controversial, I was asked to interview a hero for a magazine and I chose Sinead, prior to the interview I was listening to all her old albums I listened to a lot as a kid and a teenager, they really put me back in a place, I was amazed how well they have aged, the same is true of La Haine, Im fasinated by the qulaity of peoples work and why some thing dates better than others. I think there is a cleaness to the work and soemthign so great about the production. Also I like things based in reality, they tend to make people feel uncomfortable, I see little point in work that is really difficult to relate to.

The story behind the film La Haine has many similarities with the sad episodies happened in London the last summer. A youth with no hope. How do the social problems affect in your design process?

The riots were really foul in London I hated every second of it. I am from Liverpool were there were riots when I was a baby, I dont remember them but I do remember the shadow they cast, one of my fathers businesses was looted and burnt, and many really amazing building destroyed, I understand were the anger came from in the Liverpool riots and how it just justified. London riots felt messageless and wasteful. The north has always had high unemployment and its effects, the London riots were more about brats who feel entitled. That doesnt inspire me at all.

For the Autumn/Winter 2012 collection, it seems you pick up few key elemts from last collections as pasley print.. why is this print so significant in your clothes?

It actually wasnt a paisley but a embroiderie angliase print, I like to bring in sort of gross elements to the collection to stop it being one note. And the challenge of working with something you know to be poor taste is always interesting, I never wanted a label that was about just lovely things or heritage ideas. I like work that is personal. I also like re visiting ideas, I loathe it when desginers change their work completely every season I think theres something really fake about it.

Also pasley prints have a big prominence in your diffusion line, Kidda...

Yes, kidda first season was about using prints that we had never really made available before. Also for aw we reworked a lot and for ss 13 all the prints are new, its such a simple line that we have to be brave with what we do with the graphic elements of it.

In what aspects Christopher Shannon mainline and Kidda coincide?

That I design them both, they are both accessible in a way but not straightforward. I think my work is quite optismistic and open to interpretation. Also we work with staples and classic shapes, Im not one for a novelty drape.

One piece of the Autumn/Winter 2012 collection that it has been very comented is the bomber jacket with lace back panels. Where did you get the idea from? I guess no from Sidnead? (Laughs)

It is quite Sinead actually, tough upfront then feminine and funny at the back. It was just an idea, I wanted to do loads of bomber jackets and when they all got too serious I wanted one that was a bit off putting. You have to put some ugly ideas out there otherwise nothing moves forward, its the only way to develop new visuals. We all know what nice tailoring looks like.

There is a progression, a maturity in the Autumn/Winter 2012 Collection in comparision with your old collections. Are you going into a new direction?

I'm not sure if there is a maturity, it was quite clean an commercial and yes its sold really well, but I have to keep the work interesting for myself, I dont want to compete with all the endless labels all directing themselves at the same customer. So now weve been commercial for a season I think ss will be less so, but commercial really means what sells and the pieces that do well for us are usually the odder ones so they end up being commerical really. I think if you want a white shirt or a navy knit theres enough places to go, I dont want that to be my job.

What about tailoring? Have you thought of the idea of leaving apart sportwear?

I dont think what I do is sportwear, you wouldnt go the gym in it would you? Its more casual/street wear. I ve toyed with the tailoring idea a few times, I think Calvin Klein do the best modern taloring and until I really have a point of view on it then I see little point, also who wears tailoring?? People in the city, but they arent going to be working a neoprene blazer are they?

How important are the accessories in the brand?

Depends on the colelction. I really really want to do more but finding the right makers to work with is really difficult.

Can you tell us about your collaboration with Eastpack?

I worked with Eastpak for almost 3 years, it was great, but like all things we had to end it at somepoint and move on. It seems like a really long time ago now although I think maybe there is one collection to still drop. I see people wearing the bags all the time in London, always makes me smile.

You were one of the winners for the Newgen Men SS11. The award is an enormous recognition for a young designer. I always wondered how importance is for a fashion designer to win the award and if it marks the end and the beginning of a era in the brand?

It just part of the process, Im not sure how vital it is, I only know how its helped me. I think there are different ways to establish a brand and sponsor ship isnt always the best way for some people, nor do I think it represents the most interesting work in London. If I hadnt gone this route I think I would have either taken one of the jobs that was offered or done a much smaller collection focussing on a few items. Every season is a uphill slog, at some point we will have to be completely self sufficient and I think we can make that crossover, so in regards to my company we were a good choice for sponsorship. I dont really like spoon feeding and you learn business as you go really I dont think it can be taught in a straightforward way. Keeping the balance between the ideas and the commerce is tricky but for me the ideas wil always come first. 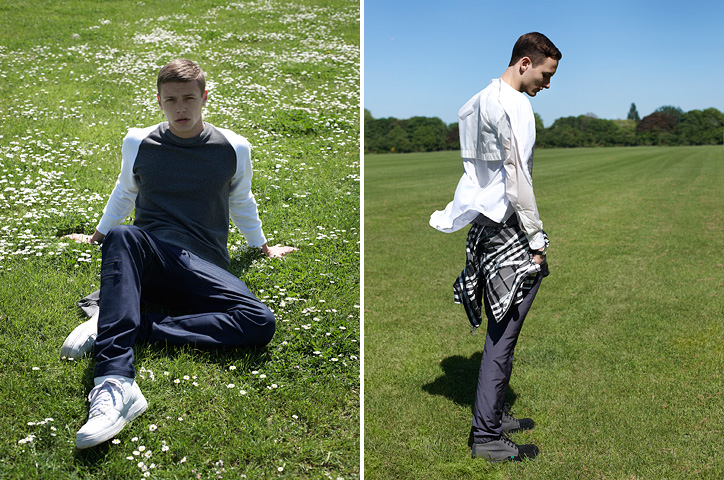 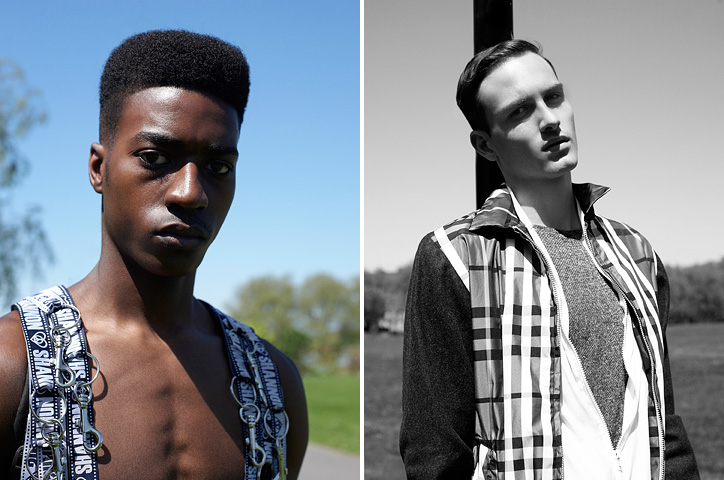 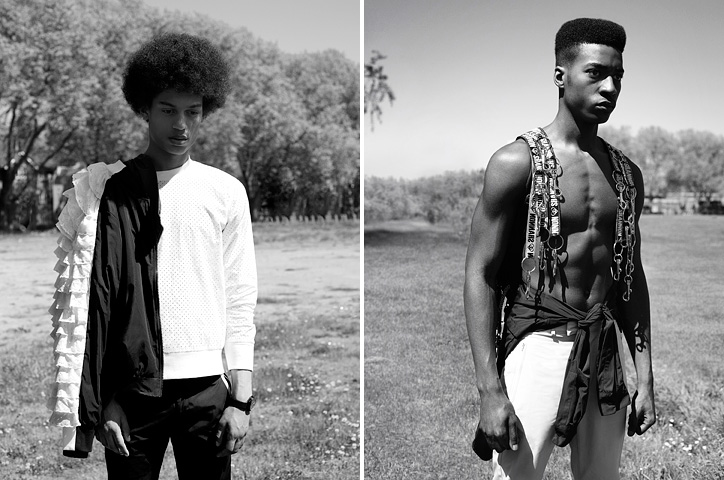