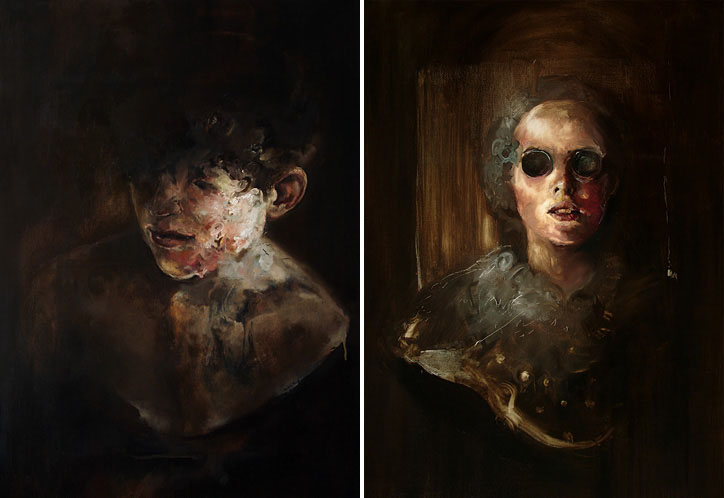 The Romanian artist Andrei Varga focuses his work in creating exquisite portraits of exuberance. Luxurious, grotesque, strange and disturbing, his portraits are a reflection of a broken memory. Based in Dublin, Andrei works concentrated on portraits of his latest series "Unsaved Memory".

“It is about time and the way it leaves prints in our memory and also about the way that human memory plays with time. The memory decomposes the complete image transforming it into an incomplete puzzle and then it plays with it into the imaginary field trying to recompose the image”, Andrei says about “Unsaved Memory”. “It is about transposing the material into immaterial by creating a new identity and vice versa. I am fascinated by space and memory, either physical or imaginary, and by their virtual existence.”

People of your painting seem to be fascinated or not present. Who are they?

Yes, they are both fascinated and present, although they are memory fragments; because the memory is present it makes these portraits which are part of it to be there too. Some portraits belong to my own memory but the others become a memory in the moment of creation, allowing the creation to transform them by converting them through its form.

You are originally from Romania and you completed your MA there, how do you think growing up and studying there has influenced your style?

It had an impact on me and had influenced my artistic style but it also helped me develop it. I think that the place where you are born and where you start learning leaves a deep imprint in your being but at the same time you need to develop yourself cherishing the mark of the place but you need also to start to develop in order to express yourself on a large scale.

Then you decide to move to Dublin, why did you choose this place to live?

To make a long story short I could say that an artist needs to travel, to absorb the culture of other nations - and Dublin / Ireland is one of my stop in this artistic pilgrimage.

Where do you get your inspiration from?

When I walk on the big corridors of the museums I often stop at artworks on large canvas and dark atmosphere, completely fascinated with the atmosphere and with the light-shadow game, and with the way the light enters in the dark shadows, by toning them. I feel inspired by the classics, and the atmosphere they create but at the same time I believe that I am closest to Francis Bacon's creations because of the power of the touch and this is likely why my first stop in the artistic pilgrimage was Dublin.

How is your creative process? Which is your starting point to create one of your portraits/paintings?

The process began with the idea. I used the idea of ​​a very common subject in art –the portrait. During the creation I started to play with the construction of a classic portrait style and to deconstruct it in the same context, in order to destroy it and to eventually transform it due to the contemporary interventions, this was the core idea to transform the old into new and here started a series of ideas and experiments.

The characters of this series seem disfigured, grotesque. Their faces are not clear, they have been erased with paint or have been ripped…

Deconstruction involves removal, tearing apart; disfigurement of figurative; only by removing parts of the figurative we can create a new one. At the same time this contortion represents our own memory and how this plays with events of deconstruction and construction of our lives and of faces or beings encountered, physical prints and images of which slowly dissolve, leaving only small portions of them.

You use a dark color palette in those paintings; do you think that it helps you to create this particular atmosphere?

The dark palette helps me get into those parts of memory and even in the subconscious, creating that mysterious even mystical atmosphere.

Have you ever done a self-portrait?

Which other characters or things do you think you would like to paint?

At the moment, I feel I should stick to the portraits and I think I still have to develop this concept, and I want to further expand it by using a new series on the same construction-deconstruction concept, but approaching another topic. I would not want to reveal any of my works yet, I prefer the images talk on my behalf.

A white room, where you can hear inspiring music, creative atmosphere and a strong smell of oil ...

Do you accept commissions? 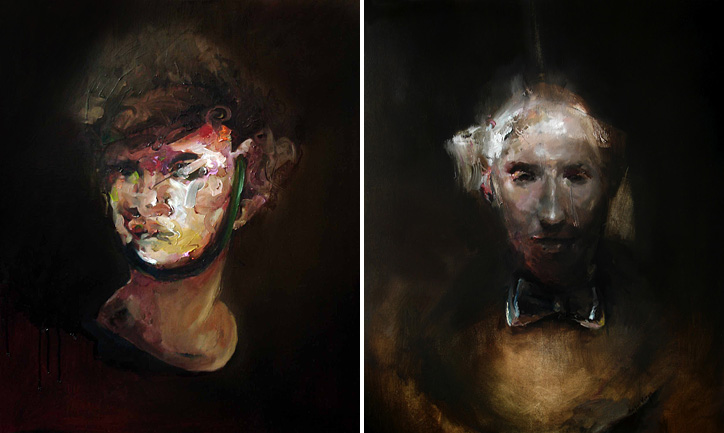 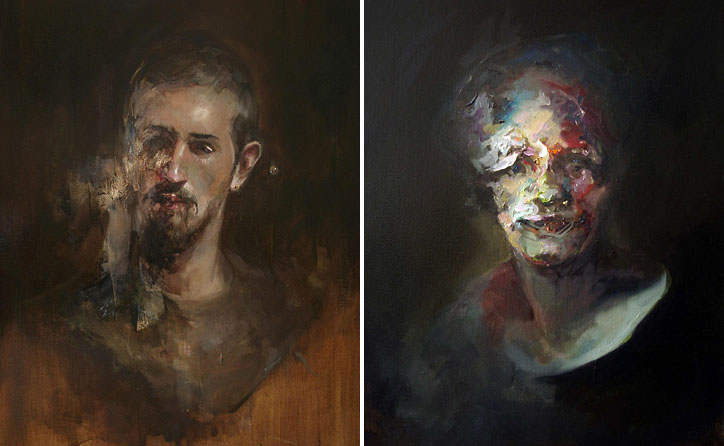