Drawing Inside The Lines 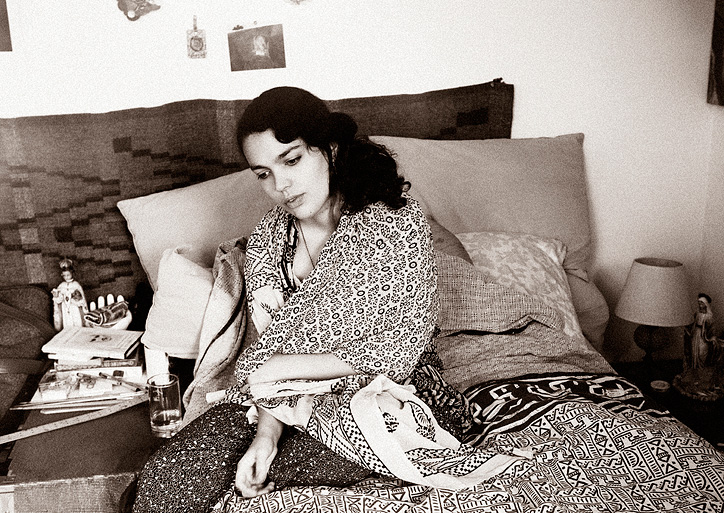 Alana Dee Haynes wants to change the way you think. Troubling the line between photography and illustration, the Brooklyn-based artist engraves intricate designs on images from fashion glossies. She adorns her subjects in baroque doodles – some mimicking veins and musculature, while others tattoo the body like a second skin. The result is sensual, whimsical, and raw – her inky etchings leave traces of human touch on the manufactured image. But this is less an act of anti-fashion graffiti than an exposure of what lies beneath the surface. Haynes speaks to us about fashion versus art, symbolic inscription, and her dreams of a lifetime of doodling.

What’s your relationship to fashion versus art?

I guess I’ve developed fine art approach to fashion. I studied art in high school and fashion photography at FIT (the Fashion Institute of Technology). A lot of my teachers at FIT wanted me to do very commercial, cheesy photography. But that wasn’t edgy enough for me. Any time I tried to incorporate my illustrations to make my photographs more interesting, I got negative feedback. I just wanted to make what I wanted to make, and I’ve known what I wanted to make for forever. It was only after I graduated from FIT that I got more into fashion – by literally drawing clothing on to people.

Why do you draw on other people’s photographs rather than your own?

I was doing my own photography for a while, and I’ve had years of training and classes. But I was just tired. It became very contrived to think of the photograph I wanted to take and at the same time come up with the illustrations. It wasn’t a natural process for me anymore; I was thinking too much; it became overdone. When I graduated, I just started doodling in magazines for fun, and people really liked my work. I felt like I could control it more, and it was easier to throw myself on to a found image than my own photography.

It’s just different. Drawing is like, ‘me, myself, and I.’ I’m usually alone and can listen to music and not have to talk to anybody. Whereas with photography, I’m usually around other people, there are tons of lights in my face, there’s talking and craziness, so that’s more of an adrenaline rush and it’s just not as relaxing. But with drawing, I can work through my own thoughts and not have to worry what anyone else thinks.

What is your artistic process, starting with the found image?

My art is very immediate. I’m drawn to images where the models aren’t necessarily wearing clothing or advertising a specific thing. If I’m looking through a magazine, something will pop out at me, and I’ll rip it out, put it on my lap and start drawing. I always use pen – it’s that immediate need to just draw and not spend too much time erasing or over-thinking. Then, I’ll sit with the piece for a few hours, look at it for a while to make sure it’s something I approve of, and then scan it and make the ink a little darker or lighter. I’ve worked on pieces from twenty minutes to entire days, depending on what mood I’m in, how focused I am, and how much detail goes into it. With the ones that are really dot-oriented, I have to go around each curve and make exaggerated definitions of the body. Those take a while because I’m looking at each shade of color, where the shadows are, and trying to dissect the human body, almost like pointillism.

How do you come up with the concepts for your illustrations?

Starting out, I often don’t know exactly what the story is that I’m trying to tell; a lot of it is subconscious and it’s only later, after I draw on it, that I can see where I was going with my thoughts. I think a lot of people try to think about their concepts first, but with my illustrations, it’s very calming for me to just do it quickly.

Do you think certain qualities in the image shift after you draw on it?

I think my illustrations add an imaginary, fairy-tale-like story to the image. Black pen makes the image darker, so there’s often a quality of veiled mystery. I think a lot of my art incorporates those concepts of mystery, darkness, and the unseen – the tension between what you can see and what you can’t see.

What do you call yourself – a doodler, an illustrator, a mixed-media artist?

I like to just say I’m an artist, because I try to dabble in a bunch of different things. I also make sculptures, murals, and paintings. For my mixed-media illustrations, I call it ‘reappropriation’ – which is funny, because spell check doesn’t even recognize it as a word yet!

How do you understand 'reappropriation’?

When I find an image, it’s just fair trade; I’m creating something new. But I also see 'reappropriation' in symbols and religious figures, like the Virgin Mary. A single object contains so much meaning in it; it gets used in so many different contexts and grows with the world.

How do you use symbols in your work?

A lot of my work, specifically the pieces that aren’t super pattern-based, use facial features. I love eyes, mouths, and ears; I love interesting noses and strange features in people. In my room, there are a ton of images of hands everywhere. My pattern drawings are more representative of symbols in nature, like waves and rain.

I think it familiarizes it. With my image of the mouth, I added more mouths to make it less sexual. The mouth can be such a luxurious, sensual part of the human body, but when you add more grotesque images on top of it – like when you draw a foot on a mouth – it asks the viewer to make different mental connections. It’s still a pretty sexy mouth, but when you look deeper into it, it changes the way you think.

You’ve gotten a considerable amount of press in a short period of time! How did that start and how does it feel?

I don’t know how it started actually. One day I was just making art and the next day I was getting emails from middle-schoolers saying they’re writing papers about me. I only started putting my work out there about a year ago, and people really responded to it at a rapid pace.

What’s the most interesting or inspiring feedback you’ve received?

I had a meeting with the modeling agency IMG. It was really incredible to see these amazing people take an interest in my work. I couldn’t believe I was even in the same room with them! Just watching their faces really motivated me. They offered me guidance on how to move forward, and hopefully we’ll work together one day.

What are you working on now?

I’m starting to do more collaborations with other photographers and magazines, and I’ve been getting assignments to do more editorials. Recently, U+MAG in Brazil sent me over some amazing black and white images to illustrate.

What does the future hold?

One day, I would like to have a fashion line. I’m currently designing some coats and shirts, and I have one bra idea that I’d really love to make. It’d be nice to have the funds to start designing, and to print my work on the fabric. The designs would flow in the same way that my illustrations do, perfectly around the curves of the body, embodying my drawings. Ideally though, I’d like to make a living from illustrating editorials and from collaborations, not a ton of money – but just enough. 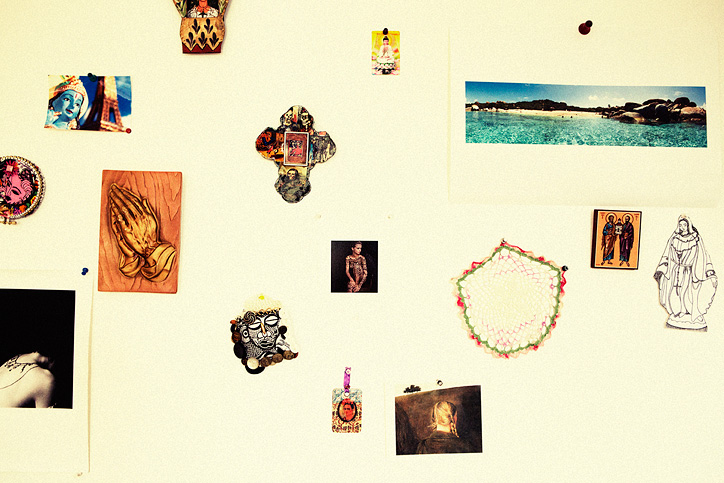 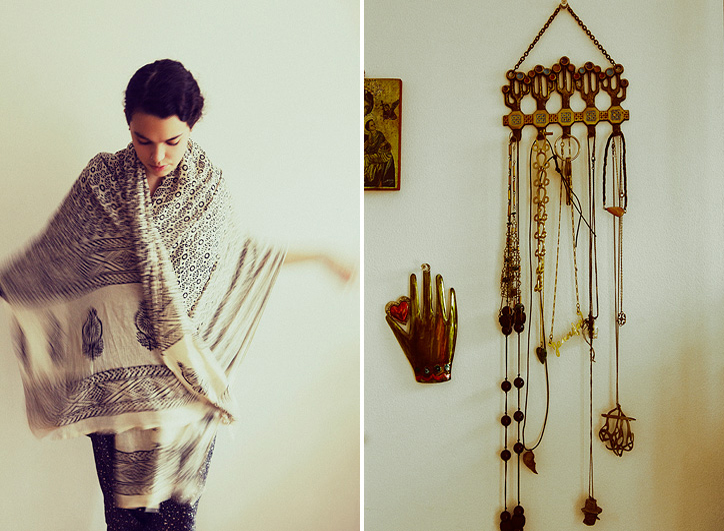 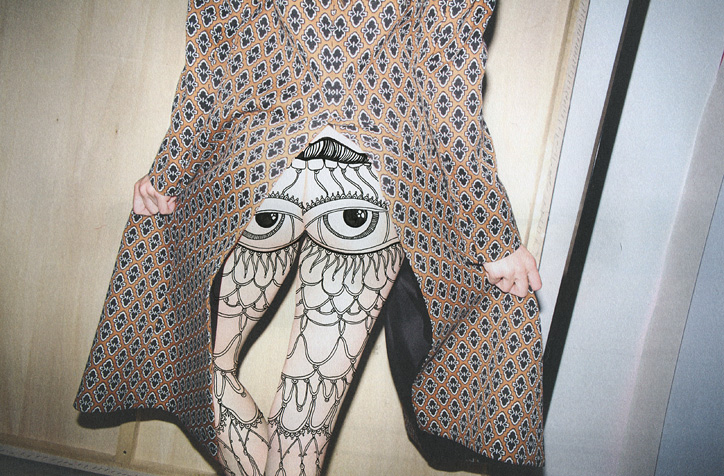 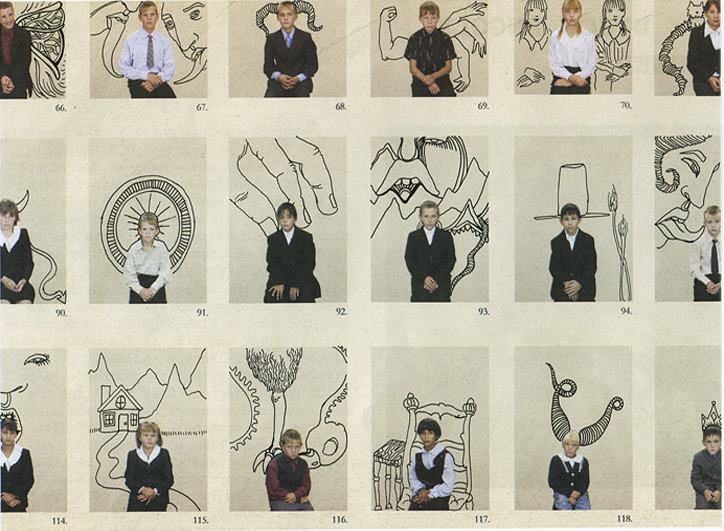 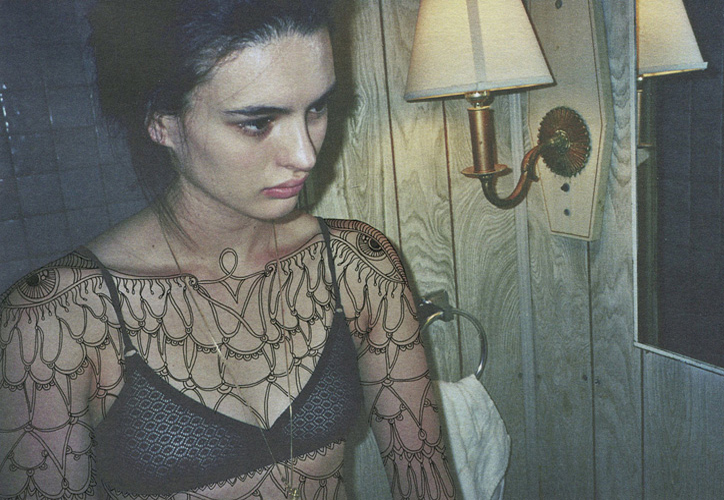 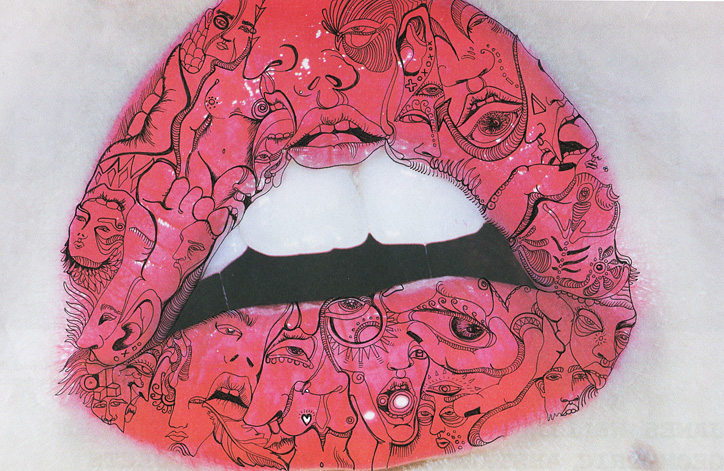 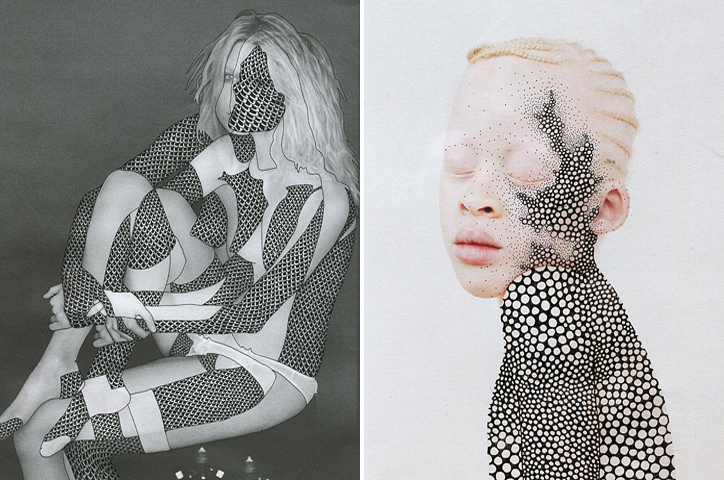 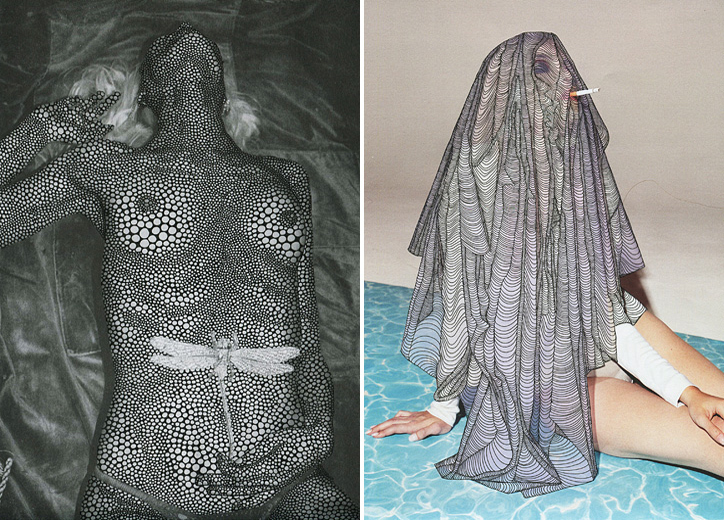 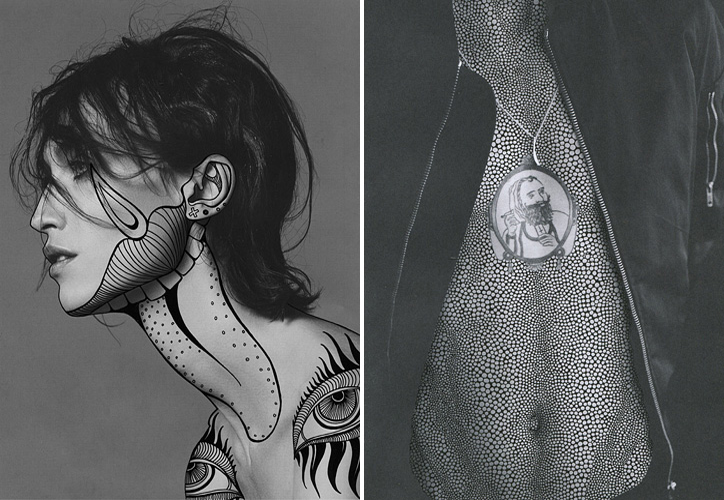 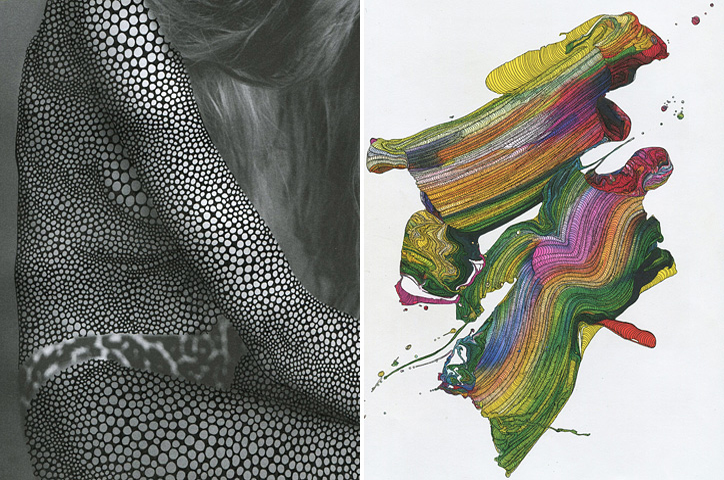 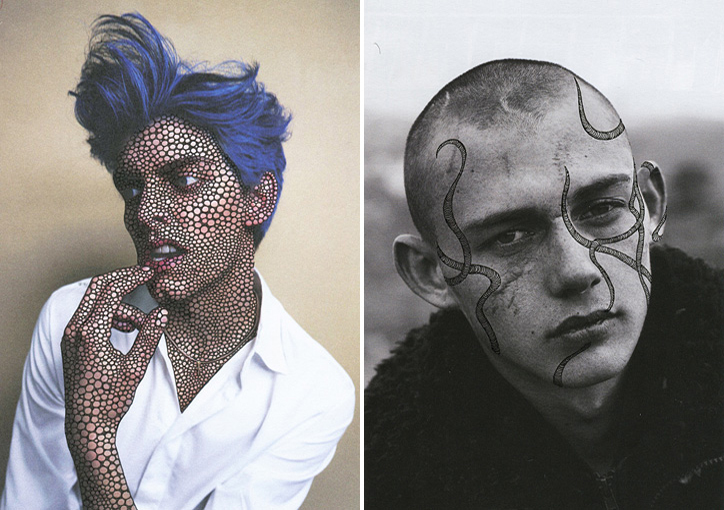 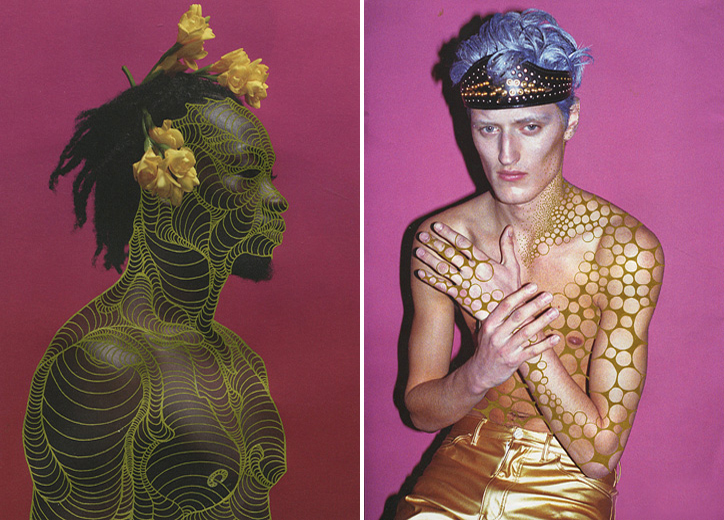 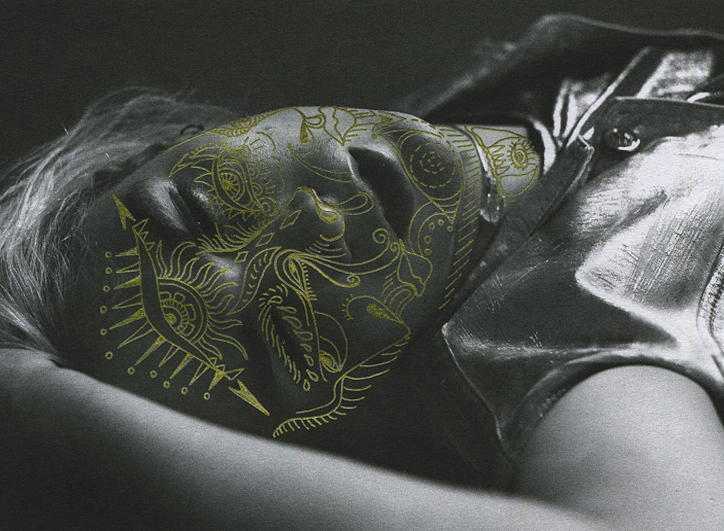