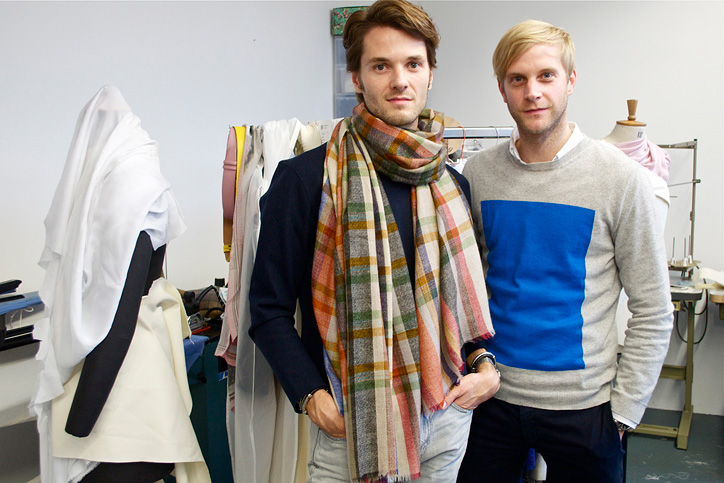 Oliver Lühr and Thomas Bentz of Berlin-based womenswear label Achtland, approach fashion design in a unique and inquisitive way. Beginning with obscure yet fascinating conceptual and aesthetic reference points, their inspiring collections gradually take form through research and playful experimentation with a broad range of hues, fabrics, silhouettes and techniques. Indeed, it is in the space between supposedly opposing ideas that the genius of Achtland reveals itself, with a tension produced by contradiction structuring the logic behind the team’s strong and coherent designs.

Beyond up-and-coming, Achtland has steadily garnered high praise (the duo received the coveted BUNTE New Faces Award 2013, and have been chosen to take part in VOGUE Germany’s ‘Vogue Salon’) and their Spring/Summer 2014 collection ‘Prinzhorn’s Finch’s’, shown earlier this year at Berlin Fashion Week, epitomized their deliberate manifold aesthetic. By placing soft delicate fabrics such as lace, silk and organdy, amongst nonchalant oversized denim and jersey pieces, the traditional notions associated with such materials became dramatically reconfigured in an aesthetically captivating way. Informed by the historical artwork of mentally ill people on the one hand, and the bright hues of show birds on the other; their careful attention to detail and timeless intuition nonetheless ensured that the collection remained cohesive and expertly executed. Representing a new breed of designers who take their devotees intelligence as seriously as they take their design practice, Lühr and Bentz’s Achtland symbolizes all that is promising about Berlin’s growing pool of independent labels. The charming, sincere pair sat down in conversation with METAL to talk about the label’s past, future, and everything in-between.

I’d like to start with the name of the label. Taken from Irish mythology, Queen Achtland was so unimpressed by the shortcomings of mortal men that she married an immortal and crossed over. Your website says that her determination and strength lies at the heart and DNA of your label. But in the story there is also this element of contradiction between the mortal and immortal world. How did you come up with the name?

Thomas: What first struck us about the name Achtland was its phonetics. Achtland is a very German sounding name, but then again it’s not German at all. It doesn’t immediately reveal whether it signifies a person or a location and we sort of liked that; that there is a kind of story behind it that makes you think it’s German, and that, in truth, it is a female person. Initially, we didn’t like it, but it stuck with us and we thought it would be an interesting idea to use the name and contrast it with what we do aesthetically which is, hopefully, a bit more refined and a little bit more playful than what the name suggests.
Oliver: I’m really happy you picked up on this two worlds’ aspect. Because yes, there is this idea that she is a Queen, a woman of certain position already, and then she becomes a Goddess. What is interesting about the story is that she’s trespassing between those worlds which at that time were in fact parallel worlds, rather than being Heaven and Earth, it was more Ireland and the surrounding islands. I think that it’s something we always try to aspire to creatively, and that is sort of the essence of creative process; always questioning what is around us until you start reaching new conclusions. Achtland herself is our ambition; for our customer to be like her, or aspire to be her, or to be her already. We are in-between those worlds, exploring those options. And then of course, for the women that wear our designs to be open to new ideas and not be too stuck in their ways. That openness is very important.

How did you both come to start Achtland?

Oliver: I studied at Saint Martins. Tom has a non-fashion background.
Thomas: I did a Master in politics and business, and I came to fashion through Oliver. We always had the idea in the back of our heads to do something together. The moment came in 2011 and the decision was made very intuitively.

I find this idea of opposition and tension in the label very interesting. The label has two designers - is that a productive force behind the designs?

Thomas: It’s interesting because we approach fashion from two different angles, but we work together very symbiotically. We are harmony seekers. We discuss, we fight, but not really about aesthetic choices. It is more about the way we get there, isn’t it?
Oliver: Yes. We challenge ourselves by looking and working with things we initially find ugly. Take lace for example, which is so overburdened. We look at it, and try and turn it around: either paint it, cut it apart or re-embroider it, so that it becomes something we actually like or accept. That’s the challenge. It is not so much in-between us, it is in the exchange with what we look at or what we play with. Fabric in that case is quite essential.

Reference points I imagine are very important too. Your current collection ‘Prinzhorn’s Finchs’ is based on two different reference points, the Prinzhorn Collection of outsider art in Heidelberg, and the colours of show birds.

Oliver: The Prinzhorn Collection exemplifies how we work. We came across this piece in London Timeout where a jacket was shown, and it was only being shown because a book had been written about it. The book was about mental illness and had nothing to do with fashion. And through that one piece we looked into the exhibition, the collection, and we visited the archive as well. At that point, it was just something that interested us, not something we necessarily thought we would want to or had to link with fashion. But then we realized that it interested us aesthetically, and the whole world that comes with it, of outsider art, art by mentally ill people living around the 1900s. It is quite exciting and interesting what happened, particularly if you look at what they did and then what the modernists and expressionists did, which is not very far away from what those people were doing twenty years earlier. It was that notion that we thought would be interesting, to see just how far we could put that into fashion, or keep it in our minds as an inspiration.
Thomas: We take our inspirations as a starting point and then we stray from them and try not to take them too literally. Sometimes we actually forget about them, and then, at some point we look back and think, ‘Oh this is where that came from!’ (laughs).

Some of the contradictions or tensions at play in the collection include hard and soft, feminine and masculine, finished and unfinished; the jacket without a zipper for example.

Thomas: The jacket being left unfinished was a very direct reference to a piece in the Prinzhorn collection, where an artist had used a huge length of torn linen…
Oliver: They were her bed sheets originally.
Thomas: Yes, and she had made these large scale installations within the confines of her cell. We always try to work with a simplified silhouette and then attach things such as fabrics or ideas that come to mind.
Oliver: I want to break down the soft and hard themes a little more. For us, there is always a certain play with androgyny. We like how blouses can have a cotton piquet but then be made of soft silk. It’s clear what those fabrics stand for. In everyday life, that can be an interesting statement for a woman dressed quite femininely and not be wearing a men’s shirt, even though all the references are there. And that is something present within the brand, but also within our kind of customer: someone very confident who would want to explore those aspects.

Although there are various things going on in the collection, it still remains coherent. It seems to speak to many different women; there doesn’t seem to be just one “Achtland” woman. Who do you have in mind when you are designing?

Thomas: The garment that we are most proud of is a dress that we just sold to a woman in her sixties who wears a European size 44. We were so proud that our dresses appeal to that type of woman, too. We love the fact that this kind of woman sees herself in our dresses.
Oliver: We always think of her as someone curious, otherwise she would never come across this young label from Berlin. She is confident in her style, and she discovers pieces she likes and then adds them to whatever she is wearing.
Thomas: She knows what she’s looking for; she is not necessarily trend-driven but has some favourite pieces in her wardrobe. It would be a great compliment to us if she would even think of our pieces as heritage pieces that she would pass onto her daughters.

Everything that you make is produced in Berlin. Is this move towards producing things locally important?

Thomas: Yes, the current collection is entirely produced in Berlin. It is much more convenient for us because it’s much easier to control the quality.
Oliver: And to get to know that whole other production side by being in touch with all the ateliers and studios. In Kreuzberg (district in Berlin), for example, there are quite a few we work with, and where we can actually monitor the quality. It’s not abstract and long distance, it’s just down the road, we can go down, look at it together and come up with solutions.
Thomas: It is also great to build up our own infrastructure. In our first collection, we did a leather jacket with some very intricate quilted leather detailing. We had no idea who was going to make the jacket; it was a very large piece. So we asked a man who normally does little leather wallets. He said ‘I have no idea how to do it, but I’m going to try.’ He did it and it looked really nice in the end. It was a great way of developing that relationship, and he has stayed with us ever since.

It seems like a very organic process and a way of ensuring the pieces have the necessary quality and longevity so your client can actually pass it on to her daughters. Any hints about your next collection?

Oliver: There are some Gary Hume pictures that we saw at the Tate Modern: the colours, the perfection of surface and the oversize. In opposition to that there’s something we cited as our Berlin muse from the start – the Neue Museum. To me, just the museum itself is one of the most beautiful museums in the world. When you walk through, there are rooms that are completely renovated – all clean and simple –then there are rooms that are only half-done, and the outside... It is a really nice concept of going through time, working with culture and the history of the city, and it’s very elegantly done. We call it…
Thomas: …neo-romanticism…
Oliver: …in quite a beautiful, architectural way. We are looking at the museum and looking at how its painted surfaces fall apart, and there are these exposed walls. There is paint on paint on top of more paint on top of mosaics. That is something we are working with, technique-wise. With our silhouettes, we are referencing quite disciplined contemporary modern art paintings, almost a bit pop. 1950s tailoring also comes to mind, because they have these lovely shapes they drape and work with. Many ideas, but it is a continual process of refinement. We are always refining. 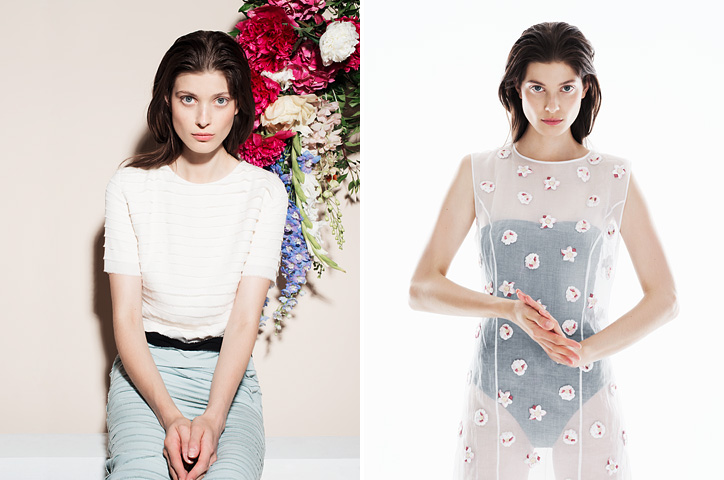 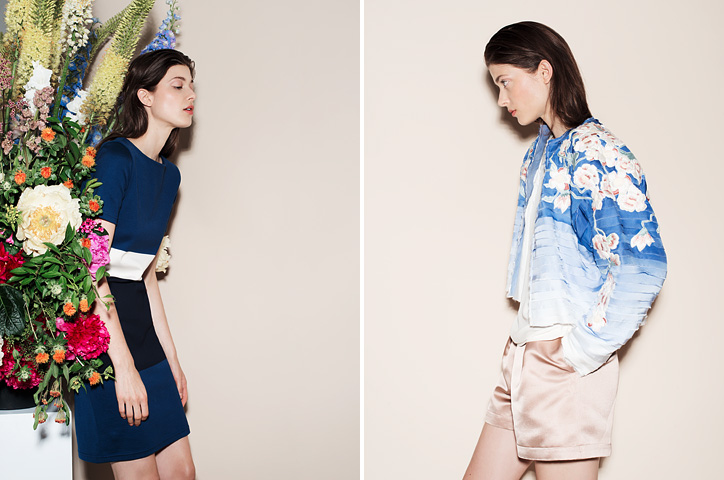 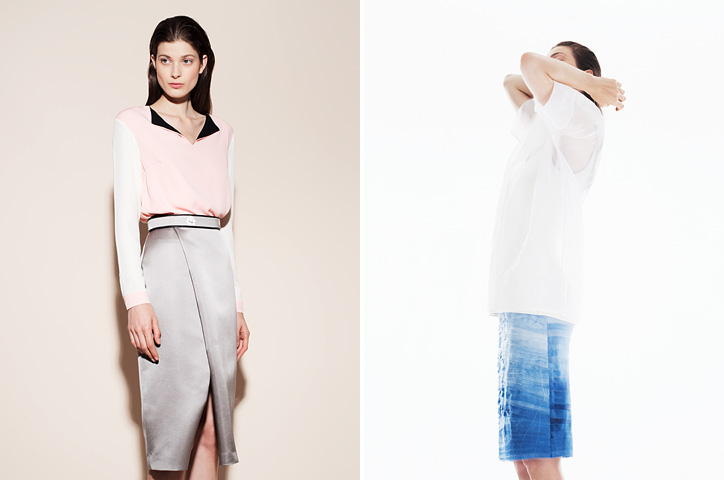 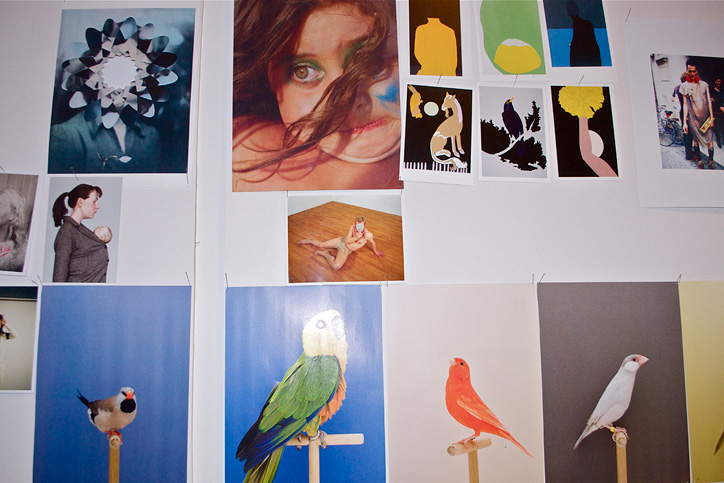 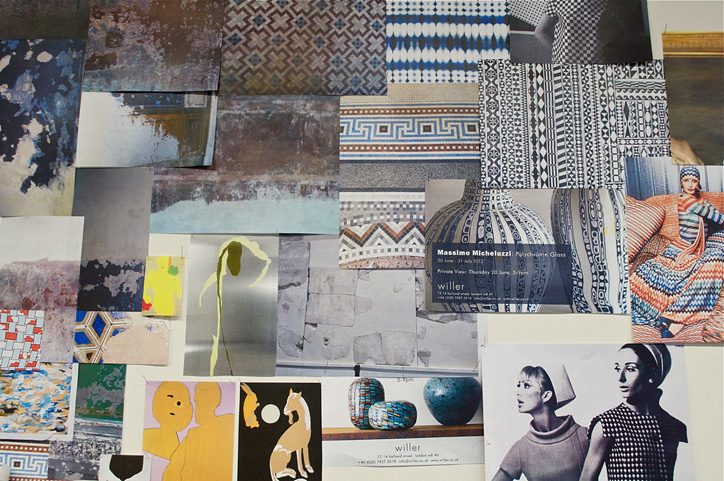 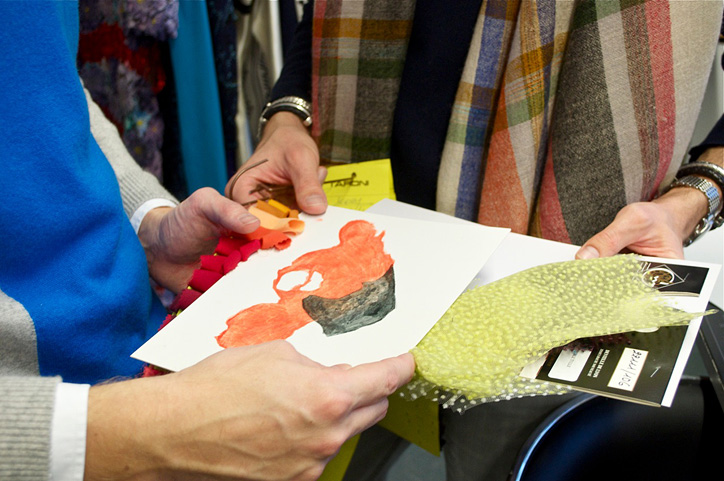