The beauty of loneliness

Created in collaboration with other like-minded creatives and featuring muse Charley Royall, Logan Rice describes his new film, Distance, in three words: nostalgia, dreaming, and wandering. Set in one of London’s beautiful parks, “desolate, open, and secluded from real life”, his newest creation is curious, emotional and captivating.
“I really wanted to make something nostalgic feeling and kind of dark that captured someone in an environment that could've been anywhere in the world. I wanted to focus on the subject and nothing else because, at this time and place, she’s all alone, in her own world, and very content with it”, tells us the director. “Distance comes from Charley’s relationship with the world. She is so free, so distant from society and lost in her own mind that nothing else around her seems to matter. The voiceover is supposed to be a narration of what’s going on in Charley’s head from an outsider’s perspective”, continues Logan about this powerful project and the meaning behind this beautifully captured film.

Alongside the filming and atmospheric instrumental soundtrack, there is a poem written and narrated by the talented Jessica Wolfe. Interestingly enough, when asking Rice about the collaboration involved and how each element generally evolved, I was surprised to learn that this was the last layer that was added in addition to the film. “I knew I wanted to add another element to the project, so I sent Jessica the film and told her the story and meaning behind it and gave her freedom to write a poem to go along with it. The first thing she sent me was basically perfect; we changed a few things and then, shortly after, we recorded the voiceover as a sample for timing and it ended up working so perfectly that we used it for the final product.”

Towards the end of the poem, Jessica reads a line that goes, “I found there are always new things for my eyes to see, sometimes far away, and others very close, too close”. Asking Logan how he interprets and relates to this, he admits, “I feel like, at least for me personally, I am always discovering and searching for new things, ideas, feelings. Sometimes, maybe so hard, that the simplest and most important of things get overlooked. Lots of time could be spent searching for something that was right in front of me the entire time. I just couldn’t bring myself to see it from the beginning.”

Taking the creative process back to the beginning, before the poem and before the film came to life, Logan gives us the descriptive story of how his ideas evolved and who, why and where was involved. “It all started with being in London and wanting to do a personal project, so I reached out to a friend who was with an agency out there and was able to get Charley on the very last day of my travels. From having her as a subject, I knew I wanted to shoot something in one of the beautiful parks of London, something that seemed very desolate, open, and secluded from real life.”

And once he got this, “The rest came into place on the day of the shoot collaborating with Caitlin on the different clothes and seeing the way Charley was on-camera dressed in them. The colour was done by my good friend Dante, who has been colouring almost all of my projects lately, and the music was done by someone I knew via Instagram and had been wanting to work with for quite awhile now.”

But why did he choose to collaborate with so many people for the making of Distance? “It honestly depends on the project. Sometimes, I do almost everything, and others, I delegate tasks to other people and get as many creative people involved to help make something happen”. Regarding specifically his recent film Distance, he said, “I wanted to make something really special and a bit different from my other work so I brought alongside a number of people to take my general idea and bring it to life. Everything from the styling to the voiceover, music and colour was a collaborative process between myself and the team.”

Logan Rice is one to watch. At a fruitful twenty-two years of age, he has already established himself in the world of film. An impressive portfolio and experience working with top dog clients, and he is just at the birth of his career – it can only get better from here. A childhood spent in Michigan, he then decided to follow his fascination for film and found himself in Los Angeles. A fashion enthusiast and childhood skater boy, Rice explains, “When I was around eleven years old, I spent all of my time skateboarding with friends. I started borrowing my sister’s video camera to film them skating and realized I was better at that than actually skateboarding. I would travel across the United States with them documenting our skate trips. From then on, I always had a camera with me.”

Rice describes his work as primarily focused within the fashion world. However, his eclectic portfolio proves his versatility and showcases the likes of music videos, sports related films, personal projects and so on. When asked about the nature and general themes within his work, Logan tell us, “I don’t really know how to describe my work. While most of my personal projects are very eerie and moody, the work I get hired to do is more cinematic or fun and light-hearted. I tend to lean towards the dark / moody side of things when I can though because it’s what I’m most drawn to as a person, at least right now. My music taste, love for night time, and feelings towards myself as a person are kind of the inspiration behind that.” 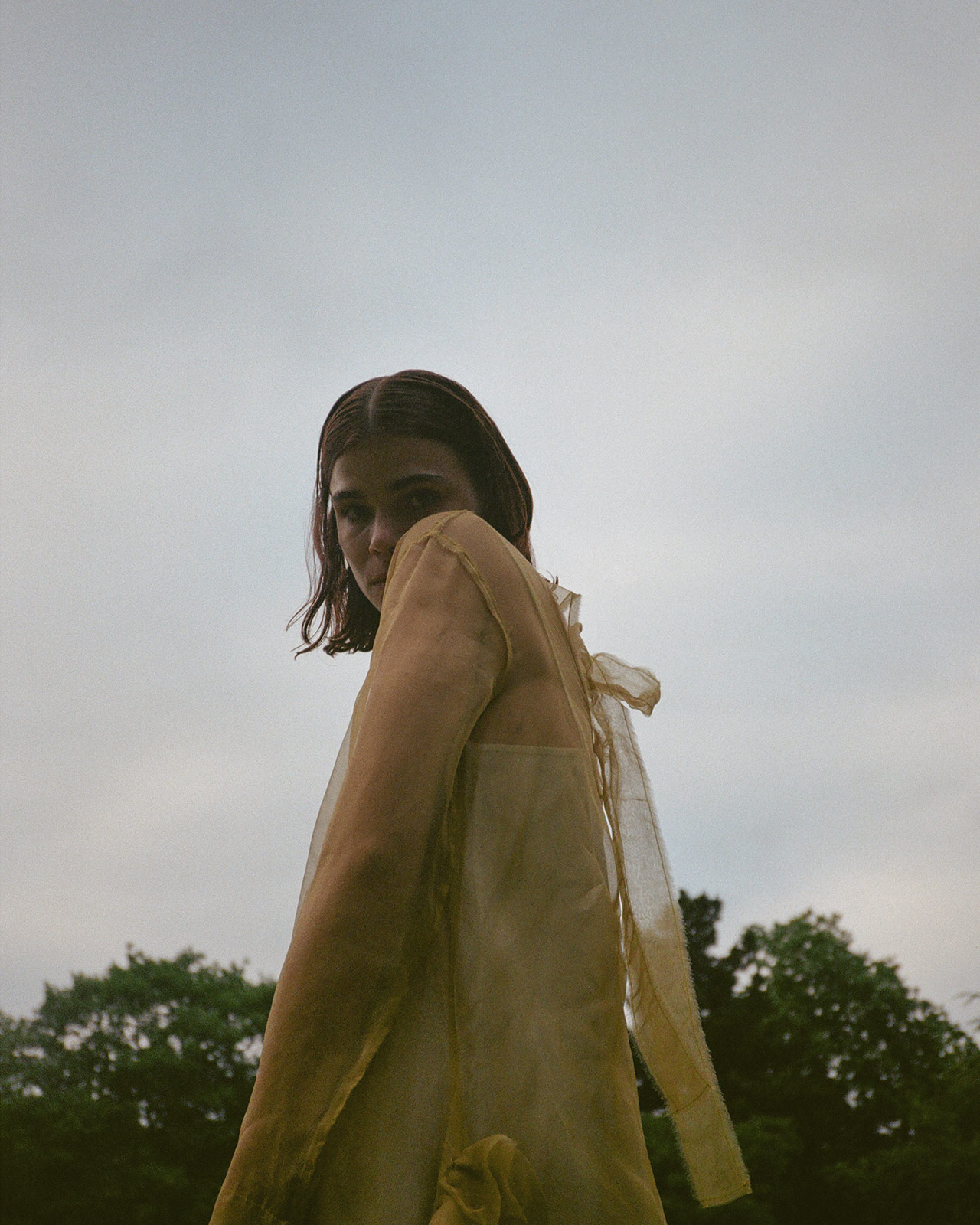 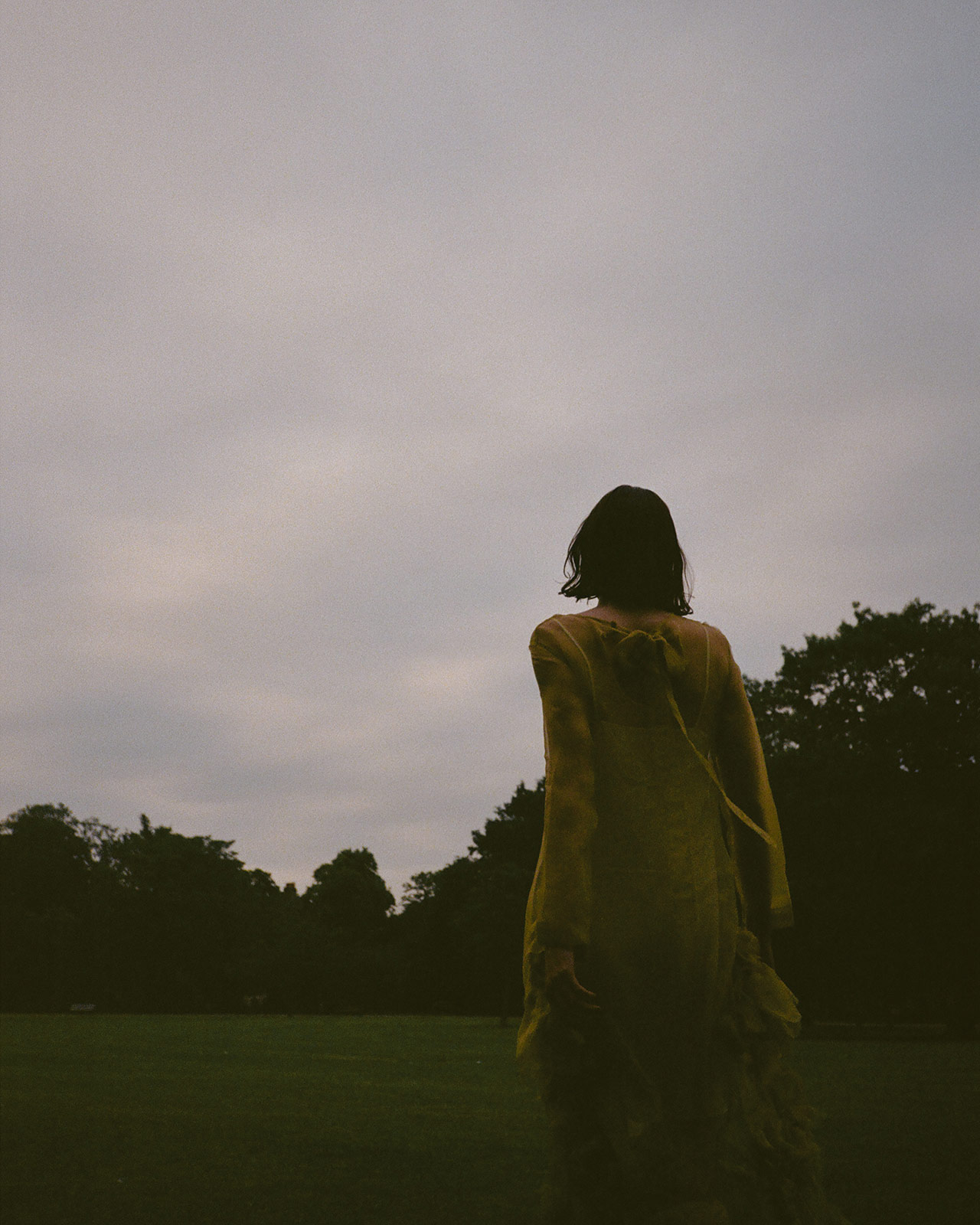 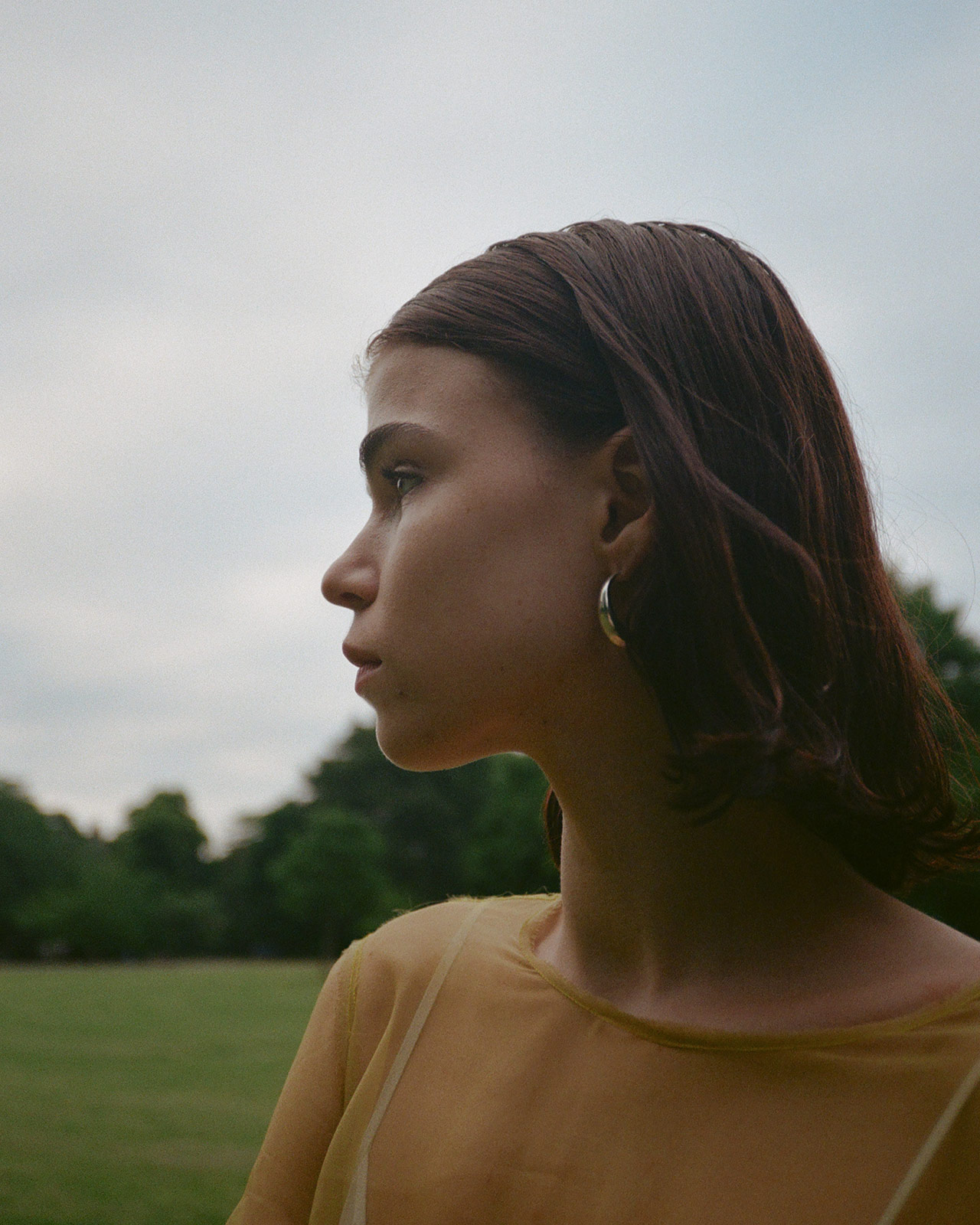 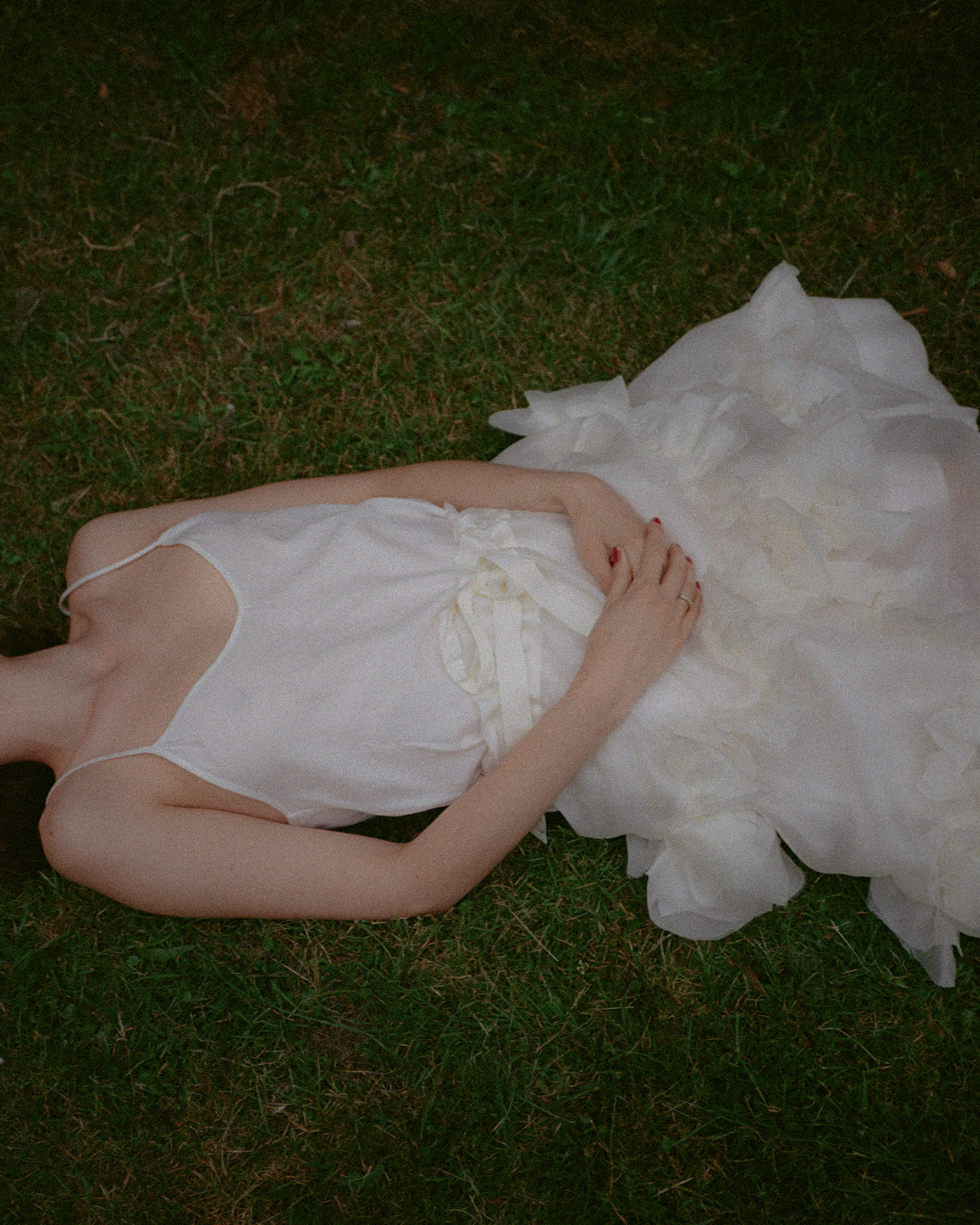 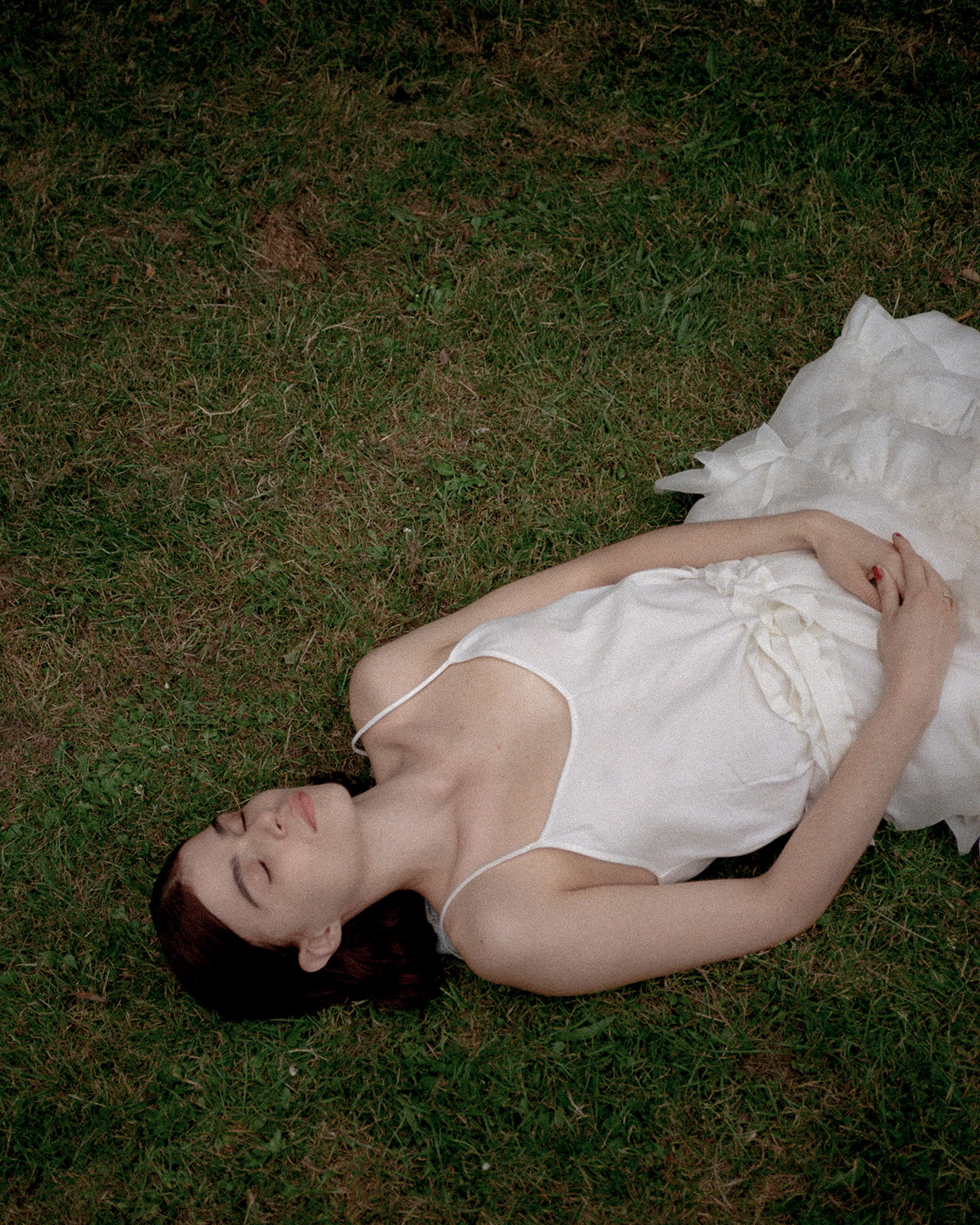 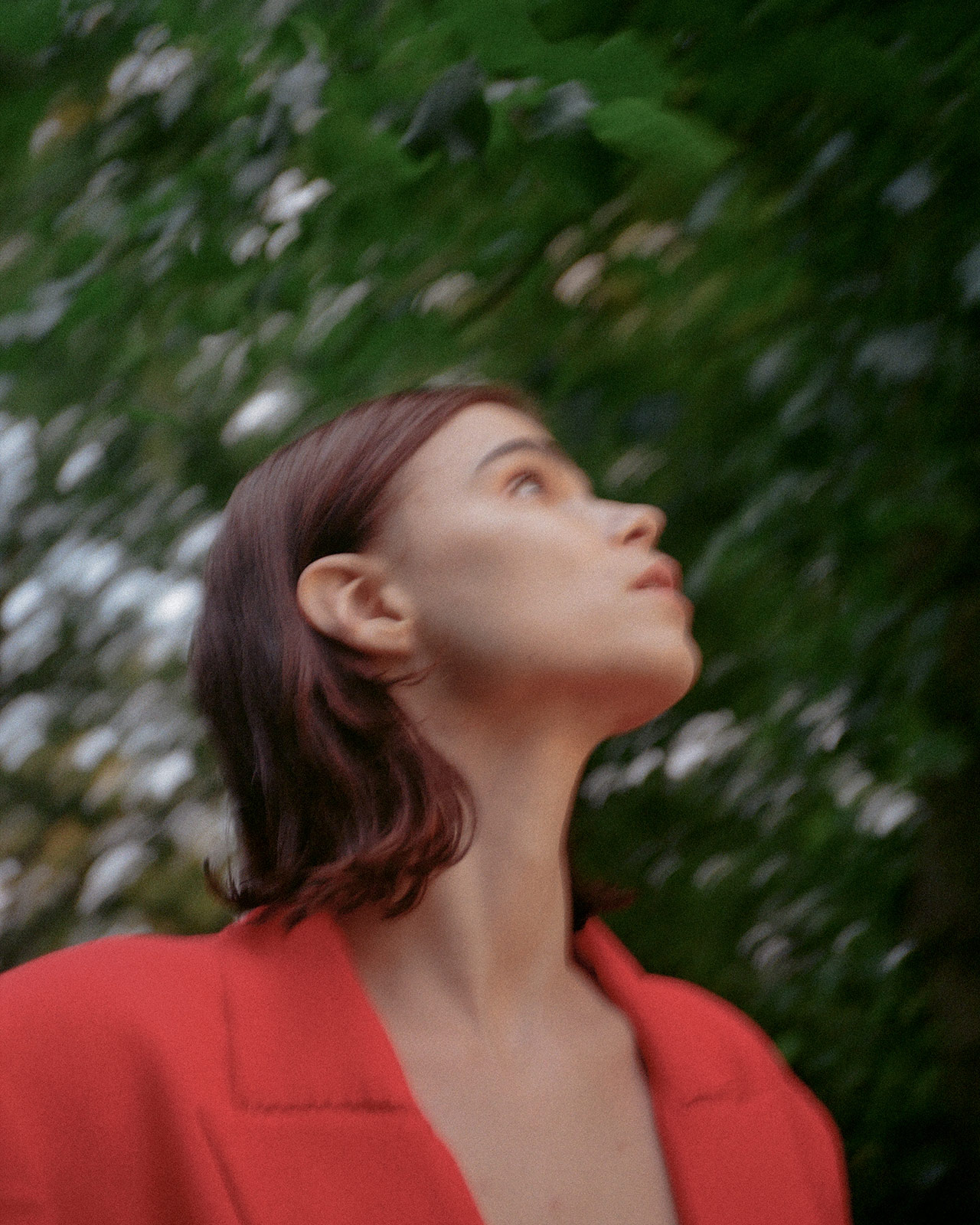 Blazer and trousers TEATUM JONES.
I once thought
my eyes could only see as far
as the distance I could walk in 10 minutes.
Then I realized, as I walk the horizon moves.
It moves with me.
My vision stretching as far as that moving,
unattainable horizon.
My dreams became attached to that scope,
with me it moves
and because of it I keep moving.
I’ve found there are always new things
for my eyes to see,
sometimes far away
and others very close,
too close you almost don’t see it.
Like a broken clock in the corner of the room
that you don’t notice isn’t telling time
until you need it to.