Speaking publicly about the issues that matter has become imperative, especially at a time when the world promises to change forever. And it is precisely this active debate what Is It News defends, a new interview platform created share opinions on the challenges that we face as a culture and society, while trying to answer major questions that demand a deeper conversation. Their first guest? The unique Rina Sawayama, star of one of the covers of our latest issue, METAL 44, whom we will see today on the first episode at 6 PM (BST) on their YouTube channel.
Tafari Hinds and Clément Cornebize realised that the first thing they had to do to change the world was to understand what aspects of society needed immediate transformation. A revolution that is intrinsic to culture and art that demands new voices and well-known characters from different fields to generate a rich conversation that leads to valuable conclusions. And even more important, to present it in a format adapted to the present moment, interesting and attractive for an audience that spends more than half of their day on the Internet and social media. Their solution? Is It News, a platform in which, through short videos with people who have much to say about the present and future, they put issues on the table so we can join the conversation.

Rina Sawayama, along with the always pioneering Vivienne Westwood and Luca Benini, founder of Slam Jam and co-founder of Alyx, are the protagonists of the first three episodes, which are between fifteen and twenty minutes long and make up a first series that promises to establish itself as one of the most revolutionary initiatives in recent times. And the interviewees, the format they have gone for and mainly the topics they address answer to something we have been waiting for a long time. Today we will discover what Rina Sawayama thinks about the representation (or lack thereof) of minorities in culture, and many other issues that have not been revealed yet. Meanwhile, we talk to its founders to understand all the details of the platform. 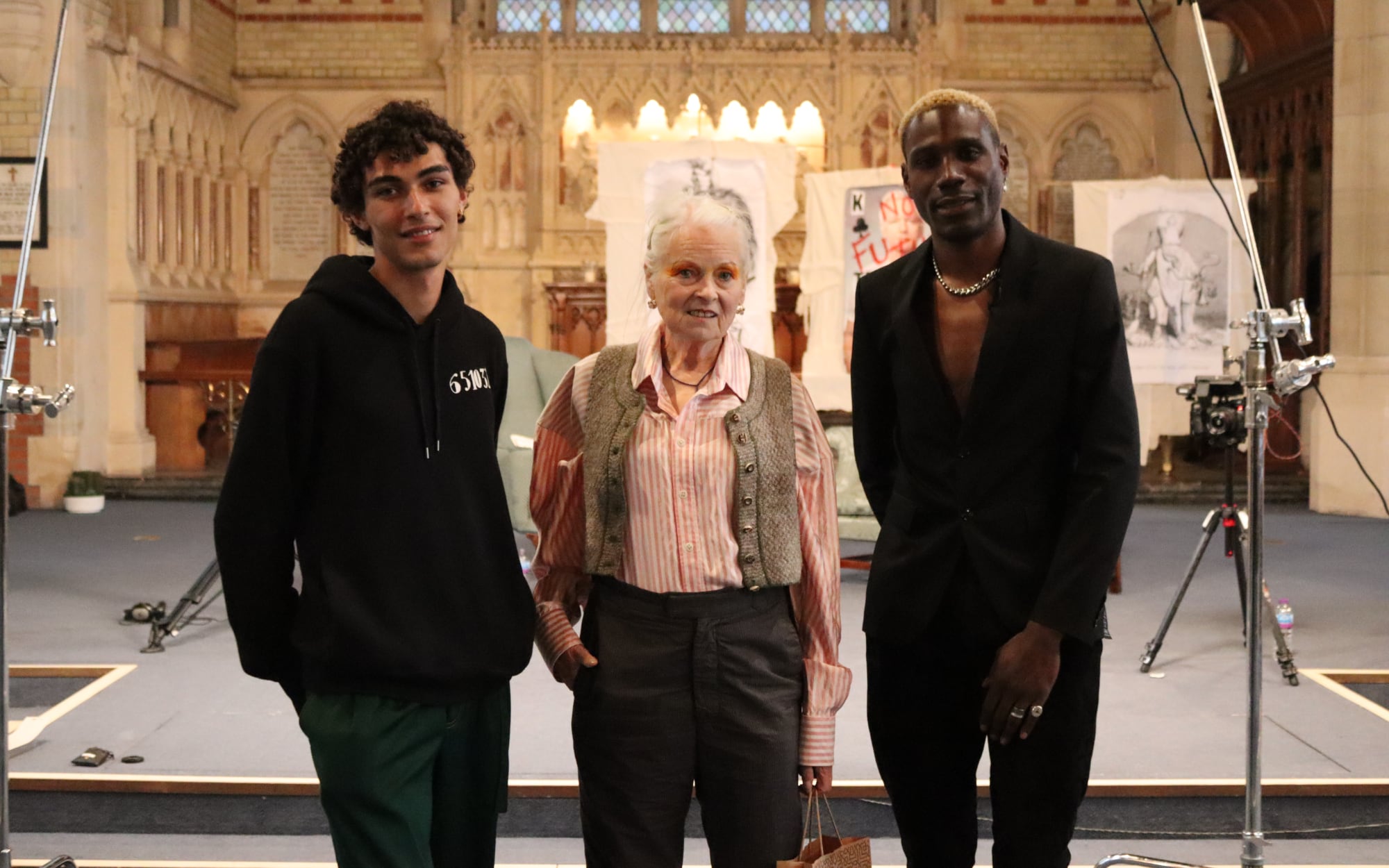 In a world filled with different media platforms, Is It News is born out of the goal of bringing a fresh and deeply sourced perspective of the creative industry. How is the platform different from other media outlets?
Tafari and Clément: We believe that Is It News being born in the pandemic already differentiates itself from other media outlets established pre-pandemic. This is because, only after Covid happened, people started being more conscious of the world around them, therefore, pushing the media industry to reevaluate and reinvent the ways they bring communities together. This is why our aim was to disrupt the outdated media contexts with an objective to feature talents by giving them a space to highlight the causes and things that they deeply care about, and that they would not easily express in the mainstream.
Tafari: Moreover, like often happens in the creative industry, if you don’t have the establishment supporting you, then you are often at a disadvantage. However, this pushed me and my co-founder, Clément, with our small team, to come out harder than ever with electrifying visual content and involving the talents and communities around them to highlight causes, charities and bring about change.
Right from the start, Is It News already presents a powerful group of interviewees, beginning with Japanese-British singer and songwriter Rina Sawayama. Is there any characteristic in common among the platform’s guests?
Tafari and Clément: When we first came together to produce this show, it was at the height of the pandemic around the time of the tragic death of George Floyd which ignited the Black Lives Matter movement globally. Therefore, we wanted to do a show that is not only based on the celebrities but to use their influence to change the narrative. We found out that many were doing a lot of good, we just weren't hearing about it. In addition, celebrities are managed and are not always allowed to say what they really want. Even on social media. All the guests featured on Is It News share one thing in common, they all have something to raise awareness on.
In terms of medium, why were series of short interviews the way chosen to bring Is It News to life, rather than other types of media?
Daniele: The digital age is here and it has accelerated time. Viewers are nowadays more easily engaging with content that is authentic, organic and straight to the point. Therefore, we wanted to move forward from the outdated formats by producing short video interviews that educate, electrify and provoke thoughts.
The fashion industry has been facing many changes in recent years, and, more than ever, it is important to vocalise the need for rewriting outdated behaviours, especially when it comes to environmental and ethical ones. As a new platform featuring the views of well-established creatives, how will Is It News use such to promote awareness?
Tafari: I’m surrounded by a diverse team with insightful views and perspectives on the world. This opened a new mind frame for me after 15 years in a fashion industry that was too slow on changes related to representation, sustainability and cultural appropriation, to name a few. For instance, Daniele wants to one day create a new kind of politics around environmental and ethical practices in the fashion industry in the European Union. Clément, who is French-Morrocan, would like equal rights and inclusivity of minorities and young people in a white privileged France and in the creative industry.
Daniele: Thank you Tafari for your kind words. This shows that Is It News presents in its ethos and team the real sense of organically raising awareness. Moreover, for our first series, through the voice of authentic advocates of the likes of Sawayama, Westwood and Benini, we promoted awareness on meaningful issues by highlighting the groundbreaking and innovative work of charities and organisations.
In the past year, we’ve seen many advocating for collective justice, both in and outside the entertainment world. How will topics such as the Black Lives Matter movement and the increase of hate crimes towards the Asian community be addressed inside the creative industry on the platform?
Tafari and Clément: In the episode with Rina Sawayama, she shares deep insight into the differences between Asia and Western society. We learnt so much from the interview. We saw that being a British-Japanese pop star, she represents two different cultures at the same time. We think that Asian hate crime is the result of misinformation of the causes and stigma surrounding the pandemic. Alongside Rina talking about Asian communities, Vivienne did not shy away from speaking out on BLM and racism, also mentioning the booming of protests there have been over her lifetime. While Luca Benini, founder of Slam Jam and co-founder of Alyx studio, pointed out that the gap between his generation and new ones is the sensibility towards issues such as sustainability. That is why he decided to partner with Matthew Williams not only because of his talent but especially for Williams’ ethicality towards a more sustainable industry. At Is It News we address important topics by letting the talents say it as it is and, as Daniele aforementioned, we care about getting the message across by highlighting and promoting the works of charities and organisations who are making our world a more inclusive and sustainable place.