On September 13th 2022, Iranian-Kurdish woman Mahsa ‘Zhina’ Amini was arrested by the Islamic Republic of Iran’s extrajudicial ‘morality’ police. Her crime: an alleged breach of the Islamic Republic’s mandatory hijab laws. Eyewitnesses reported her being violently battered by police. Within hours, she was taken to a hospital in a coma, 3 days later, the 22-year-old died. Mahsa’s death triggered wide-spread anti-regime protests across Iran sparking what we now know to be the first female-led revolution in history. A revolution which was met with severe government crackdowns. German Iranian filmmaker Omid Mirnour sheds light on the atrocities taking place by the Islamic Regime in his new short-film entitled Corruption on Earth, a political parody and satire which aims to critically depict the deplorable human rights violations and living conditions endured by Iranians since the 1979 Revolution. 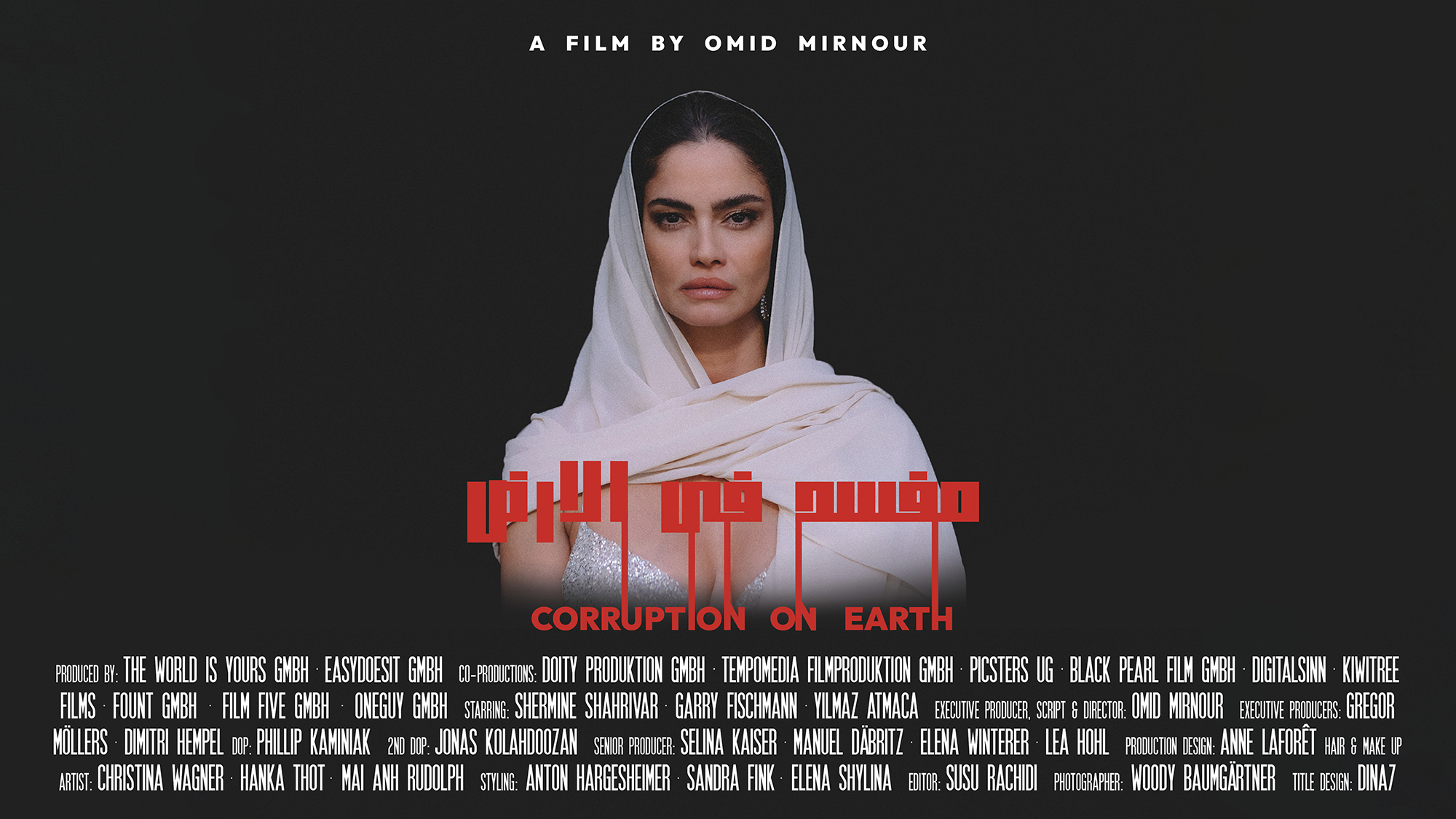 In his own words: “The film was based entirely on true events, yet deliberately told in a satirically provocative manner in order to open the eyes of many. Because silence and doing nothing only fuels the whole scenario.” The film materialises a fictional award ceremony in which the Islamic Regime of Iran is notoriously selected as the ‘Best Regime in the World,’ for decades, gender inequality and discrimination against women have been legally enshrined in Iran, arbitrary detention, torture and rape are some of the practises used by the government to maintain the state’s gender apartheid. As the film unfolds, we are met with an emotional turmoil, reality and fiction come together as Mirnour fuses real footages of the ongoing protests and civil unrest alongside the fictional award show highlighting the absurdity of the situation.

The use of the death penalty is widespread in Iran and unfortunately, executions without fair trials have now resumed. Protestors are facing sham trials, no access to legal council or any meaningful appeals. Torture-tainted “confessions” have also been used against defendants in court. Most of the charges are vaguely formulated and include “enmity against God” (mohraebeh), and the film’s own title “corruption on earth” (efsad-e fel arz). In a lamentable and horrible attempt to quash the popular uprising, the Islamic regime is grossly resorting to the death penalty as a weapon of political repression.

There is a dire crisis of impunity throughout the Islamic Regime which has enabled Iranian authorities to kill, torture, imprison and ill-treat thousands of protestors without fear or consequences. Prisons throughout the country are flooded with students, artists, actors, doctors, lawyers, LGBTQI+ and ethnic minorities which demand freedom of speech, civil liberties, bodily autonomy rights, and a secular state. “I also wanted to set a sign for my imprisoned Iranian film colleagues, musicians and artists and those who have received a professional ban in Iran, although they have done nothing more than produce critical art,” he states.

The fight against the patriarchy is a global one, everyone should know about the revolution taking place in Iran right now, and the heroic deeds of the brave Iranian women who have been challenging misogyny should not be left untold. Corruption on Earth is an excellent summary and rundown of the reasons behind current revolution and uprising, as such, we encourage all of you to see and judge whether the Islamic Regime is in effect, the ‘Best Regime in the World?’