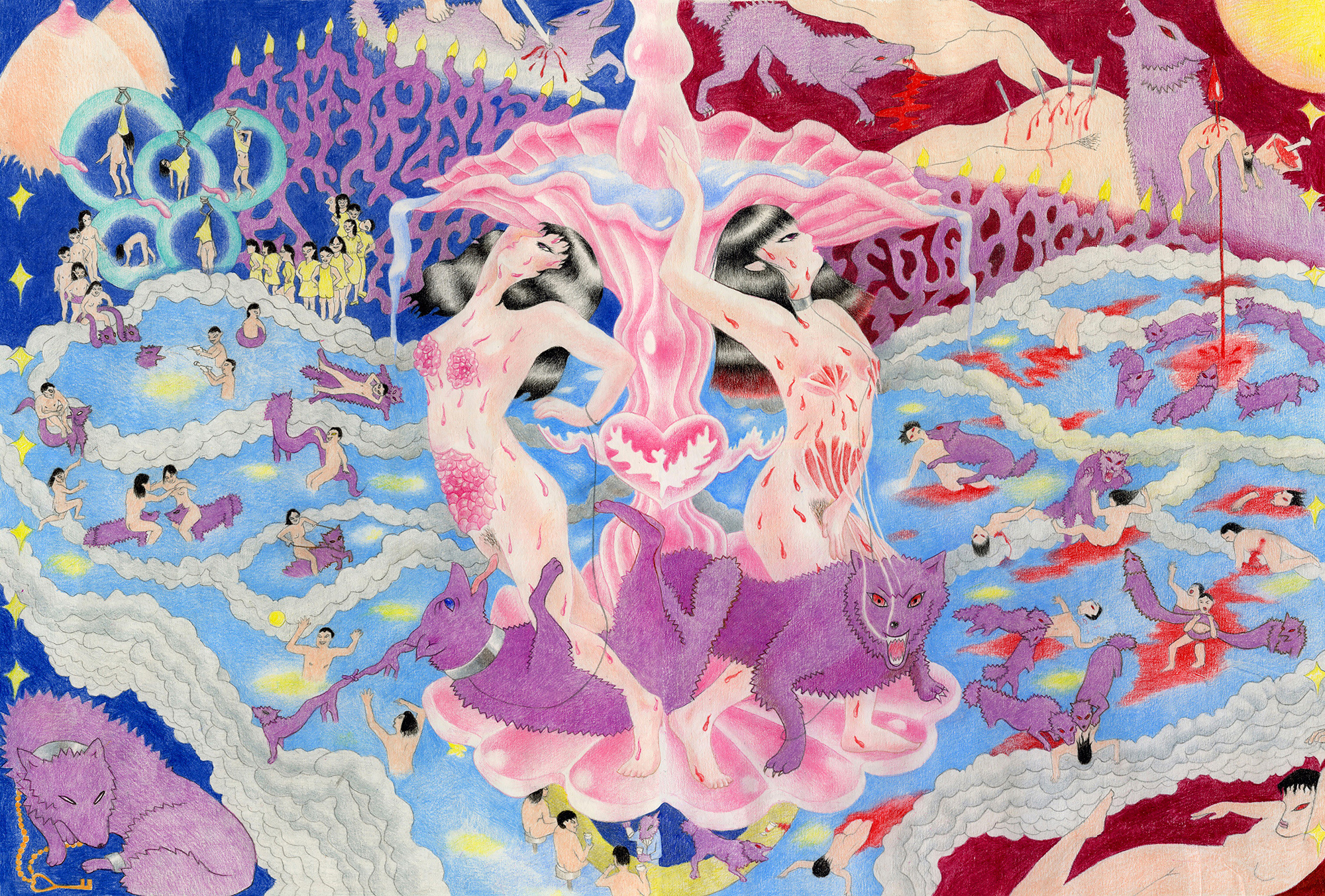 Yue Li’s rare talent in watercolour paint, digital software, and even coloured pencils have led to her ability to create some of the most magnetising and transcendental women-centred creations, which her most recent exhibition Water Stitches consisted of.
Despite her freshly-graduated status from the New York City School of Visual Arts, Li has already begun to prove herself as a unique artist through her intricate and deeply personal style that evolved during her college years, but also through her own interests, some of which include Dunhuang wall paintings, Mandarin films, and Southeast Asian Islamic paintings. Her influence from alternative Scottish band, Cocteau Twins, is not difficult to catch sight of in some of her work either, like Genesis and Girls’ Bathhouse.

Li beautifully exemplifies women’s relationships and the purest forms of affection which we as women show one another; she does so without falling victim to fetishisation, like many depictions of female relationships in today’s media do, bringing us back to the innocence of our youth and granting us security and pleasure in dreaming of a matriarchal utopia. 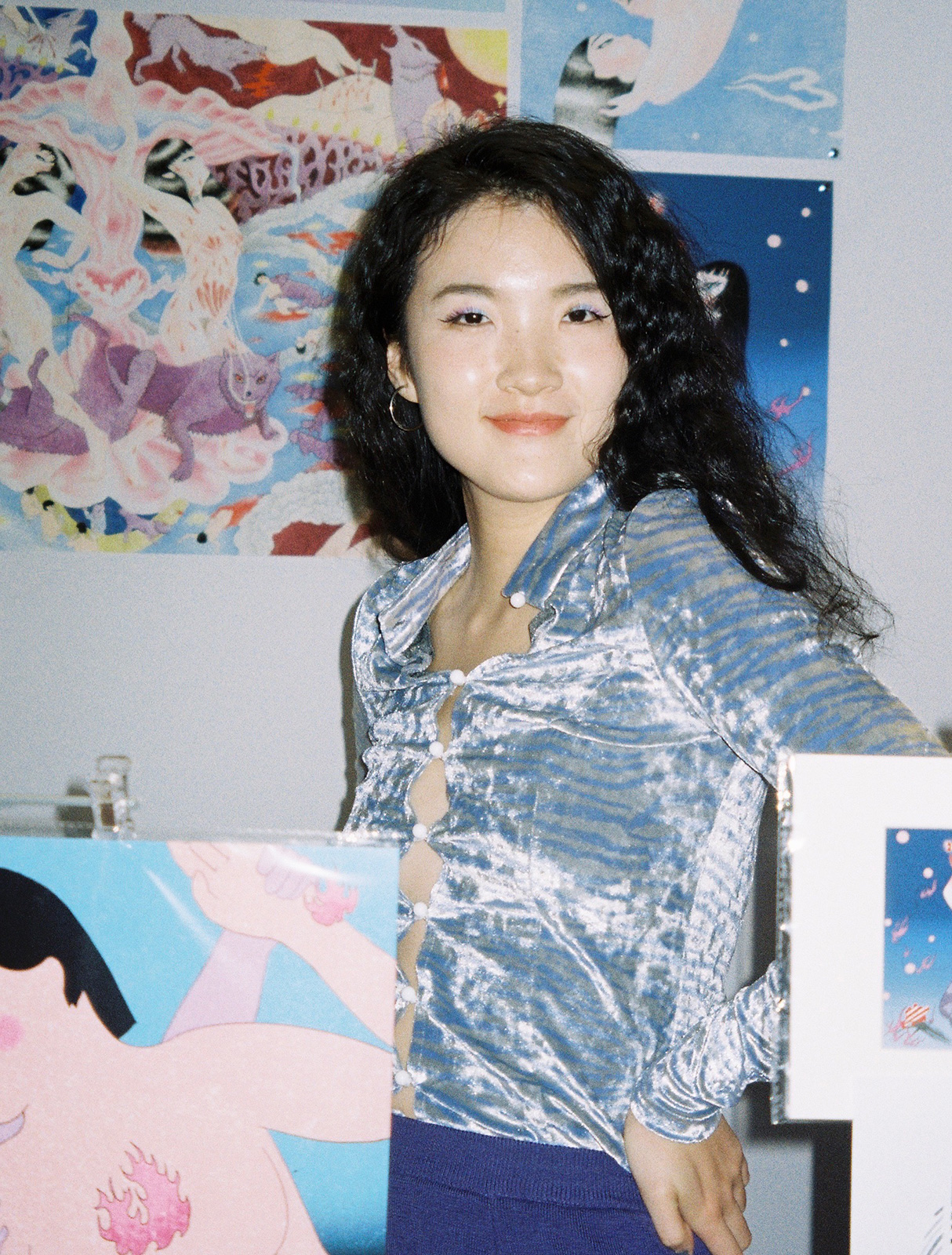 Today we have the pleasure of having a conversation with Yue Li, a New York City-based artist who makes art using watercolour, digital media software, and even (what we believe to be the simplest medium) coloured pencil, oftentimes combining two of these mediums for one piece. Where are you today, Yue?
I am currently enjoying my summertime here in New York City with my cat. I graduated this year and have just worked as a freelance illustration artist.
You recently graduated from the School of Visual Arts in NYC. Tell us a bit about that experience; did your time there contribute to how your own personal style has matured over the years?
The 4 years at SVA definitely did contribute to every step leading to where I am now. I remember in my first and second years I was working with all kinds of materials, including sculpture, fabric, wood-cutting, etc. I believe that set up my openness and willingness to materials and that experimental side is still in me deeply today. I enjoy working with tangible materials like coloured pencils and watercolours much more than I do with digital drawing media. I also keep reminding myself not to put myself in one style and not dare to change it just because it’s my comfort zone.
2022 has been a momentous year for you so far! How are you feeling now that your exhibition, Water Stitches, is over?
I feel very happy with how the exhibition turned out and the friendship I made with the wonderful people at the gallery. Water Stitches is a great conclusion to my art chapter for 2021 and 2022. I feel like I am ready to go on and experiment with more visual languages that are new to me. I always want to set absolutely no limit in my art and I always feel like the freedom in it gives my work the most energy. I’m grateful for everything that comes to me so far this year and I will keep this memory in me forever.
Your work is predominantly centred around the spirituality of women, in which you also incorporate nature and animals, evoking the moving concept of being at one with the earth and all its intuitive qualities. One piece that comes to mind is Queendom, which measures 17x37 inches. For this piece you have used coloured pencil on paper, mostly blues, pinks, and greens, to illustrate the women embracing one another, swimming in the ocean, and swinging from great vines. How long did it take you to complete this particular piece of art?
It’s one of the pieces that took me the longest time to make so far (laughs). From plotting it to the final touch, it was around 2 months. Creating spiritual art like this one is like meditation for me. Thus, I only made progress on it when I was in the zone, feeling inspired and at peace. I wanted to take it slow. I was feeling very strongly about creating a matriarchal world that embraces femininity and the friendship between woman and woman. I included all the feelings I have toward the topics related to womanhood and their societal expectations of them. 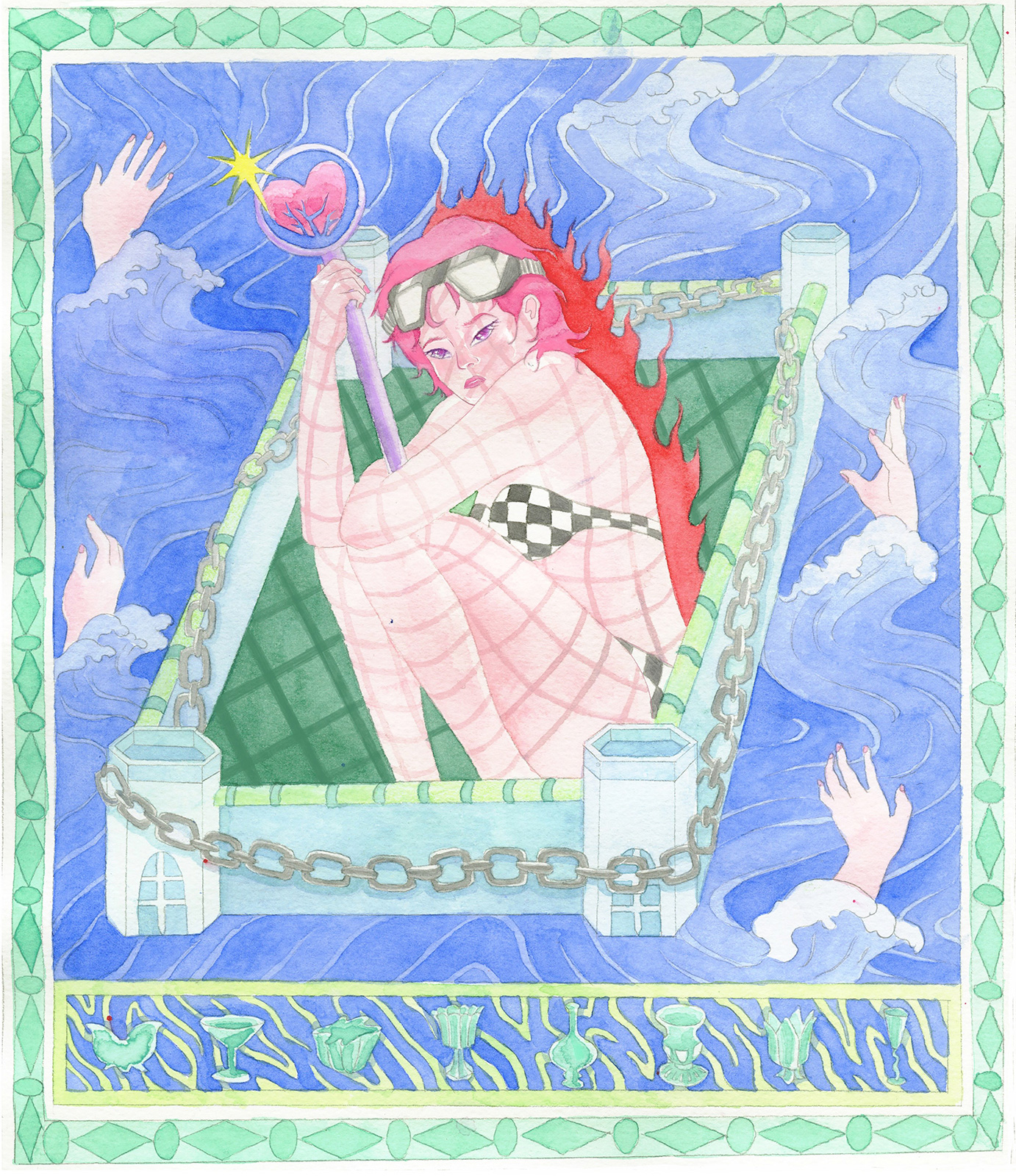 For many of us, coloured pencils were the first art medium that we were introduced to in art class, whether it was to draw our own creations or colour within the lines of someone else’s. Since it is relatively uncommon, what makes coloured pencils one of your preferred mediums? Do you find that it requires more patience and sensitivity than those that are more commonly used, like watercolour?
Coloured pencil by its nature is a very time-consuming medium compared to other mediums. What I love about it the most is that it feels like weaving to me. I love how time-consuming it is and how I can take it as neat and slow as I can. With coloured pencils, I can lightly lay my strokes on paper, layer by layer, seamlessly ‘weave’ colours next to each other. I also feel like with coloured pencils, the drawing can be ‘complete’ just with very light layers of colours because the pencil texture within it is already very rich and full.
Some of your works are like a modern, feminist take on Chinese traditional art. Are there any specific periods, styles, or artists that have contributed to your own art, whether in the very beginning or continue to inspire you to this day?
I really enjoy looking at folk and outsider art, outside of an academic context. I believe there’s a level of originality in that art that academically-trained artists might not have. The way they depict the world and the way they compose a picture can be very unique, pure and surprising. From artworks including Ukiyo-e, Dunhuang wall paintings, Southeast Asian Islamic paintings to Mandarin movies, I love to be inspired by work that documented the harmonious existence between humans and nature, and that embraces spirituality and emotions.
Coloured pencil definitely adds to the ethereality your work represents, especially with how you are able to intermingle colour hues in Girls’ Bathhouse, creating more depth and elevating the fairytopia aesthetic. Outside of art, what are some other inspirations – perhaps in film, literature, or music – that influence how and why you create?
I love to listen to Cocteau Twins while I draw. They always take me away from the concrete world to a place that’s dream-like. Aurora is one of my all-time favourites too and her music is also what I was listening to while creating Girls’ Bathhouse. Watching movies is one of my hobbies and some of my favourite films recently include Daisies by Věra Chytilová, Belladonna Of Sadness by Eiichi Yamamoto, Tropical Fish by Chen Yu-hsun and Song of the Exile by Ann Hui. I am particularly drawn by films that depict the narrative of womanhood, the nostalgia for childhood and nature. 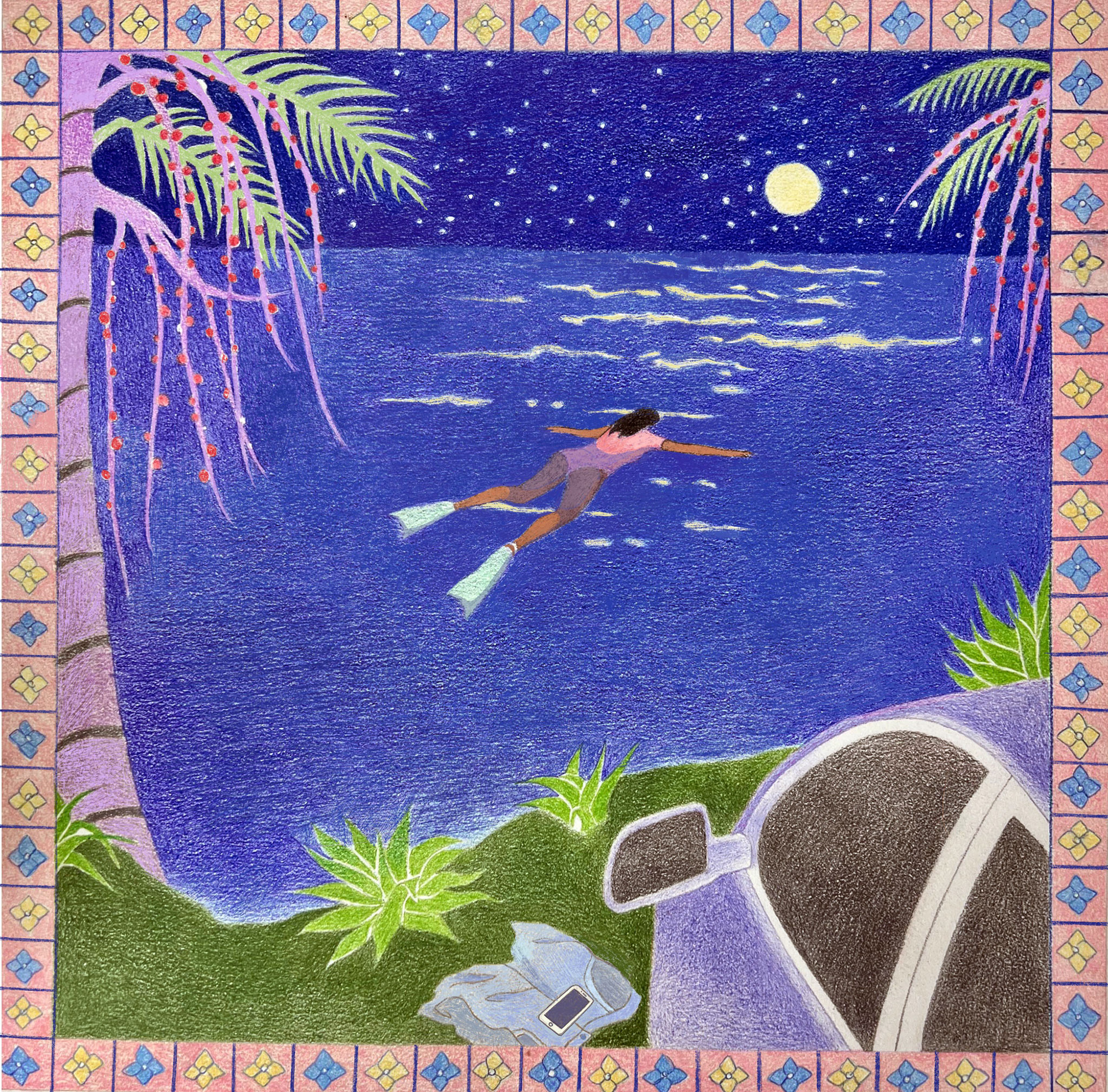 As mentioned prior you also work with digital software to create your art. What would you say dictates whether a piece will be made using coloured pencil, watercolour, or digitally? Have you ever begun a piece one way and then switched halfway through, upon realising that a different medium would be more suitable for what you wished to create?
Changing into different mediums happens all the time (laughs). I usually sketch out my initial ideas on paper and I finalise my sketch digitally on my iPad. Then I print out my finished sketch and trace it on my watercolour paper. And from that on, I colour everything with a coloured pencil or watercolour. This is the usual way of how I work but there are also many times that I thought I would be finishing one piece digitally but turns out I am more satisfied with a hand-drawn version.
I don’t say no to digital media but in most cases, I am much happier with the outcome when I use traditional media like watercolour and coloured pencils. Almost every time, the pigment itself would surprise me with visuals that I did not plan to have and that often does not occur with digital media. I love the beautiful ‘accidents’ that happen along the way.
Would you ever make your art available for people to buy online or do you prefer to create fewer and more distinctive pieces through commissions?
I would want to make my art more available to the audience because I want art to be enjoyed, rather than being idolised. I would also want to make my prints to the high quality that I want and in reasonable quantity so that I can feel like people who appreciate my art are being treated with respect.
What else does 2022 have in store for you?
I am very excited to create more work that reflects my spiritual journey with myself and the world I’m in. Making art is like meditation and I want to continue having that in me. For the next few paintings, I want to include more storytelling and more complex characters. I am also looking forward to working more with the subject of music and creating visuals for musicians or bands that I like. 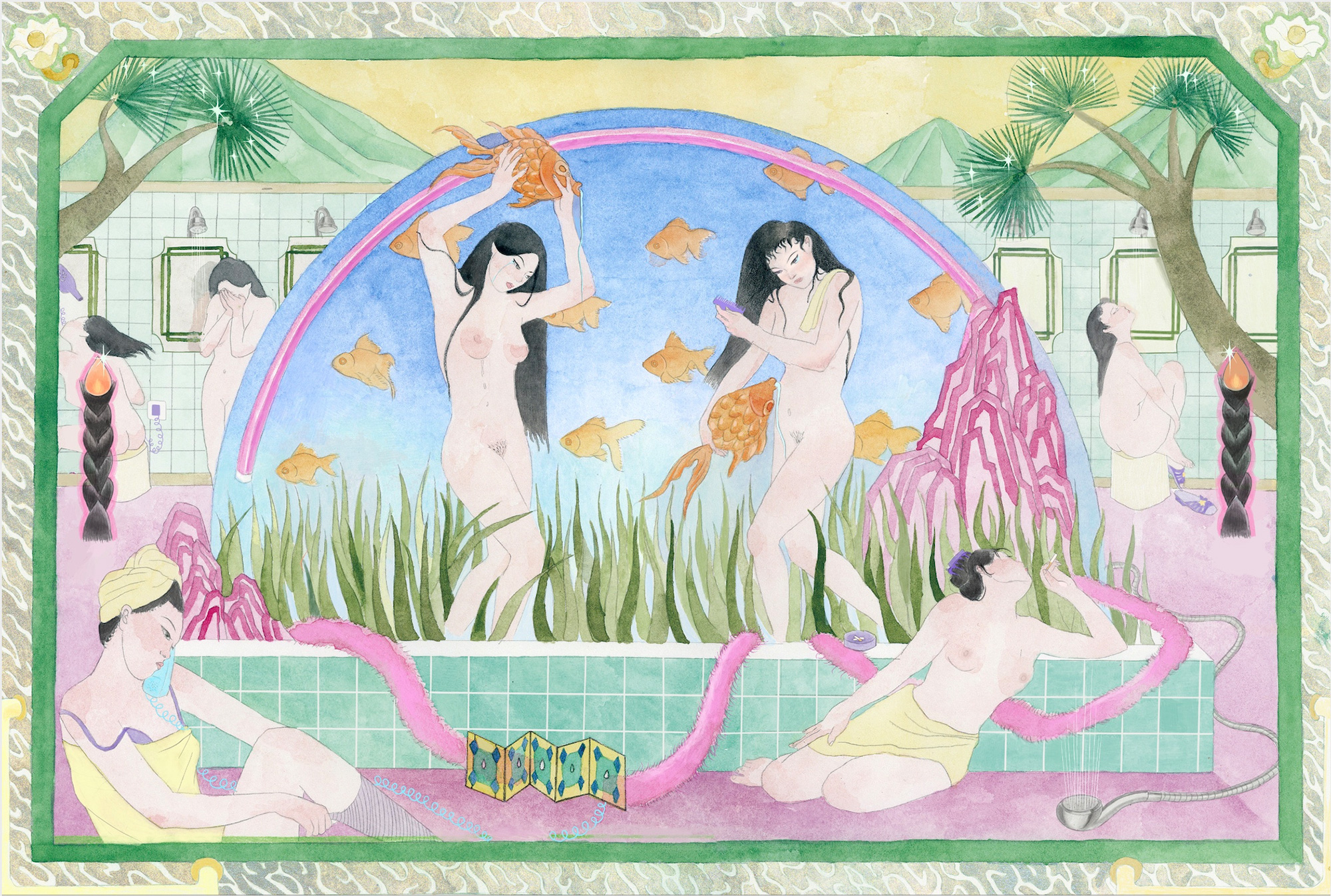 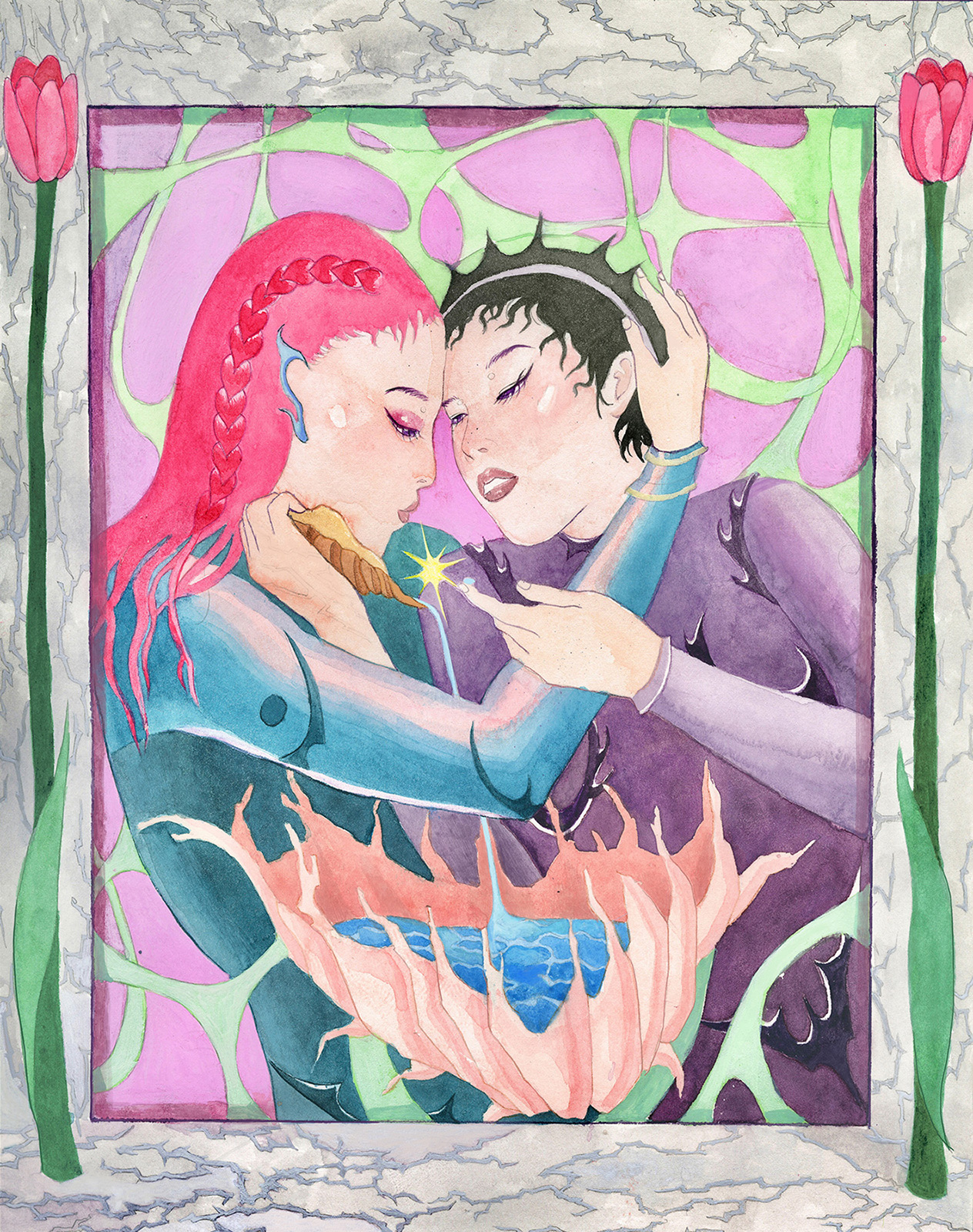 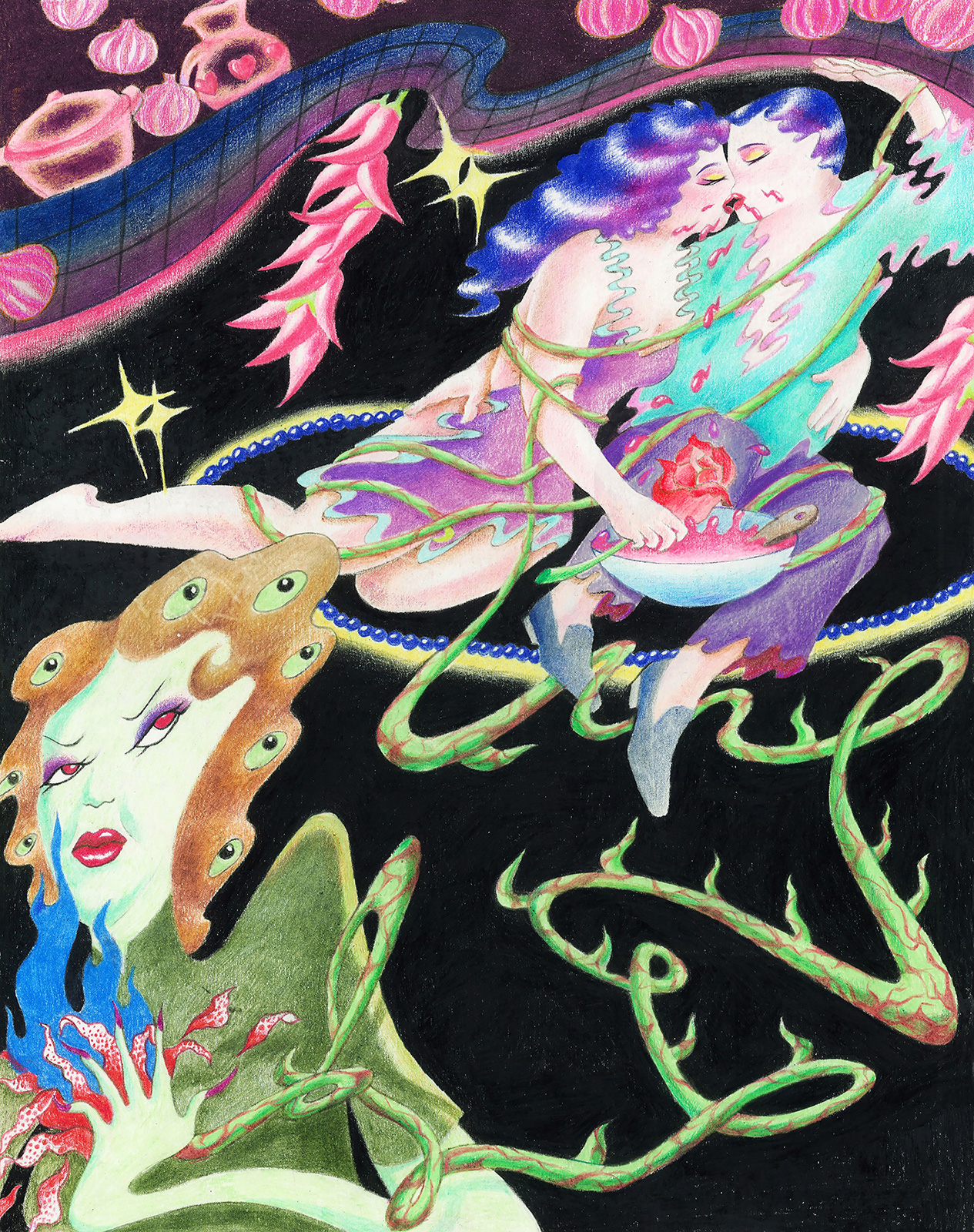 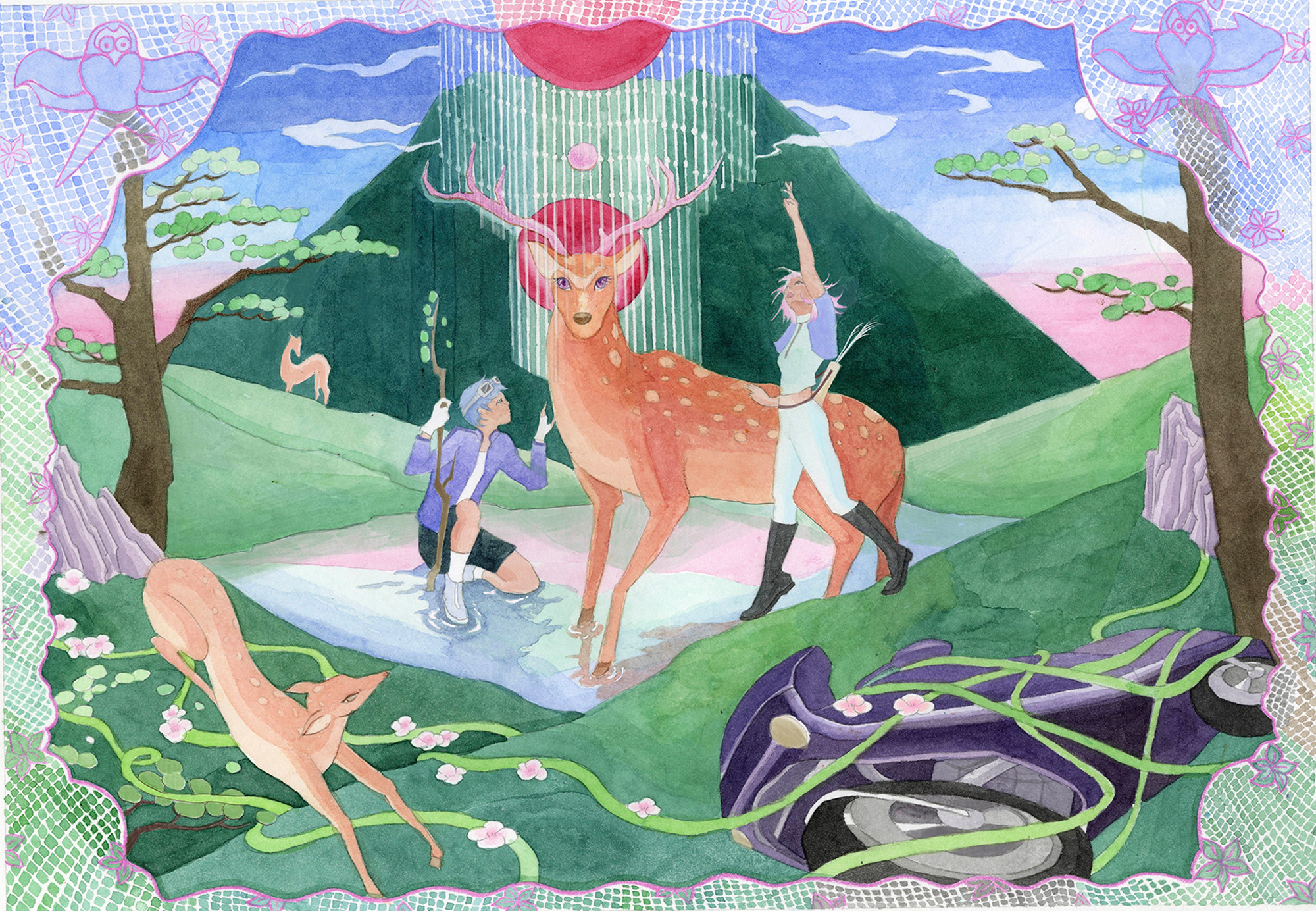