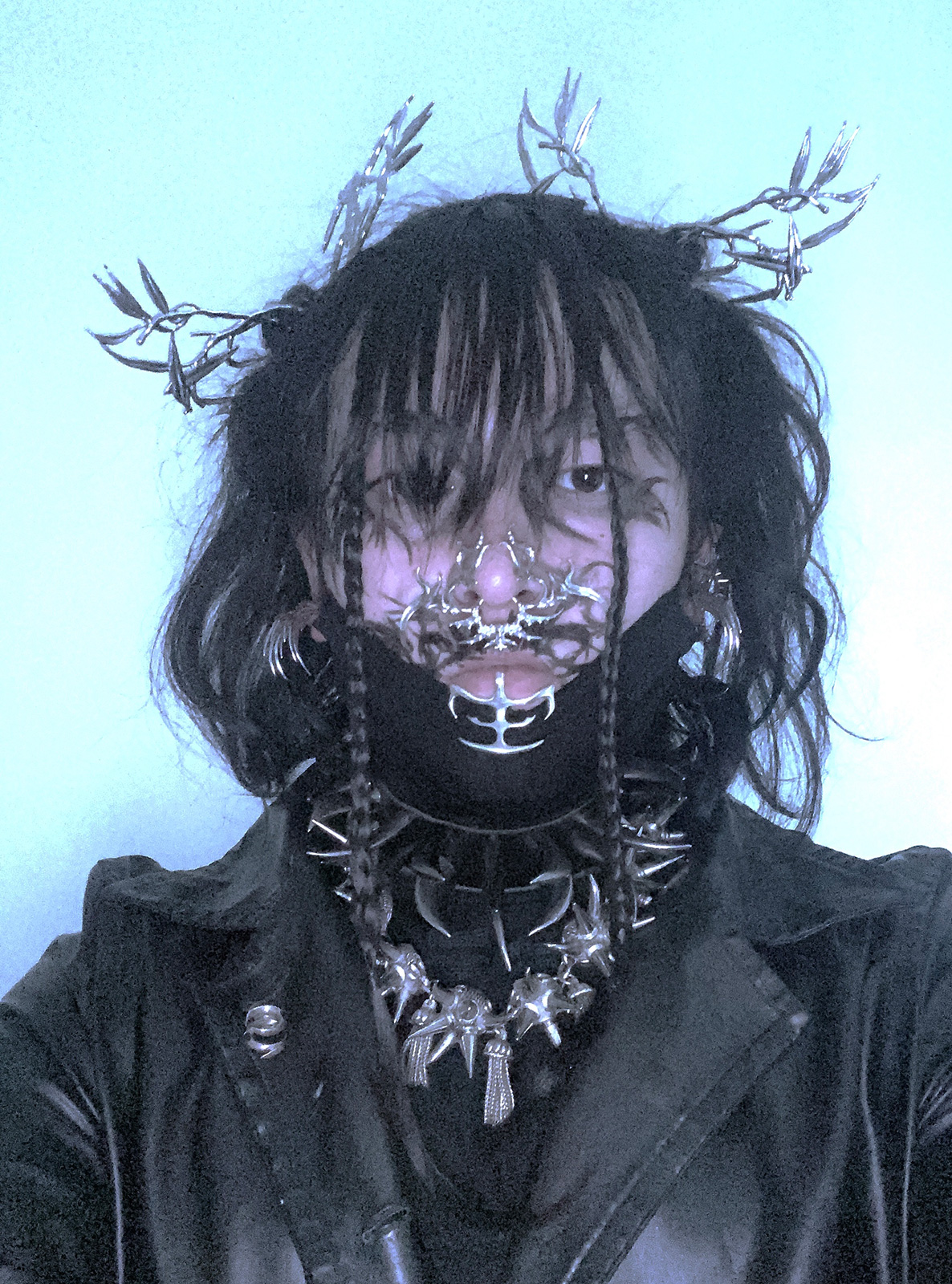 Yudai Ono transfixes the eye with ethereal silhouettes and monochrome wire experiments that pay tribute to the spirit of goth culture, Japanese monster illustrations and his own rebellious youth. Initially pursuing a fashion career in Paris, he found success as a student at Central Saint Martins. His artistry has been featured in an FKA Twigs performance; wearing his creation, in her own words, she “felt magical”. It is this element of magic that vitalises Yudai’s designs, actualising his interpretations of destruction and regeneration onto the body. Here, we talk to the designer about conceptualising new projects and finding the courage to cultivate unique artistry, channelling rebellion in the face of opposition.
Let’s begin with the start of your journey into fashion: could you tell us about your experiences growing up? How did your past shape your decision to become a creative?
I was born in Hiroshima, Japan - the only city in the world where the atomic bomb was dropped, along with Nagasaki. From an early age I grew up surrounded by various things related to destruction and regeneration. My family is not very wealthy and my home environment is not good, and I have always experienced discomfort due to the severe oppression of my parents towards my actions and thoughts, and the pressure to conform in the countryside. To put it simply, I don't perceive the ego, I feel I should act and think according to my surroundings. But despite my strong awareness of the concepts of destruction and rebirth, it was a difficult environment to adapt to. Because of this situation, I developed a rebellious spirit. I started to be conscious of creation to sublimate that feeling, and I wanted to influence both myself and the people around me with what I created. The trigger for this was fashion design, which is closely related to human beings and the environment that accompanies them
I understand you’re currently studying at Central Saint Martins; what led you there and what specifically resulted in your decision to choose fashion as a creative outlet?
After graduating from high school in Japan, I wanted to escape my environment, so I went to Paris to study fashion design. In Paris, I learnt various skills encompassing basic fashion design, such as pattern creation, knitting, printing, and textile creation.  However, my style of work was not accepted at the school, so I decided to leave and challenged myself to get into Central Saint Martins, which is accepting of a more creative style of work. The teachers kept telling me that I wouldn't pass because of the difficulty of being accepted, but my desire to rebel against such opinions served as a driving force to succeed.
The specific reason I chose fashion design is because I want to influence the world with my presence.  As I previously mentioned, fashion design is the best choice as a medium that directly interferes with the world, due to being so intimately associated with people. I support the simulation hypothesis influenced by the Copenhagen interpretation of quantum mechanics and the double-slit experiment, and I believe in the possibility of the power of human consciousness. Unlike other art fields, fashion design has the unique aspect of people wearing designs and spending their daily lives interacting with the world, so by having people wear my garments, fashion design has the potential to change the world using the wearer’s own consciousness. Therefore, my work may also be able to indirectly make a big impact on people and the planet. I want to create a movement that affects the world through both my creativity and the people who wear my designs.
When starting out, who or what inspired you? Did the ingenuity of any designer or art movement help propel you in the creative direction you’ve headed today?
When I started fashion design, I was inspired by the Japanese designers Rei Kawakubo (Comme des Garçons) and Issey Miyake.  My ultimate goal is to influence the world through my work, so I wanted a strong element that ordinary designs lack. Similar to my story, Rei Kawakubo also worked in Paris, and she continued to design according to what she wanted to express despite receiving negative feedback. Her work was gradually accepted, leading to her present day success. This situation was similar to my experience in Paris, so I was aiming to be like her. In addition, she always pursued new forms of expression, and I was greatly inspired by her respect for her own creations. As for Issey Miyake, he was trying to push fashion design into the realm of academic art, and his attitude toward creation had a great influence on me. Amongst his most striking work was the collection presented in collaboration with Cai Guo-Qiang in 1998, in which a firecracker was placed on the clothes and allowed to explode, and the gunpowder traces became the pattern on the clothes. Both designers channelled new creativity with their work and brought about fresh changes in fashion - I was greatly influenced by their ideas and designs. 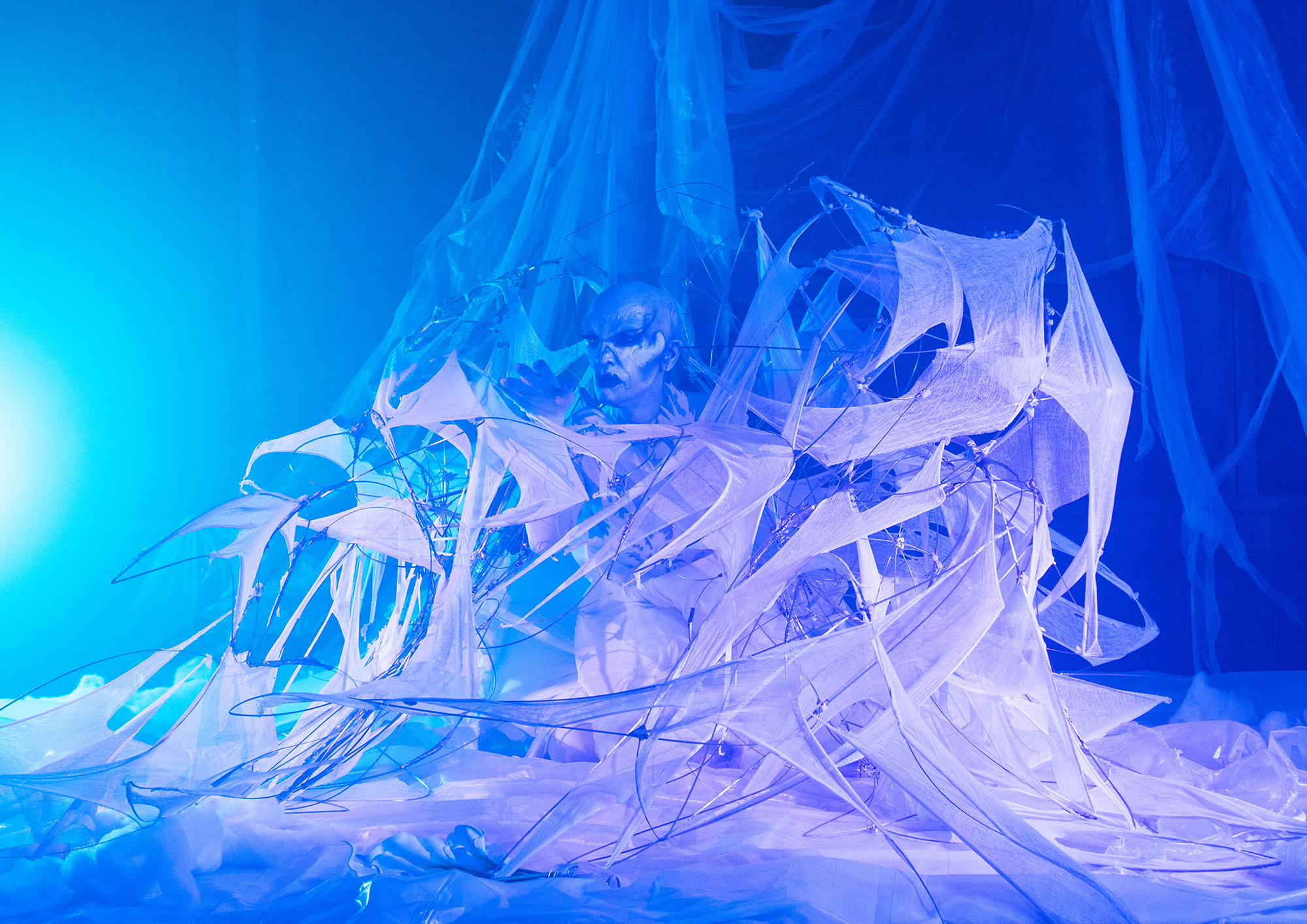 Much of your work is highly structured, and has featured experimentation with wire. Have you explored other mediums previously? How did your projects steer towards such innovative experimentation with design construction?
The starting point for my designs was making a strong piece.  As a result of that, the silhouette of my garments is of great significance. In the past, I experimented a lot with stuffing cotton in fabric and adding gathers to create large frills, but I decided to use wire  as a medium because it creates a stronger impression and is highly expressive, despite being difficult to work with. To use the fabric pieces I pattern cut, I have to find the balance between the shape of the wires and the shape of the fabric, and the relationship between the two to produce a design of high quality. It's easy to make clothes using wires and cut fabrics, but to create a strong creative expression and a well designed garment, various skills are required such as having the ability to visualise and create space, and the knowledge of how to combine the structures of each shape by utilising the characteristics of the fabric. I knew it would be a challenge, but if I could achieve it, I felt it would be possible to express new structures which did not exist in fashion. Within this process, I also found that there are more than 100 patterns that do not use sewing machines at all, so it can present entirely new design possibilities.
Your garments are monochrome, yet lavished in structural intricacy. What led to the decision to work with a black and white palette? Does colour choice feature heavily in your visual messaging, or do you choose to channel your storytelling through the anatomy of each design?
Could you tell us about the experience of having one of your garments featured in an FKA Twigs performance? How were you able to mesh the fundamental vision of your artistry with hers?
The theme of her song was Meta Angel, and I had received a request to make my own Meta Angel, inspired by the black garment I made. In the performance, I witnessed the fusion of music and fashion, and I felt the extent of the potential output of fashion design. I also knew her music attracts and influences a lot of people, so it was a great honour for my work to feature in her performance, and I was overjoyed that this fulfilled my goal of people influencing the world while wearing my garments.

Borrowing heavily from punk influences, but incorporating sophisticated structural elements that denote both angelic and demonic imagery into your garments, much of your work portrays a depiction of the ethereal punctuated with unapologetically hardcore symbolism. To what extent have you been inspired by punk subculture, and what resulted in the feature of a nod towards the divine in your work, such as through the incorporation of wings?
Rather than being directly influenced by punk, my work references ideological factors such as rebellion and destruction. The decision to incorporate many wing-like parts and structures was inspired by goth culture and Japanese subculture.  I think most of the time, many of the visuals come from Japanese subculture - specifically character design, illustrations, robots, and monsters (Kaiju). They were originally created by reinterpreting and reconstructing mythical and religious matters, so I’m also indirectly influenced.  In the world of illustration, there are many beautiful shapes and structures that do not exist in reality, so it’s a very interesting field to draw inspiration from.
When beginning a new project, how do you go about initiating design and construction? Is the initial focus on the nuances of a piece, or do you prefer to centre on a more abstract vision of the essence of a garment from the very beginning?
When starting a new project, I always ask myself, how does my design cause an impact in the context of fashion, and how can I express something new while still maintaining my own philosophy. The process of completing a garment draws upon the abstract, then arranges it with a more concrete line of thinking. I aim to realise the garment that I want to express while not deviating too far from the context of fashion design. I begin by deciding on the concept of the work and start researching in order to organise each element. Once I’ve gathered mental images, I’m able to sublimate them into new ideas, so I sketch them out for mental clarity. After I’ve decided on the general direction of the design, I conduct experiments to capture and adjust elements that I could not visualise on paper or in my head. I am always aware of keeping my creativity in line with the context of fashion design, to avoid abstracting my work into the realm of fine art sculpture.
Is there a specific message or emotion you are aiming to invoke when one views your artistry?
I hope people are strongly inspired when seeing my work, which was created to incorporate elements that differ from general fashion design - I want to bring about something different in each individual's life.
Do you have any new projects on the horizon? What’s next for you?
My next project is to incorporate structural elements into dresses or jackets, to cut deeper into the context of fashion design. I also aim to create work featuring a wider array of colours, as well as integrating new mediums. 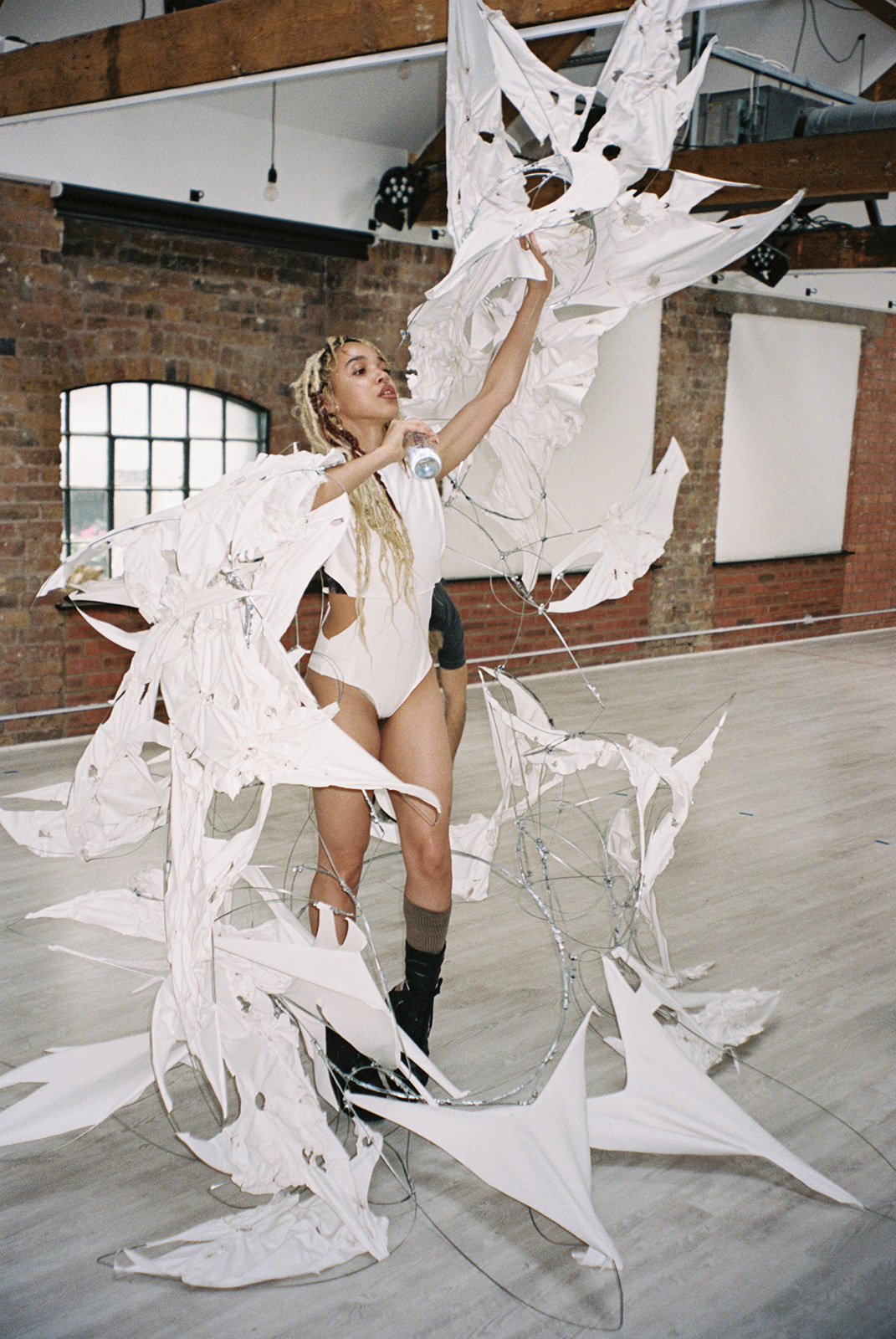 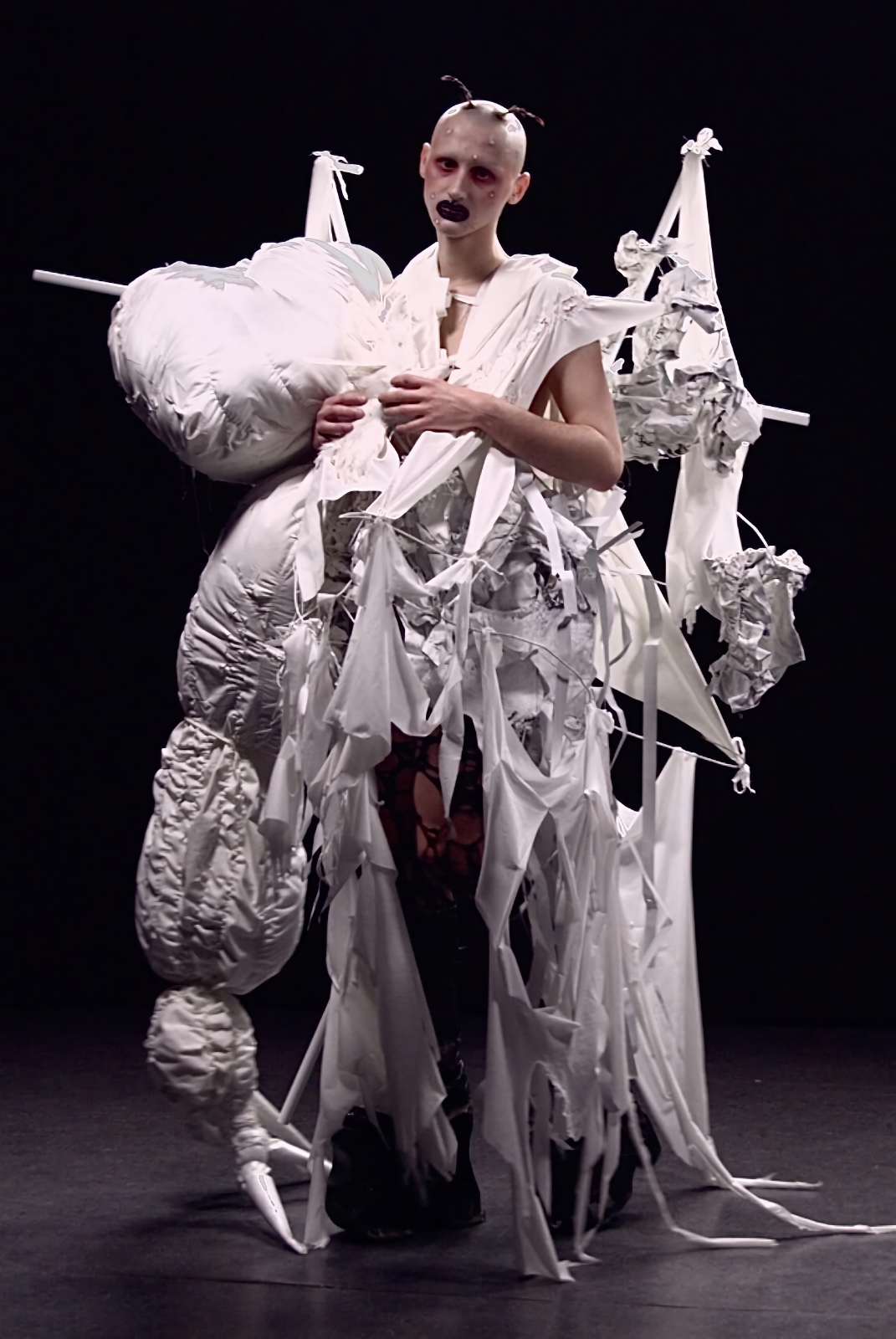 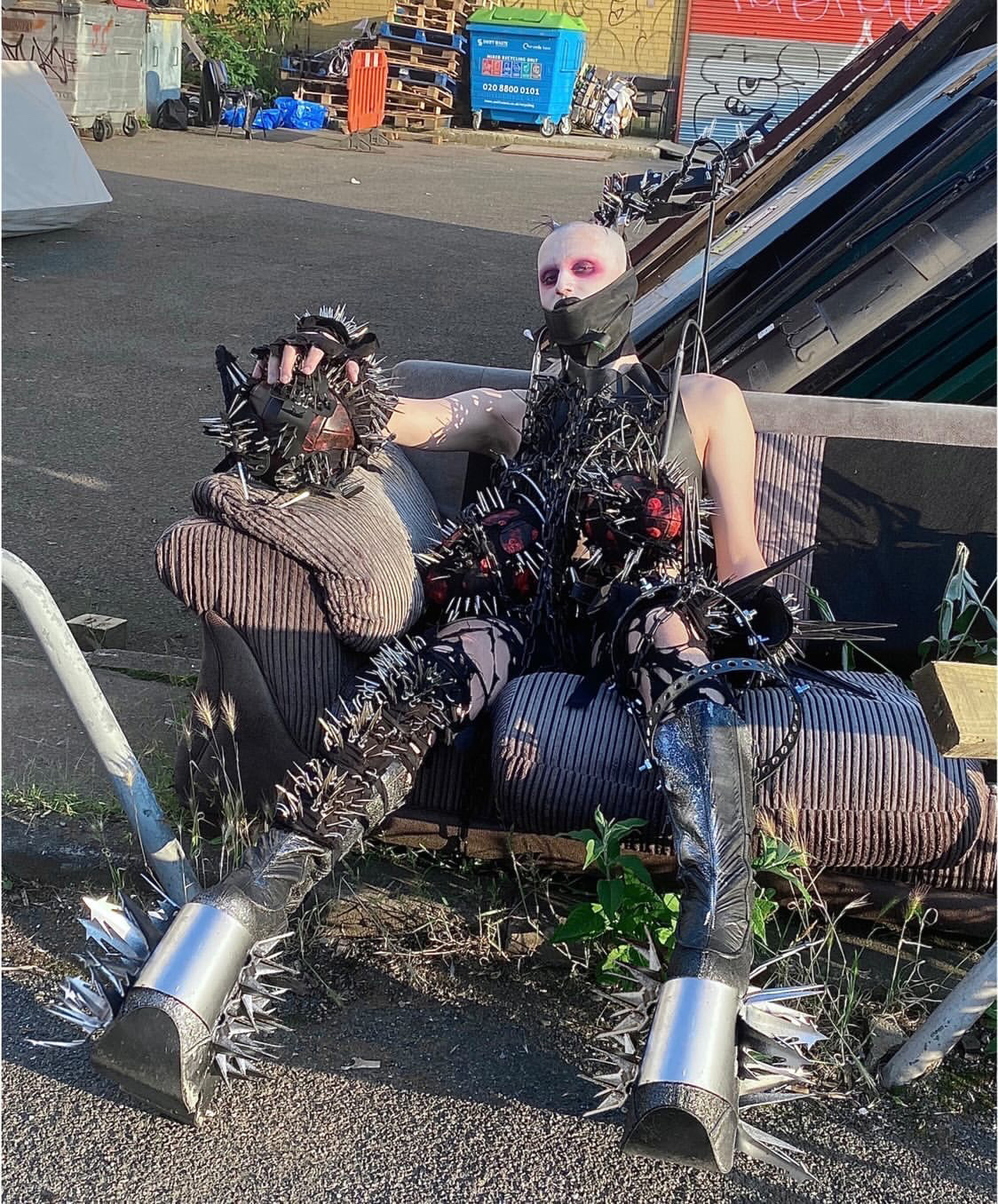 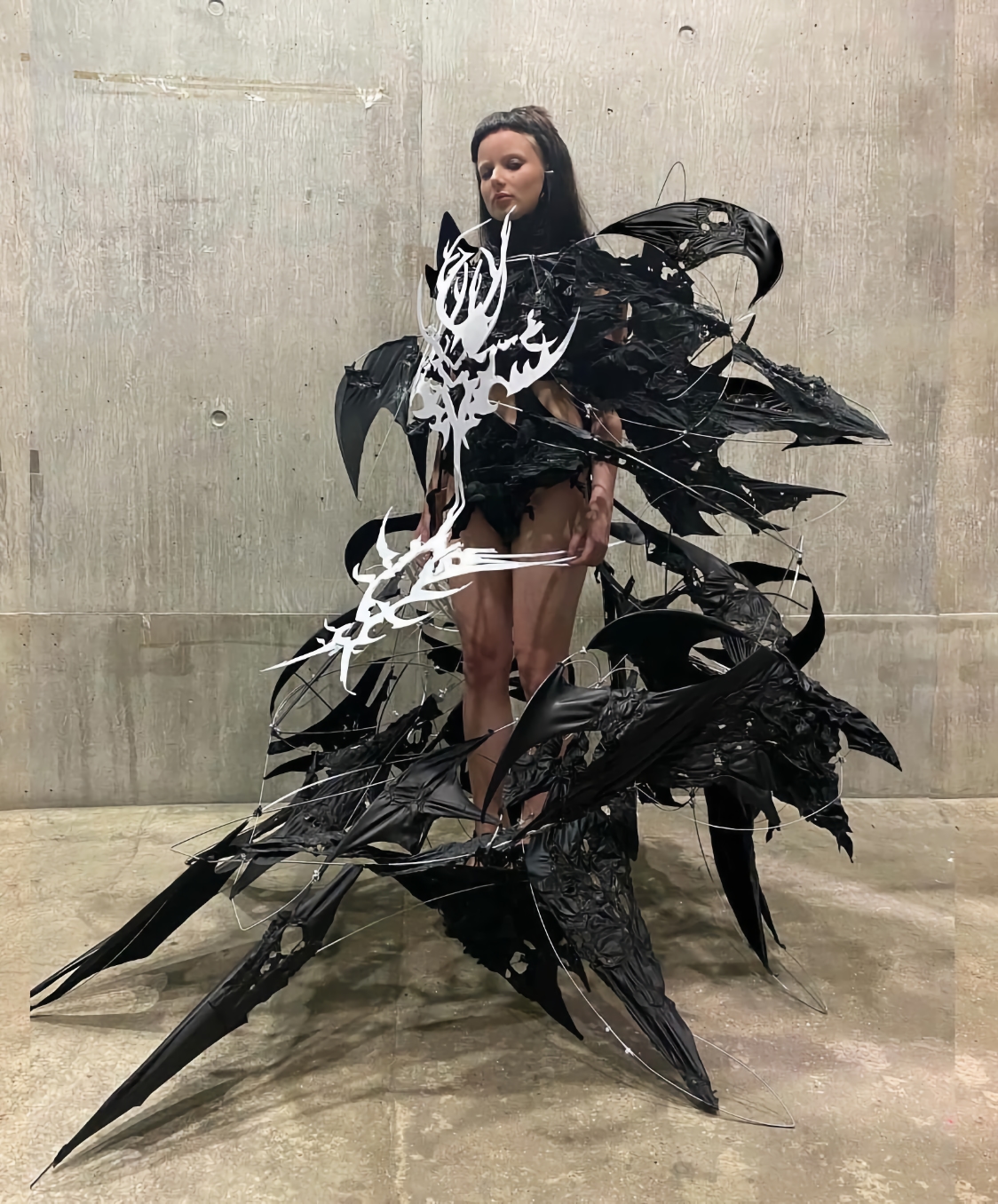 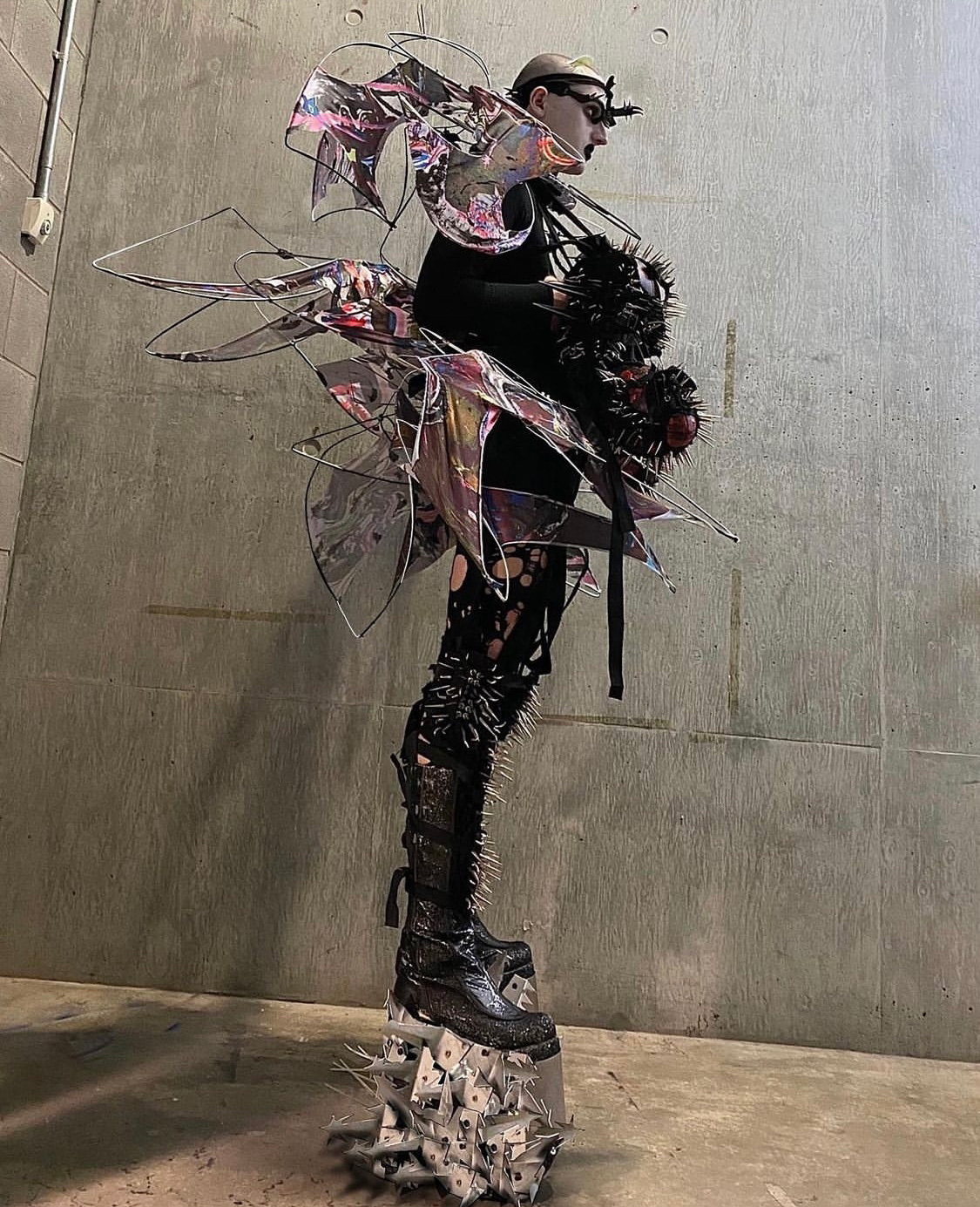 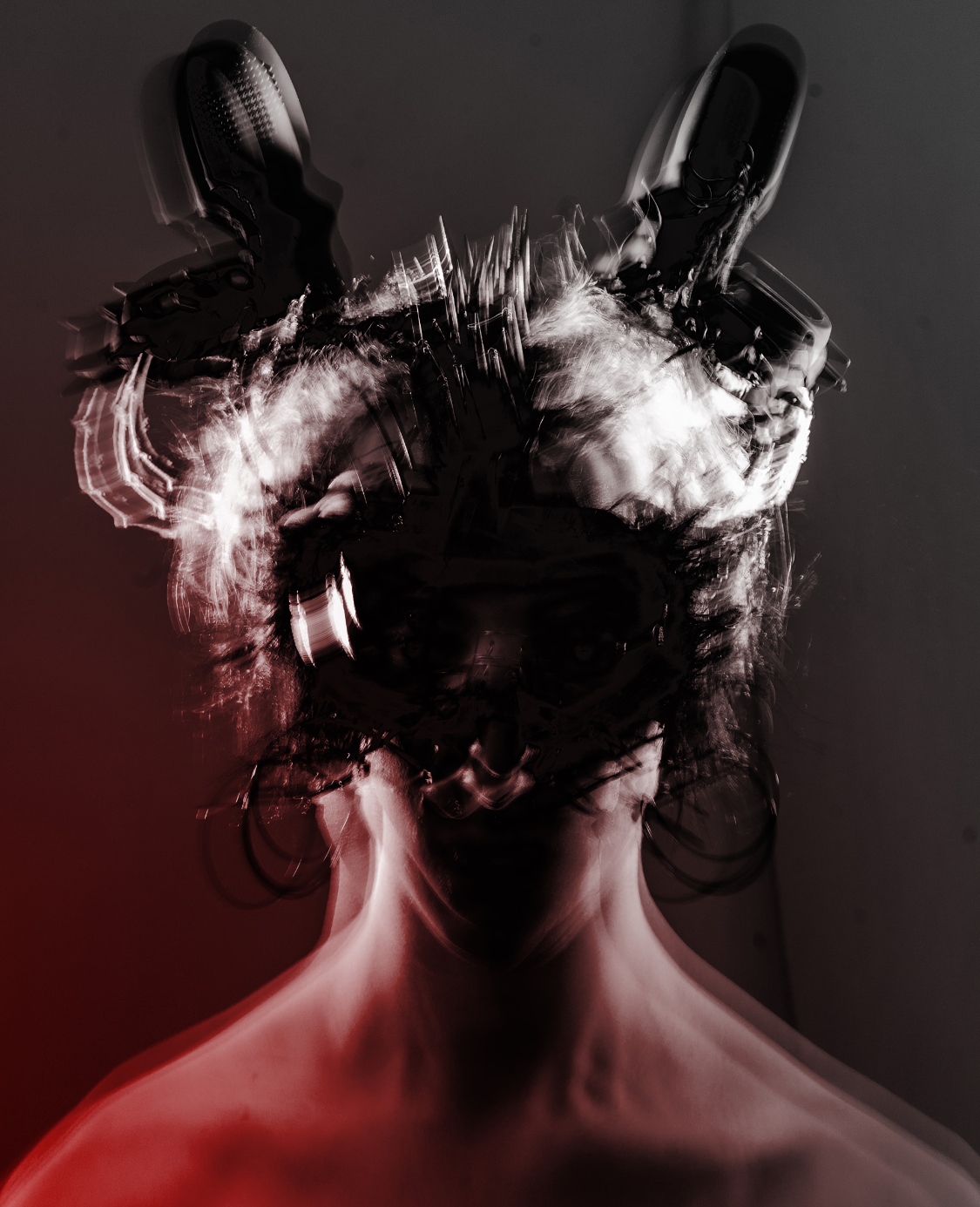