Food is art and vice versa 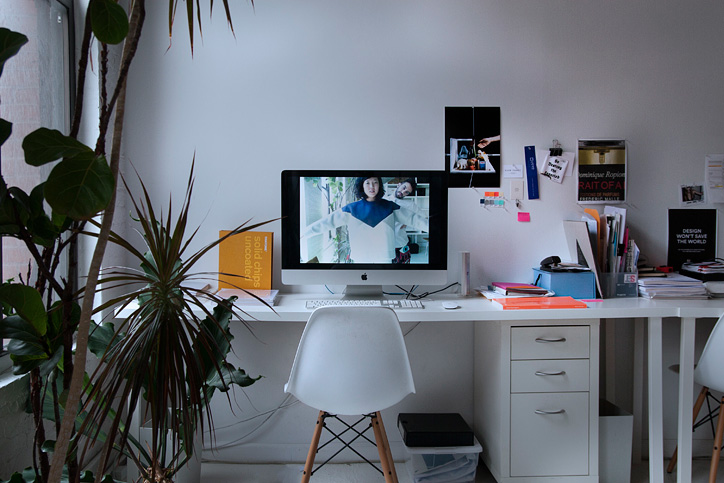 White Zinfandel is a continuation of the curatorial experiment With Projects, a multidisciplinary studio founded by Jiminie Ha in 2008, which first began as a project space/gallery in New York City. In 2011, Jiminie came up with the idea of an arts journal devoted to the visual manifestation of food culture produced within the lives of creative individuals. White Zinfandel is coupling food and art as a reliable means to provoke unexpected reactions, cravings and curiosities. And guess what? It did just right.

It’s not easy to describe White Zinfandel in a few words. Each issue has such a great story behind it that is almost hard to believe Jiminie when she says that planning every project is something sudden and organic. The first issue played homage to the restaurant FOOD. The second issue was inspired by the TV dinner. For their 3rd issue ‘Food Fights’ had artist Jean-Baptiste Bernadet create a tiled painting over all-white copies, and each person purchasing a copy received a piece of the painting. The theme for the 4th issue was ‘La Grand Bouffe’, based on the 1973 Marco Ferreri film, in which food is “the last hope hidden in the despair of living”. All these lead us to the 5th and last issue ‘Shame’, an apocalypse and a proof of pioneering thought, aesthetic, passion and creativity. And that is because the inspiration for ‘Shame’ was Francois Mitterand’s last meal. Jiminie told us all about the perfect match between food and art.

Tell me about the beginnings of White Zinfandel. How did the idea of creating such a magazine come about?

To be honest, the inception of the publication was very organic, and very unplanned. I thought the name of White Zinfandel was a terrible name for a wine varietal, but great for a publication of some sort. It was a time where I was hosting a lot of dinners at my old apartment with close friends and really enjoying the creative back and forth between one another.
White Zinfandel is all about the visual manifestation of food and culture, and each issue, no matter the theme, has been a tangible answer to the question of what happens when creative people, across disciplines and media, get asked to make art about food. Which is a fancy way of saying that the collaborators—outside of the core team of designers and editors (though even that’s shifted over time)—switch up every issue.
We also pair each issue with a launch party that follows itself that core idea—this is where we get to see the food influenced by the art, and collaborate with chefs and mixologists, who come up with a kind of conceptual dinner or cocktail party that gives the contributors and guests a chance to immerse themselves in a kind of living (and delicious) version of the magazine.

Why would you say food and art make such a great match?

Food is our common denominator, and both food and art to me feel like necessities. Regardless of your relationship with food, it’s what one requires to sustain oneself, but at the other side of the spectrum, it instills passion, obsession, and inspiration. You see throughout art history how food is integral—from traditional still life, to surrealists like Dalí creating a cookbook inspired by his favorite restaurants and chefs, or conceptual artists such as Gordon Matta Clark opening up an entire restaurant dedicated to experimental menus. Combining these two arenas wasn’t necessarily done to emulate what’s been established in the food/art world, but to explore how food itself could expand into a larger thematic territory that addresses topics on an even more abstract level.

What was the reaction of the public to White Zinfandel and how did both (artists and chefs) take the challenge of creating something together?

The only reason why it’s still going strong is that the community is so incredibly supportive of the publication and the work that we publish. With the first issue, we were just lucky enough to have great timing and amazing support from friends who helped make it happen. Chefs that I have worked with have always loved the idea of working with artists, and have taken it as an opportunity to really push the boundaries of interpreting ingredients, recipes and dishes in a highly conceptual way.
The ways in which we have artists and contributors interpret the themes is all very abstract and loose. We don't require a 1 to 1 interpretation, and actually very much enjoy when the theme begins to veer off into other conceptual tangents. We don't review restaurants or chefs, we don't really discuss the artists' favorite dishes, and it's increasingly becoming more of a limited edition art book rather than a publication. We stick to 500 copies per issue, and each issue has been in unique editions, sometimes within the theme as well. For example apart for our collaboration with Bernadet on issue #3, Davide Balula and WZ collaborated on the previous issue, La Grande Bouffe (issue #4), to have a physical bite on every cover, which required my team in Berlin to go chomp down on the magazines at the printers. It's not that that gives us some competitive edge (though some publishers might be intimidated by our bite strength), we're just doing something very different from most of what's already out there.

What is your relation to food?

I am clearly someone who is very into cooking, and a total foodie. As of late, however, I’ve been cooking more than I go out—I’ve really been enjoying the therapy of cooking.

What is your favorite cuisine?

I love everything, but really, Asian food (Thai, Korean, Japanese) is a necessity. I can’t live without it.

With what other experience would you compare the moment of tasting the first bite of your favorite food?

Do you have a favorite restaurant in NY or somewhere else in the world?

I’ve learned that hype doesn’t equal best food for me, in NY in particular (I hope this doesn’t piss off a lot of chefs). Sik gaek, a restaurant in Queens that I just recently discovered through my friends from Cali, is by far the best grilled Korean seafood spot I’ve ever been to in NY. But there are a few places that I frequent pretty often, like Hanjan, Izakayaten, Soba Totto, and Odeon. Outside of NY, I try to go to Bones in Paris, and still love Le Chateaubriand.

Any chefs that you respect a lot?

I think all those former chefs from Au Passage are very talented. James Henry from Bones has unforgettable menus whenever I go, and I remember my first meal at le Chateaubriand like it was yesterday, so Inaki’s on the list. Ignacio Mattos at Estela (in NYC), is probably one of the best chefs out there in the city. He was an amazing collaborator as well.

What is your relation to art?

I grew up right outside of Paris, and my mother studied fashion for some time. Both of my parents, actually, even though they weren’t professionally linked to art, were both very passionate about the arts. That said, they were very against the idea of my pursuing art when I went to Brown, which is how I ended up being an international relations major. But I think it was unavoidable—I don’t think they realized how much they exposed both me and my brother to the fine arts, design and architecture. My brother also decided against law school and became an architect. My parents would take us weekend road trips to the small villages where deceased artists grew up all the time as kids, despite our protests. And just aesthetically, my mother was really a huge inspiration—she is probably one of the most intuitive women I know, with an incredible eye and ability to make beautiful work regardless of the medium.

Each issue has a different concept. Do you really plan this or it just occurs to you?

It really is organic, and really just happens suddenly. There is no rhyme or reason, but somehow it always happens to be very timely.

Would you talk to me about the wonderful stories hiding in the pages of your fifth issue, "Shame"?

We decided to go with ‘Shame’ as the theme of this latest issue, and especially the sense of food shame that we found distilled in the story of Francois Mitterand’s last meal. Knowing he was dying, the former French President decided he would eat the rare and illegal delicacy, the ortolan, a tiny French songbird eaten almost to extinction. The captured ortolan is force-fed millet, drowned in armagnac, plucked, and stripped of its feet and a few other tiny parts. Once roasted, the diner takes the bird whole into their mouth, and covers their head with a napkin to "shield your shame from God." There's a lot going on there, but the shame-hiding napkin, in particular, inspired us to fold the smaller pages into the issue, as little napkins that the reader has to move to show the Shame-inspired art.
And the theme persists throughout the issue's design. The cover of the issue actually blushes, turning from white to pink when exposed to sunlight thanks to some fancy UV-sensitive ink. And the issue was typeset in a font called Joanna, which Eric Gill named after his daughter—a fact that only starts to bring the heat into your cheeks when you look into Gill's history, and realize that the famous sculptor and typographer was also a notorious creep who kept detailed notes on his sexual abuse of his children, incest with his sister, and even sex with his dog in his personal diaries.

What is to wait for the next issue? Can you give us a hint?

Can’t! But will come out early spring. If we don’t run into another weird production issue! 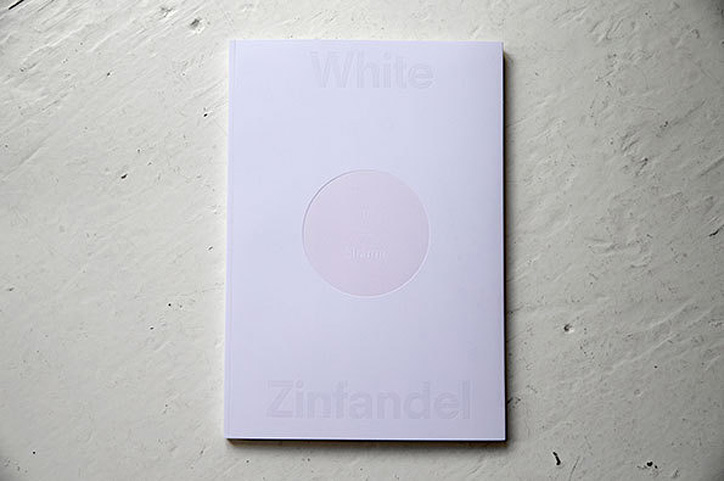 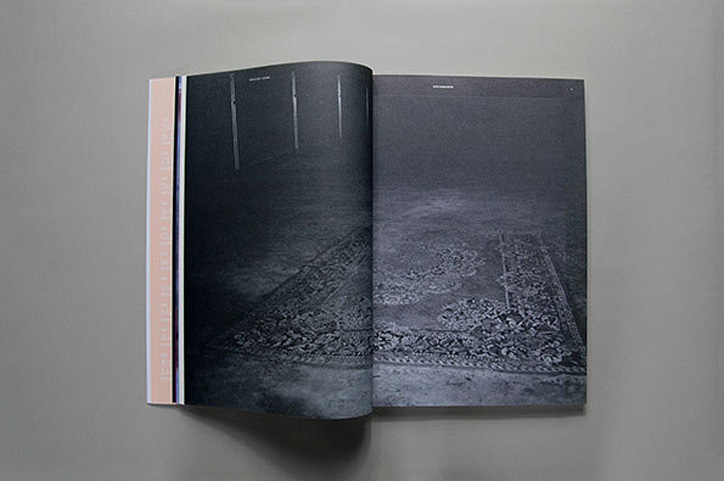 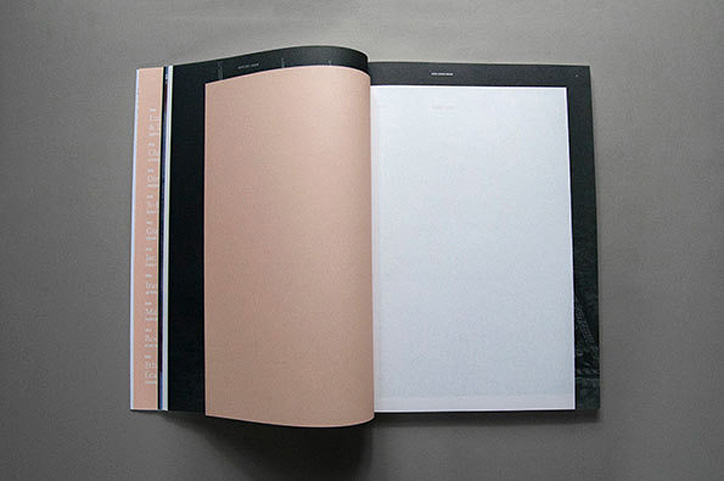 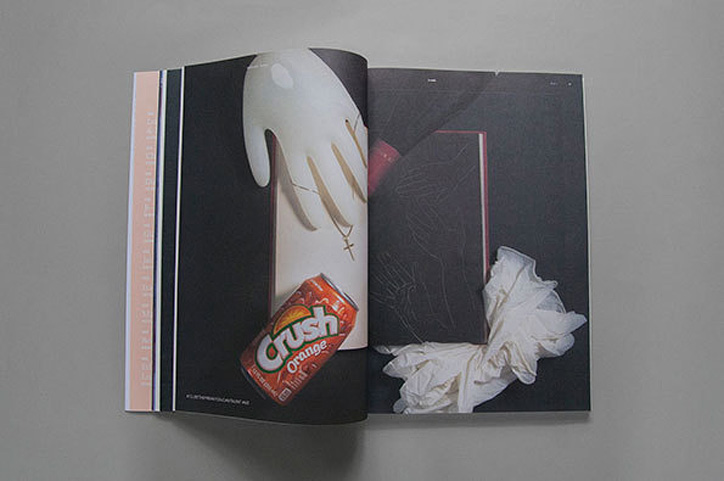 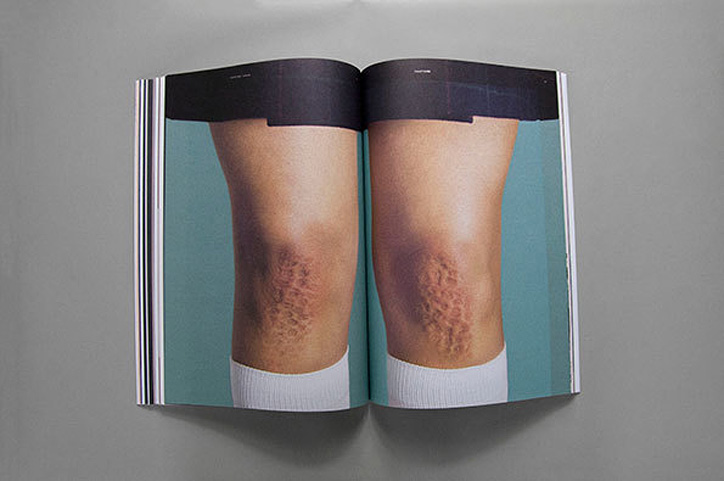 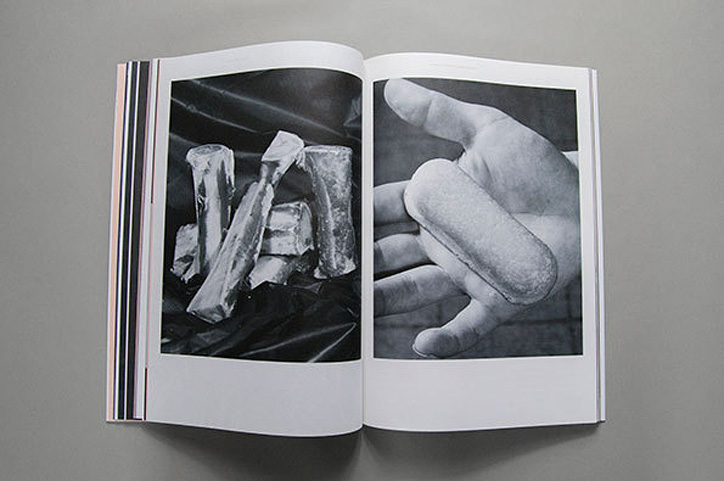