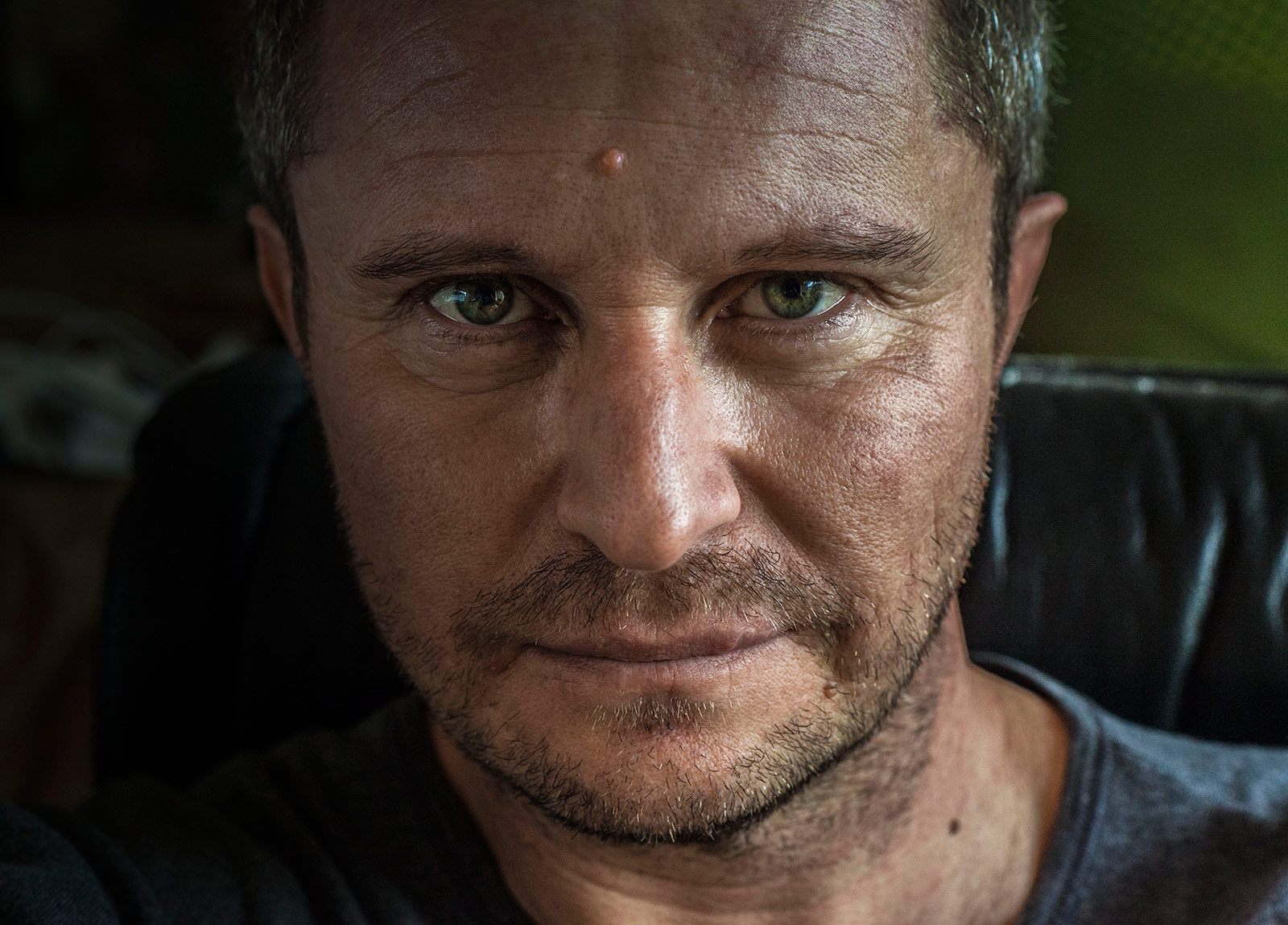 When trying to convey an important message, it’s incredibly useful to have a common tongue, and perhaps even more so – a common sense of taste with your audience. So how can you ensure that intimate, personal, often uncomfortable experiences are truly understood? According to Berlin-based director Vadim Perelman, co-creator of the internationally-acclaimed drama Persian Lessons – with sincerity, and a bit of comedy.

What film affected you the most as an artist and as a person?
Bicycle Thieves by Vittorio De Sica. I think it’s incredibly powerful. I believe it’s perfect, it’s exceptional in terms of emotion – the simplicity of it is wonderful.
Why are films about the Holocaust period so important, even now?
I think it’s a topic that we should never forget, something we cannot just sweep under the rug. And there’s no way to soften it. I think that we need to keep telling those stories over and over again to prevent them from happening again. I hope it never will.
Has the reception of Persian Lessons been different in Germany than in any other countries? If so, in what way?
Well, so far we’ve actually only had a theatrical release in Germany. So, it’s hard to compare to other countries but in Germany, it’s been wonderful. I think it did really well at the box office. I think Germans really liked it. It was really loved at the Berlin Film Festival.
Recently, Taika Waititi opened up an interesting discussion with his film Jojo Rabbit, and especially with the opinion that a figure such as Hitler doesn’t deserve extensive research for the sake of an accurate depiction. What’s your opinion on the matter?
I think if you’re making a documentary about World War II and about Hitler, you should be quite accurate in how you depict him. As a matter of fact, you probably aren’t even allowed to express your personal opinion if you’re making a documentary film. Your job is to present it the way it was. But in the case of narrative film, or if it’s artistic in some way, I think you can present them the way you want. It’s all up to you. You can depict him as a dog and call him Hitler and set the story in 1984 if you want to, it would be the type of story with a fascist dog government. 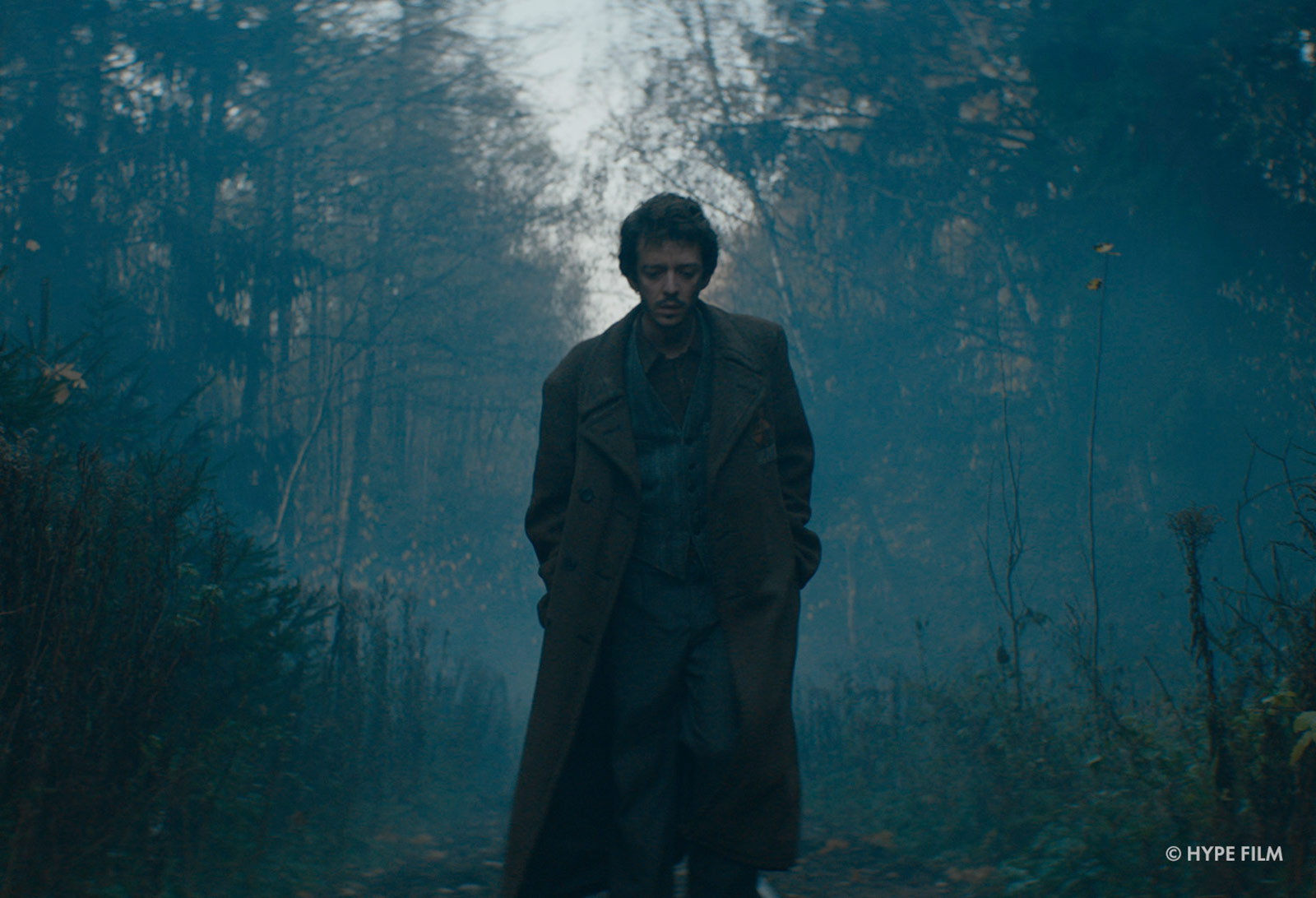 As someone with Jewish heritage – and generally as a person – what do you think about parodic or satirical depictions of the Holocaust?
I think they’re fine for the same reason. I think that would be the same answer as the one I gave for the previous question. As I’ve said before, I think those are stories that should be told. But the way you tell them and how exactly you get through to the viewer or reader is really up to you. And the viewer or the reader is the one who decides if the way the story has been told is acceptable for them. So if you want to make an opera about the Holocaust, and if it’s done well, I will definitely go and see it. I’ve seen cartoons and comedies on the topic, you know, satirical comedies, such as Jojo Rabbit. I think any sort of genre, any kind of presentation, is okay as long as the message is conveyed.
The film was originally written in Russian, then translated. How did you go about that?
Well, I sat down at my computer and translated it. Originally I took the Russian script so I could work with Western actors and the possible investors and so on… I wanted to translate it into English. So, I sat down and translated it into English.
Why focus on the theme of language, and why Farsi specifically?
The only reason we were using Farsi was that the story that it was based on had Farsi in it. So, it wasn’t any sort of conscious choice. It might as well have been Hindi, or Sanskrit, or Japanese. It didn’t really matter that much but what did matter was the theme of language. I think it’s very important because, for me, language means communication and identity. And the protagonist had to change his identity in order to survive. He changed himself. And it really weighed on him throughout the story. The fact he was a fraud. Even if he survived, he still felt he was a liar, like somebody who is not true to himself and, more importantly, his fellow prisoners.
But also, I think that language really helps to make Koch look more human in this case, not in a positive way, not as in “Oh he’s so nice, Nazis are just like us”. But how can we really say that they ‘could be’ just like us – they were just like us. And they committed those heinous horrible acts, and we could have as well. It makes us condemn them even more. 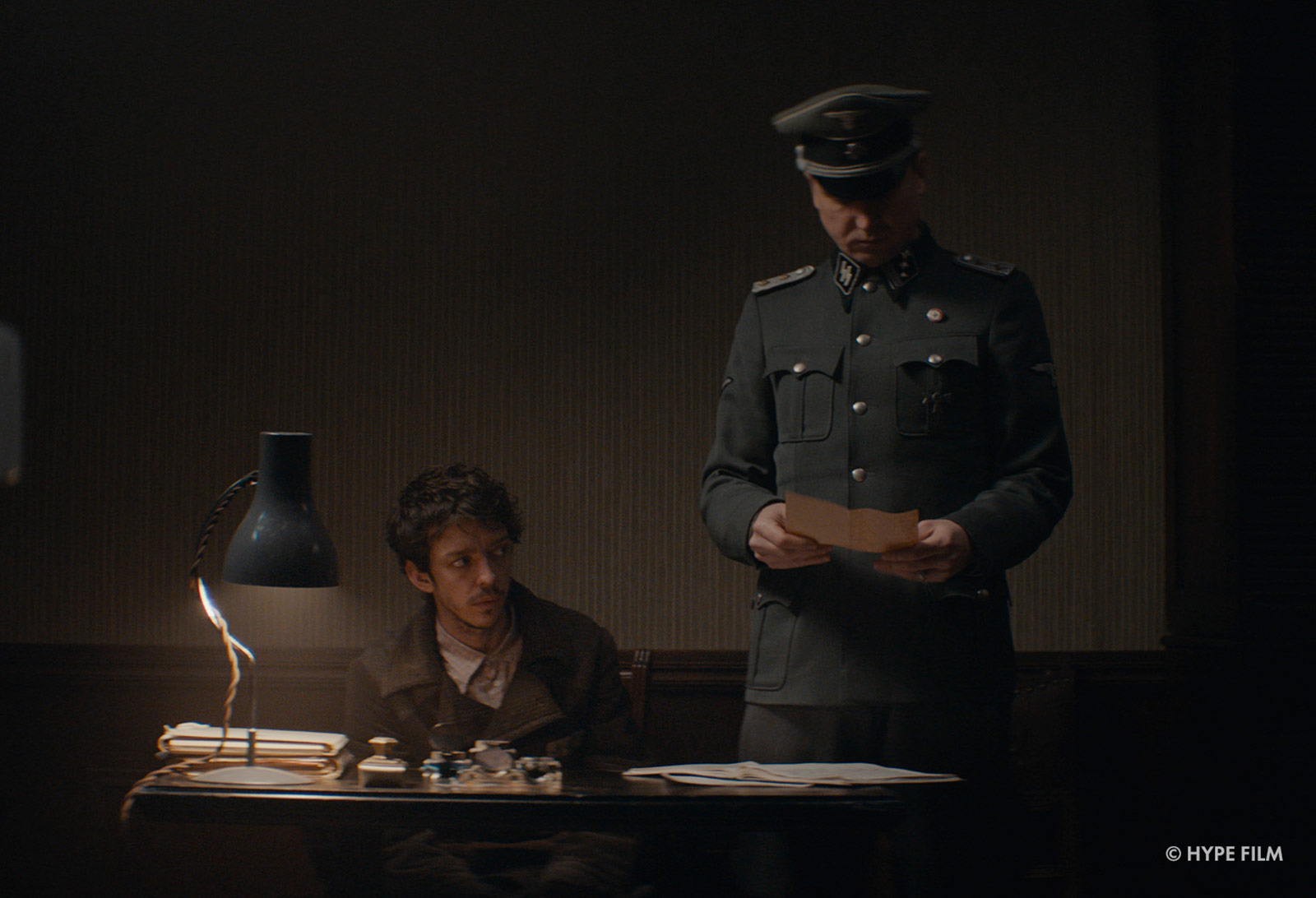 The Farsi in the film is ‘fake.’ How did you go about developing a fake version of an existing language in a way that also fits the narrative of the film?
I remember we needed a language, so we found a philology professor at Moscow State University and hired him to do that for us. Basically, his task was to invent an Indo-Iranic-sounding language that had correct grammatical forms, suffixes, prefixes, that would look natural with real Jewish names, for I chose the names of actual Holocaust victims from France, because the camp was located there. And he took parts of the names, and made a beautiful language which we still have a dictionary of, I believe. And there is still a long list of those names, and they are all very well-thought-out.
In your experience, what are the unique challenges of making art as an immigrant, foreigner, or any other sort of ‘outsider?'
I don’t think there are any, to be honest. I even think there are benefits because you have a different view on the ‘majority’ world, which makes you think in a more dynamic and flexible way, and I believe it’s quite important. And it really helps. It’s not a challenge, it’s a bonus if you are an immigrant, a foreigner, or an outsider.
With so-called ‘outsiders’ – ethnic, linguistic, sexual minorities – the approach to art and representation is often ‘at least let us write our tragedies’. Have you encountered any similar attitudes? When do you think this will change?
I think that it’s a very good point and I believe every minority group goes through that at some point until they are assimilated or stop being a minority group. I mean, Americans of Italian origin were always depicted as criminals and mafia, thugs and so on. Then it kind of stopped, I think. Now it has to run its course through a new society, as a new minority, let’s say, Mexican migrant workers. They have to go through this process, they have to tell their tales of war, they have to tell the world about how they suffered and struggled and so on. And that’s how it works for everybody. Dickens wrote about the poor people in England. And then, once we’ve normalised that existence to a certain extent, I think we can talk about more positive experiences. 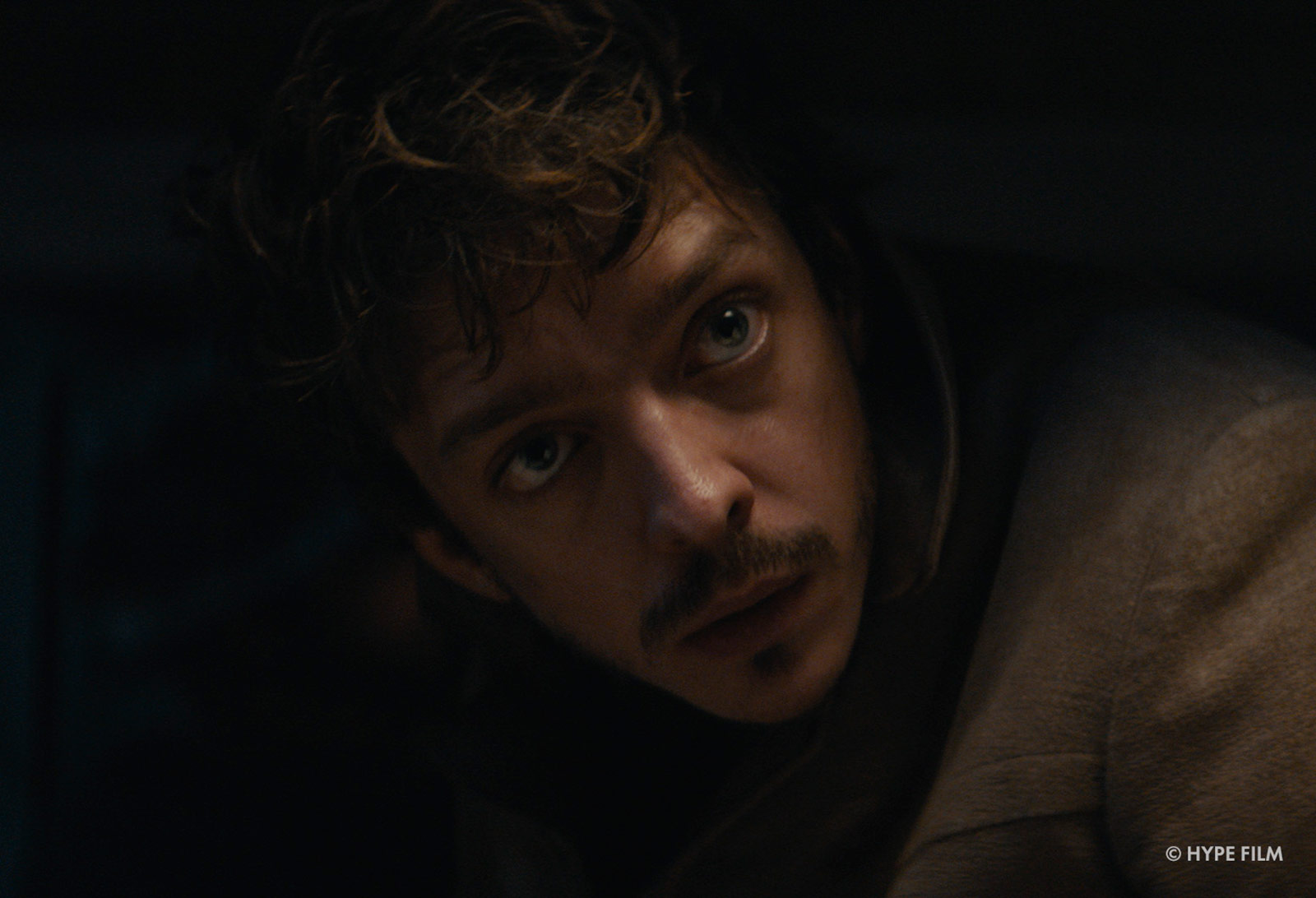 It’s said that ‘in every great tragedy, there is a bit of comedy and vice versa.’ Would you agree?
I totally agree and believe you need that in order to offset the tragedy and the seriousness of the topic. And it’s also a way to get the viewer to accept it more willingly. It takes comedy to show just how tragic some things are. It’s always good to add a tad of sugar to a salty dish. It just makes it ‘taste’ better, for otherwise, it would sound too one-dimensional and too self-important, I believe.
What compelled you to cast Nahuel Pérez Biscayart in the lead role? In general, what makes someone ‘right’ for a role?
Being right for the role depends 100% on my personal point of view. I feel that this is the person that I see playing this role. There is really no science to it whatsoever, because it’s different every single time for every single role. It feels wonderful when it turns out I was right. At that point and in that case, I think I was right because Nahuel did an amazing job and was a perfect fit for this role. And for me it was a no-brainer, you know, to cast him, this decision was really easy to make. It was very curious how I found him because he came through various casting directors. I hadn’t known him before I started casting for this film, and finally, I saw him acting. It was a very easy decision. And as for Lars Eidinger, it was just as easy as it was with Nahuel, maybe even easier.
What have you taken away from the experience of making and releasing this film, and what do you hope your viewers will take away from watching it?
I always take away the fact that filmmaking is a really tough job. That’s one of my takeaways – it takes a lot of effort, and I have to give it a lot of my soul, and work really hard, not to mention the immigrant hardships. And I hope my viewers will be empathetic and understanding towards another human being, even if it is an aggressor or a murderer. I hope they understand that we have to treat each other a little better. 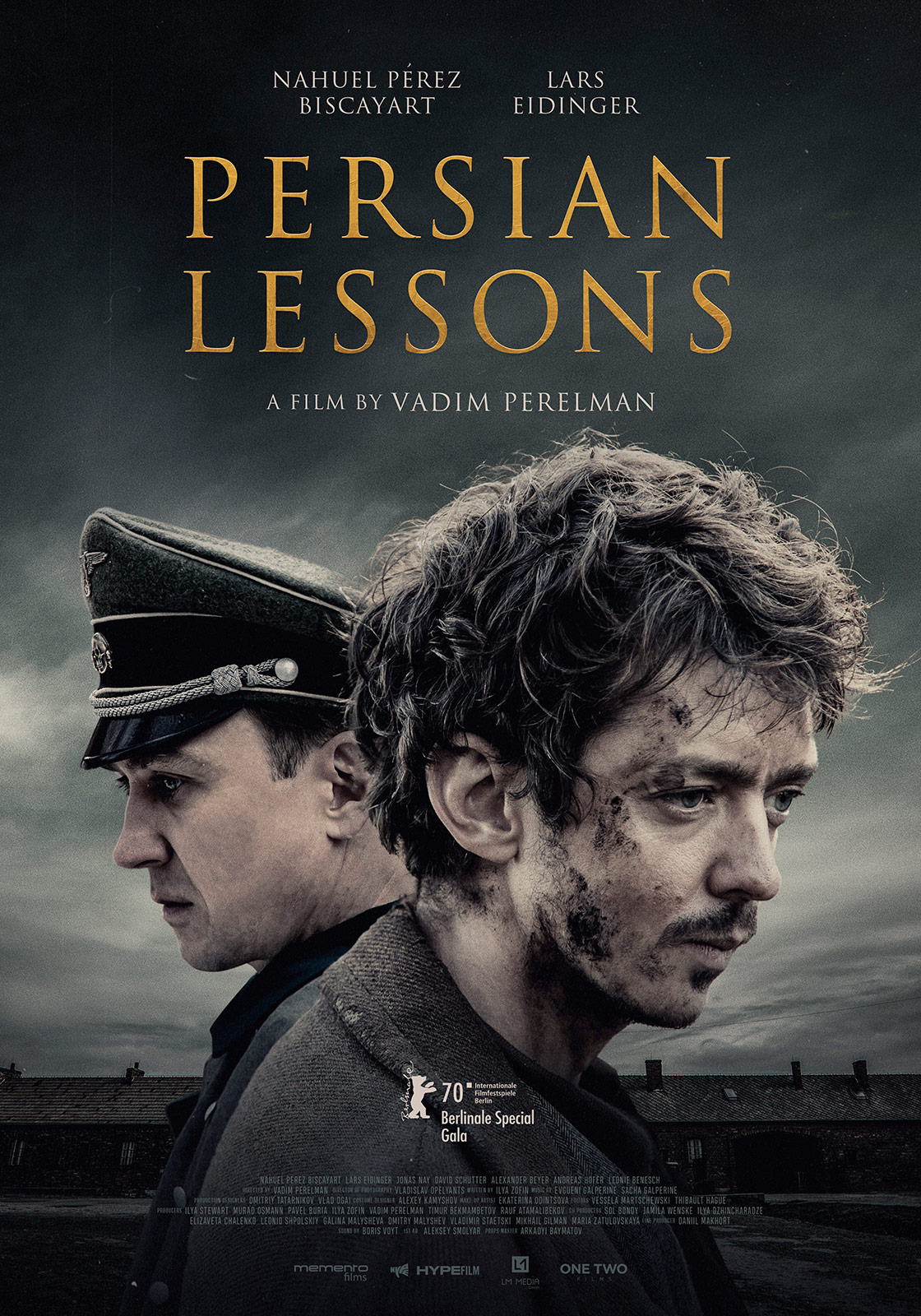