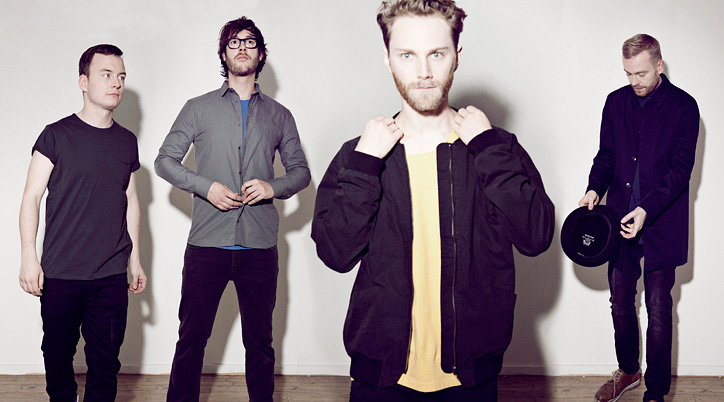 The Danish music is rightfully considered one of the oldest in Europe - up to the XII century the bearers of folk music were skalds who served in the courts of cynings and geglers - strolling musicians. Over the centuries the artists of the heroic epos have chosen the path of classics and conservatism, and the strolling musicians continued their search in the underground space of clubs' and festivals' all-absorbing atmosphere - they are fortunately aplenty in Denmark. The band we want to tell you about today is the real habitué of music festivals and, perhaps, one of the brightest representatives of the Danish music of the new decade, "a synth pop/disco rock-whatever band". It is Turboweekend.

Best Danish Live Act, Innovator Of The Year, Best Danish Act are just a few of the awards which are listed in the record of the group. In 2007, Turboweekend dropped the Night Shift album for which they were nominated for Newcomer of the Year in the two biggest award shows in Denmark (P3 Gold and Zulu Awards). Then, in 2010, the Ghost Of A Chance album followed, and in 2012 it was the no less successful Fault Lines. In February the guys were on the Frost Festival stage, and presented the tracks from the new upcoming album in the low-key environment. Martin Øhlers Petersen, Silas Bjerregaard, Morten Køie and Anders Stig Mølle will soon gladden their fans with another performance at the SPOT and NorthSide Festivals in Aarhus. Don’t say we didn’t warn you! Turboweekend's performance is one you don’t want to miss.

Turboweekend combines its art with electronic music, versions full of allusions, dense guitar sounds from time to time, and at times, some vigorous dance rhythms.

Martin: We knew each other almost since kindergarten, we met with Silas at the age of 10, at 14 we started playing, and in 2006 Turboweekend was created. We have long experimented with style and sound - from grunge and rock to soul and hip-hop. Simply put, we were white guys who tried to play black music.
Anders: When you play on the keyboard people automatically define the genre as electronic music. However, this is not always so.
Morten: We also have the drum-machines, and we also use the typical rock-and-roll instruments, such as guitars and drums.I would say that our music is on the border of pop and rock styles, - summed Silas. Some songs are 100 % rock, others are definitely pop.

The love for music of all members originated in early childhood.

Martin: My father was a guitarist, he often took me with him to live auditions, but my special attention was drawn to drum set. Since then and to this day I do not cheat the drums.
Silas: My brother played in a band. Probably that was why I had a desire to play in a group. We've always played music, my father often played the guitar, clarinet, harp, in a word, the creative atmosphere always reigned in the house.
Morten: The music you listen to during your adolescence determines your vision later, ignites your inner fire and sets the creative direction.

Among the heroes and instigators of the Danish quartet are legends such as The Cure, David Bowie, Metallica, Nirvana, The Doors, Jimmie Hendrix.

Anders: However, we listen with pleasure to contemporary music, in particular, Danish, Oh Land, Sleep Party People.
Morten: There are many really cool bands in Denmark at the moment- Mo, Baby in Vain, Quadron, and our good friends - the guys from WhenSaints Go Machine.
Anders: Twenty years ago, we had at least 2-3 groups that had been successful in the West. Now the situation has radically changed.
Silas: Music has become better, if I may say so. Compared to Sweden and Denmark, for example, there are more non-pop, underground bands. Fortunately, we do not have either Max Martin, or Abba.

The guys from Turboweekend do not consider the new groups as competitors, quite the contrary, they are quite in favor and very much disposed to support them. They have already occupied their niche in the Danish scene. And that all the tickets have been sold out in advance for two performances in one same evening is a direct confirmation of it.

Silas: Before the performance I like to be alone for a few minutes, to set my heart on.
Martin: Also, we usually overrun the track list, recall the obligatory nuances and things-not-worth-to-do. And if you make a mistake, it is no big deal. You can play twice so that nobody notices it.
Anders: Usually in such situations we just smile and wave. (Laughing)
Silas: If you work in this industry you have to be fully focused and ready for anything. Of course, you can’t be a genius every day and constantly give great music and heartfelt lyrics.
Morten: But you have to make sure you’ve made an effort every single day, instead of sitting down and waiting for inspiration to come and visit.

Anders: It is in every passing day, new impressions and emotions.
Silas:Inspiration - this is how you perceive the world around. And it can be anything - a conversation with an interesting person, change of scenery outside the tour bus window or a line you read in a book.

Judging by how much the guys from Turboweekend read during the breaks and while on tour they will have enough lines for inspiration for at least another four successful albums. See you at the festival!