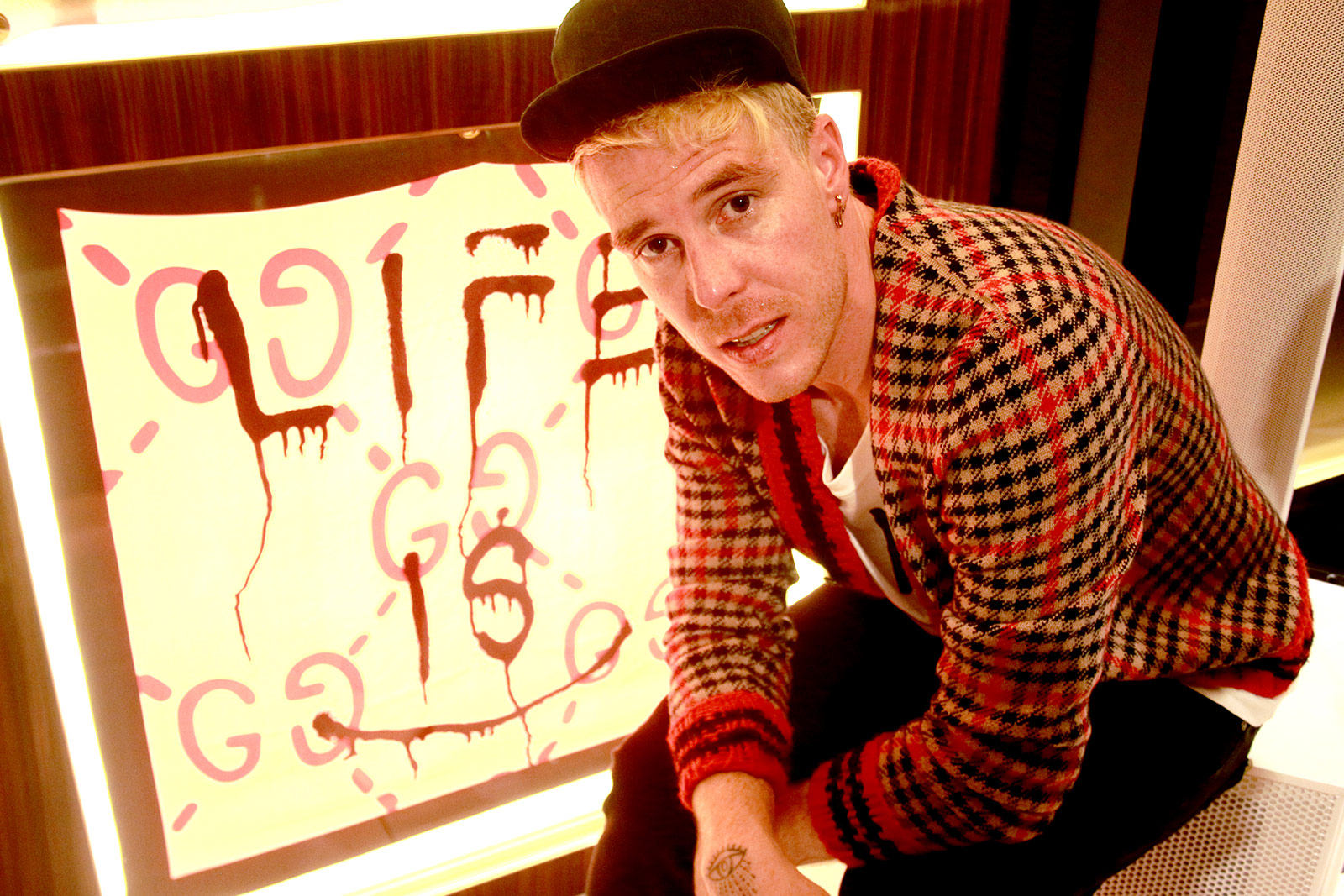 Many people try their best to get noticed by their favourite brand(s). Social media nowadays allows a broad reach to actually create a platform and be able to achieve this. However, it is very rare that a fan gets noticed as a potential business partner. With a deep love for Gucci from a young age, and by accidentally creating the alter ego GucciGhost, artist Trouble Andrew shows that, whatever you do in life, you should believe in yourself for your dreams to come true.
You bought your first Gucci watch at the age of 17 with the money you had earned from being an Olympic snowboarder. How did your love for and interest in the brand Gucci start?
That experience was based off me having money for the first time and being able to treat myself. I think that, being somewhat of an outsider and not being exposed to luxury brands as a kid, Gucci was the brand that spoke to me the most, because it just has so much power. If I think just about the word itself, to me Gucci represents greatness, and that’s why I say, “life is Gucci, life is great.” It’s interesting that a brand can have so much power and effect on people that just in our own way of speaking you could say that, and somebody would understand what you mean. And then the guys that I saw wearing it… it was just the brand that I knew about without knowing about, you know what I mean? For me, it was the ability to get something that I could wear to be proud of and to reward myself for my work, so I think that from there I just always try to revisit this memory – to have something that represents success for me.
The GucciGhost alter ego was born when you cut holes in your Gucci bed sheets to create a last-minute costume for Halloween. When did you know that this project could grow into something bigger?
I think that it started by experiencing how people reacted to what I was creating. Whether it was paintings, homemade clothing, a short film or music, whatever it was, I was just pushing this idea and I enjoyed noticing how it affected people in the same way. You can walk through a city that’s completely covered in graffiti, but if you see a GucciGhost on the wall, it would grab your attention. I just noticed that it made people curious, whether it was on social media or in real life, it made them interested, and I enjoyed that, so I kind of kept pushing the idea and expanding. I basically transformed my life and my surroundings into this Gucci thing where I was trying to put out positive vibes and create – because I always felt like it.
I started doing this and applying it to paper bags, a trashcan, or a jacket that I ripped apart, sowed up and painted. It’s like it was just fun to me –which it is–, but I always felt like it would apply and it would just take the right person to see it. Everybody was always saying, “you’re crazy, it’s never going to happen,” but I just kept on doing it, because I loved to do it. It was a fun art project, but in the back of my mind I believed so much in it that I made it real, and luckily the stars were aligned: creative director of Gucci Alessandro Michele discovered it and understood exactly what I was saying. 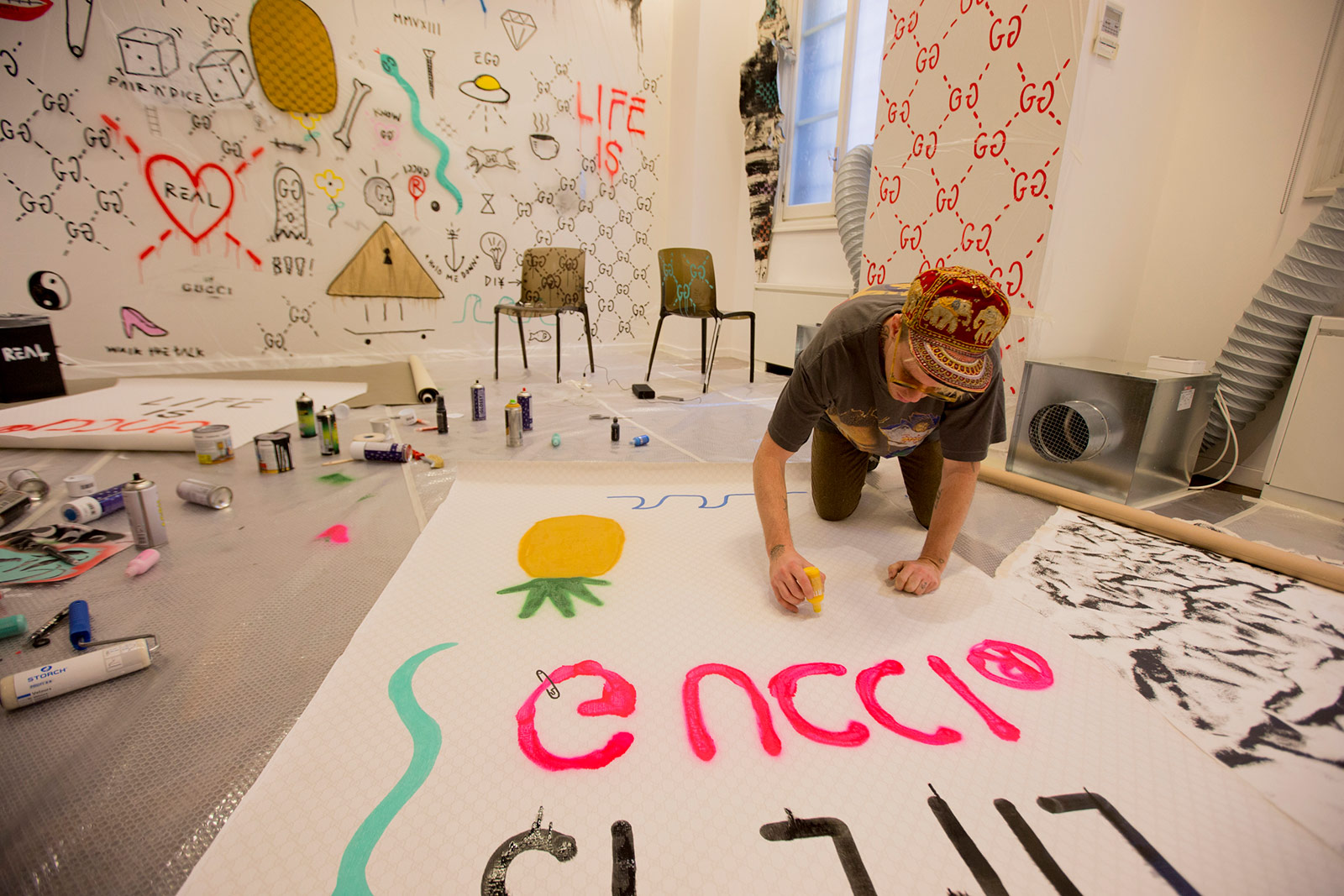 Most of the fashion industry is against copycats and will issue lawsuits for misuse of their name. Weren’t you scared of being accused of appropriation when GucciGhost and your art started to grow online?
No, I wasn’t. You know, people definitely always said, “they’re going to sue you!” but I never felt like that, because I never felt like I was stealing anything. I was actually offering something that didn’t exist yet. I displayed it and tried to put it on as many platforms as I could, I crossed so many different mediums when I was applying this idea. And then an old friend of mine, the photographer Ari Marcopoulos, was asked to shoot the Gucci Pre-Fall lookbook. He knew I’d be really excited about that, so he showed my work to Alessandro, who was like, “oh my god, he’s crazy, he’s obsessed.” But he felt like we had that in common, so they called me and were like, “come to Rome!” So I flew out.
What was meeting creative director Alessandro Michele and teaming up with Gucci like?
The first meeting was cool, we went for lunch, got to know each other, talked about life and stuff, and then we went to the office. I had brought two big suitcases full of canvasses, jackets that I had made, paper bags – just all these different ideas and sketches to show.
Were you nervous?
No, I was actually super excited! I already knew that Alessandro got it, he understood what I was doing and he saw how it would apply. So for him, to open the bag while everybody was standing around in the room was like a shining coming out of the suitcase. Everybody was so excited, and from then on I immediately knew I had direction in my head of where to go, because I knew Alessandro was already feeling it. He would bring in things that he had already made and we would just build on it together and play music; it was amazing to watch his speed of work and how fun and flowing he is. 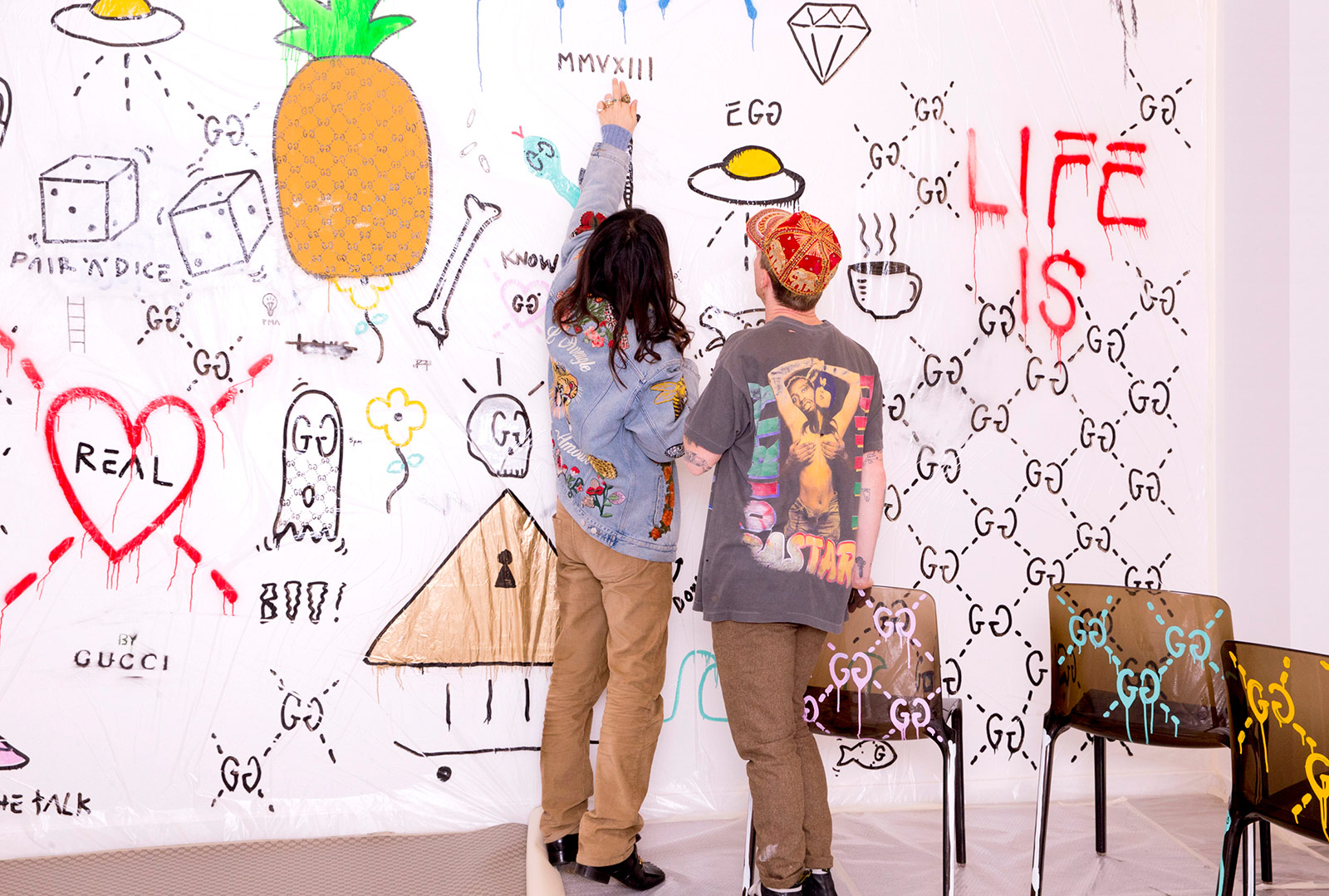 Was there a lot of creative freedom in the design process of the GucciGhost collection?
Oh, totally! He’s fearless, he just said, “here’s a bag, paint on this, do whatever you want.” It was fun for me because I’m not good with rules, we just trusted each other and it was an amazing experience. I think we started off thinking that maybe I would do a print or something and we ended up doing so many things.
Besides all the things you’re doing now, you started off as a snowboarder. Has the skate culture influenced your taste and the appreciation of branding that is also visible in this collection?
Definitely. I think skateboarding is really my entry to art. It influenced my taste in music, how I think visually and how I’m exposed to things. It’s also a mentality, like a DIY kind of thing, finding your own direction, having no rules of how it’s supposed to be done. I think that this completely shaped me in a big way and it’s been a huge influence on me for sure – it’s just kind of like the culture I live within, you know?
You didn’t go to school to be an artist or to make music, how would you describe your way of working and approaching projects?
I just find my own way, pick my own line, I think that’s where it’s fun. Finding your way to do it. I think it would almost hinder me if I knew more. Sometimes things have to go in steps, but I think that just to write a song or to make a painting is about expressing yourself in an honest way, it doesn’t always have to be super complicated.

“Gucci was the brand I knew about without knowing about, you know what I mean?”
So you don’t start off with a plan?
Never. I don’t really map out anything; I look at things and pretty much just do things. I think you have to mess up to get better, I think that’s all part of being an artist and part of fashion, everything is about experimenting and being fearless and trying to push it.
The phrase “Life is Gucci” and the word “REAL” are seen throughout the collection and have kind of become your signature within Gucci. Can you explain what you mean by those? Would you say that it has become some sort of vocabulary?
Yeah, that’s what I was saying. I think that’s definitely become part of the English language, as far as just describing something as good or great, you can say, “life is Gucci.” It’s just about being positive and being like, “life’s good.” And I think the REAL thing is about how I started the GucciGhost project. When I told people that I was going to do this, I believed in it until it was real. That to me is really what the project represents, believing in something. And that’s what I’ve never had a problem doing: believing in what I do, so that’s why I’ve kind of gone all these different directions in life. I want to encourage people to believe in whatever their passion is.
It must be amazing seeing people like Rihanna, Madonna, and Beyoncé, amongst many, using pieces from your collection. How would you describe the style of the collection and why do you think it works so well?
I think it’s just exciting and fun. I initially approached it by breaking down clothes, stripping down something and making it more raw, and I think that people are having fun with it, they can relate to it. I feel like my stuff is just an addition to the most amazing pieces in this line. It’s just… I mean; I love it! It’s an honor for me to be a part of this and see anybody having it or posting it online and being excited about it. Having that precious moment of “OMG” when you get a piece that you love, that’s what the brand represents to me and that’s why I did this. It took me in all different directions, but that was the motivation, to express that feeling. 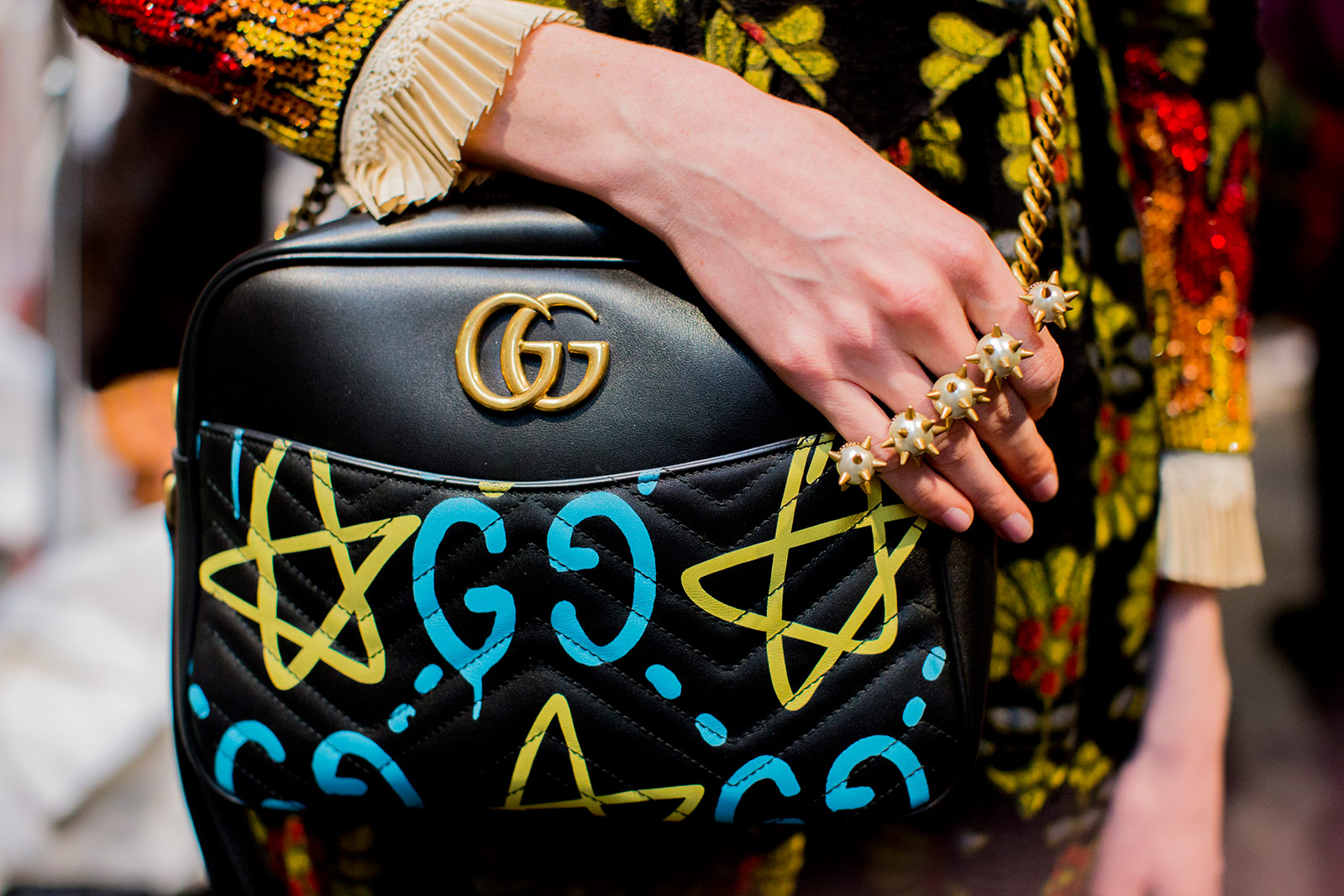 Kind of like the feeling when you bought that first Gucci watch at the age of 17?
Yeah, totally.
You were the DJ for the launch party of the collection in Barcelona, how did the music you played fit the collection?
I think it’s because it fits me, I just play what I like. That’s just what I do; I do things that I like, so I don’t know!
I read somewhere that you were getting the tattoo “it was all a dream” on your arm. I’m wondering if you already got it and if that’s how all this felt to you, like a dream.
Oh, really? I didn’t know! (Laughs). Somebody said that? That’s crazy! But it’s a good one; I have thought about that, it’s a great quote. Well, yeah, it was a dream for sure, it was something that I thought about a lot and spend time believing in, so it definitely was one of my dreams and it definitely came true. I’ve had luck with that, believing in things. I just find things that I truly love and play, and it seems to work. 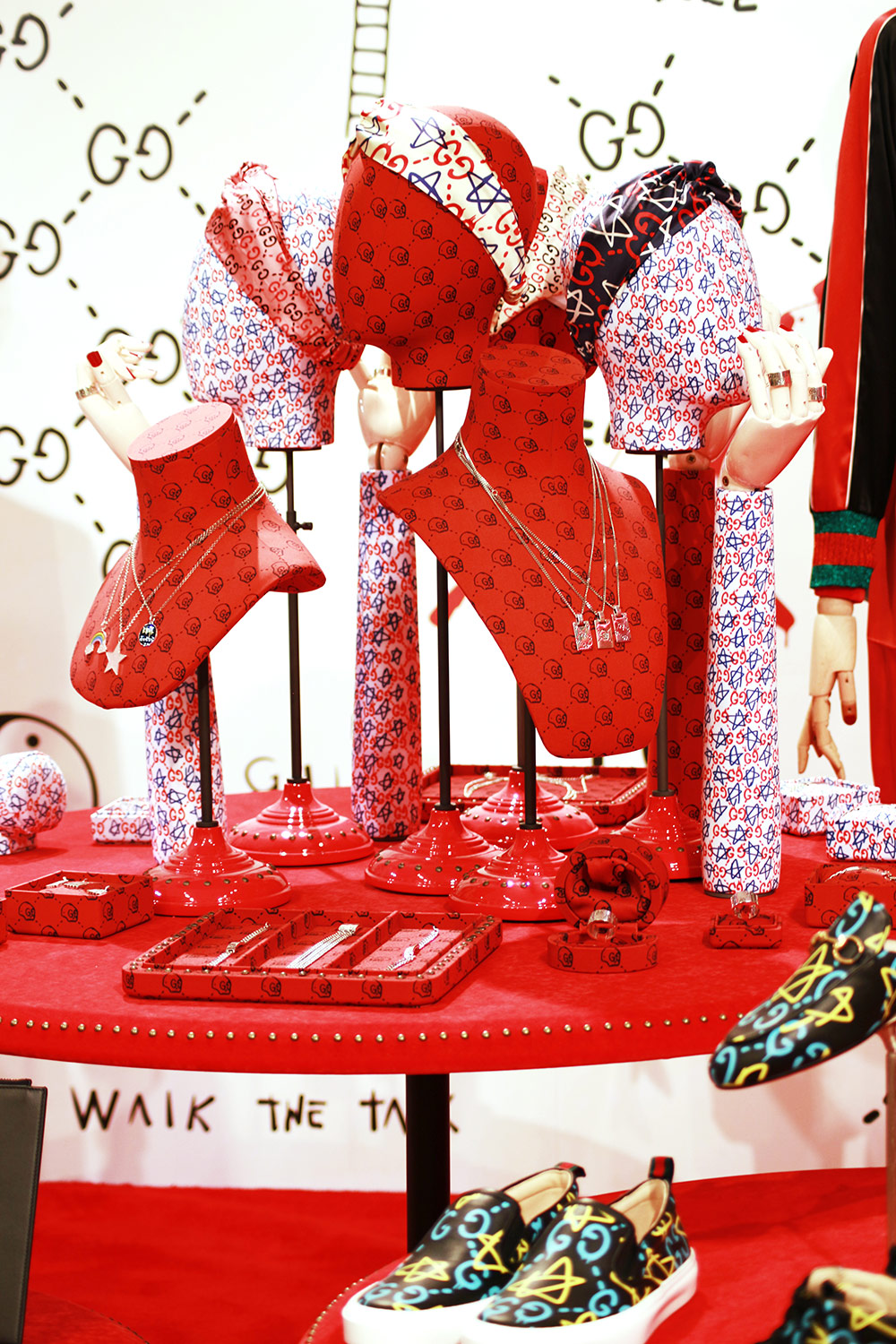 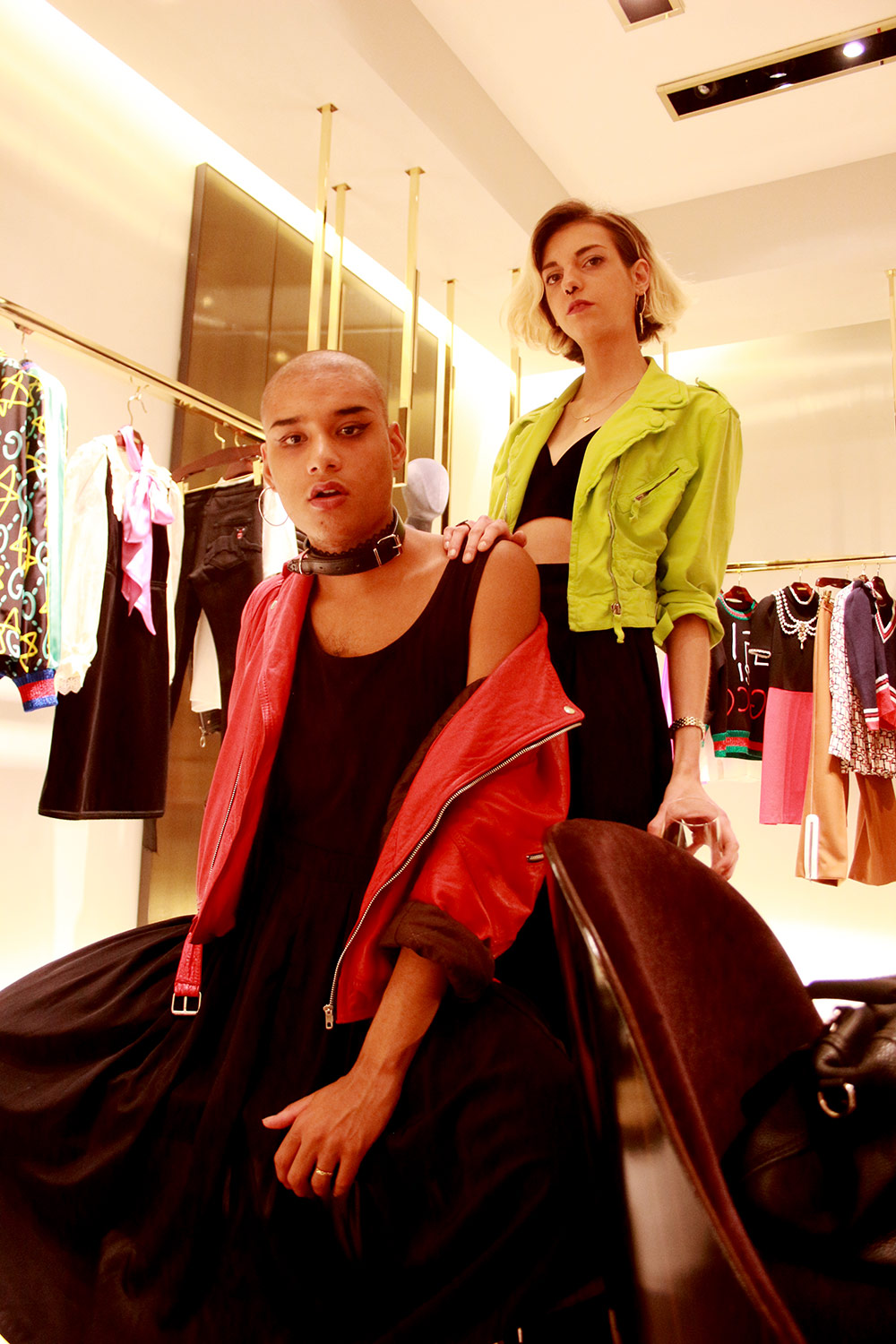 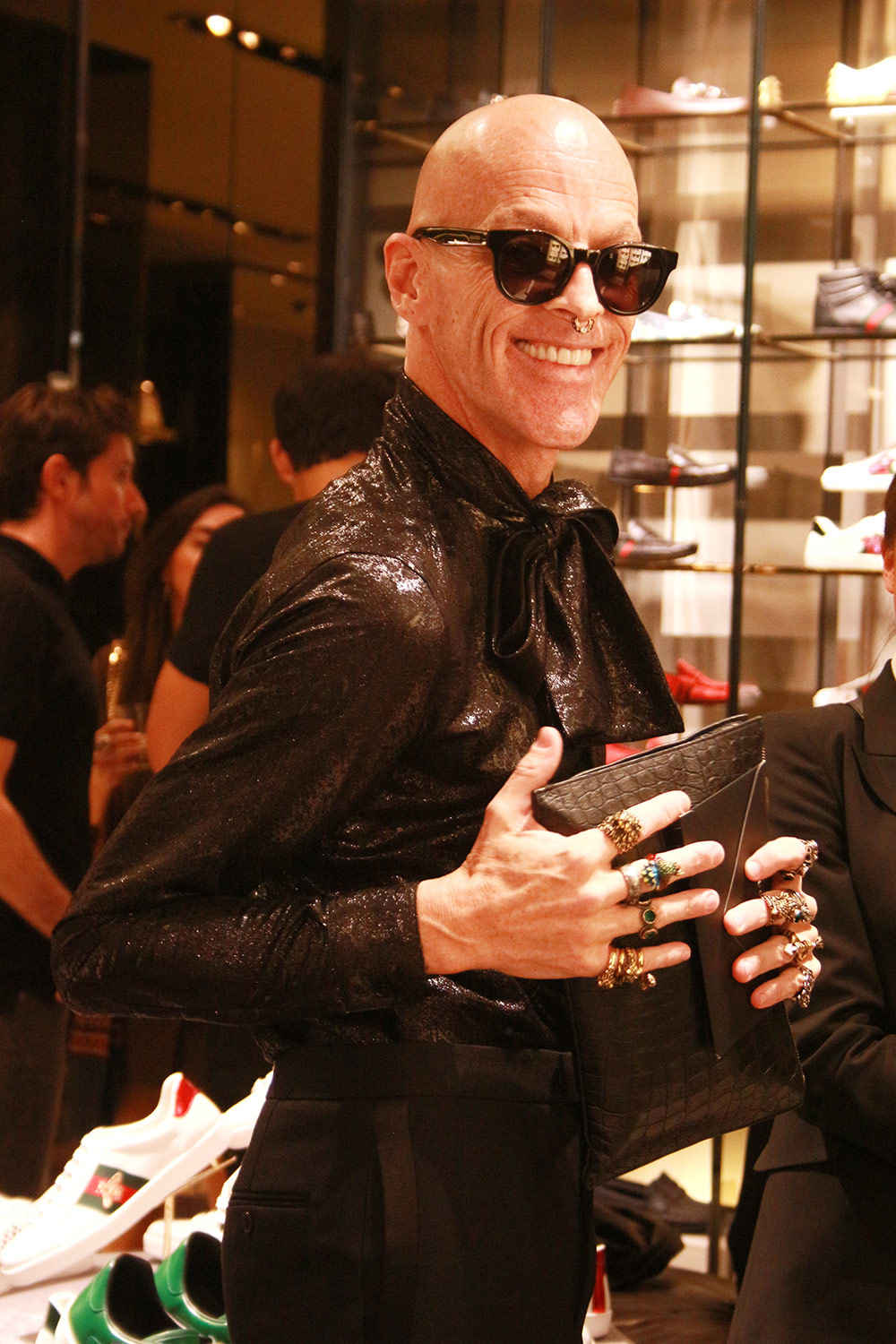 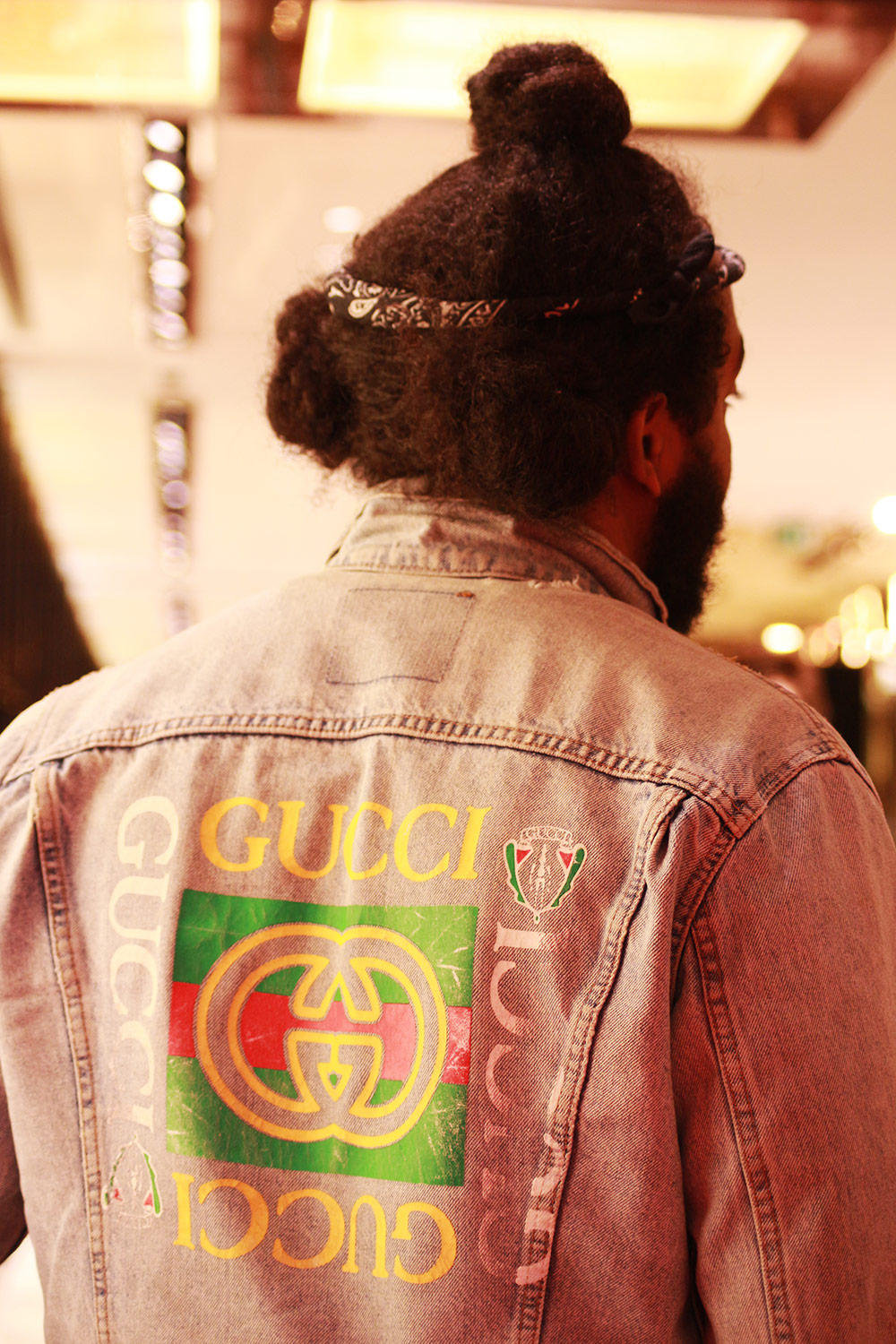 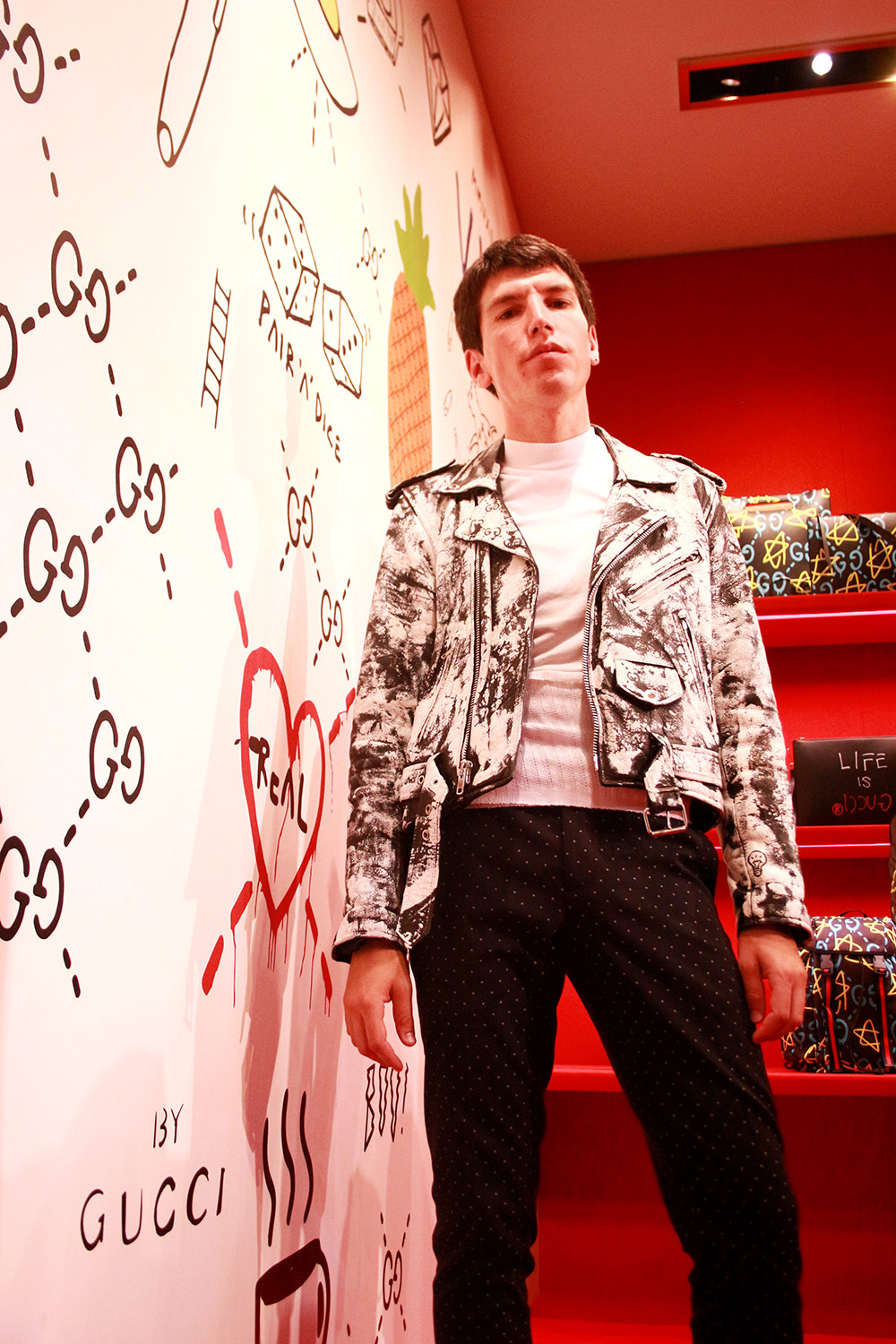 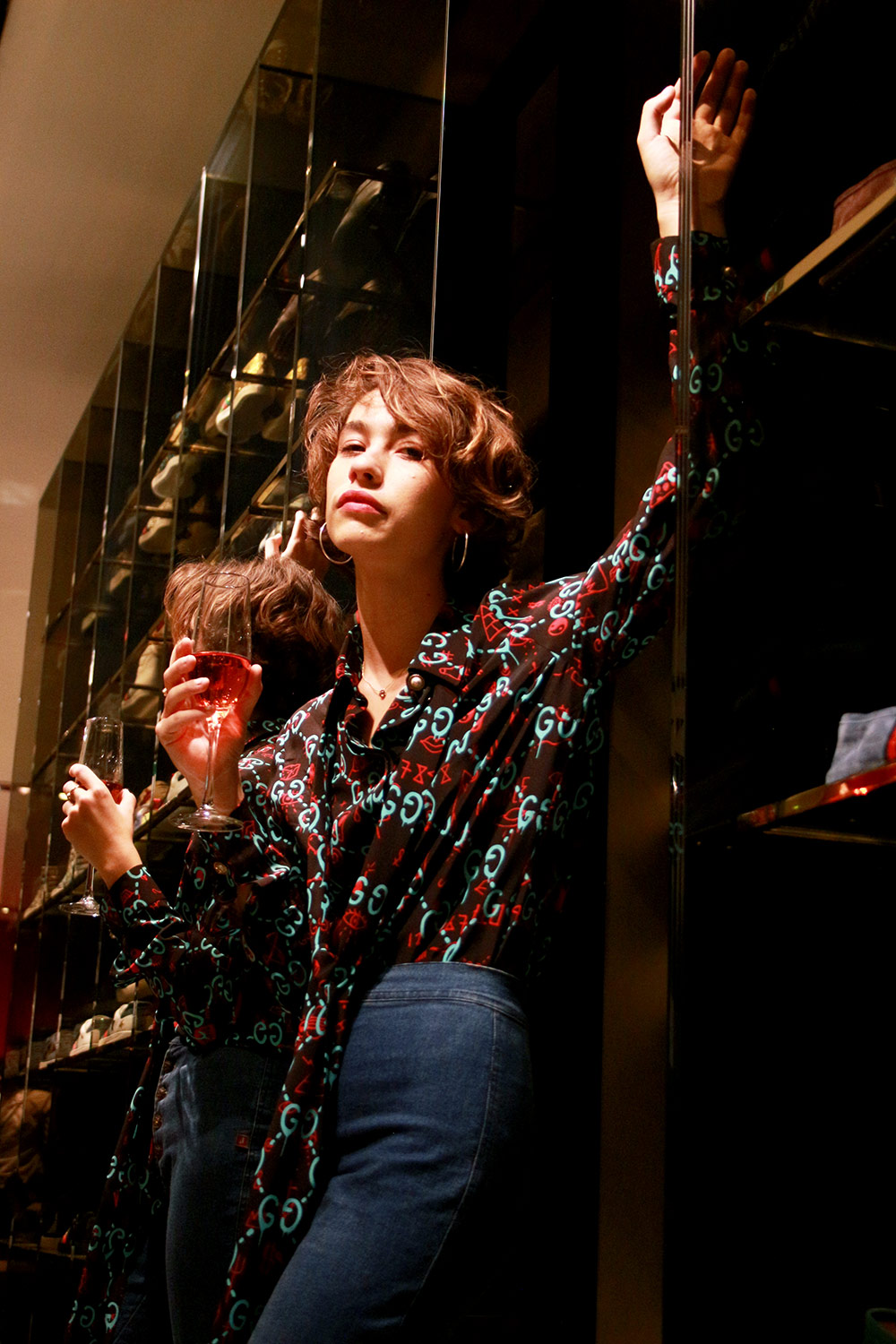 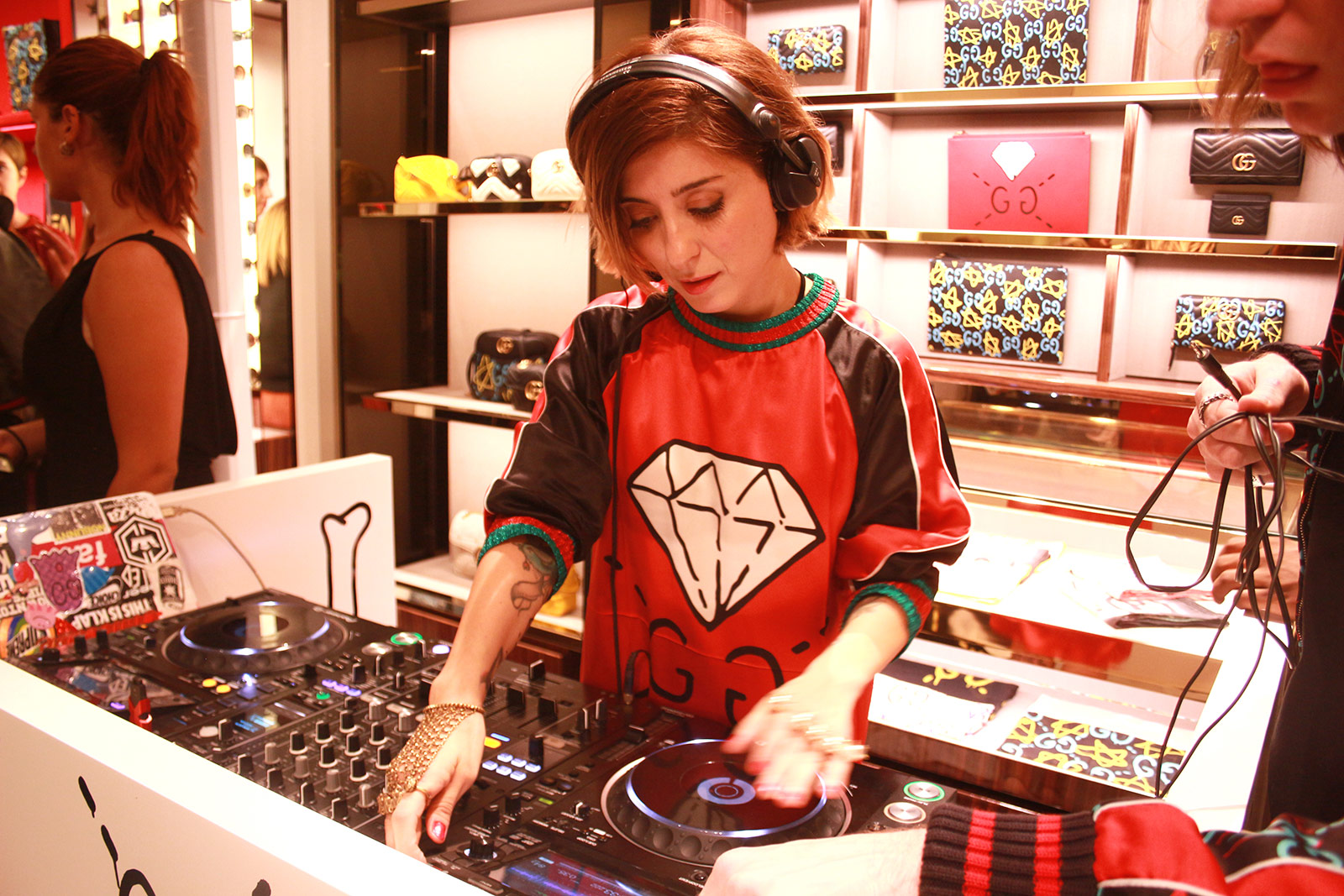 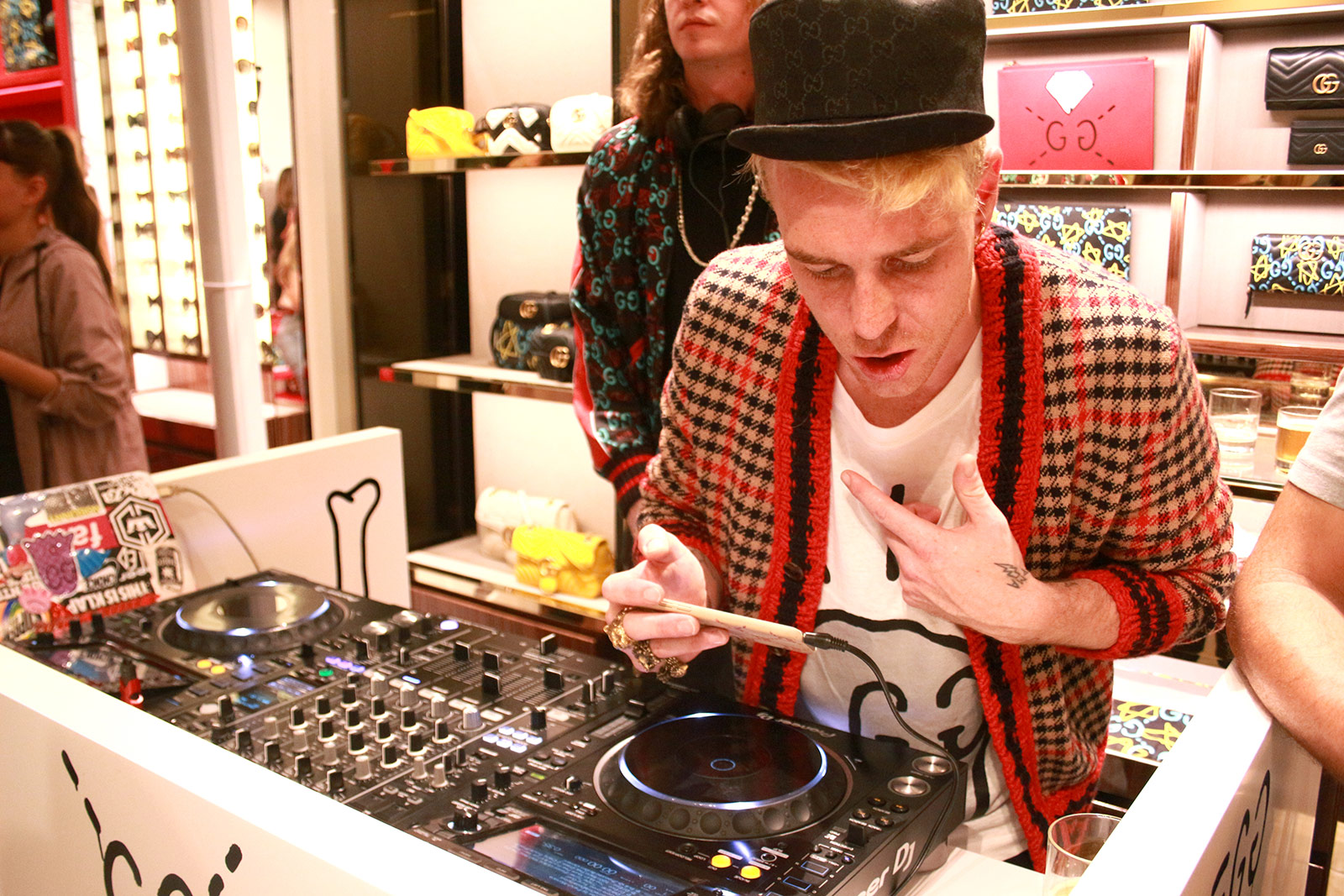 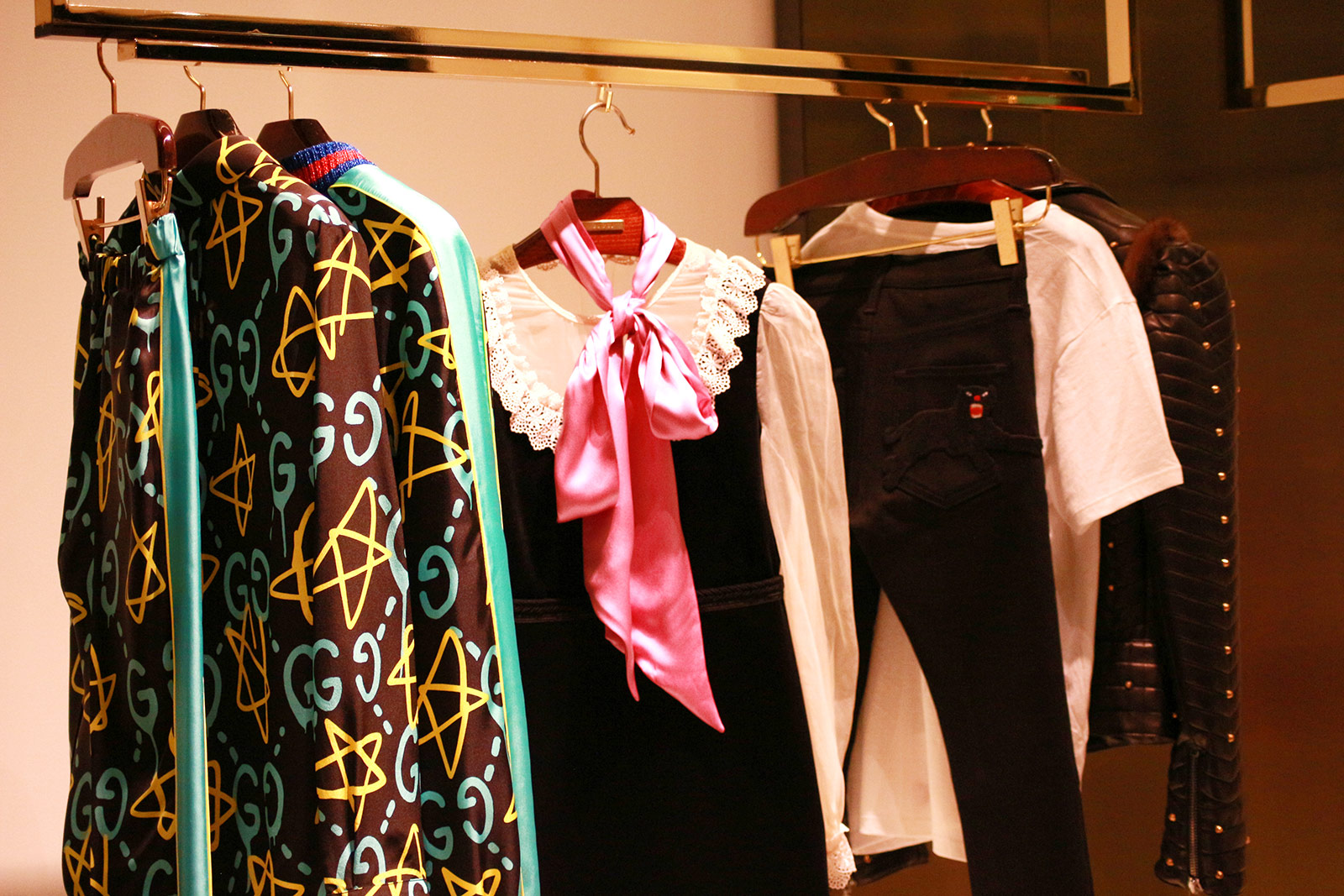 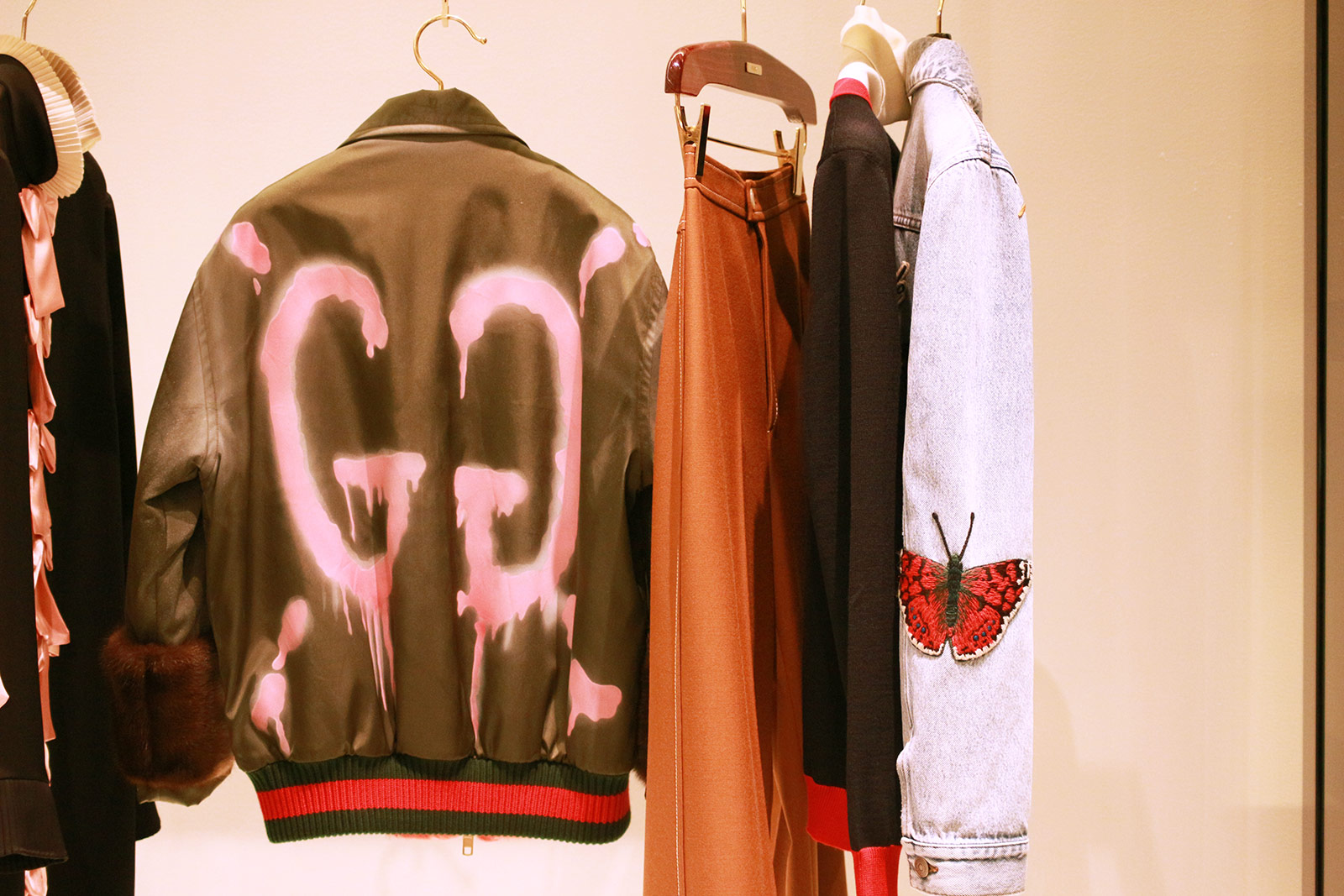