A critique and commentary on society 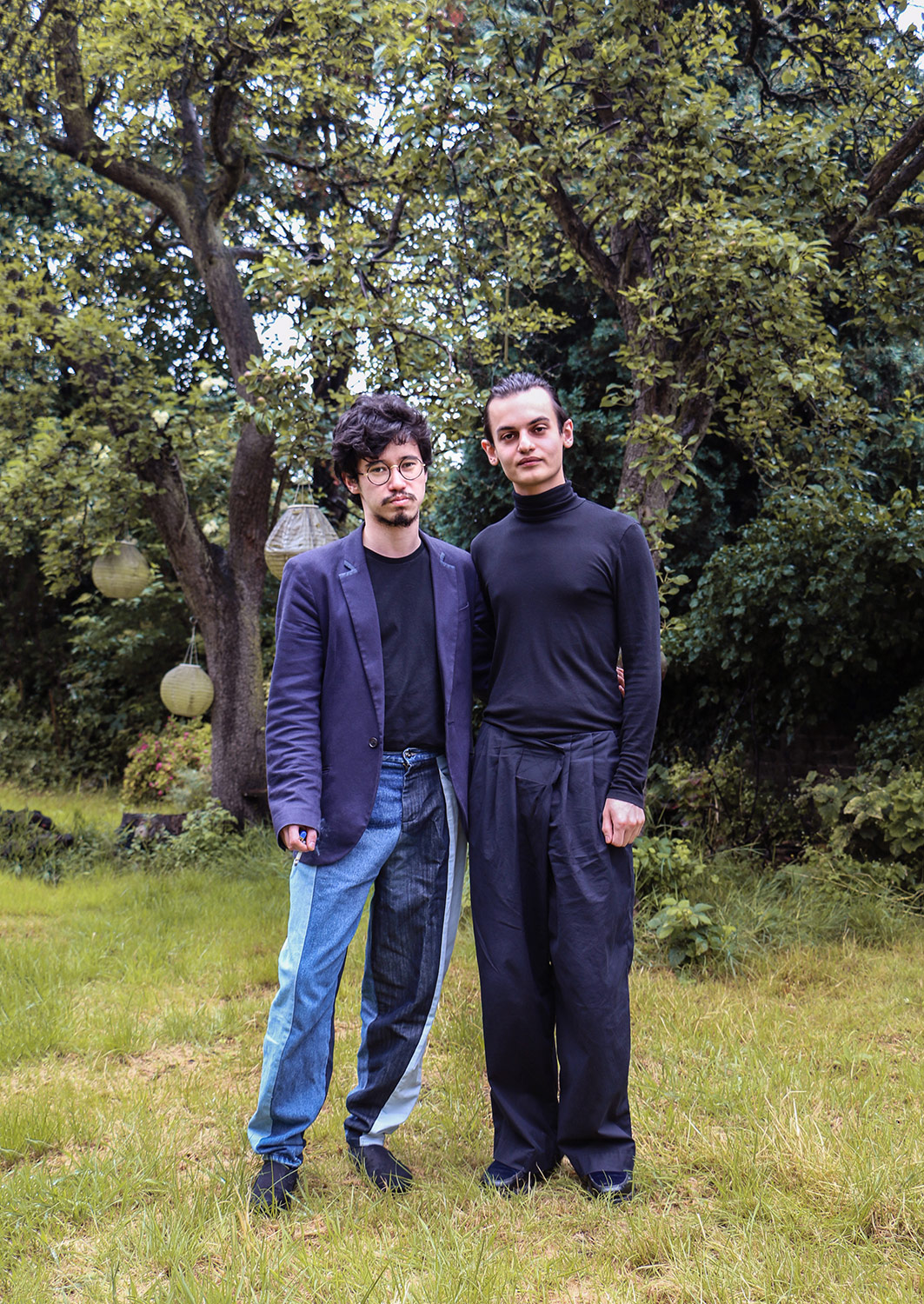 Timur Kim engages with clothing emotively, creating deeply personal and narrative based collections, whose silhouettes escape traditional gender norms. Pursuing his passion as designer, he left Russia to continue his growth and studies at Central Saint Martins in London, where he has now released three collections. Timur Kim and brand manager, Tigran Karapetyan, join METAL today in their London studio to unravel the heritage and values which lie intertwined within past and present collections.
What does Timur Kim represent?
Timur: As a narrative focused brand, each collection encompasses a different story. The idea of staying true to oneself is a prominent element that defines the brand, its foundations grounded in critiquing and commenting on things that bother me in society. It’s about how we can react to these outside world elements, elements such as equality and gay rights.
What are the brand’s main values?
Tigran: Equality is probably our main value. Fair representation to all sorts of people, but especially the gay community.
Timur: We are in the time where all these elements, from gay rights to anti-racism, are being talked about. Fashion before didn’t necessarily reflect what society was witnessing, yet now interestingly it is starting to mirror it, it is beginning to react, comment and critique what is currently undergoing in social patterns. How we dress is how we portray ourselves, when we walk out on the street we talk through our clothing, it is a means of expressing not only identities, but our values.
You come from a multi-cultural background, being half Russian and half Korean. How has this had an influence on the way you approach design, and the conceptualisation of the brand?
Timur: Tigran being Armenian raised in Kazakhstan, myself Korean raised in Russia, all reflect how the brand represents a collage and amalgamation of cultures. Within my collections I am more in touch with my Russian background, for the Korean part unfortunately is lacking due to the absent relationship I have with my father. However my upbringing, in such the memories and experiences in different countries I witnessed throughout my childhood have all come together within these collections, and this is prominently visible through the element of patchwork. Each textile reflects a memory or idea, it’s almost a part of the soul. This explains why different garments have particular silhouettes reflecting certain eras, and styles.

Patchwork is one of your signature elements, present in each collection.
Timur: Yes, we tend to use this element in a subtle way. It’s about two fabrics being seamlessly joined together, the reference. Patchwork is the idea of the reference and I find that in my collections several references come together within one piece. 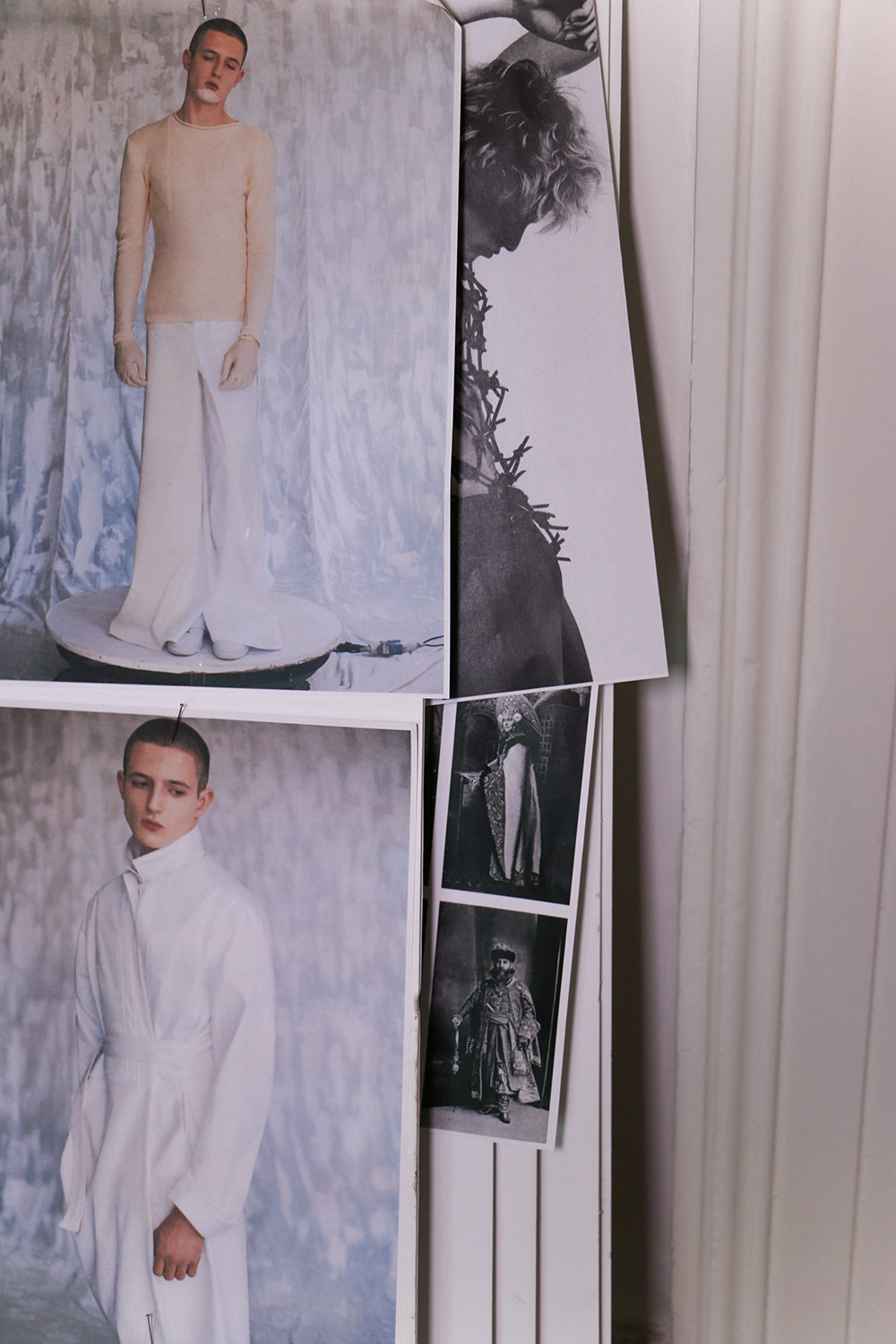 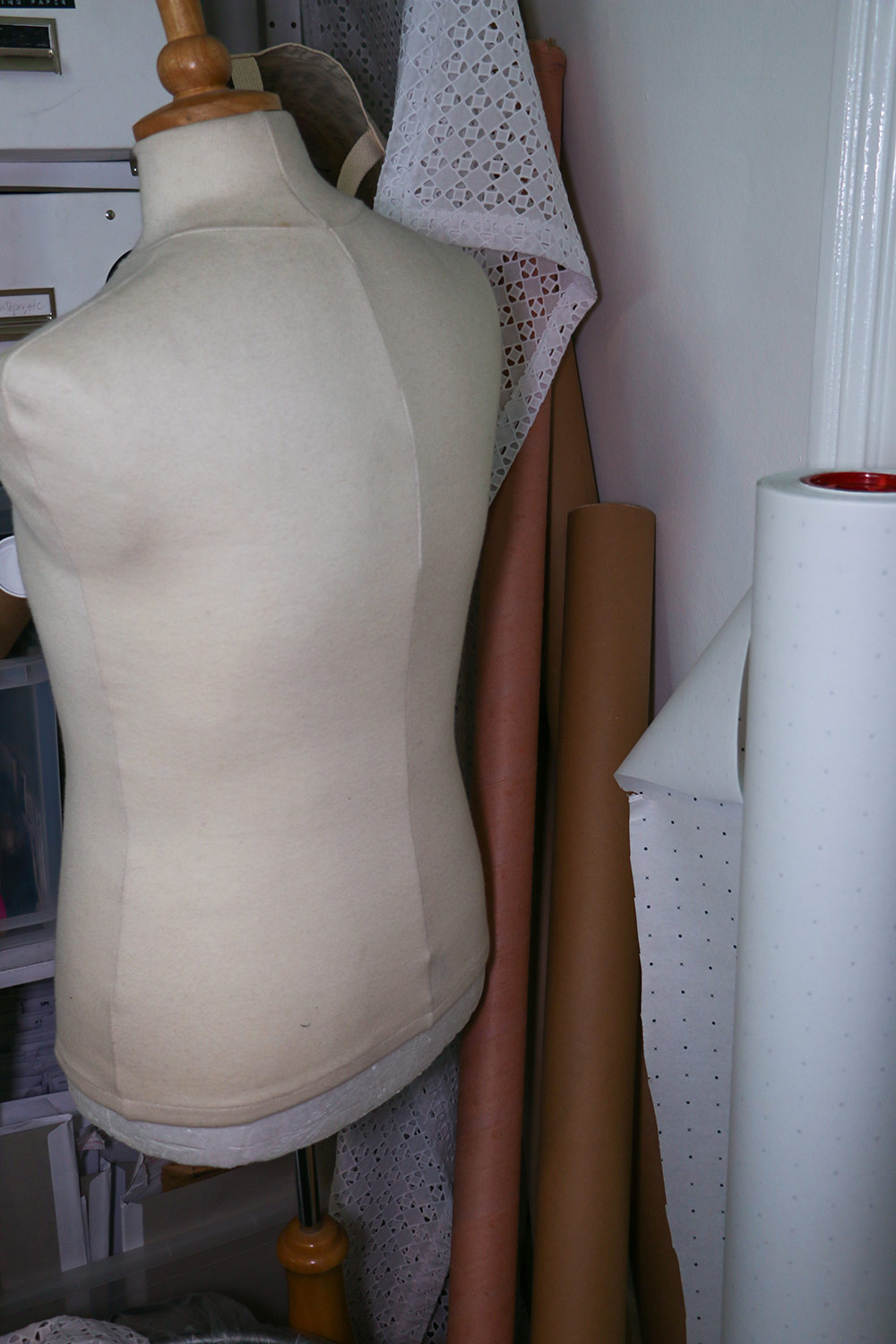 What have been your biggest inspirations?
Timur: I think it’s all about people I have met in my life and the events that have happened within my life. The images of early Dolce & Gabbana and Dirk Bikkembergs within my research are not so much inspirations for the sake of love and enjoyment, but more in terms of how they were constantly present during my upbringing and studies. When I was raised in the ‘90s in Russia, the whole society was very much influenced by Dolce & Gabbana and sportswear, to the extent that nearly every person would have Dolce & Gabbana jeans. Having these memories and being able to return back and contemplate on what was so luxurious about the textile, are all fragments of inspirations that constantly arise within collections.
Do you feel that your move to London influenced your work? Looking back, do you think your creativity was restrained when living in Russia?
Timur: I was 16 years old when I moved away from Russia. When I was still living there making clothing I couldn’t speak as feely, but I could put the references subtly within the collection. The situation in Russia compared to London did not allow you to talk freely about gay rights or even equality, which even to this day is still not as accepted, so moving away definitely allowed me to have more space to voice and express my opinions.
Did Central Saint Martins have an important role in challenging your aesthetics and creativity?
Timur: CSM definitely pushed me to think outside the box, to understand the concept of design. The course taught me how to research and how to pull out the idea not directly from the surface, but by reading between the lines and unpacking further.
When did yourself and Tigran meet? What is the synergy between you two in relation to the brand and direction?
Tigran: I first met Timur in January 2013 whilst at London School of Economics studying Philosophy and Economics. I was really interested in doing something creative and researched a few internships in the fashion and film industries, and ended up going to meet Timur for an internship. We became friends instantly and after the first meeting I saw that he was literally doing everything himself; accounting, sales, PR, and of course creating the collections. I was quite shocked and begun to help in my free time, and gradually we realised how well we worked with one another, and after graduating in 2014 I joined full time. I see myself as quite active in the creative process. I have my contributions in terms of assisting Timur in the creative direction, in such we discuss the colours, silhouettes, but then again at the end of the day it does come down to Timur’s decision. Timur at times has the tendency to get carried away and I tend to bring him back and the other way round too, whether it’s because my ideas are too strange and his too commercial, or vice versa. So in that way there is always this dialogue between one another, a positive and constructive synergy.

“Clothing is a means of expressing not only identities, but our values.”
Recently we have begun to see an emphasis on gender neutral fashion in the industry. What does it represent to both of you? How do you see it evolving?
Tigran: For me ideally it’s about the idea of liberation, because we talk about how we live in a liberal society here, in the West –less so in Kazakstan and Russia–, but here we always talk about society as quite liberal and however seeing a boy wearing a skirt is still quite a strange idea to many people. I think that is the next step in terms of liberation. I once read somewhere that womenswear and menswear don’t exist unless a person chooses to classify them, and once a person decides to wear that, it automatically is given a gender term according to the gender of that person. In that sense, our collection worn by a man can be menswear, but once worn by a woman becomes womenswear – it has no label.
Timur: I think that with what we are seeing, men’s fashion week, women’s fashion week, couture, pre-collections women, and now even pre-collections men, there is too much and I think it could merge into one spring/summer collection and one autumn/winter collection. Similarly to Burberry, who are merging their shows into one. It makes sense, as it’s one brand and you want to be able to see what the “community” would look like; both men and women wearing one collection rather then seeing two separate collections and the companies vision of what dictates women’s and menswear.
I understand that each collection is built from a story and narrative, something you call chapters. Can you expand on past collections and the stories?
Timur: Initially, when I begun to design, I understood that with each collection you have the possibility to change yourself, you can try different masks and play with different characters. In that sense, each of my collections always has a story behind it, and from the first one to the most recent we have named them a chapter, which makes up essentially a “book”. The first collection is known as Medical School, the following the Ice Rink, then The Journey and finally the next collection will be called War. These chapters all represent my journey, they are self-stories where I am allowed to expose my thoughts and views based on personal experience.
The first collection represents the time when I intended to study to be a doctor, and at the same time when I discovered my interest in fashion, hence the use of the particular gown silhouettes that explore the elegance and beauty of the drape in medical gowns. The second collection was about sexuality and being gay and is based on the narrative of my first love with an orthodox priest when I was 19. The third collection is about my travels from native Russia to London, the idea of the airplane, the escapees all heavily influenced by the collage works of David Hockney and Wolfgang Tillmans’ Concorde series, whom I studied and was very influential during my foundation course.
What is a signature element or influence present in each collection, or should I say chapter?
Timur: Denim, velvet, leather and silk are all prominent elements that I carry throughout the chapters. They not only reflect social classes, but are memories from the past. Denim I can relate to my childhood in Russia, where we had mounds of second hand jeans as they were the only things we could actually afford to wear. I grew up hating them but somehow, when designing, I was drawn once again to this fabric that I later found out I really enjoyed working with. The velvet, on the other hand, is inspired by the upholstery materials used in museums in Saint Petersburg, like within the Hermitage.
Tigran: One of our main influences is brutalism, a form of architecture that both myself and Timur were heavily exposed to during our youth. We saw the brutalist architecture inspired by the constructivists at the time, which is absolutely simplistic, some quite ugly, some of it quite amazing, and in these collections you can clearly see how we reference it quite a lot in terms of the chevron, and how we place and use patchwork. It’s more structural, more mathematical I would say than the beautiful decorative Saint Petersburg European architecture style.
Timur: Patchwork, as previously mentioned is the most prominent element, which is repeatedly used and seen throughout the collections. In the next collection we will see the repetition of a new element, characters. Characters from the past such as from the first collection (professors, doctors, and students), the second collection (aristocrats, peasants and priests), and the last collection (father, sons and cowboys) will all come together and interact with one another in one collection, giving birth to new characters and narratives.
What are the next steps for Timur Kim?
Timur: Next steps are to progress with the creation of the next collection to appear in January! 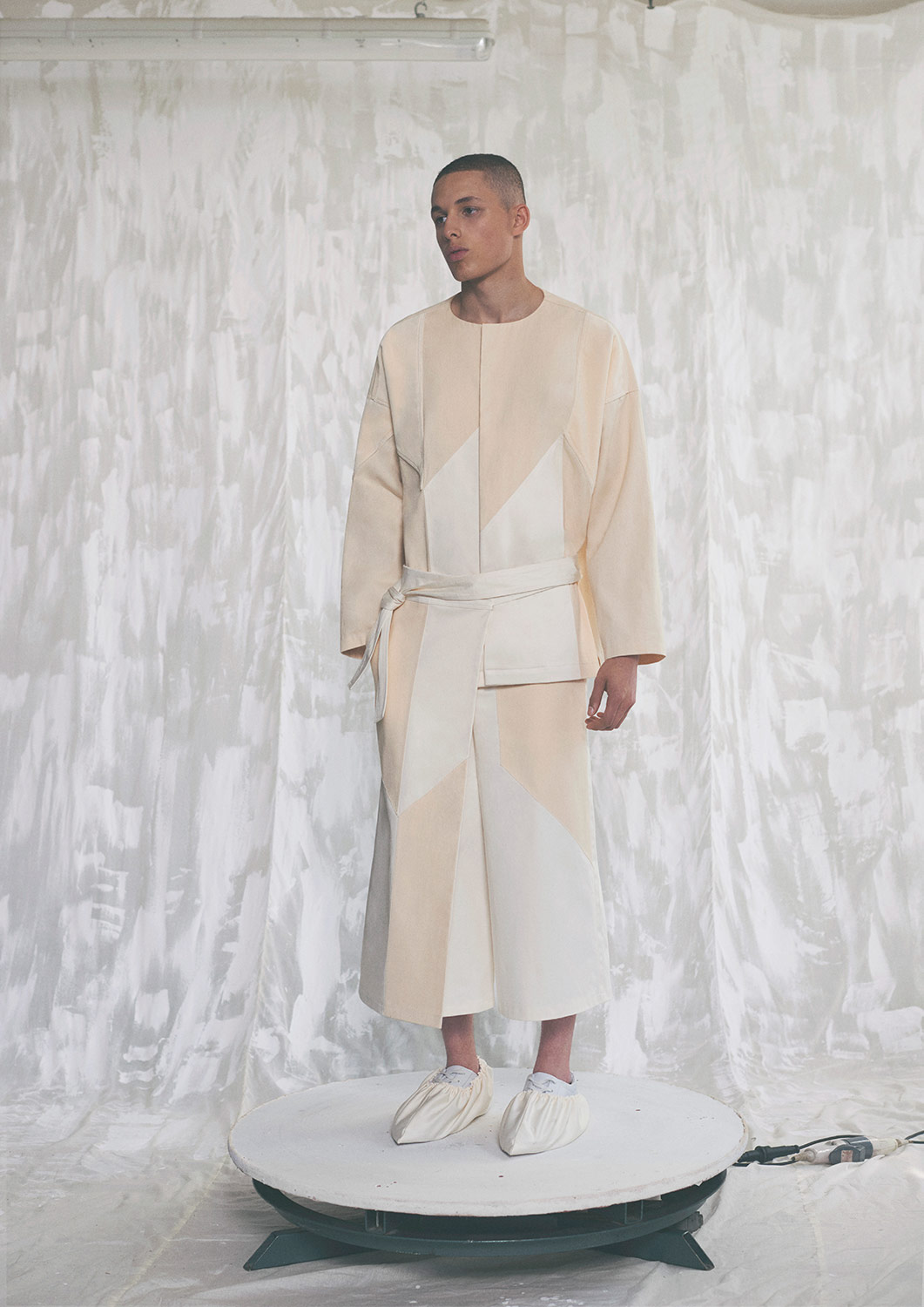 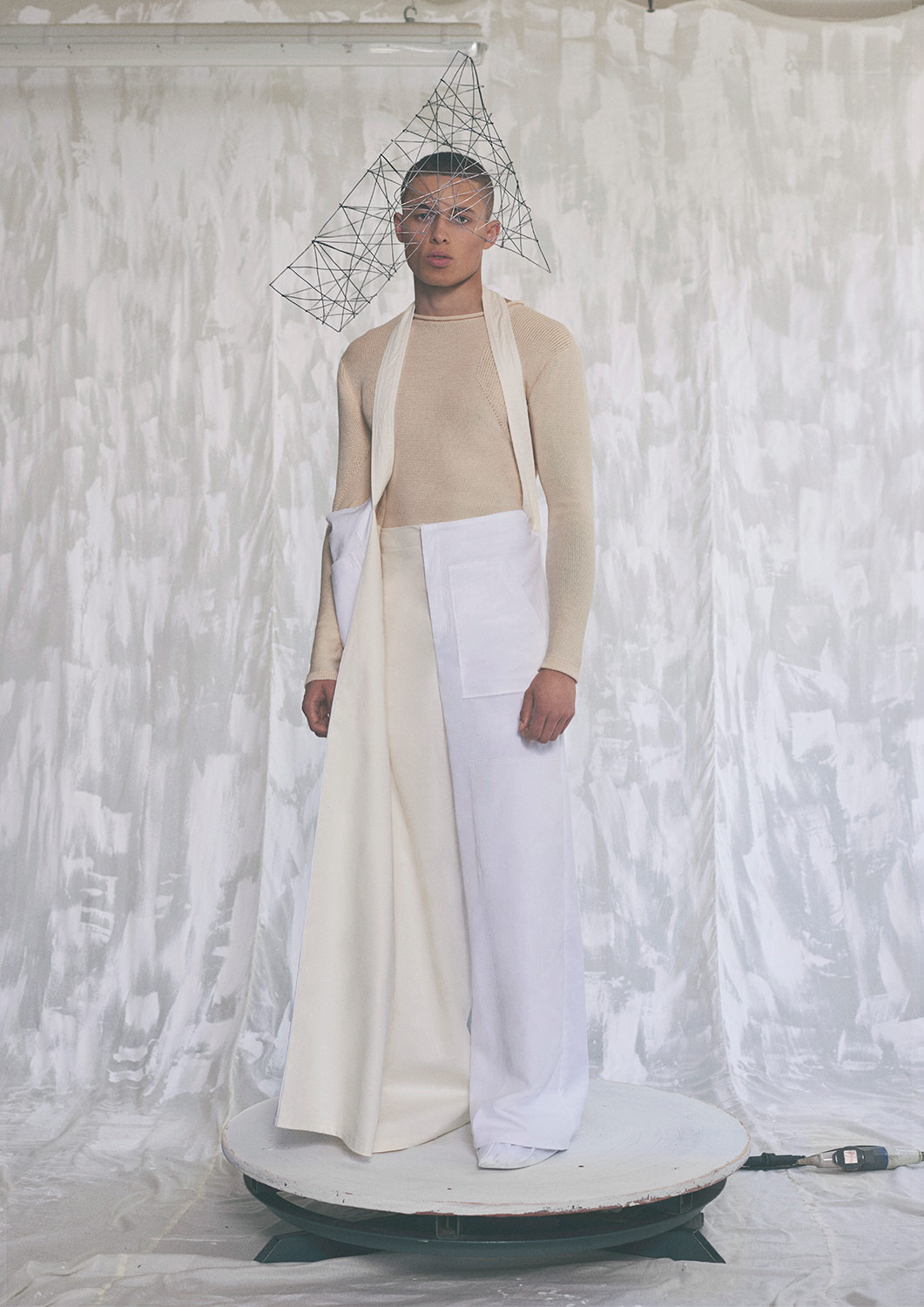 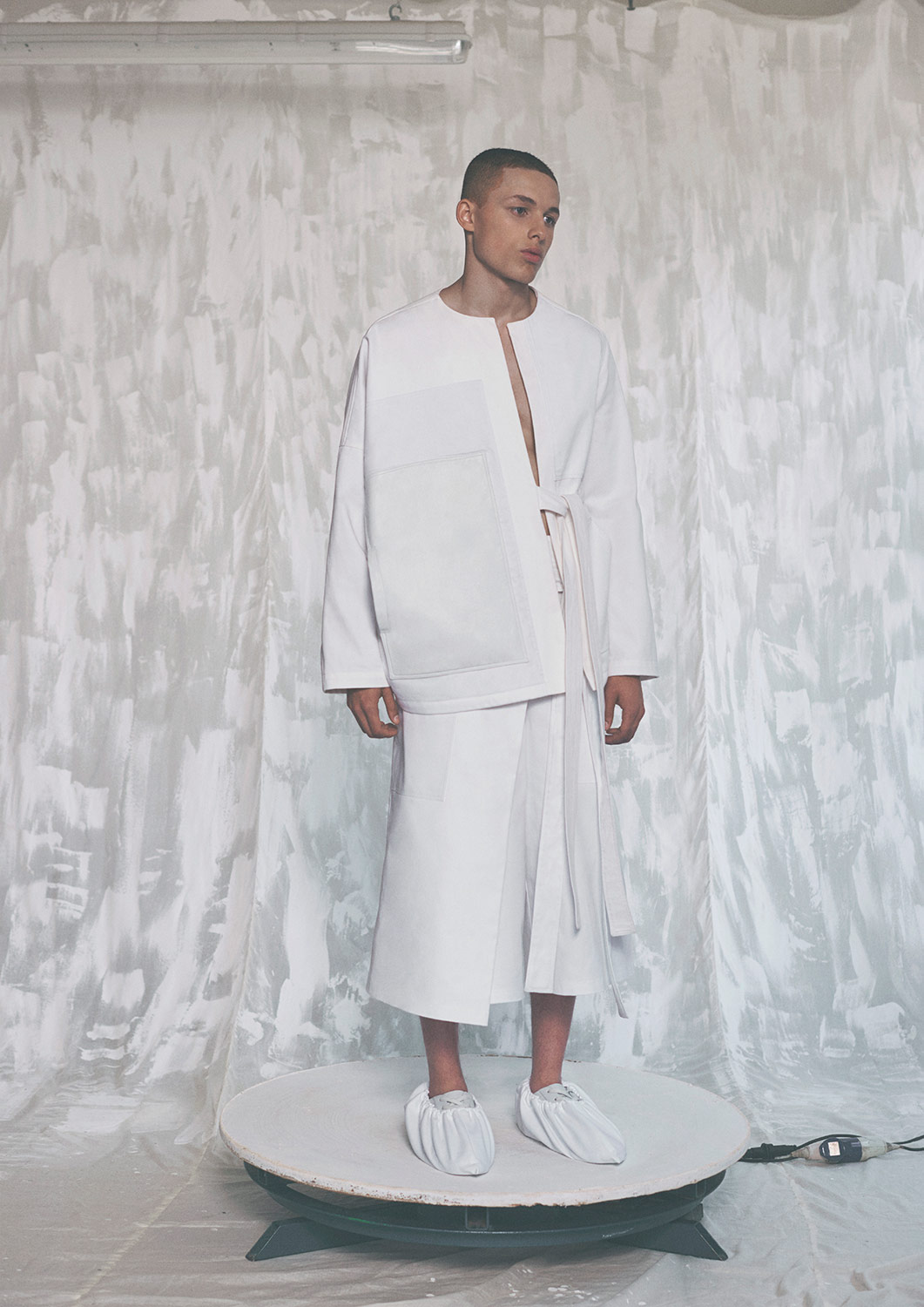 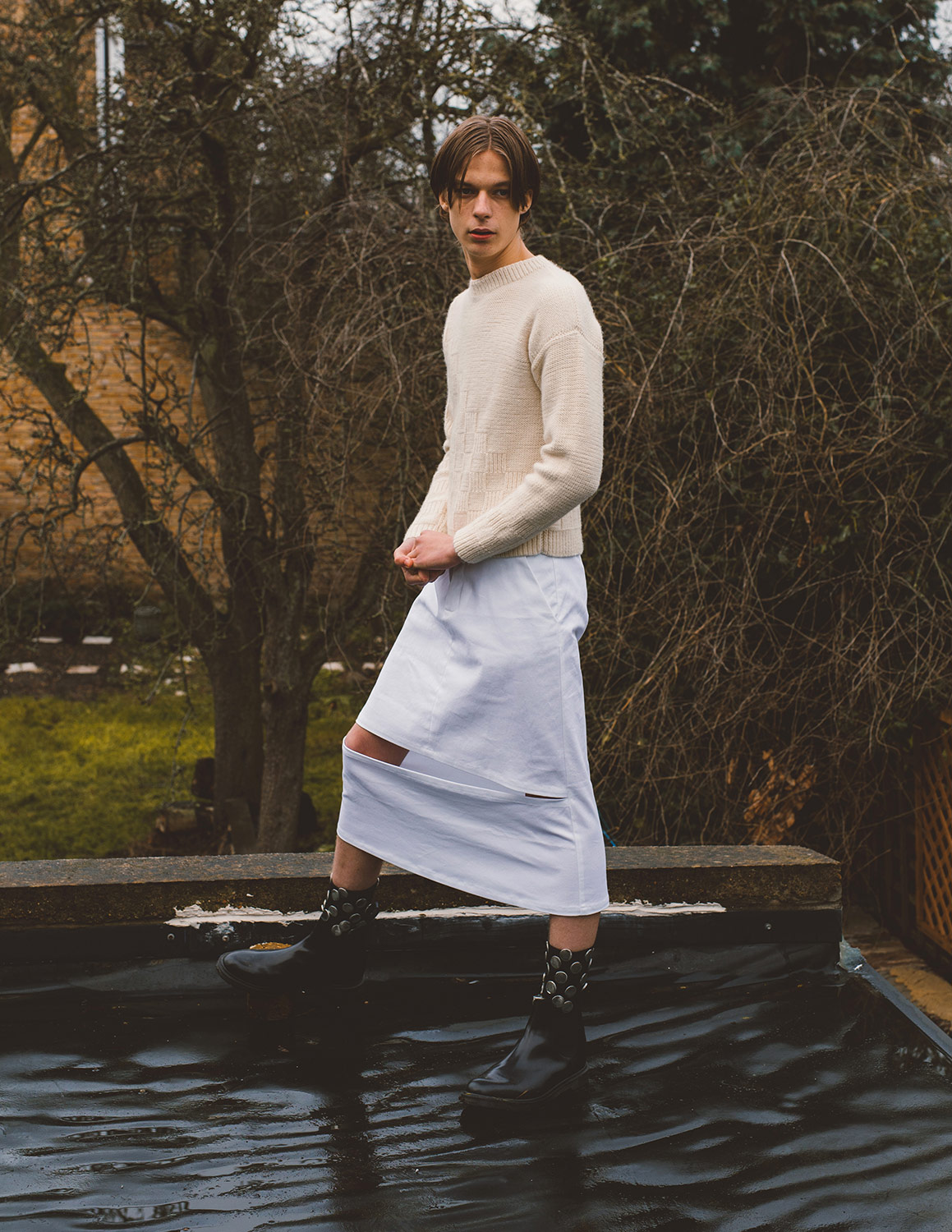 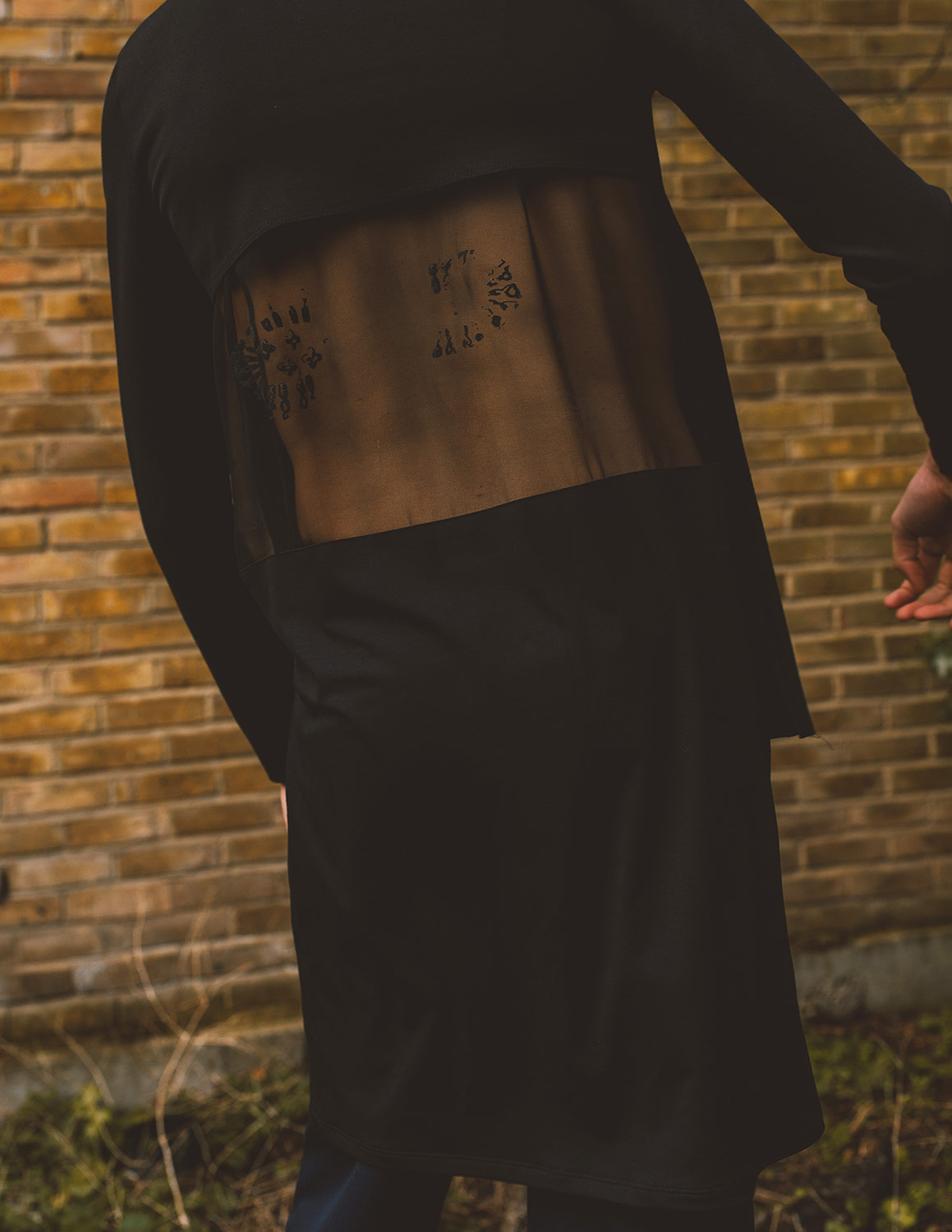 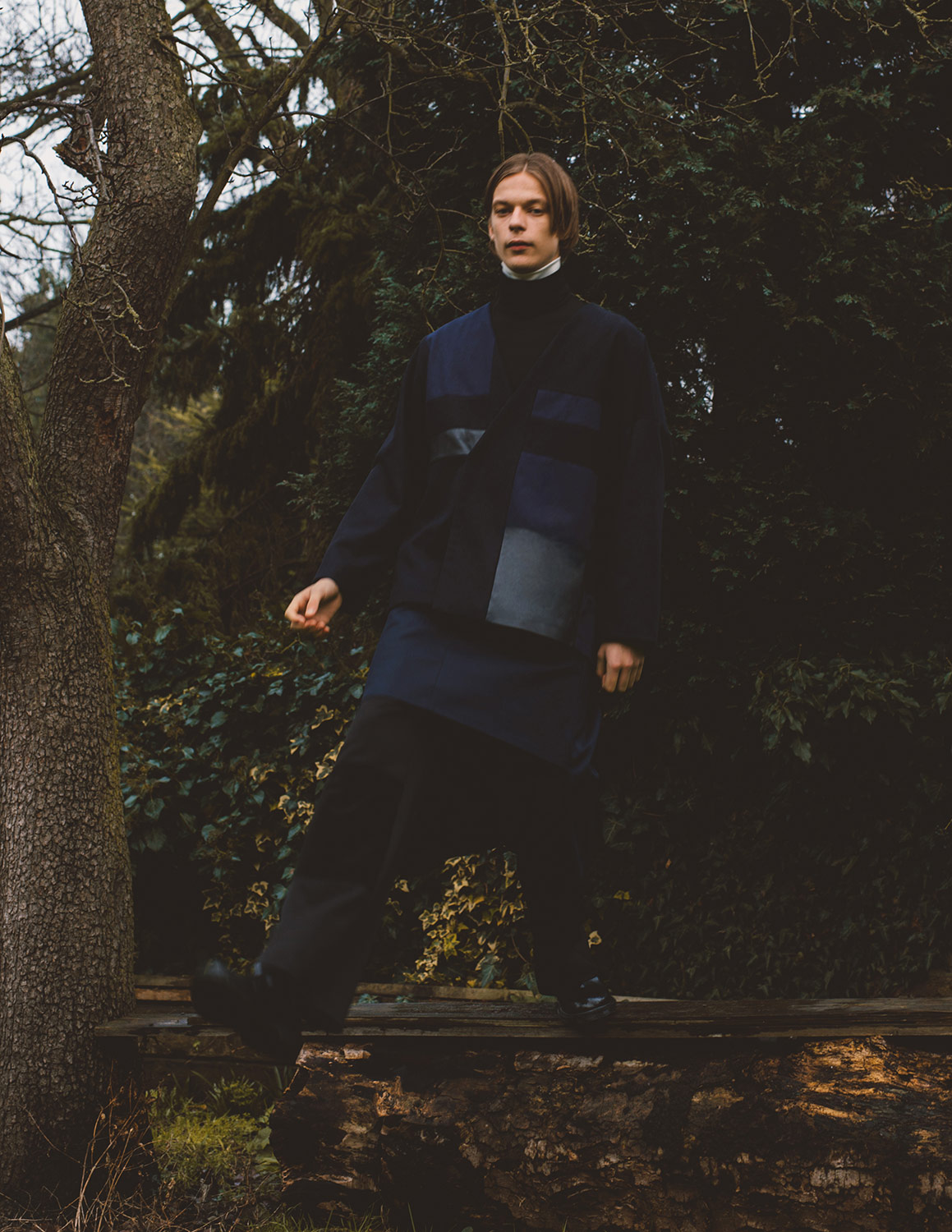 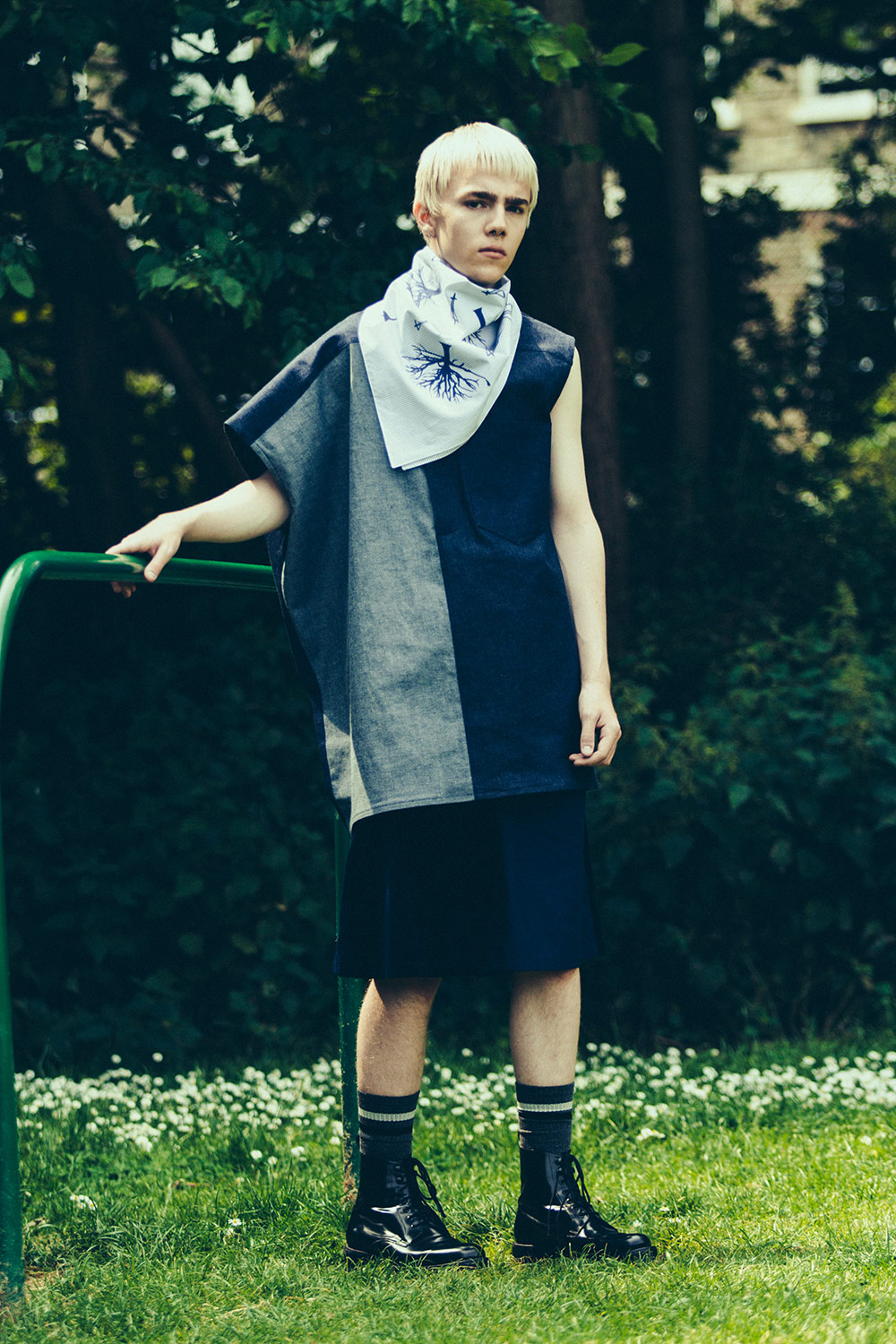 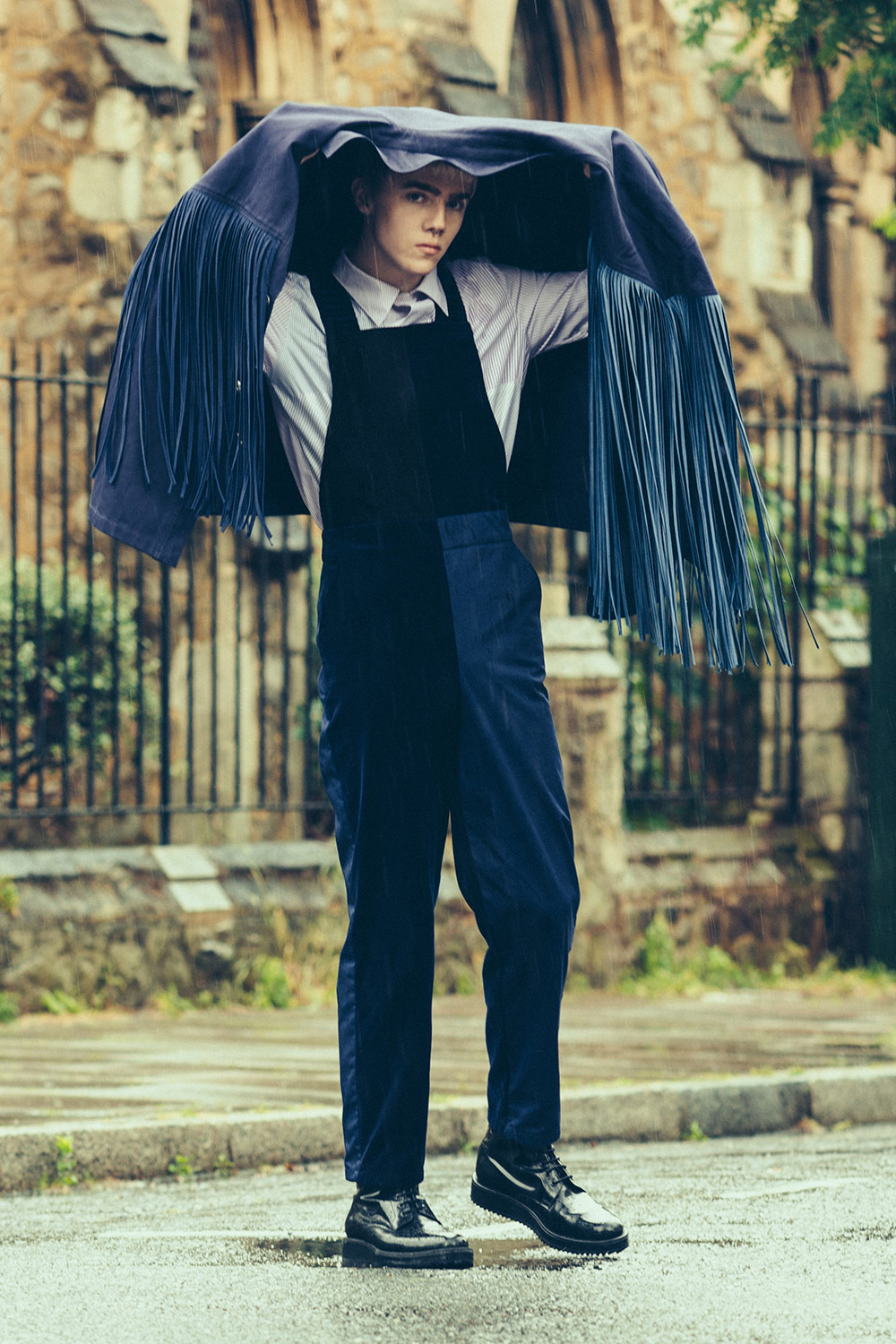 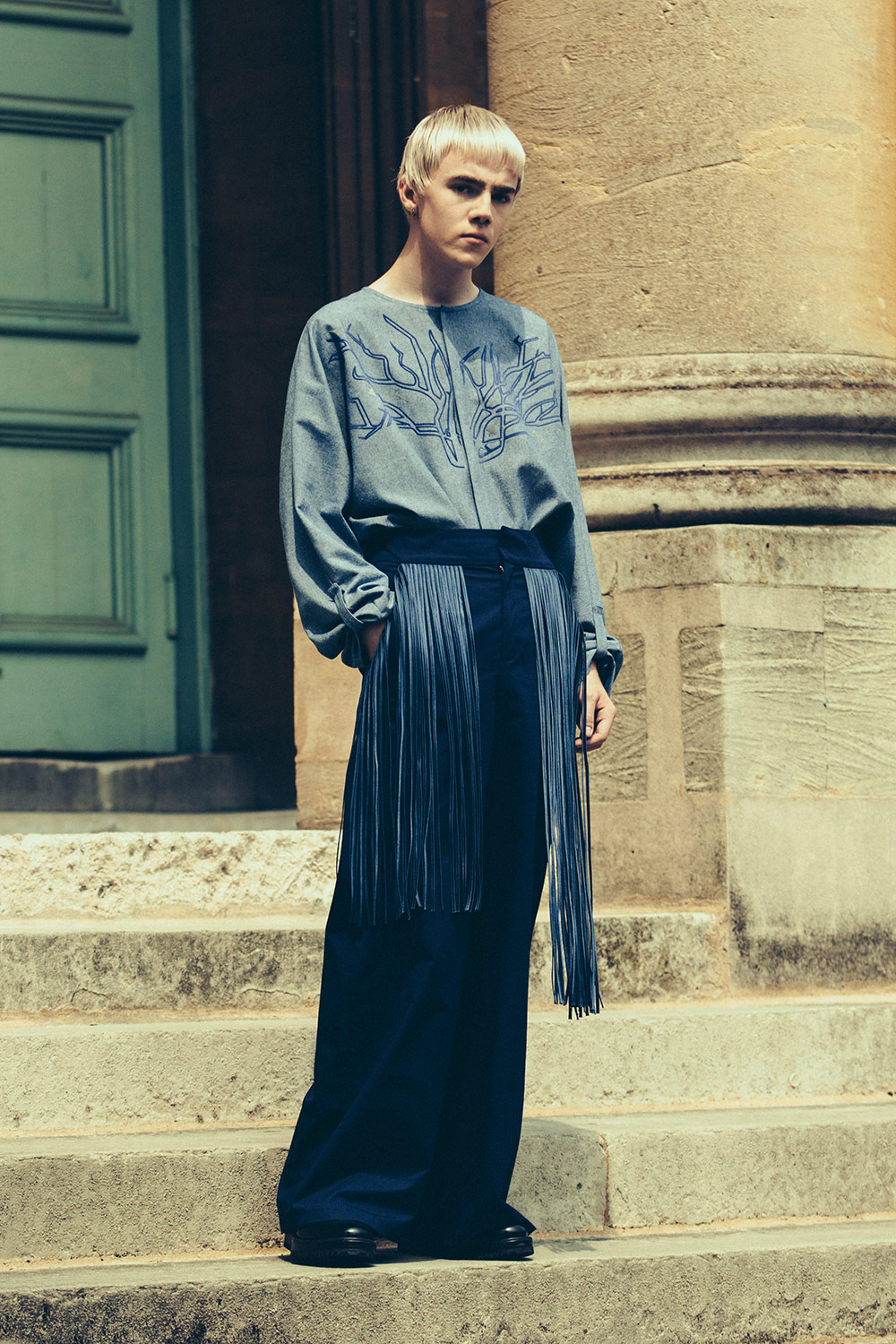