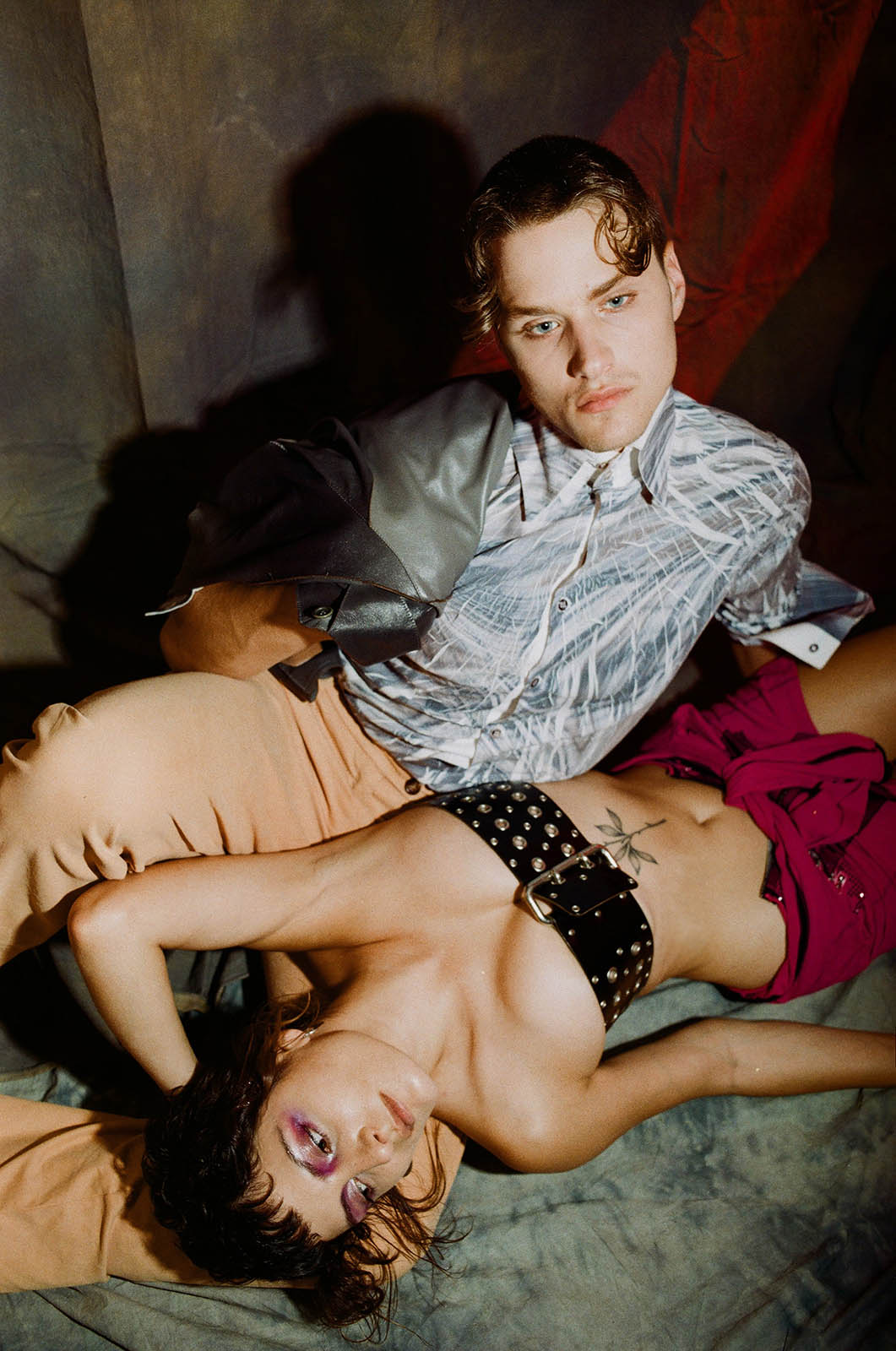 “I’m not a fucking politician and I don’t want to be… We should really look beyond celebrities, musicians to give us those answers,” writes Thoom – the artistic alias of Zeynab Marwan – on the influence of collectivism and protest within her work. Although this may not have been answering the question itself, the response speaks volumes of her character that continually questions the structures and intentions that surround her. Whilst her earlier releases contained the equally discordant, breakneck rhythms of industrial dance, Thoom’s debut LP, Pork, has a noticeably slower pacing that retains some of these more industrial sound bites in amongst hazier surroundings.
Influence is always an intricately woven affair where provenance is hard to decipher. A fine artist by training – having achieved a Bachelor of Fine Arts (BFA) degree at the School of the Art Institute of Chicago –, Zeynab Marwan took to producing via a computer in 2016 having found herself in amongst the city’s DIY-noise scene. Whilst originally from Beirut – Thoom is the Arabic name for a Lebanese garlic sauce – and currently living in Berlin, her output crossbreeds all three locales to act as a soundtrack to her own nomadic lifestyle – conspicuously so through the field recording style samples used by herself, and twins Chuck and Ike Clateman, throughout Pork.

Besides location and scene exposure, there is her artistic familial bloodline that ties closely into her work. Sister and actor Yumna Marwan (featured on the upcoming Sky Atlantic series Little Birds) shot and directed her video for حركت السكوت (No Speech); Zeynab wrote the lyrics to Shaytan with her mother whilst she has noted her grandmother’s own musical flair. Even her dad was waking her up to the likes of Dido and the Soap Kills. Creativity, and a general appreciation of the arts, appear to be a running fixture in Marwan family.

More important than any influence is the commitment and foresight to craft your own artistic vision – something Thoom appears to have in abundance. As she proclaims, “I will always do things my own way.” Released via her own label, Career Whore, her debut LP sees her serenade from the background as her spacious vocals are mixed into the shadowy crashes, off-kilter guitar loops and subtle electronic surges. By contrast to her 2017 Blood and Sand EP that was teeming with outrage, Pork’s softer, guitar-laced palette is coupled with greater introspection as if the raucous Thoom of old had been re-moulded in the space-rock stylings of Duster. Despite what some fans and commentators may desire from their favourite artists, personal and artistic growth often leads to sonic changes like these, and Thoom is a case in point. Don’t expect the same on her next release, but appreciate the album in front of you now.

Over email, Thoom talks to METAL about her craft, Pork’s new direction and her artistic lineages. Since our conversation, Lebanon’s populace has been devastated by a large explosion in Beirut – causing destruction in a circumference larger than Greater London. With the epicentre located at Beirut’s port – that Lebanon is reliant on for many imports, including food –, this has profoundly compounded the financial collapse and political unrest we talk about below. To donate, volunteer and more - click here. Furthermore, in light of these events, Zeynab has decided a large portion of the money collected from Pork shall be donated to causes helping to rebuild Beirut.

Talking music when infuriatingly unjust and sad things continue to occur around the world can often feel unnecessary. Though, you are reminded of the power of music for expressing a desire for liberation and solace from these very same things upon listening. With the situation in Lebanon appearing to escalate – your ancestral home where you have attended the Thawra government protests yourself in the past year – and your debut album release, it must feel like a very surreal juxtaposition of worry and excitement. I was wondering if you feel comfortable sharing how you are feeling during this time?
Like almost everyone I feel depressed, lonely and isolated. I’m actually very lucky to be in Berlin and not the United States or Beirut… You can feel some sense of normalcy because the government wasn’t completely brain-dead about it. But yeah, it’s hard to not go into a hole of depression and worry – for friends, family, and the future.
At the same time, I’m releasing this album on my own label, Career Whore, and figuring out what it takes to do these things. Isolation has made it easier to access my subconscious, which has been a dream for making music. But being inside all the time, I’m just talking to myself – I don’t even know what about. My life is boring; I do the same thing every day.
Collective, compassionate organisation has been something that’s been a prominent feature to anti-government protests like in Lebanon, which really help inspire futures beyond individualistic capitalism. For your creative process, you’ve noted how you originally wanted to prove you could do it all alone – something I feel many of us are conditioned to think under neoliberalism. Do these sentiments of protest and collectivism inform your work? How much does collaboration play a part in your creativity now?
When I went back to Lebanon and protested, I was going in the morning and coming back at night. I couldn't take a break and it was hard to relax. There were days when I told myself I wasn't going to protest but I would find myself hours later wandering through the streets we occupied. I completely forgot about myself and my music for a month, and I don’t think that’s a good thing either.
I also feel like people expect everyone to have answers these days, but I’m not a fucking politician and I don’t want to be, I want to keep writing songs. We should really look beyond celebrities, musicians to give us those answers. I’m not going to go to Billie Eilish, Kim [Kardashian], or Trump to harvest my political beliefs. They’re entertainers; I’d rather read or listen to people who dedicate their lives to thinking and to politics.
It’s so embarrassing that I said I wanted to prove I could do it all alone, I think it’s because that brand of feminism was popular in the last decade. Like, I think Grimes was obsessed with it. Truth is, I need a man to EQ my shit because that’s just not what I care about creatively. But no EQ-ing is fine too. I’m singing and writing, and I don’t know if I would do music if I didn’t do it with other people; Chuck has been a dream to work with.
I used to think that making music is so hard because Ableton was intimidating to me, and all these men around me were using all these effects and layering and sound design. Now I know all you need is a few things to make anything sound good. I don’t know any scales and I’m not musically trained, but I know what sounds good to me. I don’t even like music that sounds too lush, HD – that’s not what I want to hear right now. A lot of music now is all stimulation, no beauty.
Artistic pseudonyms often tell a story all on their own. What’s your relationship with garlic sauce, Thoom?
I will embrace the day Google puts me before another watered-down garlic sauce recipe. I’m second in line.

Despite my focus on Lebanon, identity is a lot more complex than one’s place of birth. Having lived across Beirut, Chicago and now Berlin, you’ve previously described your music as “aggressive arrangements” of “Arabic percussion [...] that call forth the metallic repetition of midwest American industry.” In this vein, sampled material seems prominent on Pork, perhaps most clearly with the drilling on Large Fly. What have been your favourite samples on this album, and is it possible to talk briefly about how these places influenced your sound?
To be clear, my best friends Chuck and Ike produced most of the album; I finished it how I like it but except for one song I think that was mostly me making it, it was all Chuck. Ike did a few songs as well and was involved in the process from the start. I definitely produced as well too but mostly composed and sang. We were travelling a lot together while making Pork, and we would gather inspiration as we went, but Chicago was really where it started.
This debut album sees you forego some of that intensity for softer atmospheres including your own low-mixed vocals, which I really enjoyed. Was this a conscious change of tact? What were the feelings behind your first LP?
We made Pork as a complete piece and not just a list of singles, it’s really meant to be played in one go. There’s a happy and light song about bliss and cannibalism, an angry song, a song where I learned what could come out of my mouth. But no, it wasn’t conscious, it’s just how I felt. Maybe I became happier because I was in love. And I remembered love.
I was also starting to write pop-ier songs – I’m learning as I go. I try new things, then I realize I don’t like them, then I try something else. I am always challenging and pushing myself outside of my comfort zone. I’m on a mission. I always want to access and feel as imaginative and playful as I did in Chicago, and since I have been living in Europe for the past year, I find that it’s harder to do that here, because Europe is like-come packaged bitch. American and Arab audiences are down for messy artists, not as self-aware or something. Now that I live in Berlin and I feel this, it makes me feel like an angry teen again. The new stuff I’m working on definitely has that intensity.
Finally, what do you want everyone to know about Thoom?
That I have a mission. And that I will always do things my own way. 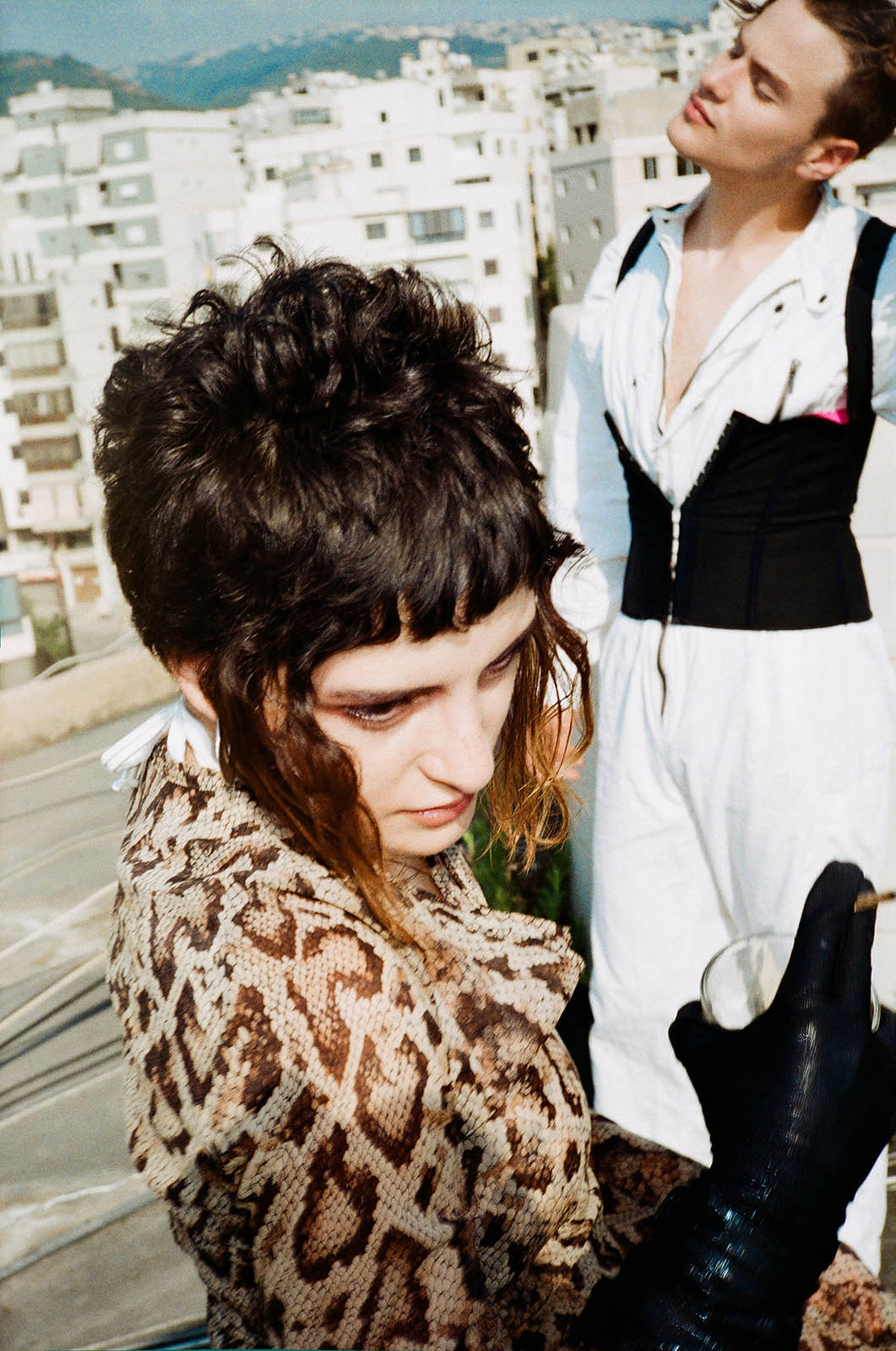 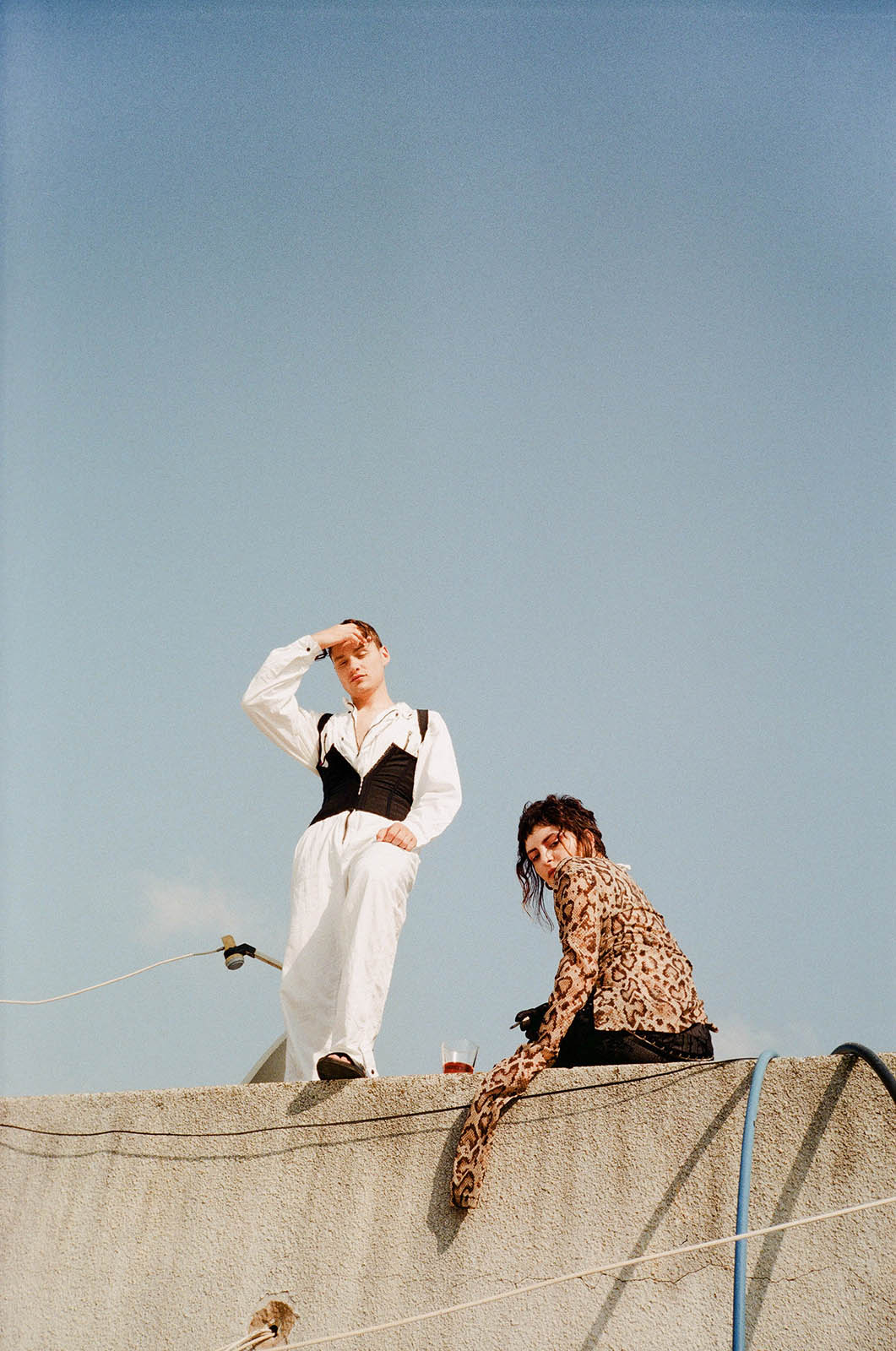 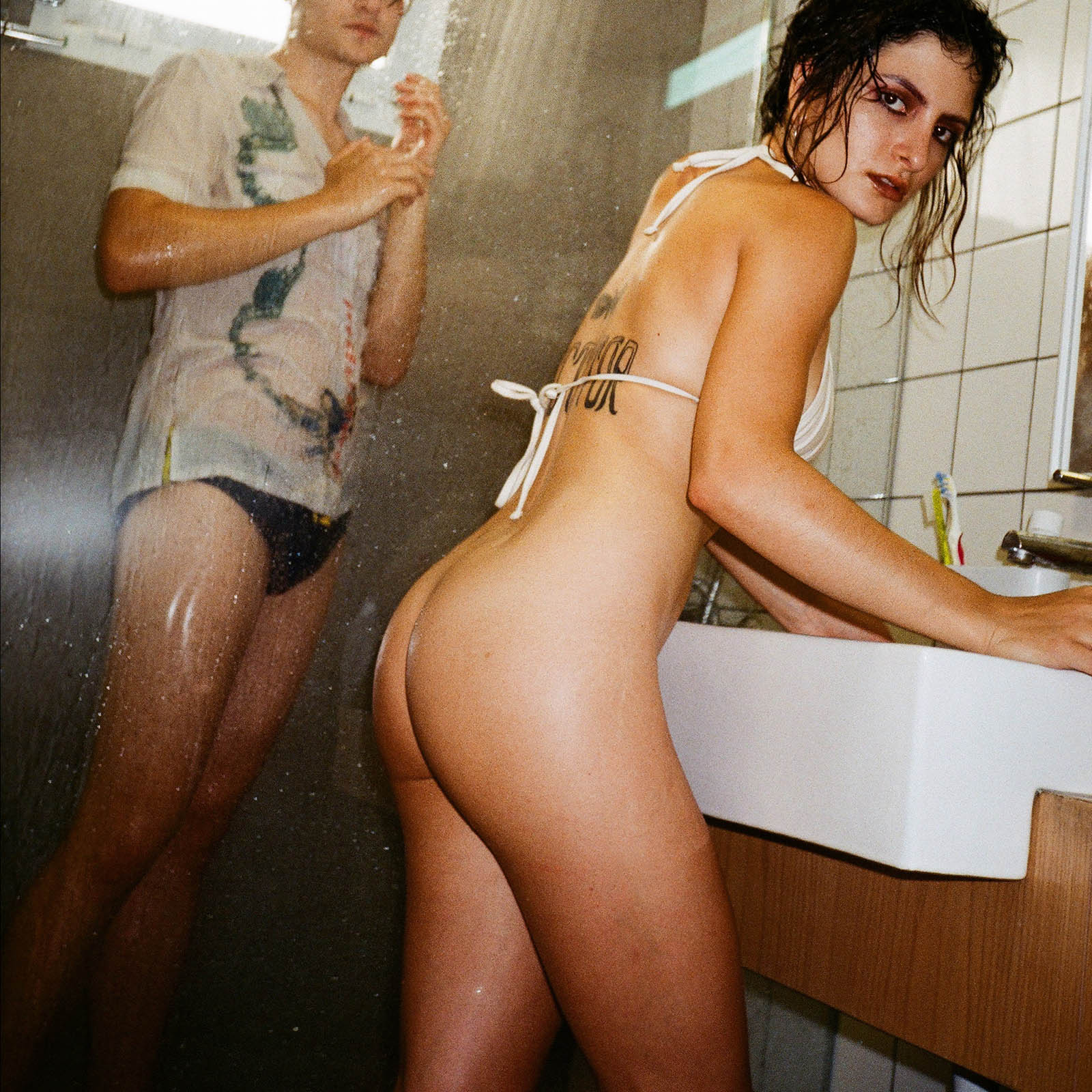