Artificial swarms in the nature 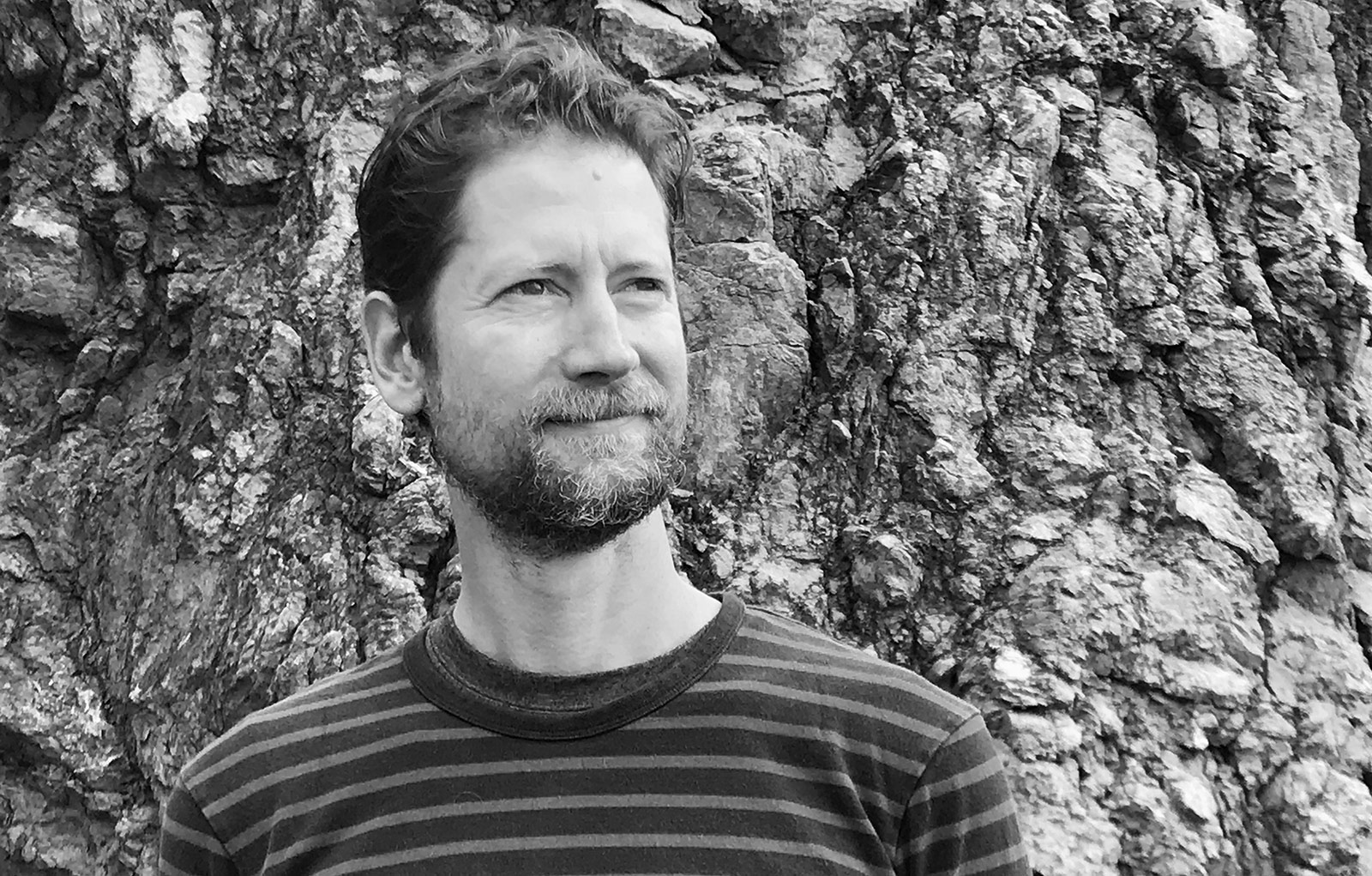 Thomas Jackson’s work is confusing but certainly also fascinating. On his photographs, beautiful landscapes are invaded by sculptural swarms of cheap and junky objects, from cheese balls to plastic bags. They are placed in nature, where they don’t belong, in a conversational way. They dialogue with the landscape, the weather, whoever passes by, and are as well ready to start conversing with you since, above all, the artist wants the viewer to interpret these mesmerizing photographs freely. Let’s go?
Who are you and where do you come from? When were you first introduced to art and photography?
I was born in Philadelphia and I grew up Rhode Island, with stints in Germany and France. I practised photography from an early age, starting in the mid-1980s with my prized Pentax K1000, but my first ambition was to be a writer. It took me about fifteen years of working in book and magazine publishing in New York City to get that out of my system. I’ve been a photographer ever since.
Your Emergent Behavior series is impressive, I’ve never seen anything similar. What inspired you to start it? Could you tell us a bit about its concept and the process behind it?
Emergent Behavior started more or less with the notion of making and photographing an installation made from stuff I found on the ground. I envisioned a sculpture that would be of the place, yet be utterly, hilariously incongruous at the same time. So I gathered up a bunch of shattered shipping pallets on a street in Brooklyn, made a sculpture from them, and then photographed it in the same location. After that, I moved on to leaves, then cheese balls, then cups and plates and beyond.
It wasn’t until I’d made the third or fourth image in the series that it dawned on me that I was making swarms. With that realization in hand, I had all manner of natural organizational systems to look to for inspiration (schooling fish, murmuring birds, etc.). From there, the series coalesced quickly. 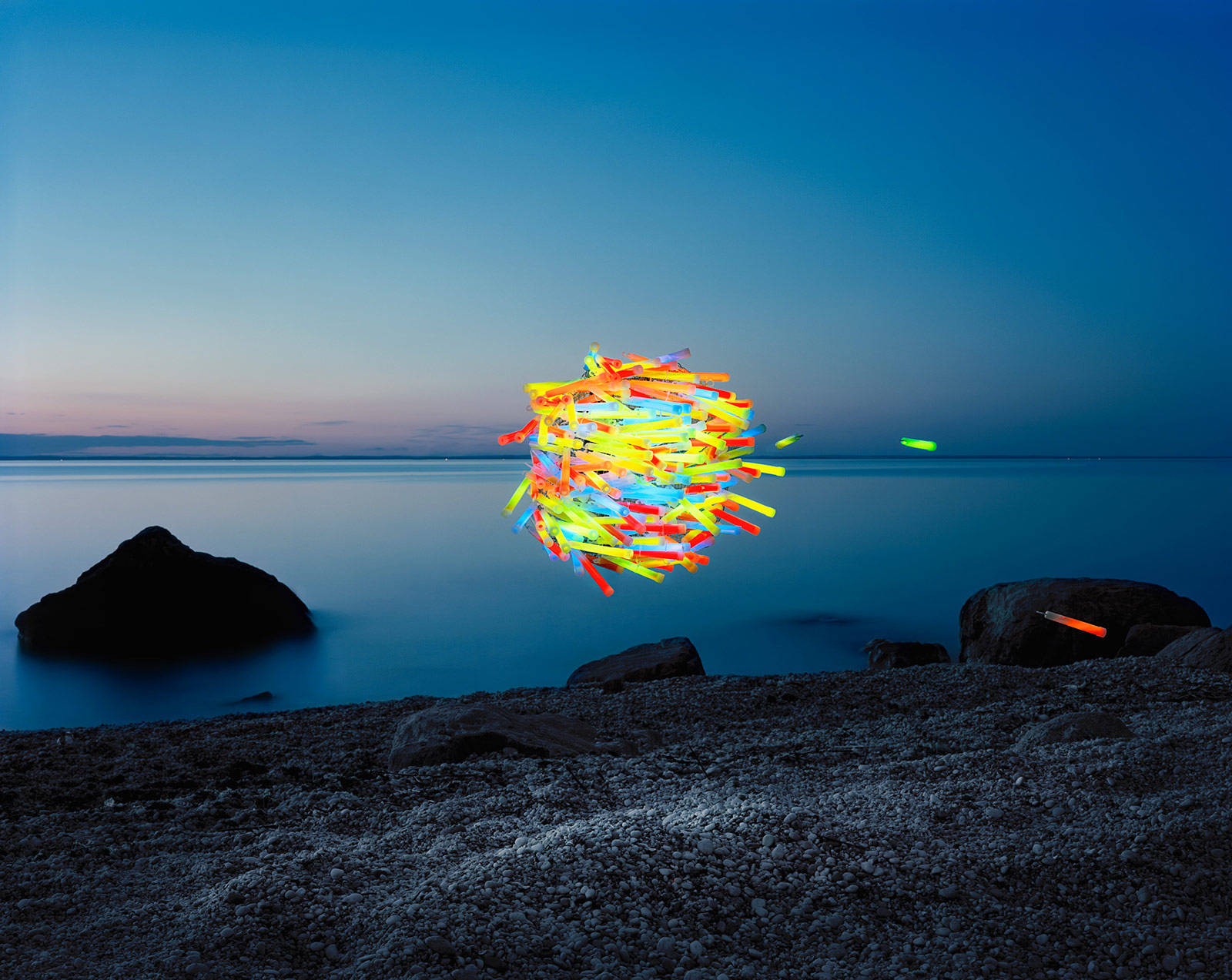 In your photographs, you reinvent everyday objects placing them in nature, where they don’t belong, in a sculptural and conversational way. Usually, is there a concept behind the objects you choose and the way you compose them sculpturally?
I look for a few different attributes in an object. I want it to be as cheap and junky as possible, but I also want it to be iconic. It should be instantly recognizable and loaded with associations both positive and negative. Things like solo cups and cheese balls and plastic bags. I also choose things based on how easy to work with they’ll be as sculptural objects. Once I start to put them together on location, they take on a life of their own, shaking off their established meanings and becoming something strange and new.
What’s your favourite photograph you’ve taken till today? Why?
Cups no. 2. This was one of the first images I attempted in windy conditions. Up to that point I had assiduously avoided wind, but I found myself on the high plains of Wyoming and there was no way wind wasn't going to be a factor. I attached the central cups to a wire armature so they’d have some stability, then strung numerous other cups to monofilaments around the margins, which whipped freely in the wind. While this piece shares many of the aesthetically pleasing characteristics of the other images, it also has an explosive, pissed off quality that is all its own. 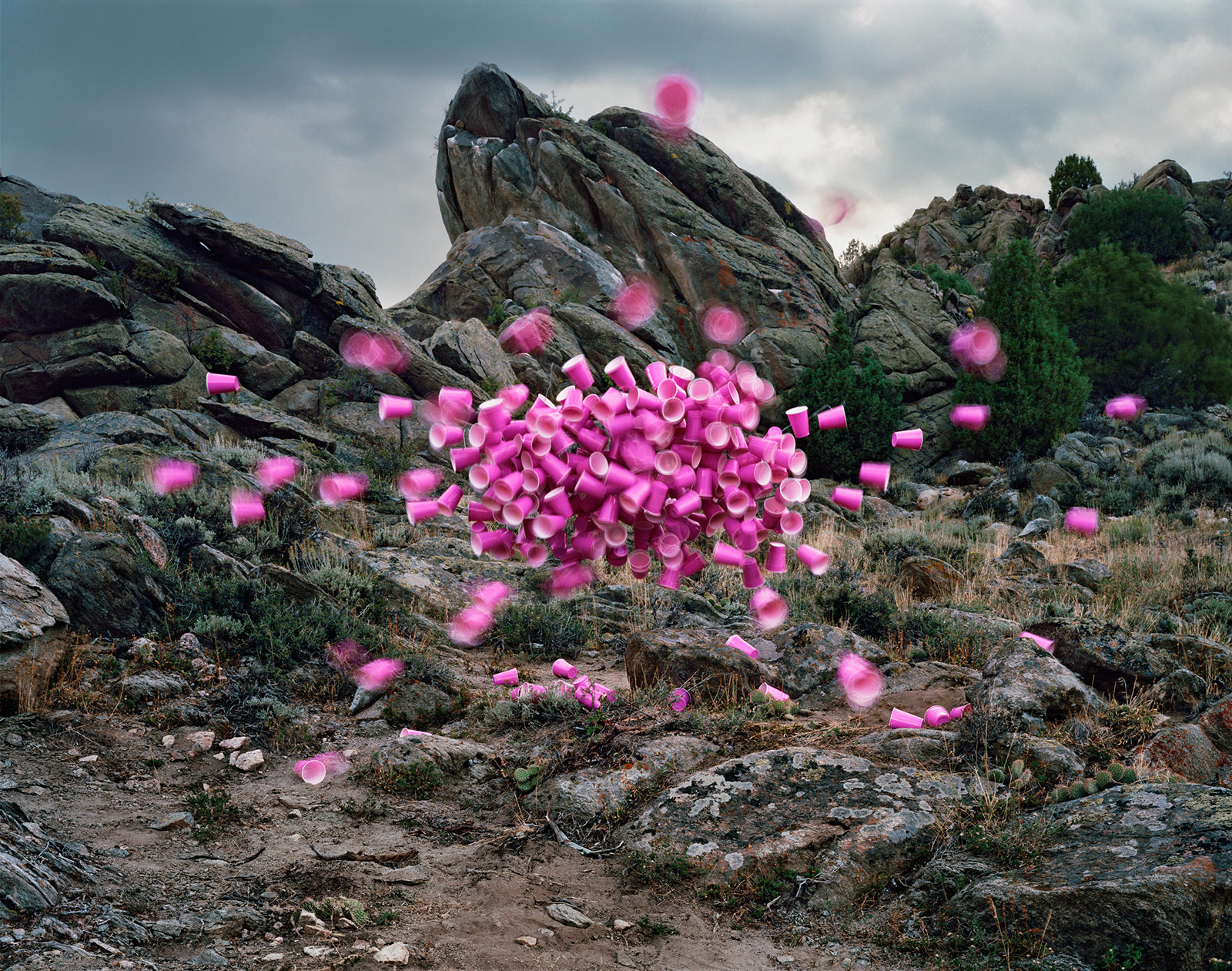 How do you deal with natural factors, like rain or wind, while photographing in nature? Are those natural surprises helpful or do they ruin your work? And what about people or animals that pass by? Are they disturbing or do they feel disturbed by your sculptures?
I try to use different weather conditions to my advantage. Some installations are designed to be photographed in windless conditions, others are designed to move. Sometimes the weather doesn’t behave the way it’s supposed to, however, and I have an exhibition’s-worth of failed images to prove it. Animals haven’t given me too much trouble, but people can be a distraction (though only in the nicest way). Usually, I ask my assistant to talk to them so I can keep working because each of these shoots is a mad race against the setting sun.
Besides the photographs, sometimes you exhibit also installations of your Emergent Behavior sculptures, but always indoors. Have you ever considered taking those exhibitions outdoors so that the public could see your photographs come to life?
Every one of my shoots is an outdoor event to which the public is invited. The problem is that I don’t actually invite anyone. Perhaps I should re-think that.
I’m sure most people, when looking at your work, are confused at first and have absolutely no idea how you’ve done it. In a way it looks very natural, but in the other hand, it feels artificial and even surreal. Do you use Photoshop or other computer softwares? What’s the trick to achieve those impossible images?
For the first few images in the series I used Photoshop quite liberally. Over time, however, I have devised techniques that have allowed me to eschew retouching altogether. When you look at my prints from viewing distance, the installations appear to be hovering, but upon closer inspection, they start to reveal their secrets. Take a few steps back and the illusion reasserts itself. 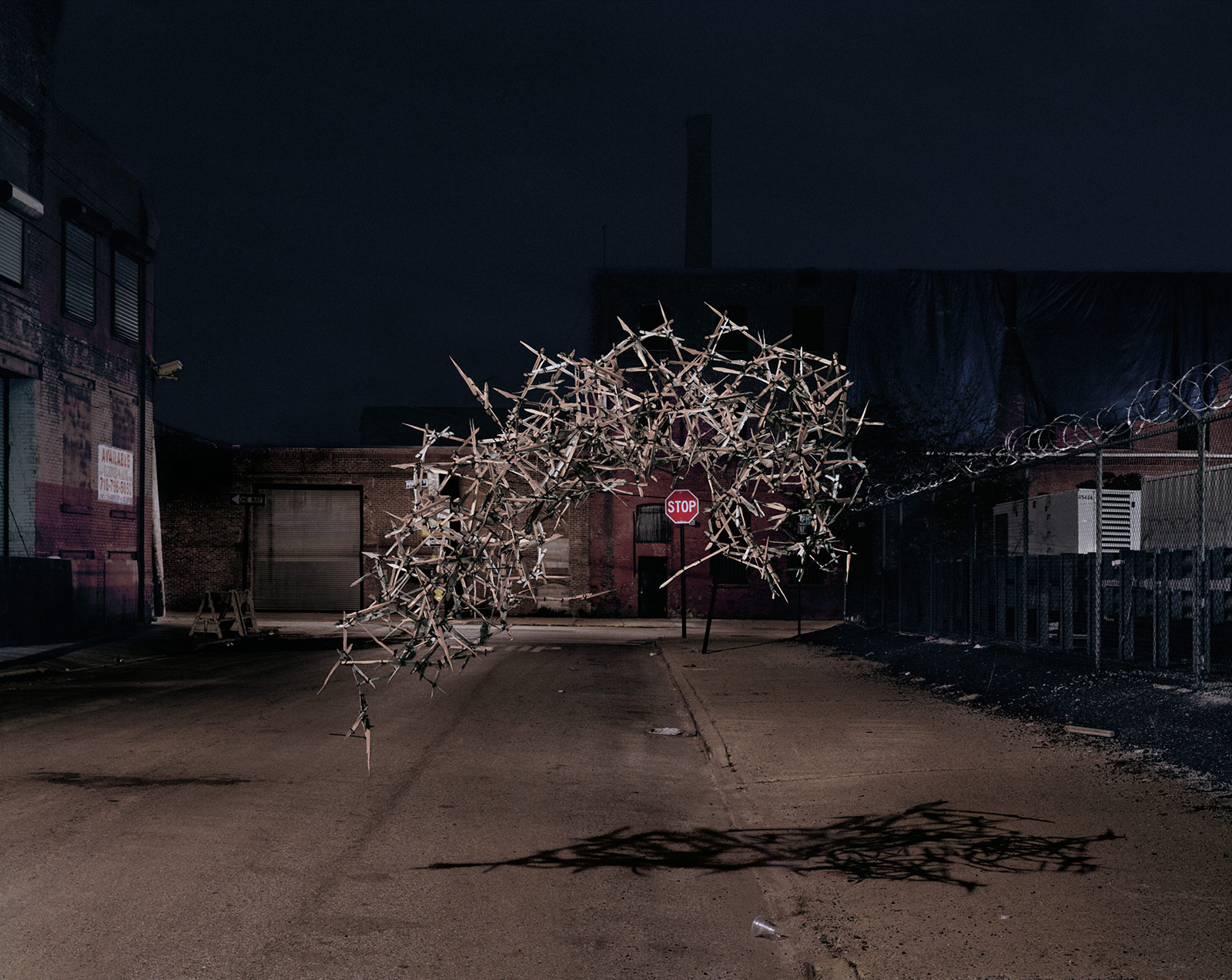 How do you expect the relationship of the viewer with your work to be? What feeling do you want to evoke through your pictures and installations? Is there, at any time, a political or social message behind them?
I want the images to be pleasing and discomfiting at the same time. I want the viewer to find them beautiful, and to feel a bit guilty as a result. There is certainly an environmental message in play, though I like to think it’s delivered in a sly, satirical way. Above all, I like to leave things as open to interpretation as possible.
Any exciting plans for the future? Where do you want to take your photographs and installations next?
Right now I’m working on a new series that’s loosely inspired by charts, graphs, maps and other man-made organizational systems. As for how it will evolve your guess is as good as mine. 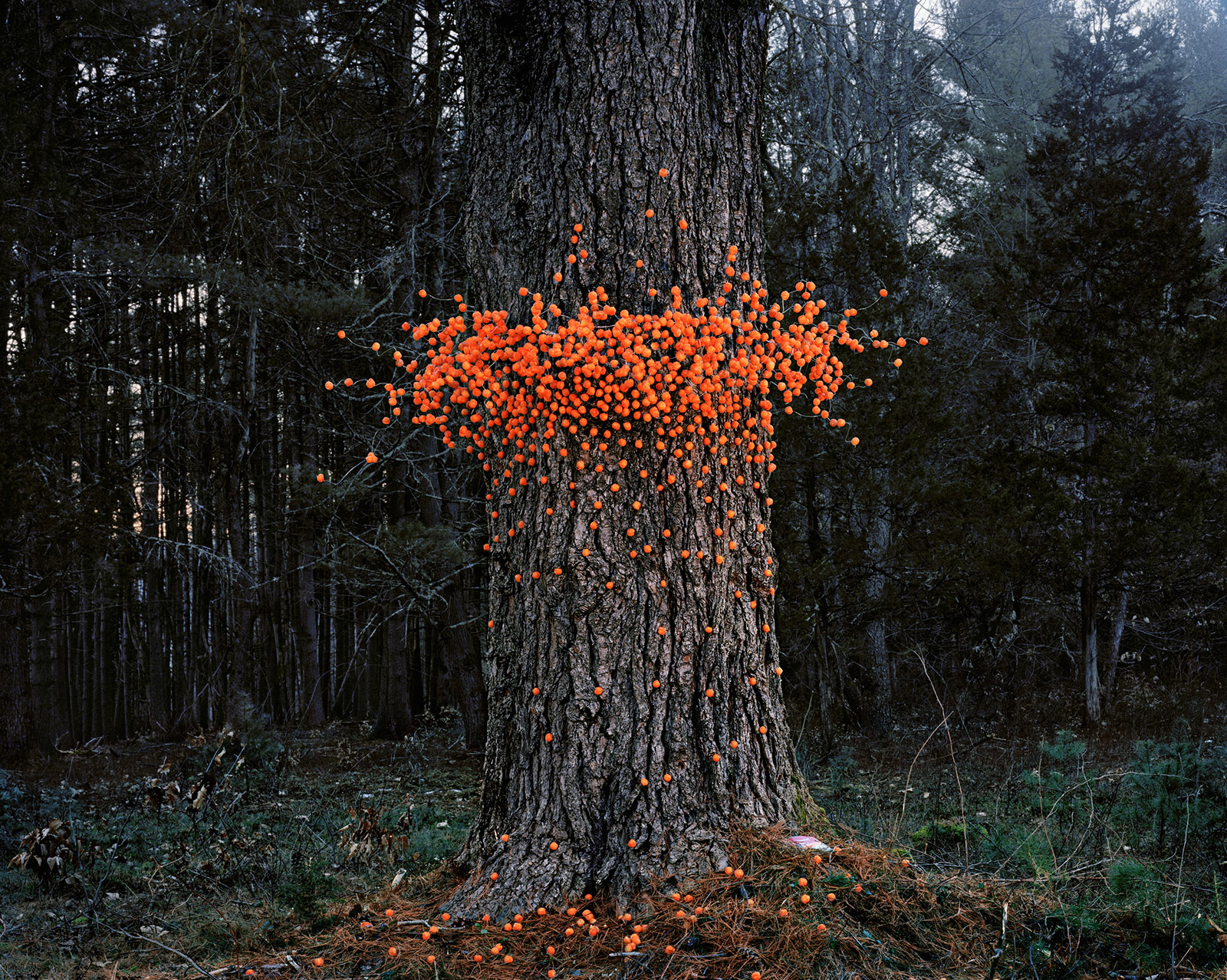 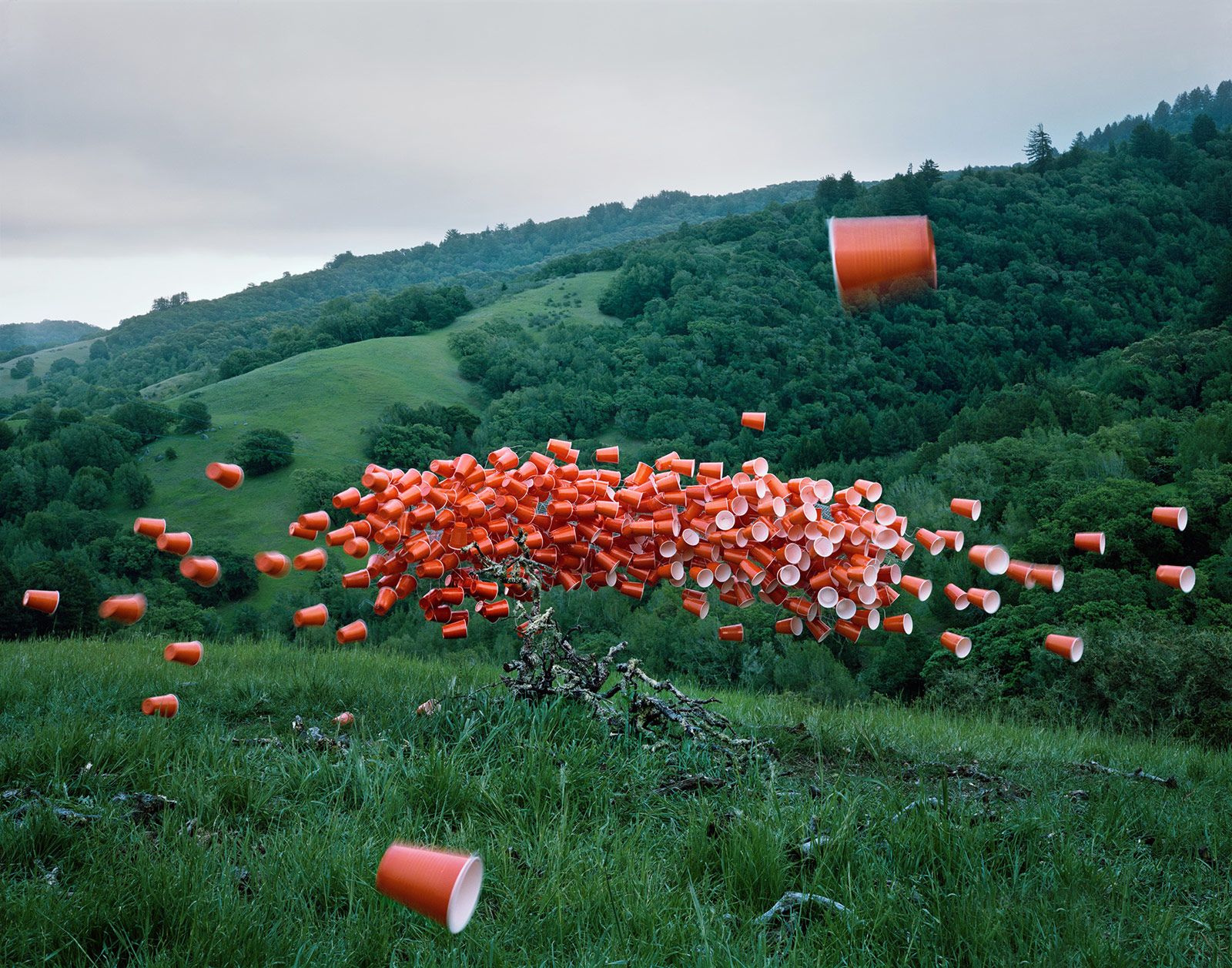 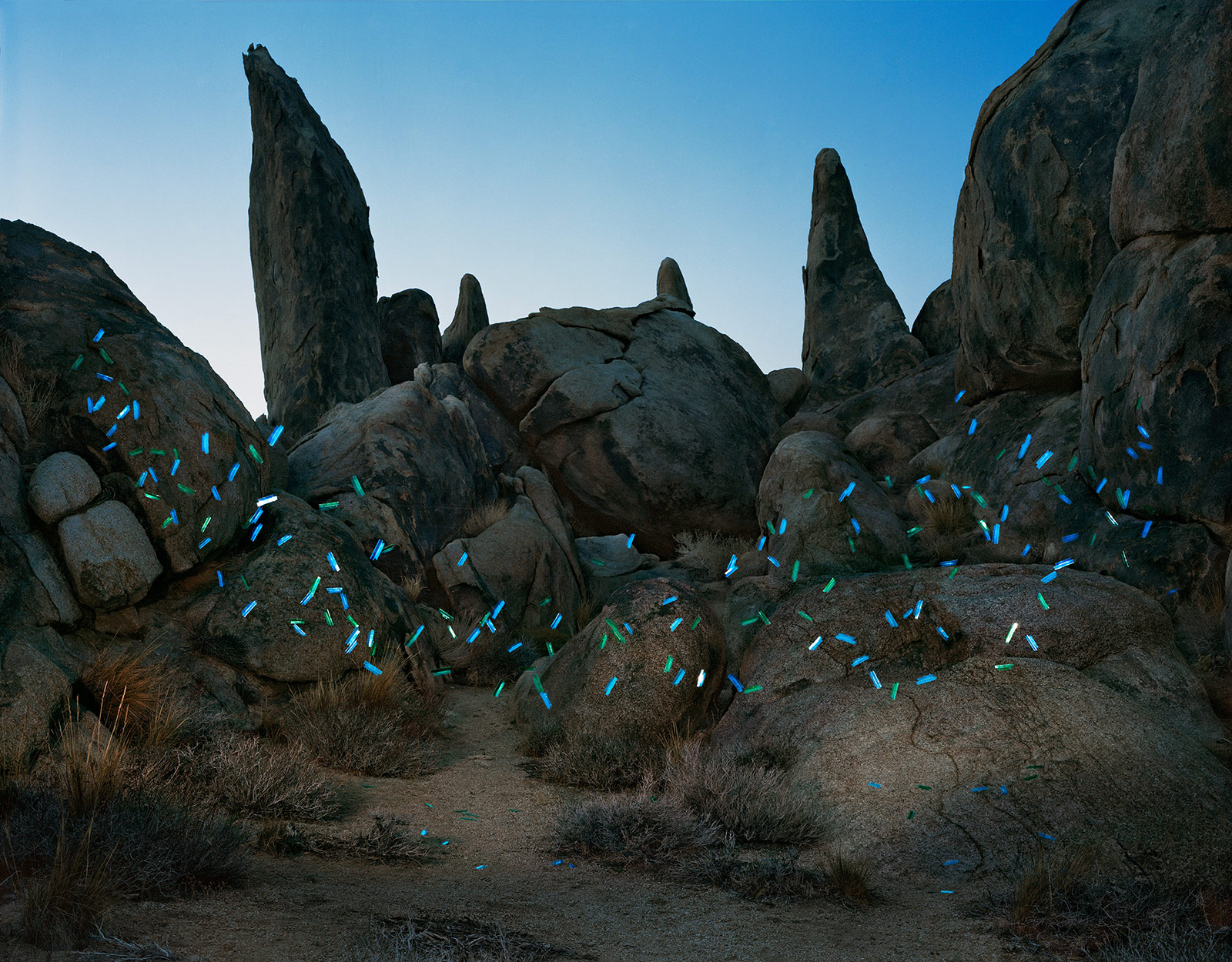 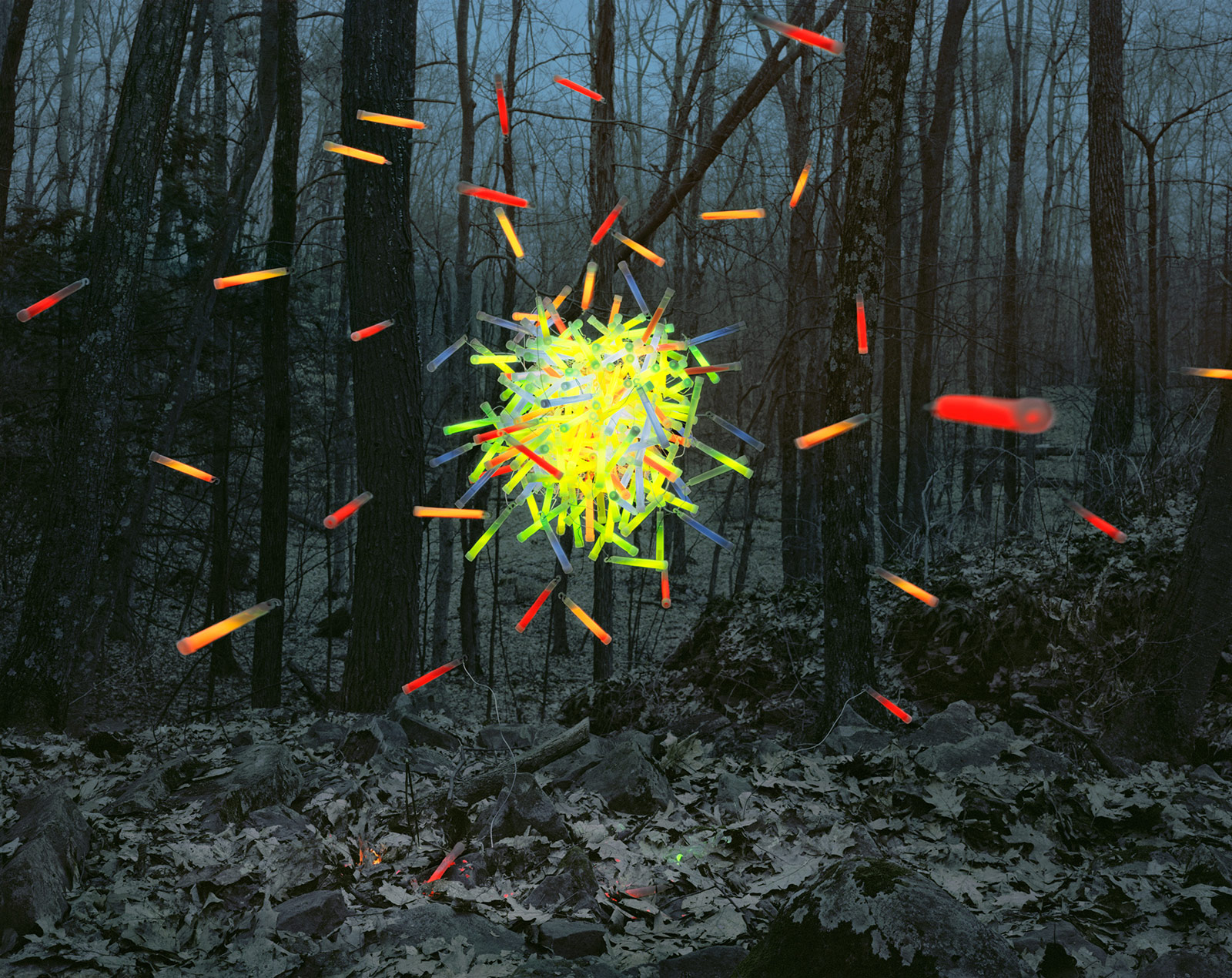 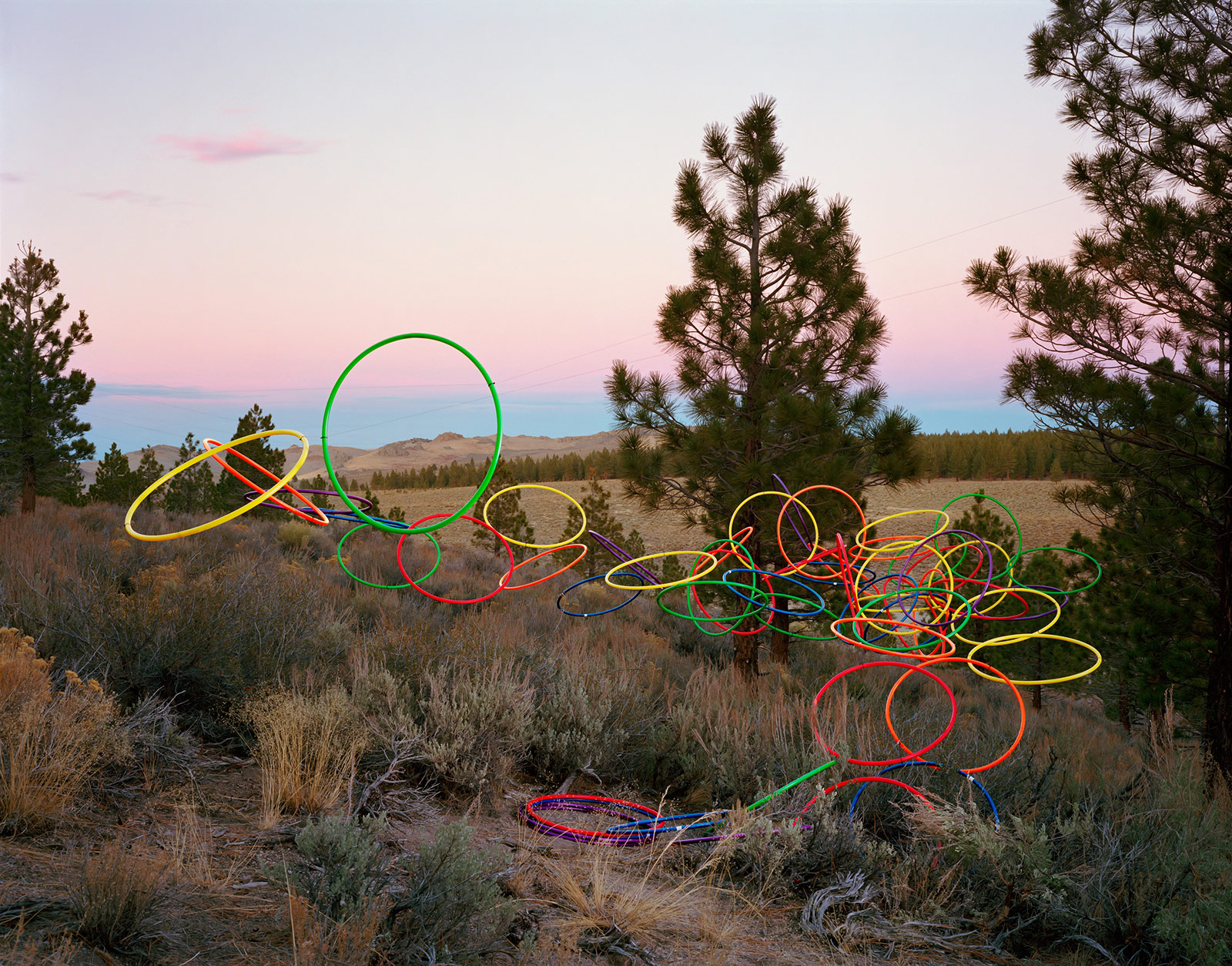 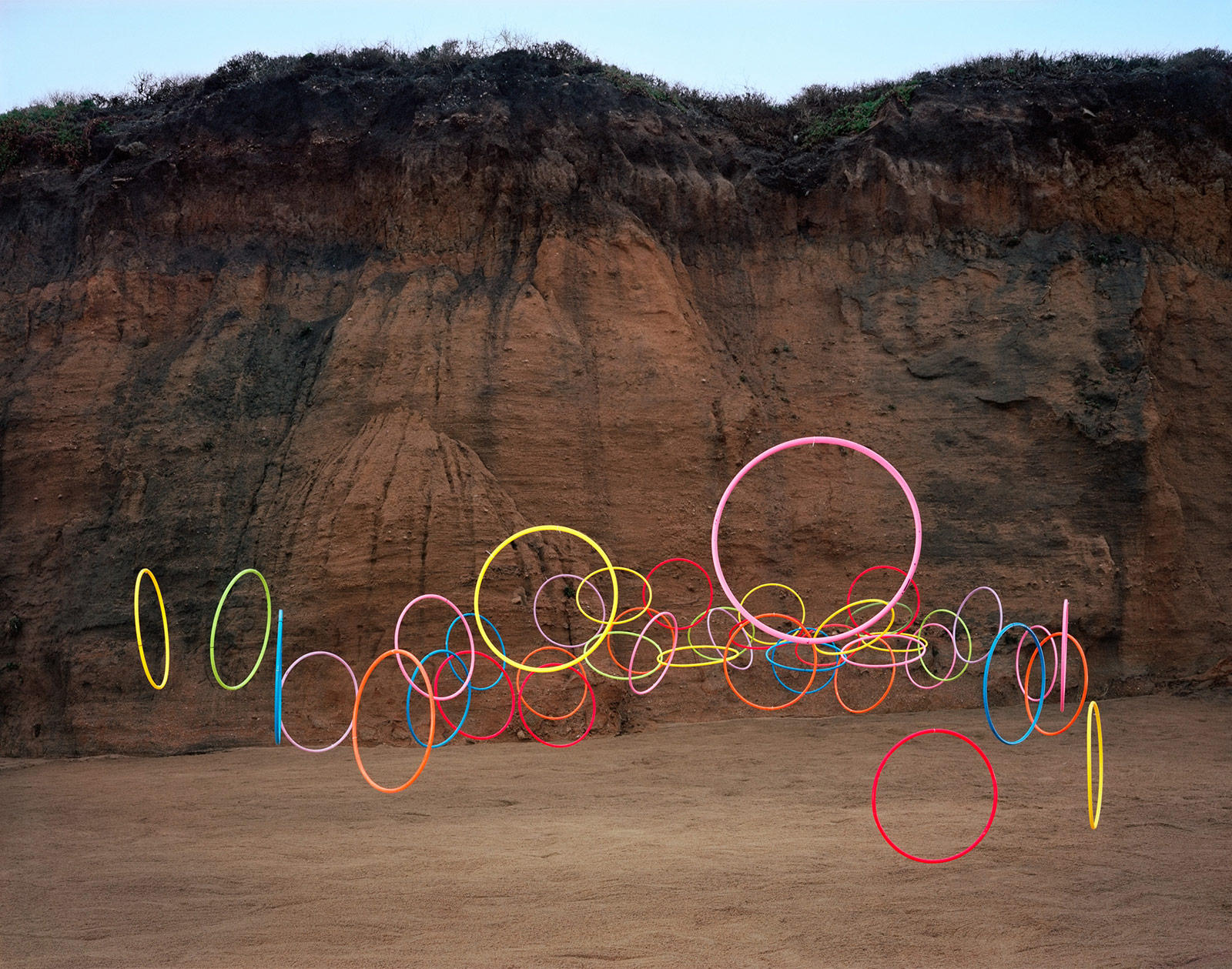 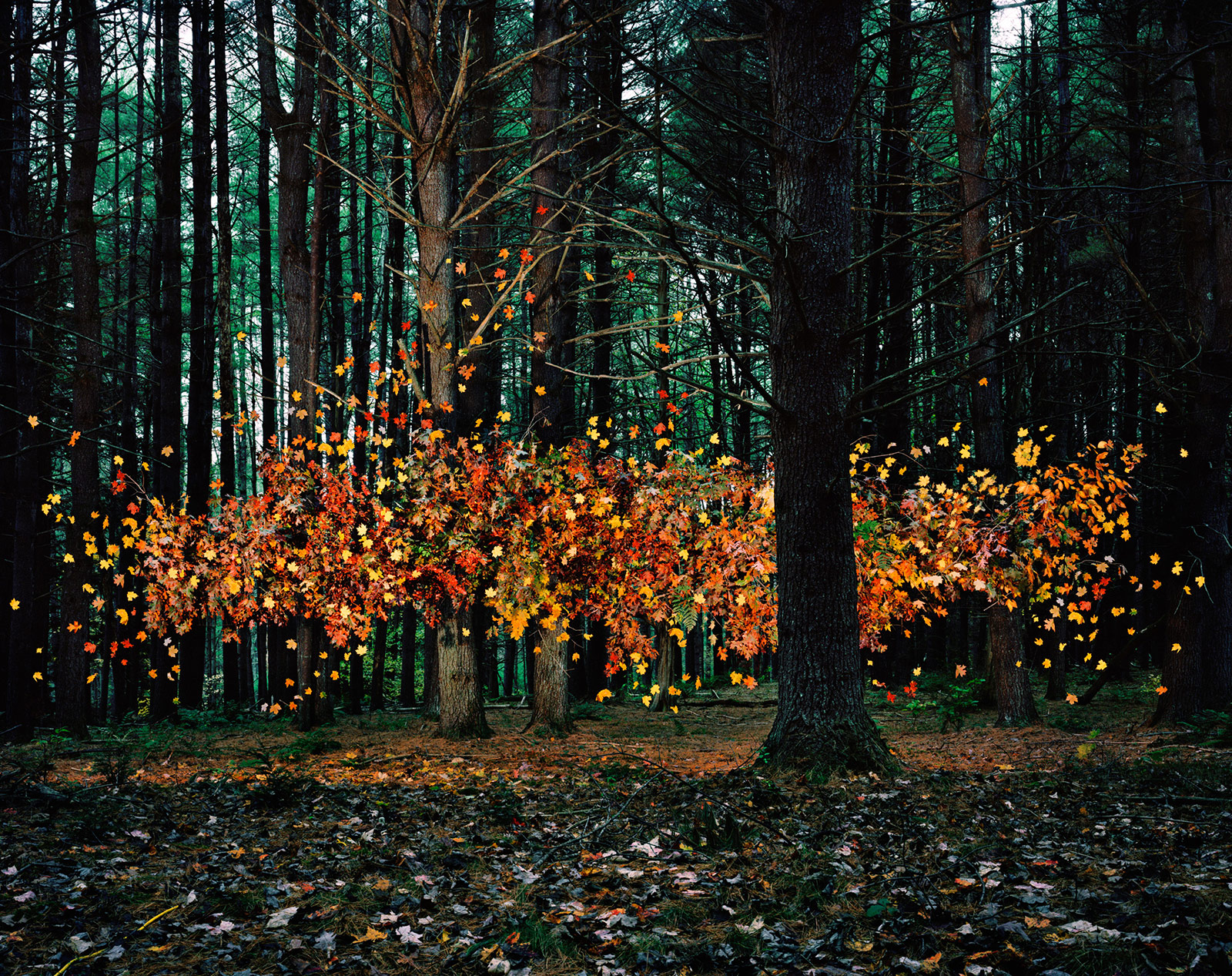 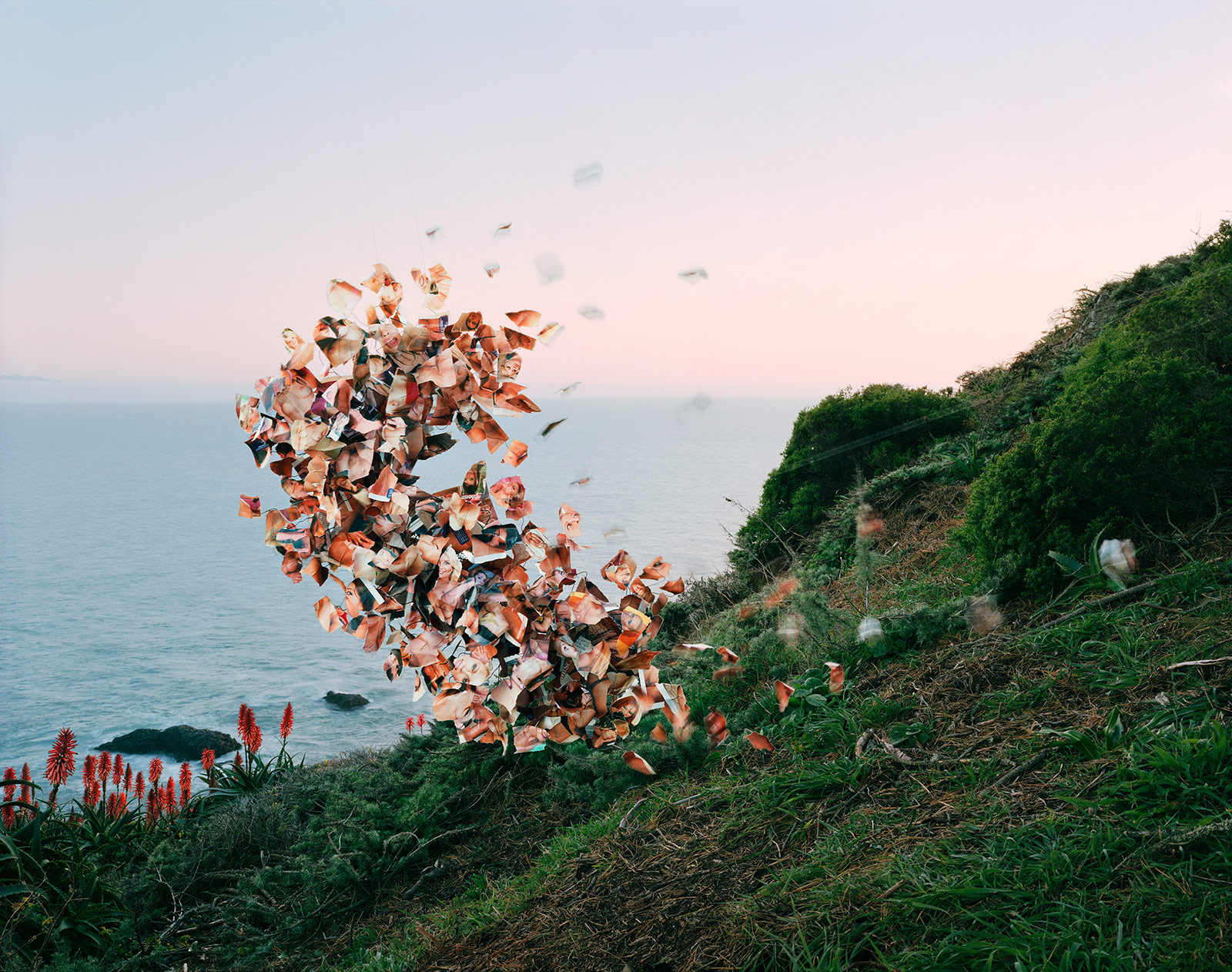 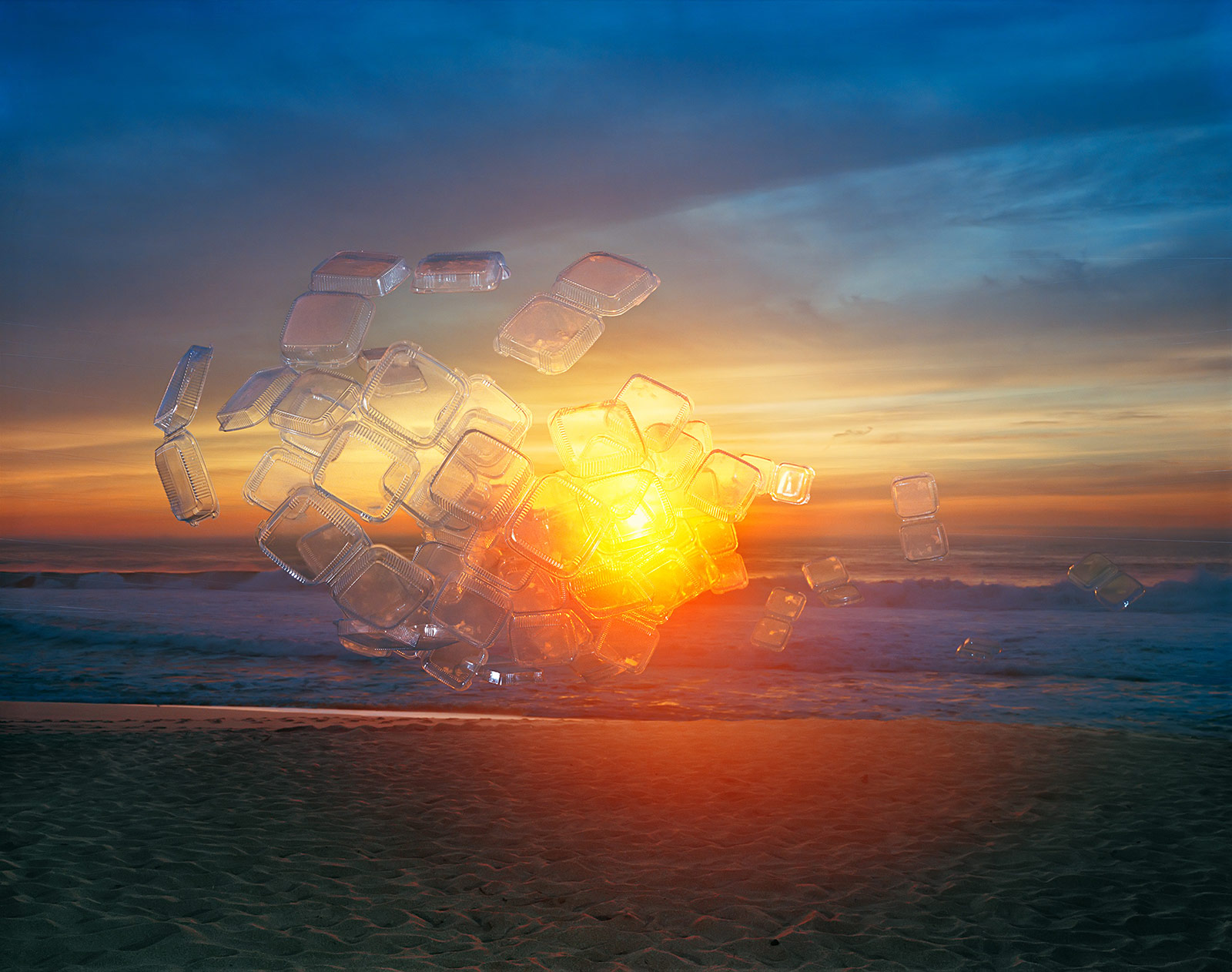 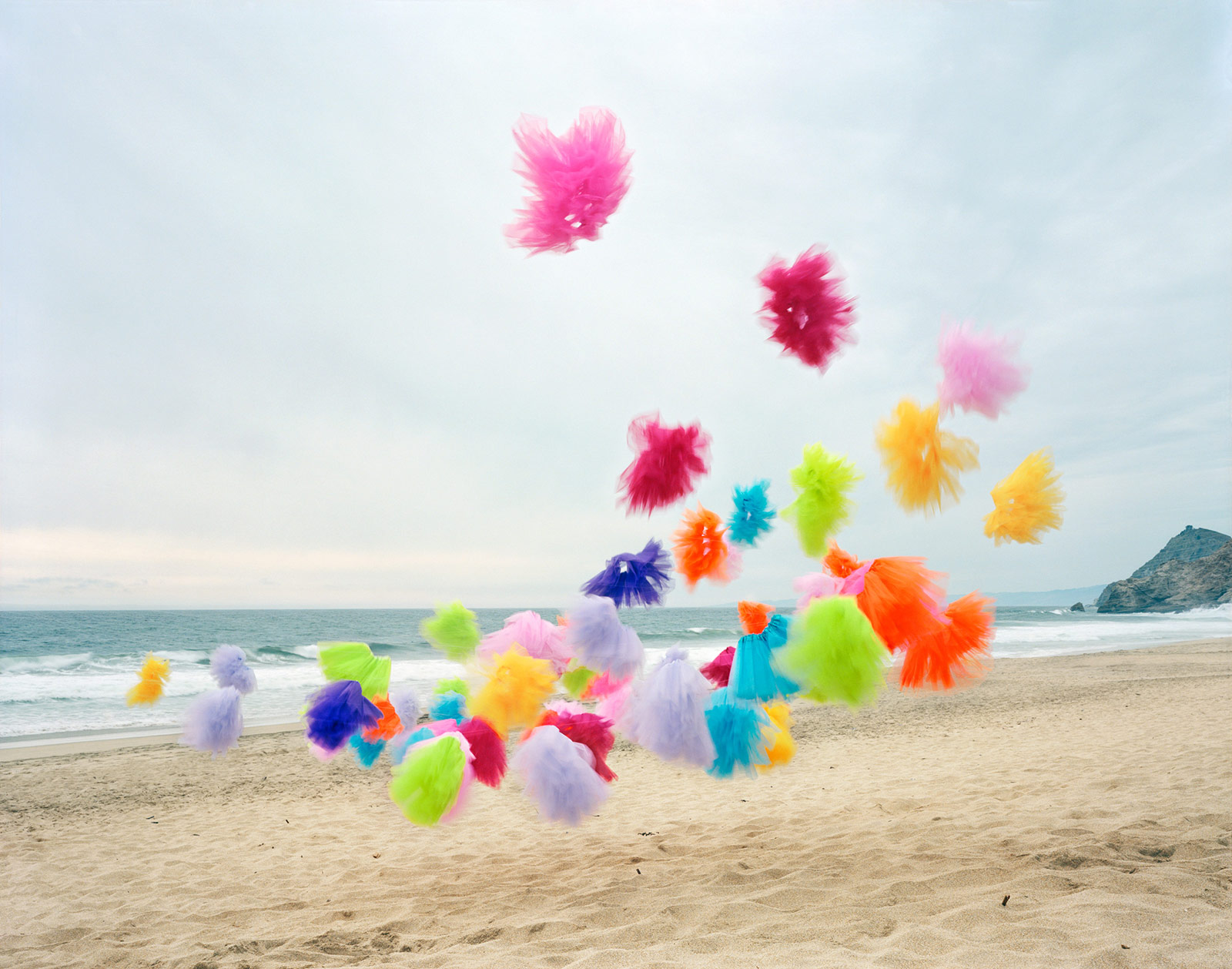 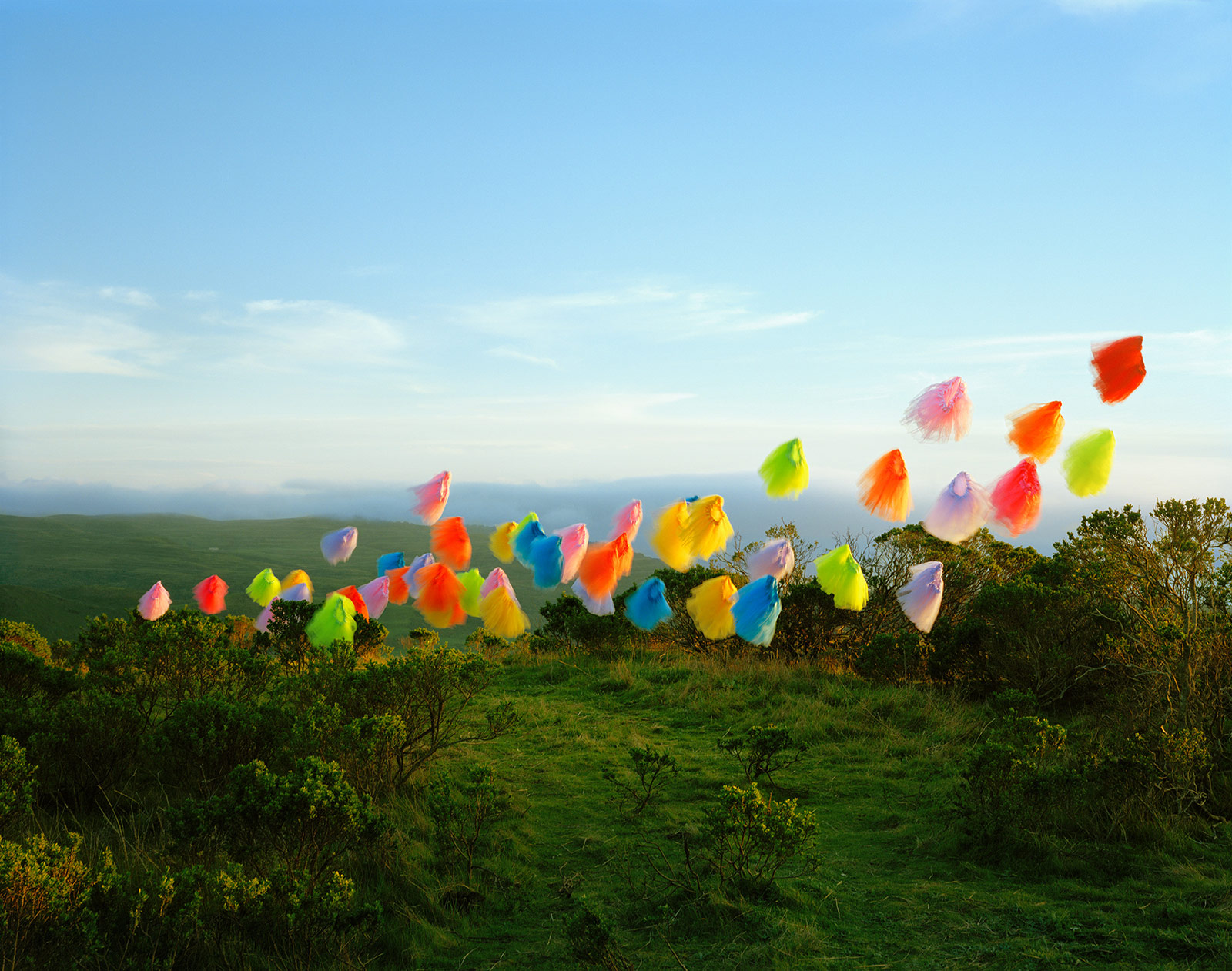 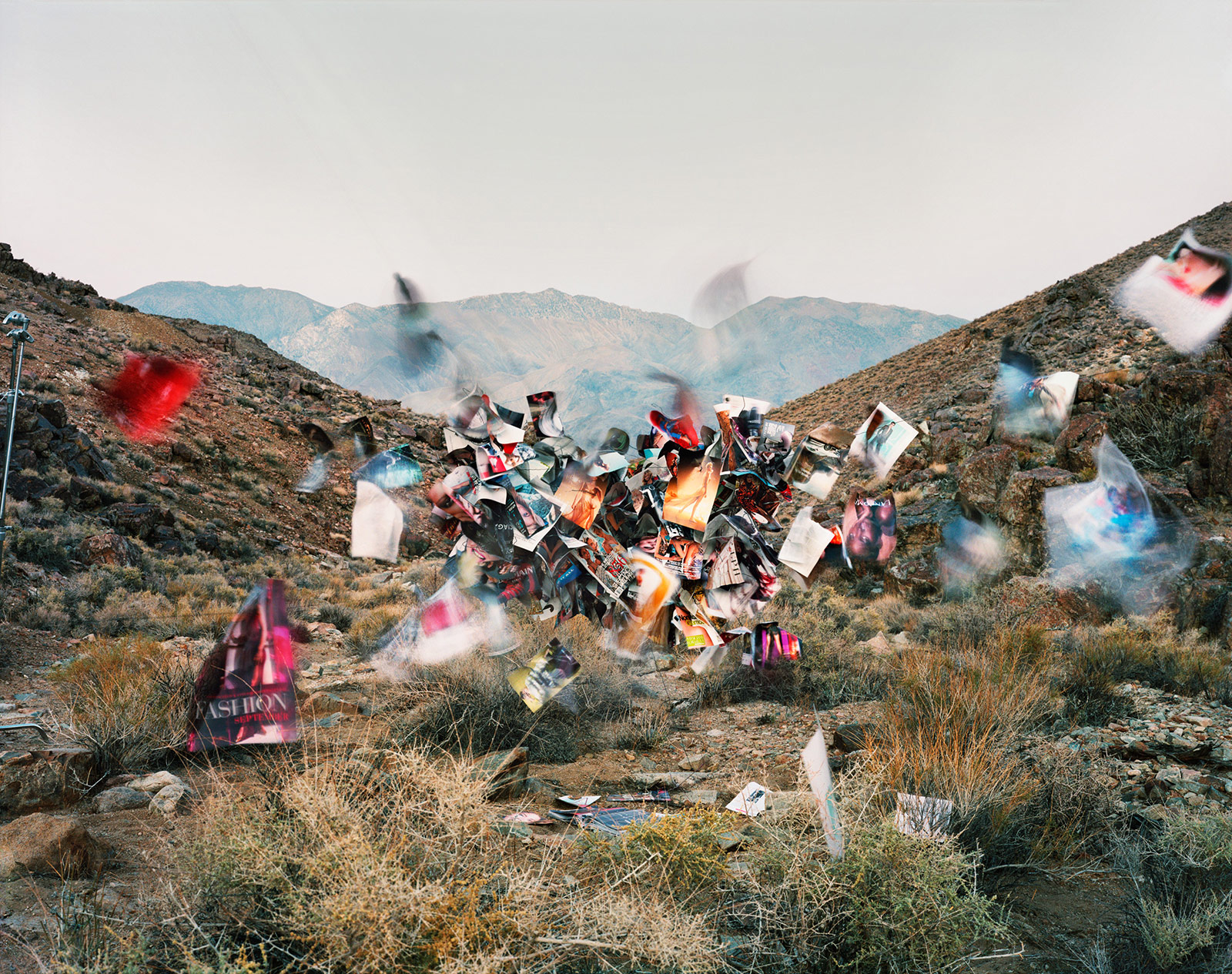