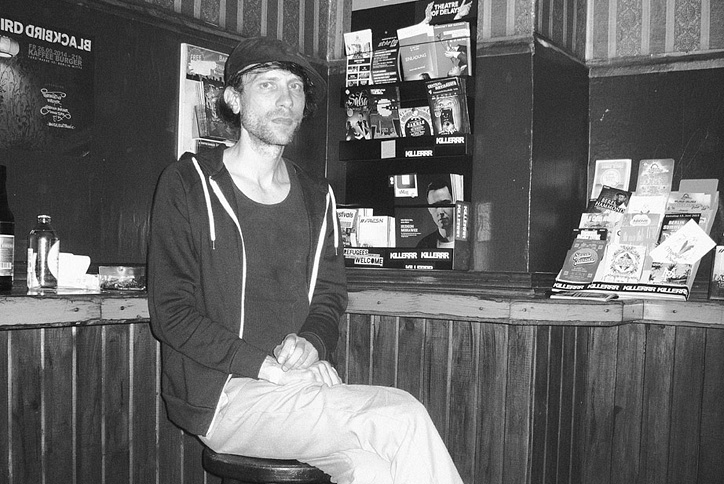 Andy Grier, current frontman of THIEVES LIKE US, is a guy sort of skeptical to interviews –“is this going to substantially change anything in the universe?”, he asked me beforehand. He is working in a new album, the first one since they released Bleed Bleed Bleed in 2012. We catch up with him after a fantastic gig in Berlin at Torstrassen Festival: a 4-piece outfit without backing tracks, solid live pop, electronic performance with many post-punk touches, tossing clean guitar choruses and delays, courtesy of the new band member, Manchester-born Chris Kelvin. Here is what we talked about after they wrapped it up. Whether this conversation is going to change anything or not, I leave that up to you guys.

Are you working on a new record?

Yeah, I think the band needs to reach a new level. Strangely, pop music is very accessible. We play in places and people show up, but I think there are different levels of organization and other bands have a manager and a proper PR agent and we always sort of did everything by ourselves, which is good and bad. It is not like a large business machine. We still are in some DIY level. It’s sort of a paradox, if we were a punk band maybe it would have more sense, but we play pop music.

I guess your record label Capture Track helps with that.

They are always in Brooklyn, currently working with artist of the likes of Mac DeMarco and The Soft Moon.

The band has been through changes, I believe.

The last record kind of vanished and some members quitted.

Are they a couple of Swedish guys?

Right. I think it is exhausting, you put a lot of work and they were tired, I guess, of not reaching that professional level from a business stand. We do extremely accessible pop music so, like I said, there are some contradictions.

Although you did some hits such as Drugs In My Body.

Yeah right, and Shyness is really big too. But we didn’t push really afterwards. Still, people order t-shirts from all over the world. I think initially, when we started out, we thought we could make club tracks and a kind of sensitive, danceable pop music. The problem about making club hits is people want to hear the same thing and you get stuck in that.

You did that in Kitsuné.

Yeah, it didn’t work that well, they wanted to hire like a producer and wanted us to sound in a different way than we wanted to sound.

Are the new band members involved in the songwriting?

No, I wrote everything and then I had to find musicians to work with, which took a while.

How does the new project feel?

Now it’s good. I think I wrote ten songs and then went to find the people to play them with.

What are the main differences between your previous work and what you do now?

I think we were never a good live band before, we were just making songs without thinking about how to play them, and now it is the opposite. Now we play without any backing track. If you play with too much computer help the sound is bad, it is much harder to play that way instead of doing it with traditional instruments. And then the sound is fucked up. I guess it is more real now. It is not that we want to do a Motown thing and record the whole band in one room, but sort of an electronic organic thing, like they did in 80’s.

Me myself, when I came to see you tonight, is not that I was expecting anything in particular, but perhaps I was surprised to see a live assemble, without backing tracks or sampling.

I think some people are confused because a lot of our former records are produced in sort of a hip-hop kind of way. People may like it or not, it is hard to get the balance.

Any dates for the release of the new album?

We’re going to have it ready by the end of summer, probably. It should be out by the end of the year. Now vinyl pressing is about four months wait.

Are you planning to release it together with the same record label?

It can change. It is a bit annoying you give someone your work and they give it away. Sometimes smaller labels can do more work and it can be even better. I want to decide, because I don’t want that to happen again, I’m trying to communicate with people. Now I have the wisdom and experience.