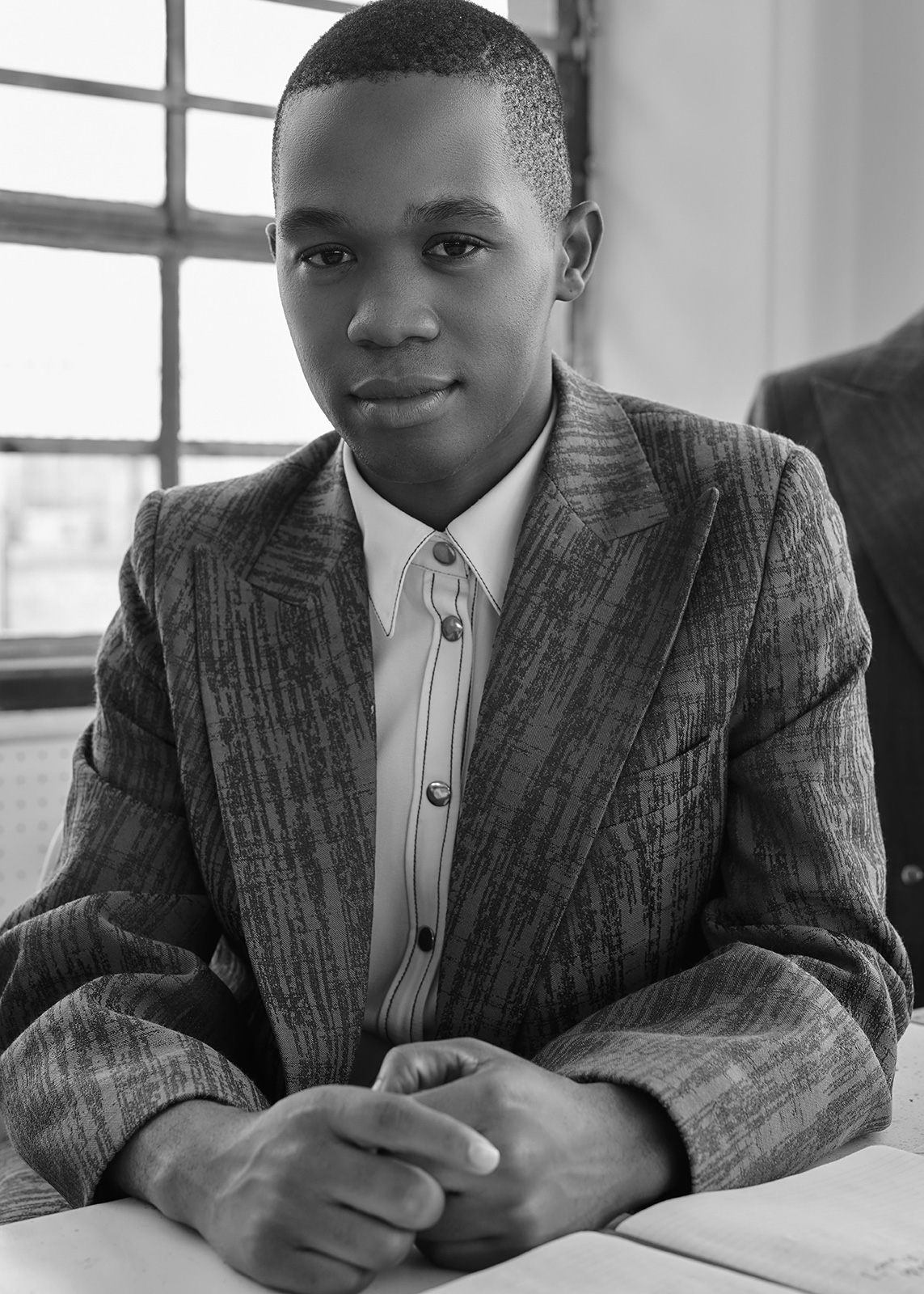 Since exhibiting his LVMH Prize winning installation in 2019, Thebe Magugu has taken the industry by storm with his subversive vision embodied in the equestrian clothes he creates. For his first full menswear collection, Magugu was featured as Pitti Uomo’s special guest designer earlier this summer, following in the influential footsteps of creatives such as Jil Sander, Y/Project, and Raf Simmons.
Built from two deeply political books – especially Mandy Wiener’s, The Whistleblowers – and the controversial cartoons of South African political illustrator Jonathan Zapiro, the eponymous label’s Spring/Summer 2022 collection was a mosaic of Masai check, bloodied trenches, felt Stetsons and bowler hats adorned by the brand’s sisterhood emblem, and came equipped with Magugu’s first ever men’s cowboy boots.

Dubbed Doublethink, in reference to George Orwell’s cult classic dystopian novel, 1984, the collection served as a medium to communicate the cataclysmic corruption that holds a tenacious grip on South Africa, Magugu’s homeland. However, it also celebrated the courage of whistleblowers who bring about powerful change, often at a great personal cost, never once losing the fundamental wearability of each garment.

The tale told by the models who were seated in a conceptual police station, intermittently waiting or operating a payphone and then one by one stepping into an interrogation room while pre-recorded testimonies played over the PA, is immediately evident as Magugu is one of fashion’s great storytellers. He has proven himself proficient when it comes to creating completely immersive productions with the kind of visual impact that doesn’t require much explanation.

Magugu’s contemporary take on wild west aesthetics, deeply influenced by paradigmatic cowboy iconography, invited us to see inside the catastrophe of familial sovereignty, bureaucracy and violence in his native country. Through the use of pronounced blacks and whites the collection displayed a reductive dichotomy of good versus evil.

The designer’s commitment to cultivating South African artisans through collaboration, and his similarly strong admiration of African culture and history, makes it impossible to ignore that Magugu is one of fashion’s most political practitioners in the wasting world we inhabit.

What can you tell me about the experience of creating your first full menswear collection, straying away from your usual womens designs?
The female body, with its darts, flatter zones and dimensions, is all I have ever known - from childhood to my studies. So creating this collection was a welcome challenge, because it pushed me. One almost has to be more creative with menswear because its parameters are tighter than womenswear.
Menswear was so new to me that during fittings I had to sometimes turn away when models were changing because interacting with the male body is so strange, despite me being male myself!
You won the LVMH Prize in 2019. If you reflect back, how has this achievement led you to your current point in creativity and design, and how has it informed your decision making in the SS22 Menswear collection?
I think the LVMH Prize really put me on an upward trajectory which has allowed for so many opportunities. It also made me think less within the extreme boundaries I had to work in prior to the prize, and the idea of delineating from traditional moves e.g its expected that if you start with menswear, you must continue - but I treat it more like a project rather than a must, and this sheds off so much pressure.
What does it mean to you to have been selected as the guest designer at Pitti Uomo’s 100th edition?
It’s an incredible honour - I mean I have been following Pitti for the longest time as many of my favourite designers have gone on to be invited. So it’s a kind of full circle, joining that legacy and history. 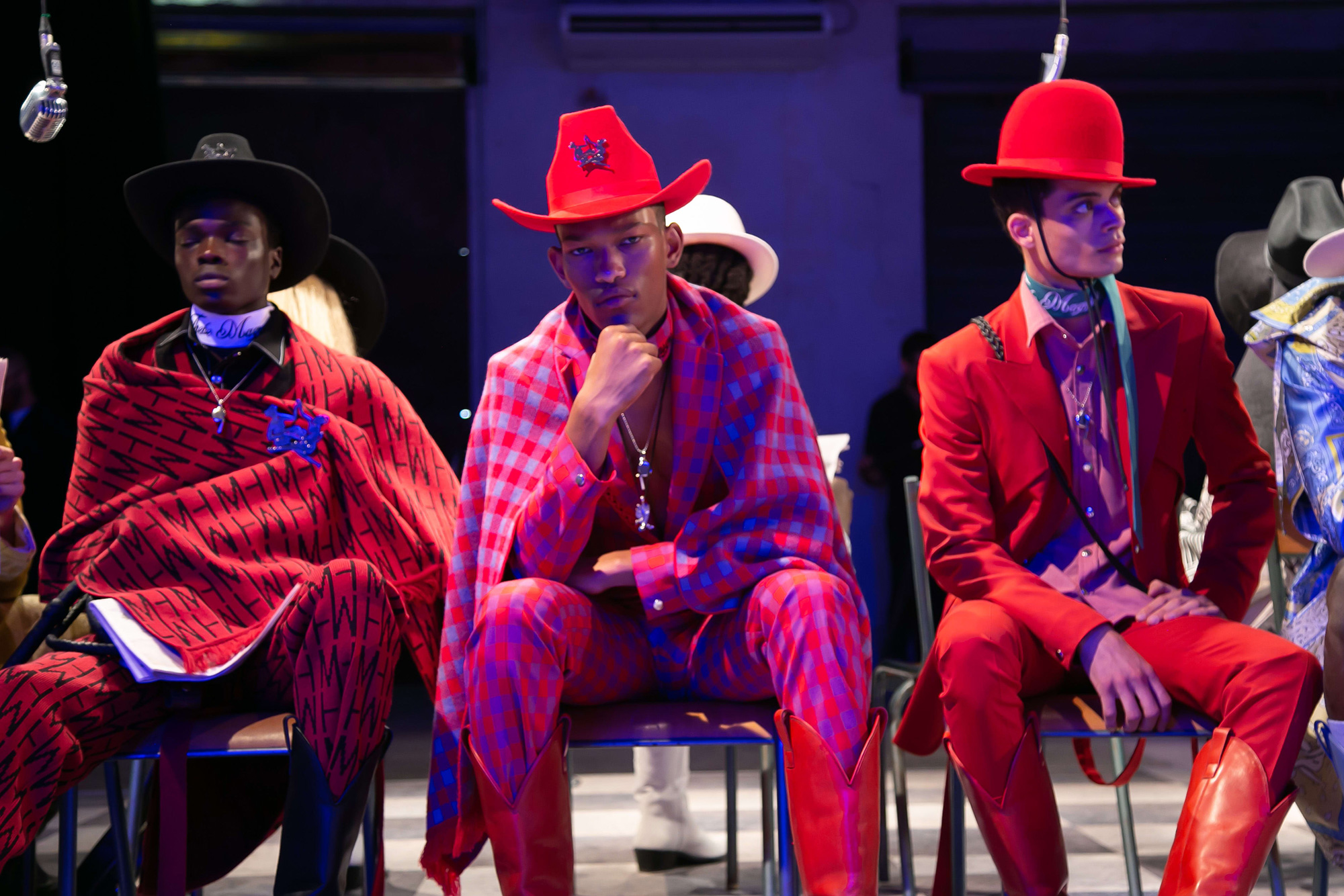 You have described your brand as, “a sort of encyclopedia of my country.” How does the SS22 collection reflect on this statement?
In many ways, the societal ills the continent wrestles with stem from the insidious actions of its leaders. In South Africa, we have normalised the daily tales of missing millions and economy-controlling families. These stories become dinner-time anecdotes, which minimizes the devastating ramifications that corruption holds - from increased gaps in education and equality to the mismanagement of public goods and services, which often morphs into violence. Corruption is a global issue, which defeats the ends of justice and deters a country’s sense of safety and trust. However, some strong individuals have said ‘enough!’ - the brave women and men who have come forward as whistleblowers, who have exposed the level of rot in companies and institutions both private and state-owned.
Just over a week ago, former South African president Jacob Zuma was ordered to turn himself in for an 18-month prison sentence after refusing to face an anti-corruption commission investigating his alleged involvement in corruption while in power; a rare act of justice. What does this mean to you looking back at Doublethink and your show at Pitti Uomo?
I think its a collection that becomes even more relevant as the days stemming from the date of its debut transpire - when I came back to South Africa from Florence, we were in level 4 lockdown and you could just feel, after the sentencing of Jacob Zuma, that tensions were flaring, and it all stemmed from the various touchpoints [that] corruption has successfully poisoned.
Doublethink was inspired by George Orwell’s classic dystopian novel 1984. Why did this novel resonate with you and how does it inform the collection?
It resonated because it almost foretells what’s happening in the world right now - the “doublethink” corrupt politicians operate under, the “big brother” of social media and its surveillance. 1984 the novel is truly seminal in that it acts like a blue-print of what could happen if we continue on this path. 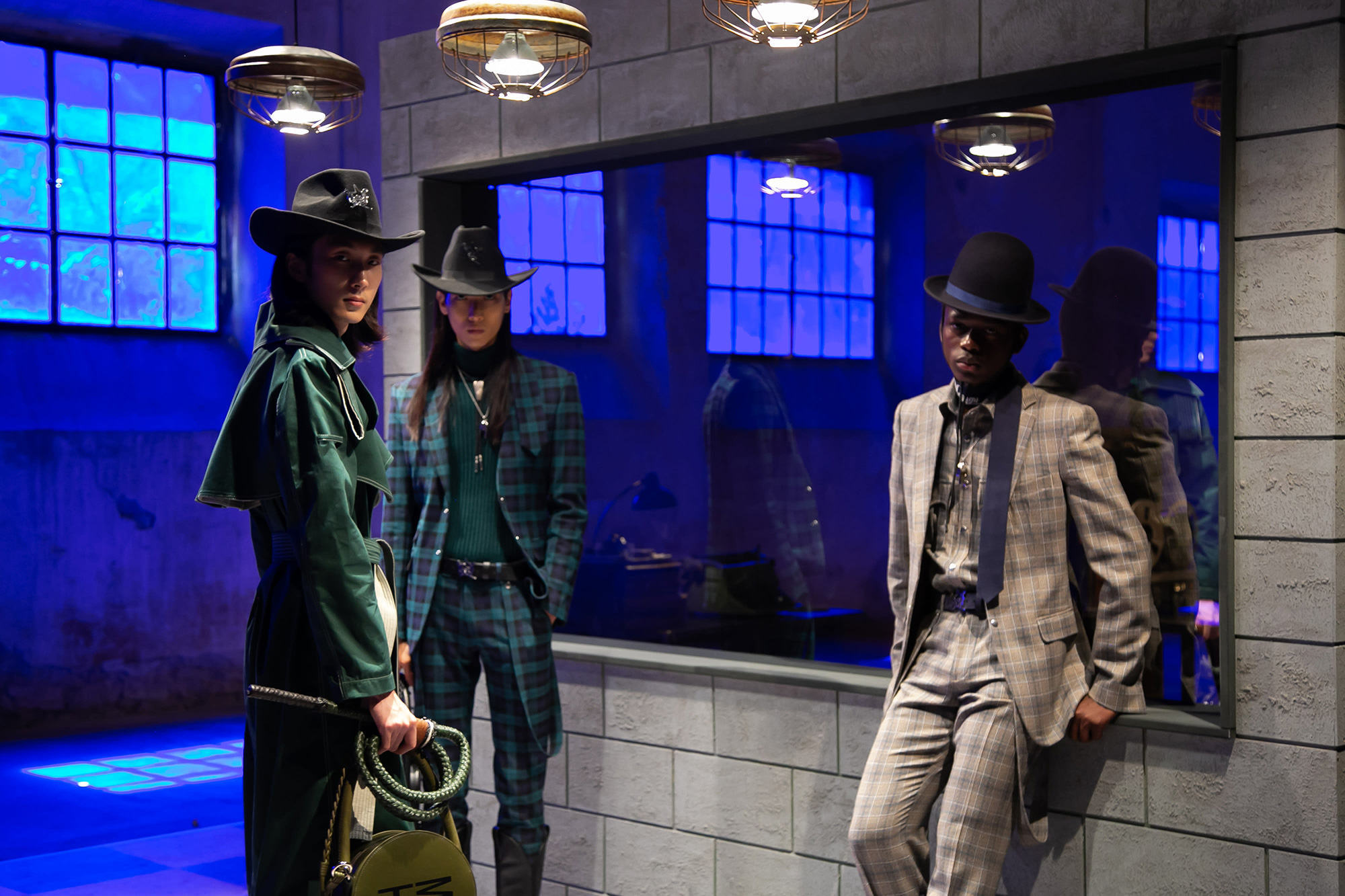 You also found inspiration in Mandy Wiener’s book The Whistleblowers. What can you tell me about this book and its meaning to you, keeping in mind the corruption in South Africa that you describe?
In a very interesting conversation I had with Many Weiner, she said, "Whistleblowers are not celebrated or cast as heroic characters. Instead, they are largely treated as insubordinate, pariahs or troublemakers, wearing the scarlet letter W and unable to find employment. I have chosen to shine a light on the plight of whistleblowers in South Africa, in the hope to advocate for a change in legislation, organisational support and a change in social attitude”.
This touched me because we have moved into a society that discourages courage. It takes so much bravery to go against the grain to report on corruption despite this action having the power to total a whistleblowers life - these people should be heros, and not the pariahs we turn them into.
In the collection, whistleblowers are portrayed as white-hat heroes fighting against black-hat bandits in a tribute to the most classic Western iconography, aiming to depict South Africa’s “corruption” against the backdrop of a recreated police station with an interrogation room and one-way mirror to boot. What drew you to this narrative, and in keeping with the clothing, what deeper narrative do you hope to portray?
I think we seldom get to see our corrupt political leaders in an interrogation setting - which is why the sentencing of Jacob Zuma was so important to see. I wanted to reflect this in the presentation, which was created in collaboration with Ib Kamara, Gareth Wrighton and Urban Production. It was so empowering - even for 2 hours and in a fantasy - to put into question these corrupt political leaders.
You revisited traditional men’s tailoring in combination with classic Western styles, for example the Great Basi buckaroos. What can you tell me about the design process in creating each look?
South Africa currently feels like a shoot-out between the corrupt politicians and the greater population who are incredibly upset and frustrated. I worked this idea into the styling especially together with Chloe-Andrea Welgemoed. Crystal Birch, the collections hat maker, made severely curled cowboy hats with our sisterhood emblem attached and these classic italian-gangster style banker hats. In the collection, chaps were worked into tailored pants - in the same material - to give into the reference without making it overtake the look. It's quite subtle how the west appears in the collection. 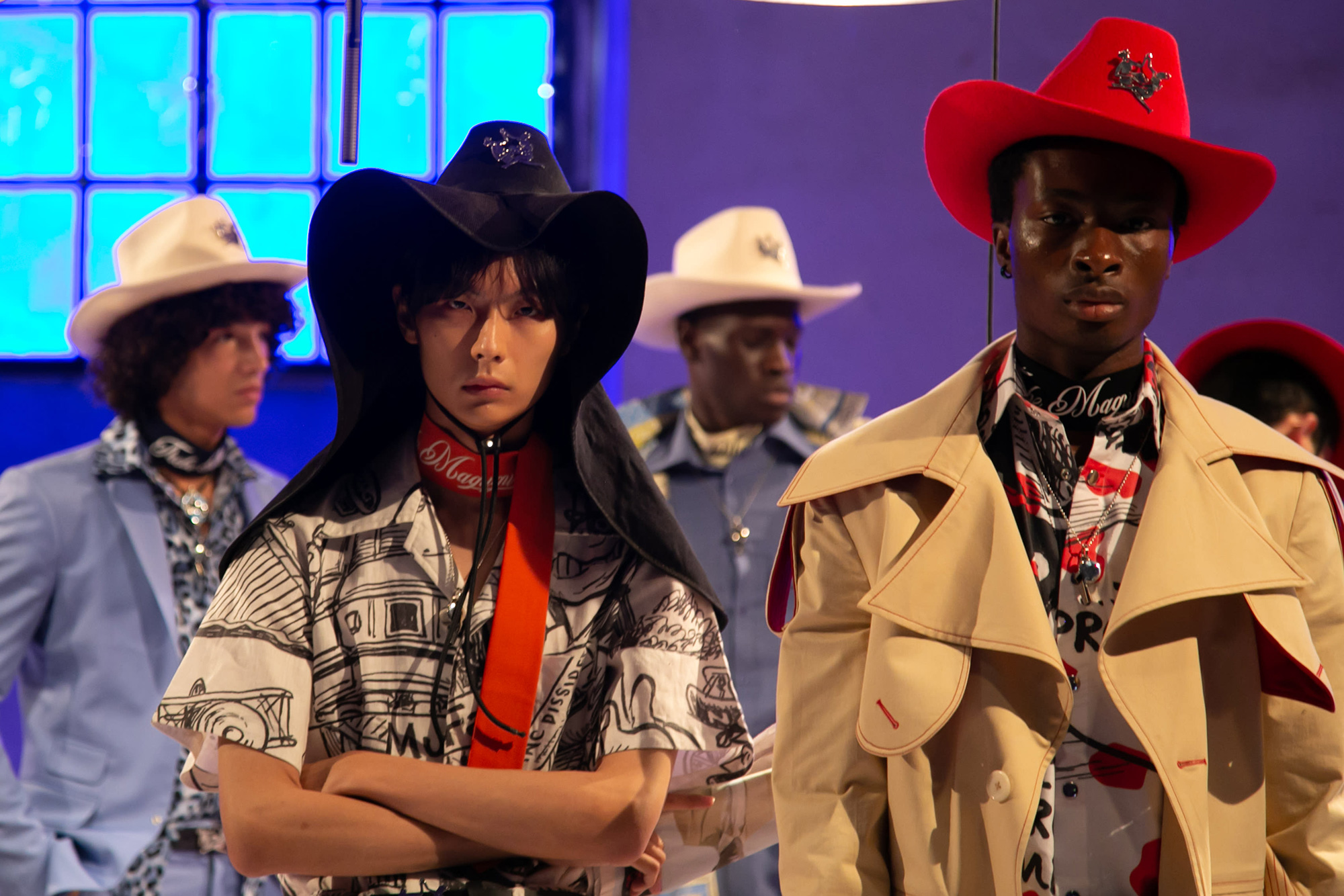 Many garments are printed with archival illustrations by political cartoonist Jonathan Zapiro. What about his work stands out to you and what does it mean to you personally?
Zapiro is a critical part of South African history, and every Sunday growing up, my family would buy the papers to see what controversial thing he had drawn next . His work captures exactly what’s happening in the country within the context of black humour. So it was only natural to use his archive works as prints in the collection, which I am grateful he agreed to.
What materials did you use throughout the collection and what drew you to them?
I used a variety of materials in this collection, but there is a very big natural fabric component - wools and cottons - due to the season. As much as the clothing have a commentary perspective, I do still prioritise their wearability. So very light cottons and wools pepper the collection.
For this collection, you also created your first men’s shoe, a black knee-length equestrian boot with the new TM crest and your Sisterhood Emblem. What inspired the shoe and who would you want to see wearing it?
I think due to the collection's western influence, it was natural to make a cowboy boot that reflects the offering. I am very proud of these shoes, because they straddle commerciality and camp in such an interesting way, especially because of the stainless steel spur that is a rotating Sisterhood Emblem. It's so on the nose that it feels new! 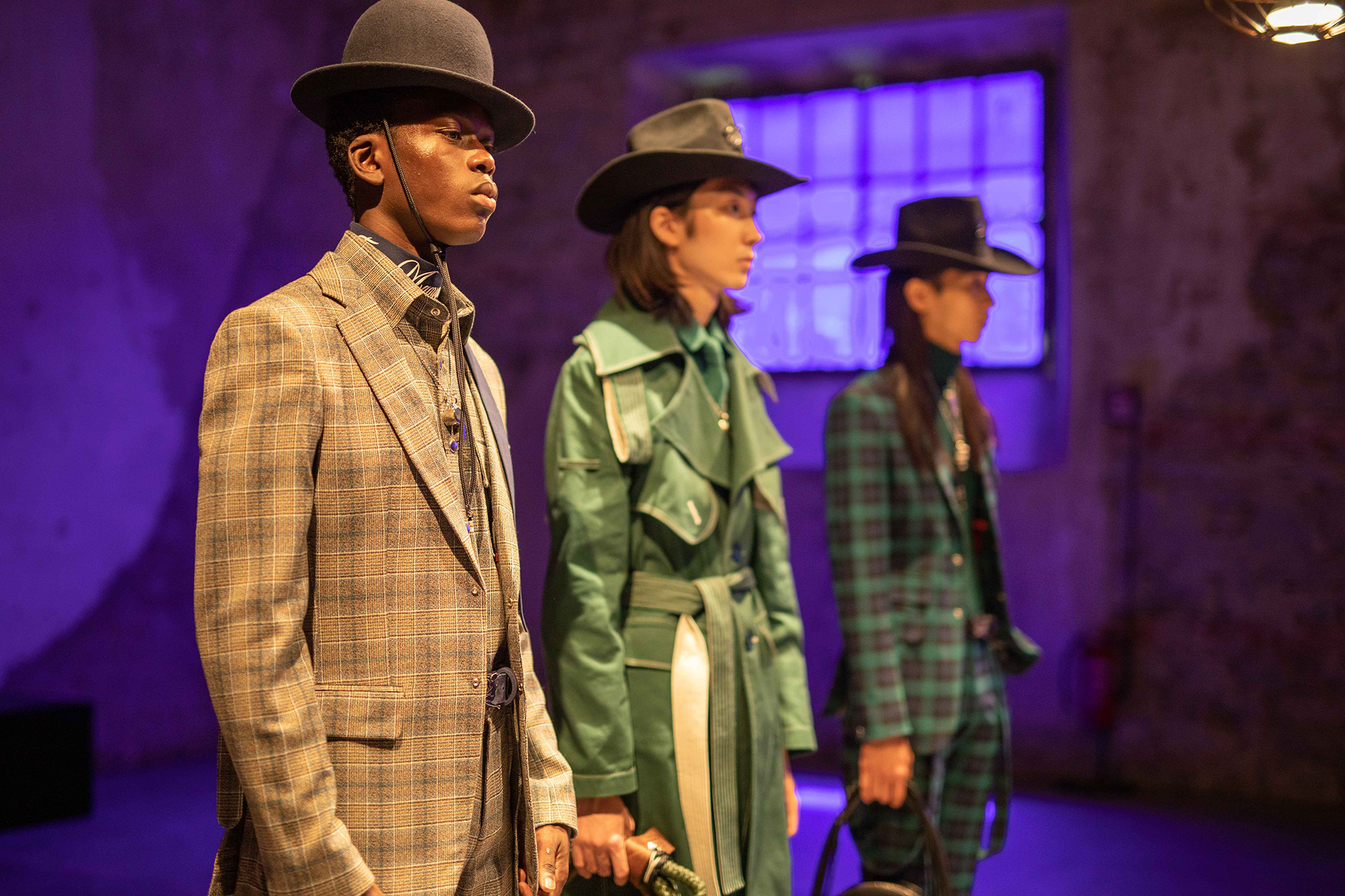 You have also created a 32-page newspaper with leading South African publication, The Daily Maverick. What journalistic subject matter is included within and why do you want people to engage with it?
I think fashion is at its weakest when it's just a product for a product's sake and it is at its strongest when it's addressing society and bringing certain issues to light. That is what I wanted to do with this newspaper - instead of just showing the collection, I wanted it to educate readers on what is happening in present-day South Africa. I worked with incredible journalists on this project and I am so honoured that they took the time to contribute. The newspaper looks at the socio-political state of South Africa.
Why is collaboration and working with South African artisans in particular so important to you? What was the experience of collaborating like this SS22 season?
I always work mainly with South African artisans and collaborators because I draw so much from them and their work - it's my way of remunerating in a way, giving back to the thing that I take [inspiration] from. It’s balance - and SS22 was no exception. It's been so interesting to see all the places people went to creatively with the brief of corruption, which added to the bigger universe the collection carved for itself. 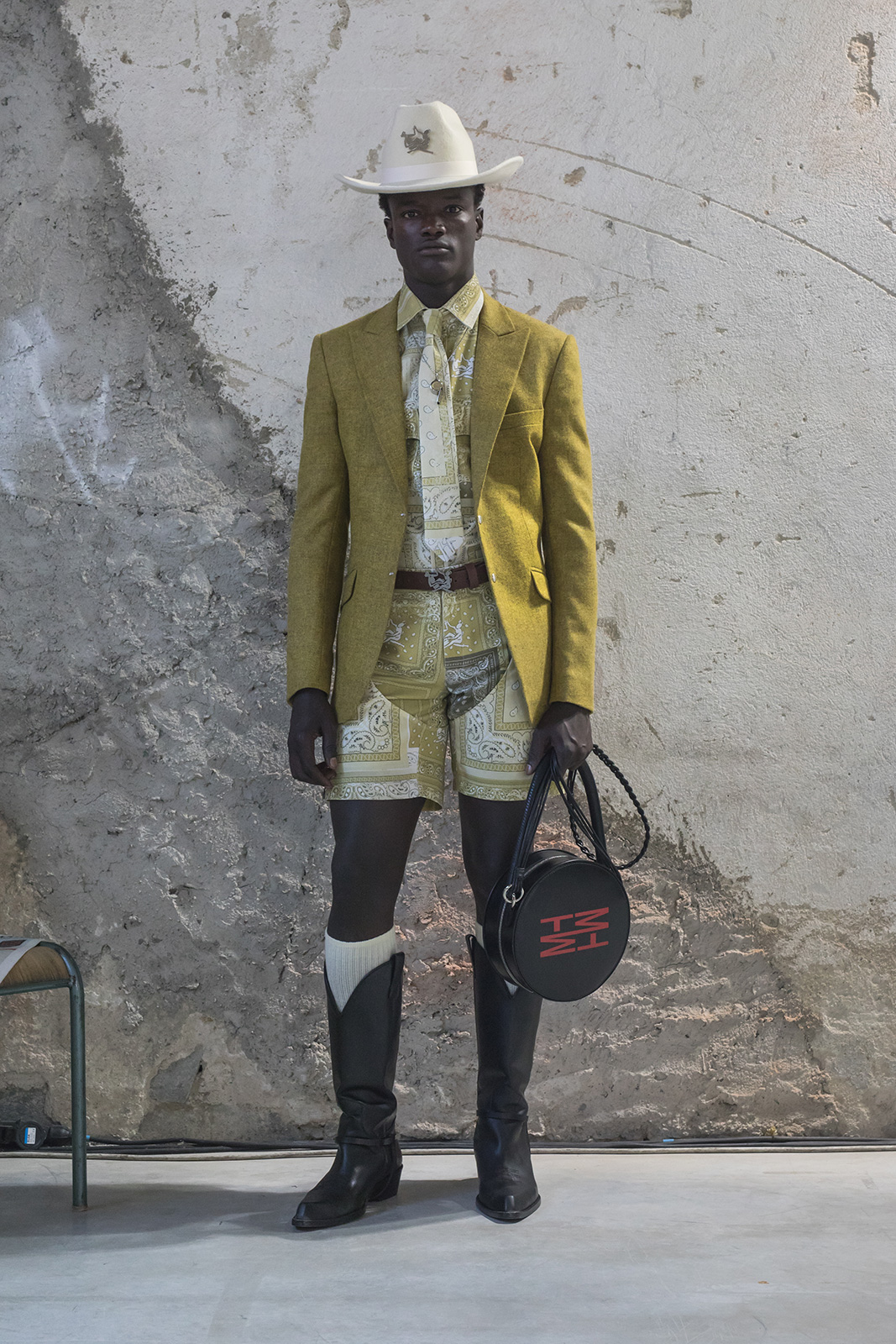 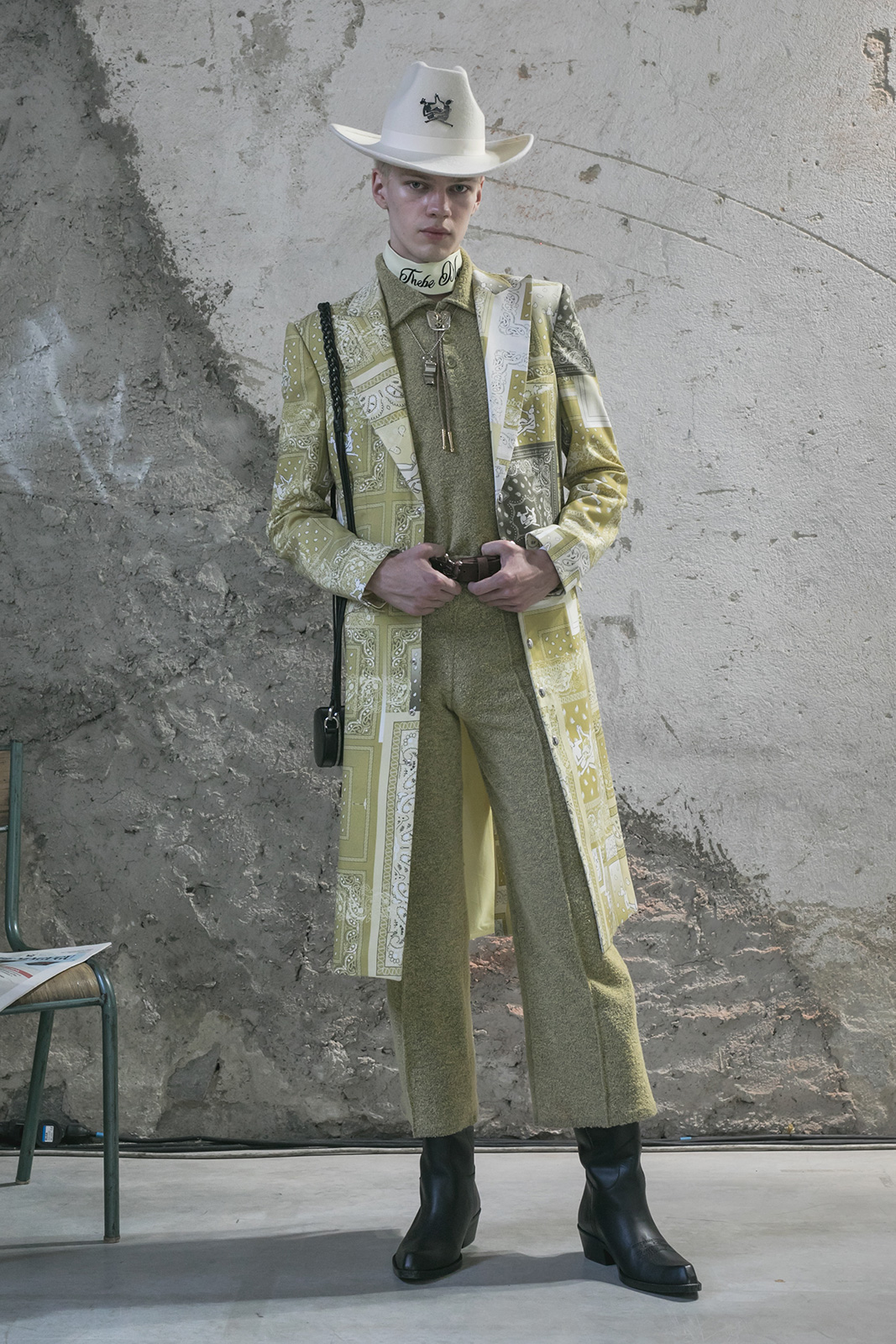 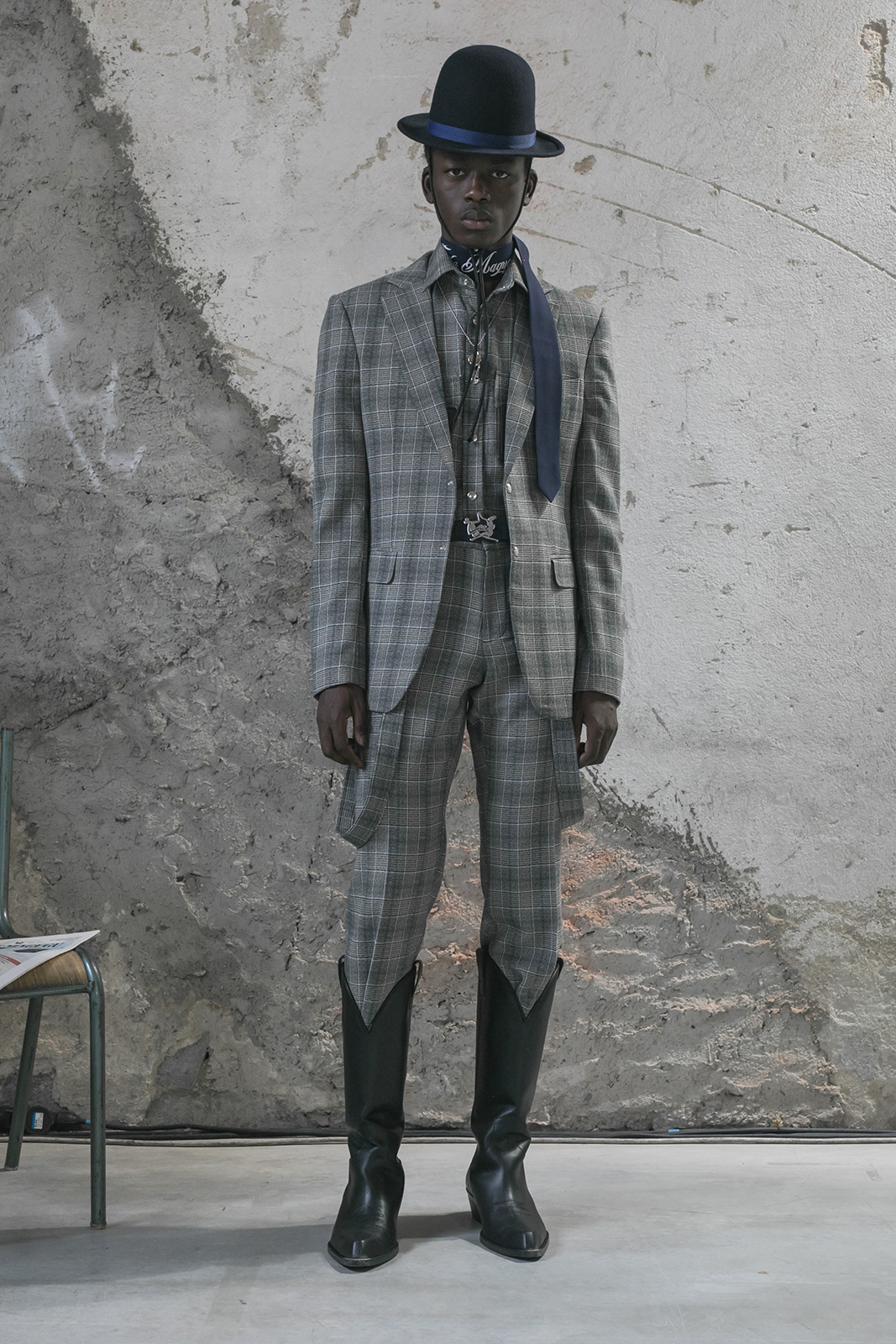 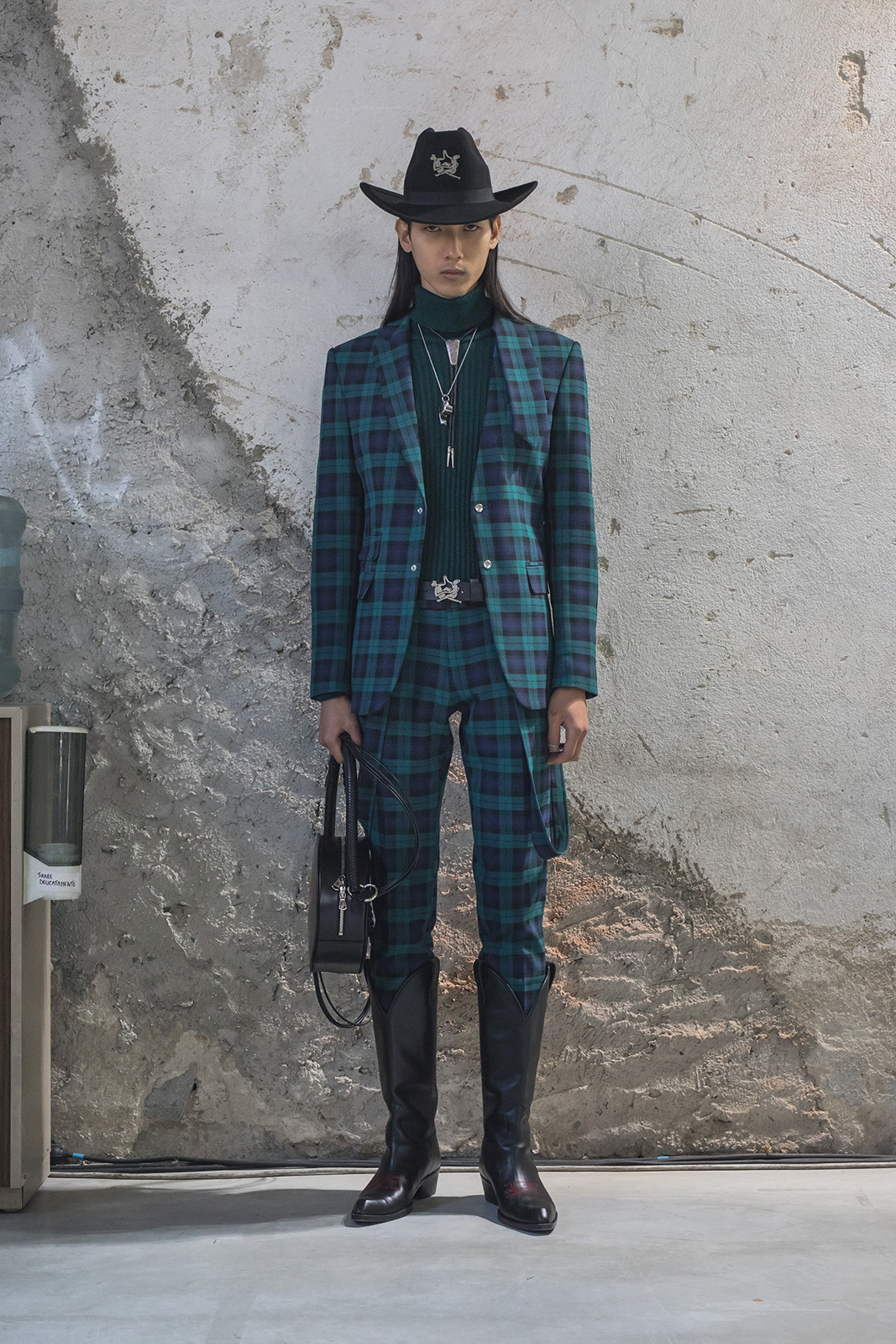 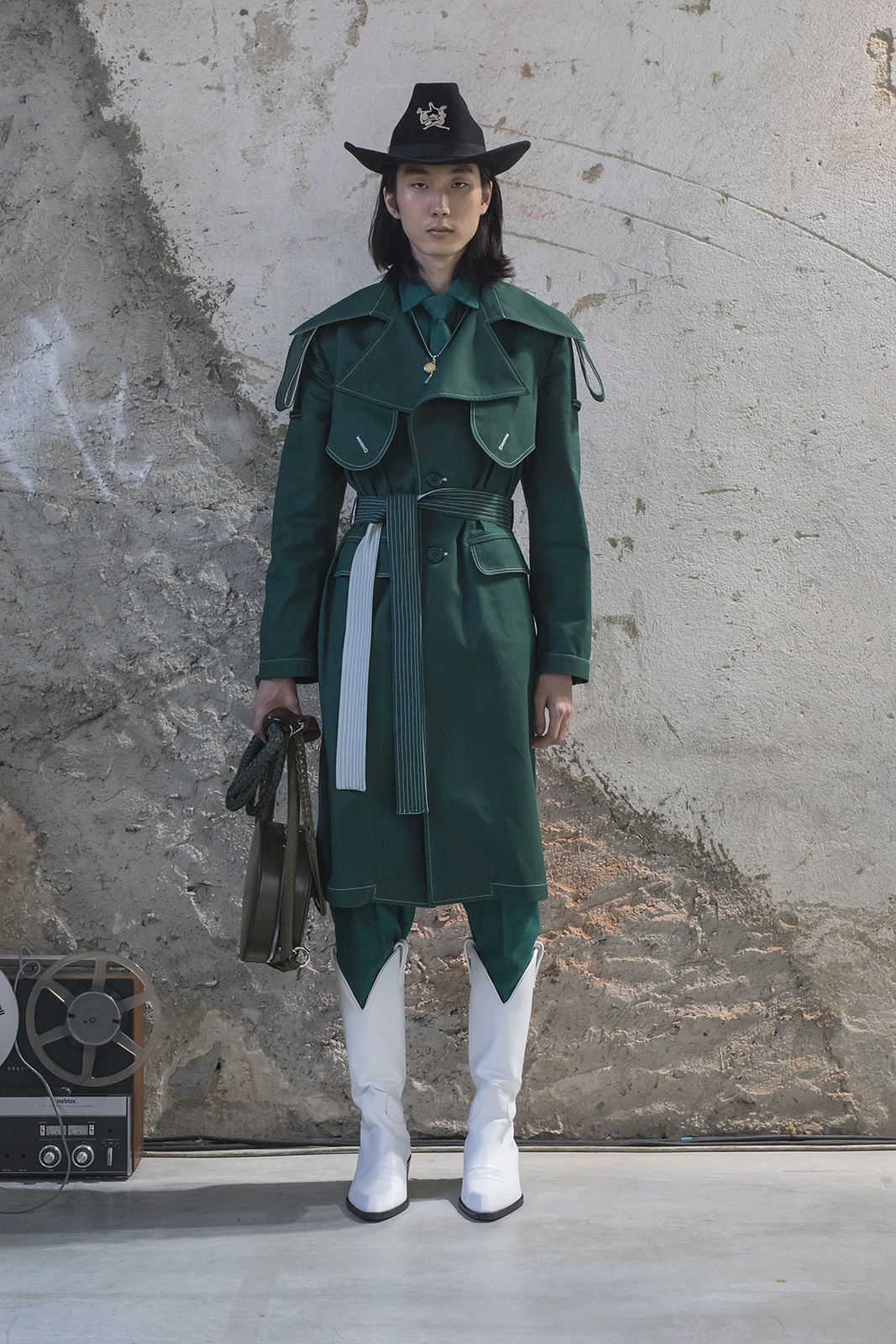 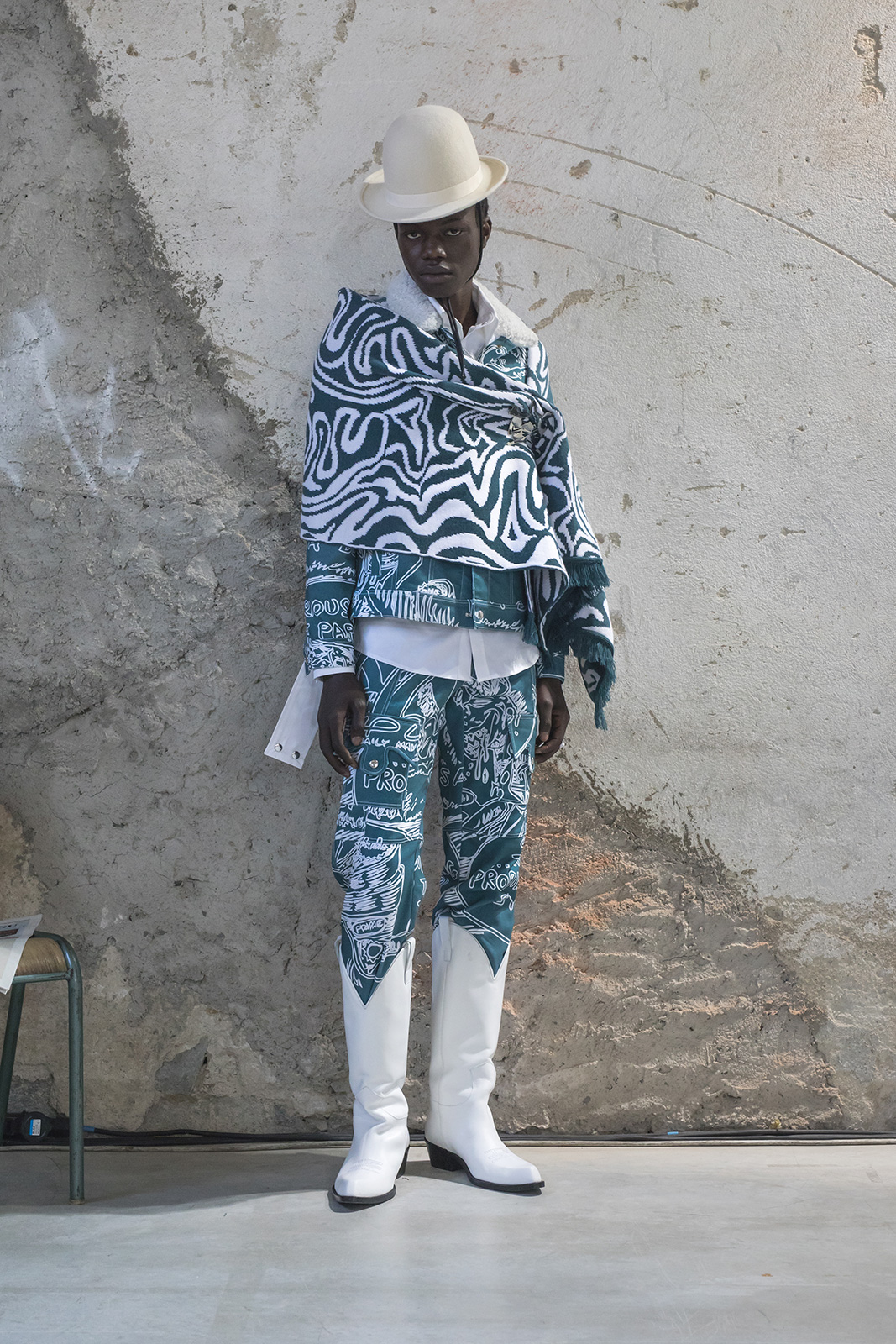 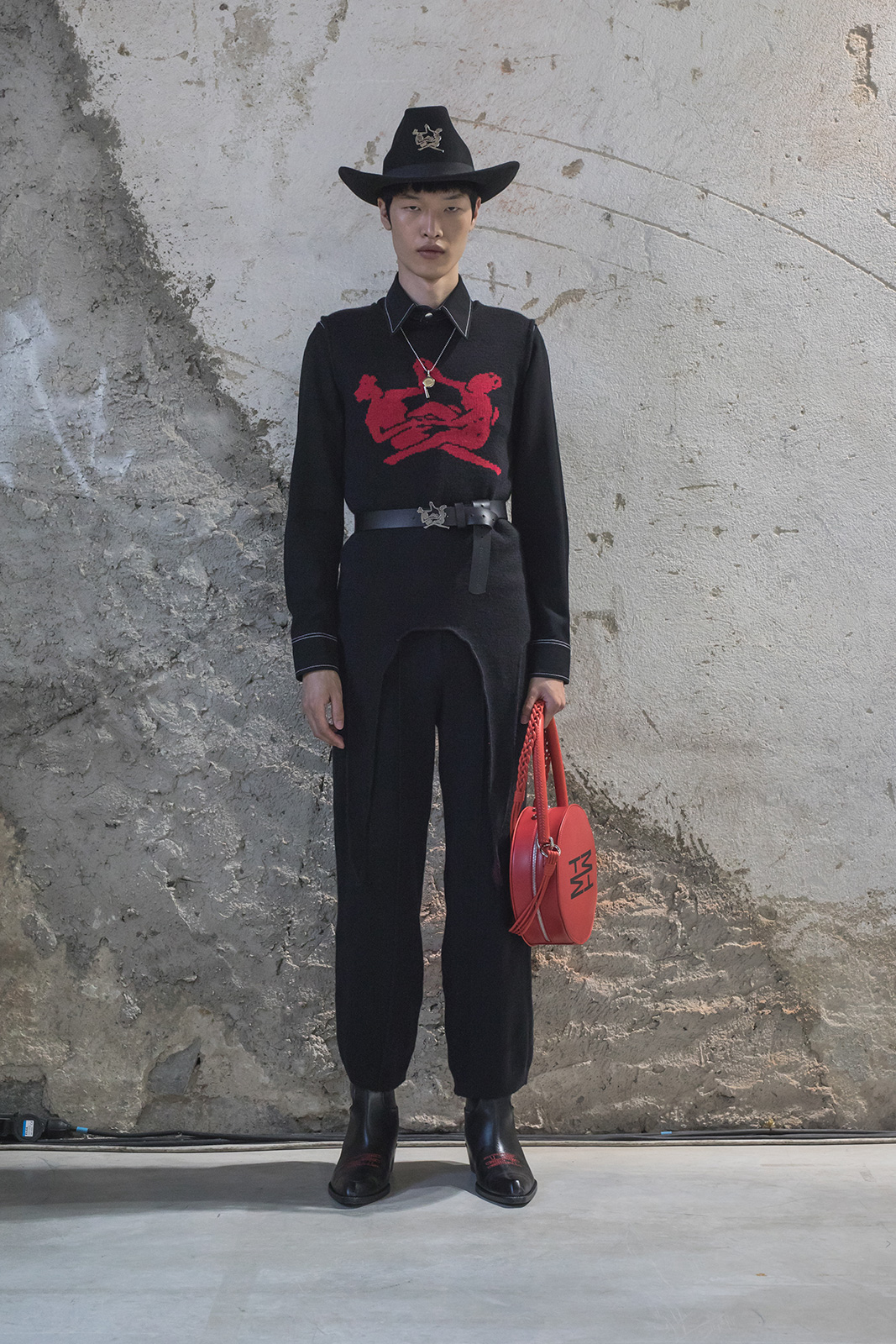 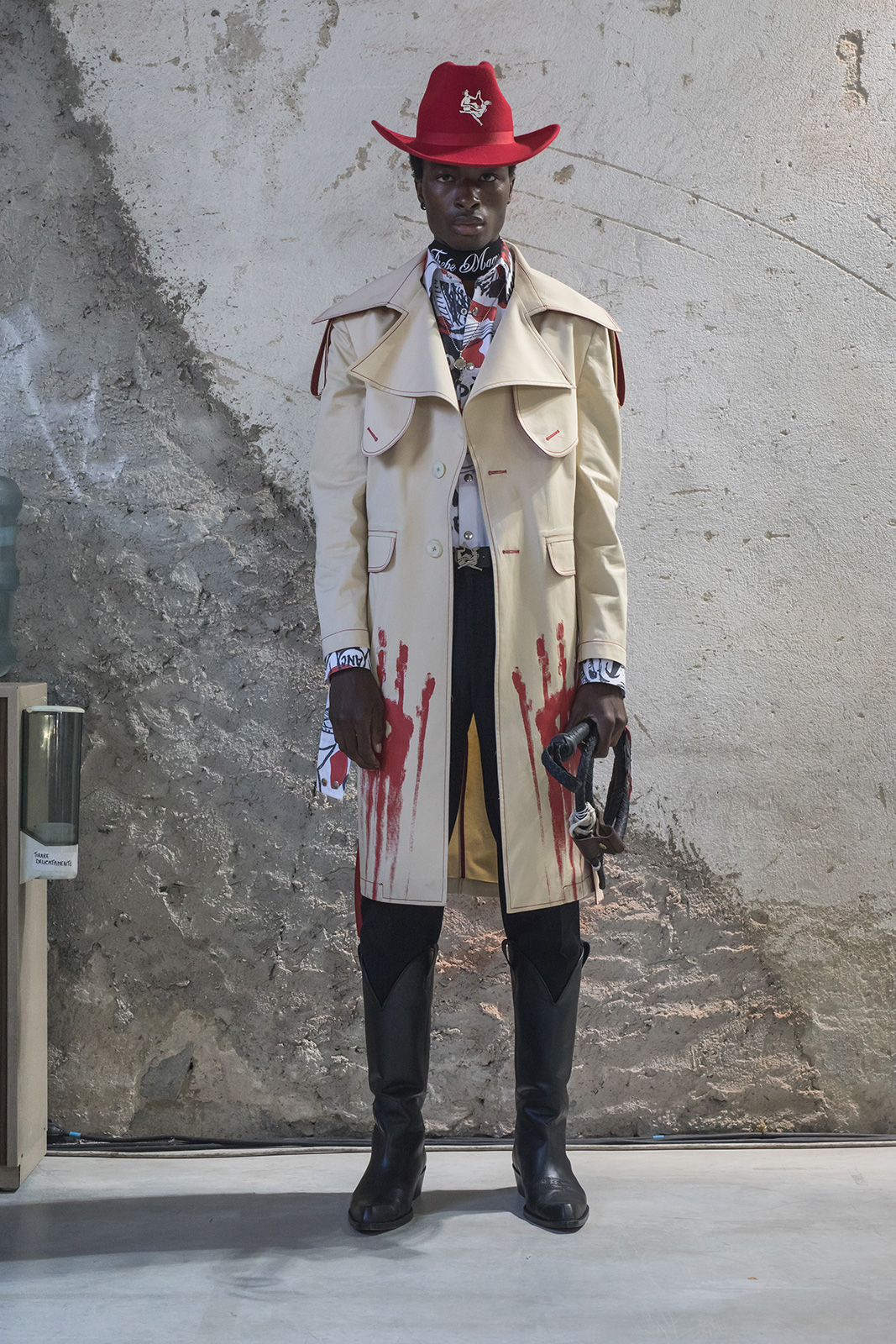 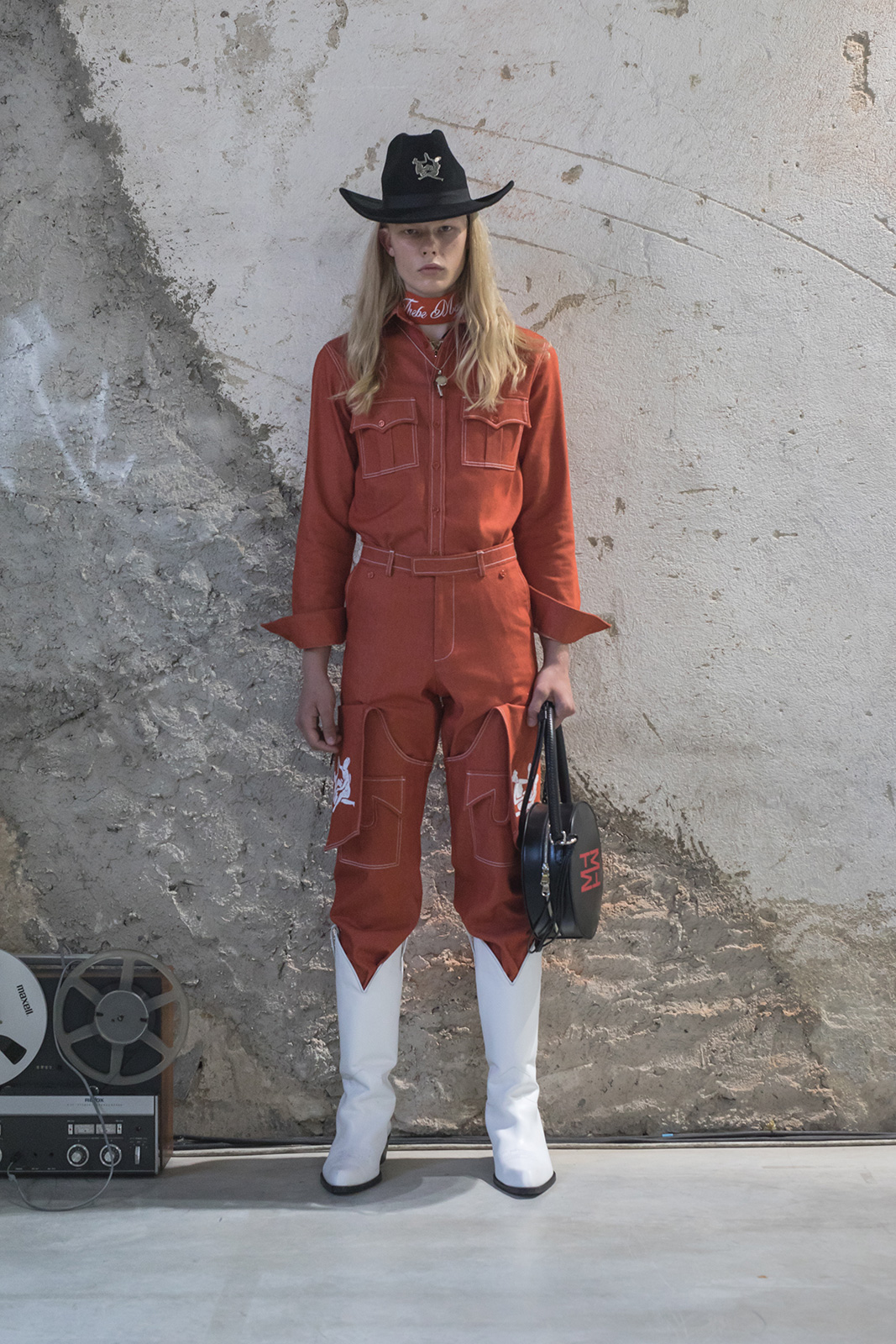 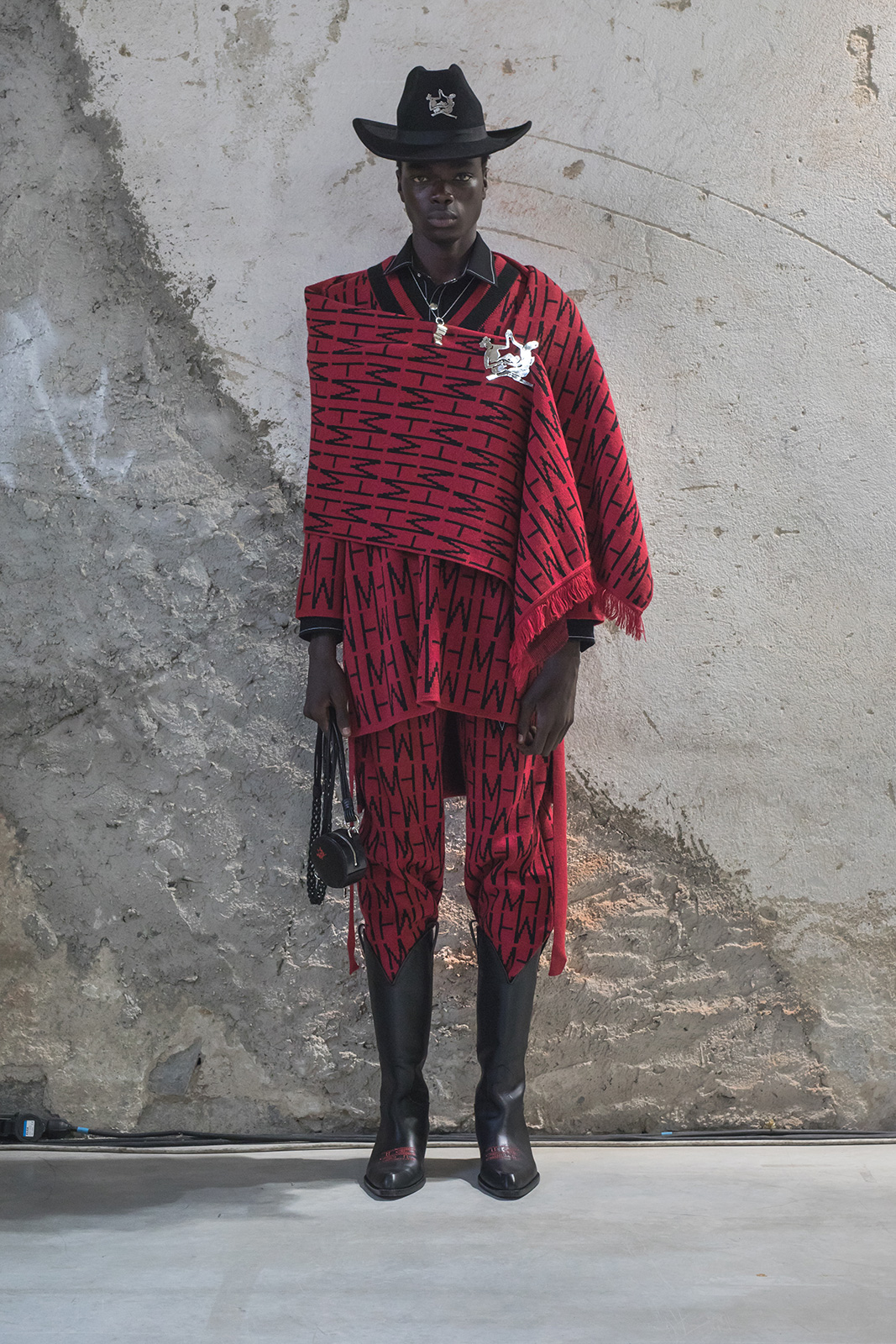 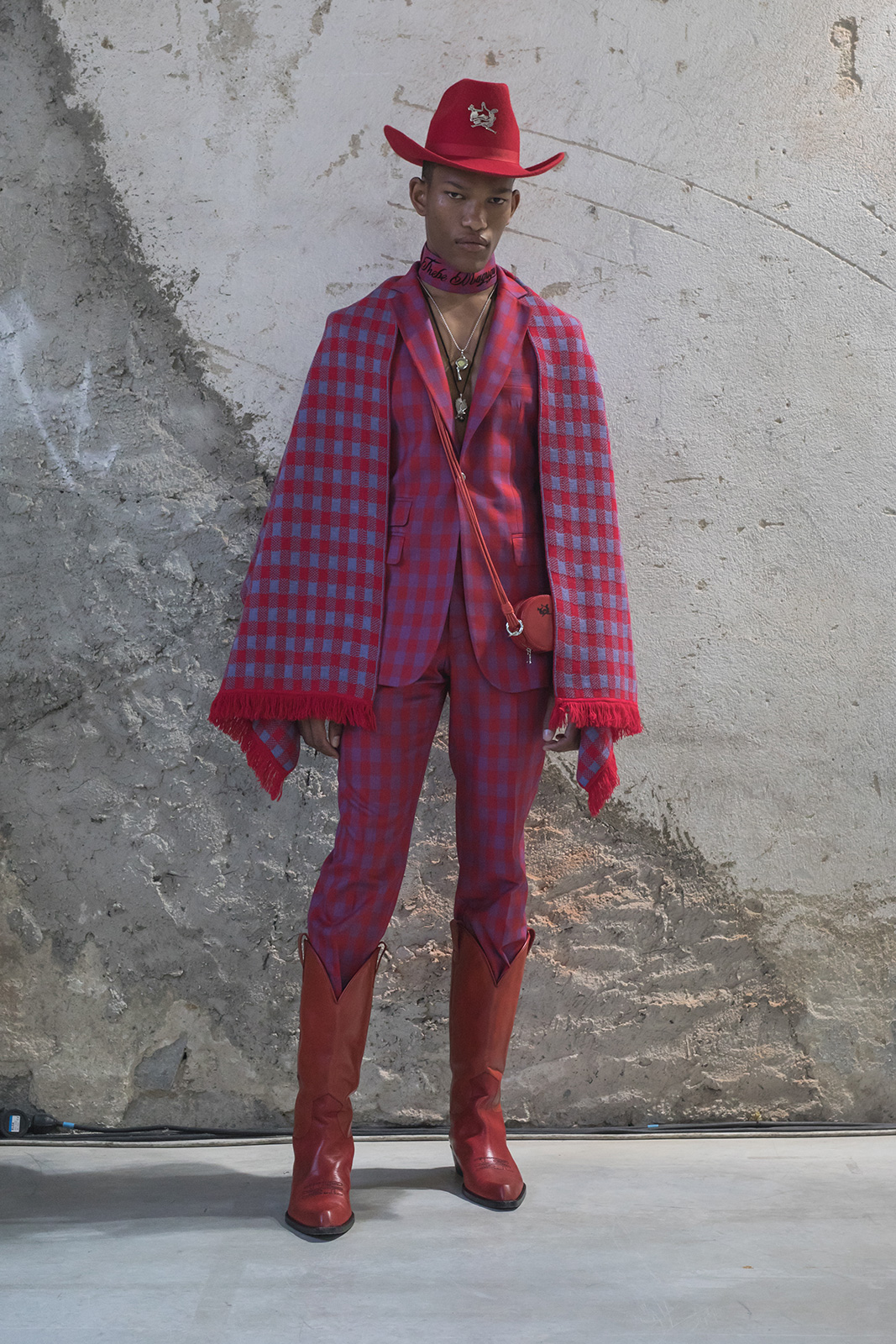 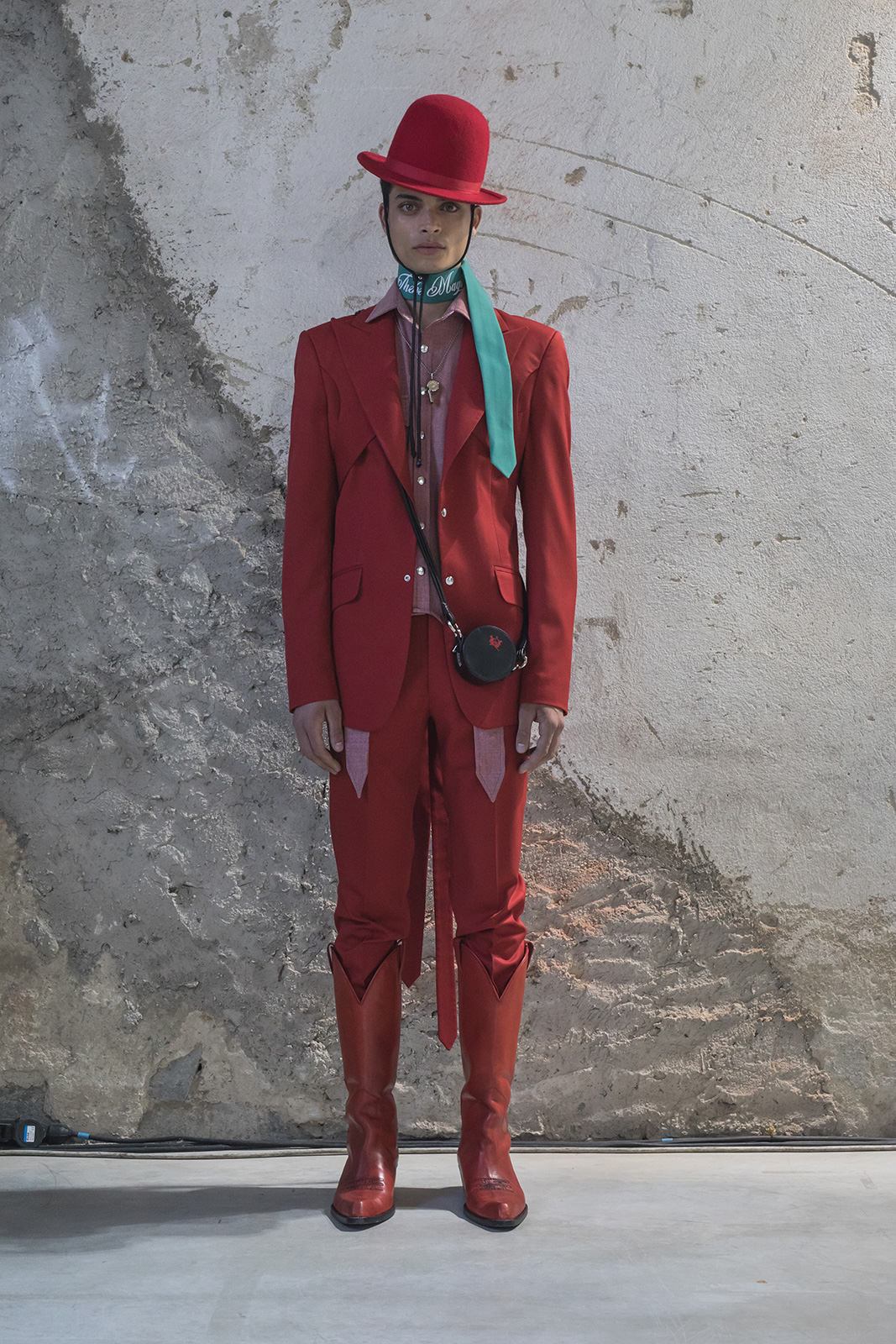 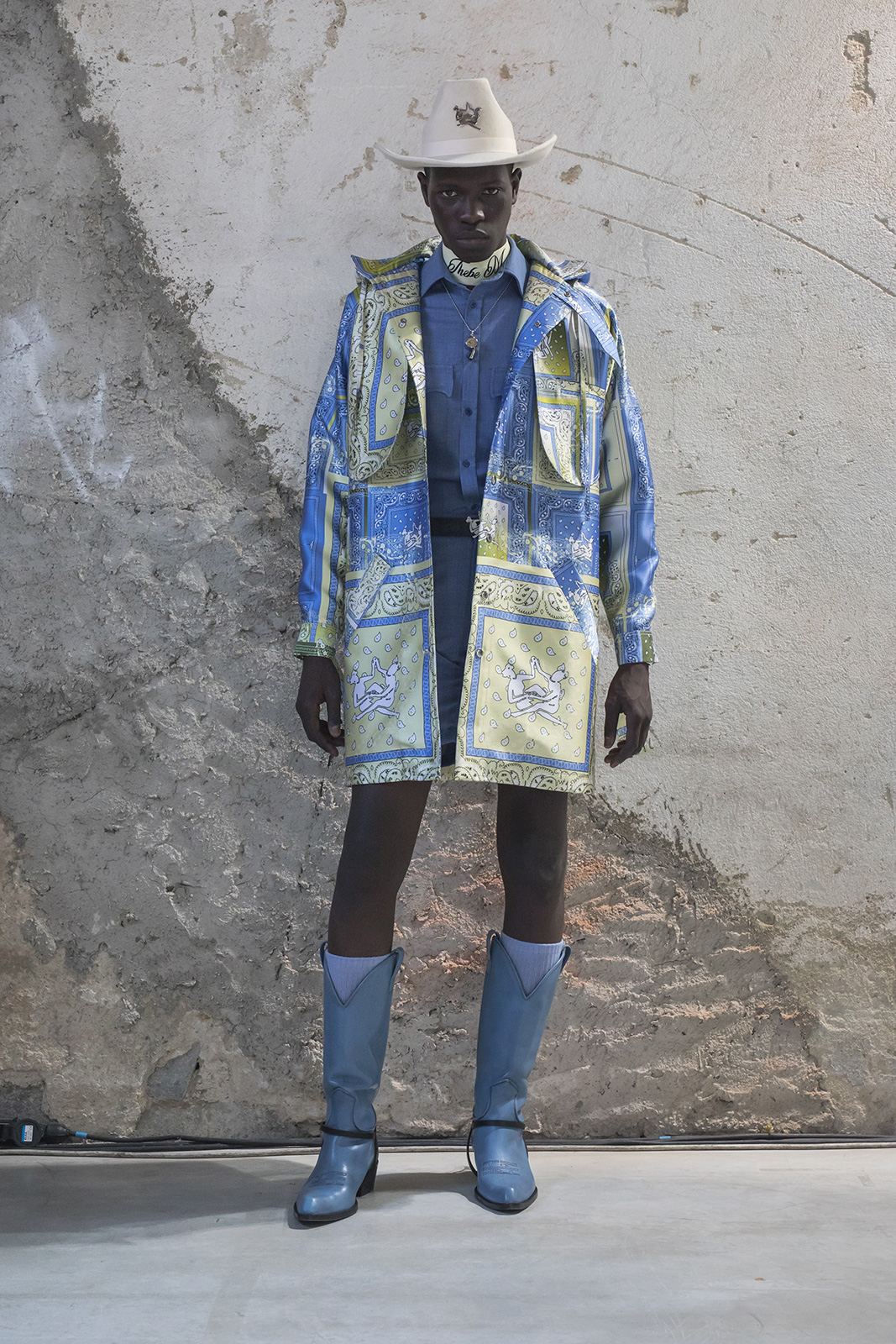 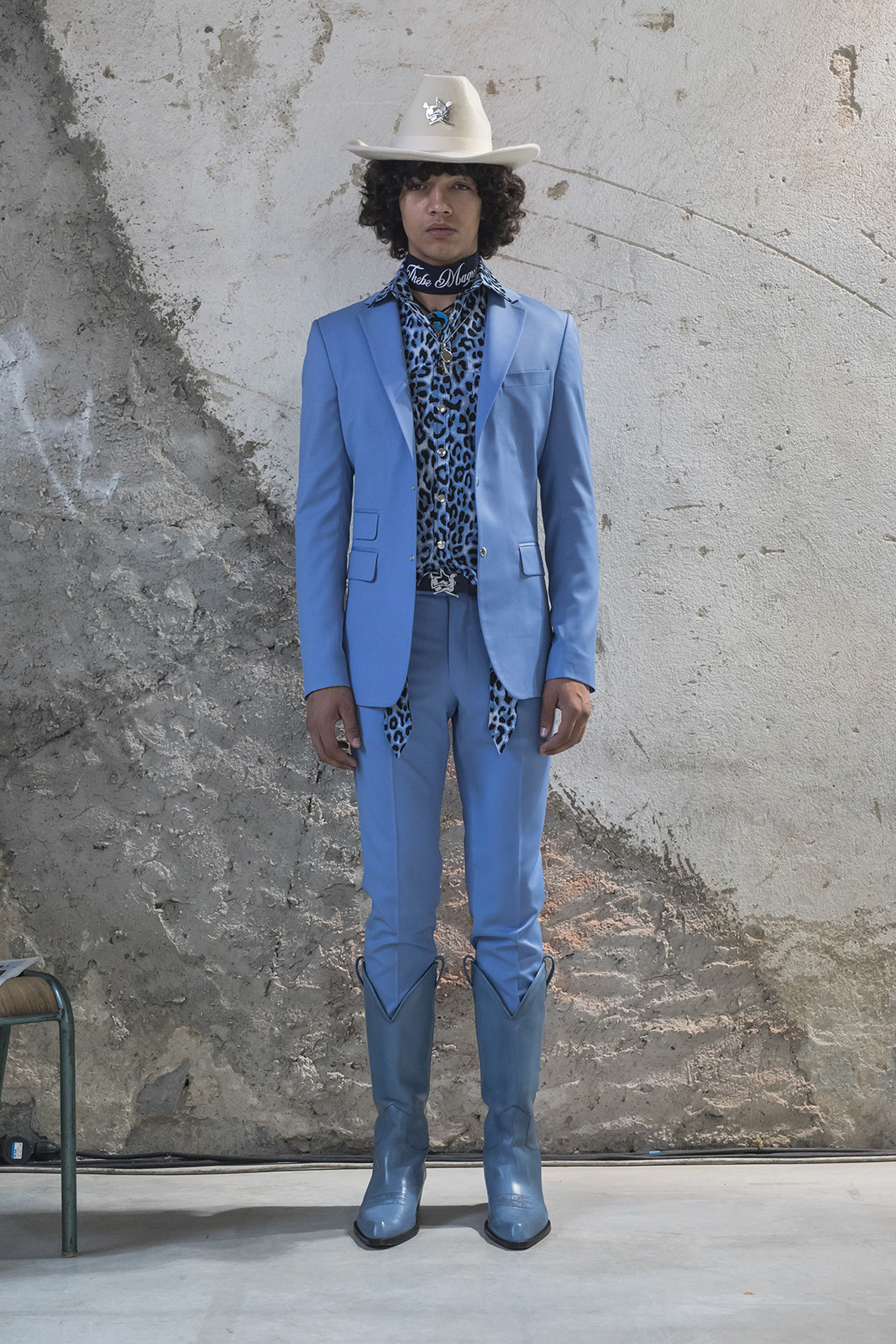