Dots across the sky 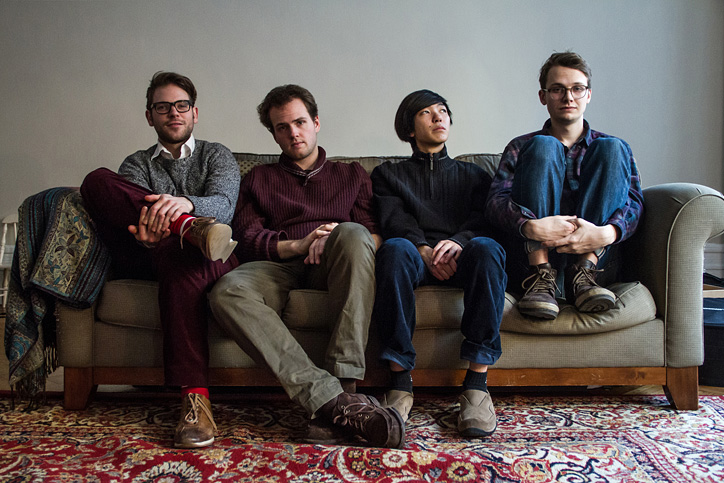 Hailing from Texas, China, NYC and Florida, The Morningsiders met at Columbia University. Listening to their music reminds you of looking at an old photograph while basking in the warm sunshine. Along with a new EP and shows along the Manhattan coast, their dedication to friendship has encouraged appreciation for what the band calls a folk glow.

How have the songs changed throughout the process of recording the album?

Magnus: Recording was really interesting for us because we sat down together and with the producer and started going through every moment of each song to make sure we were ready to stand behind them and have them frozen in that shape forever. The songs change a lot from month to month, even songs that we’ve played for a long time so we really felt it was time to make a commitment. We did end up changing a few of the lyrics and a lot of the arrangement. We realize that not everyone scrutinizes every moment of a song but we wanted to make sure that if someone were to do that, they could find meaning and intention in every song. It was a really hard process; we had to point out words and say what does that mean? I’m really happy with how they turned out.

What message do you guys stand by or want to create?

Reid: I mean, it started as many, many things. When you listen to our songs you notice that we are interested in many different sounds. One aspect of our sound that we talk about a lot is the folk influence, and what it means. It doesn’t necessarily mean Americana. I think our sound is very influenced by what I like to call the folk glow, it’s the feeling you get in a room when the folk music strikes a very specific emotional core and makes everyone melt a little bit. It’s not something that you necessarily hear in every single song we play but it’s definitely something that we draw from.
Going into this EP, intimacy was really on our minds. We waited a long time to put out a project. We wanted to make sure that our friends, who had listened to these songs for years, would find a similar emotional intimacy in our record as they found when we were playing for them in their rooms or their Birthday parties.
Our producer Dan Knobler at Mason Jar Music was really understanding about that. From the beginning he was really open to making an intimate and emotional EP and he wasn’t going to try and square the edges or gloss it over. We ended up tracking a lot of the instruments live just to get that sound of playing in the same room. We had an awesome time with him; he really got the motto from the beginning I think.

When you’re recording music together, what does it look like?

Cody: In past recordings I’ve done, people are isolated in different booths and they are playing at different times and it can feel a little disjointed. There’s a certain synchronicity that happens whenever people play music live together. That’s why people continue to go to live performances other than just sitting at home, listening to records. Again, there’s something different that happens in the studio when people are in the same room. You can hear the breath of the person next to you in the silences and that nothingness is actually something that’s happening.
Magnus: What that meant to the record is that we did the drums, the bass, and the guitar all at the same time on all four recordings. Doing the rhythm section like that and being able to look at each other was very important. Giving each other cues with our faces and our bodies really gave it an imperfect sound. For example on Dots, you can hear a lot of sliding on the guitar string, little screeches as my fingers move around and we really wanted to leave that stuff in to make it sound like we were actually playing instruments- not just singing along to a track.

Looking back to that time, what stories can you tell us about the making of Unfocus?

Magnus: The title of the EP came from a lyric in that first song, Dots that we wrote in our junior year of college. What happens to a lot of people at the end of college is that you look around and see less close friends than you had at the beginning. You pull your cards a little tighter to your chest and battle the existential crisis of what’s going to happen with life. Everyone has their own take on it and ours was all about music, definitely.
I think Dots really came out of a place where I was thinking a lot about how much I had to commit to this band. That meant that I wasn’t going to be able go out all the time and see friends that I was used to seeing every day. Stepping back, I think the chorus definitely addresses those friends and says, you know at some point I felt encouraged to do something so much that I had to see less of you. So that’s sort of what it means to me.
Generally it’s about stepping back and looking at the whole sort of shift in priorities that tends to happen every few years and maybe for some people it’s like every month. Sometimes you just wake up and you look around and you realize that you haven’t talked to so-and-so in a really long time, and you know it’s not really a bad thing. It is a weird feeling that something has happened and it happened very, very slowly.

Would you say Dots is in some way a dedication to this happening?

Magnus: I know that these guys were in the same boat but I was really lucky that a lot of my friends were really supportive of the group from the very beginning. Even when we would play in horrible locations with a horrible sound and we weren’t very rehearsed. There was definitely a turning point when their encouragement meant that we started practicing 4 times a week. We started staying in and trying to really turn it into something real. The encouragement of some of our closest friends led to us really focusing on music and seeing them less and less. It’s talking to those friends and saying something in between thank you and I’m sorry.

What are some words that describe being in love?

Cody: Young love is intriguing. The song Twenty Five actually impressed me the most when I first heard it, because I had turned 25 that year. It synched up with how I was feeling with regard to a former relationship that I had retreated from. I mean, if you listen to Twenty Five, it feels like a person who is essentially unfocusing to assess the future and to attentively refocus. There’s a lot of adjusting that needs to happen in order to dedicate oneself to any sort of love, whether it be in a relationship with one other person or in a band with three or twenty other people. It’s a similar type of dedication and focus that is mandated.
David: I’m struck by the true miracle that is two people falling in love. If you think about the probabilities of two people falling in love: I’m always just kind of blown away. I think life is a miracle, but I think love is an even greater miracle. There’s that line in Twenty Five, “when I met a friend of mine I hadn’t seen in quite some time”, I feel there’s a lot of chance things that happen, but everything is comprised of these chance occurrences sort of compounding on top of each other. And love is kind of the ultimate expression of that.

Now that you have released your EP, what's changed in your approach to music this year?

We’ve been recording a lot recently, and I think that we’ve come out of it very differently to how we went into it. One of the things we’ve been talking about a lot as we’re writing (we were talking about it last night) is how we want to distil a specific message in each song whether it be musical, lyrical or contextual. But we don’t have to drill everything into one song. Every song doesn’t have to represent everything that Morningsiders have been and will be. I feel a lot more positive about writing, and it’s a lot freer.