Experimenting with light, sound and space 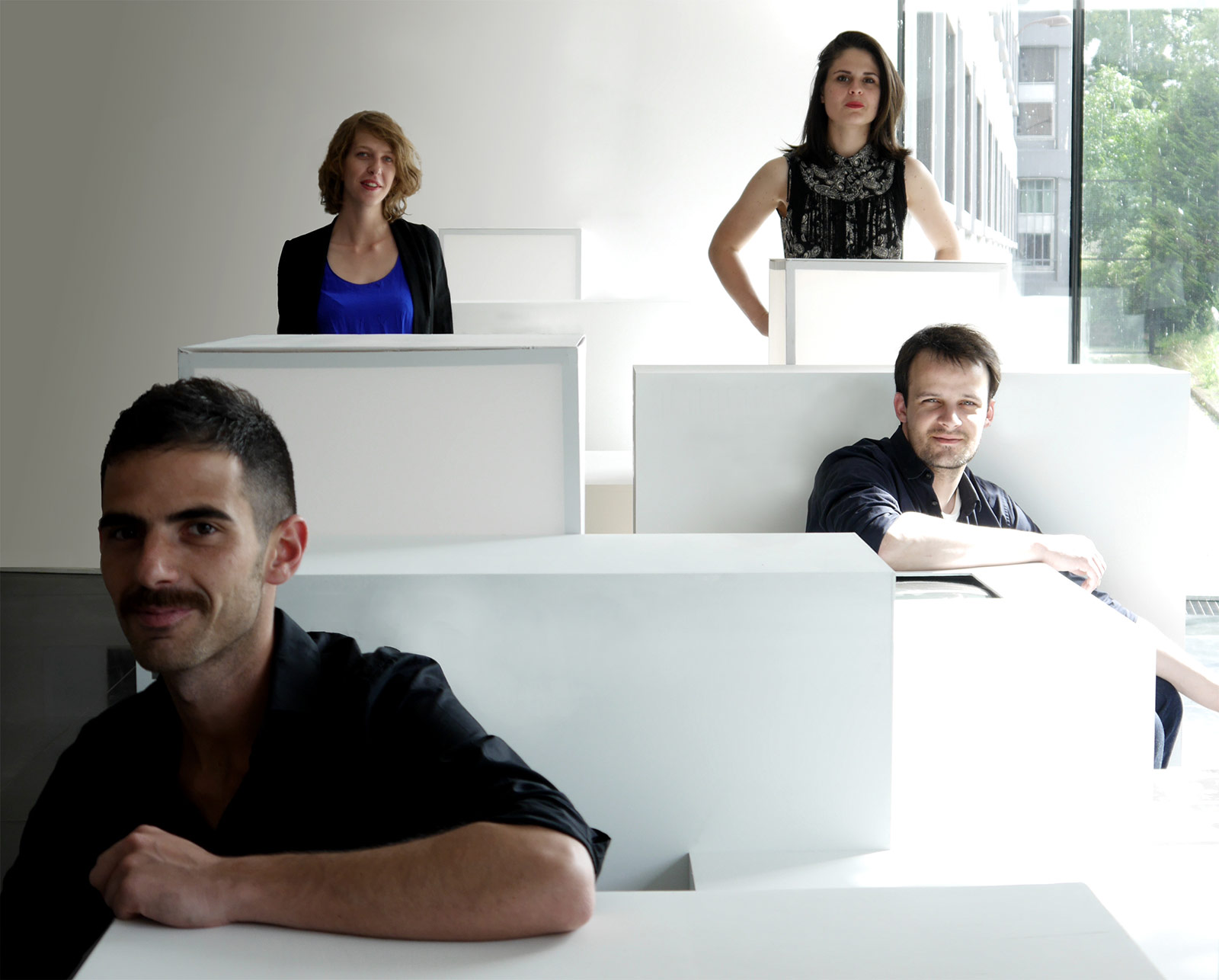 The people behind Team IF work mainly with light, which can be a tool, a concept and a material at the same time. Cinzia Campolese, Marguerite, Erminio and Regis are the founders of this artistic studio that creates audio-visual installations that transform spaces in order to make people feel with all their senses. They come from the architecture and design fields, and they have already collaborated with art magazines and showed their experiential pieces in festivals, and even designed the set for a performance play in a theatre. After falling in love with their creations and recovering our eyes from their flashing lights, we talked to them to discover who they are, how do they work as a team and what’s going on in their lives.

The team is composed of four people: Cinzia Campolese, Marguerite Anthonioz, Régis Mandrillon and Eminio Serpente. Introduce yourself a bit, so we get to know you.

Hi there! We all meet in Paris and started to collaborate at the end of 2012.
Cinzia: I’m a set designer. I studied Set and Costume Design in Florence, Italy. The course was mainly based on theatre scenography, and during my studies I worked a lot in music festivals, theatre and classical opera productions. It was not until my final major project that I chose to explore the possibilities of employing new technology within audiovisual set design. As soon as I graduated, I moved to Paris and began working with 1024 Architecture. Two years later I co-founded IF with Erminio, Marguerite and Régis. Since January 2015 I started focusing on my own projects and I have began collaborating with musician Trespur.
Marguerite: I’m an architect. During my studies I enriched my experience with an internship in an architectural office in Rio de Janeiro, working on rehabilitation projects in the favelas. After completing my studies, I worked in various architectural firms, primarily on the construction of housing and public buildings, as assistant and project manager.
Erminio: I’m an architect as well. My professional experience has mainly developed in France, where I reside since 2011, working for several firms. I founded IF in 2012 together with Cinzia, Marguerite and Regis and explored practice mainly in the field of scenography. I am currently collaborating with a global event company in large-scale events and multimedia shows.
Regis: I’m an interior architect and product designer. After a training experience on woodcraft, I decided to deal with interior and product design. After my studies, I worked in various workshops and studios of architecture and design, focusing on space planning. I realized a series of creation and drawings for home furniture and product design.

When and where did you all meet for the first time? Who was friend of whom, and who introduced whom?

We already secretly knew each other (laughs). Well, it’s a bit tricky… Cinzia and Erminio had already met in Florence during their studies, but they never got closer back in Italy for unknown reasons… and then they found each other back in Paris. Then Cinzia and Erminio met Regis and Marguerite because Erminio and Marguerite worked together in an architecture studio in Paris. At the end we all randomly met on a 1024 architecture party in Paris. Since then, we began hanging out and partying a lot! And then we started to collaborate together. 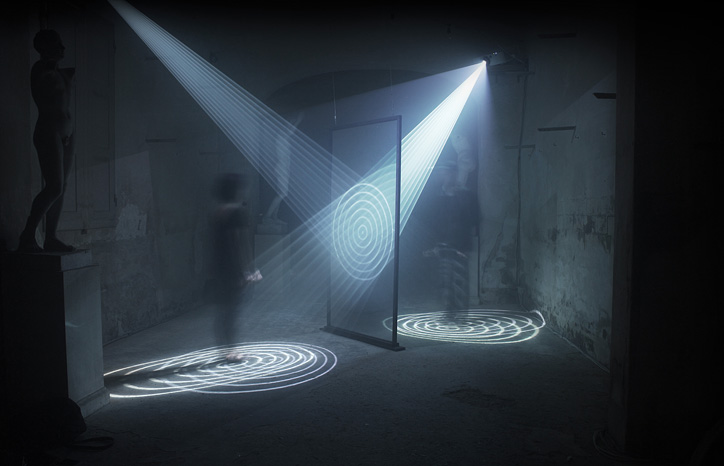 When did the idea of creating an artistic team come up? And how did this idea develop and become real?

At the beginning we all worked on different private studios and ateliers, and we always exchanged histories about our experience on each respective discipline. In October 2012 we decided to work together for a Chaumont competition, a first project where our name “IF” was invented, and later we decided to keep going together, even if we did not get the prize at the end! (Laughs)
Then we collaborated for an artistic magazine called Ksat for a series of happenings that incorporated audiovisual technologies into set design and micro architecture, for a one-night-event. Since then, the wonder of growing and melting our knowledge was stronger.
We’ve put together four series of projects that involved design in four different fields: exhibition, set, audio-visual and object. The projects were 125.25, Cynthia, PDT and Apophenia respectively.

There are four of you in the team, and as you were saying, you have different backgrounds. How is it working together? Does each one of you play a specific role, or does it change from one project to the other? Do you always work together (the four of you)?

For the first projects we always tried to cooperate together. Of course, the differences between individual knowledge built a kind of “role” inside the team but, after all, we always tried to have fun together and never thought about it as something negative.
Since January 2015 we started working more separately, each one of us on different projects like Continuum, an audio-visual piece by Cinzia Campolese herself, or still working together but not as a whole group, like in the project Level by Cinzia and Erminio Serpente, or an architecture one for a music studio near Paris, that we’re going to release soon, by Marguerite Anthonioz and Regis Mandrillon.

Team IF is specialized and focused in light, ranging from architecture to audiovisual installations, set and object design. Why light? And what are the advantages and disadvantages of working with it?

We always had a common interest in light in our different disciplines. Light can deform, hide and reveal space in different layers. It is a fascinating tool, but it must be controlled and studied every time, for each intervention. This study allows us to discover different kinds of techniques constantly, never mind what kind of project it is. These aspects are both advantages and disadvantages at the same time.

In order to work with light and installations one must have technical, technological and informatics skills. Is your creative process more likely to that of an engineer or to that of an artist?

Technical knowledge, most of the time, can actually create and define the final artistic intervention. We are always concerned about the technical part, but we prefer to keep it simple: simplify and purify in order not to be constrained by technology. We try to be or work more as designers than as technicians, and, most importantly, to have fun in that simplicity we look for.

Who are the artists working with light and technology that inspire you the most?

We all have our own favourite artists, but some of the ones who inspire all of us are Olafur Eliasson, for his artistic interventions focused on light; Cantoni Crescenti for their remarkable studies on perceptions and the natural interaction with the public through their installations (for example, the tunnel; Alvaro Siza, for his work on natural light that we found in his projects and hand drawings, and his great accuracy of communication through his projects; and Peter Zumthor, for his emotional approach to architecture – he believes that light, materials and atmosphere are the most important aspects of architecture.

You’ve collaborated with the art publication KSAT several times: you designed an exhibition set (with lighting effects coordinated with music) for them, amongst other projects. Tell us more about the experience.

The most fun part of the collaboration with Ksat magazine was the ephemeral part of the project, called ksat camp: a series of events linked to the launch of the latest issue of the magazine. For each event we create a series of several happenings on very short time: from covering the interior of a house on plastic sheet and tape (plast-if) to creating a trompe l’ceil installation inside the old SNCF training centre and locker-room (sortie d’usine). From mapping an entire wall of a little recycling workshop, full of tools and old machines (else - if) to our first project 125.25, an exhibition and audiovisual installation for the final Ksat issue magazine of the year. 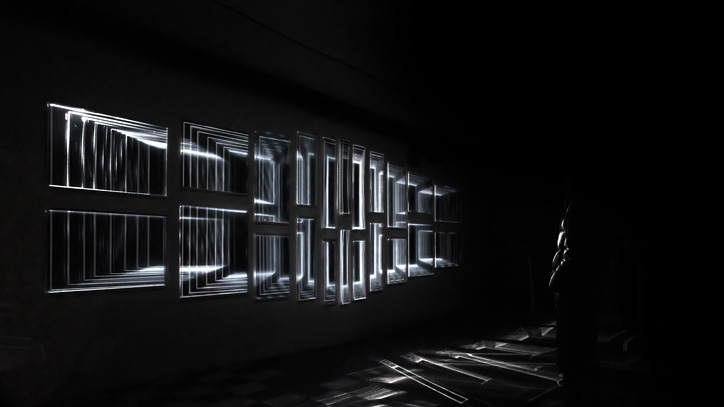 “Apophenia”, a project you presented at BAM Festival (Belgium), is about the experience of seeing patterns and shapes where none exist. What’s the aim behind it? What do you expect the public to feel or think?

Apophenia comes from the Greek apo (away from) + phaenein (to show). With this installation we wanted to offer an intuitive view that leads the audience to discover concealed patterns through the use of shapes and hidden symbols that merge with the real objects. This project was born from the need to experiment within different fields of work, object design and audiovisual installation. The lamp alpha, which is the main part of this installation, was created to live outside the audiovisual piece. A household accessory with a sort of poetic background (which is to be linked to an existing art installation).

And last year you collaborated with Nina Broniszewski-Madre to design the scenography of “La Putain de Toi”, a performance show held in a theatre.

The choice of this kind of scenography came from Nina’s script. The story is about a struggle inside a couple in which the main character reveals different sides of her consciousness through three other characters. The whole set design system is conceived to show the internal struggle amongst the four characters and represent a “mental structure” on stage. The four frames allow to create different types of positions and scenes. Each set changing comes with projections and light switching game in transparency; and everything was built together with the actors, allowing us to place them at the centre of the entire process.

Is there anything you would really like to do and still haven’t?

A big black box that changes every time, with no visual edges or planes or exit… this is going to be tricky, but why not! But, to be serious, we would love working more on architecture projects involving the cultural and music field and, of course, having the opportunity to keep experimenting on different kind of artistic and design interventions.

Since January 2015, we’ve started working on several projects. Cinzia has recently presented Continuum, an audiovisual piece and an on-going project called 3steps – a decorative object and visual installation. She is also working on other projects that involve the creation of new environments and artworks using reflecting materials.
Marguerite and Regis are actually working on an architecture and design project. They recently won the ici Montreal prize for the creation of a wooden stool. Erminio is currently developing researches on his own architecture projects as well as on exhibition design and scenography competitions.