Uniting the creative youth of Ukraine 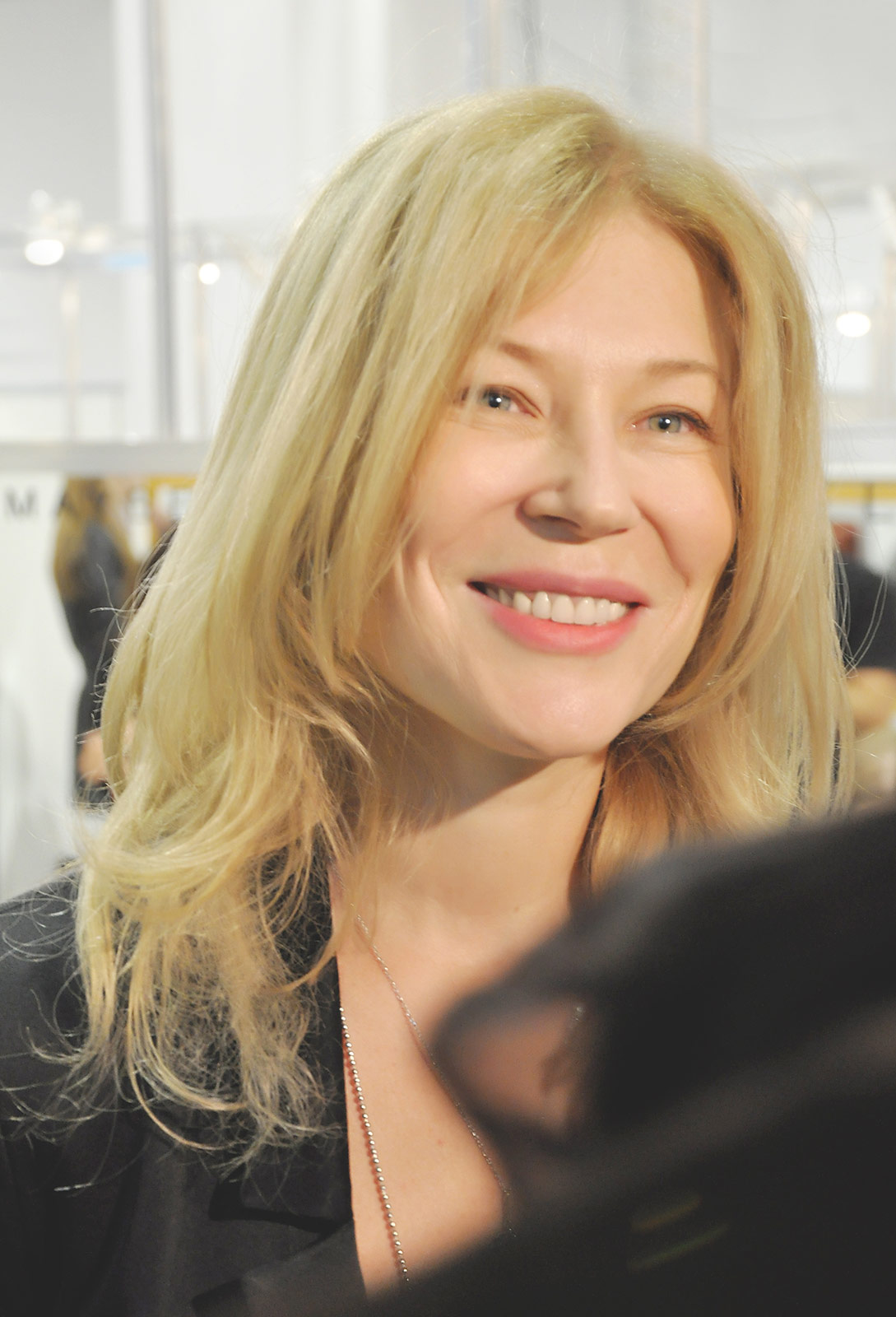 Inspired and affected by the world around it, Support by Poustovit is taking the newest generation of creative youth in Ukraine and uniting them to create a project that is more than just your ordinary fashion brand. Lilia Poustovit, founder of the eponymous womenswear brand Poustovit, is the force behind this new streetwear collective with the group’s inaugural collection taking inspiration from the city of Kiev and its symbols. We had a chance to talk with her about her desire to start this project, her thoughts on the current state of fashion, and her hopes for the creative future of Ukraine.
Tell us about Support by Poustovit and how it came about as a platform for the newest generation of young talent in Ukraine.
For me, this is a very important aspect of the activity. I do not know why, but even when I was just creating my brand, I was thinking not only about personal development and influence but also about Ukrainian fashion as a phenomenon, in general. Therefore, even on the Poustovit page, there was never a lot of information about me personally, and in all interviews, I spoke on behalf of the team, using the pronoun ‘we’, not ‘I’.
Over time, we all started to work together on the Support by Poustovit project because this, on the one hand, makes it possible to attract a new audience, and on the other hand, the fact that the same team is engaged in such different projects is both difficult and interesting, and it really expands the opportunities and skills of all of us. Of course, I’m personally more focused on the main brand and give autonomy and trust to the team in Support.
To unite creatives from different fields such as photographers, graphic designers, stylists and more together must be a difficult task. Why do you believe collaboration is important, especially in creative fields as diverse as these?
This diversity seems very important and actual to me. The team approach of decision-making seems even more relevant to me now. We are all very different and we have different strengths. And together, we make a really strong product. Since each time we attract different artists, stylists, video directors, and photographers for a new drop, it gives us the opportunity to not focus on one image and stylistics. This is enriching in all senses. 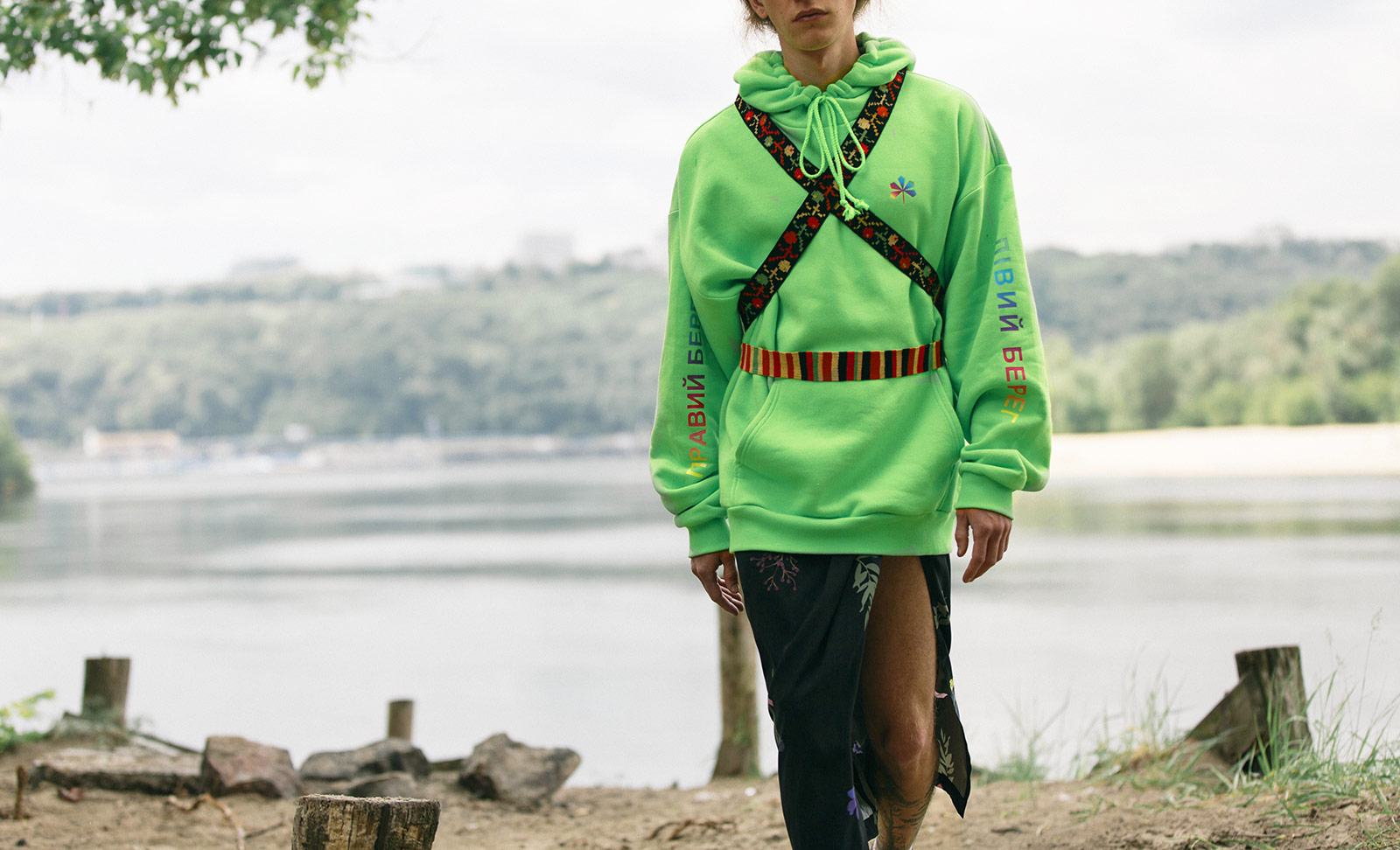 Compared to Poustovit, which focuses on feminine silhouettes and distinct prints, Support by Poustovit has a more streetwear approach/attitude. Why the change in style for this brand? Do you think the styles of the two brands could actually complement each other?
At some point, I realized that the Poustovit framework is somewhat narrow or it can’t possibly catch the audience that has grown over the past ten years, and with which I would like to communicate in a language that it understands. Also, I was interested in taking part in something new and fresh, to do the challenge for the team and for myself. However, I can’t say that Support is completely unrelated to the main line; it inherits some of its core values, such as quality and relevance, and of course, they can complement each other.
For the first collection of the brand, Kiev and its symbols play an important role. The chestnut and the left and right banks of the Dniepro River are heavily referenced. Why use such specific symbols for this collection? What is their significance?
For Ukraine, the Dnipro River is very important, historically and even metaphysically. And when we write left or right bank, we also mean that geographically, the right bank of any river is always steeper/cooler/higher – and, historically, fortresses were built on the right banks. The left banks were usually populated much later. For us, the chestnut really is like a sign of the city and its symbol. In the Soviet times, it was used a lot in very beautiful aesthetic forms and manifestations. Perhaps we will help it become as famous as the Adidas lotus, why not?
The collection also uses vibrant colours and carries a joyful tone inspired by the optimistic and youthful perception of a child. Is that your mission for the brand? To represent an optimistic view of the future for creativity and fashion possibly as a result of Ukraine’s past?
A positive view of the world is very important for us. There are a lot of not-very-happy people in the world – they may have not been loved in childhood, I don’t know. If we can add a few positive emotions and make this world a little brighter, we want to do it and do it consciously. In some ways, our whole life is a reaction to the world around us. Today, this reaction looks like this. It seems to me that now it is necessary. Me, people around me, my team – we all need it and we want to influence the changes for the better. 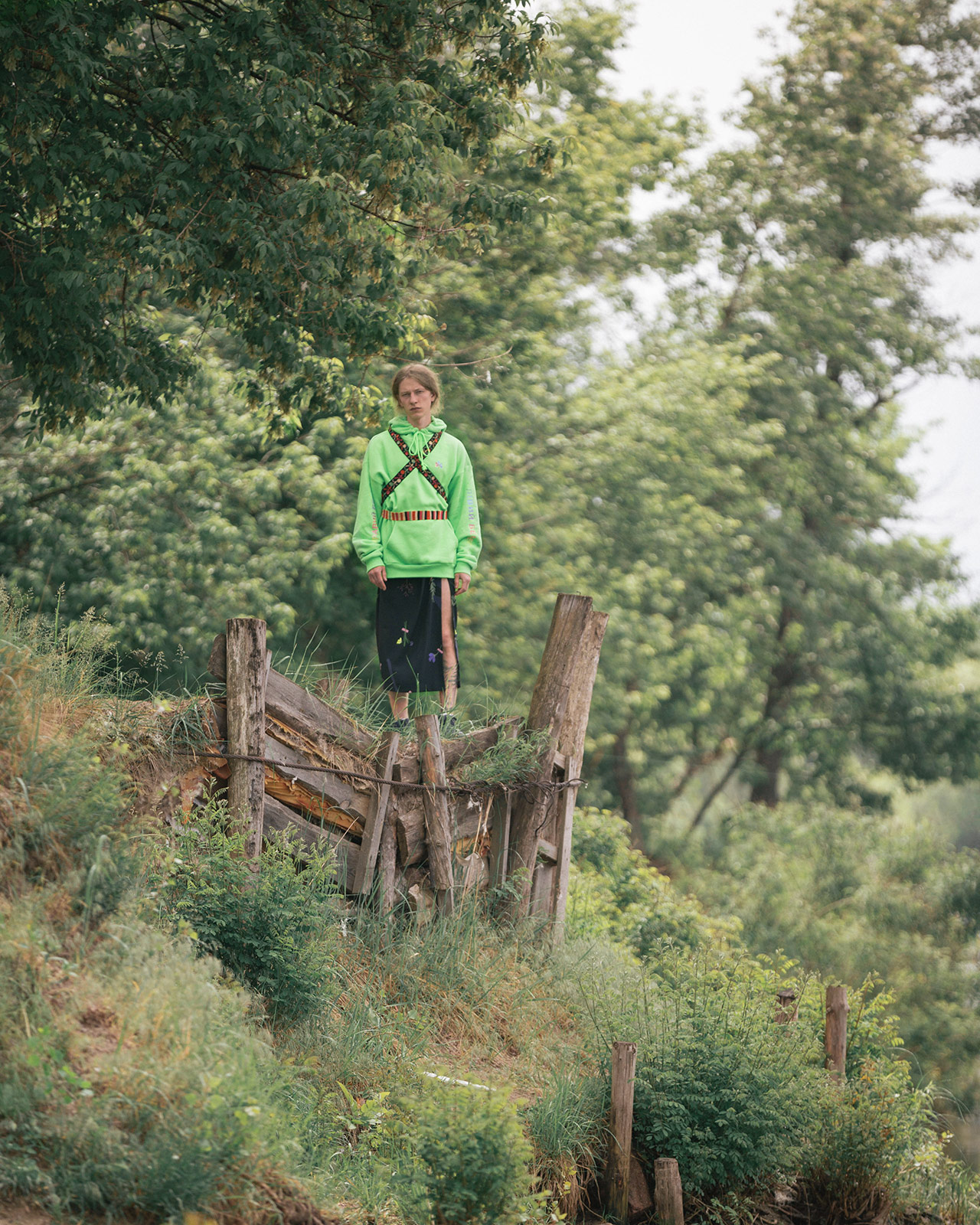 When you first started out in fashion, you spent some time in Paris, one of the fashion capitals of the world. What are the differences you’ve noticed in the fashion environment between Paris and Kiev?
When I was in Europe and worked in Paris, I saw a lot of people around who were enjoying life, a lot of them on the streets: old men singing, lovers kissing, bartenders smiling. And this was a striking contrast to post-Soviet gloomy faces and clothes. Probably, subconsciously, I always wanted the streets of my beloved city to change. This is something that’s moved me all these years. My daughter is growing up. She is very positive and it would be great if she didn’t change this aspect. When she grows up, I hope she doesn’t feel uncomfortable neither on the streets of Kiev nor London.
When I worked on a project with Atelier 1 ten years ago, we were produced by David Foley, and I had to meet with the great guru Adrian Joffe. Somehow, during breakfast, he asked me, “Do you want to do something artisanal, small but truly yours, and not depend on the opinions of other people? Or vice versa?” Neither then nor now can I give an exact answer because, for my whole life, Joffe himself has been an example of the genius of marketing, collaborations, and the attraction of various cool people to commercially successful projects. I like it – to do what people are interested in.
Eastern Europe has a lot to offer the fashion world, with major fashion designers like Gosha Rubchinskiy making it big in the industry. How have you seen the industry change in Eastern Europe, particularly Ukraine, which has seen an explosion in creativity over the years?
To me, Ukranian fashion is very creative. I mean, few designers are focused on commercial goals; instead, everyone is interested in realising creative ideas. In this sense, Ukrainian design is closer to French and English design than to Italian. Ukrainian fashion is influenced by our openness and sensitivity to what is happening in the world. It is very emotional and dynamic. It is quick to perceive all the new ideas and global trends.
What’s next for Support by Poustovit? Do you have any new ideas for its sophomore collection? Is it still going to draw inspiration from Ukraine or perhaps from different sources?
We work with Ukrainian (and in particular, Kiev symbols) because we feel their great strength and energy, and we want to share them. We are not limited locally; for Poustovit, we often look for inspiration in travels, to Kenya or Morocco, for example. There are a lot of places full of energy in the world, and we have a lot of time ahead for a huge field of work and sharing of symbols for a great big audience. 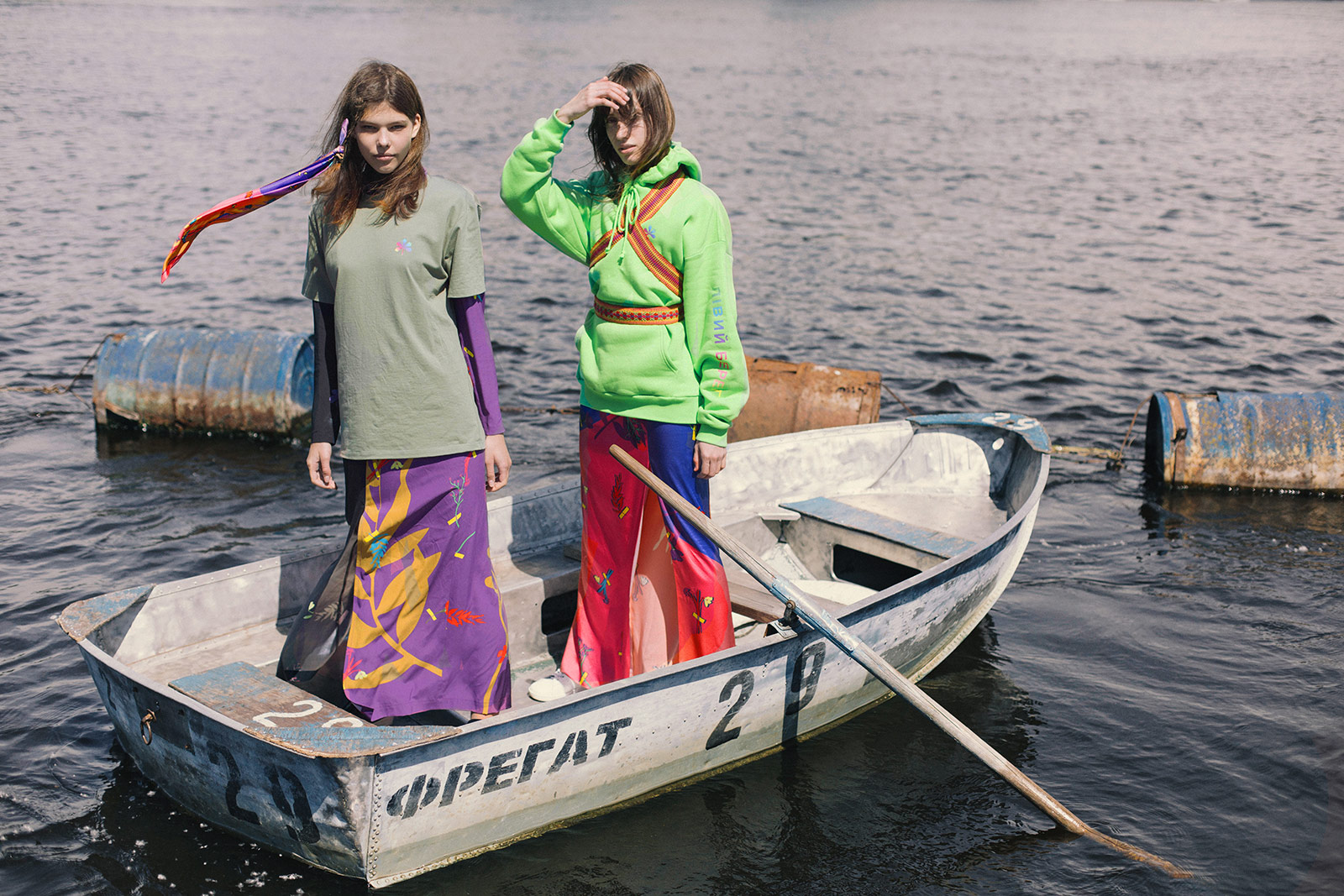 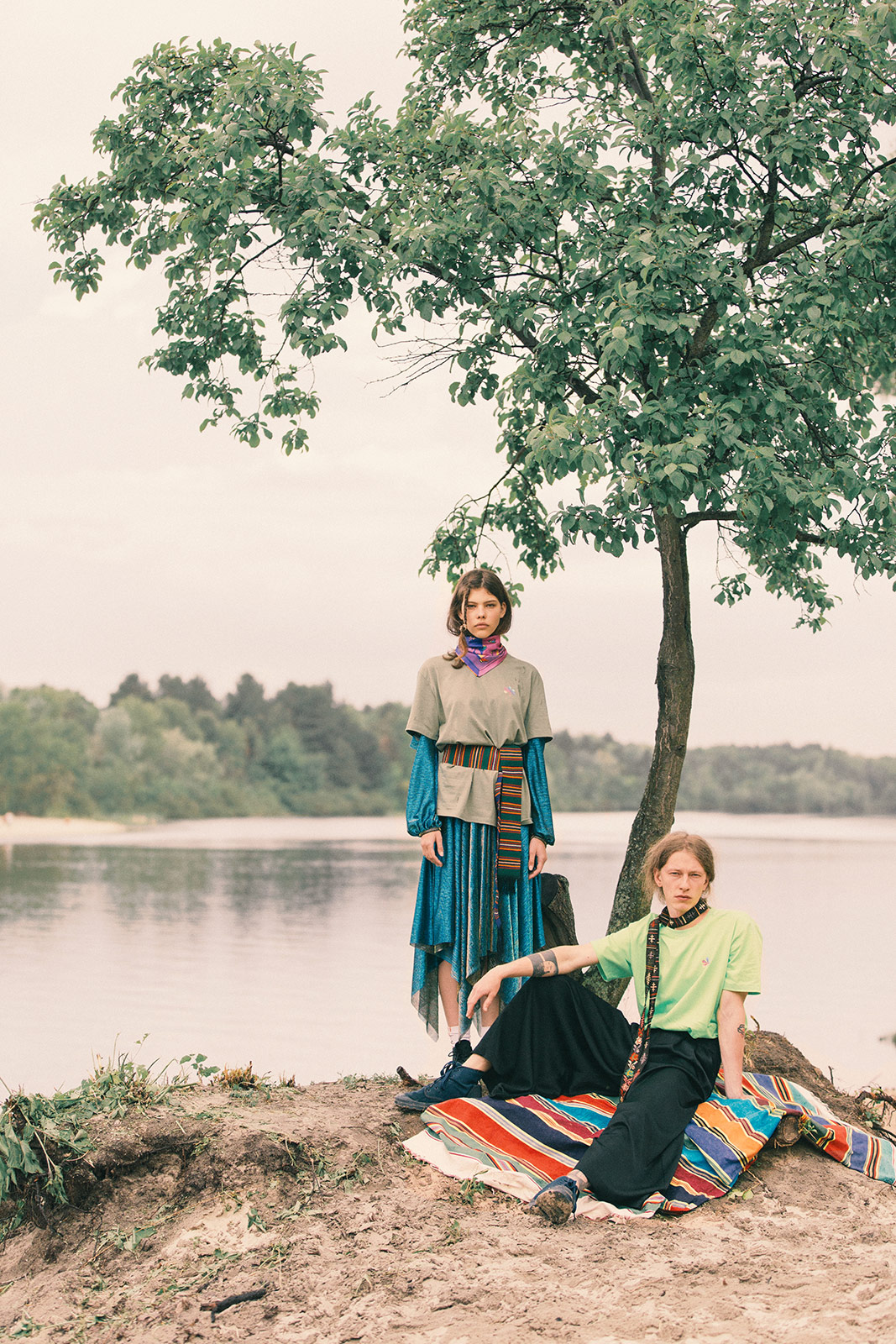 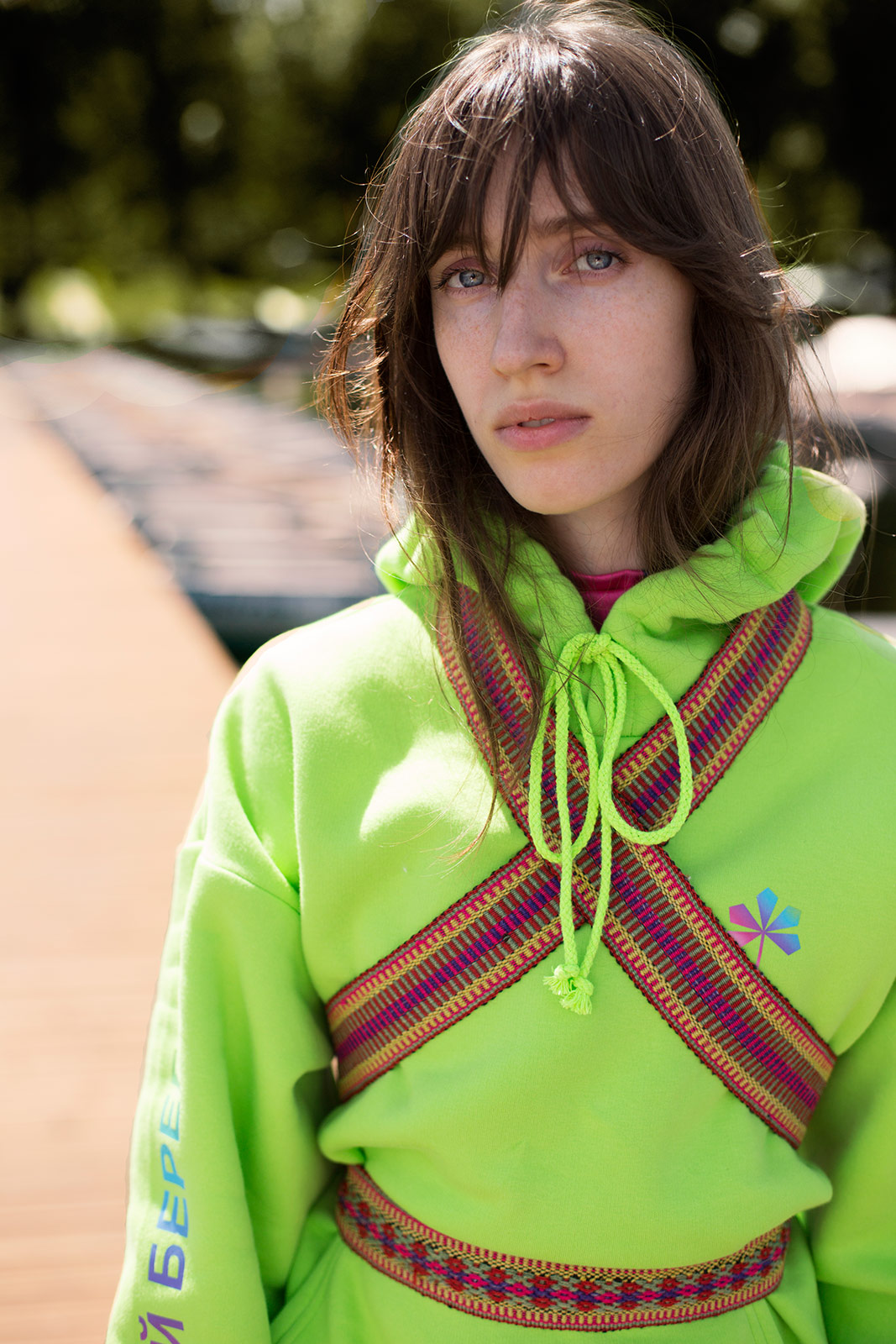 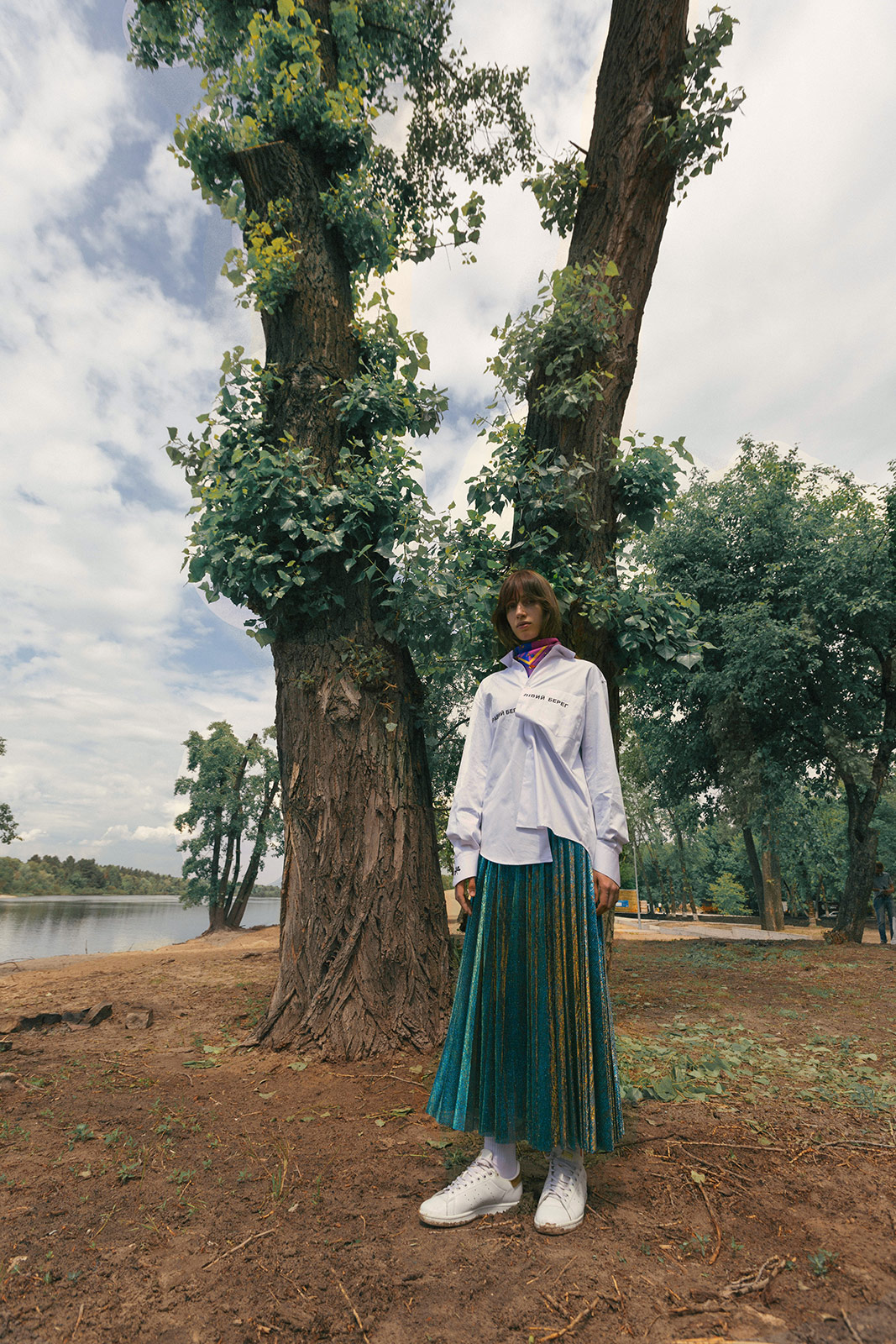 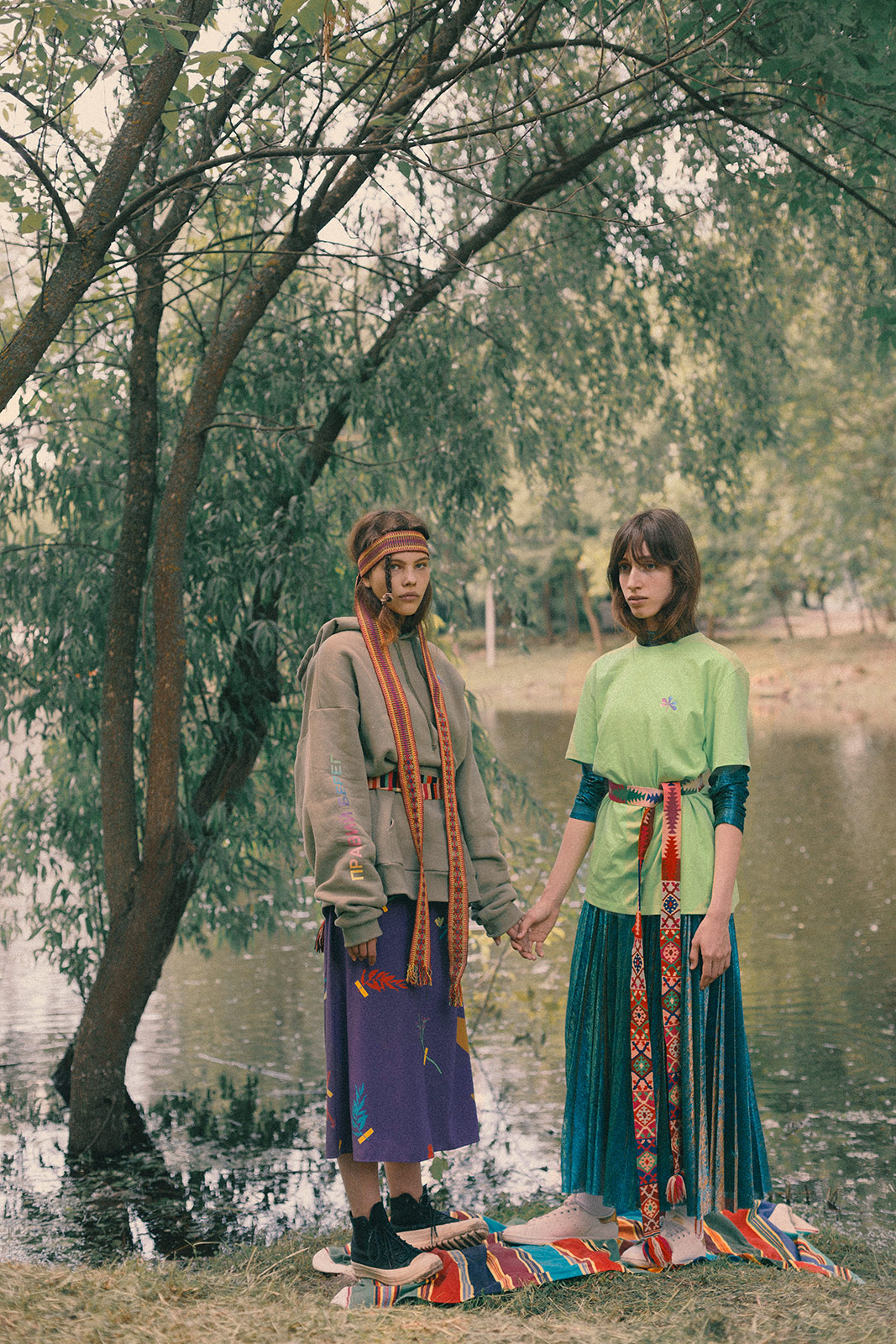 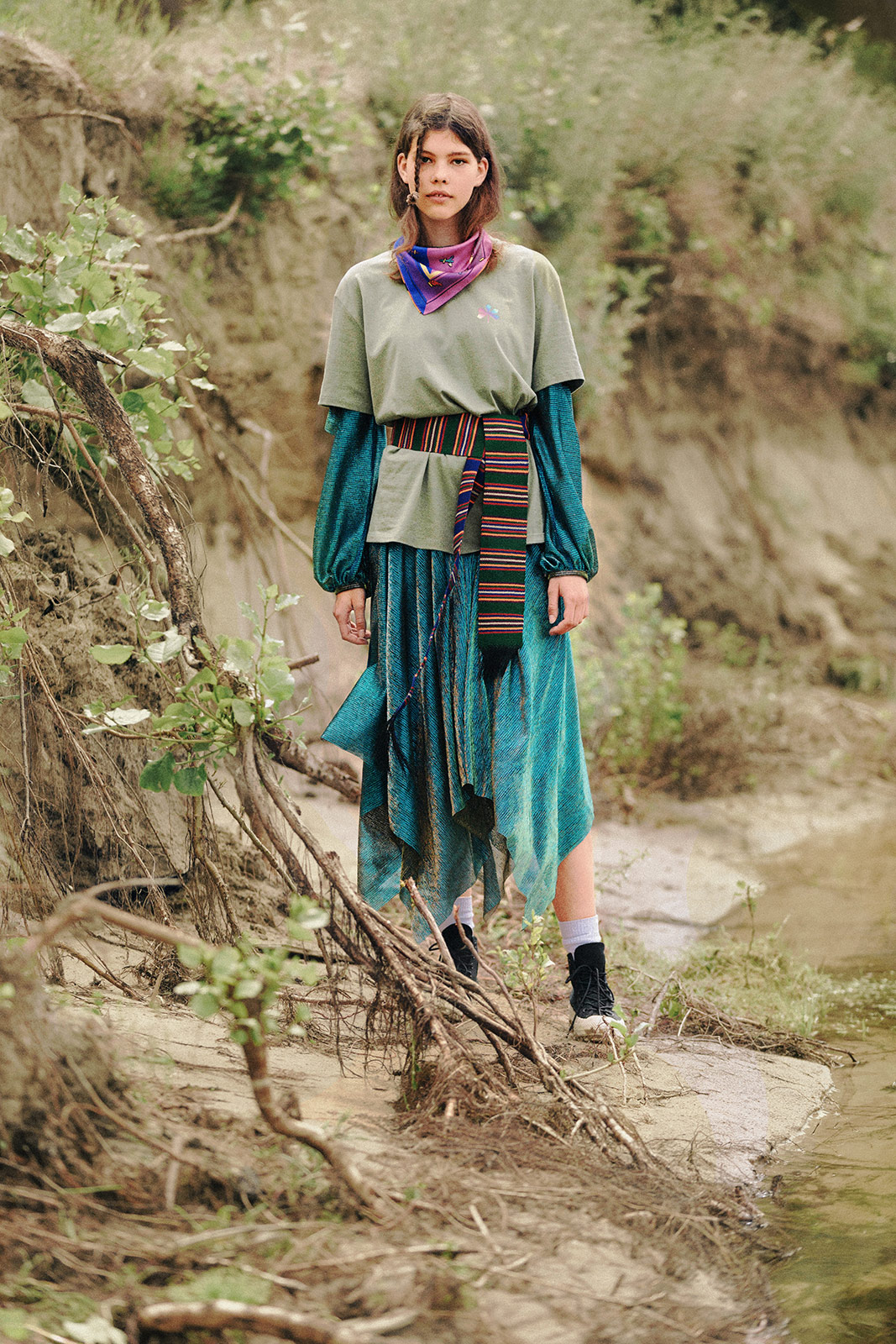 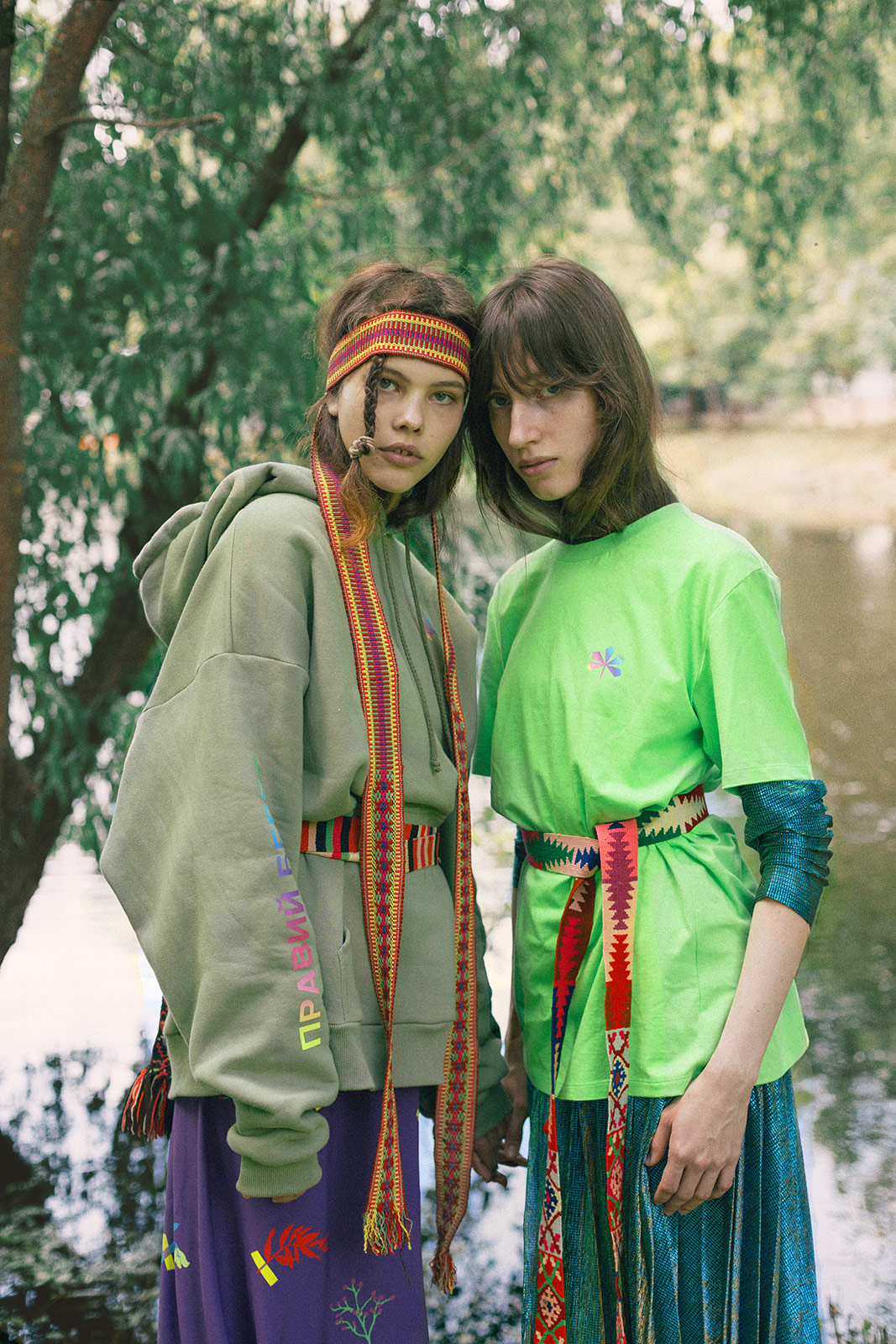 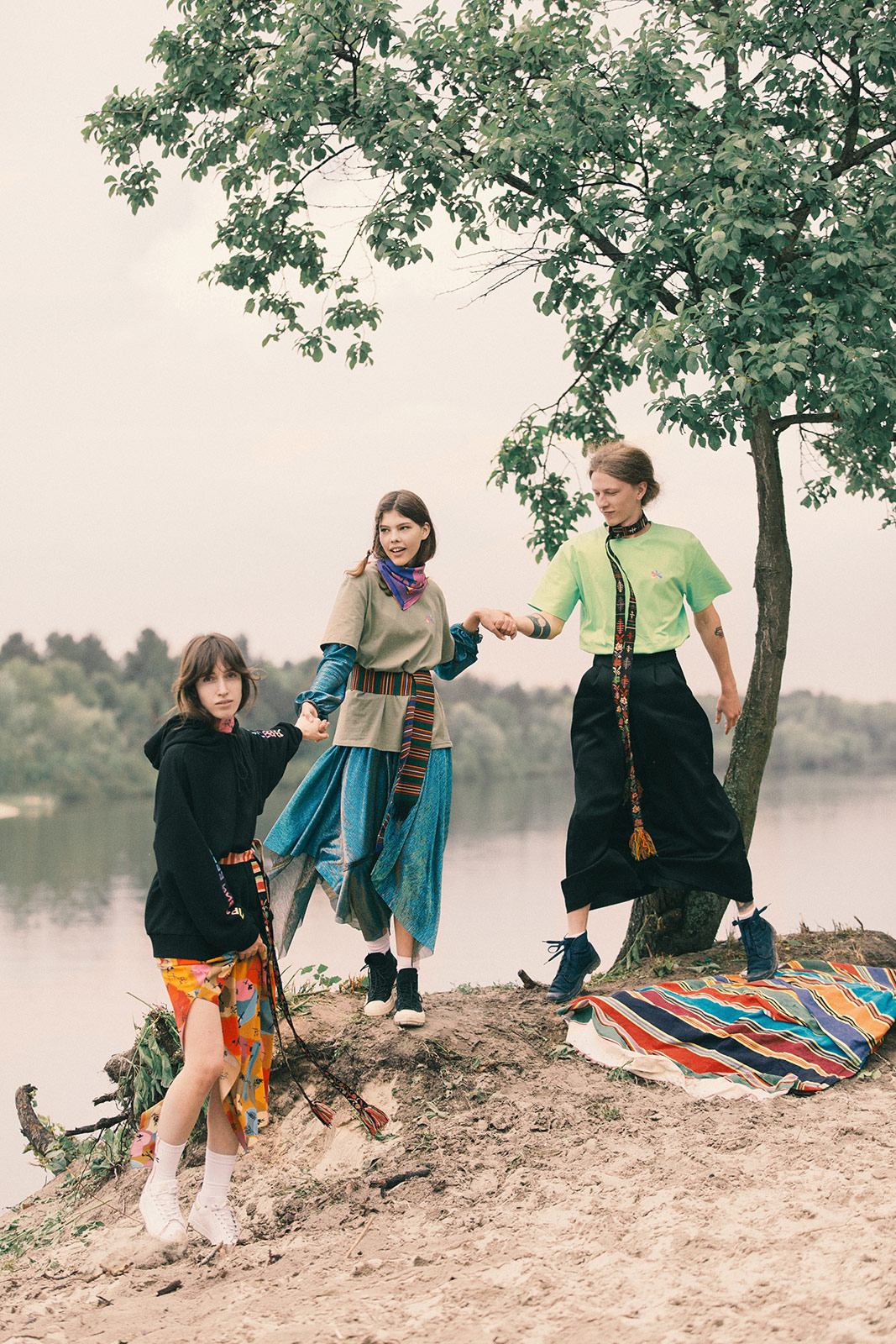