Taking us to the unknown 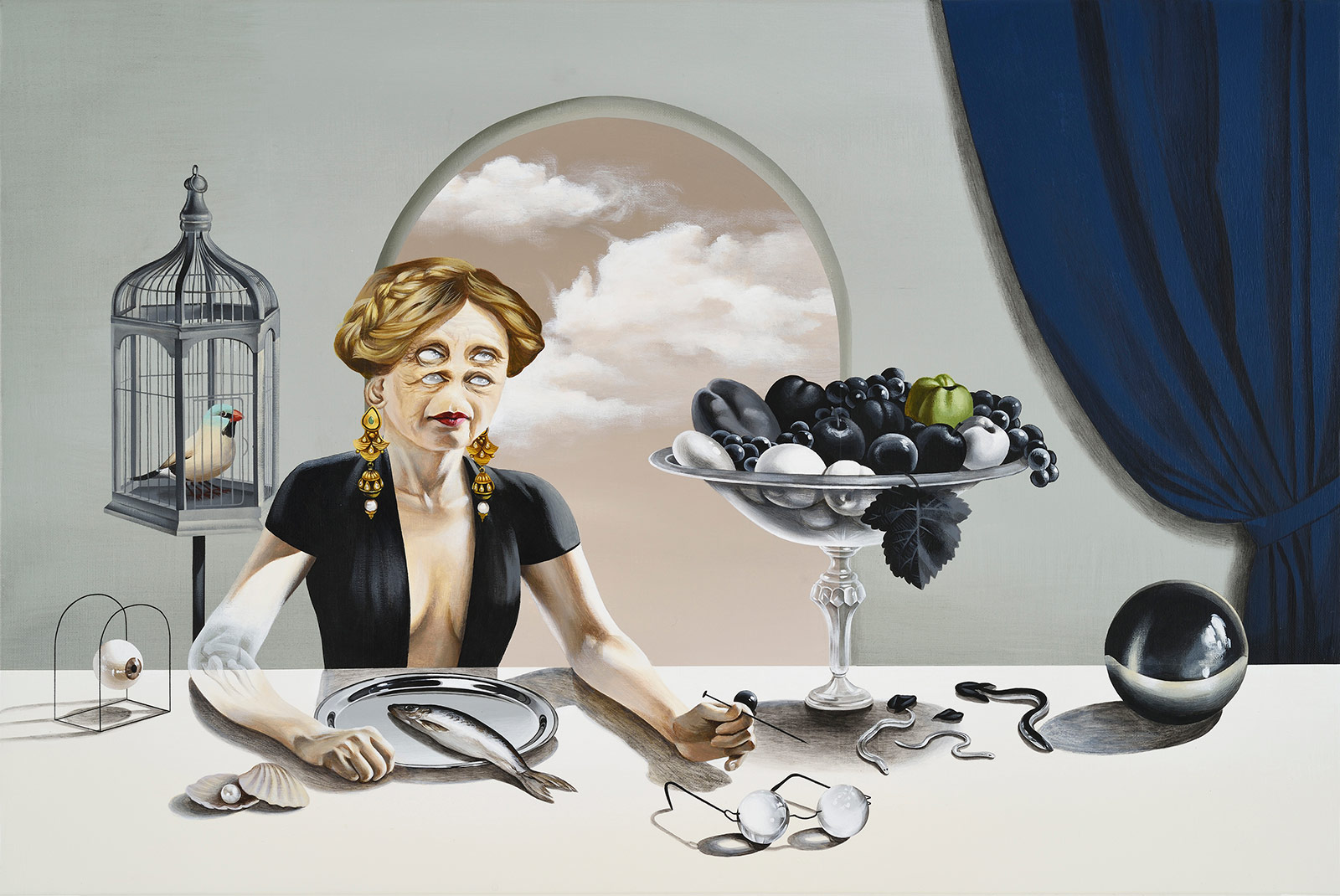 Step into SunHaeng Kim’s world, a dark and macabre place where you will find body parts, skeletons and even octopuses roaming around. For those of you who have yet to connect with the esoteric realm, do not fret, it is as odd as it is sensual and captivating. It is a world that will weird you out, however, once you arrive, you will never want to leave.
First of all, I would like to get to know you a little better. Could you tell us a bit about yourself? How and when did you start painting?
According to my mother, I have been drawing pictures since I was two years old, although I know that it’s not unique. Many young children grab a crayon and scribble around the house. Anyway, I started painting at a very young age, and they weren’t graffitis without thinking. I think it was about the age of seven or eight when I consciously thought ‘I like it’. I was a little weird kid when I was young, and it was hard for me to get along with my peers. So pictures naturally became everything that surrounded my life.
Your Instagram page is divided into sections, depending on the colour palettes of your work. Your red and pink paintings feature geishas, the blue ones are very sexual, the black ones refer to the 1920s style, and so on. They do not seem to have a lot of correlation between them theme-wise, however, what ties them is your signature style. How do you decide to start a series, and what inspires you to choose a certain colour palette?
The reason why I divided pictures by colour on Instagram is that I considered the characteristics of this medium itself. People do not show much patience when scrolling, so I felt the need to divide the pictures by colour and make them look better. Red is my favourite colour, which is calmer, denser, and more sensual and violent than others. If you set colour red and draw a picture, inspiration easily comes up compared to any other colour, and the work progresses quickly.
The results are also satisfactory. However, I did not want to settle for one hue, and using red often resulted in excessive energy and emotions in my screen, making it too heavy. So I approached other colours to control this, and then I felt quite charmed by using them. I have four or five series of different themes. Each series is like a tree, which is connected by one root but branches out. Some series may go on for years or decades while others are transitional. 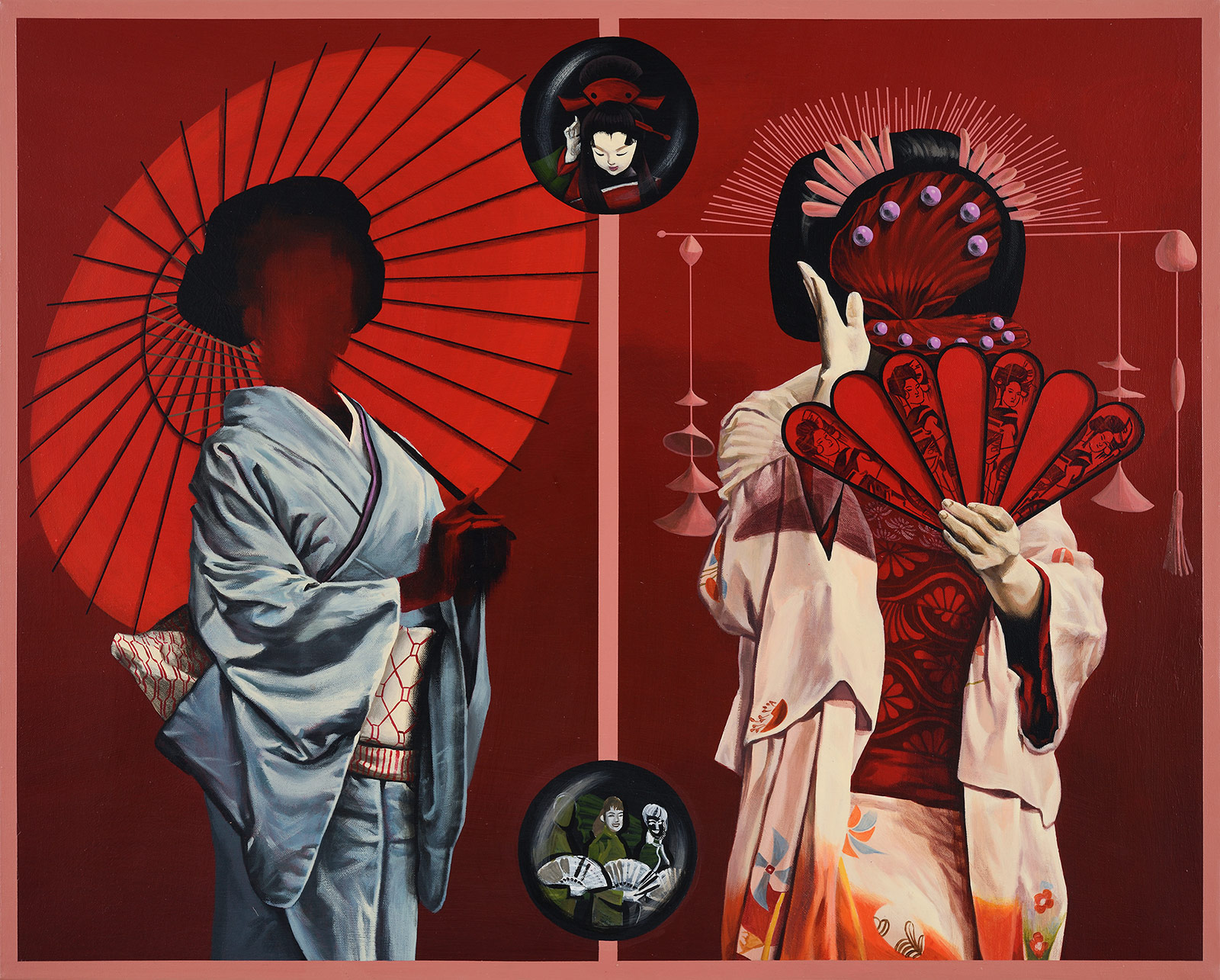 You are based in South Korea, but your work seems to be influenced by Japanese culture, especially by ukiyo-e, geishas and the shunga genre. What is it that draws you to this kind of imagery?
I like to draw traditional Japanese women dressed in kimonos. Rather than having any meaning, I am attracted to the magical charm of the image. The silhouette of kimonos descends vertically and spreads broadly from the bottom, and this particular line is very sophisticated and has no discomfort even when worn with modern costumes. Also, because it is a body wrapping design, the body is exposed when the waist strap is released. It is the traditional costume of a country and its charm comes from being a non-contemporary dress, which is static yet very sensual, occasionally extravagant and sometimes very subdued. I felt that these clothes, which had an intense energy that cannot be defined, were similar to the character of my work.
You seem to mix aspects from Western and Eastern cultures, as well as elements from the past (like temples) and the present (like test tubes and magnifying glasses). What is the message you are trying to convey? Do your Korean roots and the its development into a more Westernised country influence this?
It was for two reasons. First of all, I draw pictures of traditional Japanese cultural elements, mainly kimonos, because they are mysterious and beautiful, as I already mentioned, and not because of the international, political and social meanings. However, people were constantly trying to interpret this. I am a woman, Asian and Korean, but I didn’t choose to be so and I don’t even define my identity because of this. I’ve always just been me. People from Korea, which is a country with a historically problematic relationship with Japan, need some explanation because they don’t think I can draw Japanese elements just because I find them beautiful.
Also, if some Westerner begins to paint Korean elements, Koreans will be amazed, but eventually will refuse to acknowledge his or her paintings and exclude them from the country’s art scene. Many Korean art experts say it is impossible that those who are born and raised in the West will perceive the fine and semi-emotional traditions of Orient – Korean history among them –, and create with a high level of understanding. Of course, it is somewhat clear that a person who hasn’t grown up in a particular culture may have a lesser understanding of it than those who have. But is there one unique culture? No; it is a mixture of Islam and Western culture, which mixes with China and flows back to Korea, and then it goes back to Japan and goes to Europe. Just as pizza is no longer Italian food but a symbol of America. It does not make any sense to me that the nationality that is given to me at birth is an element for restricting my creation.
The second reason is that I'm trying to create some dramatic tension in my work. I want to draw pictures that would not be accepted anywhere. It should not be too new, too classic, nor too sophisticated, too rough or static. It should not be tied to anything, it should be very intense, but it should not dictate anything. It is my intention as a painter to capture a breathtaking and dramatic confrontation.
What sparked your interest in the macabre?
As a child, I lived with my family on the second floor of a very dark building. In Korea, houses have few corridors and many flat, cube-shaped ceilings. Although mine was not large, there was a small corridor and the ceiling was triangular and pointed. The house was made of wood and the trees were old and discoloured. All my family came late at night and I was in a low-grade elementary school and I was stuck in a dark and gloomy house every day without a place to go. I was so scared that the corridor of this house was so scary that the imaginary monsters and ghosts would always pop out of the kitchen doors connected to the corridors. Now I think that that memory from my childhood, when I was left so alone and terrified furled this interest. Certainly, I opened up all kinds of grotesque imaginations in that bizarre house, and it was very exciting and sensual. 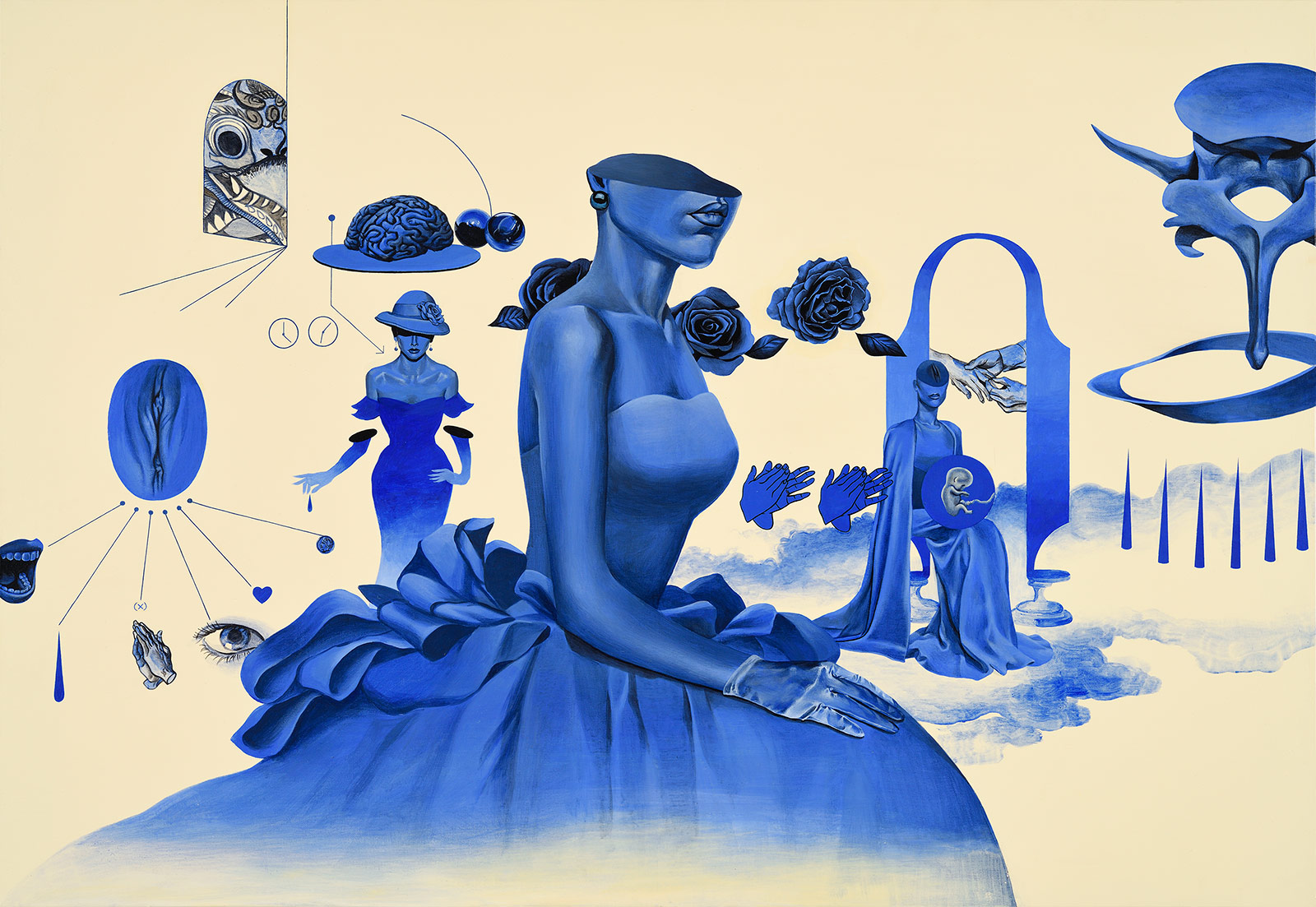 You also depict images of skeletons, human and animal alike, what draws you to these figures?
Drawing bones comes from my interest in death. When we die, we become rotten, smelly, and ugly. Through this corruption process, the bones, finally revealed, are silent. It is tranquil and static. They attract me because they are the most symbolic element representing death; when we are alive, they are covered by skin, muscles and organs, but when we die, they appear. Not only that, but bones are very interesting and sophisticated forms. If they didn’t exist and a genius sculptor created them, wouldn’t they be really original and cool? Nature is full of amazing and wonderful things; no human-made art can exceed it. So what I do is also a kind of expression of my respect for it.
Most of your paintings represent women or feminine men. Is it important for you to show femininity throughout your work?
I grew up watching women talk and act femininely without knowing they were doing so. It was very interesting and I thought we were trained to do some kind of brainwashed gender role play. I wasn’t a feminine girl, which was a disadvantage or an issue when I was younger; but I’m just me. Do I always have to laugh and walk femininely? However, on the other hand, I couldn’t push society’s standards so I felt uncomfortable and inferior. That’s why I do these representations in my work.
As you are a woman sexualising other women, do you feel that you are empowering them instead of objectifying them?
Sadly, this is something people have felt. This can be seen in semi-feminist terms, but in fact, I do not have much interest in feminism. There is a more urgent problem to be solved in this world, which is the abolition of capitalism, and this is essential because there are many other issues that derive from this. The female artists I know usually perform feminist work. They accuse society for the historical persecution of women and how masculine the world is, but I am a bit cynical. I am also resentful of the discrimination I suffer as a woman, of course, but my utmost desire is to become a typical woman loved by a man; I want to be a kind of trophy wife with a wealthy man in a capitalist society.
I think this is not just my own desire, but the desire of many. It’s not our fault; it’s the result of the capitalist brainwashing. The world, however, does not even forgive this desire. How can we have such a snobbish dream instead of fighting the unjust reality of women? Nevertheless, in order to cure the disease, it’s necessary to know the exact pathology and symptoms. We must acknowledge that the reality is like this now, and that we must change it. But the desires we have are not to be blamed; it is important to face them in an honest way. 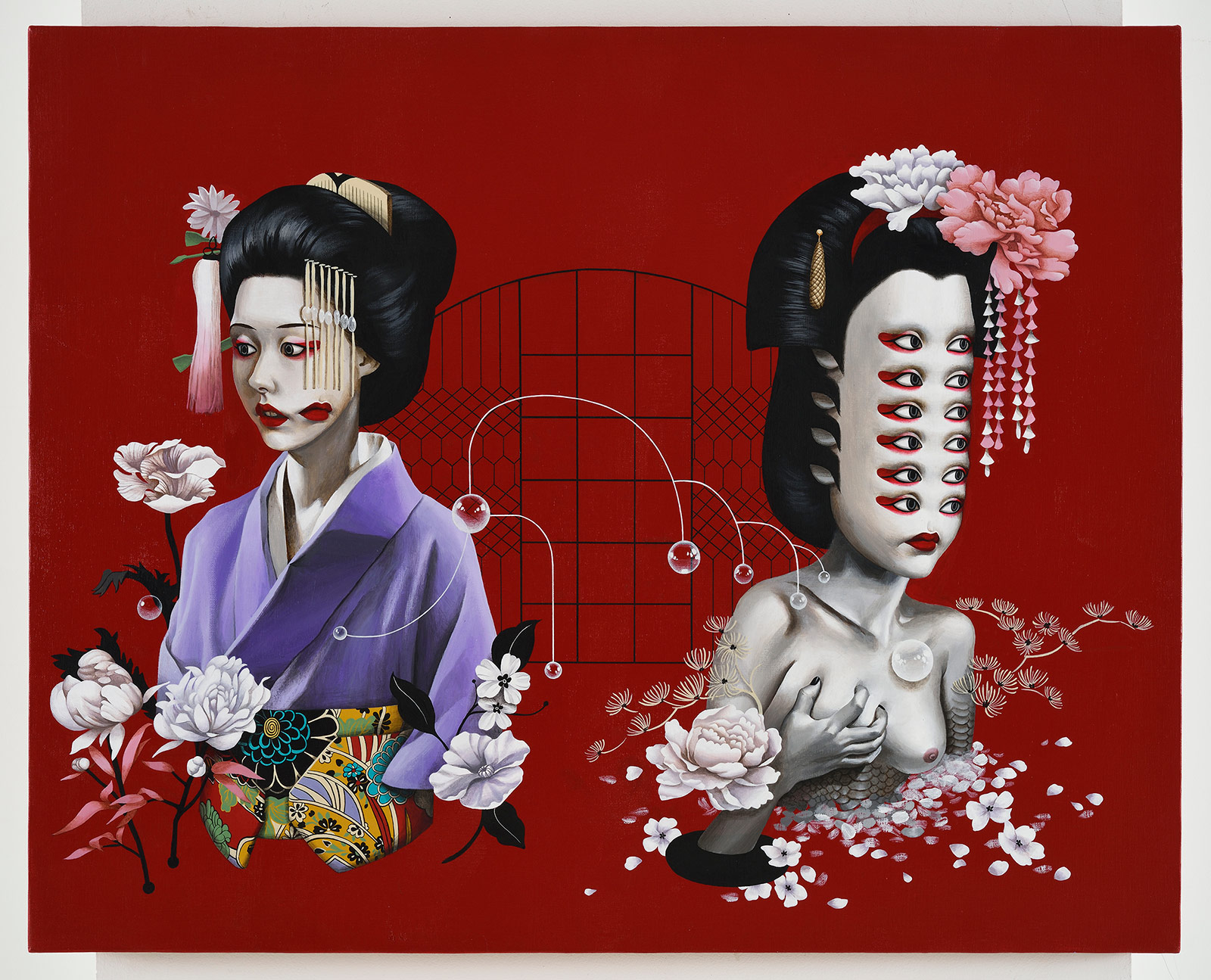 I’ve seen that you have exhibited your work before. Did you enjoy getting feedback from those who got to experience your art first-hand?
Of course. I always wonder what people feel when they see my work.
Can you reveal to us any projects that you are currently working on?
I am designing various series. They are too big to explain them all. However, a recent one is a man wearing makeup and accessories like a woman. Korea is a conservative nation. If a man wears makeup, or if a fat person forcibly decides not to lose weight by dieting, or if homosexuals come out, they will eventually be cursed and discouraged from doing so. I was always choked with this dogma and ideology and I want to break it. Men are usually not complimented for being beautiful, so I did this hot man. But if he wears makeup and accessories, he’s made fun of by society. And my aim is to present a new sense of beauty, a man whose beauty everyone can agree on. That is my goal as an artist. 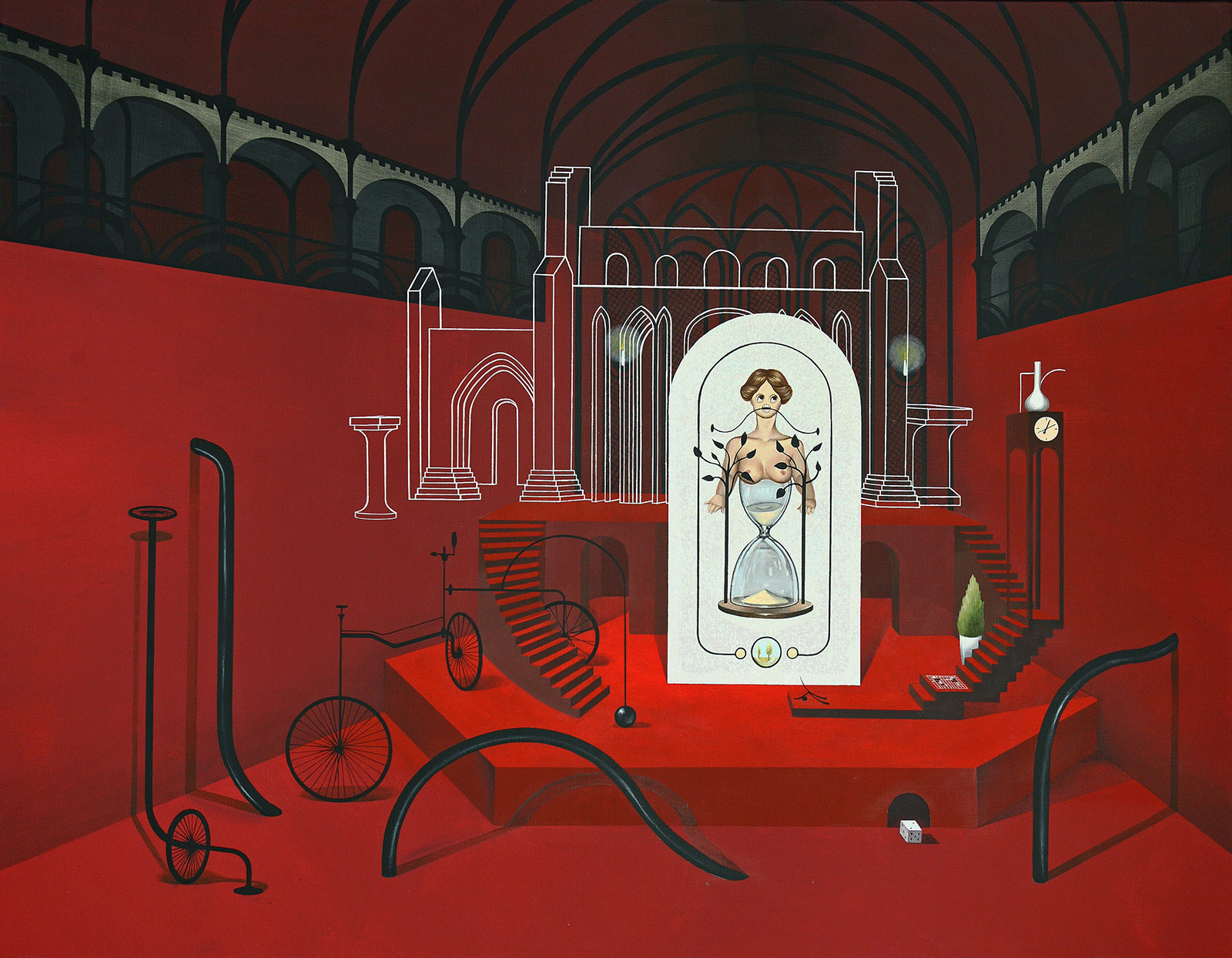 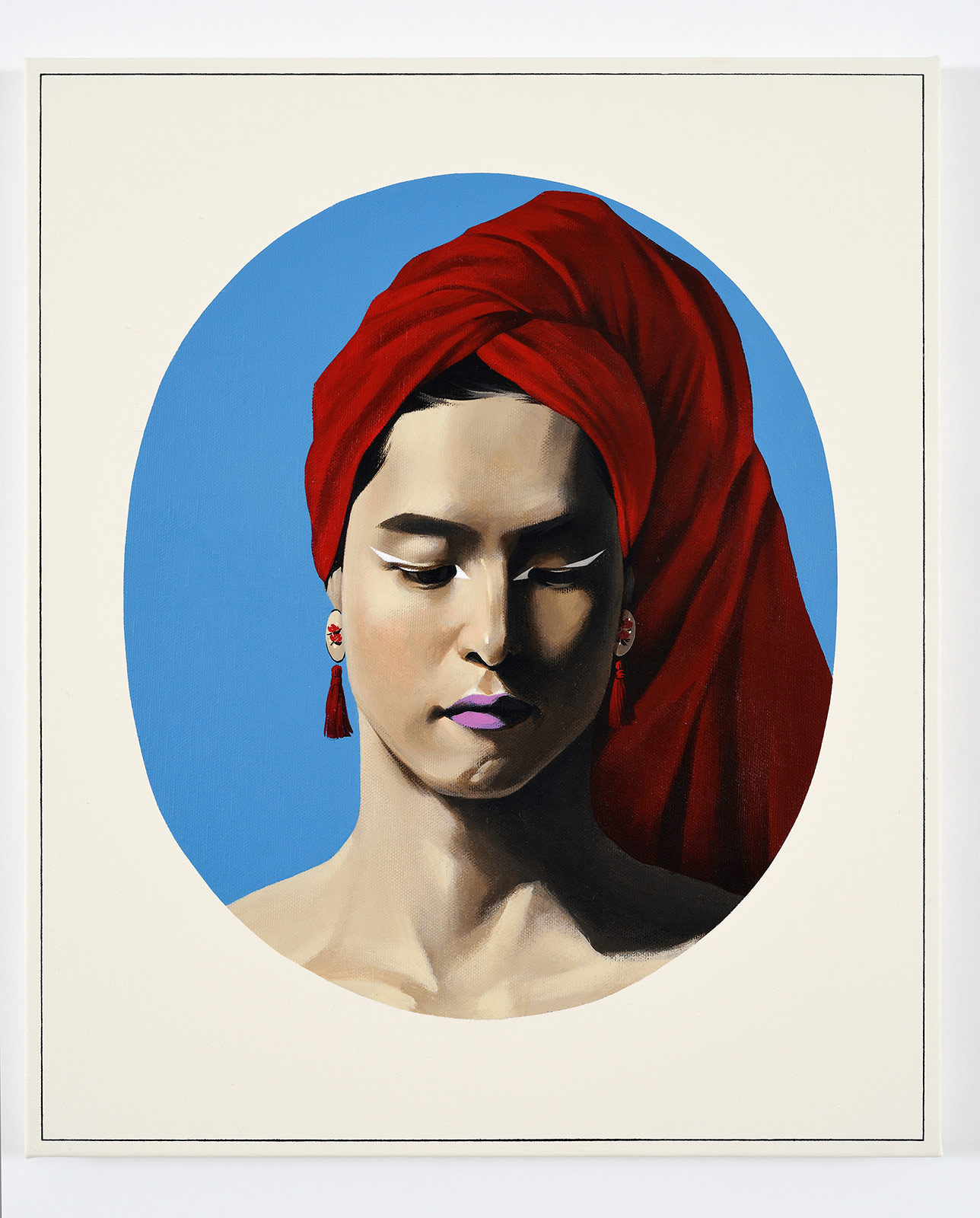 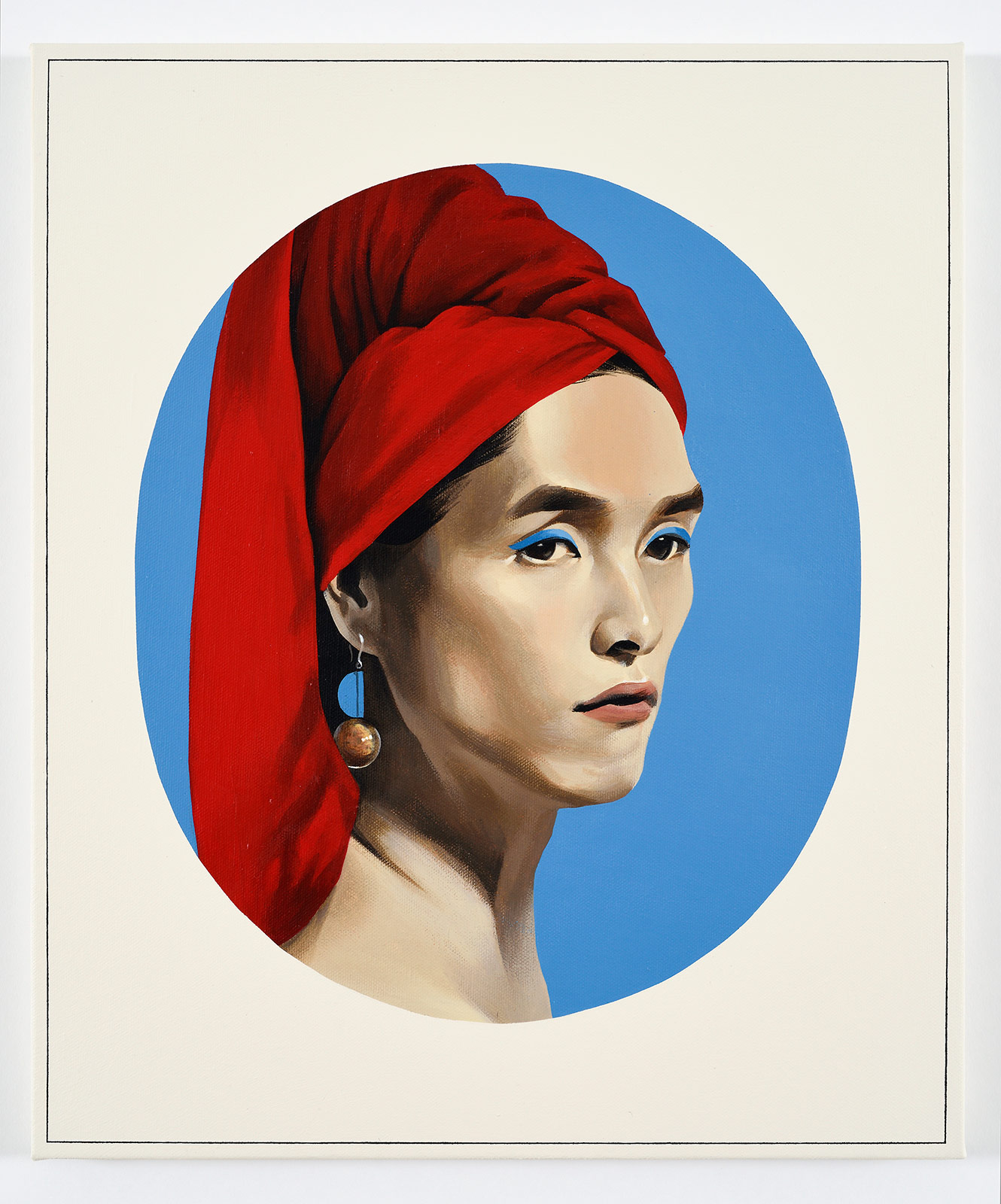 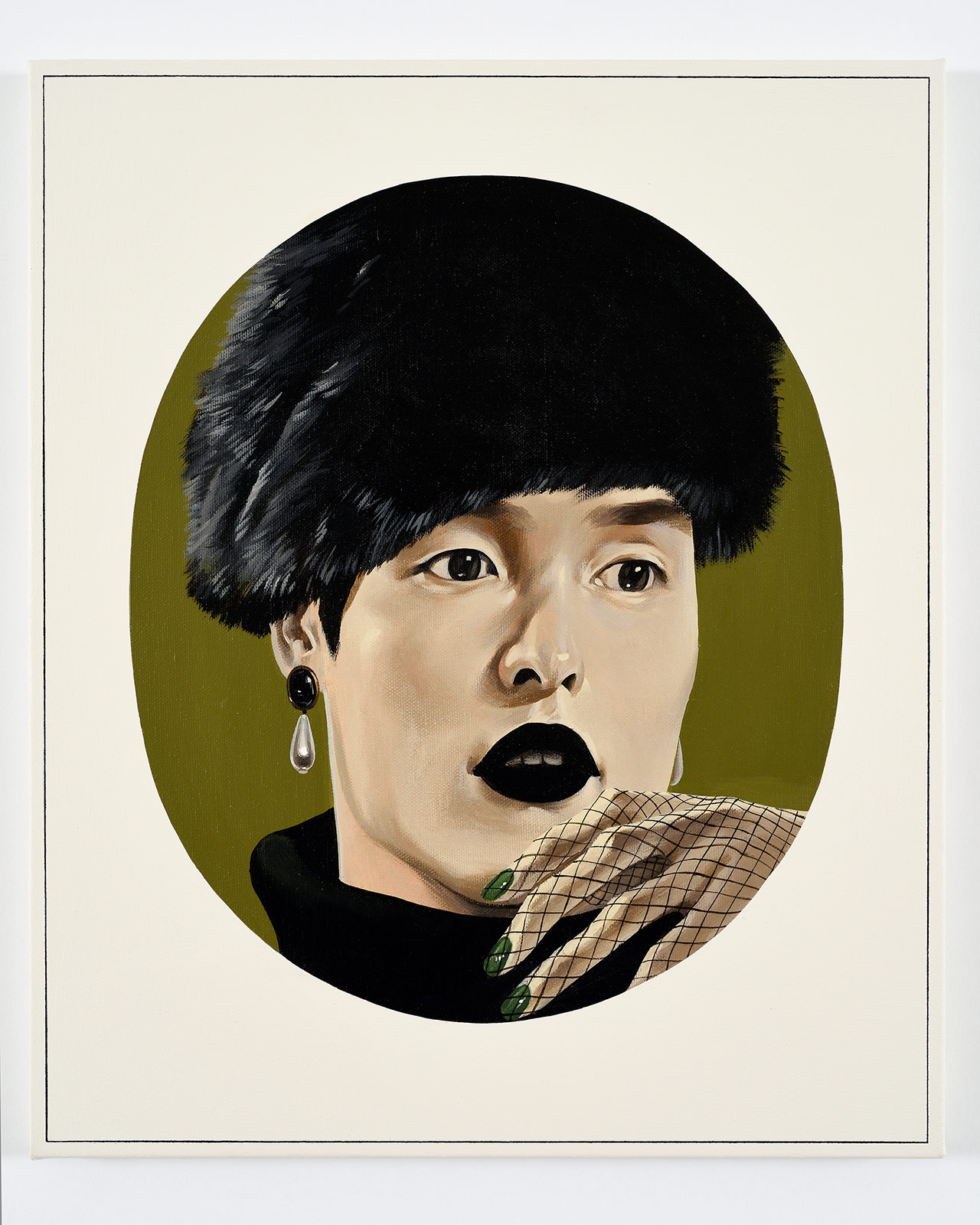 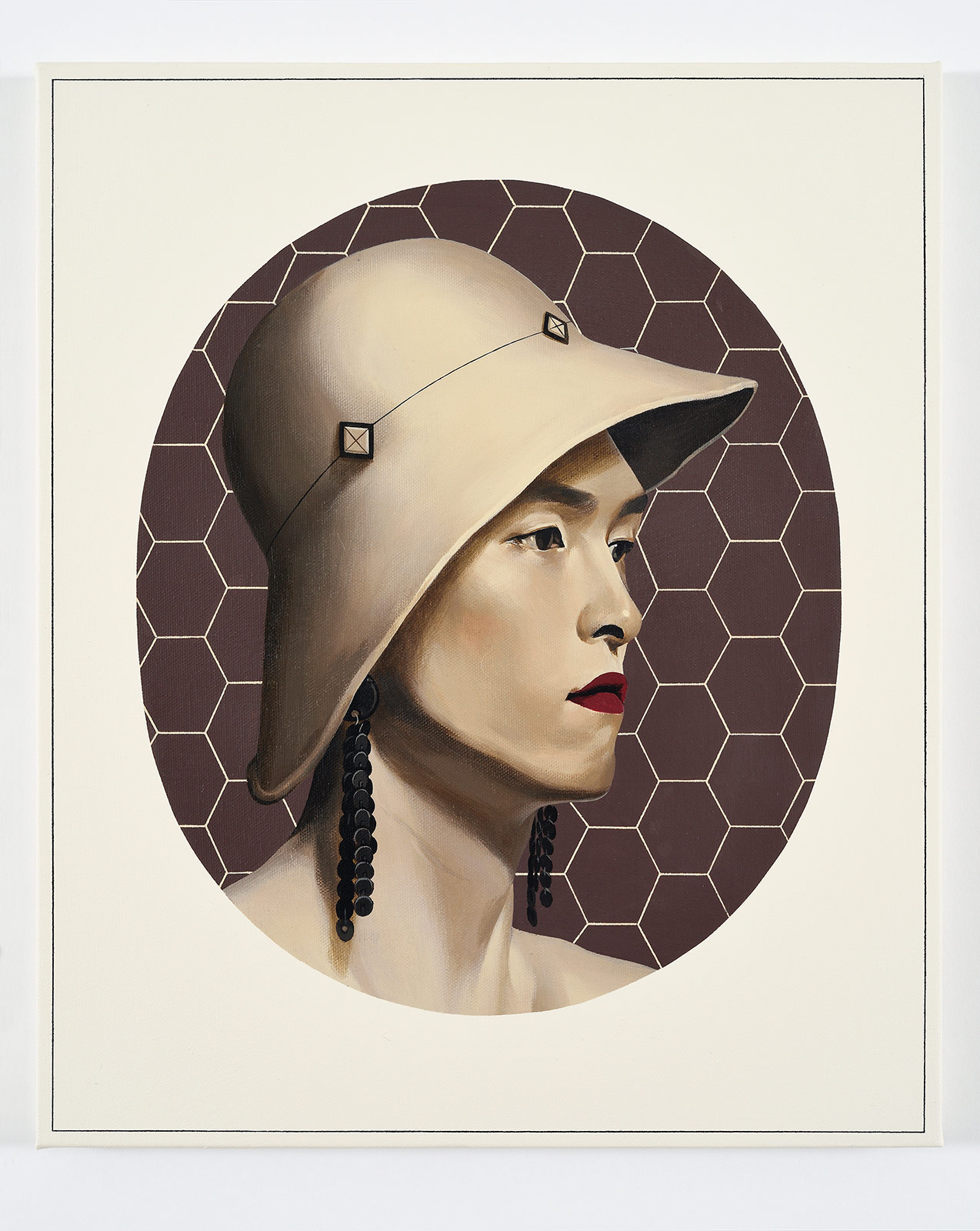 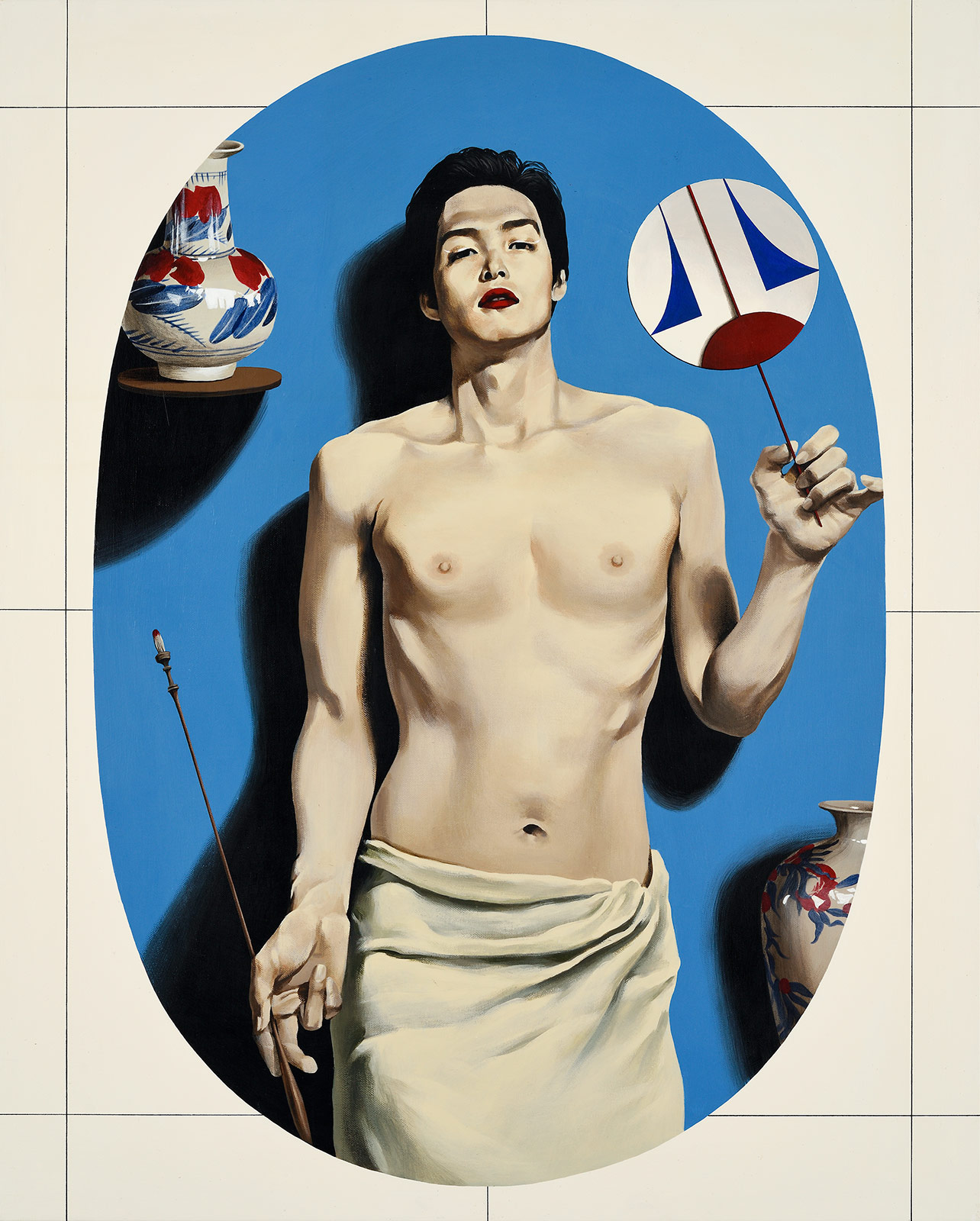 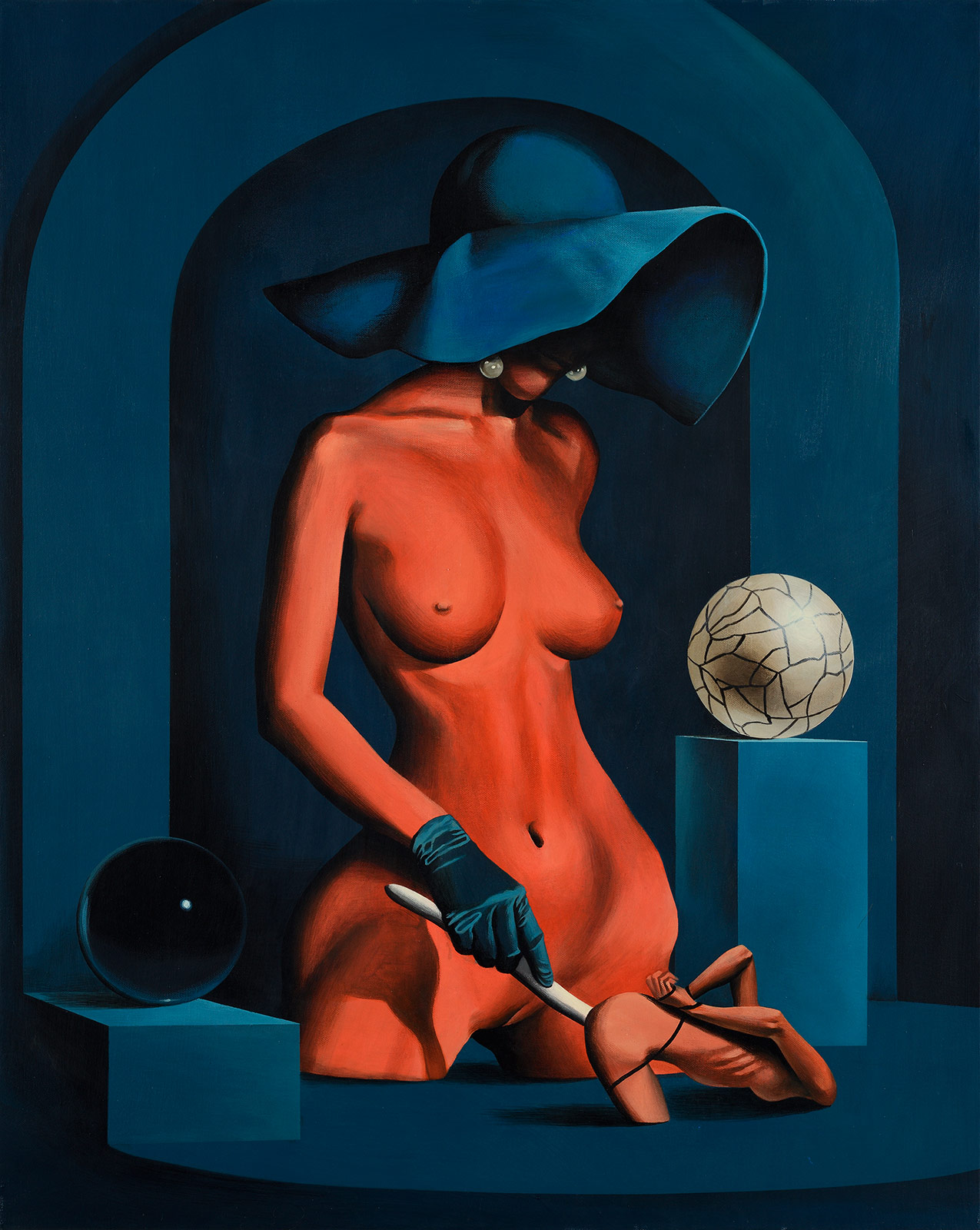 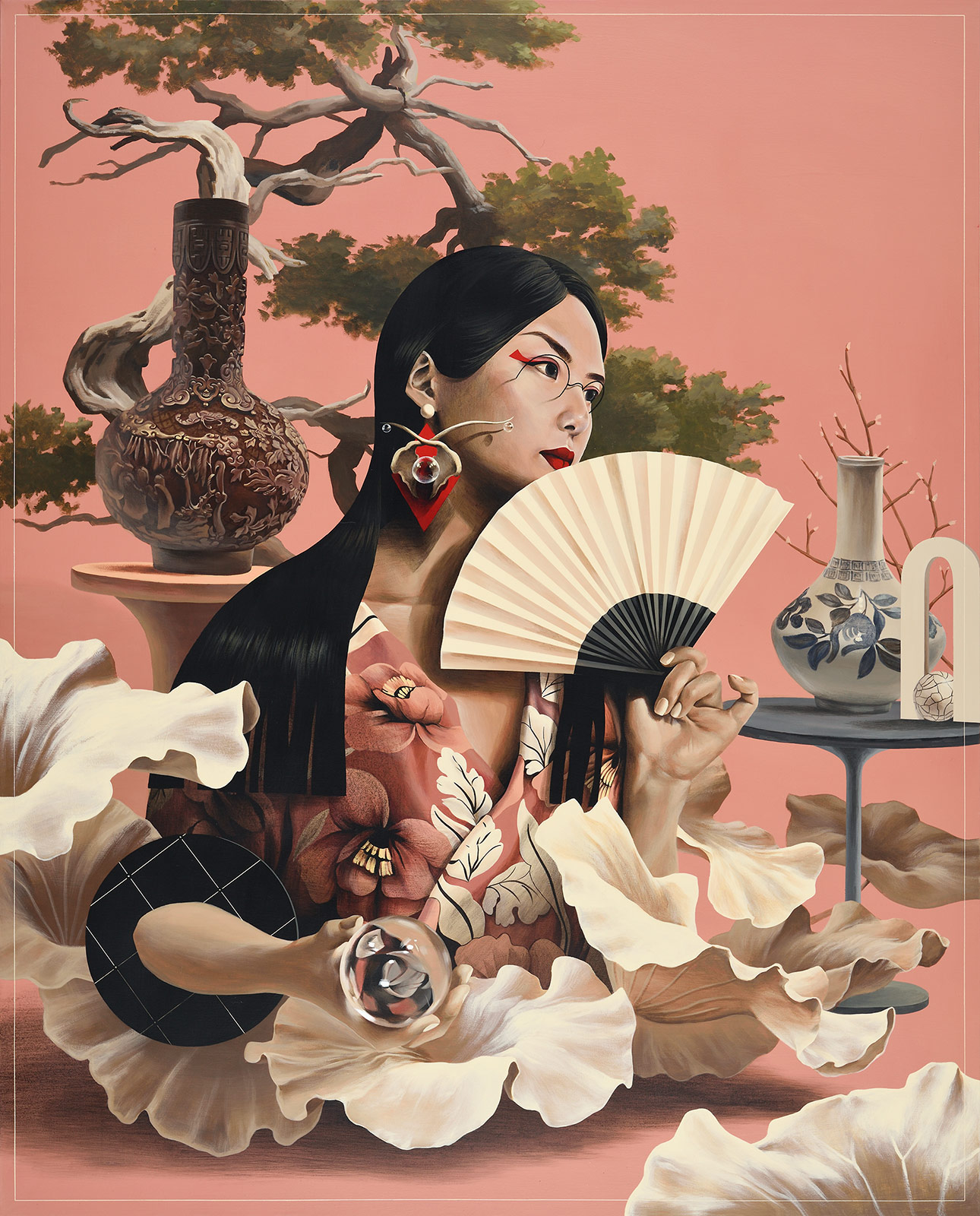