Freedom is the only option 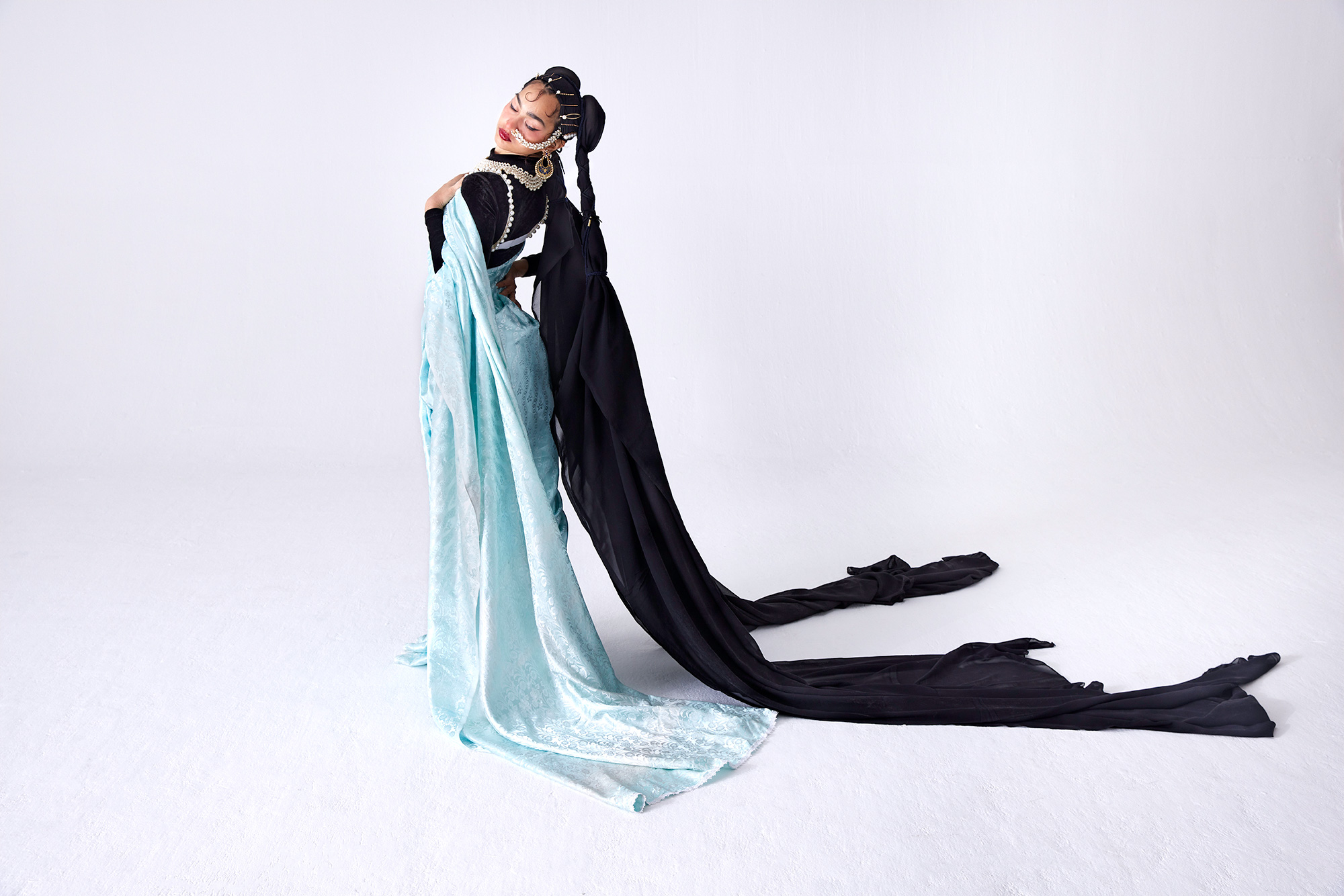 SuKha, refuses to be put in a box. Saudi Arabian-born, raised in Canada and of Bangladeshi descent, she has to deal with people telling her how to live practically her whole life. She is Muslim and loves to style scarves, but will quickly remind people that these two parts of her identity do not mean that she is hijabi. People tend to assume that her life is easy due to the carefree, self-loving attitude she presents online, but she is continuously targeted and isolated for being who she is, and courageously power through this mistreatment. Whether she’s dressed hyper-feminine or gothic, styling saris or sweatshirts, SuKha is committed to remaining true to her personality and breaking free from social barriers that tell her to behave inauthentically. We spoke to her about her unapologetic form of self-expression, as well as her fashion and music, and even her love of traveling.
For readers who may not be familiar with your work, can you tell us a bit about yourself?
I'm SuKha Never Dies, and I'm a little bit of a fashion icon and a designer and a rapper/singer – essentially a being striving for art in every way that they can.
Your fashion sense appears to combine Bengali staples, such as saris and scarves, with more streetwear pieces, and even some goth imagery. How would you describe your style, and who are your biggest inspirations?
My style was developed through the adaptation of what ‘things’ I had access to growing up within the boundaries of my poor immigrant background; I grew up in Saudi Arabia, watching a lot of Arabic pop culture, Bollywood films, and anime. After immigrating to Canada, I was further immersed into anime culture, role-playing games (where you can dress up your avatar and fight monsters), and the heavy metal/gothic music scene. After recognising these inspirations, it actually makes a lot of sense how my style comes together with big boots, big scarf styles, South Asian jewellery, and, sometimes, chains, leather and latex. 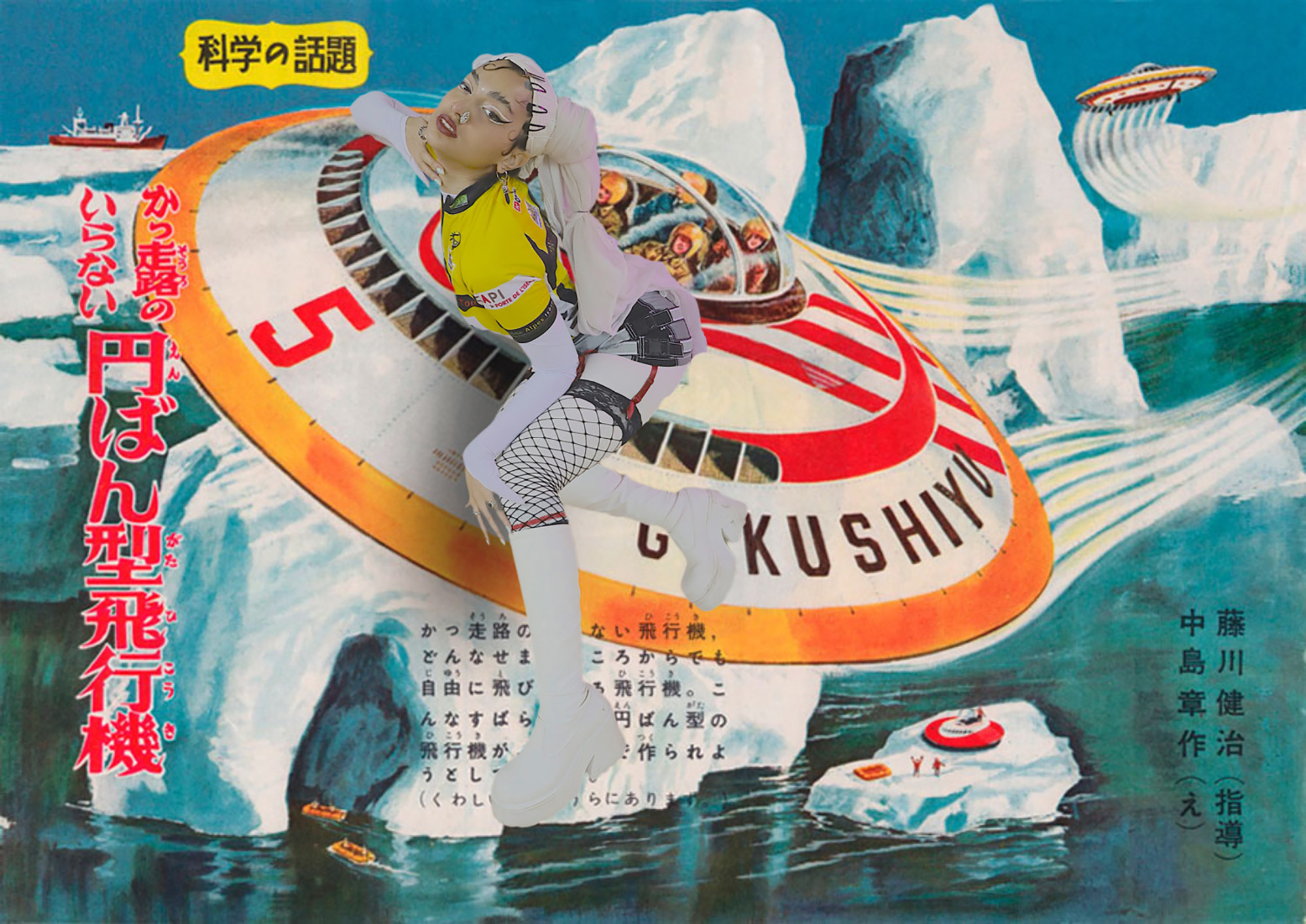 You are known for creatively styling scarves. Scarves for women of colour have been heavily politicised – to name some examples, you have spoken about how people see your scarves and assume you are hijabi and thus criticise your sense of style, while Black women are made to feel unprofessional or ashamed for wearing protective scarves in public. How might we depoliticise scarves?
Firstly, it is important to recognise that ‘othering’ is an important political strategy to make it easier to justify wars and unjust distribution of wealth and access to basic necessities. During the war on terror and the unfortunate series of events following Septermber 11, 2001, in order to put a face on the villain, the headscarf and any form of wrapped headwear became a symbol for identifying these ‘villians’ or ‘others.’ Therefore, a headscarf on a woman's head became politicised and associated with Islam and terrorism, even though white American women have worn headscarves through out history, with notable examples including Audrey Hepburn and Jackie Kennedy in the ‘60s.
As far as the politics of Black women in America goes, it's beyond the scope of a few sentences to explain the complexity of how Black women have been oppressed under racism laws, from once being forced to wear headscarves to now being questioned for why they wear it.
That being said, there is also an issue of sexism between the cultures that follow Islam where, like American culture, they find it their duty to control how women chose to dress.
As a Muslim woman, I get to choose what I want to wear and when I want to wear it.
Unfortunately, there's no other way to exist, except constantly under the scrutiny of those who impose their judgment on me, and me having to ignore them and follow my own path.
You style a lot of saris in various silhouettes, colours and aesthetics. Do you believe that the sari as a garment affords more creativity and space for individual expression?
I have a personal attachment to the sari as I've grown up watching all the beautiful women in my life wear them with so much grace and confidence. To me, a sari is symbolically a form of hyper-femininity. And I have the privilege of having the knowledge on how to drape them in so many forms.
I scrolled through the Instagram page of your store, and the models wearing your work show more skin, whereas you choose to layer more risqué pieces. What is your thought process when styling for yourself as opposed to styling for clients?
I'm not a very good stylist! So I actually have never actually fully styled anyone (meaning from hair, to makeup, to other aspects). Most of my attempted styling is just to show the pieces off rather than showing off my sense of style on others. In the future, I would like to look into learning how to style others, for sure. 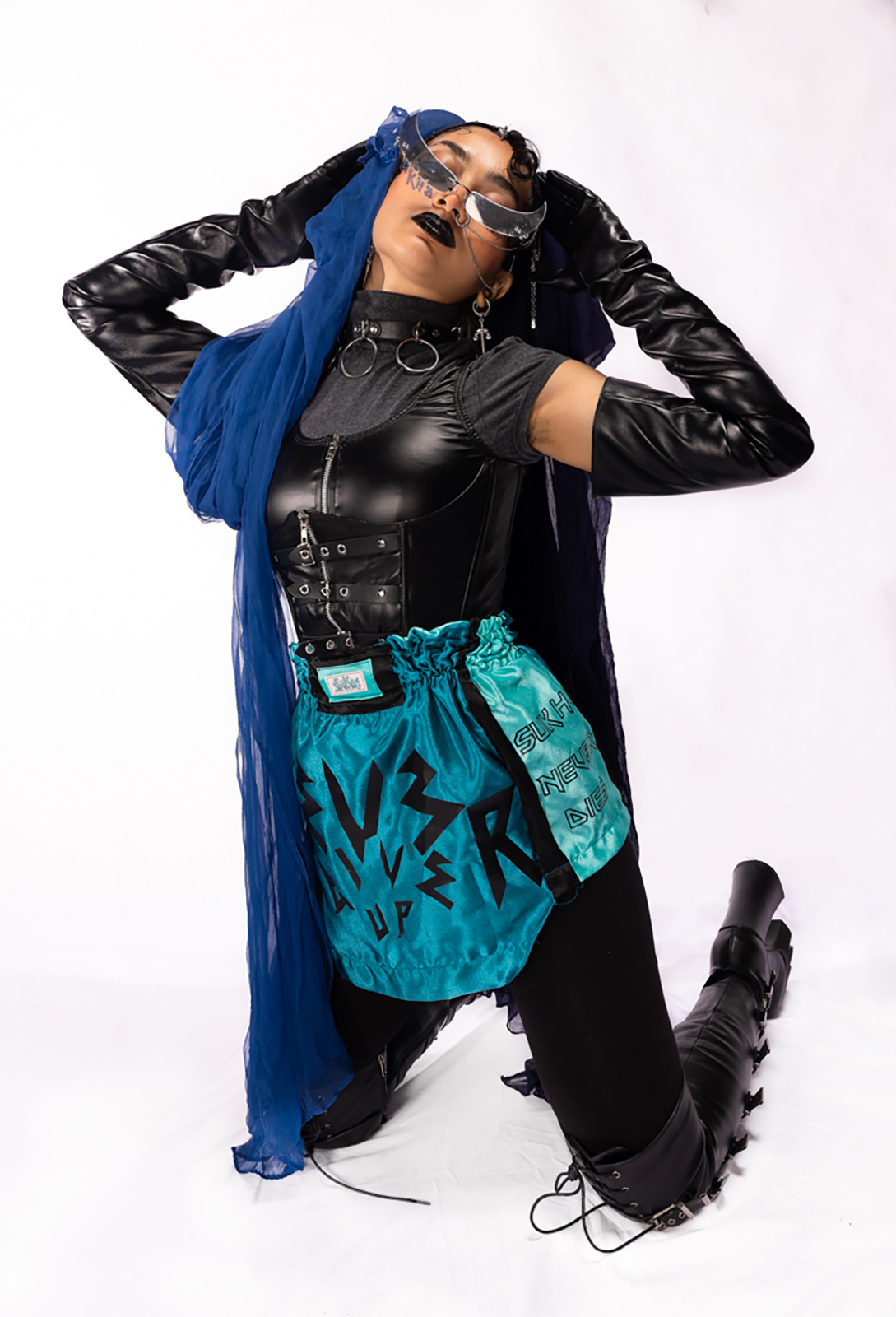 Photo: Madison Chow
You posted on Instagram that you have not sewn anything since the end of 2021. What do you think causes your creative slumps, and how do you overcome those moments? Why did you close your store? Is it related to the creative slump? Is there a chance it will reopen soon?
I have since started to sew again and have been thinking of newer ideas. A creative slump is inevitable when you're not consistently making a living and have to focus your attention on finding ways to survive while still maintaining your desire to pursue your dreams. My advice to myself whenever I'm in a creative slump is simply to disengage from all social media and social events, and to focus on living in the moment and solving the problems ahead of me one step at a time. What is meant for me will come to me, because I am my art as much as the art is what I create.
You were once a frequent traveler, and did so on not much money and you have expressed a desire to return to this transient lifestyle. Can you share one of your most memorable moments from your travels? What was it like traveling alone as a woman?
I do love to travel alone, and the last place I visited was Istanbul, 2 months ago. My memorable moments are always tied to how I somehow attract amazing artists as friends whenever I set foot to a new destination. For example, when I visited the cities New York, London, Paris, and Capetown – I had the similar experience of finding creative friends in a very short period of time and creating music videos and photoshoots. I honestly live by the blind faith that good friends and art will find me. Currently, I'm trying to put that blind faith into love and success.
You mentioned that, while traveling, you did not prioritise your health and safety the way that you do now. What steps are you taking to ensure your wellbeing?
I never had any guidance as a ‘solo woman’ because I come from a very family oriented culture, where I don't know a single woman in my family who has ever traveled alone. For this reason, I was left to the wild with nothing but my naive faith that everything will be alright. Now that I am older, and I have met many people and had many terrible and positive experiences... I think I did the best I could at the time, with the money, passion and time I had. Those experiences helped me level up in confidence. Now, I will focus more on gaining financial independence, as that opens up the door for safer locations for housing/hotels, better food options, safer travel options, and, of course, more money to spread to artists. 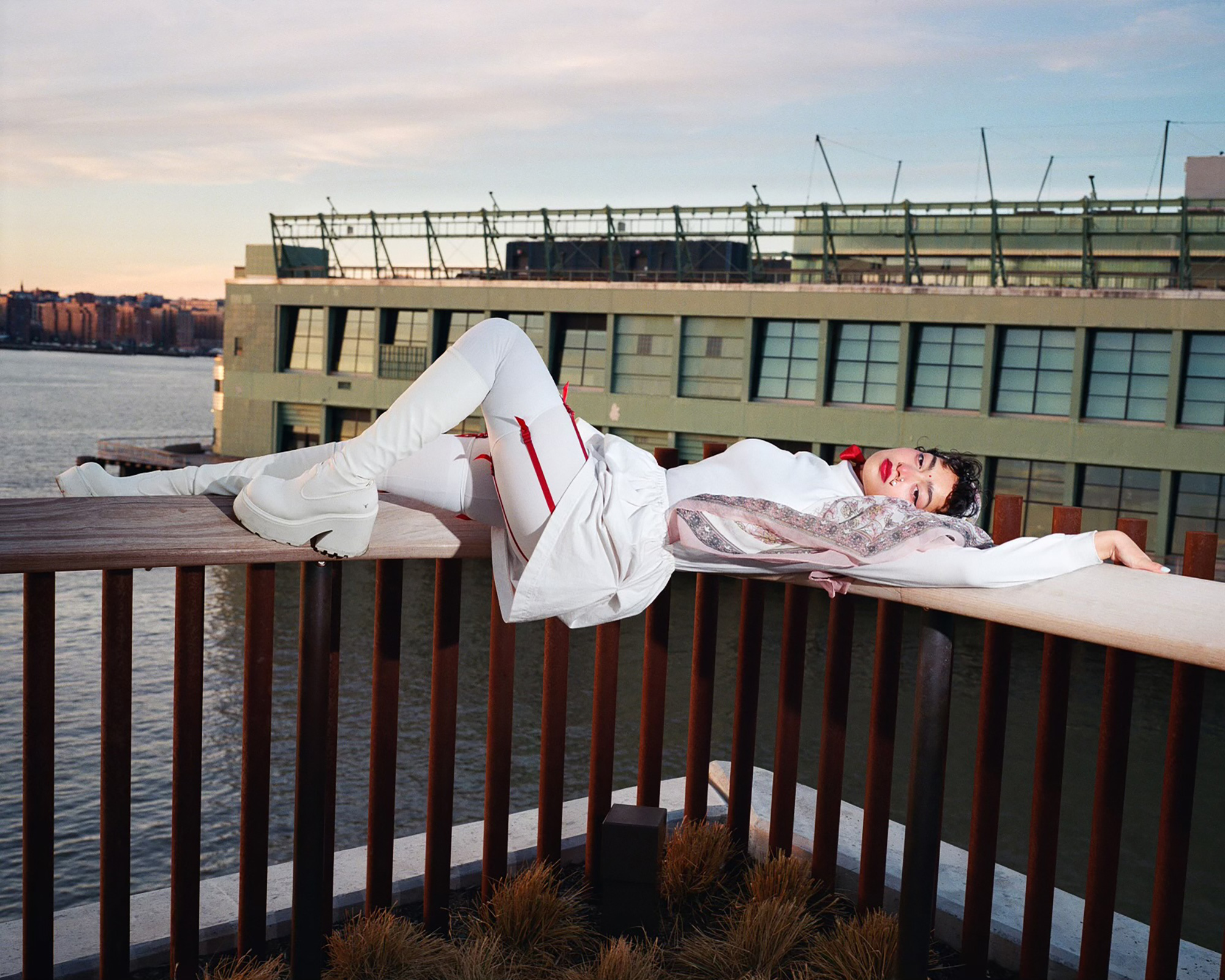 Photo: Culture Industry
You have encouraged your followers to practice self-empowerment, personal freedom, and financial independence. What advice would you give to people who want to practice these habits, but are constrained for whatever reason – for example, they’re minors, they work low wage jobs, or the people around them potentially pose a threat?
I think a good metaphor to explain how I broke my shackles is about how, if you tie a baby elephant to a pole, their strength will not be enough to break free to freedom. As the elephant grows into a fine, strong adult, they still stay tied to that same pole, believing that they're not strong enough to break free to freedom. It will take many, many, many terrifying realisations and steps, and I kid you not, the willingness to be subjected to being ‘kicked out’ or essentially ‘losing something,’ to become who you are. I've done it more than once, and it has not been easy, but I know no other way of being alive.
Many people on the internet think I'm lucky or I have it easy, while being pessimistic about their own ability to break free to do what they love. But I can see the baby elephant tied to the pole in their actions/words... It's almost as they let their fear of the unknown conquer the possibility of them finding their own path. That being said, I'm always evolving and re-evaluating what I want to be and what I want to do in the future. There's always room for change or growth.
You shared in an interview with Infringe, that you were happy to find a community of people who express themselves on social media. What are the drawbacks of existing on social media? How do you deal with them?
Like I said earlier, people judge my life to be easy, and unfortunately, many insecure or self-righteous folks find it compelling to leave hateful messages. I deal with them by ignoring them, but sometimes I like to leave immature replies for fun.
How would you describe your music in terms of genre, if you feel it has one?
My album was released in 2020, The Ugly Browngirl Mixtape 2020, Back of My Mind where I compiled music made in various cities around the world starting from the end of 2018, until the end of 2019. I am ultimately alternative in my style of music because the album begins in soft melodic tones and ends off in a heavier trap genre.

What parallels do you draw between your music and your fashion?
My music and fashion go very much hand in hand; this will be especially visible upon the release of my music videos. My fashion and my music is fun and always edging the politics of existing as who I am. 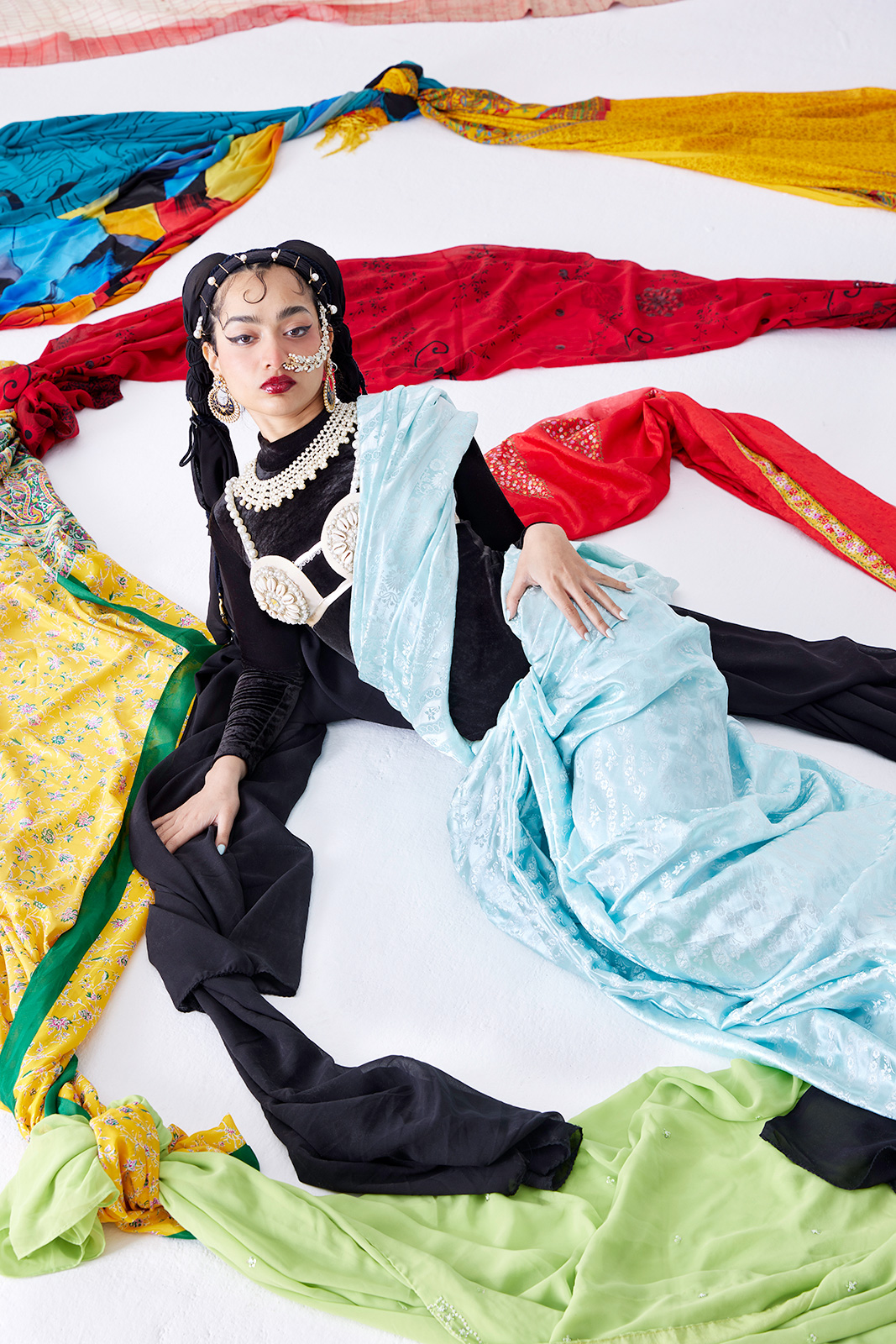 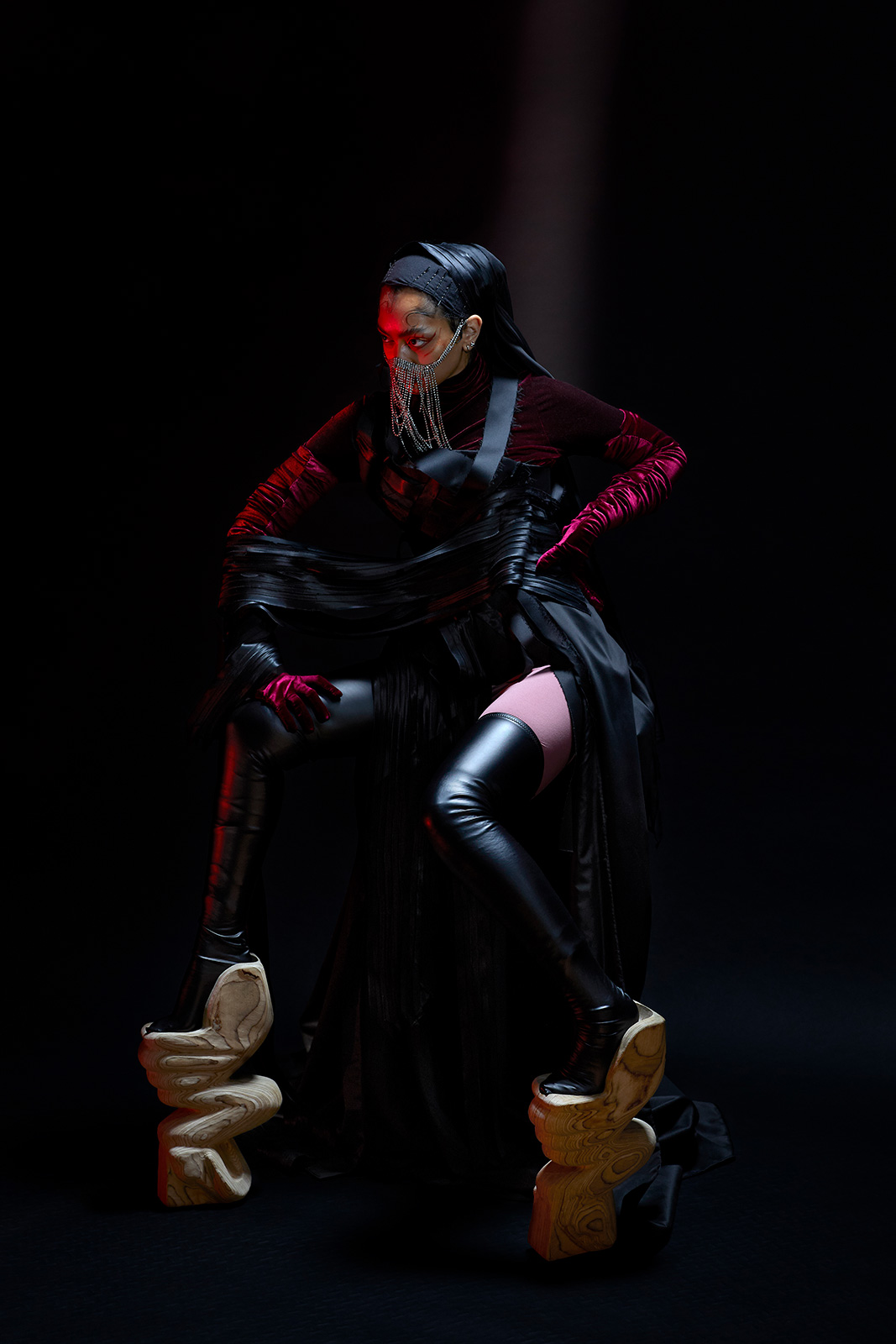