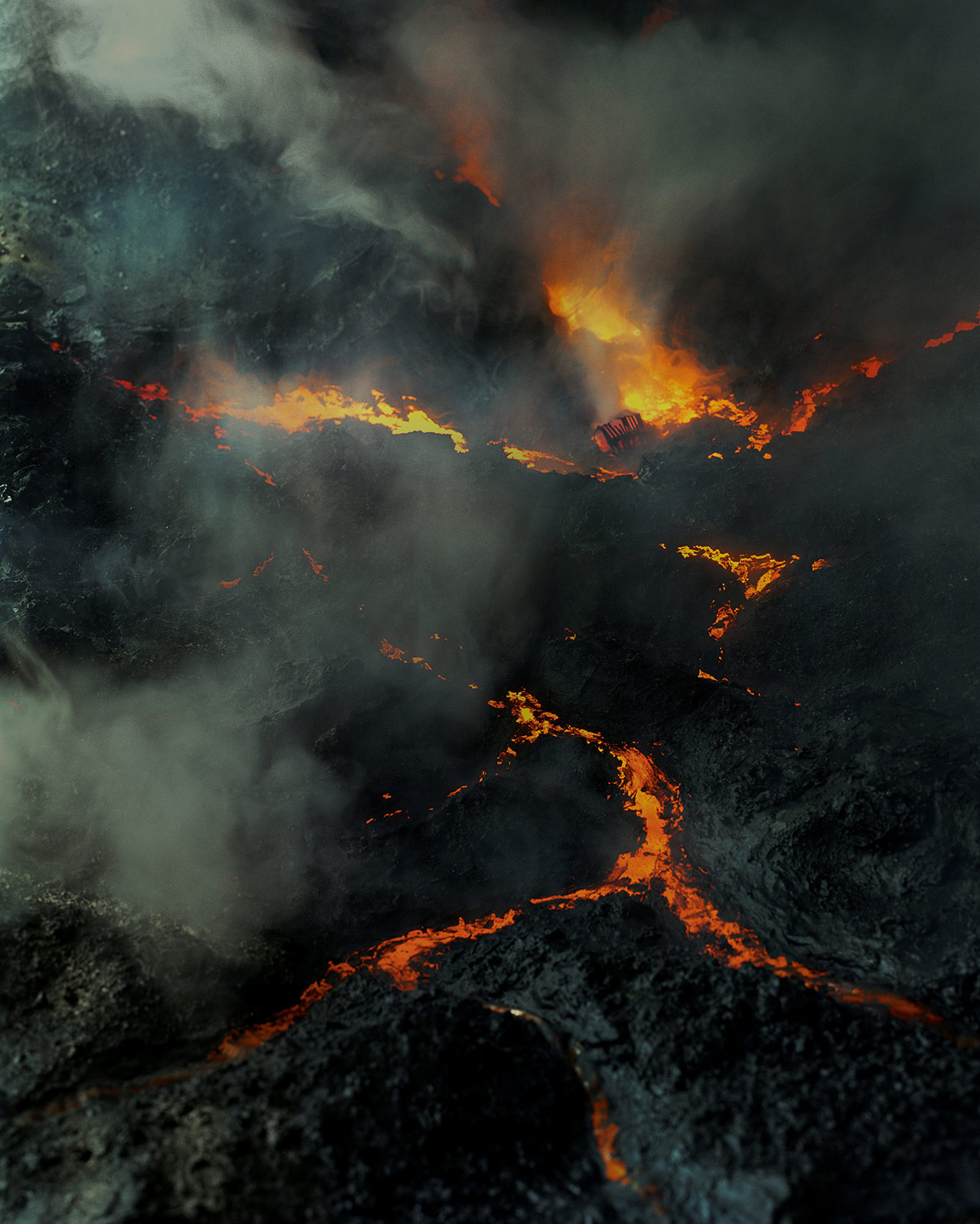 Oil spills, tornados or wildfires star in Sonja Braas’ photography. But she doesn’t chase tragedy or natural disasters; instead, she builds her own sets (which can take up to six months) and takes pictures of scenarios that fuel fear, of possible threats, of society’s nightmares. Enigma, suggestion, and insinuation all play an important role in her work. In a time when the world seems doomed, she confesses that “it is unfortunately not happiness in my view that is shaping our world but fear and greed.”
You mentioned that you prefer photography as your medium because it expresses what is actually present. Although you also toy with the perception of reality in them. When did you start using photography as artistic groundwork?
Photography interests me for my work because it implies the representation of reality, not actually presents it. This implication leads to a very immediate, if short-lived belief in the truth of the image. Photography’s ubiquity and familiarity through use and consumption create an initial trust in images despite common awareness of image manipulation.
The suspension of disbelieve – unique to photography, video and film – allows me to express the ideas I am interested in, which all relate to perception and the role images play in forming our ideas about the world surrounding us. I have always used photography for the final result, even though painting and sculpture play a role in the production of the sets I build and then photograph.
In a past video, you stated that photography helps with the perception of your thoughts, especially through romantic landscapes and catastrophes. Do you only produce pieces when you follow a certain train of thought?
My work always starts with an observation that lasts past a fleeting moment, stays with me and turns into an idea for a series. I then research it looking for philosophical, scientific or fictional texts, as well as other works (independently from their medium) that might have dealt with this idea. After the idea has become more defined, I begin sketching the images I want in the series like a storyboard, and then start to build them – or, in some cases, try to find them on location. The use of landscapes is specific to the series and allows me to visualize and translate an idea, it is however not about the landscape itself. 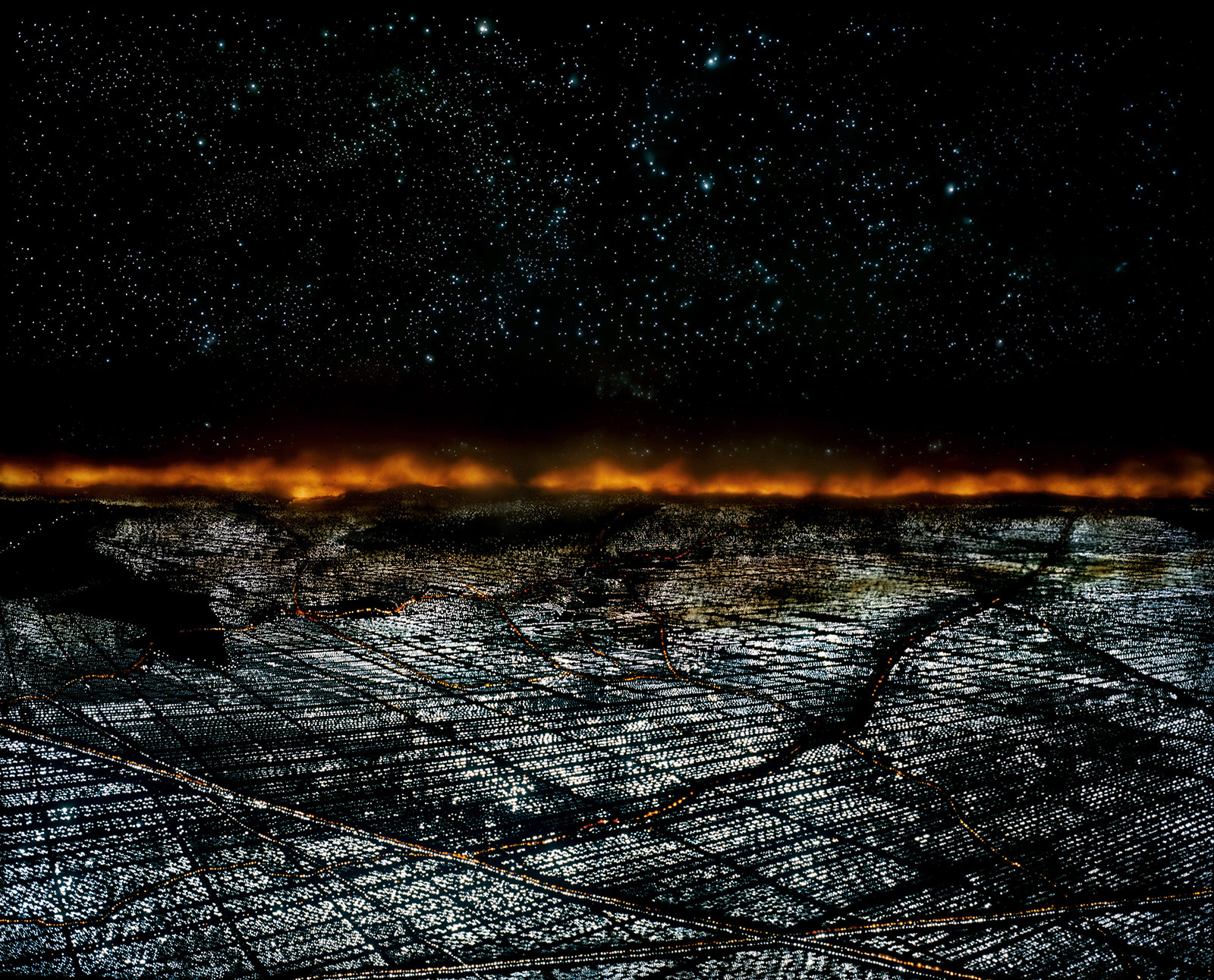 The Quiet Of Dissolution, Firestorm.
Do you mind inviting us to the train and provide some details?
I created the series The Quiet of Dissolution, for example, because I was fascinated by the media’s depiction of disasters, both visually and verbally, and what it means for our understanding of ourselves and what surrounds us. Also, to explore where the borders are – where does ‘we’ end and where does ‘the other’ begin –, the equating of culture and order as well as of nature and chaos.
In the religious undertones and the anthropomorphization of nature, with the presentation of endless repetitions of amateur footage feeding into the ridiculous perception of nature as a raging, avenging being that strikes back as an opponent who needs to be restrained. The fascination for that which appears threatening and outside of our control despite the intensifying human influences on nature and consequently of natural catastrophes. Once the immediate danger has passed, it is followed by a comparably irrational repression, an almost complete ignorance of the presence of nature and possible risks.
It is this ambivalence and the important role that images play in its creation that interested me. All images of The Quiet of Dissolution are based on sets I built to create iconographic depictions of disasters, frozen images of the unforeseen, sudden and overwhelming; large-sized photographs that pretend authenticity and question it through the control and order of the chaos in the image, that reconstruct mystification only to break it down, once doubt in the image sets in.
Some photographers like to feel a sense of homey familiarity in their photos. Do any of the landscapes you use involve elements that remind you of your natal country? If not, do you try to deviate from it or is it pure coincidence?
My work is never about the landscapes I photograph, so their location or suggestion of location plays no role in my work.
Emotions are a key factor that indirectly fuel our social lives; you highlight fear as a motivating power, an underlying widespread emotion. May I ask why specifically this one? Why not happiness?
It is unfortunately not happiness in my view that is shaping our world but fear and greed. For the last few years, it has become apparent to me how much fear rules our societies, how unfounded fears are created, pushed and exploited, to benefit a xenophobic, racist and nationalist ideology that is currently resurfacing around the world. There is a colonization of our lives by fear and a resulting sense of impending doom, a low-intensity fear that surrounds us, shapes our space of action and forms the backdrop for our experiences and views.
I based my recent series An Abundance of Caution on this observation. The images in the series suggest danger to various degrees; at times, the danger is implied merely within the context of the other pieces or exists solely in the viewer's perception, based on the individual experiences. The image Container, for example, is often read by American viewers as depicting potential terror – the smuggling of terrorists or of weapons of mass destruction. Most European viewers see it as an image about trade wars or don’t see it as threatening at all.
This varying interpretation based on one's own background was important to me; none of the images shows a clear and definite danger, are often just depictions of objects – for example, a pool or a switchboard – or of situations void of any specific danger, but with just enough suggestion of narrative to let the spectator create his/ her own story.

“It has become apparent to me how much fear rules our societies, how unfounded fears are created, pushed and exploited, to benefit a xenophobic, racist and nationalist ideology that is currently resurfacing around the world.”
The images are not the realistic scenarios spectators usually confront, and I like how it adds a dreamy and eerie essence to the scenes. Do you tend to plan out your collections, or do they start out as merely spontaneous snapshots and grow into a narrative along the way?
Before I actually photograph, the series already exists in my mind and in form of drawings I have made. Of course, changes do happen, during the very slow process of building the sets – it can take me up to six months to finish one piece – or while on location to photograph the images I don’t build. A set sometimes just doesn’t work out or works differently than I had originally expected, and on location, I can come across an image that would work better than the one I had envisioned. These are only gradual changes though that do not impact the original concept.
Your work combines familiarity with suspicion, a perfect balance that gives a certain detachment from the image. Do you ever feel like you speak to the spectator through the work?
Like any artist, I hope to relate to the spectator and have an effect on her/his perception through my work. To create suspicion in the image and, hopefully, in one’s own perception is a central part of my work. Photography allows me to create a very immediate emotional reaction and the large size of my images at first supports this emotional response. It then also enables the viewer to discover details of the set’s materiality and, consequently, that the image is not based on the perceived reality but on something entirely different. This back and forth between emotional attachment and intellectual detachment is very important to me and is part of the reason I build sets. 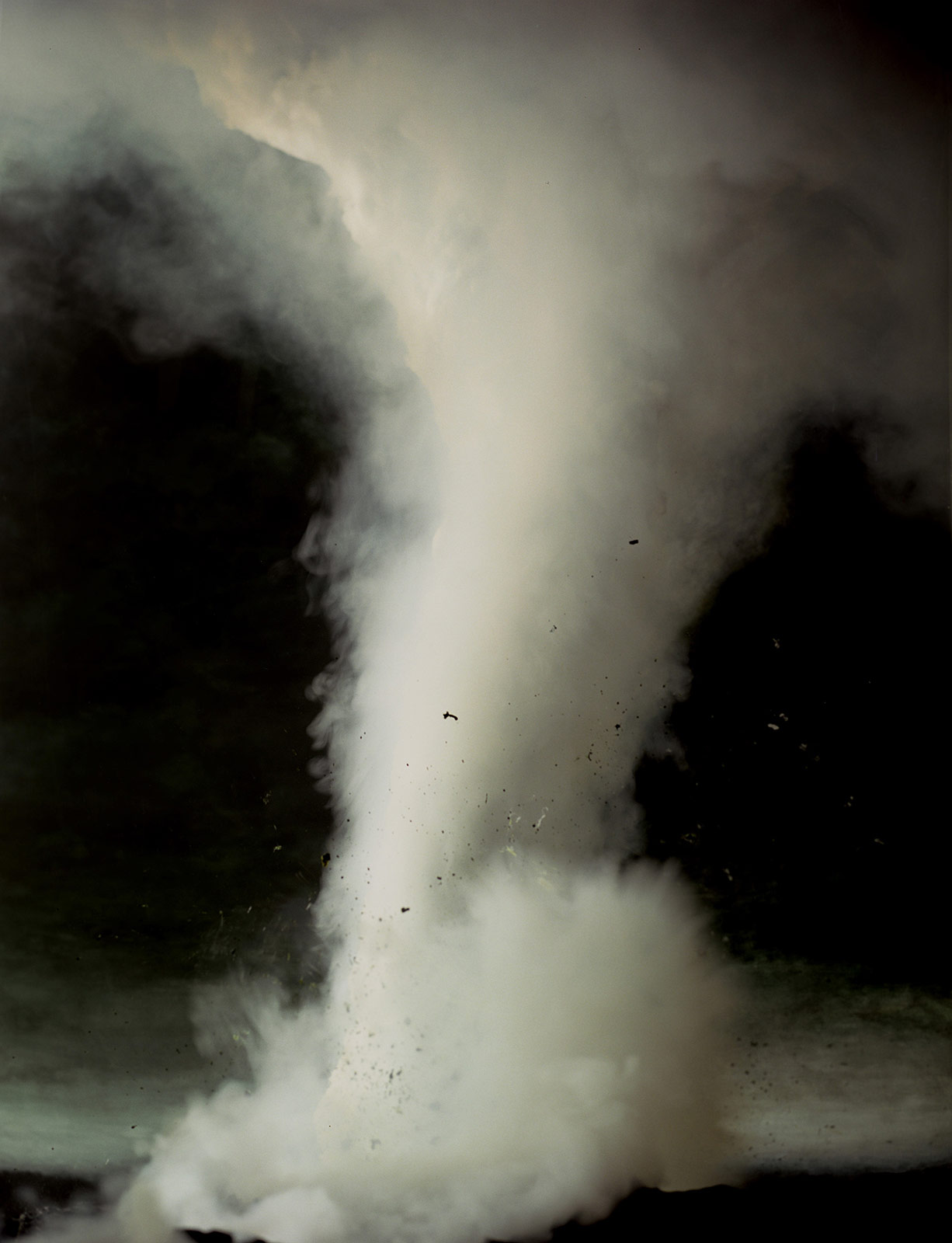 The Quiet Of Dissolution, Tornado.
You use analogue to emphasize its authentic vibe, to encourage suspense. Do you ever see yourself going digital? Why or why not?
In the context of building sets that I then photograph, the feeling of authenticity is crucial for me. I like and want the imperfections that are created by building with materials ranging from cotton to concrete and then using analogue photography to capture the result, as I want the viewer to discover that the image’s source is not the expected reality. I can however see myself working digitally in the future, it depends on the concept of the series as it determines the medium. I would also not rule out using other media with or aside from photography.
I believe your last solo exhibition was A Survey, in Galerie Tanit, but you had a previous expo alongside other artists. Are you currently working on something new or are you relaxing before you conjure up a new piece?
I have just finished the series An Abundance of Caution, and am currently working on a new series. 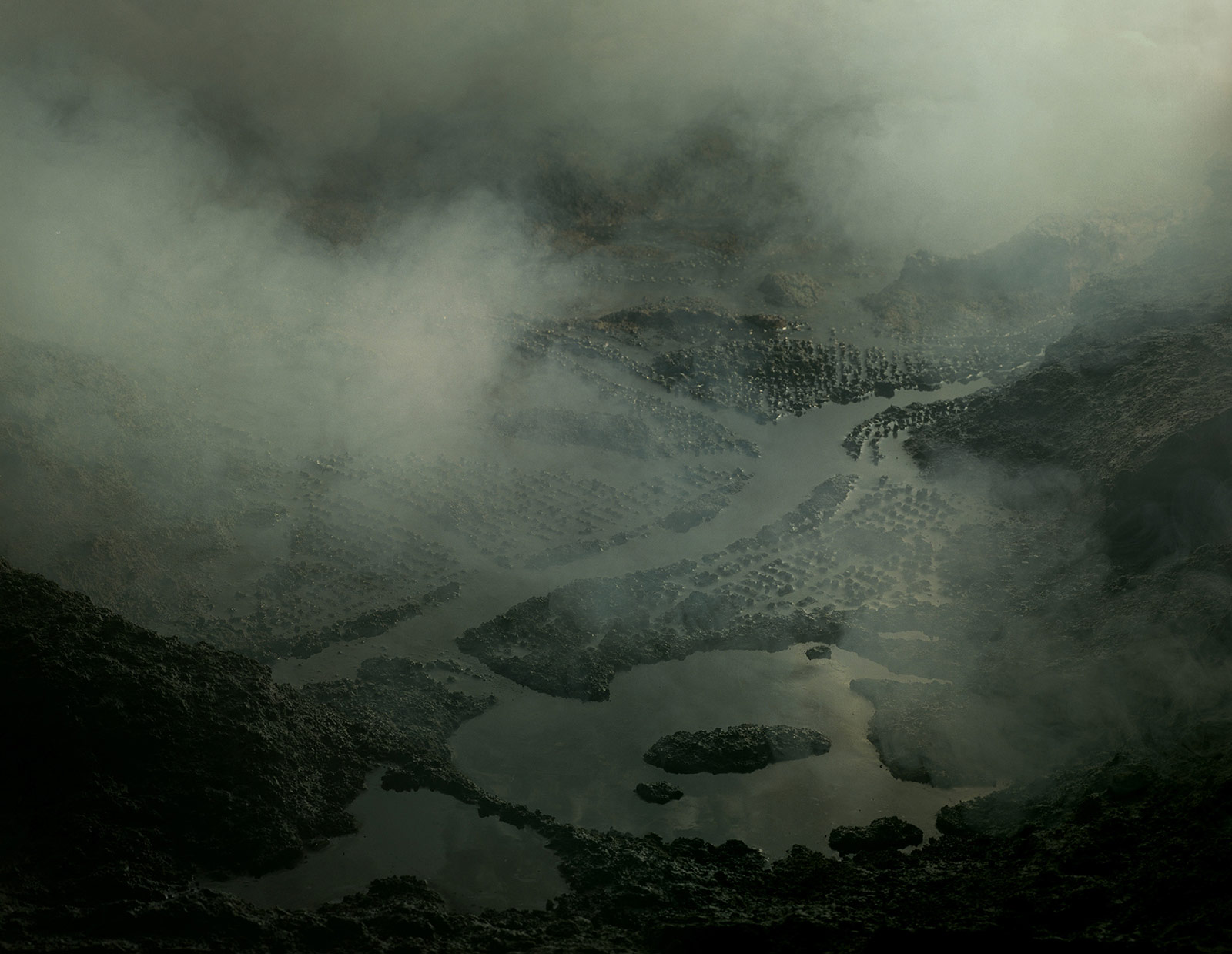 The Quiet Of Dissolution, Flood. 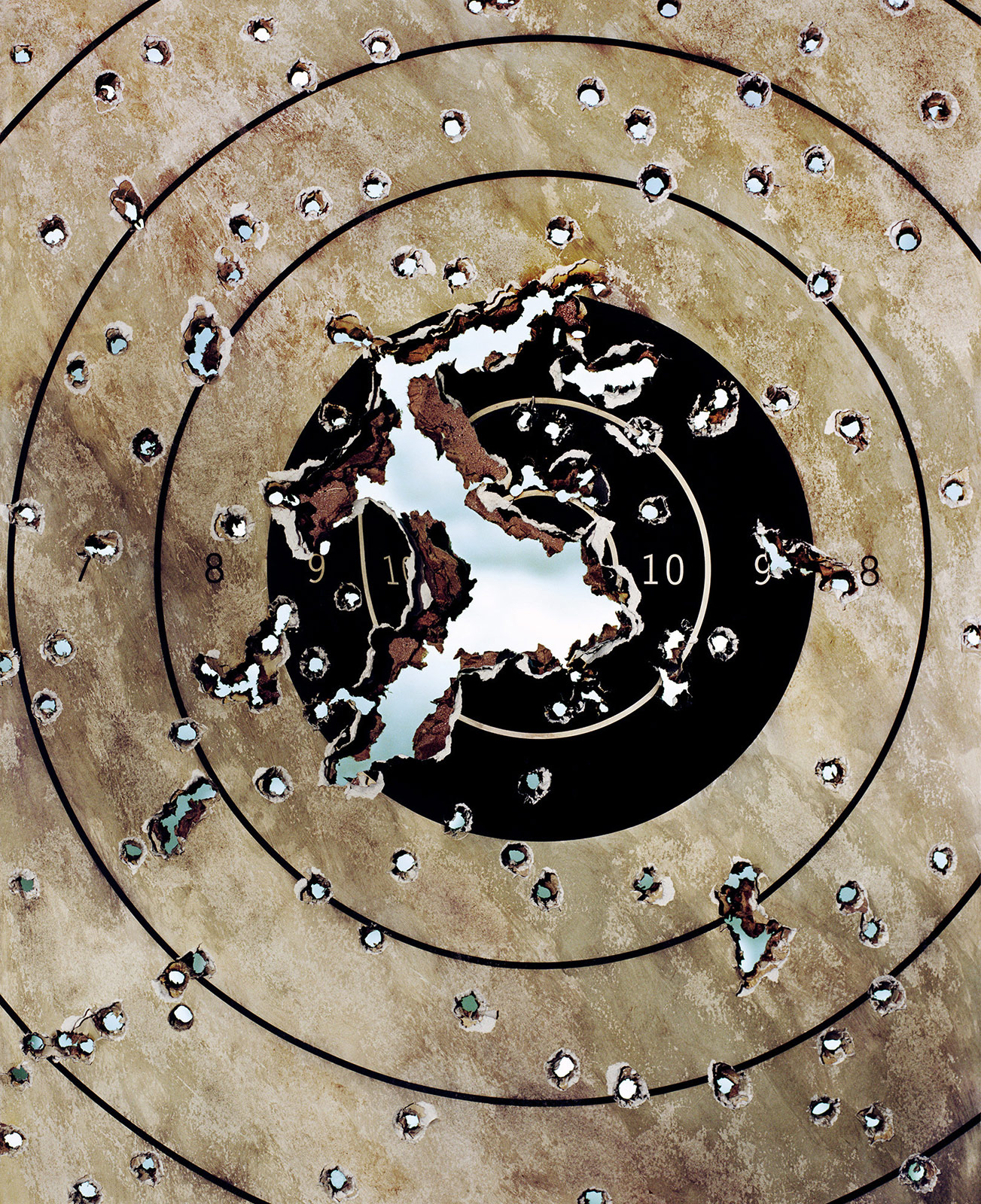 An Abundance Of Caution, Target. 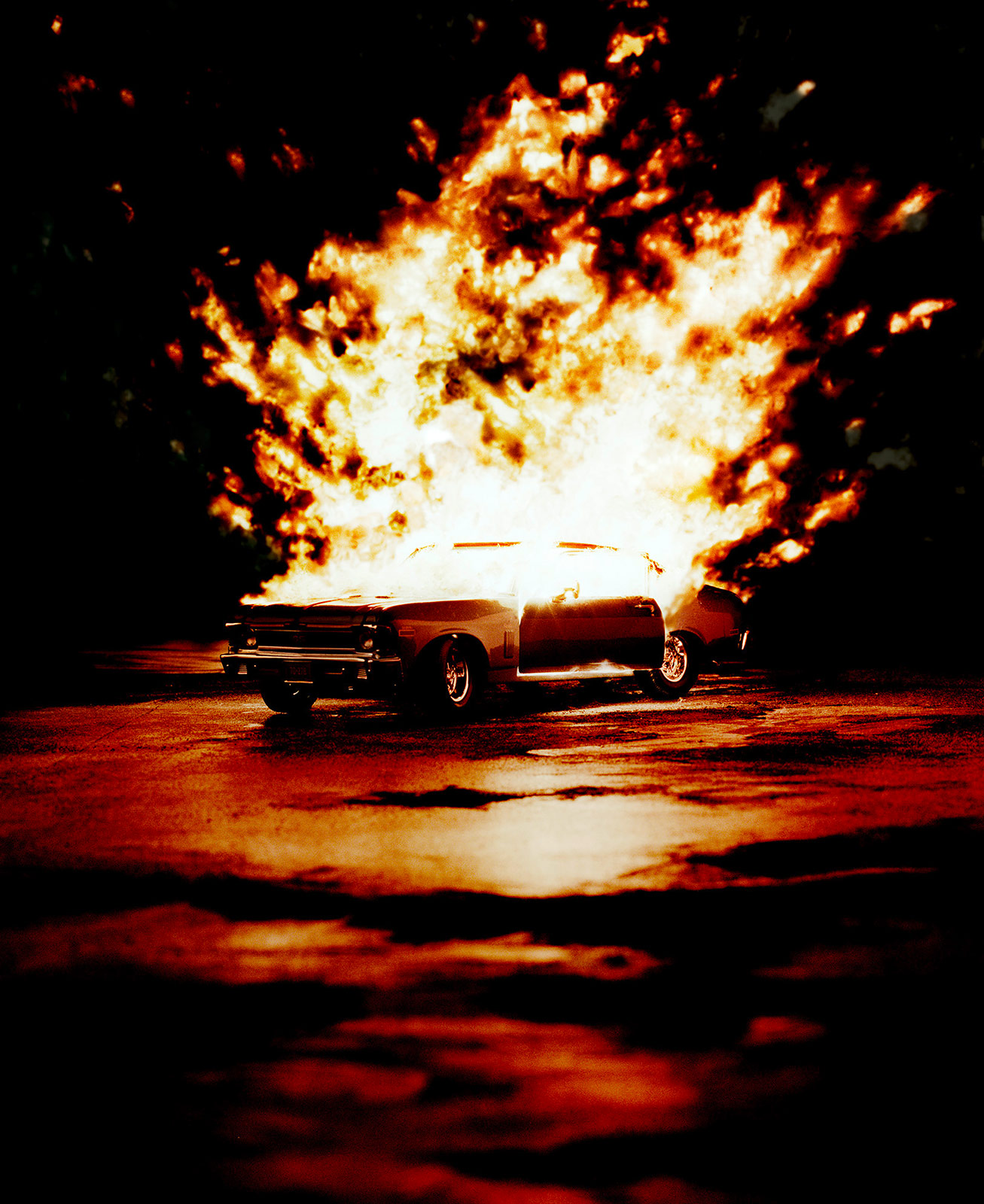 An Abundance Of Caution, Car. 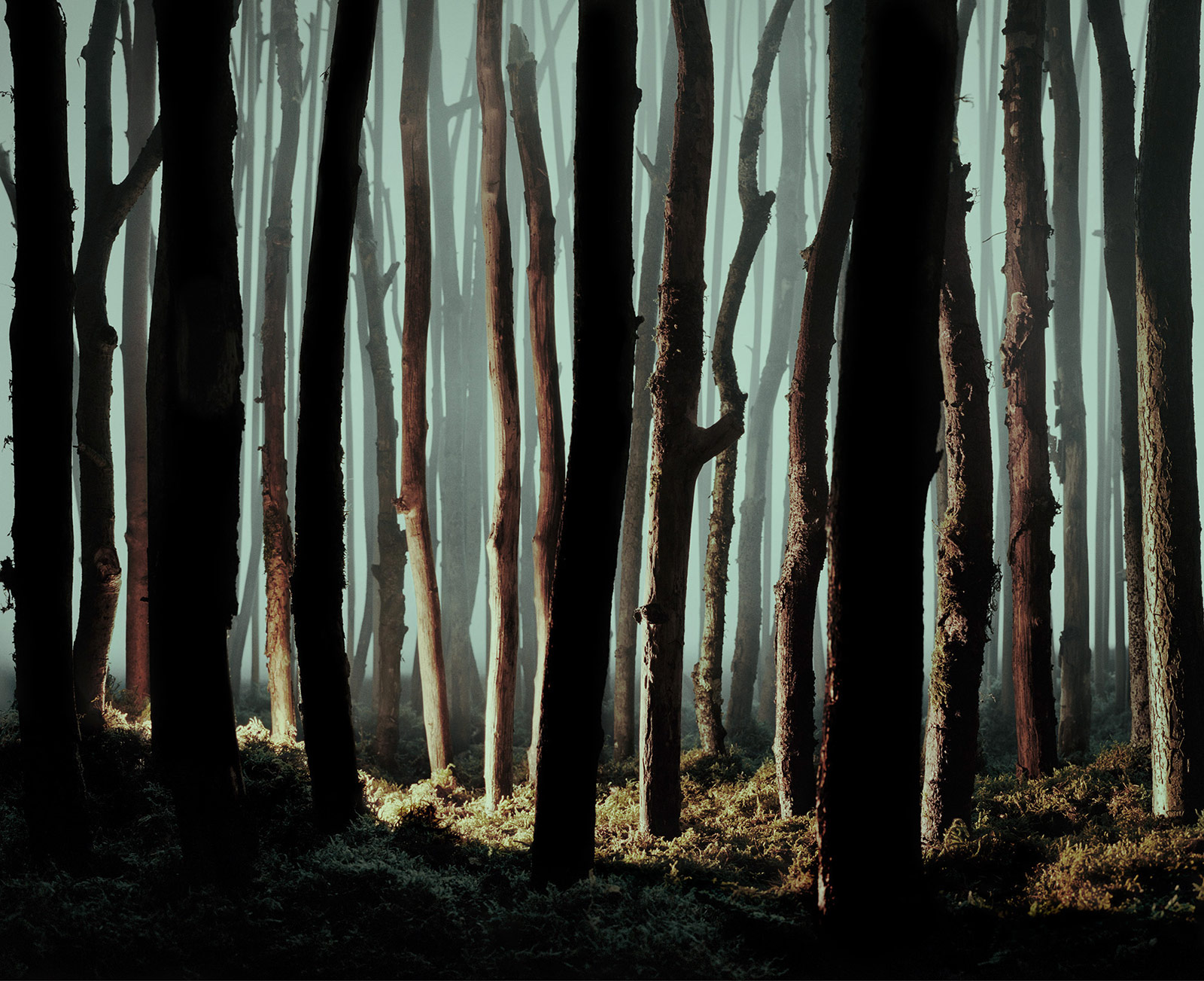 An Abundance Of Caution, Forest. 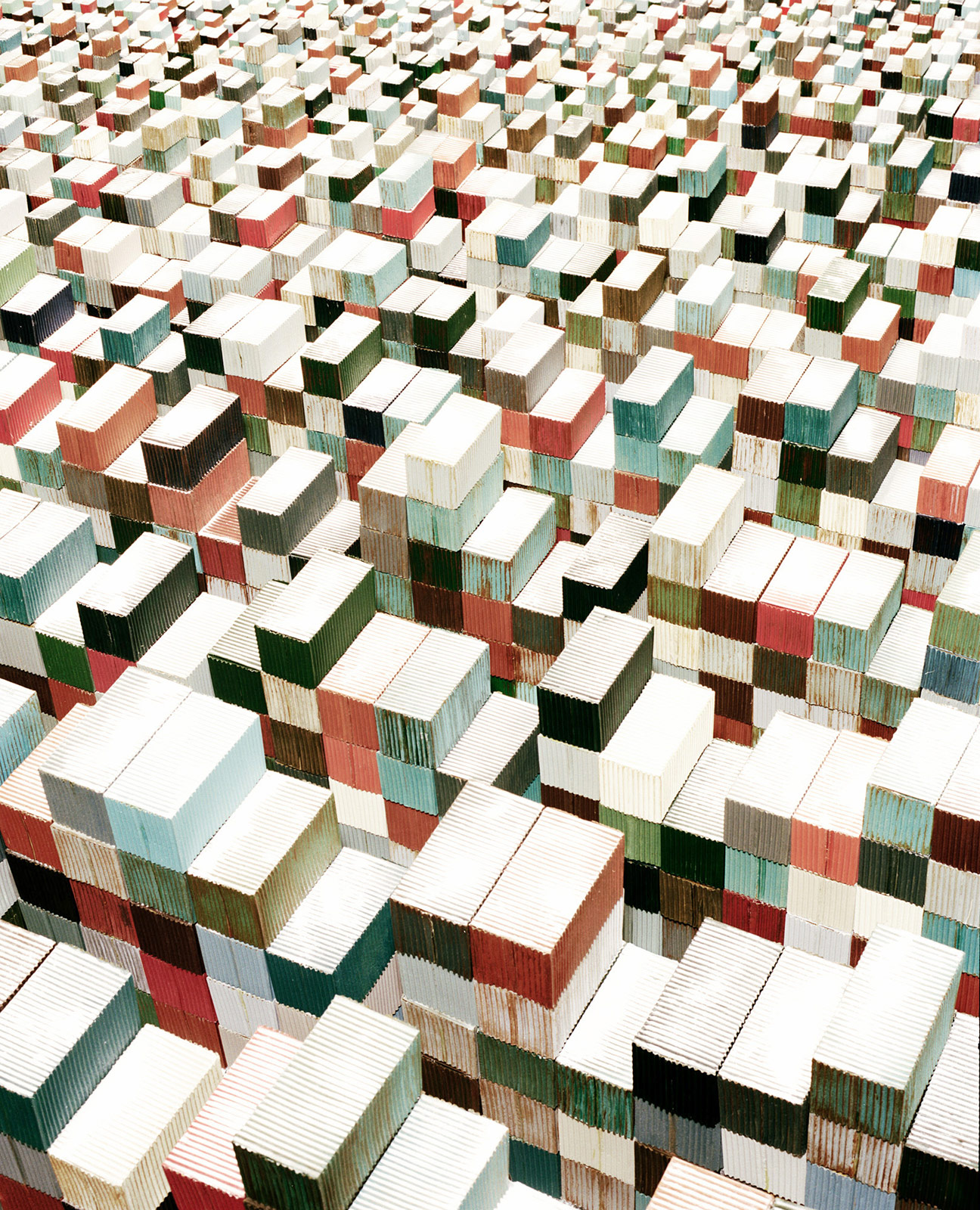 An Abundance Of Caution, Container. 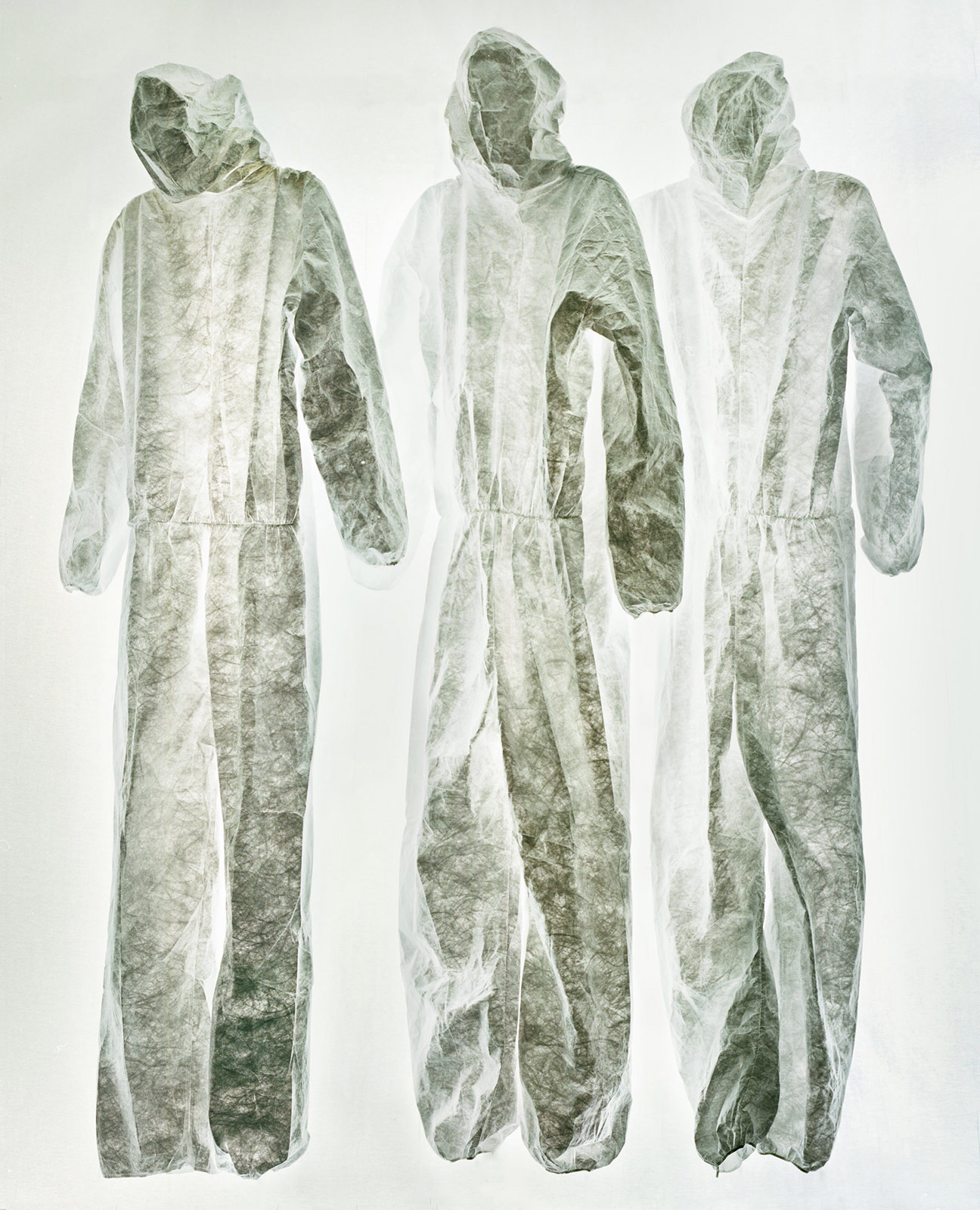 An Abundance Of Caution, Suits. 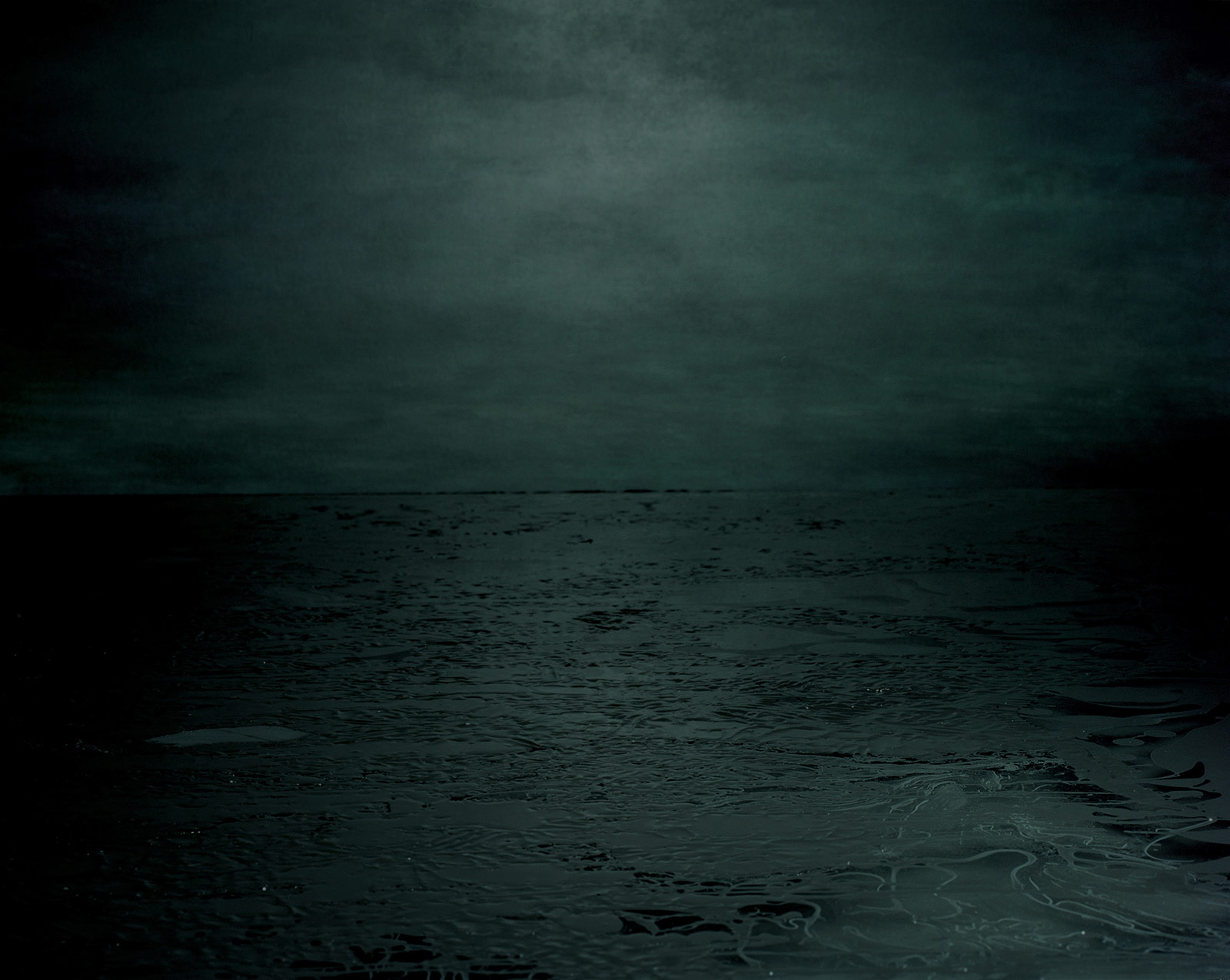 The Quiet Of Dissolution, Oil Spill. 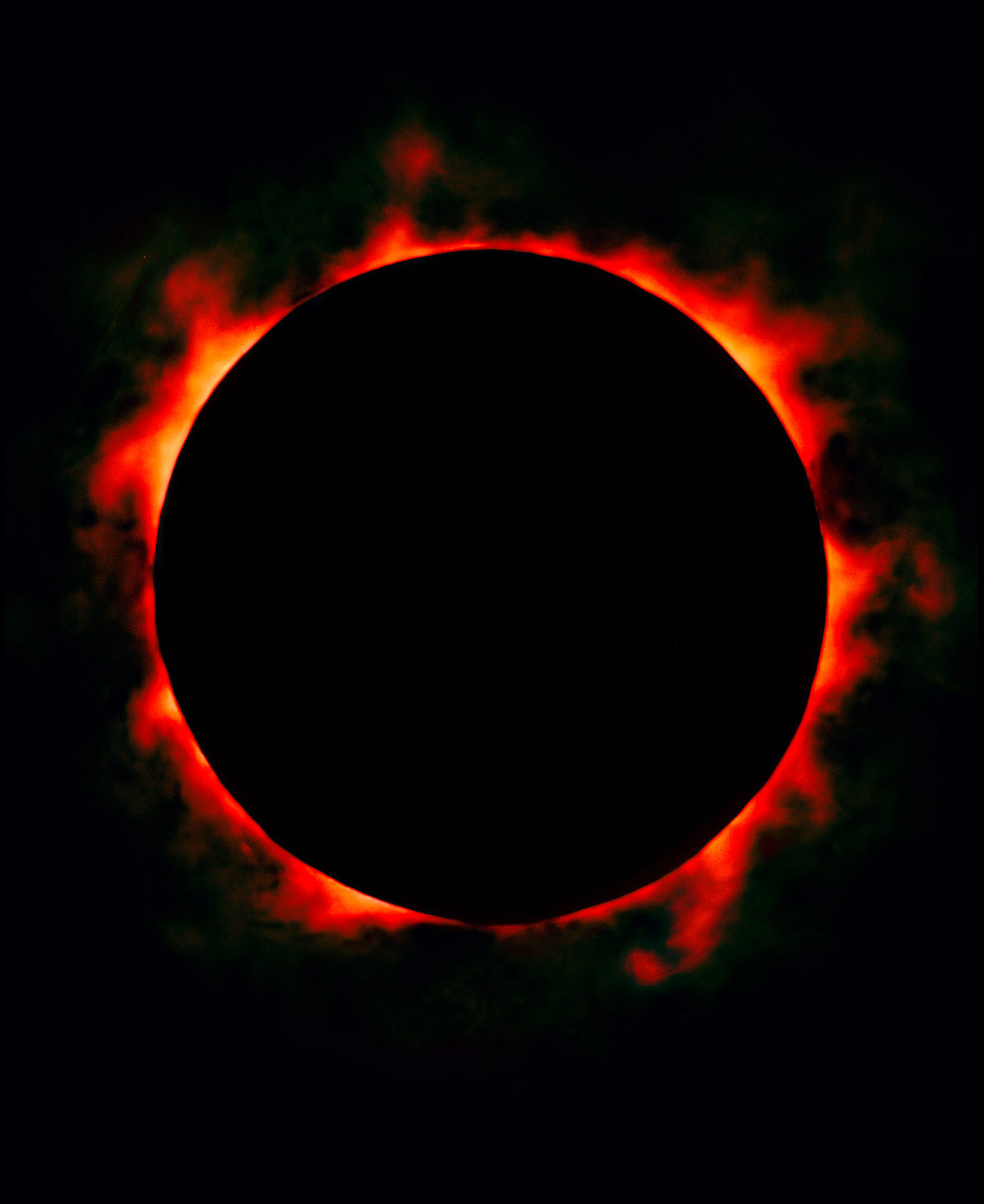 An Abundance Of Caution, Eclipse. 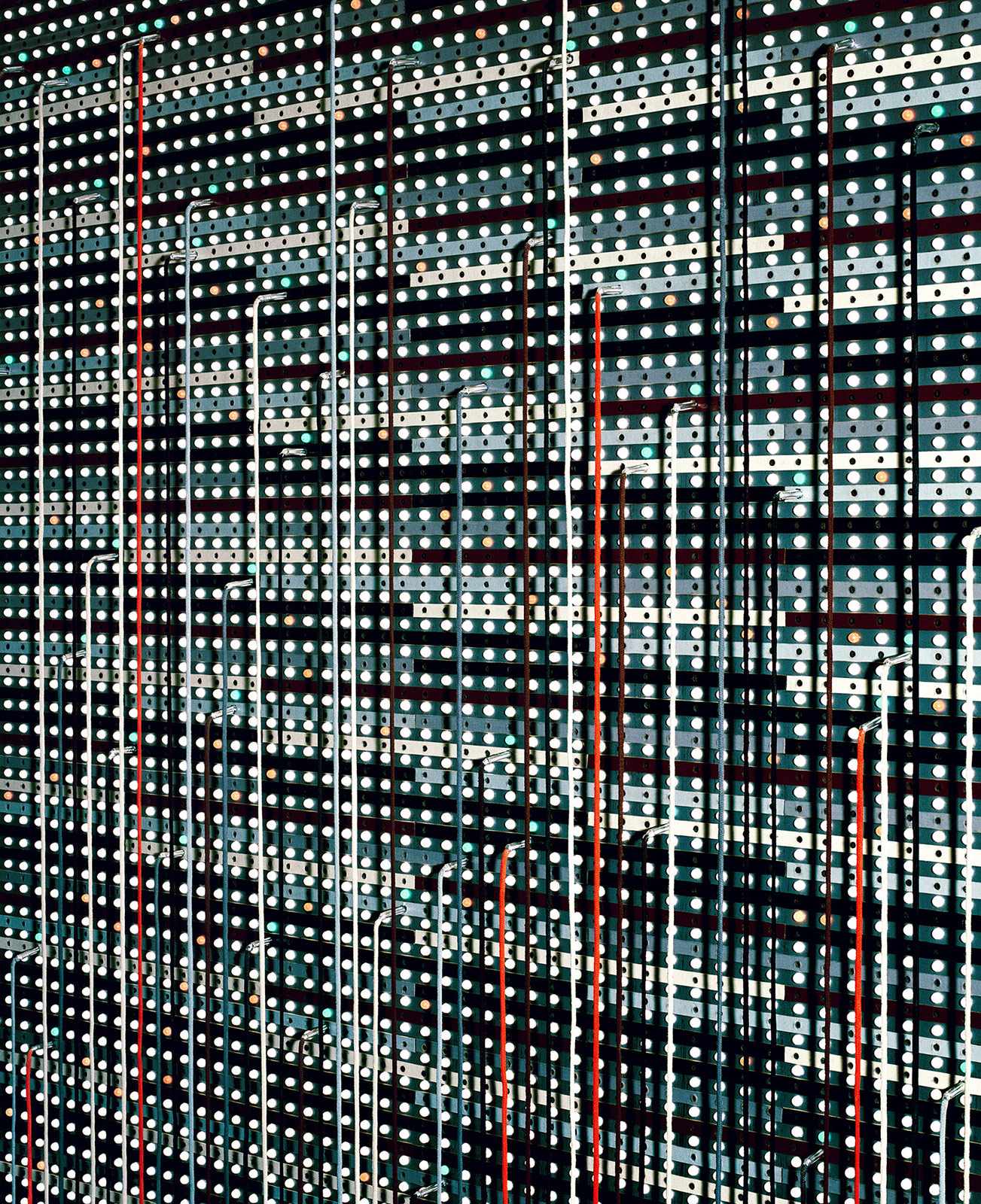 An Abundance Of Caution, Switchboard. 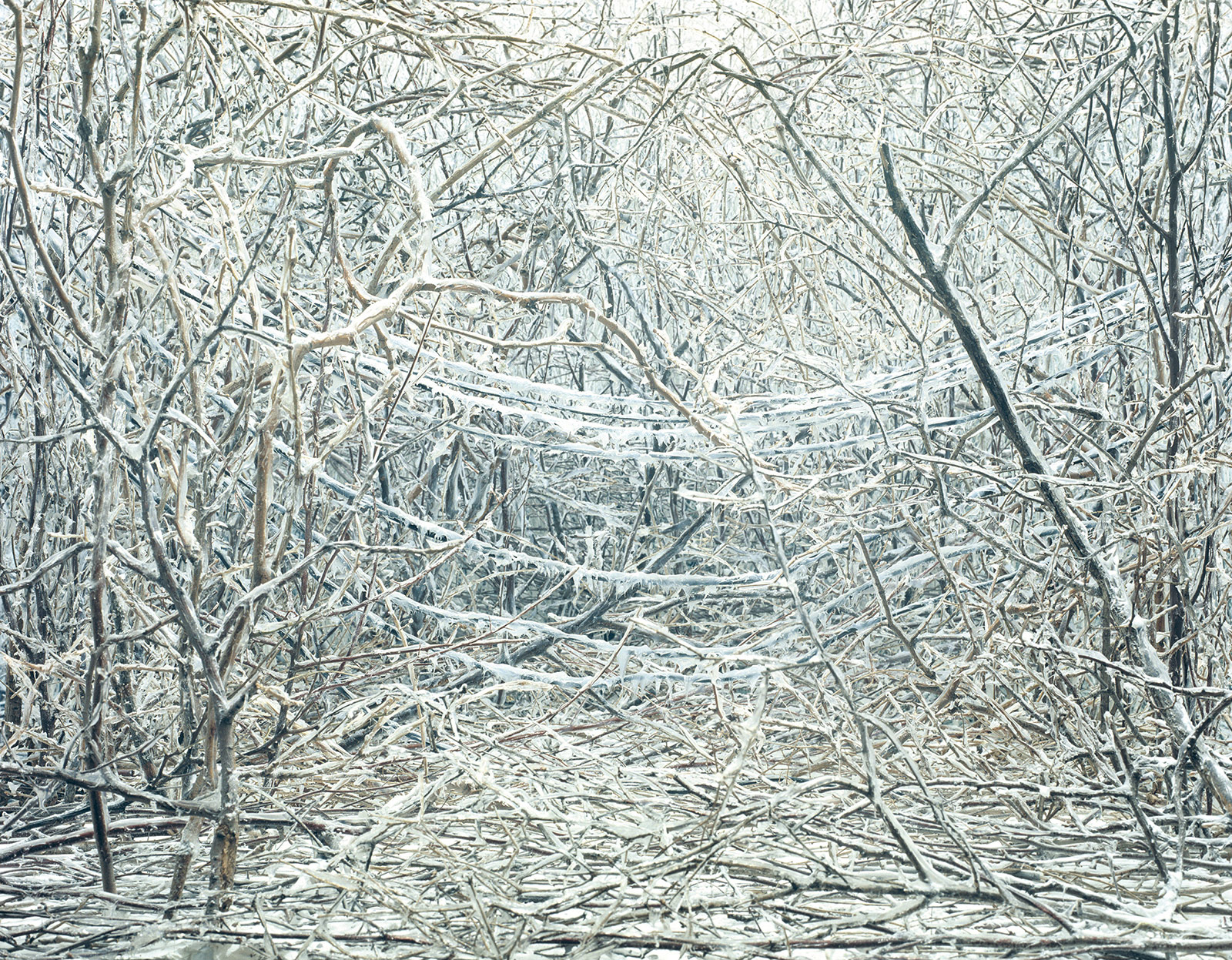 The Quiet Of Dissolution, Ice Storm.