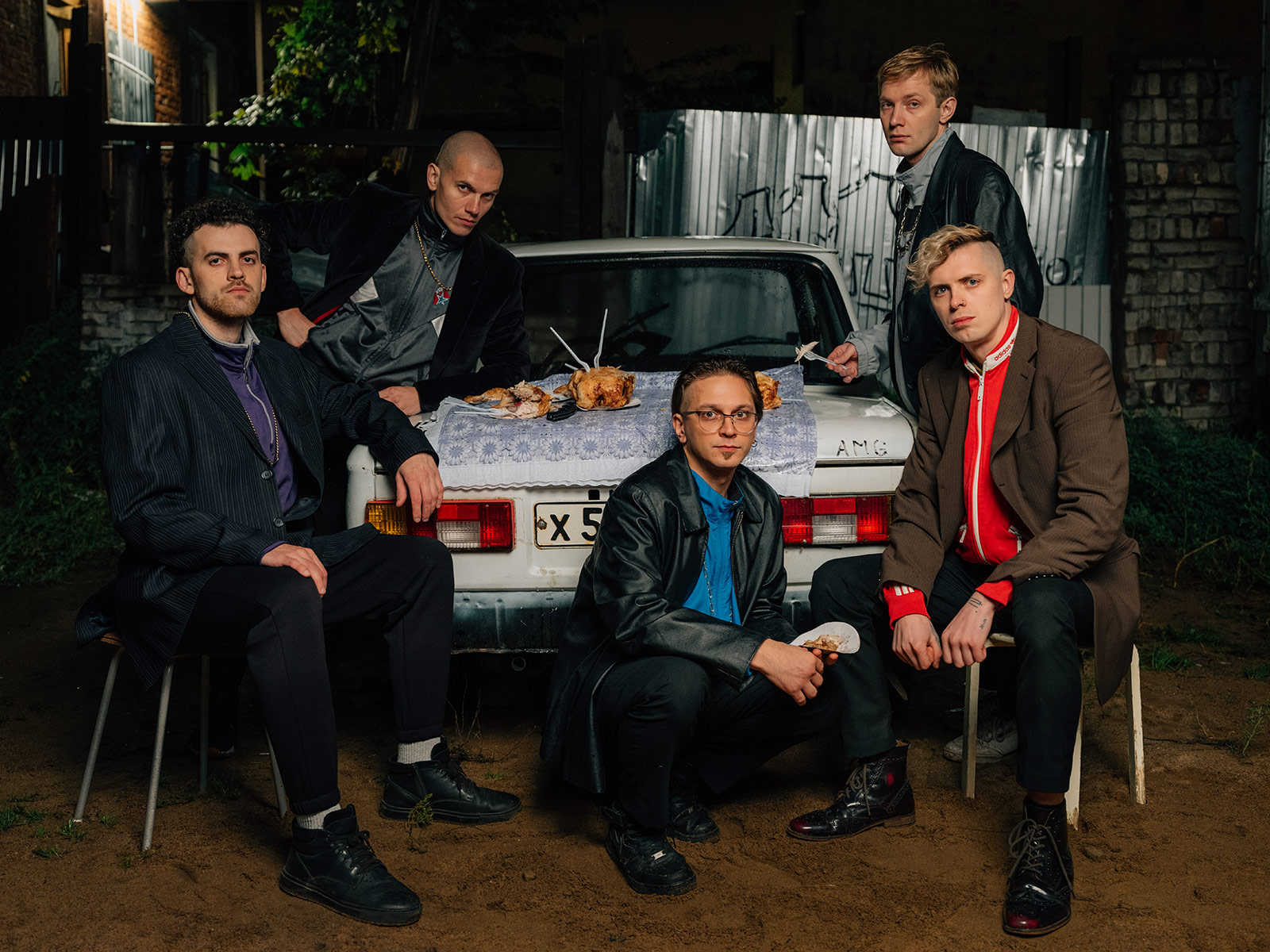 Like all good things in life, great music can be difficult to find, even harder to describe, and near-impossible to get out of your head. While this doesn’t make for a particularly quick and easy web search, that’s just how some people have summarised the stylings of Saint Petersburg-based Shortparis. Today, we chat with members Danila Kholodkov (drums, percussion), Sasha Galianov (guitar, synthesisers) and Nikolai Komyagin (vocals) about Russian poetry, musical metaphysics and the sort of albums that can make you feel cool while walking down the street or popping out to the supermarket. And death.

Would you agree with the statement that "Russia cannot be grasped with mind alone (Умом Россию не понять)"? How does that influence your artistic approach?
Danila: I would, and that’s what drives us to approach music with soul.
Sasha: This phrase, as well as the poem that contains it, were written in 1866 by Fyodor Tyutchev, who was a poet and a diplomat. It serves diplomats (and Russian diplomats especially) well to appeal to the irrational. Diplomats hold their silence for long stretches of time, diplomats value words – well, they do and they don’t. Tyutchev’s works also include one of the most famous poems about silence, Silentium, which every Russian schoolchild learns by heart. Maybe that’s where the whole idea of ‘gloomy’ Russians comes from? Back in the 1970s another Russian poet, Igor Guberman, responded to Tyutchev by stating that “The time to grasp Russia with your mind has long arrived, God damn it!”
Were you interested in art as a child?
Nikolai: As a child, I used to summon the Foulmouthed Gnome (a Russian children’s game in which players summon the spirit of an evil yet cheerful gnome), burn poplar fluff, decimate ant hills and routinely watch funeral processions involving those coffins that had the cheap red velvet lining on the inside. These marches used to traverse our yard with a bumbling, perpetually-drunk wind quartet performing a ‘funeral march’ in tow. In those moments my heart would skip a beat, struck by some sort of particular beauty. And the ants would be thanking their lucky stars for the chance to evade my murderous wrath.
You’ve described your work as ‘musical metaphysics’ of sorts. For the uninitiated, please explain what that’s about.
Nikolai: I’ll try to kill two birds with a single (mischievous) stone that answers this as well as the following question. ‘Musical physics’ would be a more accurate term for it. The considerable corporeal tension that we experience and create on stage, the expansive gestures, the wide eyes and, often, the direct physical contact with each other and the audience, is nothing more than an attempt to experience the music, something immaterial, within your body, something utmost material.
As you visualise the rhythm and the melody, the body itself becomes a sign, a symbol. A burning bush, if you will. You could say it’s a deliberate strategy or method. The dancing girl from Stravinsky’s The Rite of Spring converting the physical into the metaphysical right before the tribe’s eyes comes to mind. The intensity of dancing almost always leads you to the point of physical exhaustion. Often you want to vomit or pass out for a bit. Both the former and the latter bring us right up to the edge. Beyond it, perhaps, is where the notorious 'meta-' begins. Sasha: Personally, I don’t remember saying that. But maybe that means that music must be free of genres. When a rock band plays, say, some heavy metal, the music flows along pre-existing boundaries, simply and predictably, filling existing patterns, obeying the laws of physics. And the listeners are happy because they recognise the genre. Thus, the very existence of the heavy metal genre is a metaphysical fact – according to Plato – as genres exist ‘in our heads,’ while the specific heavy metal track that’s being played – a physical one. But if you use heavy metal to add some stylistic ‘flavour’ to a track, that’s when it becomes something metaphysical, capable of manipulating both the listener’s joy and frustration. Just when they start to recognise something – you pull the rug from under them. According to my theory, that’s how the listener elevates themselves to the ‘metaphysical’ level. And then they quit drinking, stop beating women and get a job... Just kidding.
Many listeners have pointed out your unique, infectious energy. Where do you find it amongst the nerves, long commutes, fluctuating moods, etc.?
Danila: You’ve summarised it quite well. In those and in many other things. To put it simply, by filtering the world and our surroundings through the lens of personal experience, we give ourselves a morale boost.
Sasha: As long as at least one band member is still in good spirits, doing his unique thing – the others get inspired and get on with the show.

Do you ever take inspiration from the works of classical artists, especially the more rebellious ones like Mozart, Michelangelo, Fragonard?
Sasha: I once heard this story attributed to the research of Carlo Ginzburg, in which a miller from a Medieval European town, having read fewer than ten books in his entire life – and bare in mind this was back when they were handwritten and insanely expensive – came up with an entire cosmogony, philosophy and doctrine arguing that the whole world is a slab of cheese and God has found his way into it the same way that worms find their way into cheese. This is to say that people don't need to be walking encyclopaedias to develop intellectually, creatively and professionally. And you certainly don’t need to listen to Mozart, because Mozart totally sucks. Oh, and the miller was burned by the Inquisition if you’re wondering.
Nikolai: I disagree with Sasha, though he did bring up an amusing example. Still, I think that this whole ‘God of Cheese’ affair says more about the crudeness of philosophical constructs in times of intellectual deficit than it does about the benefits of such an approach. Cosmopolitan cultural immersion does tend to make people’s – and musician’s – thinking more cosmopolitan.
Mozart does, indeed, suck, but his body of work is miles ahead of his generation, and in some cases – of himself. One of the problems with independent Russian music is that the new kids only burrow through the archives of their own genre, essentially reproducing it over and over. It’s ‘totally rad’ and all, but it would be nice to get something that ‘totally sucks’ for a change, like Mozart. Basically, young musicians are often isolated in their own subculture and disconnected from tradition (but unintentionally, unlike futurists). Perhaps this limited scope of their horizons, limited knowledge of global art history, is the exact thing that prevents them from reaching the very peak of failure – or success – of our time.
How do you feel about silence?
Danila: I’ve never actually heard it. It’s a spirit which I’ve been chasing after my entire musical life.
Sasha: I consider silence as the floor. I mean some base, you build on.
What do you think about Putin’s 2020 press conference and musician Sergey Shnurov’s question posed on behalf of Russian television?
Danila: About Sergey Shnurov, I think it’s sweet and pointless. A good example of what Russians would call ‘foolishness and bravery’ in action.
What’s so special about graveyards and have you visited any of the famous European ones like Père Lachaise?
Sasha: I grew up on Vasilyevsky Island in Saint Petersburg. Ever since I was a child, my dad used to take me for walks to a huge cemetery near our house – the Smolensky Cemetery that sits on the bank of the Smolenka River. He lies there now, buried right next to the director Balabanov. Overall, the cemetery is a space that symbolises a kind of triumph over death. Death dissolves into life, and life grows out of the dirt in which we’re buried. Walking through this dirt is fun – and humbling. And the music in your headphones always sounds less meta-physical, it becomes just physical.
Nikolai: I’ve been to Père Lachaise. The cemetery itself wasn’t all that impressive. I did meet a couple of drunk workers who’d just dug a grave for a recently-deceased Chinese millionaire, though. They’d led me up and down the cemetery for more than an hour, with heavy shovels over their shoulders and equally heavy, stony stares. It was late enough that the cemetery had already been empty. And so, I began imagining my mangled body, laying there with a shovel sticking out of its head, as well as dozens of other scenarios of my imminent murder. But alas, I was spared, shown the grave of Jim Morrison, and chatted about the pension reform and the plight of the French proletariat. So, maybe, nothing’s special about them. Everyone still gets drunk, be it at the cemetery or in their apartments. Everyone still criticises Macron, be it at the cemetery or on the metro. No one wants to die from a quick whack with a shovel, be it at the cemetery or the supermarket.
Have you started feeling ‘cool’ yet?
Danila: I feel fatigued and invigorated by the fatigue, is that what it’s like to feel ‘cool’? What does that even mean, ‘to feel cool’?
Nikolai: I never would’ve thought of it like that. But after our album Easter (Пасха) dropped, one of my friends mentioned in passing that our music is perfect for confidently walking down the street, ‘feeling all cool.’ At the time, I found such an oddly-specific use for music really funny. I imagined our tracks in some outlandish catalogue, between the ‘sex music’ and ‘car ride music’ sections, labelled as ‘walking the street feeling cool music.’ Let’s hope that the new album will also make you feel cool while buying bananas at the supermarket.