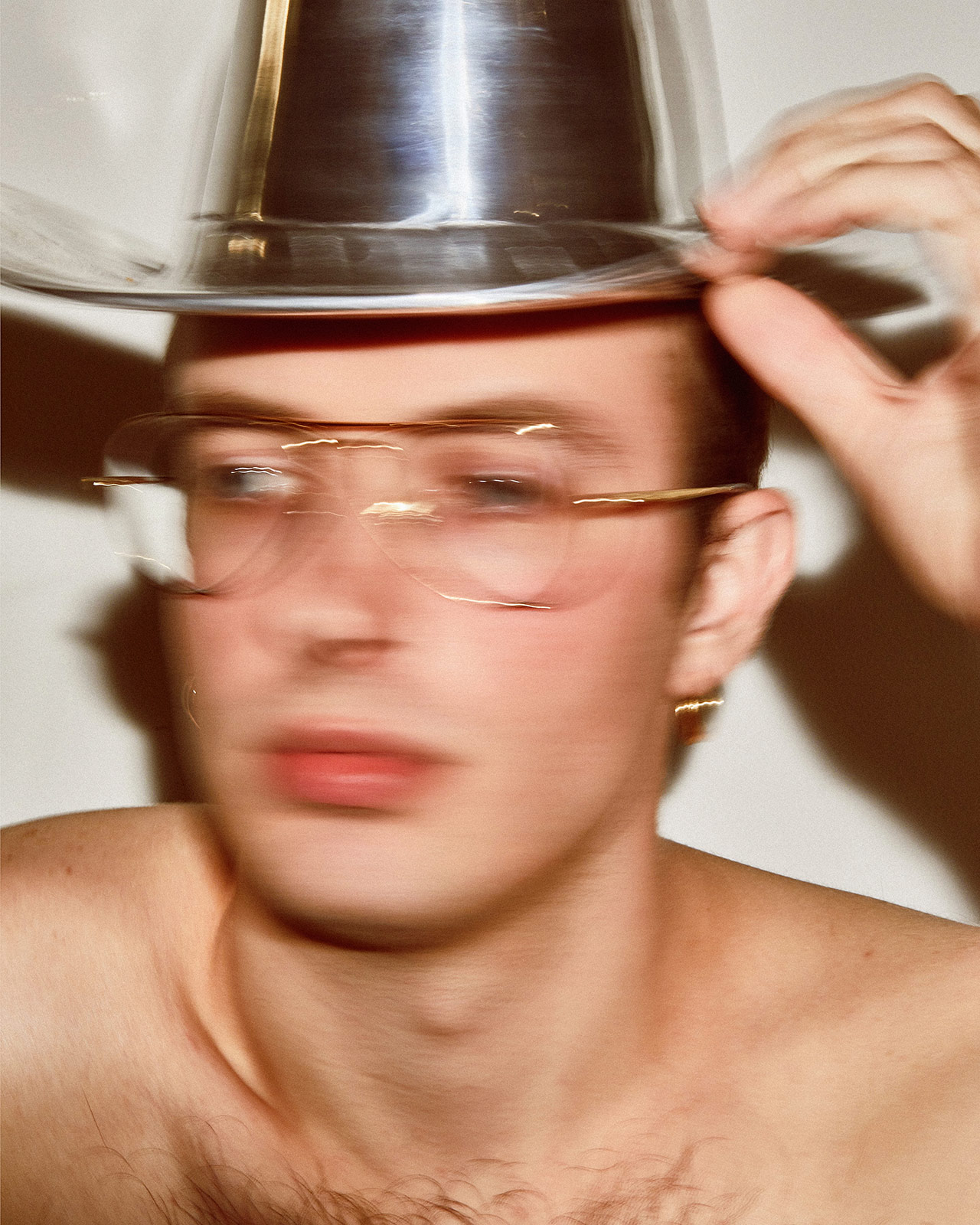 There really is nothing new or groundbreaking about any queer art piece using nudity or homoerotic sexual themes, to use artist Scott Csoke’s own words: “Gay art isn’t just about sex or a naked guy on a bed.” This is only one of the many funny and brutally honest phrases that the Rockville, Maryland born queer artist uses as part of his cake painting series, which to our delight flooded our social feeds and went viral during lockdown earlier this year.
His paintings are not only visually appealing, depicting colourful cakes in a variety of shapes and sizes, but they also serve as an extremely effective and humorous political and social commentary tool. Inspired heavily on his own personal experiences as a queer man and those of other minorities who live oppressed by the patriarchal society in the United States (and the world), he uses his work to speak up on and for issues which affect these communities internally and externally.

In particular, he targets the gay community where social media and dating apps have become toxic communities where the fewer clothes you wear the more likes you’ll get. Places where mental health is completely disregarded and things like racism, bottom-shaming, and an array of other internalised homophobia behaviours reign free and supreme. Which is why his art has been such a breath of fresh and fun air in 2020 which has been for, the most part, pretty grey. 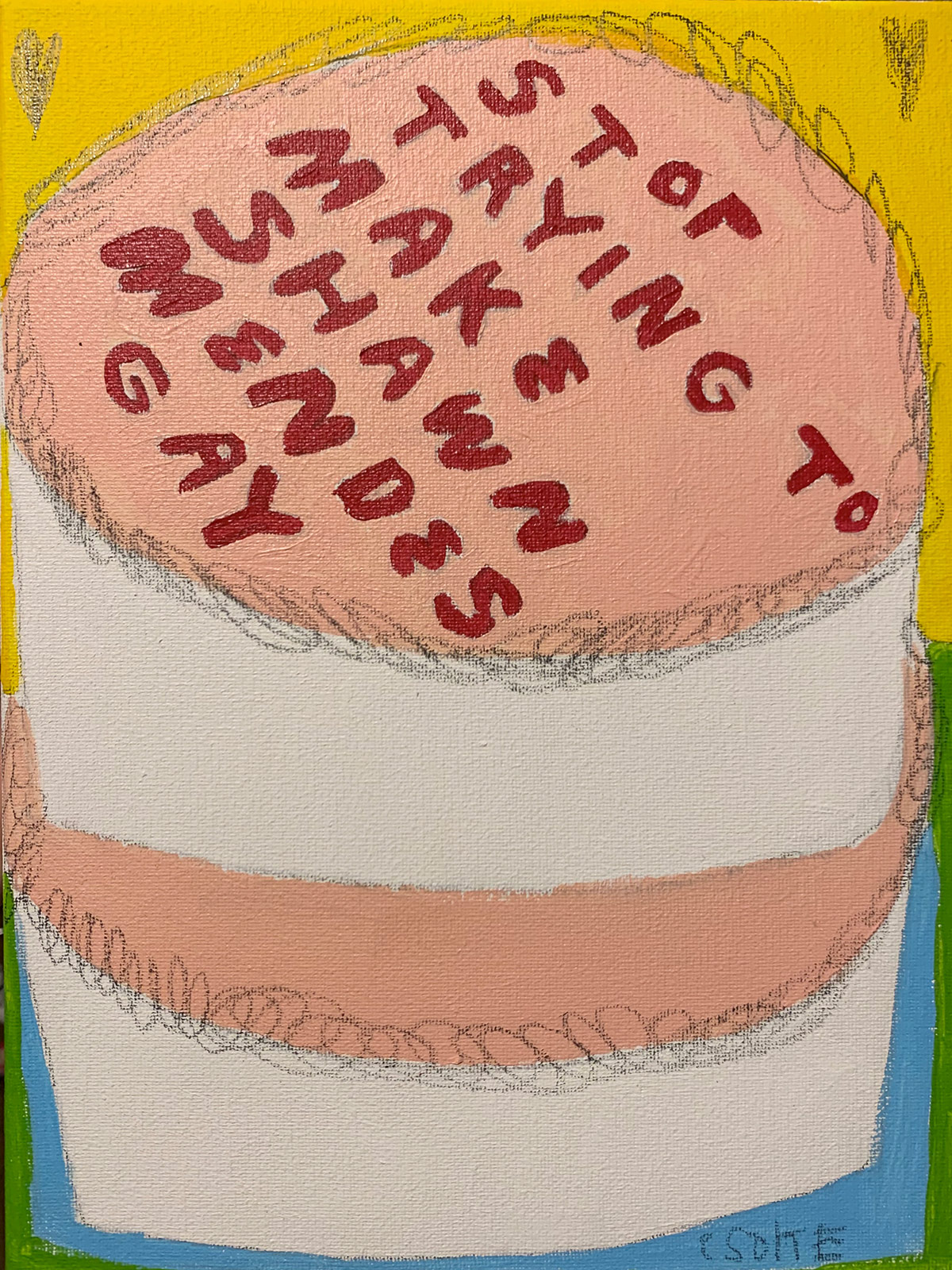 Imagine this is Tinder for a minute. How would you describe yourself and what you do in your bio in order to get a swipe right?
I don’t have much luck on Tinder, but I will try. I am a (recent) full-time artist living in Richmond, Virginia. Also, I’m a Virgo.
What was it like growing up there? What's your fondest childhood memory?
I lived in Richmond the longest, but I grew up all over the place: Maryland, Kentucky, North Carolina, and then Virginia. Excluding Maryland, they are all fairly southern places. Spending most of my time in Richmond was definitely a challenge for me, though. Making friends was difficult, coming to terms with my sexuality was difficult, but all of that fizzled out once I got to art school. I think my fondest childhood memory would have to be discovering art. I spent so much time alone that it was the one thing that really kept me busy.
Where does your inspiration usually come from?
Life experiences are my biggest inspiration: self-awareness, criticism, dating, mental health, culture, family. I try to be as honest as possible with my work, which can be emotionally exhausting, but I think since I started making art and going to therapy at the same time, I use them interchangeably. I don’t romanticize things so it’s easy for me to just recreate things that are happening to me in real-time.
Did you always want and know you were going to be an artist? And if you had not ended up being an artist what do you think you’d be doing?
I think I knew from a young age that I was going to be different. I never really imagined myself doing things that I saw my friends doing or even family members doing with their lives. It felt incredibly lonely, but I didn’t feel like I had another option. I don’t really have any other skills – I’m terrible at math and science, I have terrible short term memory, and I love doing things my way. I don’t think any of those things really foster a career in a large corporation.

“There is so much blatant racism that men try to rationalize as a 'preference' but that does not make any sense. You don’t have to be attracted to everyone – that’s impossible – but if you are publicly stating your distaste for an entire group of people, that is unacceptable and there is no room for that.”
How would you describe the art you make?
I think I touched on this a little bit earlier, but the word I would use is honest. It’s not trying to convince you of anything, It’s my point of view, it’s my opinion, it’s subtle humor and sometimes obvious humor. I am extremely scattered in the work that I make, too. I work on one thing for months and months and then do something completely different, which I think sometimes goes against what Instagram has deemed 'acceptable' from an artist.
I accidentally stumbled across your work on someone's Instagram story and I am forever thankful because I love it. What’s your relationship like with social media both personally and as an artist? And I guess what’s your opinion in general about social media?
I really do not like social media. I think it’s incredibly damaging to everyone’s mental health. However, I am aware that it is the way the world currently operates. I don’t think it will be around forever or operate the way that it does now forever. As an artist, I am grateful that it has led to so many amazing opportunities and most of my collectors have come from Instagram – which is still so surprising to me. I think of it as a business card and people can look at it, lose it, whatever they want with it, it’s up to them.
Where did the idea to do the cake series initially come from? Which one was the first you painted and I guess why did you decide to do it?
The first cake was just plain with no writing. I had previously (about a year prior) worked on a series using the same phrases and ideas, so I just decided to write them on the cakes. It was a very natural pairing for me. I love to write text and being able to say exactly what I want, so I felt like this was a very easy way for me to get my ideas out clearly while still illustrating something less serious and cute. 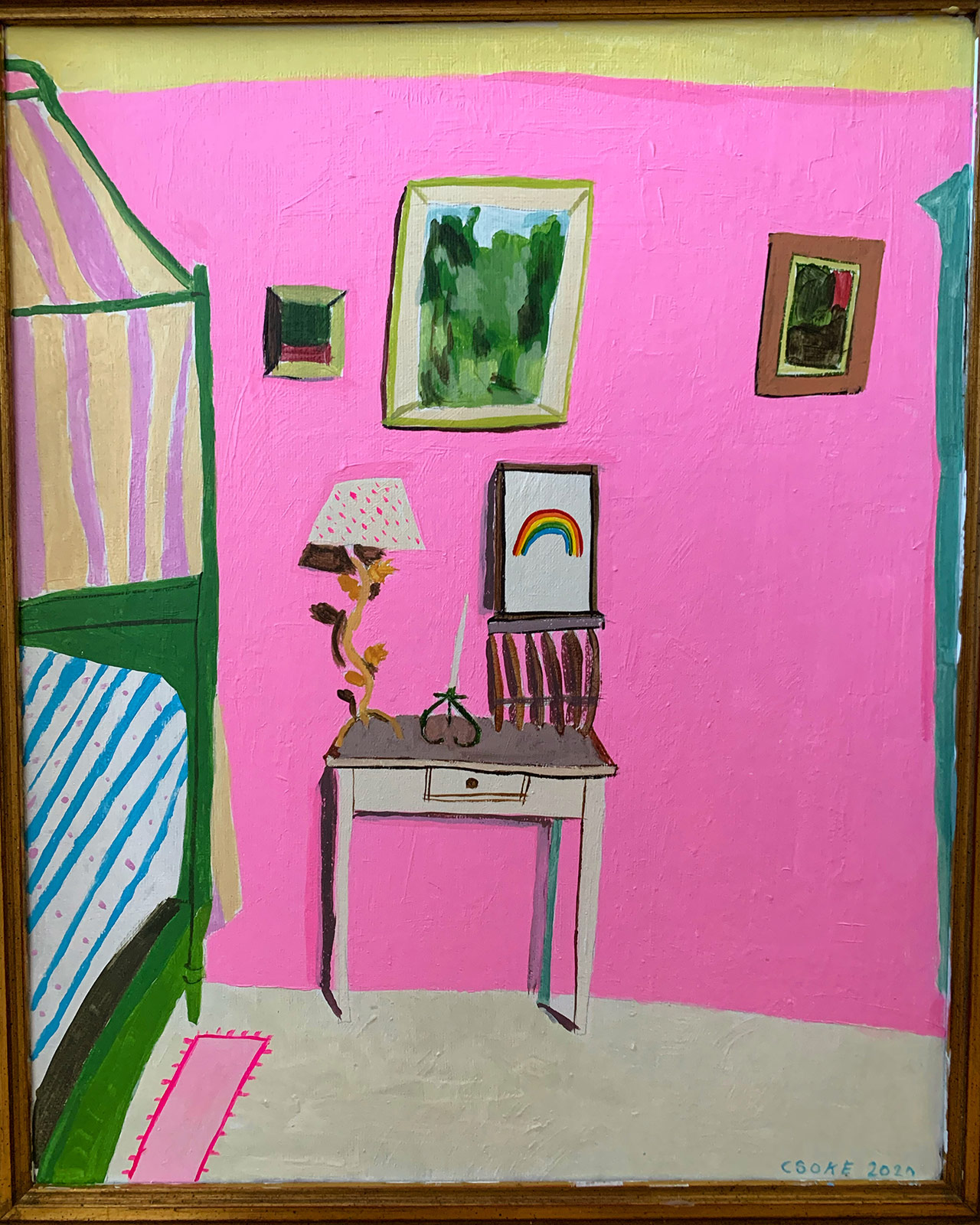 The phrases you use are all comedic commentary on gay culture and lifestyle. As a queer person yourself, what are some of the things that in your opinion need to change within the gay community? Or what are some of the things that bother you most?
I think gay culture will be one of the biggest puzzles of my life. I could really go on and on about it because there are just so many issues that need to be addressed. I think the biggest one is racism. There is so much blatant racism that men try to rationalize as a 'preference' but that does not make any sense. You don’t have to be attracted to everyone – that’s impossible – but if you are publicly stating your distaste for an entire group of people, that is unacceptable and there is no room for that.
Gay dating and culture feel so primitive (in our society, not in actuality) because I think we haven’t really been able to experience it freely in the way that heterosexual people have. Gay men come into relationships and into their own sexuality with baggage. Going back to social media for a moment, but honestly what could be a worse idea than trying to date on social media? In my experience, people have carte blanche to speak to you, ignore you, humiliate, and harass you in any way that they please.
This also deters gay people from being open to date. It also encourages people to settle for someone who may not be good for them because they might think, “this is the only option I have.” It’s really upsetting to me because the LGBTQ+ community deserves better and the options we currently have are not helping matters.
Have you received any negative reactions to any of your paintings from the cake series?
Definitely. I think it’s hard for some to discern whether or not I am being serious, which usually I am not. The topics I write about are serious, but the way that I phrase it on the cakes, not so much. Whenever I talk about masculinity is usually when I receive some pushback. People think I am not allowing people to be masculine or themselves or that I hate masculine gay men. That is not true at all, I have masculine gay friends but I think they have some work to do within our 'community.'
Do you have some sort of ritual or a thing you do when you paint or take photographs?
My work is very premeditated – so I often come to painting or drawing with a very clear idea in mind. I think about things over and over and continuously plan it in my head and then I paint or draw that thing. Sometimes I watch a show or a movie and sometimes it’s completely silent. I have been trying to get better at stepping back and actually looking at what it is I’m working on—I get too focused and forget to pause and look at any large issues in the piece that are happening. I also don’t pay attention to what colors are 'right'. I had a painting teacher in high school that told me, “If you see a color just put it there even if it doesn’t make sense” and I have been painting the same way ever since. 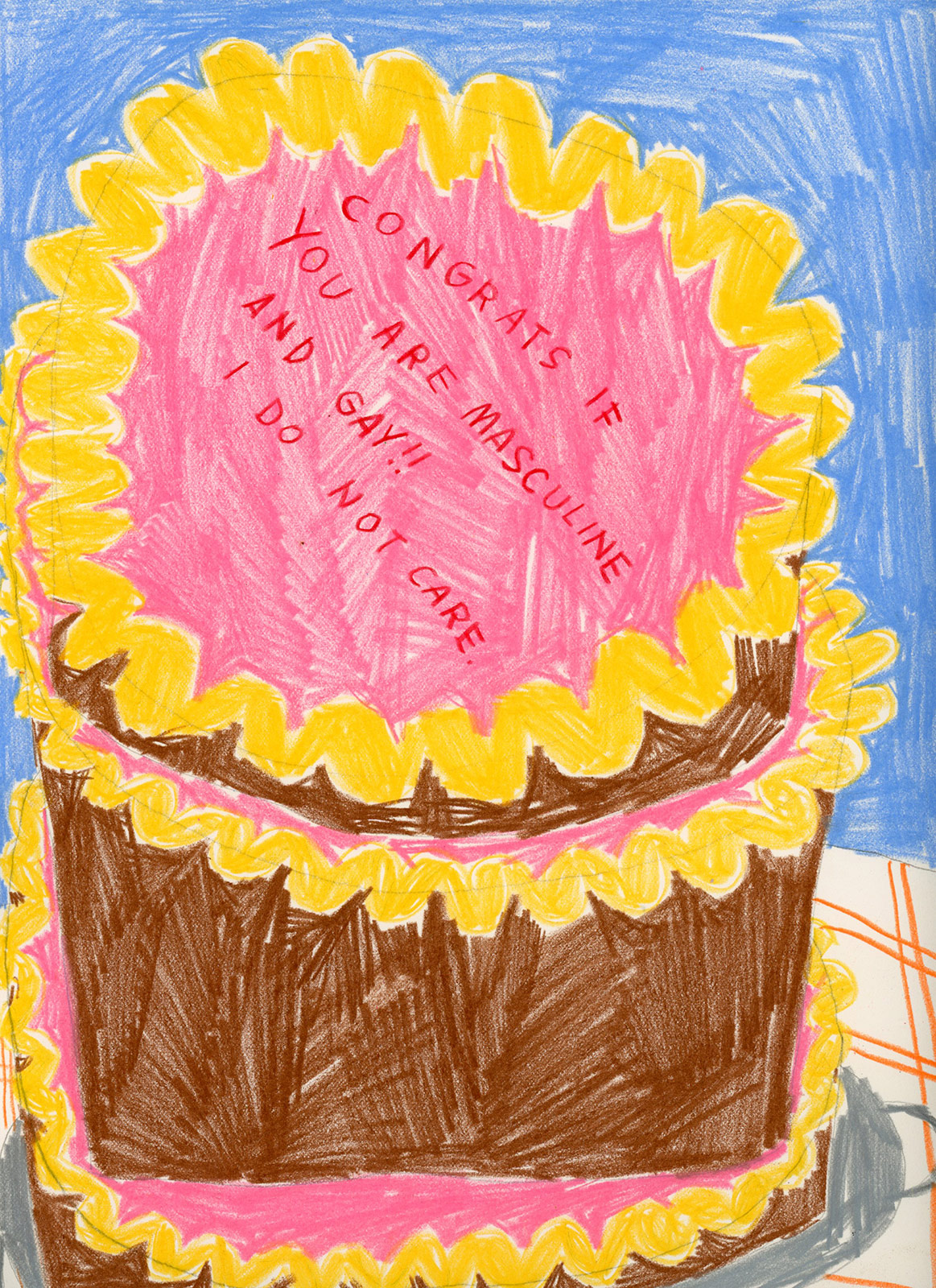 It’s been a crazy year, what’s been the highlight? And what’s been the worst moment?
The highlight for me would be being able to support myself with my art, it’s been such an arduous journey to get to this point and I feel extremely lucky that I am able to do that. The worst moment would be to be reminded just how much work we still have to do as a country and as a population. I am skeptical to say we are moving in the right direction because there is so much to be done regarding race, the climate crisis, and hopefully Joe Biden and Kamala Harris will lead us into a better direction.
Can you recommend any queer artists of any field that you’re really into right now?
I’m not sure if everyone I mention identifies as queer, but I would definitely say: fashion designer Christopher John Rogers, and painters Will Cotton, and Michael Doyle.
Are you working on any new projects/collaborations/commissions right now that you’d like to share or what would you like to work on next?
I have been particularly drawn to interiors and just decorating in general so that has been my other quarantine hobby. Painting scenes of interiors has been so relaxing and an escape from my own surroundings. I also have a bigger project coming up in 2021 that I’m very excited about – I can’t share too many details yet, though.
Finally, what are your hopes for the year 2021?
I don’t want to jinx anything, but I would love for everyone to feel a sense of calm – however that happens. Personally, I want to continue to paint and enjoy what I am making. 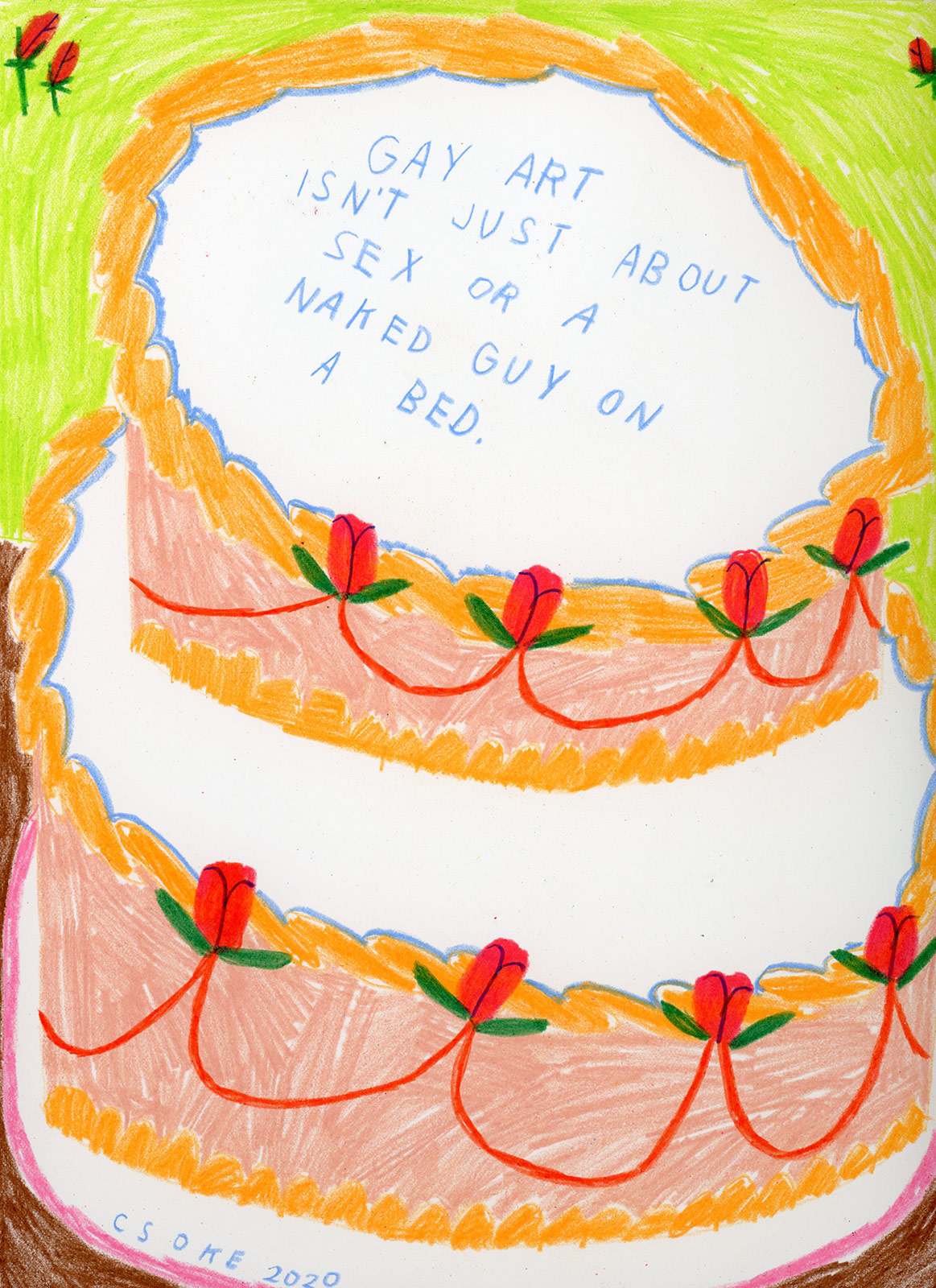 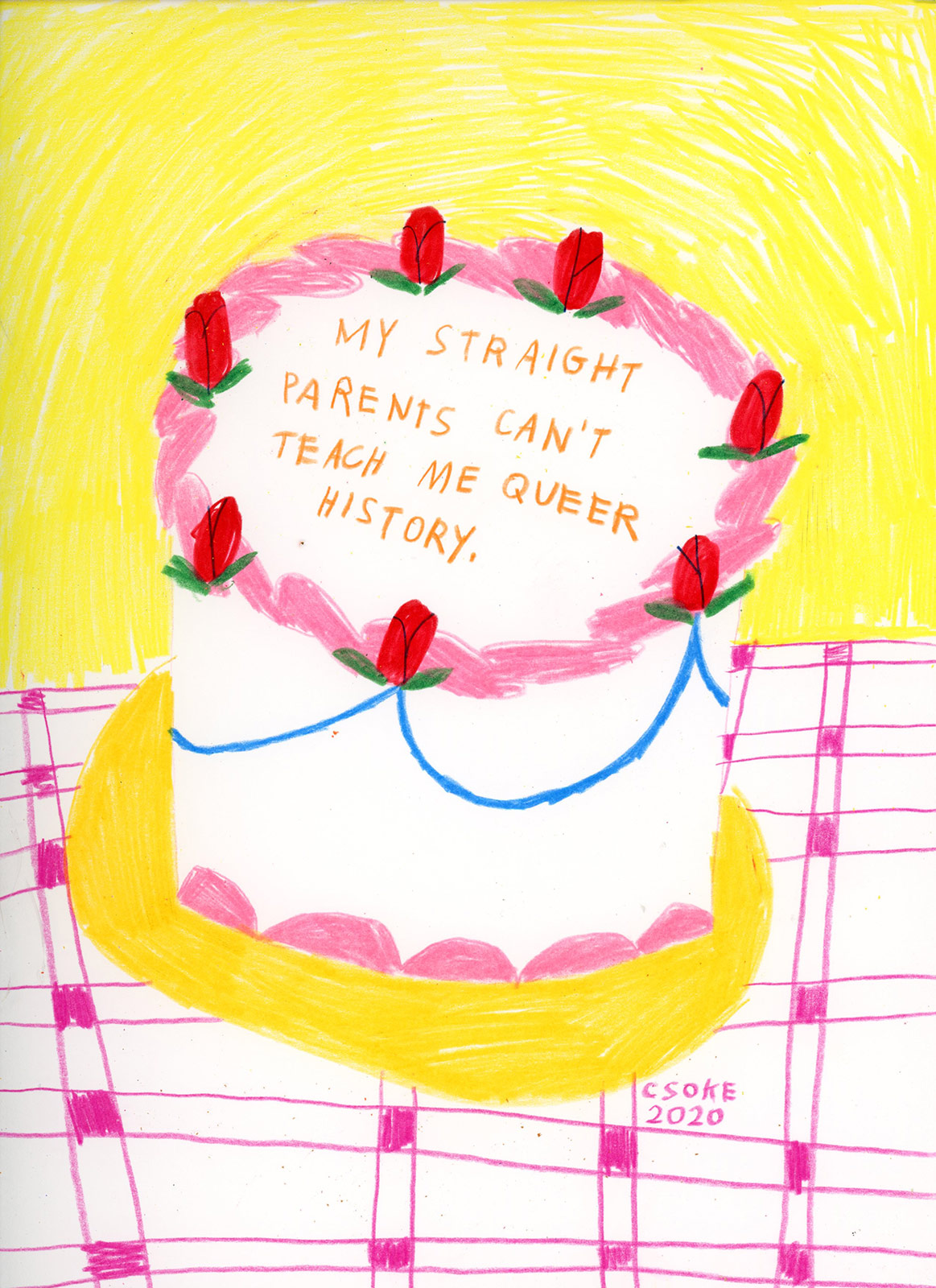