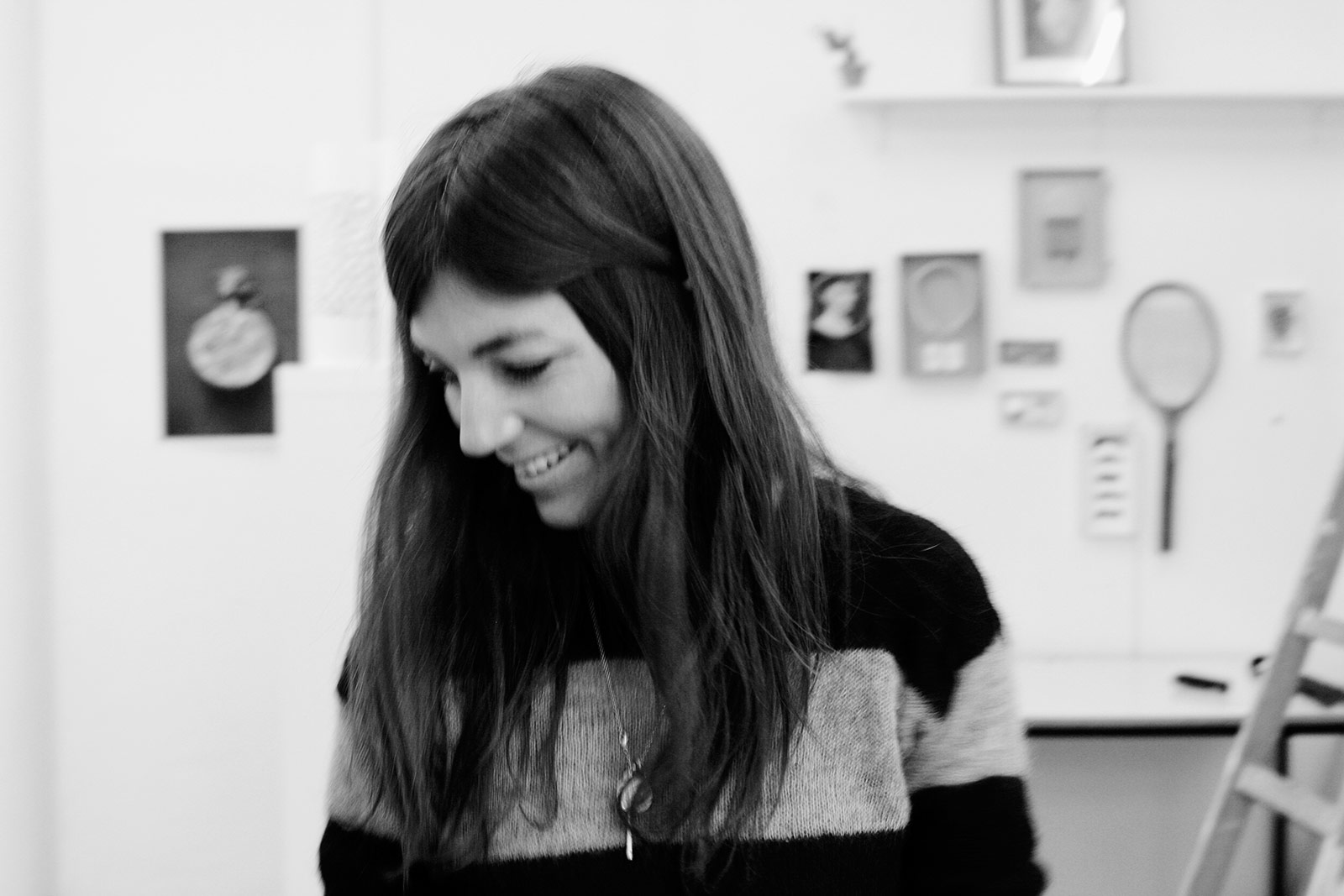 This German artist knows no boundaries: she uses flowers, fruits, furniture, light bulbs and anything you can think of to create cheerful and fun images. Sarah Illenberger has also worked for great fashion maisons, been featured in several magazines and exhibited in art galleries. Her work moves between photography, set design, art direction, sculpture and more. With such a complete profile, we talked to her to know more about the soul who turns flowers into fireworks.

Your work combines photography, graphic design and, in many occasions, fashion. What did you want to become when you were a little girl?

I always wanted to work in the creative field. At the age of 10 I told my mum that I wanted to become an artist – she got a crack up. In those days you couldn’t be an artist, society had to declare you one. I sold my first cigar box collages at the port of a small island in the Cyclades. With the money I earned, I bought fish from the local fishermen that were coming in the evenings.

You often decontextualise objects and give them an alternative utility, aesthetic or point of view (a pineapple turned into a disco-shining-ball, beards made of flowers, a carrot lipstick, etc.). When did you realise that you could see things from a different perspective?

I think my time in London really shaped me in that sense. British humour and wit influenced my way of seeing and observing my everyday surrounding and environment. Taking photos on a daily basis trains you to look at things more closely and discover the details and fine nuances to them. My eyes are always wide open and I try to see the world through the eyes of a child. Today I got a brief to illustrate an elephant: I wanted to do something with heavy rock, as that’s very symbolic in my eyes. I actually found a big rock in my archive that was shaped exactly like an elephant. Sometimes I am just lucky!

Both your website and artworks are full of bright, vivid colours. Which one is your favourite and why?

My favourite artwork is always the last one I created. In this case, it is a more natural coloured series of images I photographed in Porto, Portugal, called Almada (like the name of the street I stayed in). The ready-made assemblages feel like little treasures – since all the objects are collected and found in the local neighbourhood and garden. I like both the simplicity of these images and the fact that they touch the most elementary parts of life: fire, water, air and earth.

You’ve created pieces with all kinds of food, flowers, paper, boxes, popcorn, light bulbs and even door handles. Is there any object or material that you’d like to work with and still haven’t?

I carry a small list of materials that I want to use in some way or another... But usually the choice of material underlies the theme and concept of the story. I have been looking at the stucco on my bedroom ceiling for the past year and thinking what I could do with that. Yesterday, I decided to build a wedding cake with it. It worked out well! 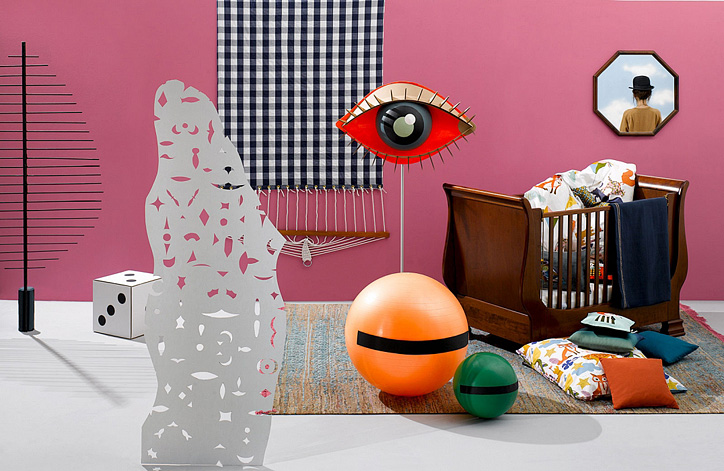 In some of your works we’ve seen influences such as Magritte and Arcimboldo. What other artists are your sources of inspiration?

There are a lot of artists I am inspired by. I enjoy the irony and versatility of Sigmar Polk or Erwin Wurm, Hans-Peter Feldmann and Maurizio Cattelan. Thomas Demand has obviously been an inspiration in terms of the paper work. Although the first paper installation that caught my eye was in my hometown, Munich, where a stationary shop in the university had hung paper lingerie on a washing line. That sparked my love for paper. I am also very influenced by women icons in art such as Frida Kahlo, Meret Oppenheim and Patti Smith.

You studied Graphic Design at the prestigious Central Saint Martins. Did you acquire the love for fashion there? Or did you like it before? (Or do you work for fashion brands, but you’re not interested in the fashion world itself?)

We didn’t have much to do with the fashion people at St. Martins since they were in separate buildings. I enjoy fashion to a certain extent. Most fashion brands for which I work want more than just a look or image. They are interested in the story telling part of my work. It’s very challenging to come up with a story around a shoe or a bag.

Furniture is also relevant in your pieces. You’ve created videos with chairs, and then created chairs out of vegetables, eggs or butterflies. Does furniture design influence you?

Furniture, like all design objects, is interesting to play with. I like to personify objects and bring them to life.

Your work is mainly shown in magazines or in places where you set the installations (hotels, shop windows, etc.). Would you like to exhibit your pieces in more conventional artistic places such as art galleries? Why?

I have exhibited in some galleries and concept stores in the past. As I am on the border of many disciplines –sculpture, set design, illustration, art direction, styling etc.– it’s hard to get recognised in the art world. It feels like you have to have studied art and be dedicated to one work practice to exhibit in galleries.

As said before, you’ve collaborated with many magazines. Could you select your favourite three and write a sentence for each one?

New York Times Magazine: love them for the conceptual language of photoillustration.
Zeit Magazin: strong visual language that challenges me to enter new territories.
Apartamento: Love the people they portray. They have managed to get rid of all the falsehood & slickness in the interior world.

Let’s focus on installations. You’ve made quite a few: Hermès, Printemps, &Other Stories and Fruit of the Loom, amongst others. How did you start sculpting and creating installations? What do you like the most about making them?

Creating installations belongs to the same process as my photographic work. I build something in three-dimensions, but instead of shooting it and discarding it afterwards, it gets a real audience for a period of time. I have always been keen on the physical process of building something. For bigger projects I have to find other people who are more skilled in certain techniques. 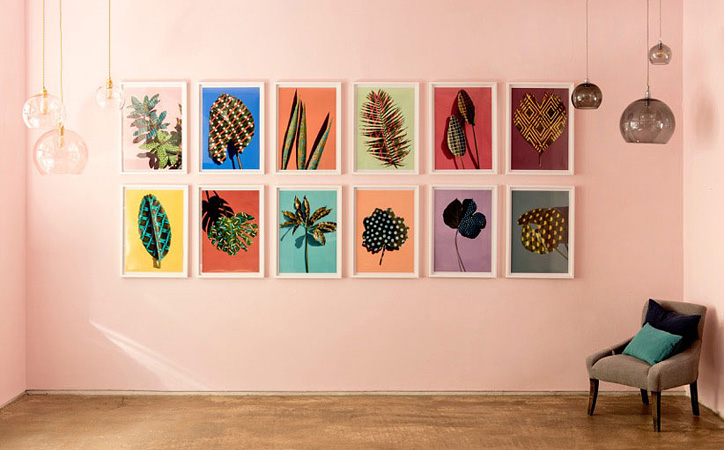 You’ve collaborated with Hermès, as we were saying, in more than one occasion. In the last one, you and your team produced 25 wooden cabinets and almost 400 paper objects. I assume that’s one of the largest productions in which you’ve worked. How was the experience? Do you prefer working in smaller projects?

This project was very intense, and my studio turned into a little factory. I was lucky to have a great team of people with me, so it always felt like a social event. Logistics were the toughest part, and I definitely underestimated the packing part at the end of the period. Still, so many things developed during the making process, that it would have been a pity to give it to a production company.

I personally love the series Flowerworks (2014) in which you arranged some flowers in the style of fireworks. How did you come up with the idea?

I was sketching ideas with materials from nature for some months: playing with leaves, flowers and such. One morning I walked into a flower shop and saw all these flowers exploding. It was one of these magical moments when you know you have hit oil.

As a curiosity: in 2011, you did a series called Heilpflanzen, consisting of herbal remedies put in the form of the body part they cured. Do you believe in natural medicine, reiki or other alternatives to the pharmaceutical industry?

I try to believe in that stuff. At least I apply to my daughter, as she is still young and unspoiled. At the end I think that psyche has a bigger impact on our health than natural sources.

What projects are you currently working on?

I am working on some self-initiated images and a children book for a new publishing house in Berlin called Tarzipan. I am travelling a lot and hope to escape the cold Berlin winter in an art residency somewhere south.

Where would you like to see yourself in five years from now? 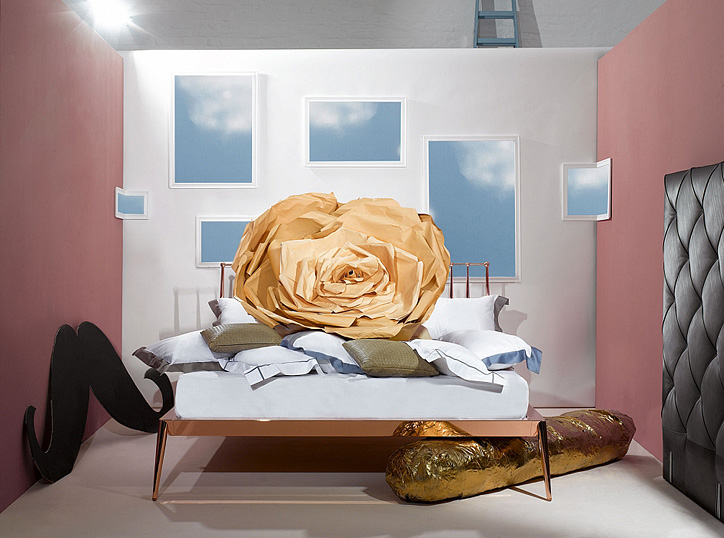 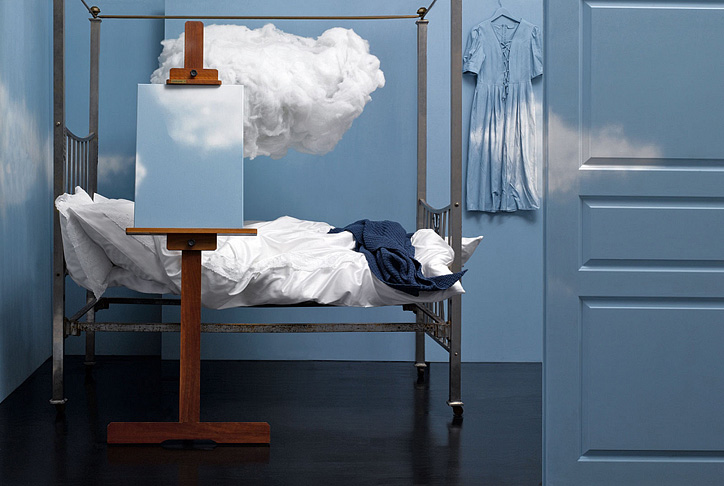 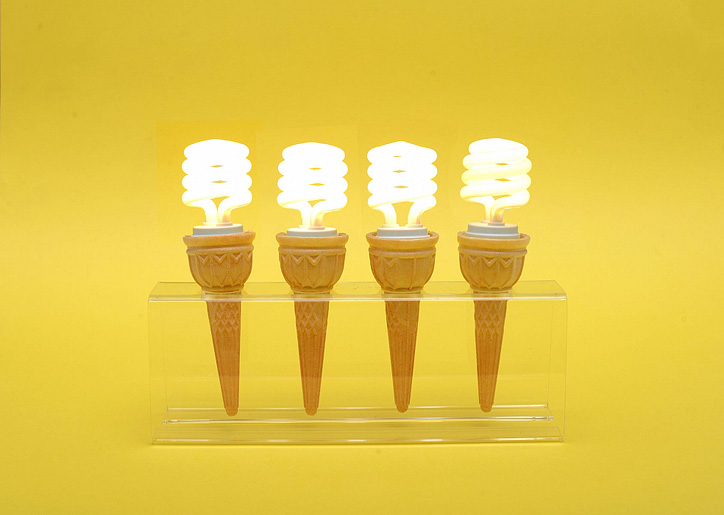 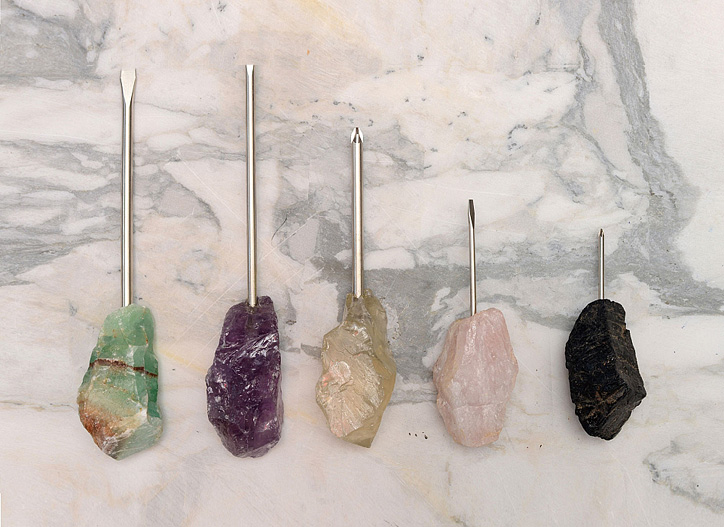 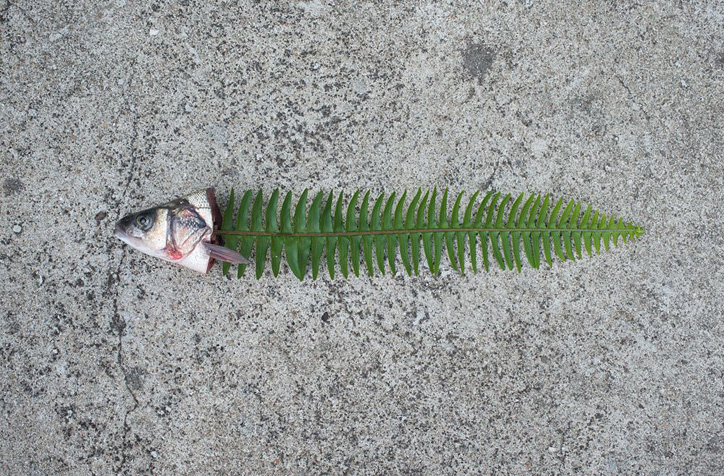 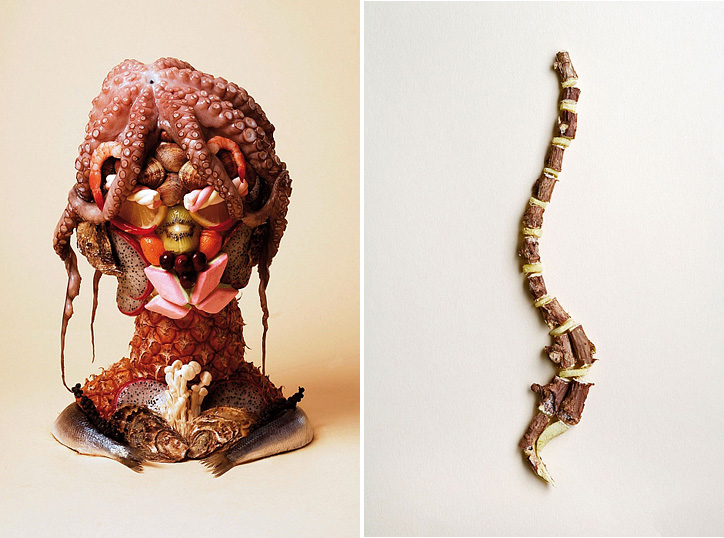 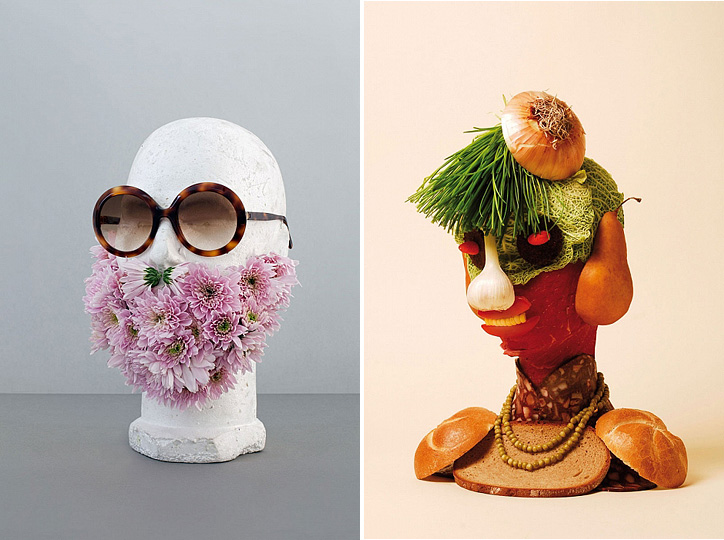 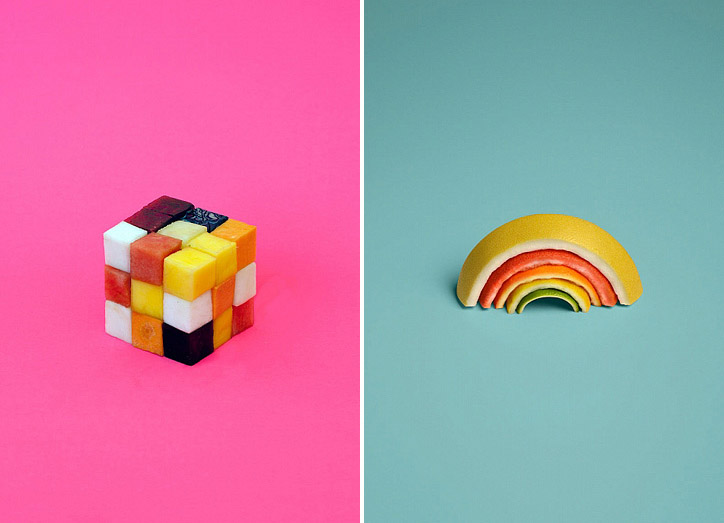 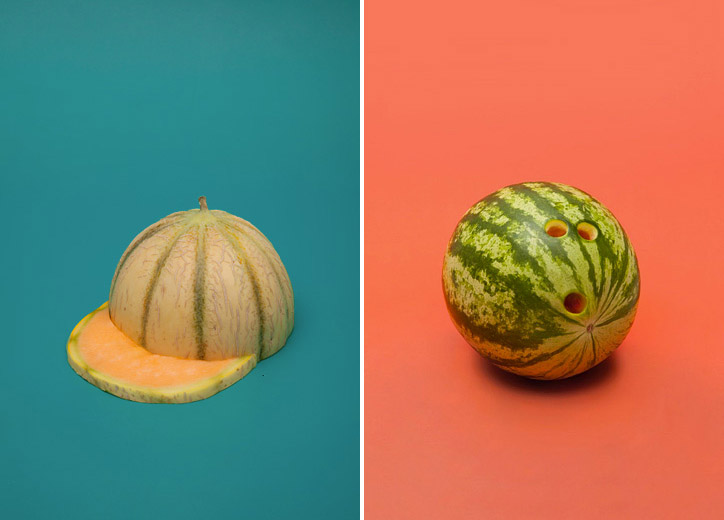 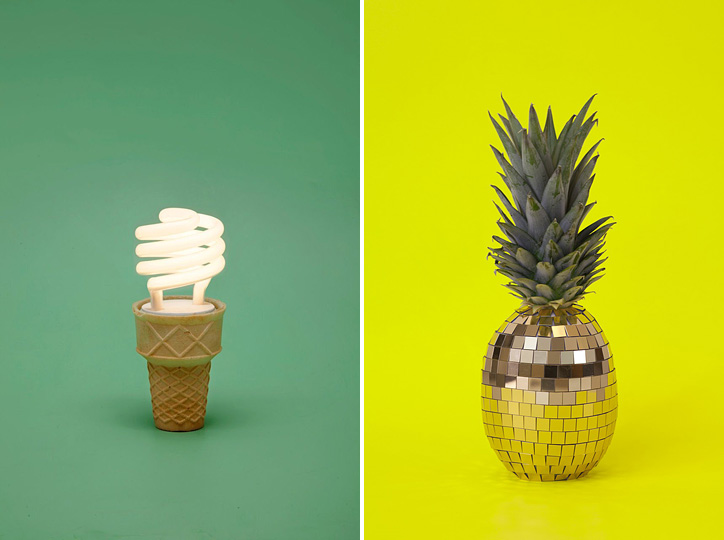 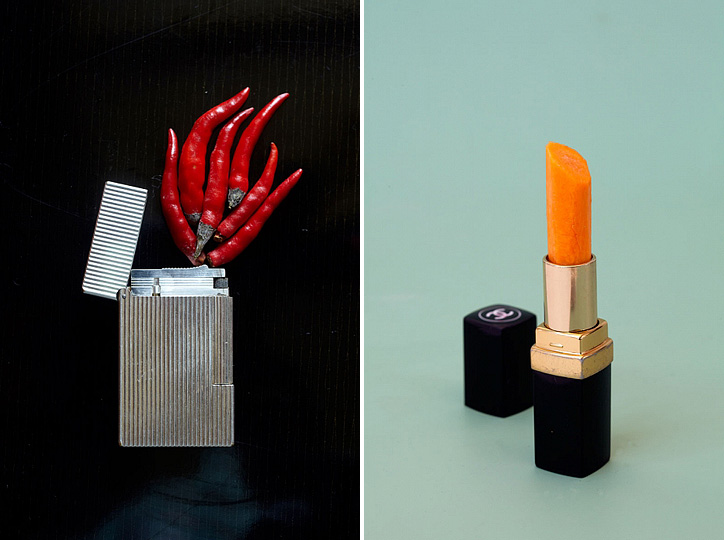 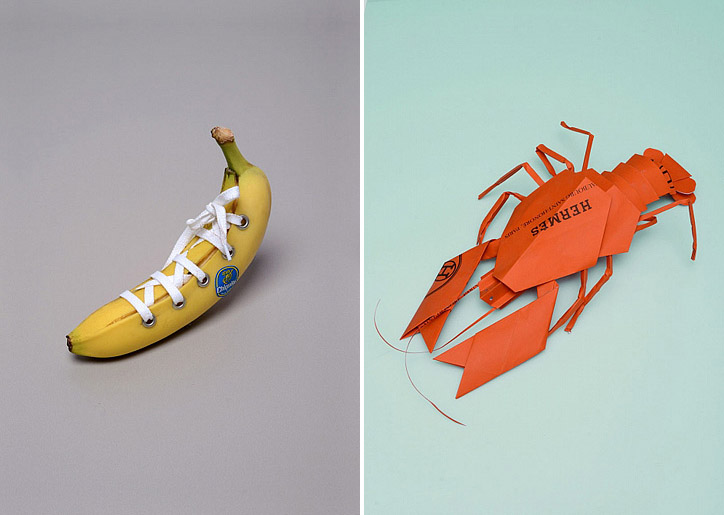 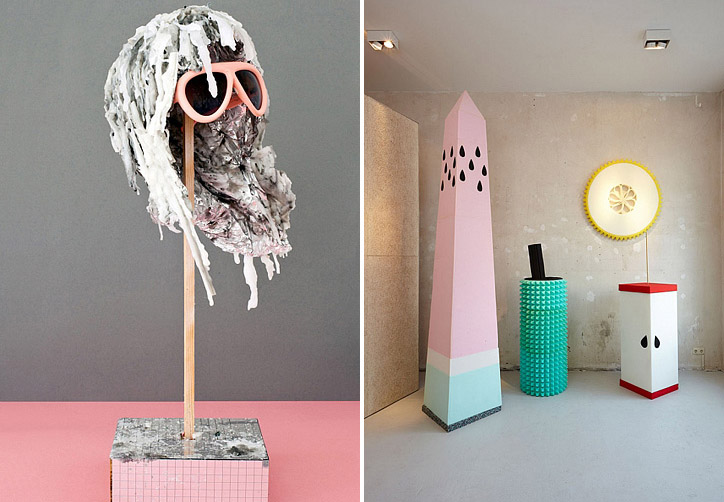 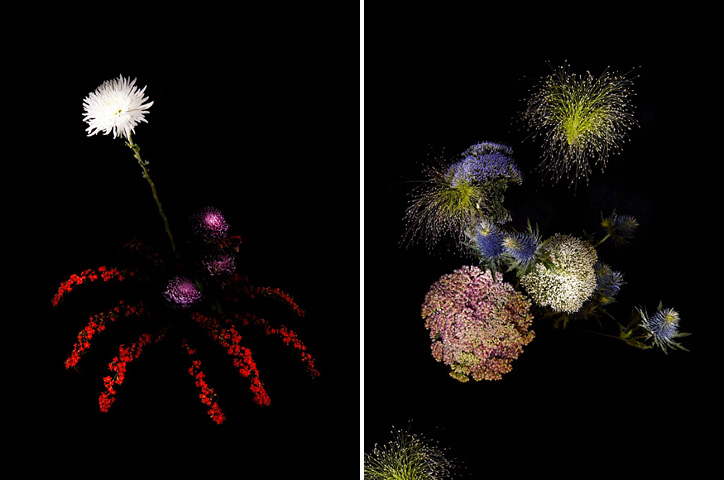 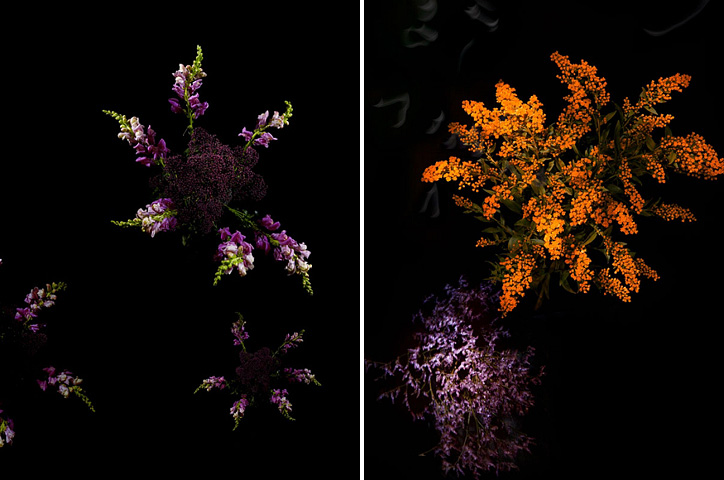 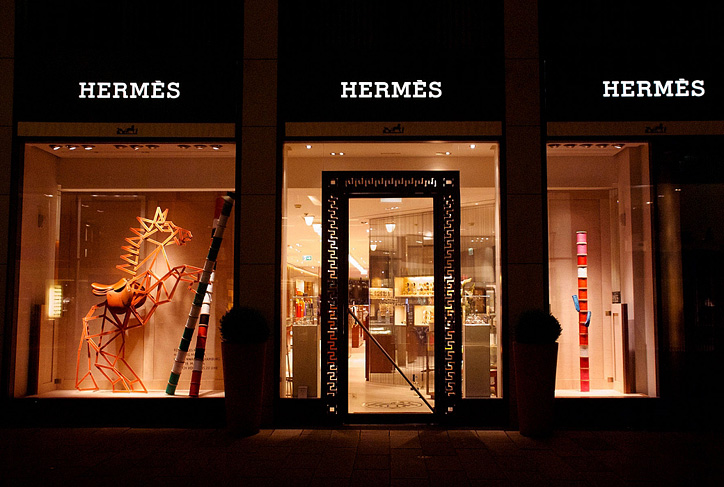