Incantations from the wood 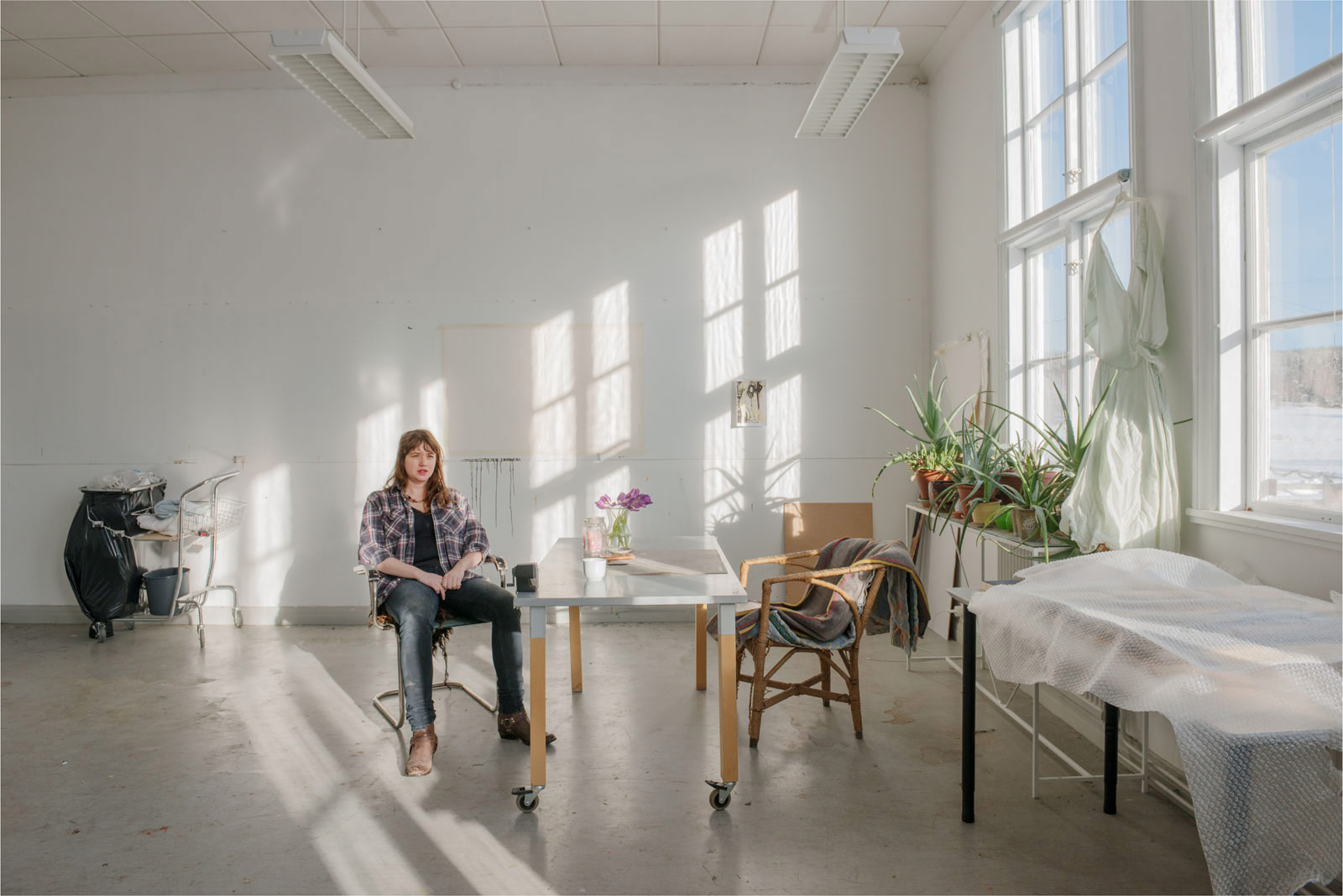 As immaterial as the rhythm of silence. As white and pure as a branch of a birch tree in winter. Sara-Vide Ericson’s universe is a visual compound of sensorial, synesthetic perceptions capable of bringing man back to his most intimate and recondite emotional regions. Born and raised in rural Hälsingland, in Sweden, Ericson has managed to represent the undisturbed stillness of her own inner landscapes through her paintings; frozen yet quivering parentheses filled with a variety of ingeniously draped scenes and experiences. Her latest series, titled Dark White, and recently presented at V1 Gallery in Copenhagen, emblematizes the natural evolution of her genteel, as well as complex, artistic path. We asked Sara-Vide to tell us more about her personal vision as an artist. 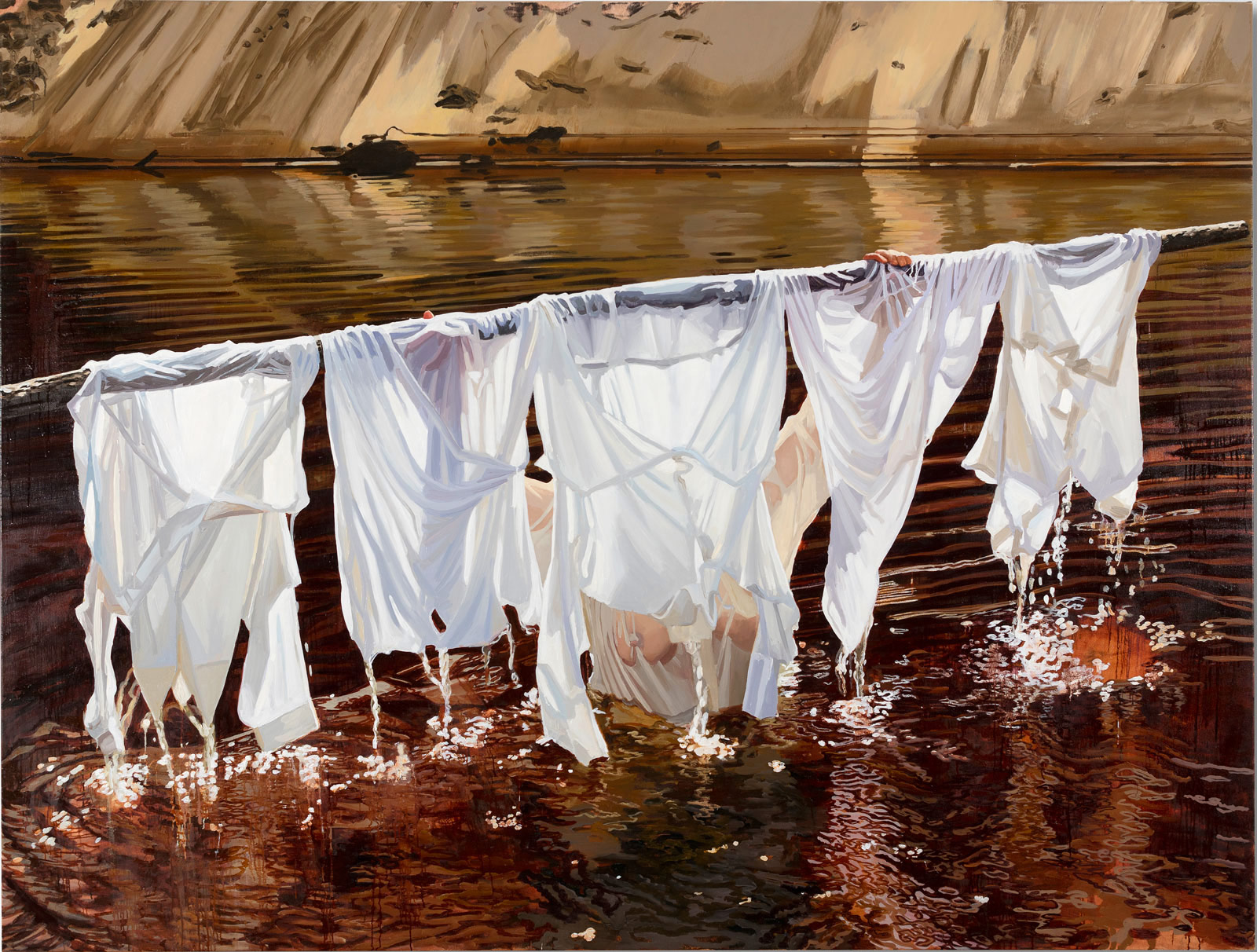 First of all, tell us a bit about yourself. Who’s Sara-Vide Ericson? A lone creator? An incessant, silent dreamer? How would you define yourself?
That’s a difficult one to start with! Maybe a dedicated, unsure and tentative, yet dead sure, goofy and explosive social lone wolf? Strongly linked to its own place on earth: the studio and the closest woods surrounding it.
You graduated from the Royal Institute of Art in Stockholm in 2009. How did your educational background essentially shape your personal thinking as an artist?
It was necessary because that’s where I was forced to redefine my goals and myself. It was a period of five years (which is quite a long time) in which I started out with a strong self-confidence. I got completely lost and devastated on the way and, after that, in total quiet and peace I had the time to slowly start building up the fundaments for my artistic vision and language.
Could you please take us through your creative process? How do you usually approach a new piece?
I’m trying to feel it before I see it. Sometimes it’s a garment; perhaps an abandoned burled pink top, that makes me feel something that I forgot. Sometimes it’s the howling sound on a particular location. It pressures me to listen, which I then feel like I have to cite and create.
Can you tell us more about the male and female subjects in your paintings? Who are they?
They are some kind of unpaid spiritual workers! They’re pointers, which forces our subconscious to engage, read and feel the poems in which they perform. 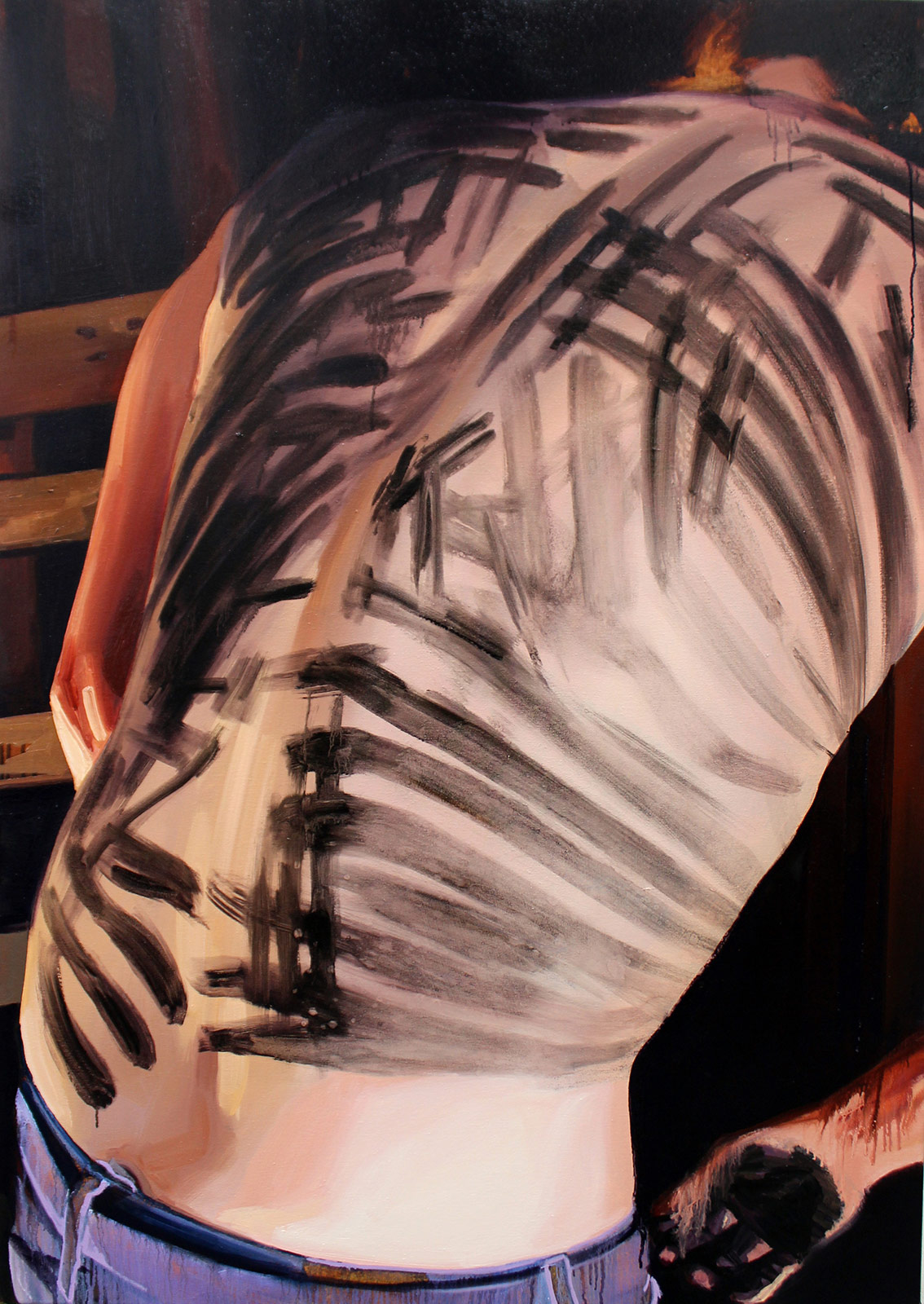 You used to paint yourself. When and why did you decide to direct your attention towards new, unidentifiable subjects?
It’s a way of creating an emotion, dare to be filled with it and live through it. I can only make art by using myself as a tool to come closer to and understand the things I investigate in. I then actually force myself directly into the eye of the storm —and feel how it feels to be standing there in the cold stream of red water, for example— before I paint it. The natural way for me is to perform my paintings; even in the one where you cannot see my presence in the final result.
In one of your previous productions —and I’m particularly referring to Hidden Beings, 2014— the viewer was implicitly considered as an integral part of your bucolic, sometimes highly dramatic, scenarios. Do you still consider the audience to be an essential part of your pictorial compositions? And, if so, what role does the viewer have in your current production?
The viewer is a necessary part of the works since the paintings are incantations and written with the purpose for being read. But the viewer’s gaze is maybe less prominent in this body of work. The latest paintings deal with more existential inner landscapes, which might be so haunting that we’re not always willing to expose them to other humans. Yet we share them.
Who’s the ideal reader of your paintings?
A person who might not look at them intellectually but rather is feeling them in the same way you feel heat, light or pressure.
The very concept of incommunicability might be considered as a recurring motif in your work. Nevertheless, in your latest series, Dark White, a soft sentiment of peaceful solitude seems to permeate the entire portrayed scenes. In this specific production, in fact, we can almost sense an inaudible affinity with the physical universe and its natural components. What can you tell us about this new series? How did the idea for Dark White originate?
That’s an amazing translation you’re making. One factor, which stoked me on the path, was a sentence in Svetlana Alexievich’s book The Last Witnesses: A Hundred of Unchildlike Lullabys (2004). When I heard it (I sometimes listen to audio books in the studio), I scribbled it down on a post-it, and it got to remain on the studio table during I painted the series. It said: “A white shirt shines far in darkness.” 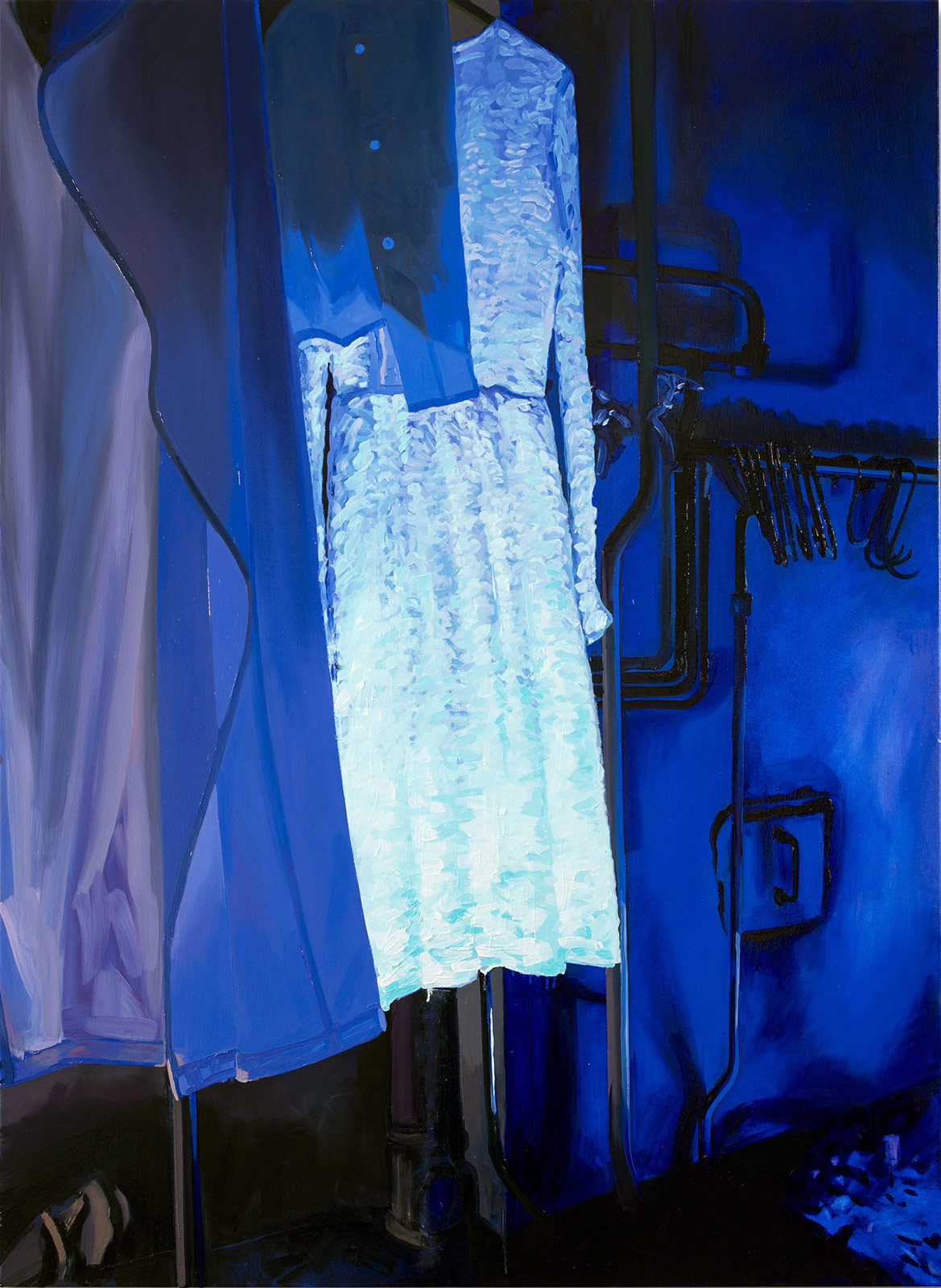 As the title would suggest, Dark White explores the physical, and metaphorical, juxtaposition of light and darkness in a rather deserted yet significant dimension. Have you always been interested in portraying contrasts and oppositions in such an eloquent, unintelligible way?
Yes I have always been interested in it but I have rarely succeeded, haha! No, but it's exactly that which I think is so difficult with the spoken or written word. That too seem credible, get your message across, and even such a basic thing as getting other people to understand what you mean: you have to file down four of the five points on the star, and only let one remain, for it to work as an arrow and to hit its target. I think that is inhibitory. The reality is not so simple, it consists of the five tips pointing in different directions, but it's still a unity with unwavering focus. Not something wishy-washy, fuzzy or sprawling
Physical sensations of intense heat or cold are also exceptionally conveyed through the naked body, often depicted as half-covered, or protected, by a blanket or a fur coat. In your latest series, however, the body seems to acquire a sort of non-corporeal lightness. It loses its weight, its intrinsic shape. It becomes pure, crystalline, free, soaked with its own primitive essence; just like the fabric that conceals its delicate curves in The Dark White Redemption, probably one of the most representative pieces of the entire production. What can you tell us about the story behind this specific, magnificent piece?
My entrance to that painting is a three-road highway. One file is this place in the woods where a river stream flows unexploited under the pine trees, between the sandbanks. It dips steeply on both side, but in one place it has created a natural sand beach. The water is clean, it comes from higher up the mountains, but it is reddish brown because of minerals in the soil. This place is for real, and always washes away my sense of powerlessness.
Another highway file are those garments, which may not seem important or special at first sight. But they’re souls, or part of souls, that I collect. Sometimes I have to steal them, cause they belong to someone who won’t let me borrow them. Sometimes they’re left in my nearness or in my path, and I just pick them up.
The third file is a memory of a scene in a high school movie, which I was playing back and forth until the VHS cassette was quite noisy at that particular place. It was a scene that depicted a wet t-shirt contest and the location was a messy market, or a party. In the crowd, which was composed of only young noisy men, was a tank of glass reminding one of an aquarium half filled with water. A flip ramp was installed inside the tank where a woman only wearing a white cotton T-shirt was sitting. Attached to the ramp was a rope leading through various shackles out into the excited all male crowd, armed with the power over the situation they could now, when least expected, pull the string and make her drop down into the water.
What’s coming next for you?
A period of less work and more thought! I’ll be presenting new works on Frieze Art Fair NY and I also have a museum solo show coming up this spring. But besides that, I’ll try to slow down and let the following paintings load air, they’re for real and have to take their time.
Lastly, where and how would you like to see yourself in ten years?
I wish I sometime got funds to build a glass roof over that specific spot of the meandering river in the woods, which I described. So I can have it as my studio. But until this crazy and self-absorbed dream doesn’t come true, I hope I do the same as now; struggling and painting me out of my dark room into the light, but with a lot of more skills and experience than now. 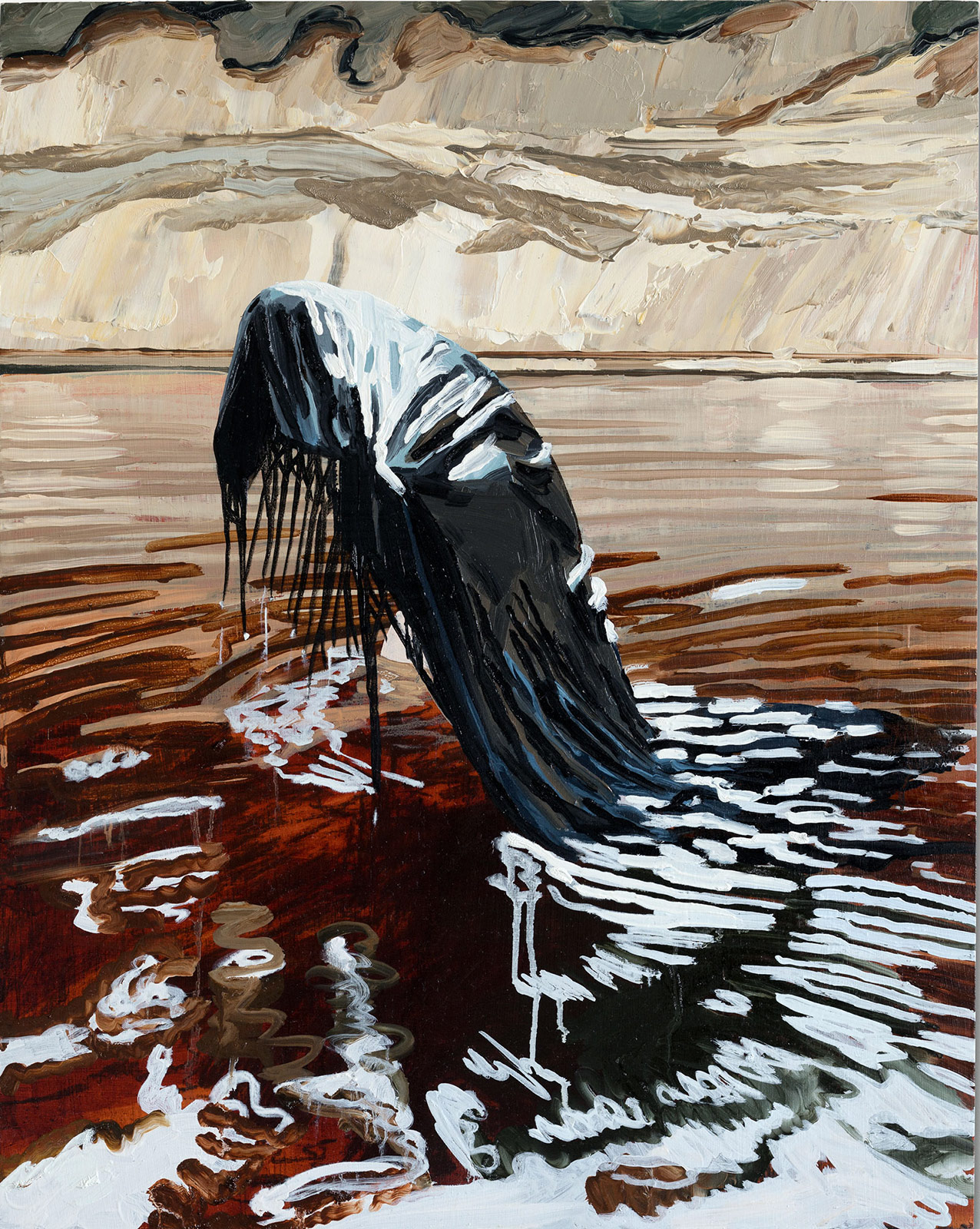 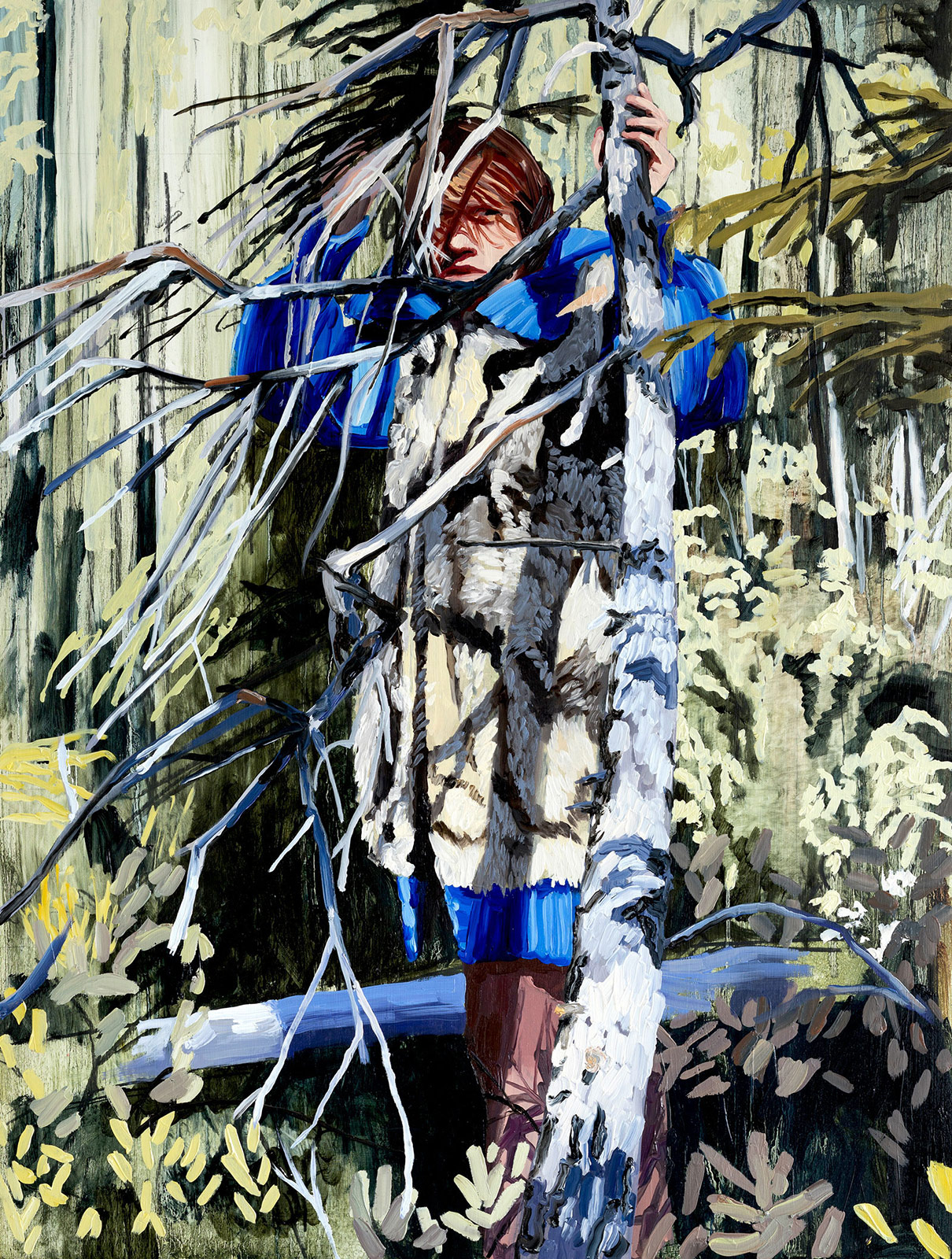 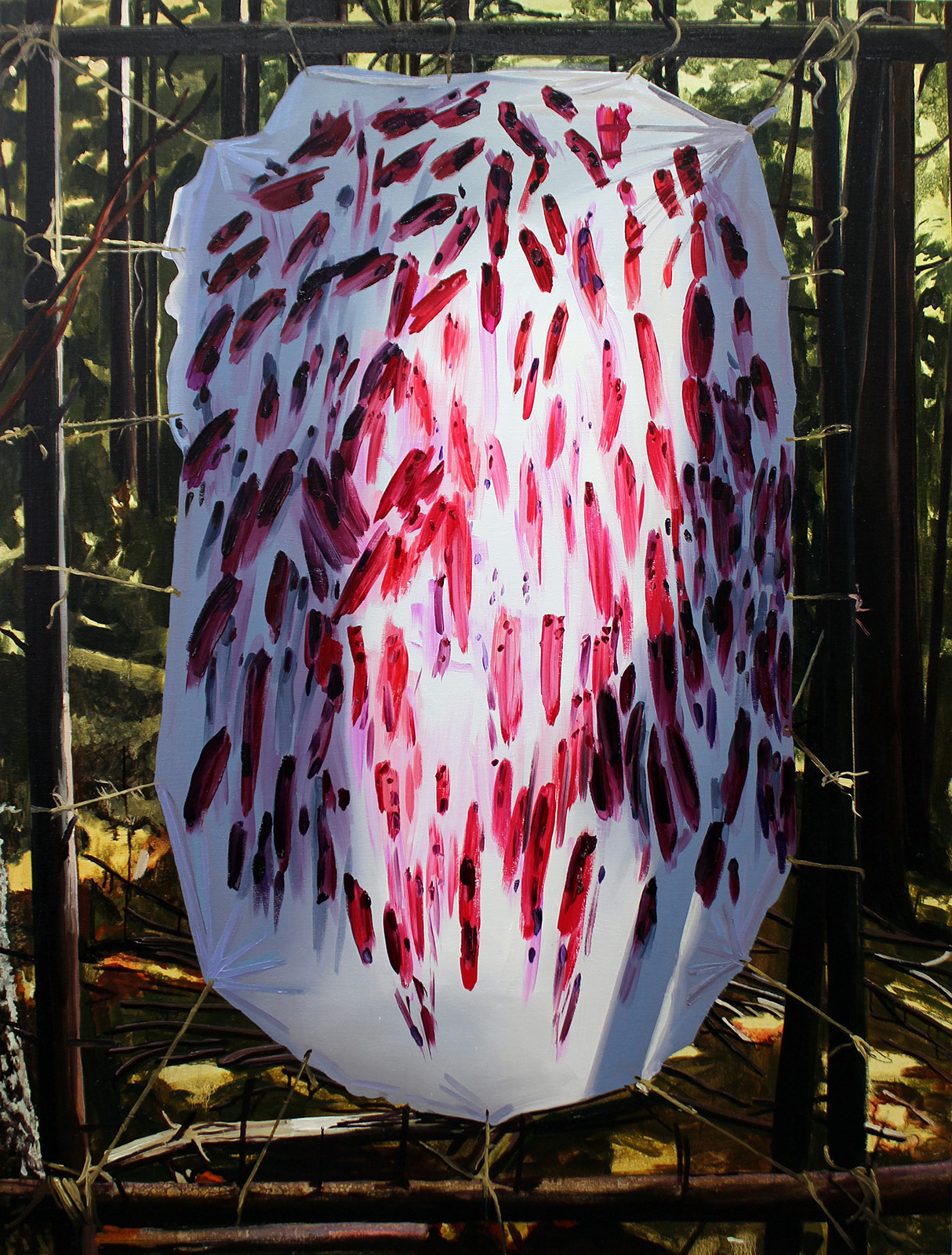 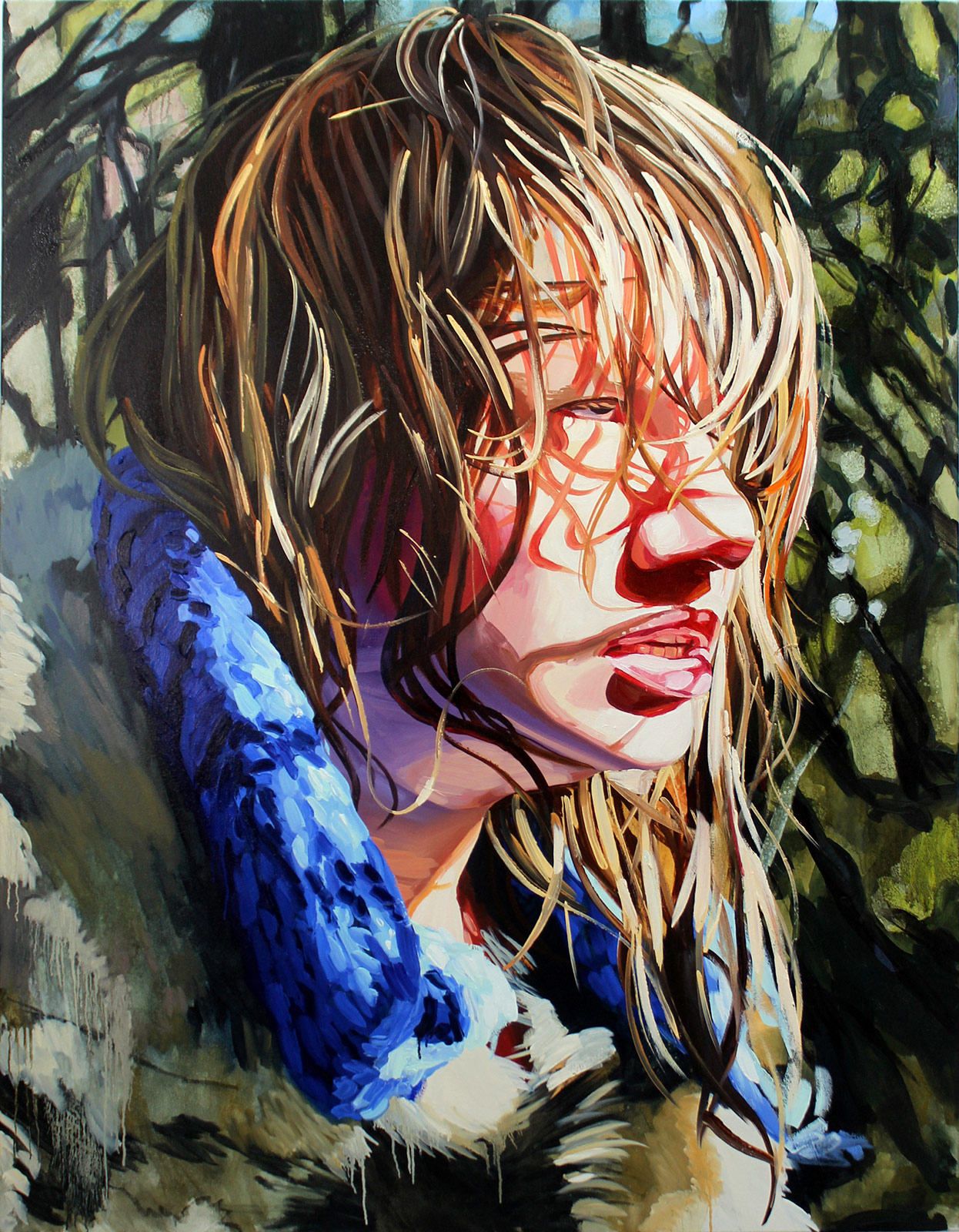