The art of being multidisciplinary 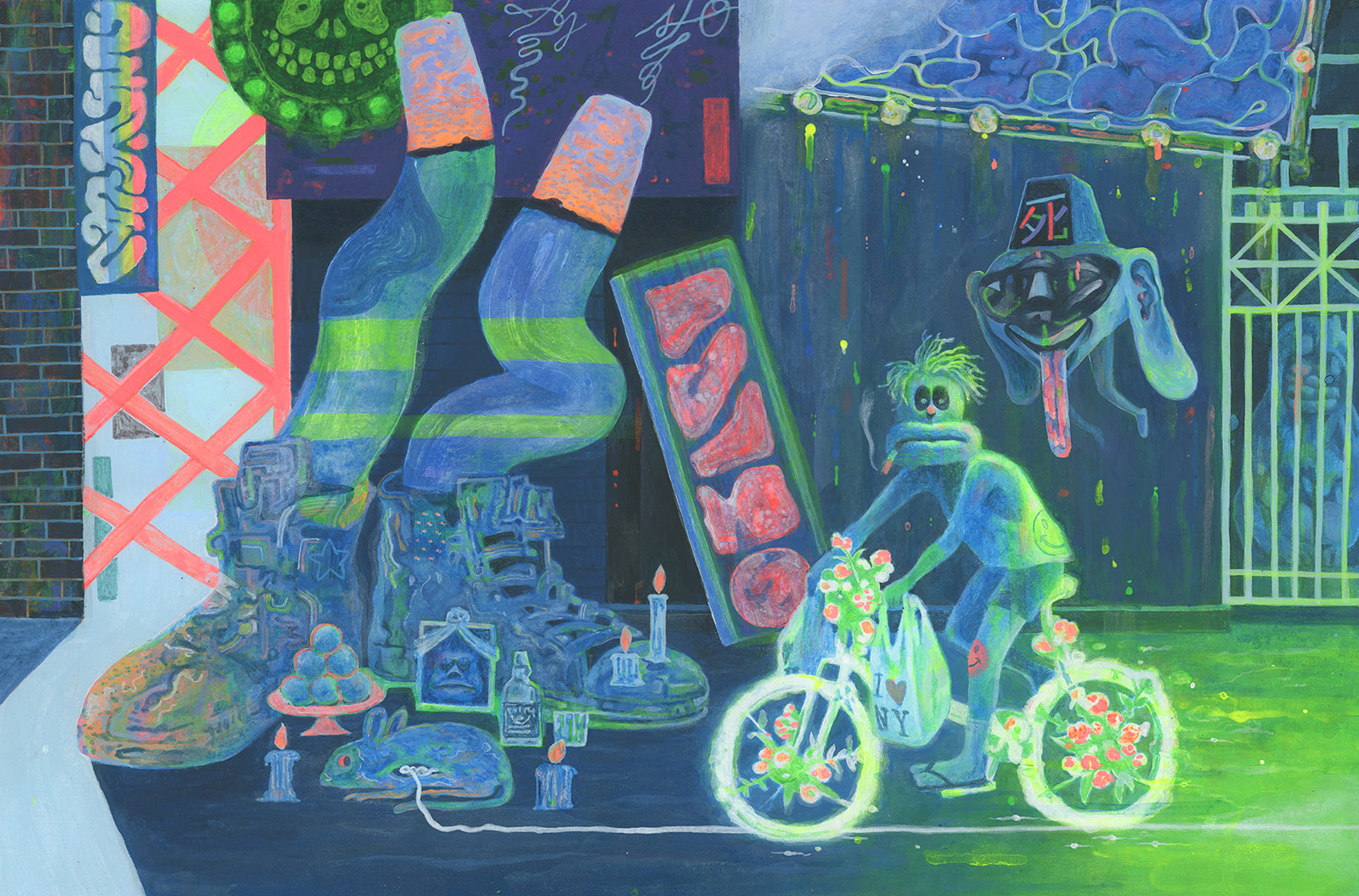 A variety of eccentric and surrealist worlds is what we can expect from the work of Saiman Chow. This Chinese artist gets the inspiration from his city, Hong Kong, and the diversity that reings there. Maybe because of the intensity of this city or maybe because of the spontaneity of Saiman’s creative process, his artworks are so vibrant and explosive. In his psychedelic and kind of chaotic world, you’re able to find also harmony and balance. Saiman’s expression doesn’t only consist on illustration, he also directs short films and animations, and he creates really funny gifs. 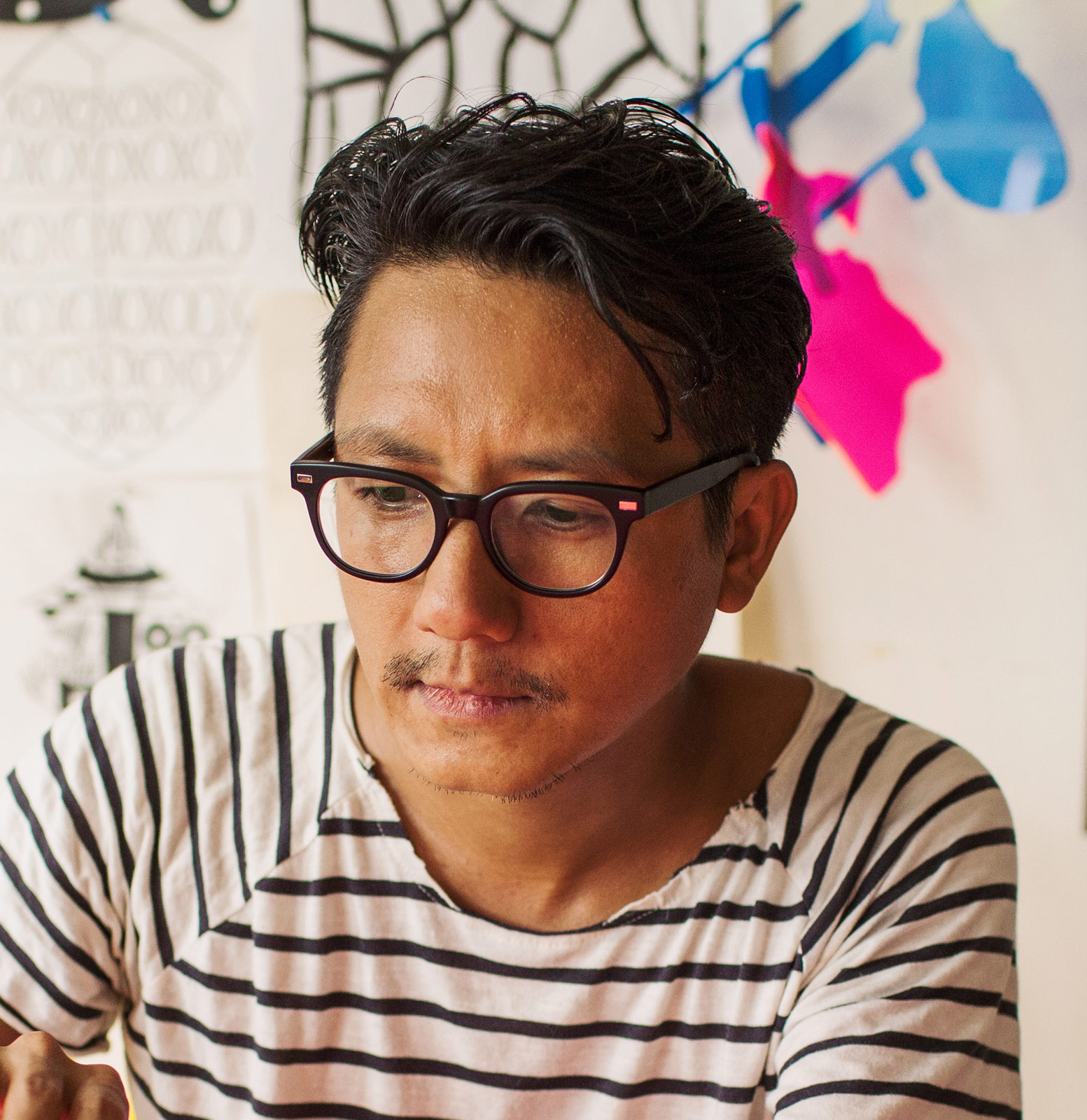 Can you tell us about your beginnings in the world of art?
Hong Kong is a densely populated urban jungle, generally a very safe place to live, therefore it provides an ideal playground for any kid growing up there. There was little discipline from my parents and so my brothers and I had to find creative ways to entertain ourselves —as a result we ran around the city causing havoc, loitering at arcade and read tons of manga, which I spent many hours imitating and copying on my school books. When it was time to think about what I wanted to do with my life, it wasn't a hard decision to go to art school and pursue a creative career.
You are a multi-disciplinary artist, director and designer. In which artistic discipline do you feel more comfortable?
I have ADHD (Attention Deficit Hyperactivity Disorder) and I have a hard time focusing on one thing for very long, I get bored and restless easily. I feel naturally drawn in many different things partly due to my condition but it’s also pushed me to being better at what I do. Every discipline brings along different challenges and require different part of your creative thinking to find the solution to it. I’m most excited when I’m trying new things.
Can you explain the making process of your artwork?
My painting process is pretty spontaneous in general. First, it involves some research, writing and sketching. Once I’ve figured out a general idea and composition, then I’ll start making the artwork. I’ll leave the detail pretty open and try to paint my way to the solution as I go along, sometimes it will go smoothly but most of the time it won’t. When I get frustrated and there’s zero fun left in me, then I know it’s time to put it aside for a while, either stare at it for a long time or move on to something new. That's why I usually have 3 or 4 things laying out in the studio so I can hop from one thing to another.

Your style has been defined as psychedelic. I think that it's also a little bit surreal.
Yes! I would define my work as pop, surrealist and psychedelic. Hong Kong is a melting pot of many cultural influences, being a British colony we imported much Japanese pop culture and English sensibilities while maintaining a heavily Chinese, Confucian tradition. So, yeah it is an interesting mixture of influences in my formative years. After I moved to America I became interested in music and its visual history, specifically fascinated with the 60s design and art that has had a lot of influence on my work among many other things.
Speaking about psychedelic. A lot of your artwork includes an element of chaos but it doesn't feel annoying or irritating to the spectator. How do you get this?
Hong Kong is a buzzing and visually chaotic and vibrant metropolis, the intensity of the city must have seeped into my subconscious mind. I try to let my process and ideas flow naturally and as a result the work can often reflect my state of mind at any given moment. I am a maximalist/purist at heart and although I think the work I create is often complex and potentially chaotic, there is a sense of internal structure and balance that ultimately unites the picture together. Visual art sometimes is no different from building a bridge, all the parts need to coexist in harmony, otherwise it will fall apart.
Would you say that you represent or contribute in any way in the pop culture? I’m saying this because we can find illustrations and motions of pop icons like Andy Warhol or Obama.
I don’t think I particularly represent pop culture. I simply wanted to make a gif about Warhol that is reflective of our time. Andy Warhol and his works about celebrity and fame are especially poignant in the selfie obsessed internet aged, he was lightyears ahead of his time.

It seems that music is very important to you. Some of your works are portraits of singers and bands like Michael Jackson, Jay-Z or Tame Impala. Even you worked with Gotye's doing a visual for their tour. Is music an essential thing when you're creating a painting?
I switch between music and podcasts. I‘ll listen to music when I need my brain to be focused on brainstorming, writing and idea driven work. I usually listen to something mellow when I need to focus. My wife and I share a studio together and we often listen to podcasts while we work.
As we know, you are from Hong Kong and you have your culture very present in your artwork. In fact, there's a series titled Na-mias where you represent the lifestyle of Hong Kong. This series is a little bit different from the rest of your work, right? If we compare this series with the other works we can appreciate that the colors and the dispositions of the forms aren't as chaotic.
My personal work mainly grapples with issues around identity, myth and displacement. Like many immigrants, I feel like I do not belong anywhere, having grown up between very different places, often I feel like a ghost stuck in the purgatory. The figures in my work often reference my favorite manga characters that became a mature adult, and serve as a sort of avatar often in transit or in a dream like utopia grappling between nostalgia from the past and uncertainties for the future. I’m a big fan of post- impressionist works, particularly Pierre Bonnard and the way he was able to capture domestic scenes with a dreamlike intimacy, this is something I find myself trying to create as well.
K-pop style and Manga seem very presents in your illustrations and animations.
Yeah, no doubt. Growing up reading manga obviously was a major influence on me. Moreover, I‘m interested in Asian pop culture in general, as an Asian man living in America I’m very aware of how sexuality and masculinity is represented in Asia, which is really in contrast with the American ideals. I am interested in the contradictory images of appeal. Androgynous is deemed more sexy in Asia while muscular is more appealing in the West.

We are living on a digital era and your work has adapted perfectly to it. The stop-motion animations that you make are one of the most popular things about your art. How did you decide to create them?
Back in 2003, I had an unique opportunity to work on a short film, I decided to try to do it in stop-motion / claymation. I never did any stop-motion before and somehow through trial and error I was able to finish the film. One thing lead to another and I became involved in directing many stop-motion jobs. Unlike painting or illustration, the process of stop-motion is very different from anything else, there’s a lot of planning, pre-production, etc. Every step has to be precise and clear before moving on to the next phase, it requires a total team effort to get it done which can be very exhausting, but also gratifying. If painting is like making a stir-fry, then stop motion is like baking a cake.
There's no doubt of the good vibes that your motions transmit to the people. The moves and the colors that you use are the essential things to transmit that, right?
I’m not sure if I’m intentionally trying to create work that appeals to everyone. I’ve always loved color and that has always played a strong role in my work. At the end of the day I know I have a good eye and if I’m satisfied with my process, I know someone else will like it too.
Looking at your work we can find a series entitled Summer of Love . It strikes me that this is very different from all the illustrations that you have done. You don't mix so many colors and you represent simple images. In one sentence: This series is not so chaotic like the others. Why did you decide to do it like that?
There are many contradictory principles that guide my interests and I‘m constantly trying to navigate and make sense of them. The Summer of Love series is a great example of that. I don’t believe in having a specific style although that works well for some artists, just not for me. I try to let the idea dictate how the artwork or animation should be executed. 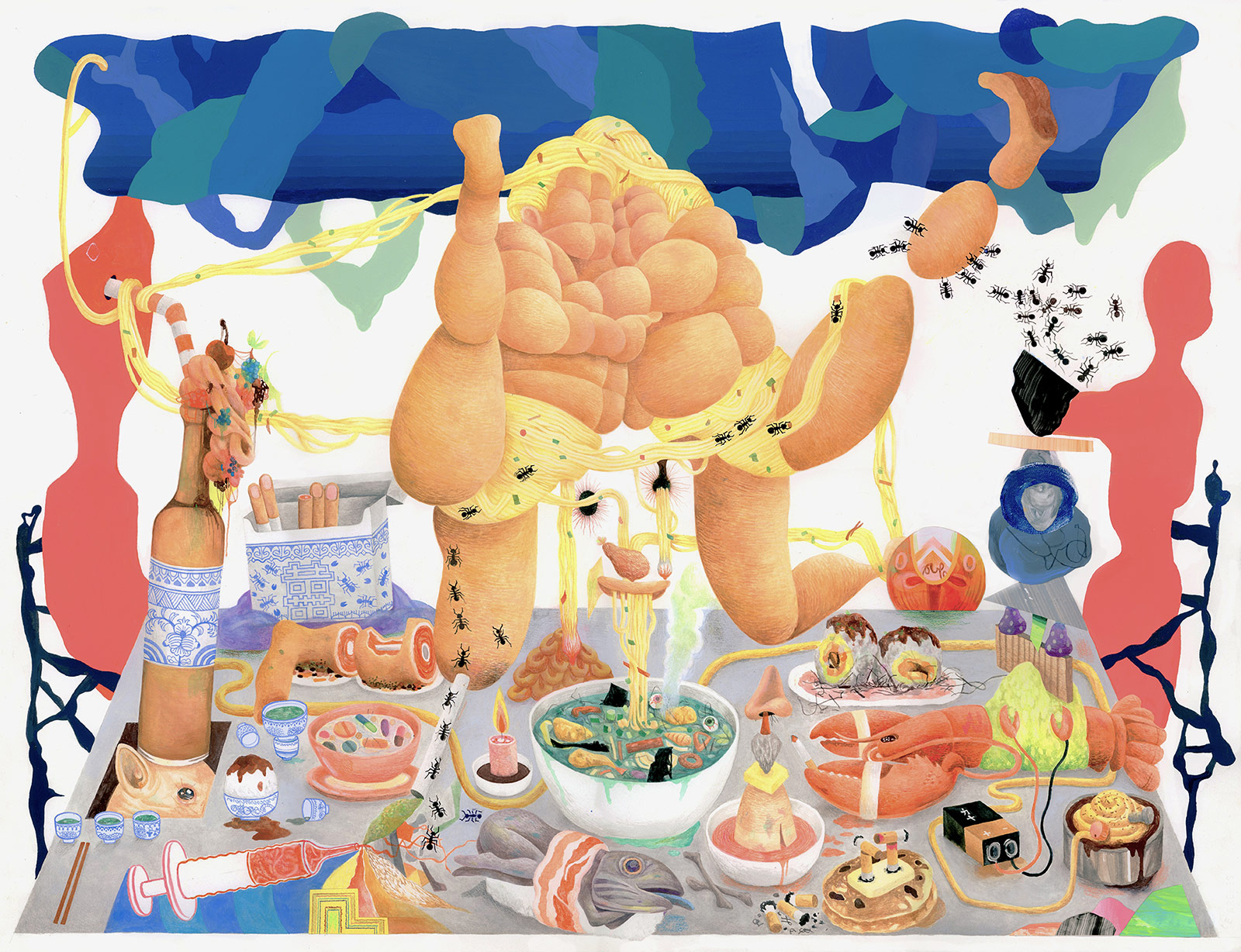 You have worked with a lot of popular brands. Could you explain the differences between working with a company and doing it for your personal collection?
Working with brands allows me to solve problems and sometimes play with new materials or methods that I would never imagine trying on my own accord. Personal works are much more emotionally driven, there’s lots of soul searching, intense self-reflecting. Both are very gratifying and I‘m truly blessed to have the opportunity to navigate between two very different yet inspiring practices.
In the last years you have participated in conferences where you talk about your artwork. What's the best advice that you would give to a new artist?
Don’t label yourself, don’t let others labels you. Be restless, don't be afraid to try new things even if you’re scared of failing. Failing is good. But the most important thing is work you ass off.
What would be your ideal project?
I definitely would like to spend more time with my personal works whether is painting or animation and eventually put together an exhibition. I’m also interested in creating an interactive experience. I was a gamer growing up and still am very interested in gaming. The industry has evolved ten folds for the past 5 years thanks to crowdsourcing and internet distribution. Some indie games have become interesting platforms for thought-provoking, smart ideas that no other medium can achieve. I would love to have the opportunity to make one. 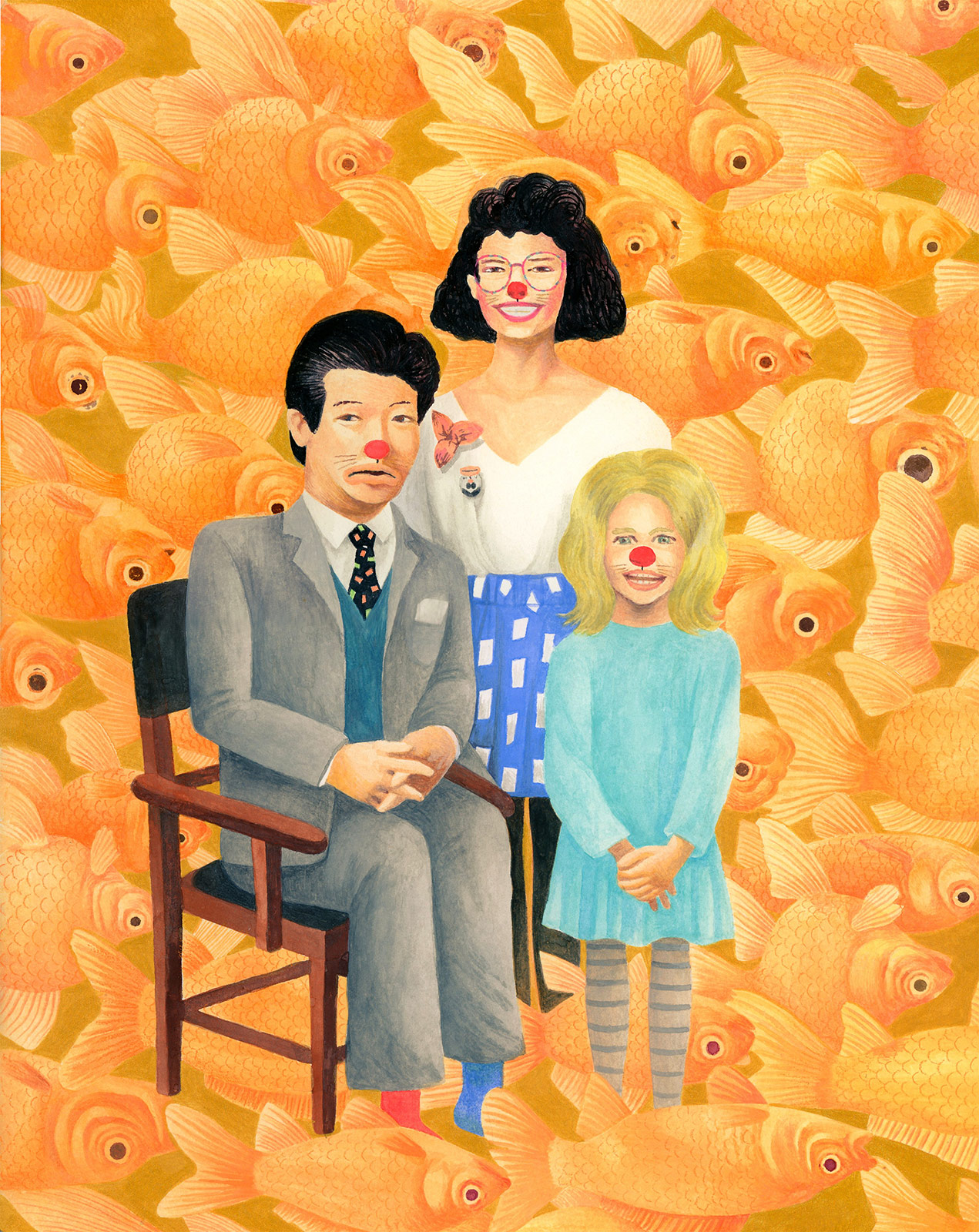