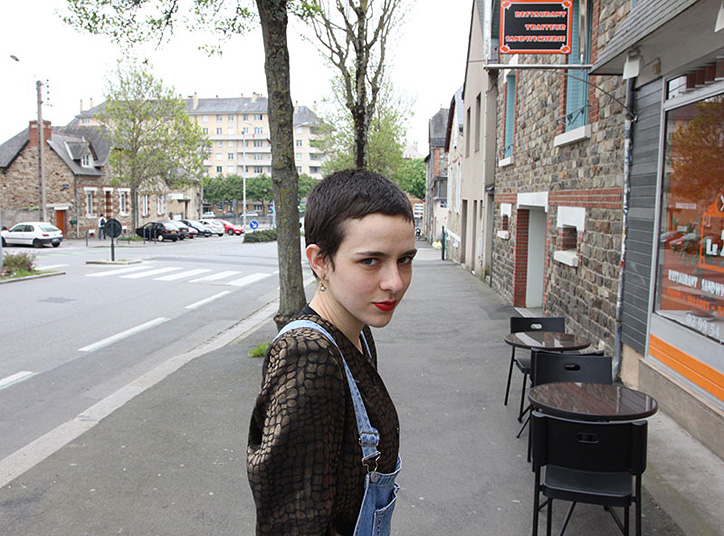 Young colombian artist Rossina Bossio does not hesitate to challenge boundaries with her work. Raised in a conservative environment, she questions trough her art the standard of beauty and femininity and the paradoxes of women stereotypes in today’s society. We talked with her about "The Holy Beauty Project", a series of artworks merging paintings, videos sound and performance and inspired by religion, fashion and art. The multi-media project juxtaposes catholic and contemporary imagery, masculine and feminine and questions taboos and stereotypes trough the seductive power of images.

By setting a parallelism between ancient and current icons, women’s identity and representation becomes a really complex and interesting issue, going far beyond our expectations.

Hi Rossina, tell us a little bit about you, where are you from and what is your background?

I was born and raised in Bogotá. I lived and breathed art in all of its forms since I was very young. I practiced dance, theatre and drawing since a very early age. I focused mainly on painting since 2006, but I’ve done works in other media such as video and drawing from time to time. I lived in France from 2008 until 2011; it was a beautiful and very significant experience and it has made me mature as an artist. I’m now back to my hometown, where I’m enjoying a very creative and peaceful life with my partner, in a nice home with a lovely garden, until I move on to my next destination.

What is your art about and what are your main inspirations?

On a personal level, at first it was about overcoming my past and finding myself. Today it’s more about embracing the imperfections in life and exploring the paradoxes of human condition. My main inspirations are my life experiences and the people and things that surround me. I’m currently obsessed with images of abandoned buildings, ravaged cities, constructions sites, landfill sites, car crashes, messy rooms, etc; there’s a lot of inspirational material in my city. I’m also inspired by art, design and fashion images that I find on magazines or the Internet, and the work of artists such as Lucian Freud, Jenny Saville, Yinka Shonibare and Matthew Barney.

In 2010 you started working on the multimedia project “The Holy Beauty Project”, where did the idea of producing something going beyond paintings and drawings originate?

My ambition was to give life to my paintings in order to make their message even louder and more vivid. I wanted to transform them into sound and movement, to paint through sound and movement. There is a pictorial side to these other ways of artistic expression and I wanted to explore that.

This project also involves dance and performance, is there any particular reason to this choice?

After several years doing only two-dimensional work, I started missing my artistic roots, dance and music. But my intention wasn’t to abandon painting. Hence I felt the need to bring them together. The idea of movement is very important to me also, literally and metaphorically speaking: I see movement as change, for instance the movement of beliefs and values that once were considered true and now aren’t. Physical and intellectual movement sets you free…

You are the protagonist of "The Holy Beauty Project". Was the concept for the project born from personal experiences or is it more like a general reflection about womankind in general?

Both. I was brought up in a very religious and conservative environment, within the boundaries of an overly stiff view of women and, in general, humankind. Since religion and issues around femininity had been a deep part of my life, I saw the performance in the video as a kind of liberation for myself. Indeed, the issues explored in The Holy Beauty Project are complex and universal: it is about women’s identity and representation, plus the impact of advertising and religious iconography in our behaviour and the way we conceive our bodies.

Women, religion and seduction are the main themes in "The Holy Beauty Project". What are you questioning through the trilogy of videos?

If I had to sum it up in one sentence, I would say that I’m questioning our inherent and sometimes pathological need to create idols in order to shape a sense of identity. Each era has its own gods and idols and values have changed throughout the centuries. The message of the Catholic church has been replaced by another one. Today we’re no longer persuaded to be chaste and submissive as the saints and the virgins, we’re encouraged to follow the ideals of our time and thrive to be beautiful, seductive and wealthy: this is the formula to become a ‘unique’ person. The promise of individuality accompanying our current icons is just another facade that yields new mass behaviours. It’s the paradox of “Mass individuality”, so characteristic of the XXI century.

The idea of beauty and morality are representative of women in a religious discourse, although their power of seduction has often been seen as dangerous. Do you think there are constrictions in society which make women act differently than if they were completely free?

Yes, I think there are. But I don’t think there’s such a thing as being completely free. There are always constrictions, either from society or your own self.

"The Holy Beauty Project" also questions boundaries between masculine and feminine. The protagonist of "THBP Vol. III" seem to have both feminine and masculine features, do you have any particular thought about that?

Gender systems and traditional conceptions of sexuality are also questioned in this project. In all societies, women and men are pressured to conform to a certain set of rules and role behaviours. The thing is, women are usually the most disadvantaged of the two genders. Also, women have been more present in images that sell products and ideals; they are the symbol of beauty and seduction and that is why they’re the protagonists of THBP. However, men are not exempt from strict and sometimes absurd ideals around their manhood. This is also a subject examined in the project, through figures that are not completely female but rather androgynous.

We find in your videos both performance and costumes, have you ever thought about making a piece for theatre?

Yes! I’ve thought about it a lot. I’d love to do that in the near future.

Tell us about your upcoming projects and where will they be.

Last year I started a new multi-disciplinary project involving painting, installation and video-performance, entitled Extraña (Stranger). In Spanish this word can be used as an adjective (strange), a verb (to miss or to surprise) or a noun (female stranger) and it serves to describe the atmosphere of my new works. Again, I want to examine the interaction between static and moving images, but I’m no longer dealing with the subjects of femininity and religion: since the day I came back to my country I want to explore chaos and precariousness. I’m focusing on the relationship of human beings with the space they inhabit and the objects they possess. I’m painting architecture and space, which is something that I had rarely done before. This time I’m going to be working with a group of professional dancers from a contemporary dance crew. For the moment I’m in the painting stage and we’ll start composing the music for the videos soon. I’m very excited! 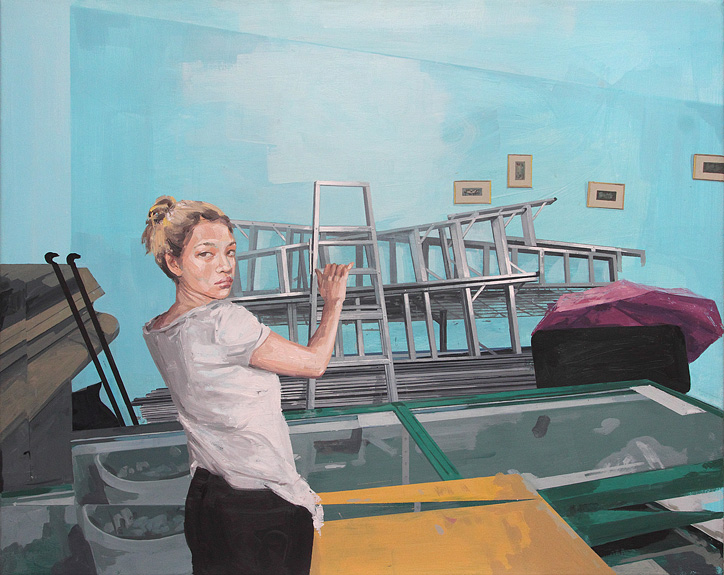 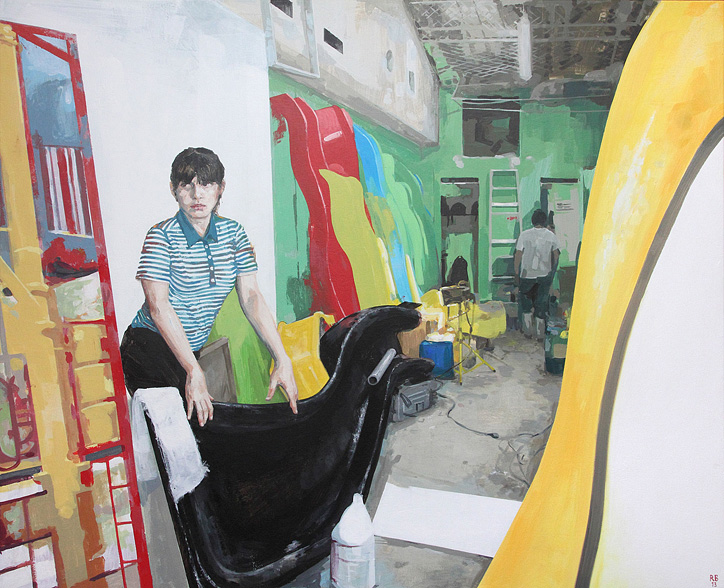 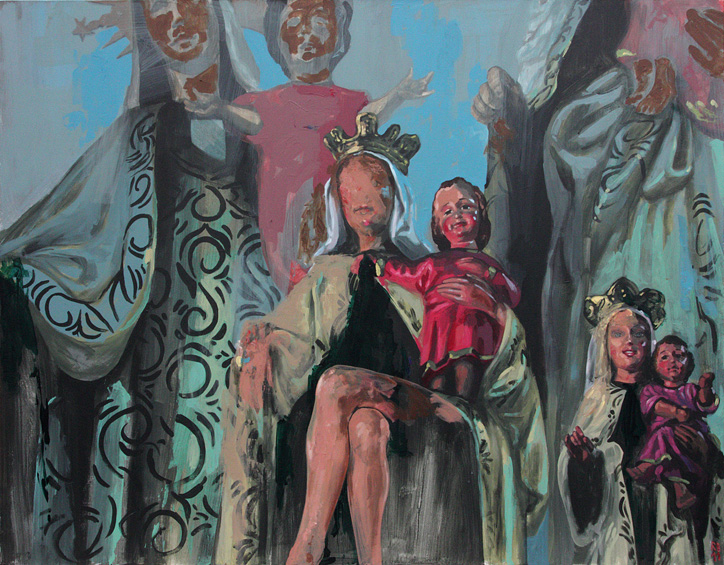 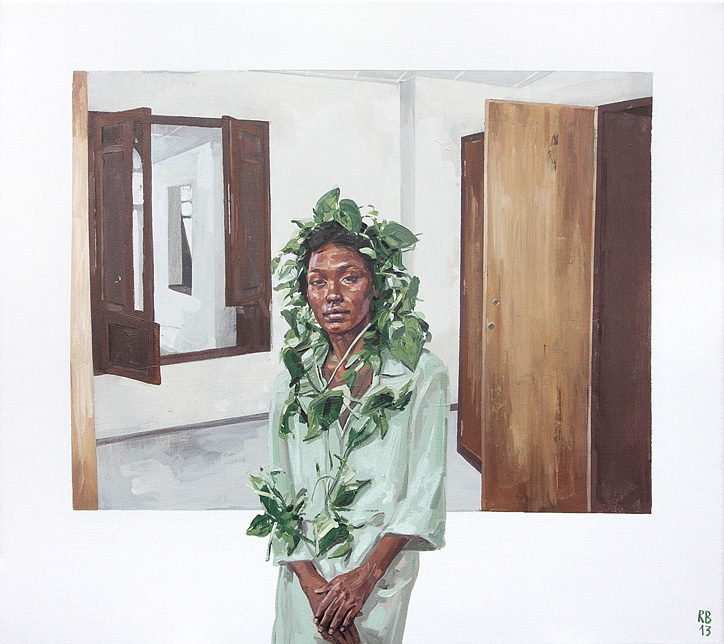 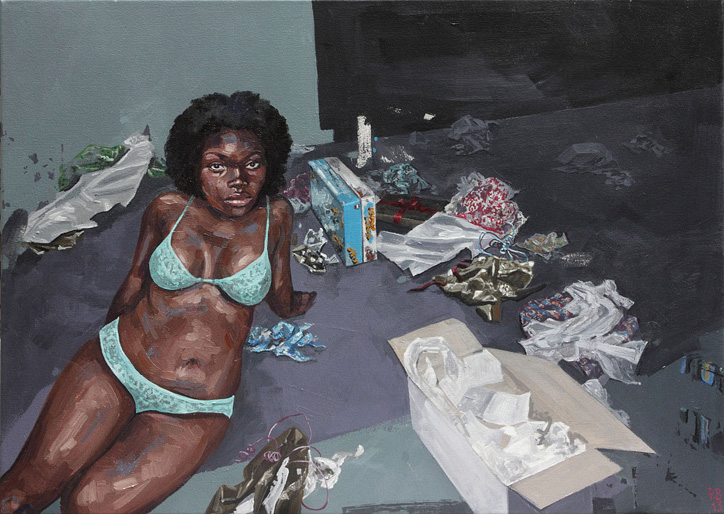 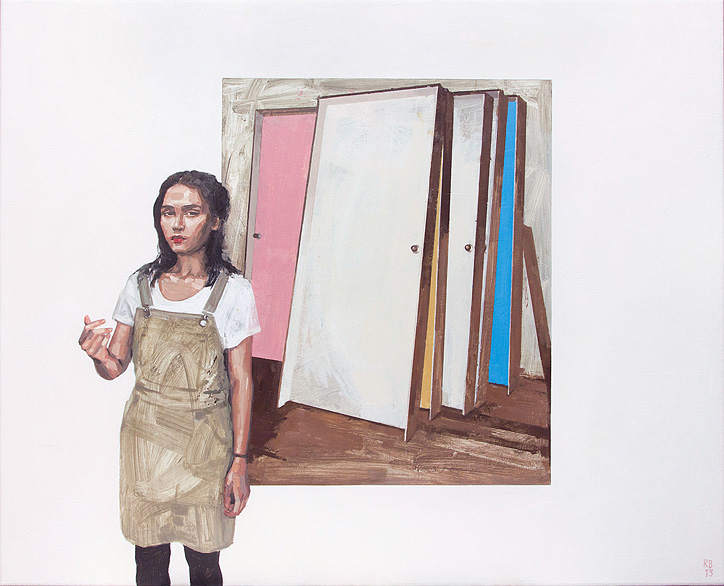 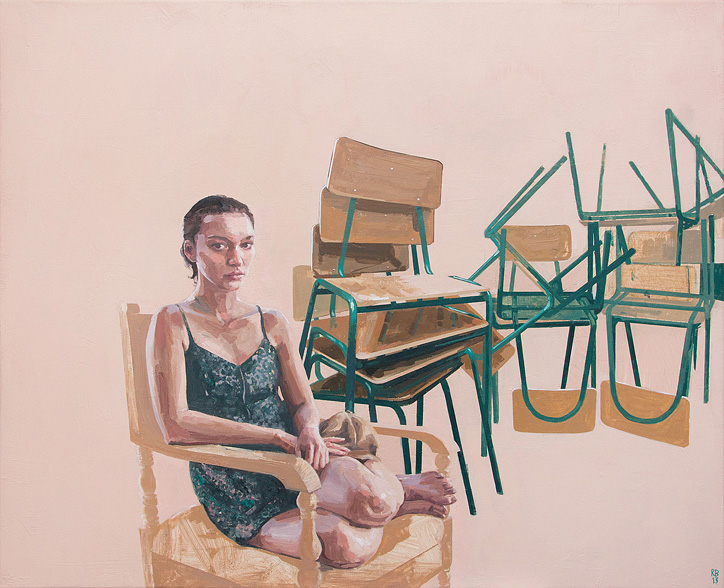 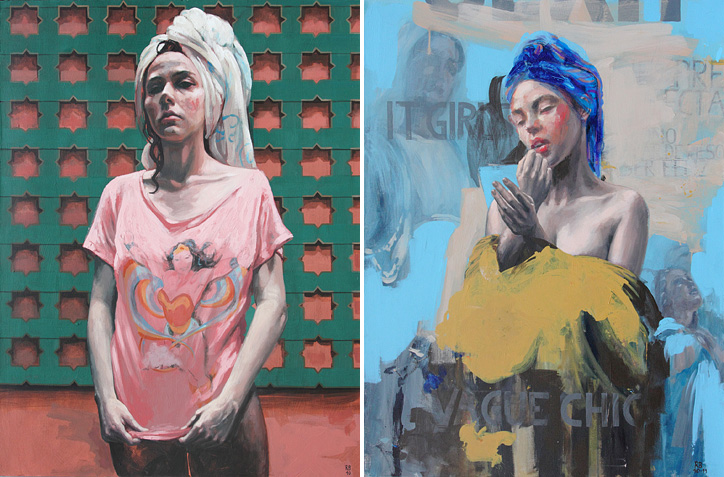