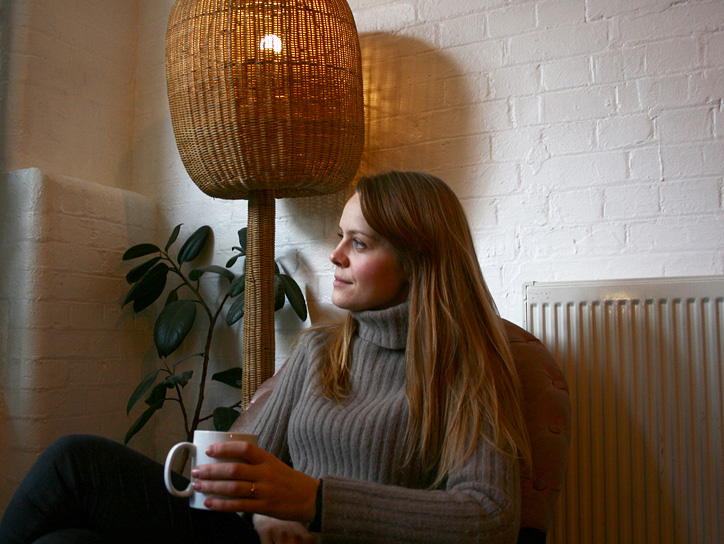 Unconventional and mesmerizing, Rose Robson pushes taxidermy to an art form where she engineers and constructs birds into abstracted yet intricate states. Her work constitutes of a vulnerability and awareness as her process emphasizes a metamorphism of life and death.

What sort of influences drew you towards sculpture and taxidermy? Did it go hand in hand or have you always been inclined towards taxidermy?

I always drew, and when I was doing my art foundation at Central Saint Martins my drawing developed into a kind of graphomania style of drawing. All I seemed to draw was birds with human faces, likening them to us. I had a desire to make these drawings 3D and started to stuff them with cotton wool and stitch them up. After that my mind was made up and drawing was simply not enough for me.
A show that has continued to stay with me was The Age of the Marvellous exhibition held in 2009 at The Crypt in London. It was a show inspired by the Wunderkammer or Cabinet of Curiosities. I felt like my work fitted in there and taxidermy felt like a natural progression for me.

Before you started getting involved with taxidermy, did you experiment on smaller birds or animals?

While I was a student I used to go to the butchers in Borough Market and get pheasants, pigeons, partridges and mallards to practice skinning at home. They were sold for their meat so I would usually make a game pie that evening and have a feast with friends. But funnily enough, the last thing you feel like eating is pheasant if you've been de-fleshing it all day, the smell stays with you and it doesn't taste the same. Everyone else seemed to enjoy it though.

Your pieces are quite reminiscent of Alexander McQueens early collections and works when he started up as a fashion designer. He drew a lot of inspiration from birds in the way they moved and he too studied at Central Saint Martins. Do you think your environment and studying at St Martins has had a direct impact on your final aesthetic and why birds?

Being the first year to graduate from the new Central Saint Martins building in Kings Cross put a lot of pressure on me and my contemporaries. The building was so big and invasive to us that we felt inclined to fill the space and try not to get swallowed up by it, we all made the biggest work we've ever made and have always felt the need to stand out.
I have always been inspired by the otherness of birds, how they are alike but unlike us and our relationship with non human animals. I find it incredible that throughout history bird’s flight has inspired the human imagination so that birds are embedded in our religions folklore, music and arts.

Has working with death and dead birds made you more consciously aware as a human being or do you feel desensitized by it?

I have found working with death very challenging and anxiety inducing at times, especially when I first started doing taxidermy. Skinning the body of a dead animal is a very intense and compelling reality. While the body is still attached to the skin it appears alike but unlike us, everything is in the same place. As the body is slowly cut away from the skin the body transforms into meat or waste. This physical detachment and removal of the animal body allows you to mentally detach from the dead animal. Although I find the skinning process the most difficult aspect of my practice it is also the most important part and I wouldn't want to become desensitized by death.

Can you give me a brief introduction about how you go about your process from beginning to end?

My work is process led so I always start my day by skinning a bird and let the ideas evolve naturally. I lay the bird on its back and make the first incision down the breast bone, I open up both sides of the body using my fingers and a scalpel. I work the skin down the back cutting through muscles and bones. I cut past the neck up to the skull, and then I detach the body. Once I have laboriously removed all of the flesh and fat from the skin, the bird is washed in soapy water. When the skin is dry it starts to become something other, I start to look at the forms it can take and examine the colors of the feathers. The next part of the process is drawing and making the abstract form that the skin will encompass.

Do you feel ethically challenged in any way by your work?

I work ethically and seasonally, working with birds that are shot for their meat or because they are pests at certain times of the year. My only concern is when others don't fully understand what I do and think I am going out with a shot gun every morning.

Do you see yourself channelling and expanding your craft towards a bigger scale and perhaps other animals?

I have spent the past year experimenting with deer furs, stretching skins over abstract forms to see where it will take me. I try to push myself in other directions when I hit an artist block. Even if it doesn't work at the time, the experimentation always feeds into my work in other ways.

How do you want people to portray your work and what you do?

Unlike the role of a traditional taxidermist, who want to hide their authorship to preclude the fact that you are actually dealing with a dead animal. I want the viewer to be aware of the dead animal in front of them, to think about the taxidermy process and to see my hand in the making.
Using a diverse combination of bird skins and wings, reshaping them beyond a literal depiction towards a more expressive end allows the viewer to see the transformation of life and death.

What do you plan on pursuing next in your work?

I am currently making a series of large swarm-like sculptural pieces towards my first solo show at West Dean in Sussex on the 9th of May 2015. West Dean is famous for its iconic gardens and I will be exhibiting to coincide with the opening of West Dean House to the public. 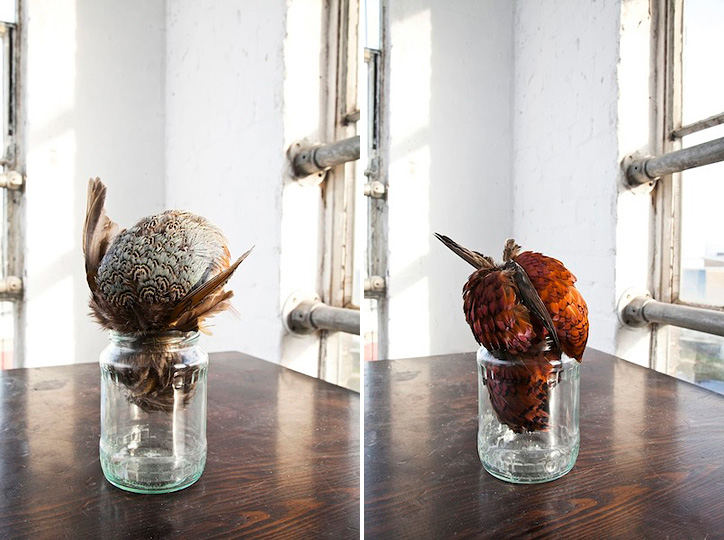 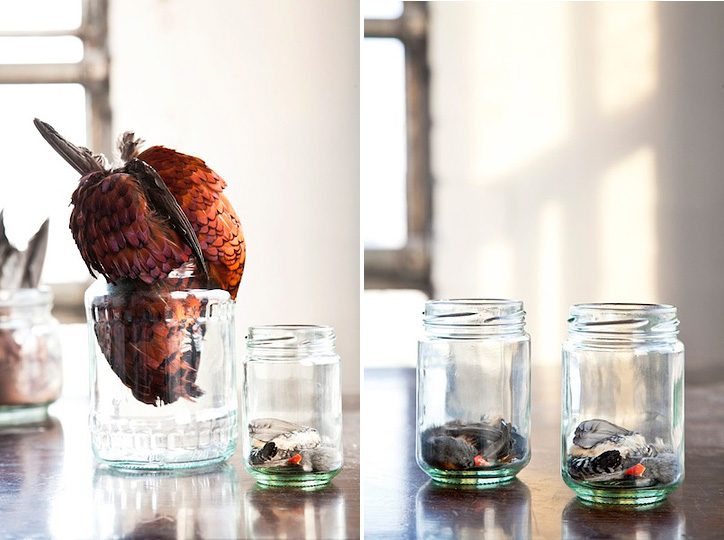 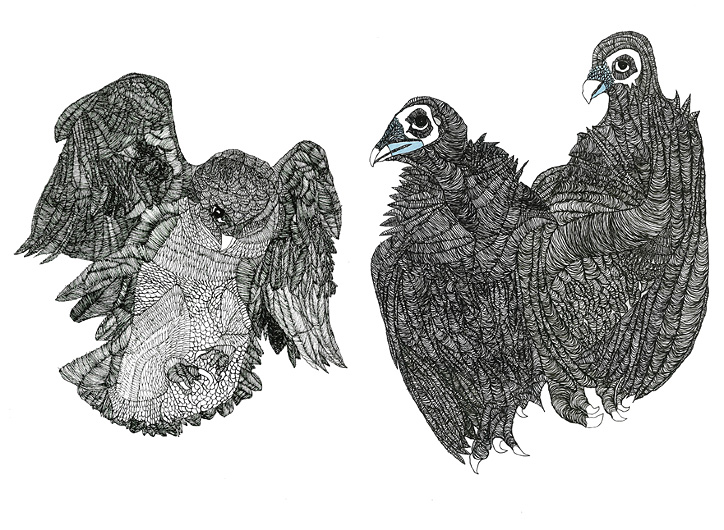 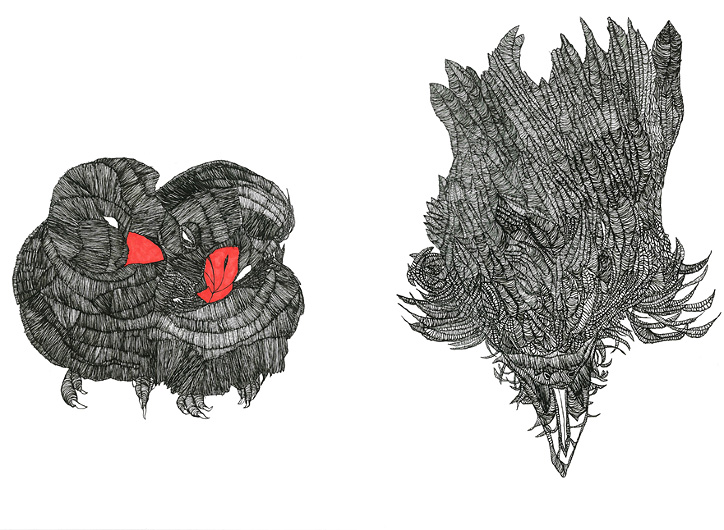