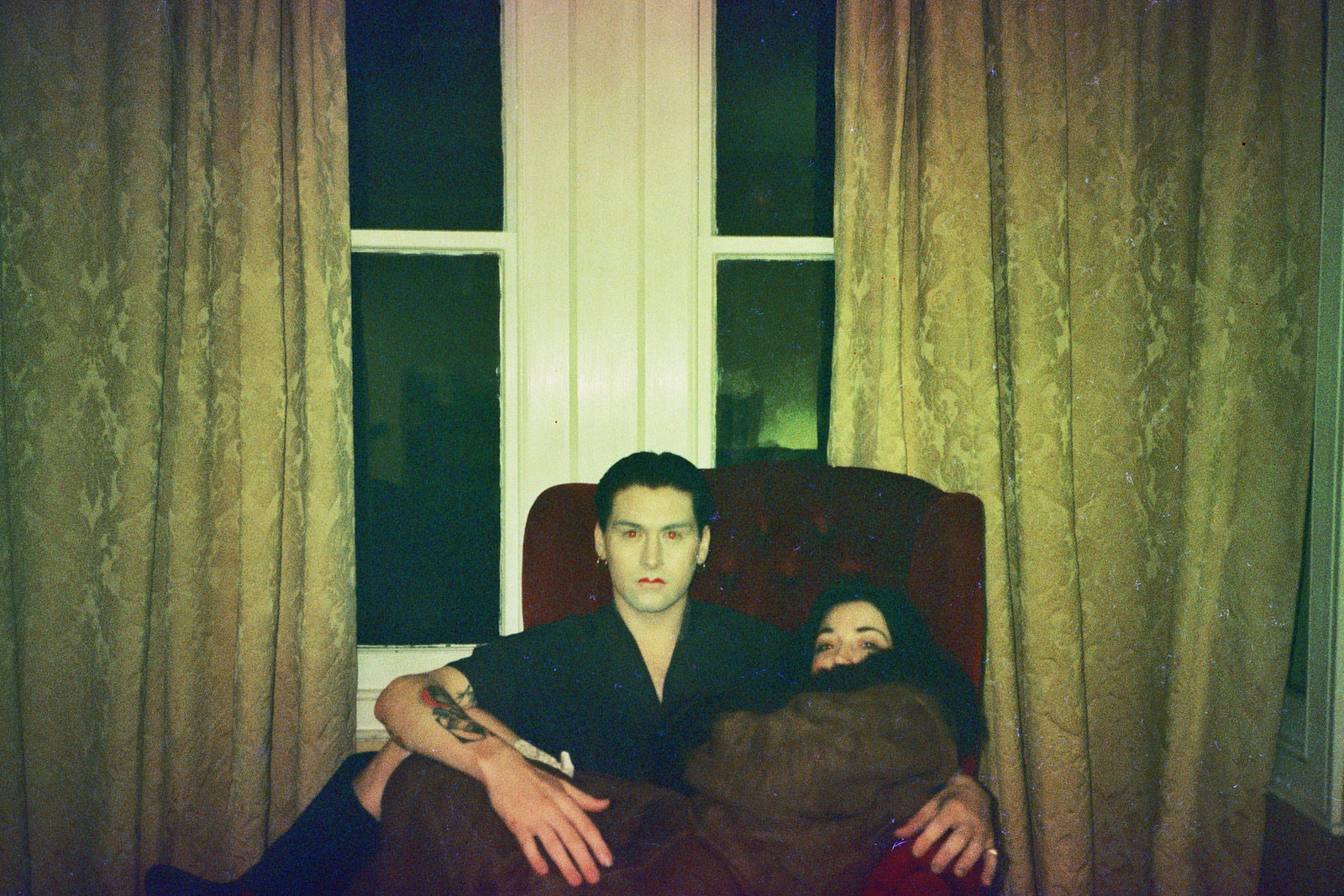 Dream-pop cut with experimental electronics is a good rundown of Robbie & Mona’s debut LP. The couple-duet released their debut album, EW, last Friday on January 29th, that introduces us to two musicians joined at the hip – or should that be tied by the leash.
Robbie & Mona are not their real names. They go by Will Carkeet and Ellie Gray, until stepping on the stage in their pop monikers, named after Ellie’s old dogs. Crafting sounds much more tuneful than any dog I’ve heard, Robbie & Mona are a duo to watch out for. The biggest compliment I can pay them are their similarities to one of my favourite albums, Tender Buttons by Broadcast. Pairing Ellie’s serene, spacious vocals with warped production, their resemblance to Trish Keenan and company is clear. Nonetheless, whilst Broadcast emerged in the wake of ‘90s kraut-rockers, Robbie & Mona have a 21st century, lo-fi quality to them, suitable for a time when the world has hit a glitch.

Although most of the album wasn’t recorded in their (lo-fi) bedroom, the Bristol-based duo evoke these same cosy sensations on tracks like lead single, Wallpaper. Spacey keys couple a feel-good synth line as the pair of dogs take your hand for a dance. Other tunes like Picking Up Ruby offer a more surreal, distorted trip whilst the cadence of Venice’s chorus produces something of an ear worm. Recent single Queen Celine – with accompanying music video – is a ravenous experience that makes sure you won’t know where you are at all times; no wonder it was written around a character losing her marbles. Throughout the album, there is this balancing act between vast spaciousness and fuzzed-out electronics. The combination is not shoehorned in but flows as a cohesive whole. Clocking in at around 25 minutes from a 9-track stretch, EW is definitely worth your time of day.

Bands can only hope to have their music disseminated like Catholic missionaries. Having toured with a man who knows all about cult fandom, Alex G, as part of Will and Ellie’s seven-person band Pet Shimmers, one might wonder why they are changing their focus to this duet-project at all given that emo-indie outfit are themselves on the rise. For them, this LP has been a long-time in the making and allows an intimacy a band cannot supply. Importantly, Robbie & Mona offer something genuinely alternative to the current stream of dream-pop, and for that we can be grateful they took that leap. Amen.

Here, the pair introduce themselves to METAL over chats about movies, singing to Celine Dion and the roots of their dog-inspired name.
You started performing together September 2019, why have you decided to release now?
Ellie: We had a few problems releasing tracks when the project first started, and we hadn’t found the right fit in terms of who we wanted to work with
Will: It was very annoying not being able to share what we were doing as we were doing it, but then Spinny Nights asked us to a night of theirs and through that, we got to know them really well and it all went from there.
Coronavirus has been a wild ride for us all, especially the music scene. Have you been playing any small shows at all between lockdowns?
Will: We played a show for So Young magazine in London with Blue Bendy which was a giggle. It felt good to be out in the world.
Ellie: It’s tricky with shows. Part of you wants to keep the music industry going and share things, but another part questions whether it’s right or safe. 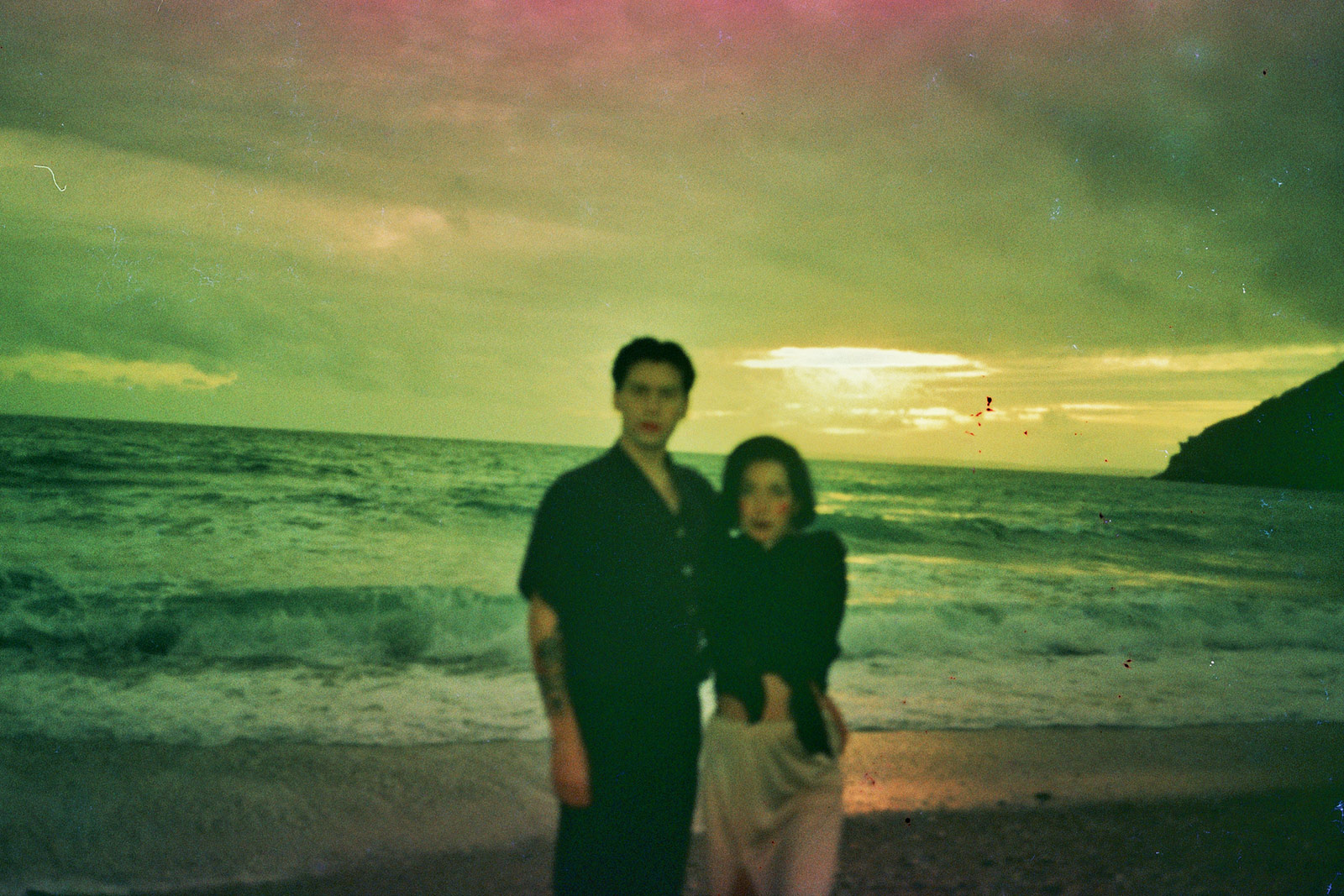 I’m told the names Robbie & Mona came from your dogs, Ellie. What made them the obvious choice for the band name?
Ellie: We were in Will’s old cave studio on Kings Square in Stokes Croft, Bristol (UK) for about the third meeting of us making music together, just drinking into the late hours of a Thursday night and recording lots of howls and weird mouth sounds. I think Will started barking into the microphone and it sort of struck me – it haunted me – how much he sounded like Robbie my old, dead dog – in the same specific pitch (laughs). So, I told him about Robbie & Mona, my dogs and I think it went from there. Will was like ‘those should be our names’, not thinking it really would be – but then it just was.
Any connection to the album artwork on all fours? What was the thinking behind this very powerful cover?
Will: Ellie had exhibited some photography in Zurich alongside the Pet Shimmers tour and linked up with Frederica, the photographer, through that. We really love the feel of her imagery and felt something about that image fitted perfectly.
Ellie: But yeah, well spotted – no one else has made the reference to the artwork being related to our dog alter-egos! 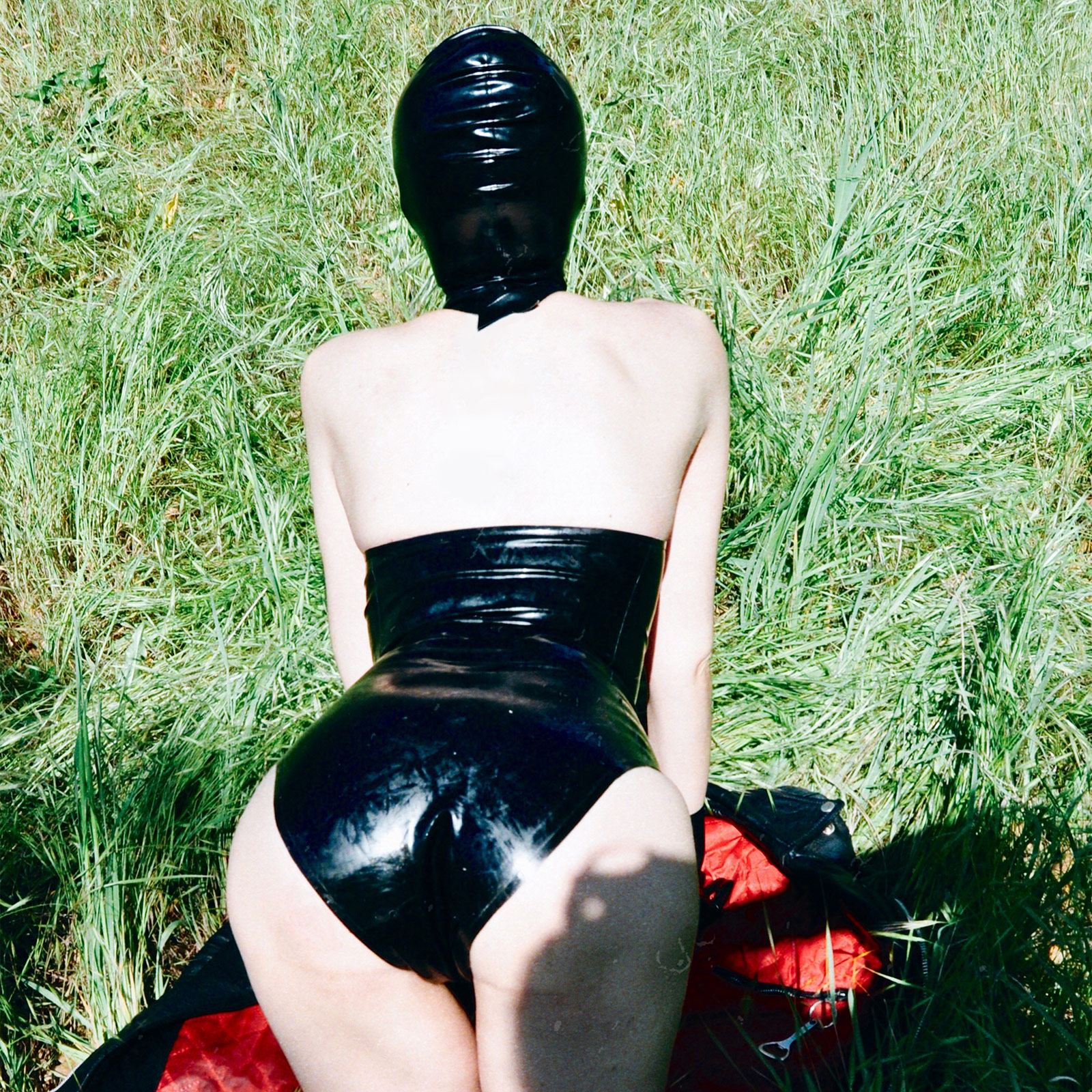 From listening to the lyrics on this album there often seems to be a narrative thread, maybe from a particular character’s view like on Queen Celine or Crocodile Pears. Do these characters/narratives come first when you are writing a song, or is it all intertwined?
Will: Ellie has a million notebooks with stories and writing which she usually draws from…
Ellie: I’ll hear something Will’s done, and it may abstractly relate to something I remember writing at an earlier point, and it kind of starts from there – getting adapted along the way. Sometimes though I’ll hear something Will’s made, and it will stir my imagination, so I’ll just automatically start writing something. When it’s like that it sort of feels like the story already existed and I’ve opened a portal that let it fall in me.
It was interesting to read that a lot of the inspiration comes from films or non-musical influences. What films were central inspirations for this album?
Ellie: Daisies by Věra Chytilová’, an old surrealist 1960’s Czech film. It follows two lead sisters who live in this moving chaotic collage world where they break rules, indulge in and trick high society. [Daisies].
Will: Blue Velvet by David Lynch as well. It was kind of our reference point to begin with, we watched it together early on and love the Lynchian beauty of it all!
Ellie: And Paris Texas by Wim Wenders is like a meditation and full of amazing colours you want to taste and lick.
Pet Shimmers obviously consists of seven people whereas here it’s just the two of you. Though, another key difference is that here you are creating music with your romantic partner. 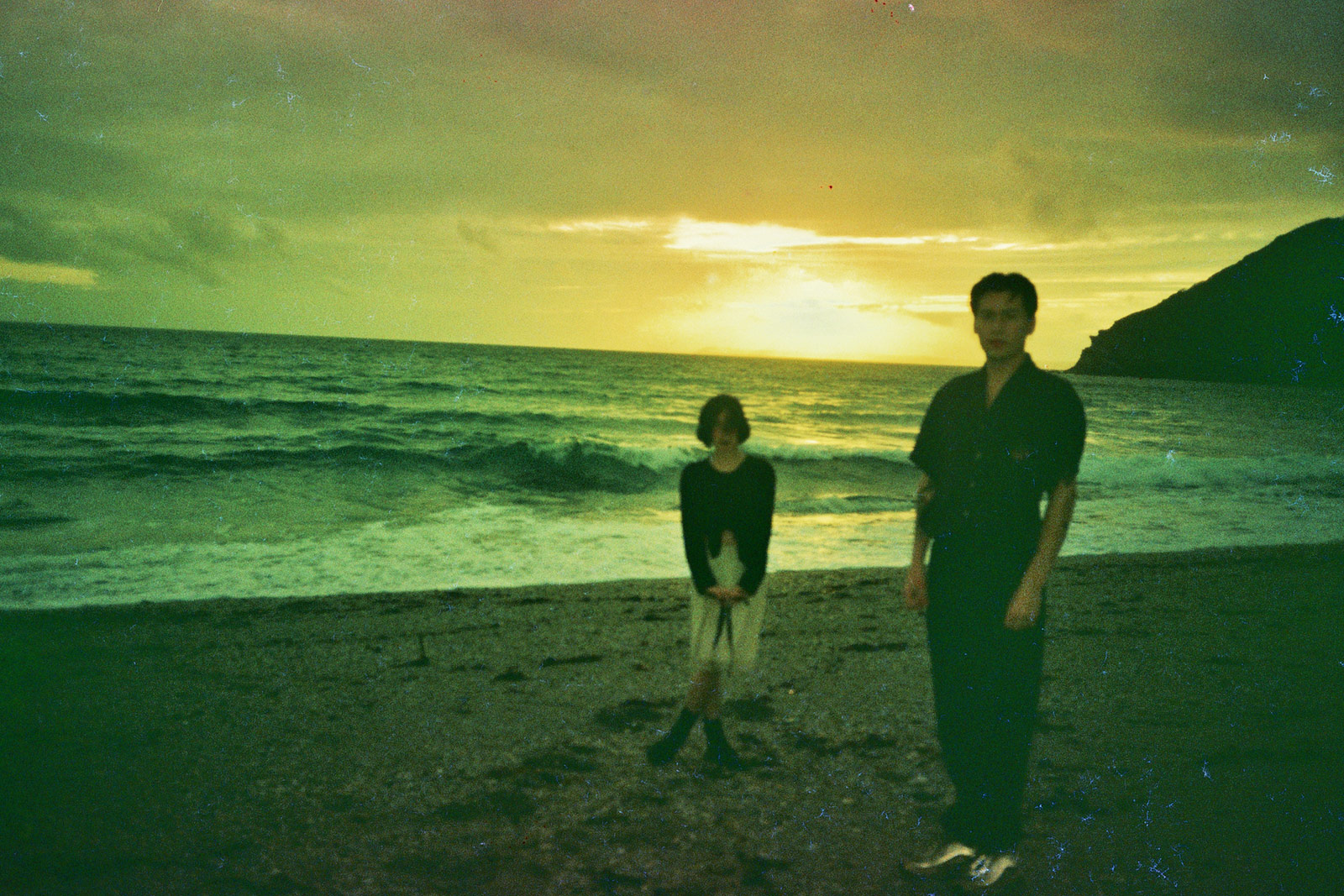 What is it like for both of you to work together versus off-duty?
Will: The music we make is just an extension of our relationship really, it all melds into one. Our music is our baby! We don’t think about having children we think about making albums.
Ellie: The making is part of the romance. It’s all sort of one world. To feel authentically creative, I need to know the person I’m working with really well which being in a relationship brings. We are lucky. There are some heated squabbles over songs every now and again though.
There are a lot of instruments on the record, what were your musical upbringings like?
Ellie: I sang, I remember going to singing lessons and singing Celine Dion My heart will go on. I learnt the flute at school but got really dizzy. I was deaf up until I was about four years old, but I had an operation to fix that. From then on, apparently, I always sang.
Will: My parents weren’t musical at all but my mum says she’d drive around in her Citroen 2CV with me in the back singing along to her Cure tape. My nana on the other hand was a classically trained pianist and I would always sit at her beautiful grand piano and smash the keys. They do say it skips a generation. At age seven, I would get dragged to the house of a strange man with very few teeth to be taught guitar lessons every week. I hated it because I wanted to play rock songs and shred, but ‘no-teeth man’ wouldn’t let me play an electric guitar.
What’s next for Robbie & Mona?
Will: We’ve already made the next album, with more duets. Watch this space.