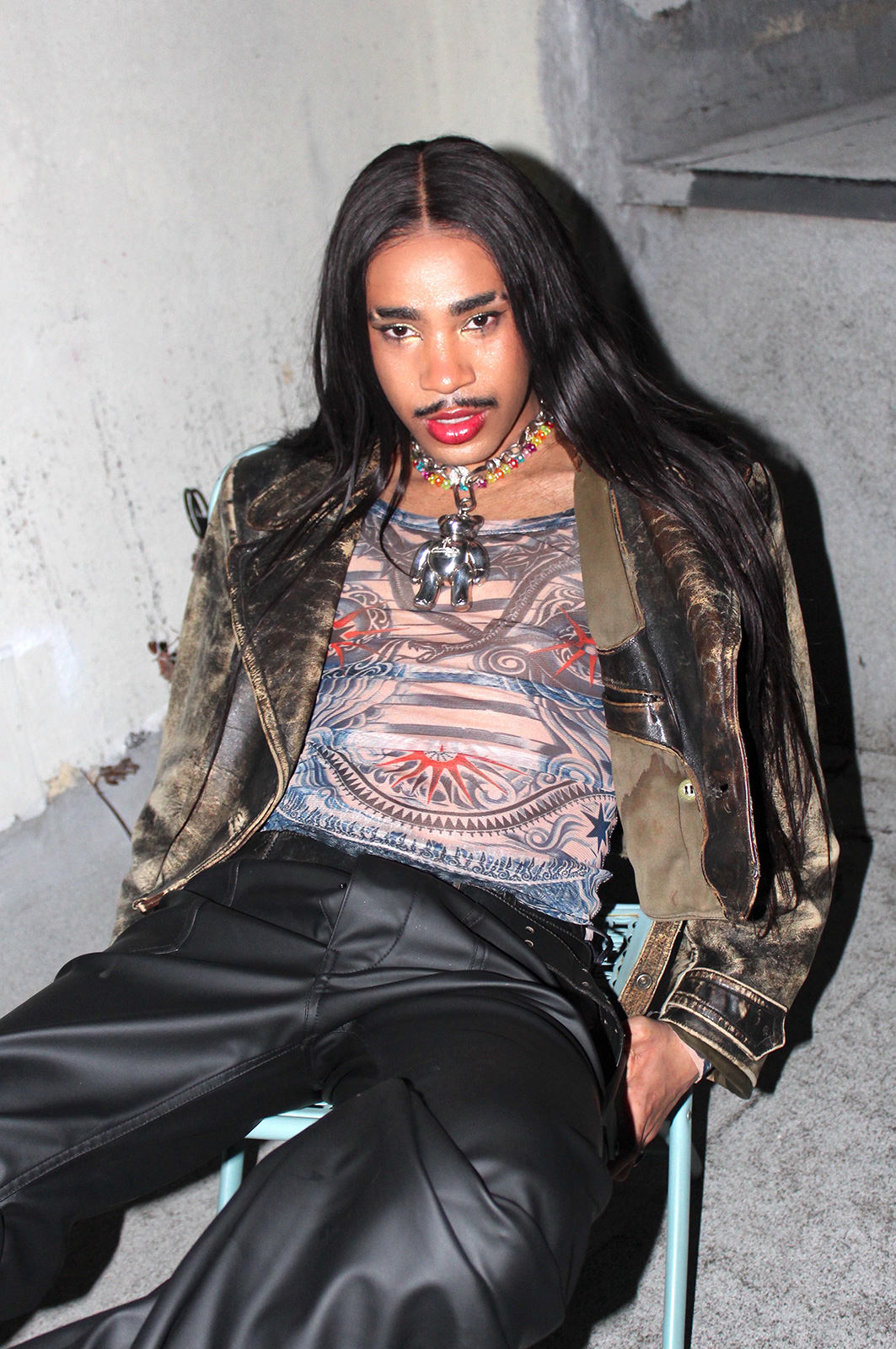 River Moon, also known by her Instagram handle and occasional DJ moniker, Saint Deepthroat, has had a busy several years making music fit for the world’s hottest clubs. Known by many for her membership on the hugely popular, and wildly prolific, meme account Patiasfantasyworld, Moon has been making music for far longer than many know. Her memes are often the most chaotic and explicit the page has to offer, and her music sometimes features similarly bold celebrations of sexuality. Yet, her work cannot be defined as just one thing.
River Moon’s 2020 album, Martyr, demonstrated a far more contemplative, atmospheric sound than much of her previous work, and was born out of a darker period of the artist’s life; she credits the album as saving her life. Now, she is ready to begin a new chapter, musically and otherwise. The past couple of years have provided collaborations with artists like LSDXOXO, brands like No Sesso and a slew of vivacious live performances. Some of her most viral songs seem to have followed the logic of a meme post; an idea comes to her and an hour later a song is born, often playful and touched with her distinctive sense of humor. Her work is grounded in a heritage of Black electronic music pioneers, and she is the self-declared Rave Princess. Now, she has moved across the world, and has undertaken a new slate of projects.

Leaving her hometown of Cape Twon (South Africa), Moon recently moved to Los Angeles, where she quickly immersed herself, and is already working on a new album. Moving her production out of a bedroom and into a studio has allowed her a much broader set of collaborative opportunities. She tells us that River’s Revenge will arrive early next year and is different from anything she has released thus far; its alignment is “rapper sun, raver moon, rockstar rising.” In this interview, River Moon talks about her relationship to social media, the direction her music is taking, where she has ended up in the world and navigating the world’s club spaces.

You have moved between New York and Cape Town a bit. Where have you ended up for the time being?
Somehow, I found myself in LA. I was thrown into the deep end of Hollywood. My first couple of nights I was at some old Hollywood star’s house and everything felt so surreal. I was like get me the fuck out of here!
Your Twitter bio says, “no pronouns. don’t refer to me.” As someone who has such a broad digital footprint, and appears virtually so much, how do you navigate self-presentation and moments where people misrepresent you?
In the past, I would be really bothered by being perceived in a way that I’m not, but now I have an understanding that you really can’t change how other people see you. All you can do is just be you and be secure in who you are. I love being me because it took years of not loving who I was. I love who I am now, and I will make sure to never lose that love. I can do the online trolls because I have a very good sense of humour about that, so I love clapping back in a funny way just to make them look stupid… However, when it’s hate coming from your own community, it really hurts me sometimes. I don’t even be doing anything to anyone and people will make up all crazy types of things about you just because you’re on and poppin' and they’re not.
Many people were introduced to your work through your membership on @patiasfantasyworld. Can you tell us a bit about what constitutes a River Moon post?
Everyone always tells me I have the most chaotic posts on the page. The chef emoji. I think I just love posting things that I hear in my family a lot. A big part of my family is super conservative and every x-phobic under the sun, but I still have to deal with them… and to deal with it, I laugh at the crazy bigoted shit they say sometimes, because if I don’t laugh, I’m gonna cry or fight. So sometimes when I post crazy memes posted by old school uncles and aunties, people think I’m agreeing with it. No. I’m just laughing because me, and so many other people like me, have heard these things come from people around us. So, it’s funny in that way. The craziest thing I ever posted was a photoshopped butthole on Timmy Turner’s dad. I think that was our most liked post to date before it got deleted.
The patiasfantasyworld’s admin team has been seemingly everywhere over the past couple of years. What have these creative partnerships and friendships meant for you as you have developed as an artist?
We’ve all just been doing our own thing individually. Patia’s been doing work with fashion brands like Marc Jacobs and Mugler, Laina’s in medical school right now and I’m doing music full-time and touring the world. Most people don’t know that I’ve been doing music way before I joined patiasfantasyworld. People think it’s calculated posts, but we truly treat this page as some Finsta where we can just be ghetto and free. This has nothing to do with my creativity. I just love laughing and making people laugh.
Social media can be so connective, especially at times of isolation. Do you ever need to log off?
Never. I’m what they call ‘chronically online’ and I’m very shameless about it. I just always have something to say. I’m always ranting, posting my hot takes and random thoughts, tweeting some funny shit – shitposting. Even when I’m dealing with stress, social media is my stress relief. I’m always finding a way to entertain myself on it.
Are you in the rave gives quite the list of names to know. How did you come up with this collection? Is this a dream rave invite list for you?
This song was just born out of boredom. I literally tweeted “what if I made a track that just shouted out all my friends” and I opened Ableton, made a quick little beat in 15 minutes and recorded the entire song in one take and posted it the next day. It was inspired by the AceMo and John FM track called Where They At?, a certified club classic. Those songs where I have a stupid idea and execute it in under an hour always become my biggest songs. Kundalina Jolie was made in 30 minutes and born from a voice note that my friend Mistervacation (who runs patiasfantasyworld with me) sent me about her thesis on ketamine treatments for mood disorders. I was like “what if i turn this into a song,” and a couple of days later, it was coming out of club speakers in places I’ve never been or heard of in my life. Turkmenistan? Kyiv?
Can you tell me a bit about your work with No Sesso for their couture collection? Pia and Autumn are two artists so committed to radical inclusivity through their fashion, are there any other designers whose work you are excited about at the moment?
I love Pia and Autumn. No Sesso was one of the first people to show me love in the fashion world. Those are my day ones. Pia actually sends me memes every day. She’s the meme queen, quiet as its kept.
I identify with No Sesso because I believe that fashion should be for everybody, and gender expression in fashion should be played with more. Right now, I love Area. I just did a campaign with them. Heaven by Marc Jacobs always shows me love. Telfar, Hood By Air always, Shayne Oliver is my goat, Luar, I love Martine Rose, Maximilian, Ludovic De Saint Sernin…obviously Rick Owens. I hate to admit it, but I really love fashion. 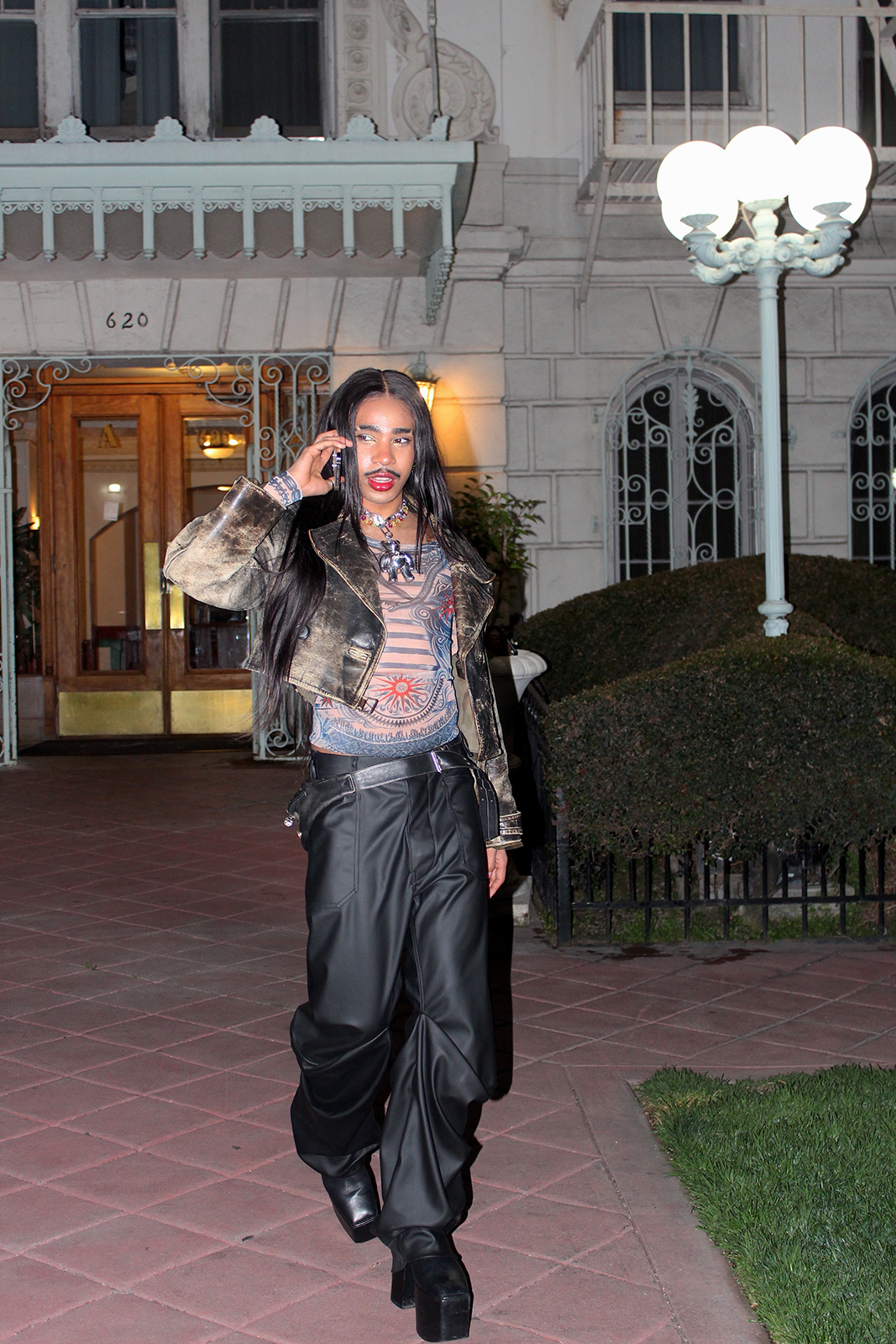 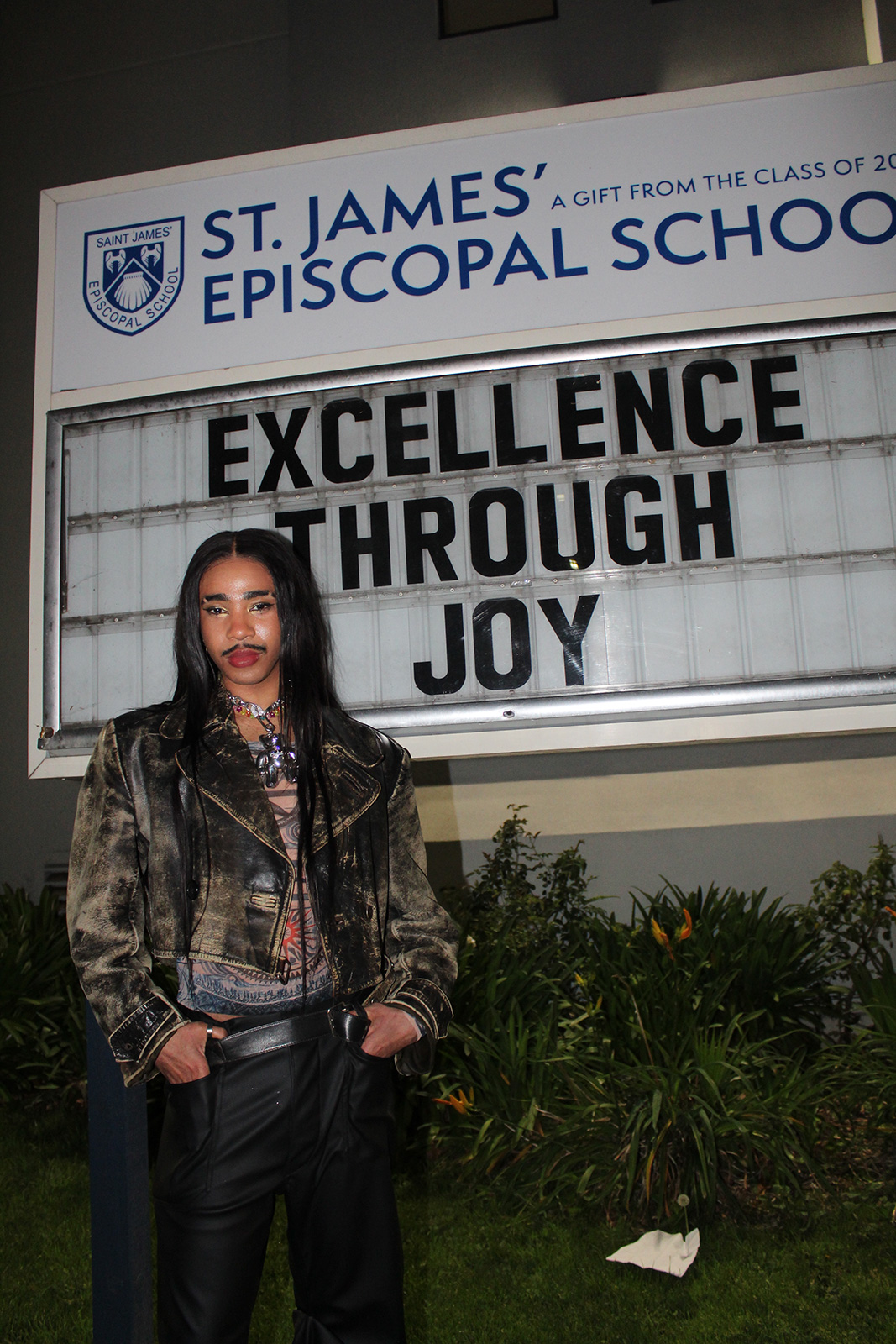