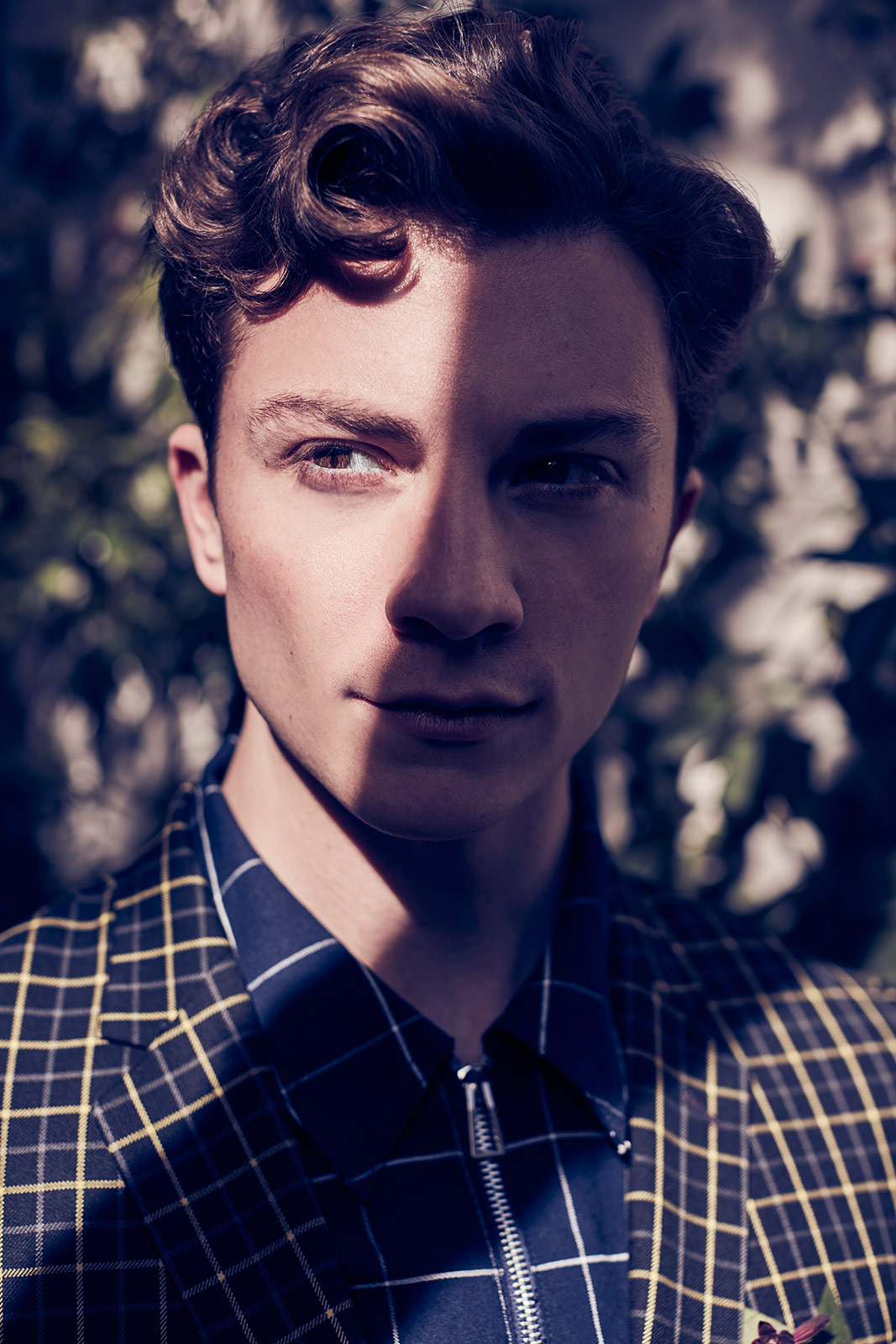 In times when streaming platforms are revolutionizing the film industry, signing up for Netflix is definitely a success. The platform has helped many young actors and actresses take their careers off. On February 26th, a new series called I Am Not Okay With This will be released, starring Richard Ellis. Will it be his time now?
Based in Los Angeles, Richard is a music lover who plays the guitar, the piano, the drums and even the bass. As he tells us, “creative expression was always a part of my DNA”. So, it wasn’t a surprise when he decided to enter into the artistic atmosphere of acting, not before going through some modelling experience and fashion photoshoots. Some of his first roles in TV series like Veronica Mars (2019) or Truth Be Told (2019) have paved his way to this new opportunity: playing Brad Lewis in I Am Not Okay With This.

Produced by Shawn Levy (Stranger Things) and directed by Jonathan Entwistle (The End of the F***Ing World), I Am Not Okay With This is Netflix’s upcoming must-see series. This supernatural coming-of-age show is based on the graphic novel by Charles Forsman, in which we get to know the secrets of a 15-year-old girl called Sydney – how she falls in love with her best friend, Dina, the bizarreness of her father’s death and some painful telekinesis powers that she is trying to control. Now, all the characters of the story will be embodied by a cast that includes Sophia Lillis, Wyatt Oleff, Kathleen Perkins and, of course, Richard.

Go through this interview where we talk with the up-and-coming actor about his passion for cinema and acting, fashion, and his role as Brad Lewis in this new original Netflix series. It was an interesting chat, we just hope that he is okay with this.

Before talking about Richard Ellis, the actor, let’s go through some quick Q&A to get to know Richard Ellis, the spectator… Series or movies?
Definitely movies.
Favourite movie/series?
My top five movies would be Goodfellas, The Wolf of Wall Street, Seven, Eternal Sunshine of the Spotless Mind and The Departed. When it comes to series, it would be Haunting of Hill House, Dexter, Mindhunter, Game of Thrones, and Fleabag.
Favourite film genre?
Drama.
An actor/actress who inspires you?
Leonardo DiCaprio. I can watch anything he does.
A Netflix recommendation?
Haunting of Hill House. That show is a masterpiece! 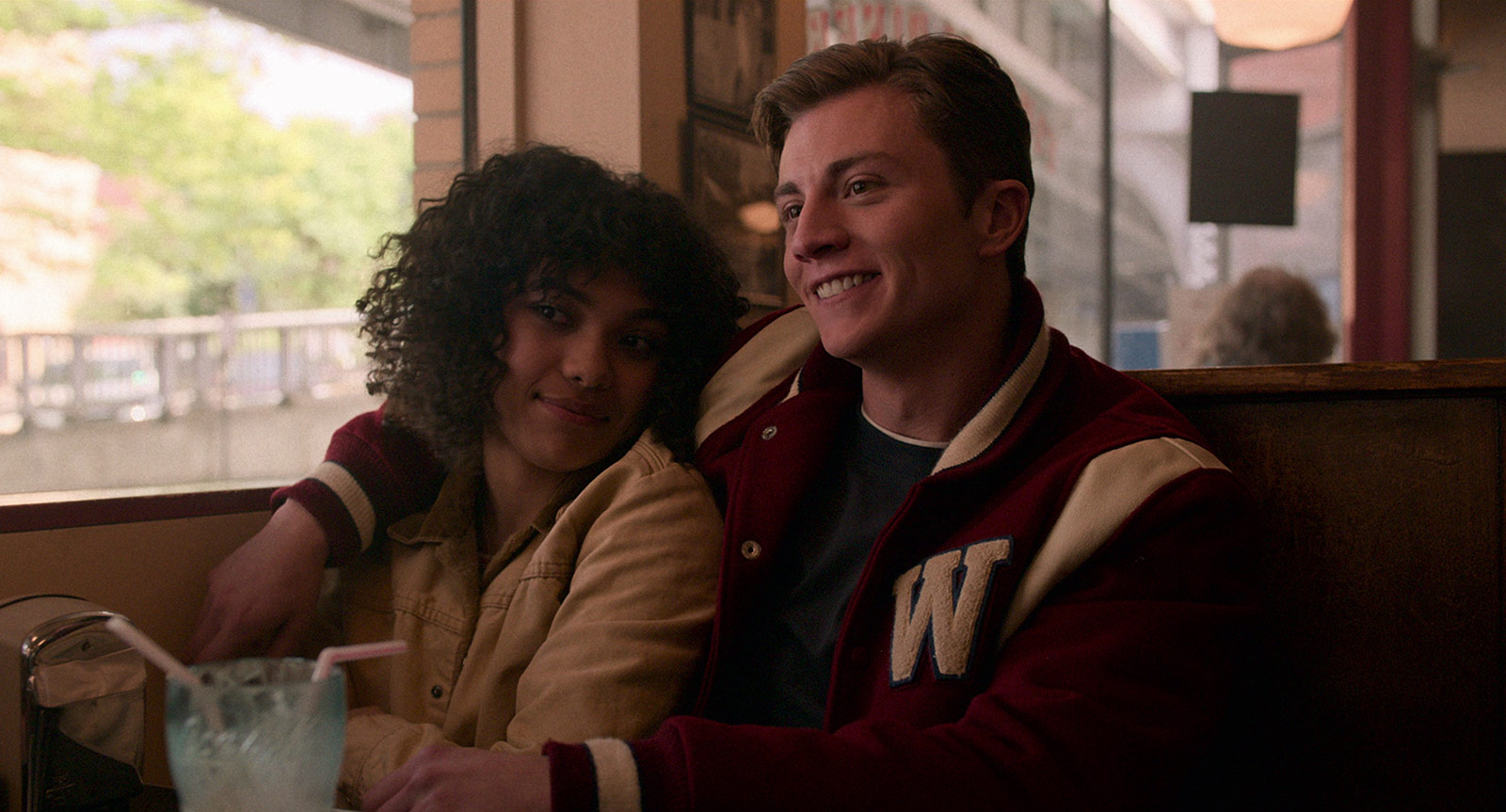 Your career is just taking off, and this role in I Am Not Okay With This could be life-changing. Who knows, it’s Netflix. So, maybe you should start getting used to the lifestyle of red carpets, premieres, events… What is the best advice you have received to keep your head on your shoulders?
To keep around that people who will keep your feet on the ground. It is so easy to get wrapped up in all the bright lights and fancy things, but keeping a circle of people around you that you can trust wholeheartedly is crucial. I have a great group of family and friends.
A solid and long-lasting career is built up by patience, hard work and discipline. But also passion and love for what you do. What do you like the most about acting? What makes this job so special to you?
What isn’t there to love? It is so creatively satisfying. It allows you to explore areas of your psyche that you don’t normally get to examine. I truly do believe that it makes you a more well-rounded person. And it’s special to me because it was always something I dreamed about, so to get to do it on a professional level is the most surreal and amazing thing I’ve ever experienced.
Do you feel like acting is an innate talent? Of course, you must work on it, but I’m talking about the eternal question: is an artist born or made? How was it for you?
I believe it is innate. I grew up playing four instruments and singing, so creative expression was always a part of my DNA. This seemed like a natural progression for me. But like anything, if you do put the work in, you will reap the benefits. It depends on the person, I think.
On I Am Not Okay With This, you will be playing Brad Lewis. How is this teenage boy? Could you give us some hints about the character?
He is an absolute narcissist. He is the epitome of the guy who peaked in high school. Brad doesn’t really have any redeeming qualities, but that is what makes him who he is. His point of view is the only one that matters to him and that is materialized throughout the show. 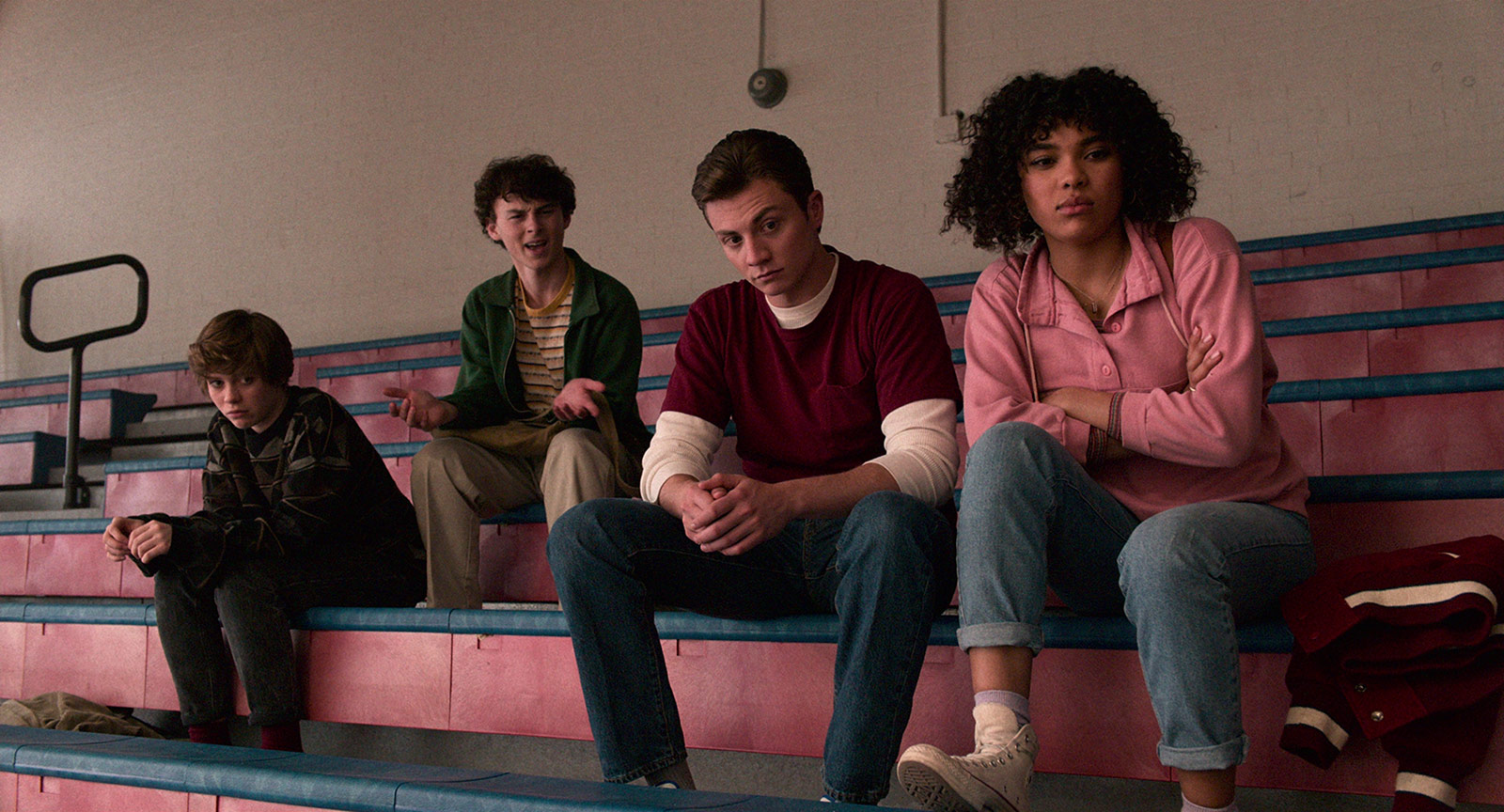 As a curiosity, how similar is he to you? Do you feel related to him in any way?
Not similar at all. He is a culmination of all of the different ‘Brad’s’ that I have met in my life.
Most actors say that they will always carry a part of each role with them. What do you think you will take from Brad? What can you learn from him? Or what shouldn’t you learn from him?
What I learned was to conduct myself in the exact opposite manners as him. He’s incredibly selfish and misogynistic, so basically, whatever Brad does… don’t do it!
I guess you had to go back to your high school time to play this character. How did you prepare it? What was it like to become him?
It was really fun for me to be in that headspace again. High school has a way of feeling like the most important time of your life while you’re in it, so to be able to approach every situation with such high stakes was a great time. The whole shoot had an undercurrent of nostalgia for me, so I really enjoyed it.
When filming and being in set with so many people, you must have shared many moments and created real bonds. Is there any you remember especially? Any anecdote from the set of ​I Am Not Okay With This?
It is hard to pick just one. Every single member of the cast and crew was incredible and I think that is going to come across when people watch the show. There was one day that we were all in the same scene and we had the absolute best time. We had become so friendly off set that when it came to being in a scene together, we were able to riff off of one another. 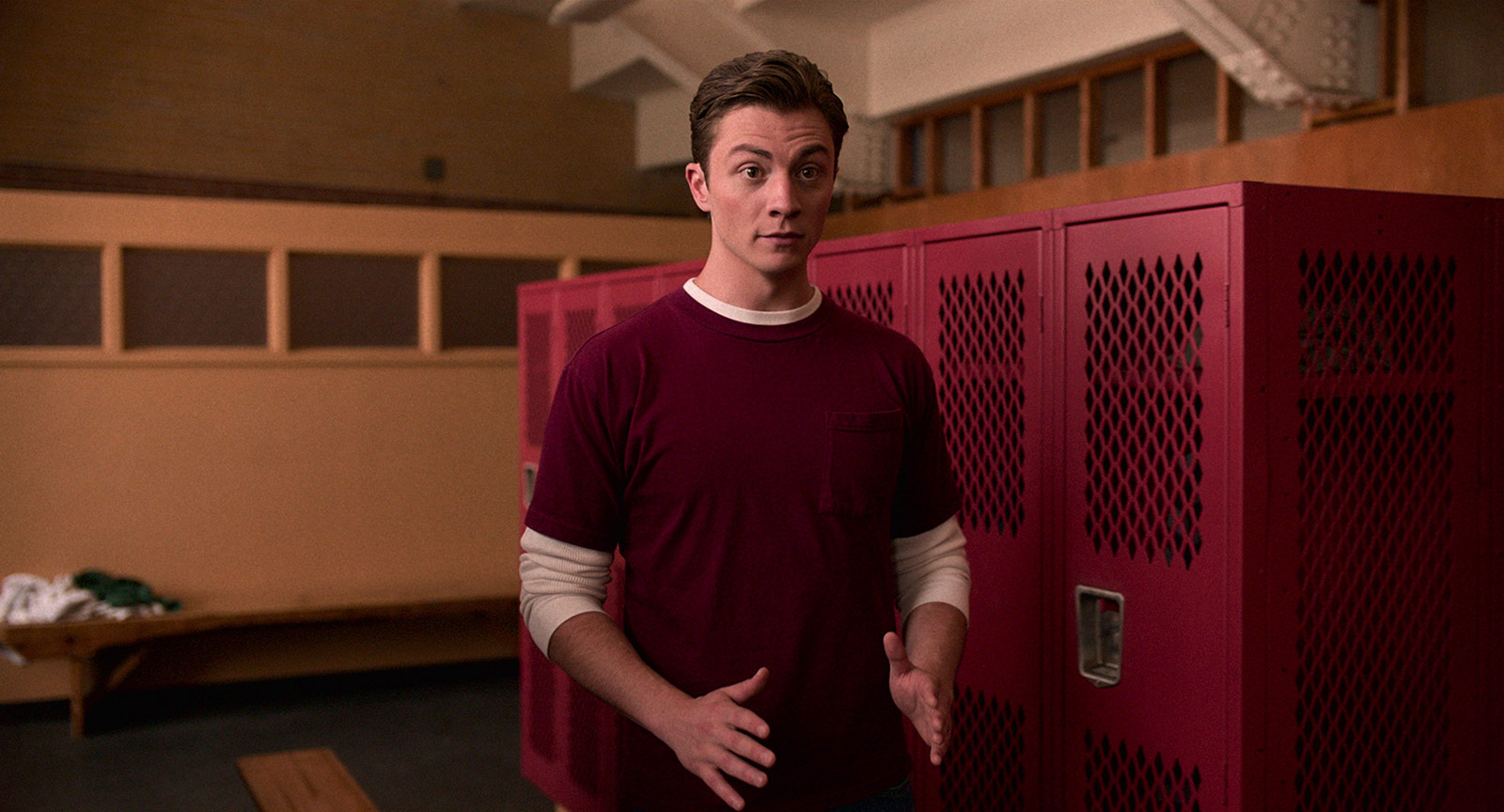 Thanks to the first-look images revealed by Netflix, we have been able to see a kind of ‘80s vibe and aesthetic, like the one we already saw in Stranger Things – also produced by Shawn Levy. How would you define your own aesthetic or your style? Do you have a signature look?
Simplicity is the name of the game for me. You will usually find me in a plain t-shirt and jeans. I’m not necessarily the flashiest dresser.
You have also worked as a model doing some fashion photoshoots, right? How do you feel in front of the camera? Do you need to create a character as well, or is it better to just be yourself?
Each shoot is different. I used to be quite stiff during shoots. I’d be really stoic and it didn’t look like I was having as much fun. I wouldn’t say that I ‘created a character’, but each shoot brings out a different part of my own personality. It’s fun and interesting to be able to show personality through a picture because a picture only captures a moment. To be able to show the different aspects of yourself through that medium is quite the challenge.
Finally, if you could choose any role to play from any film, which would it be? What is your dream character?
As I said before, anything that Leonardo DiCaprio is in. Doing something iconic like Titanic or The Wolf of Wall Street would be a dream come true. Characters that get to experience every emotion on the spectrum while being a part of an incredible story. That’s the dream. 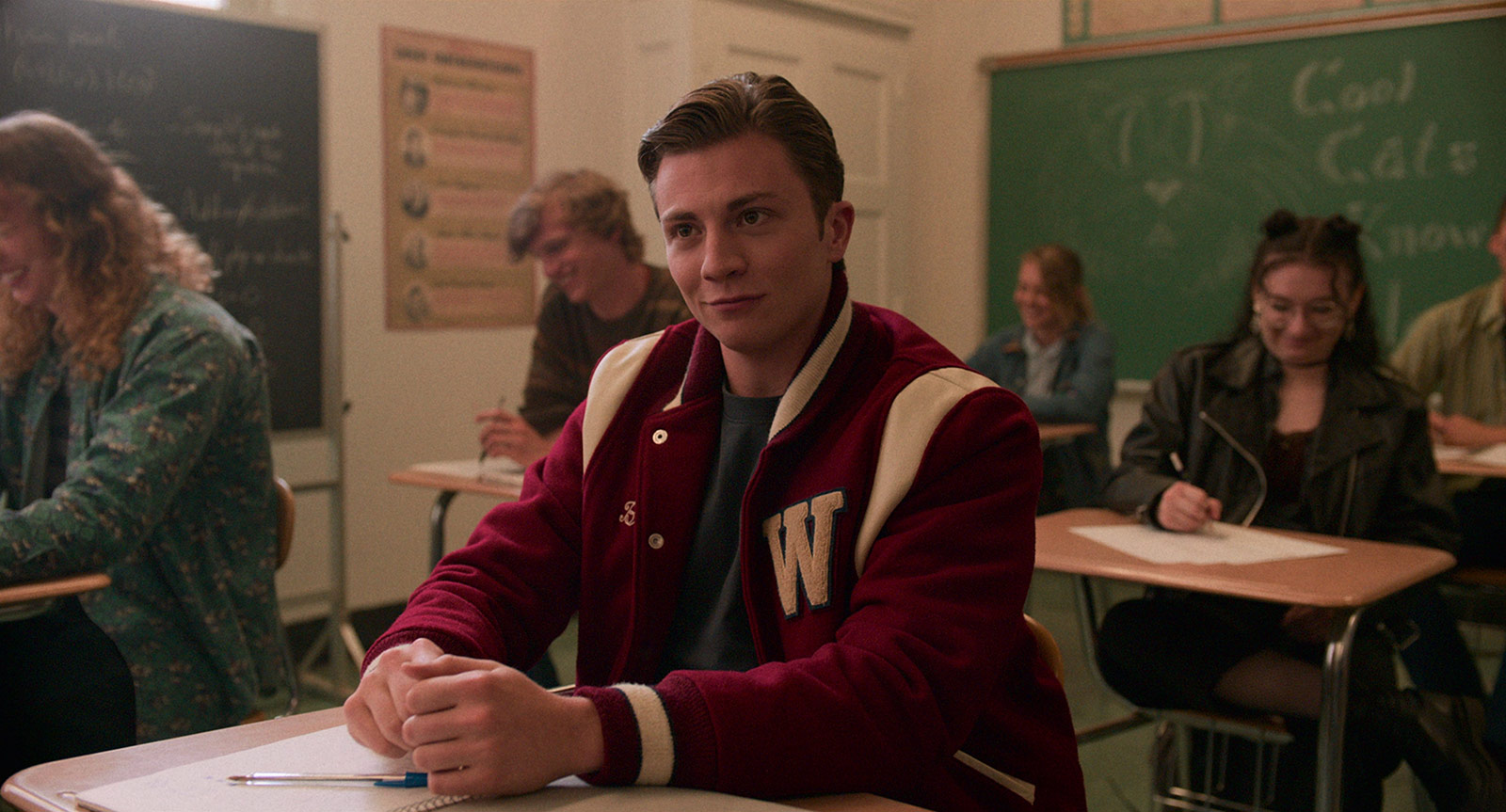