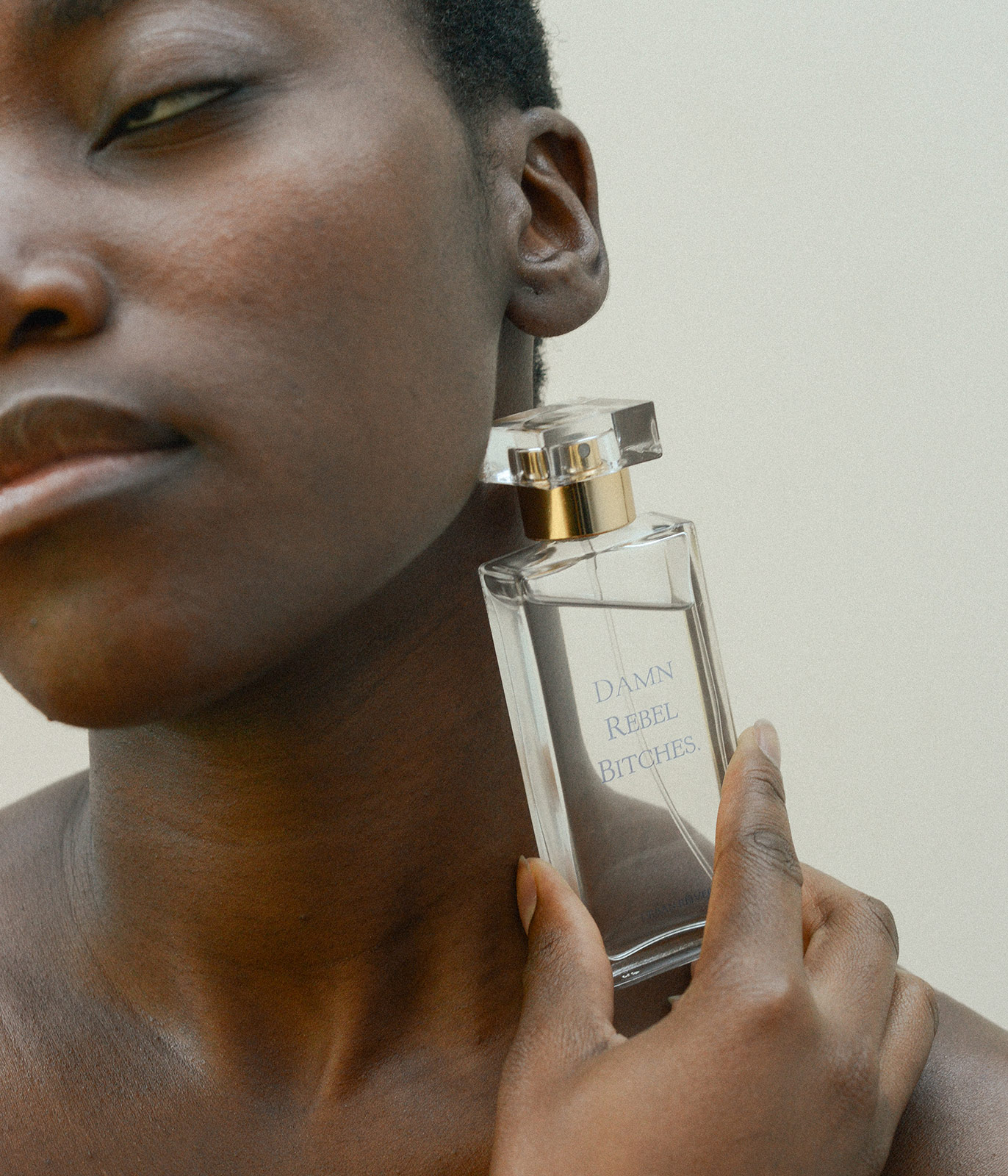 Damn Rebel Bitches is the first fragrance from Scottish perfume house Reek created in collaboration with independent, award-winning perfumer Sarah McCartney. It is also a movement: a clarion call to all who value the sensuous raw beauty of smell and its power to create emotion, demand discussion and provoke action. We talk to the owners – mother-daughter duo Sara and Molly Sheridan – as well as photographer and art director Bethany Grace about everyday acts of rebellion, rediscovering a legacy of female power and how perfume can be political.
Who are Reek?
The team at Reek is made up of strong, empowered women working in various industries brought together by their love of smells and feminist causes.
What’s the message behind the Damn Rebel Bitches fragrance campaign?
There are three messages and we expect there will be more to come. What first motivated us was that in our culture and many others women are not memorialised effectively. In the UK, only 15% of statues are raised to women – and most of those are of Queen Victoria. Sure she was great, but there are a lot of amazing women whose fabulous tales were left at the back of textbooks and rarely spoken about. Secondly, we realise that this is still an issue for women living now, every day, and especially in third world countries. Feminism has become more about subcultures than the actual cause, which is gender equality. We knew that we wanted to create a platform for these discussions using our blog and sticker campaigns. This helped us ensure that our ethos is accessible to everyone, not just to the people who buy our perfume. Our last message – and the one which seems to have caused the biggest stir – is celebrating female beauty in all its forms. Our campaigns are uncast and unretouched. Our bitches don’t need it. They’re beautiful just as they are and we even ask them to pick their favourite images. Our overall message is simple: we are here to empower all women. Come join us. 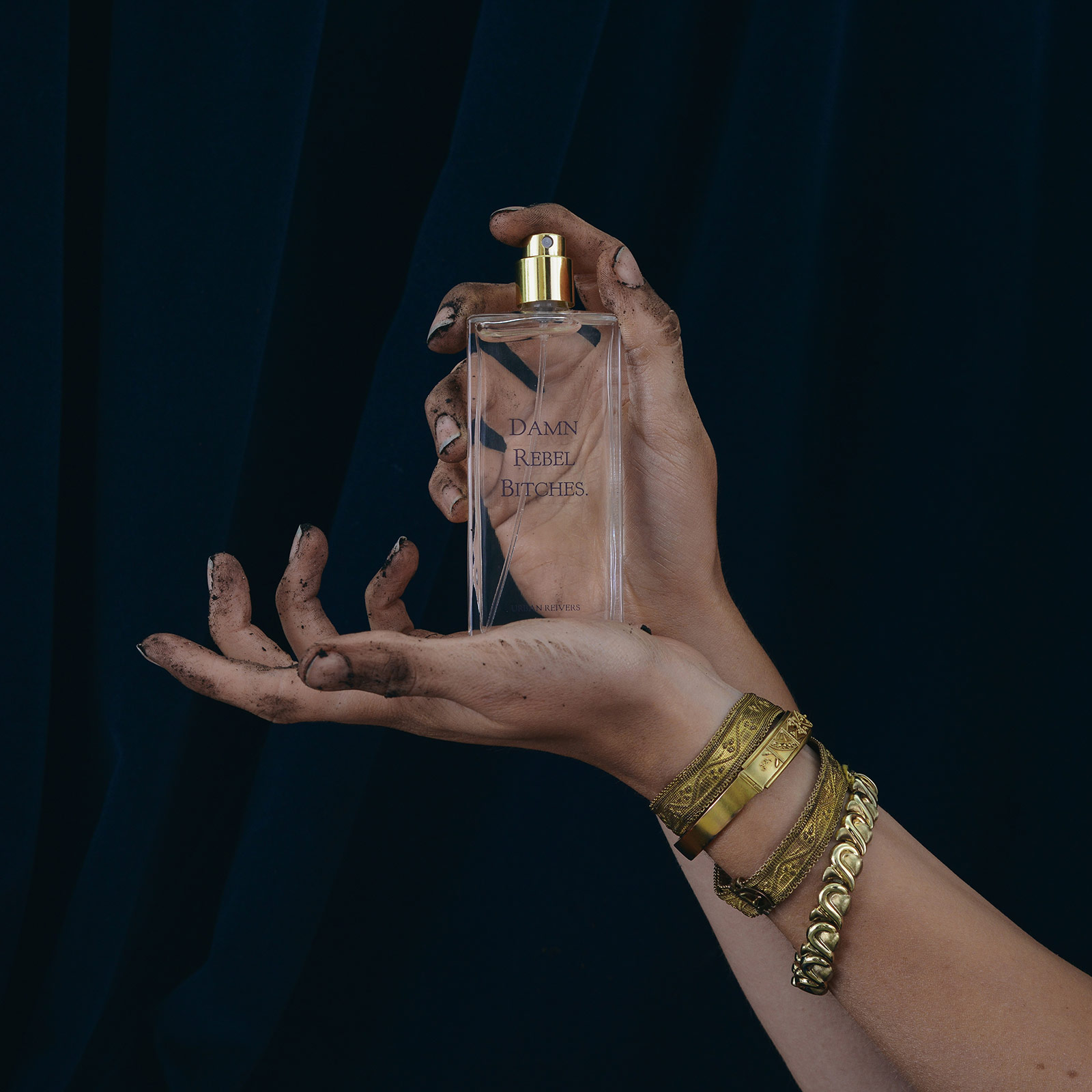 What are the main notes of the scent, and why were they chosen?
Damn Rebel Bitches is a gourmand fragrance and the scents in it were chosen because they are evocative of the lives that Jacobite women led. Blood orange (the peel was used at the time as a deodorant), clary sage (a key ingredient in women’s herbal medicine), malt (brewing was women’s work), pink peppercorn (the most expensive thing in the Jacobite kitchen) and hazelnuts (a huge part of the Highland diet). Our indie perfumer and magical nose Sarah McCartney has helped guide us through this smelly process to create our cruelty free eau de parfum.
How does Scottish culture feature within the brand design?
Damn Rebel Bitches is in memory of Scotland’s forgotten Jacobite women, but feminism is a global cause and we always have an eye to that. When we started our feminist sticker campaign, we wanted to reach out to women all over the world. One of our first stickers was Damn Rebel Bitches Repeal the 8th – in support of the campaign to legalise abortion in Ireland. Every few months we round up all the Bitches, from our newsletter to social media and ask them to vote on a cause to get sticky with. There are so many wonderful causes in the world, so we think it will be an ongoing project. Our latest sticker #pussygrabsback is dedicated to our fellow Bitches across the pond.
The scent is an homage to formidable women – are there any women whose stories in particular you took as inspiration?
So many women’s stories are lost. Our favourite Jacobite lady is Winifred Maxwell, Countess of Nithsdale who broke her husband out of the Tower of London in 1716 by dressing him in drag. She saved his life. Thirty years later, the Duke of Cumberland called the Jacobite women “those Damn Rebel Bitches” because they just wouldn’t give up on their cause. We wanted to honour that and ensure we are also remembered for never giving up on our causes. There are so many women who inspire us and the collaboration of all our heroines and their stories is what creates the real fun at Reek.
Why is your product and campaign different to other products aimed at women?
Our product and campaign aren’t different. Let’s be honest, it’s perfume, non-retouched campaigns and stickers. However our ethos, our team and our wider message is what sets us apart. We do what we do, not because it’s trending. Not because it’s fashionable. But because we believe in it. We know that some people will be put off because our product is called Damn Rebel Bitches but we’re not afraid to lose those customers. It’s worth losing them over something we truly believe in.
While most advertisers seek to disempower, how are you turning that around?
We are all too aware of the terrible perfume adverts: those men-scaling-building-to-surprise-sultry-women-through-windows type of ads. Or a random meeting on a rooftop in Paris, leading to a whirlwind montage of romance. We are sick of it, aren’t you? Worse than disempowerment is fake empowerment. There are so many brands out there for people looking to escape reality and be sucked into the world of fakery. Reek. is an alternative for those looking to be inspired by real life, real women and smell amazing. We think there is a perception that those ideals aren’t glamorous or smart. We want to challenge that. A lot. 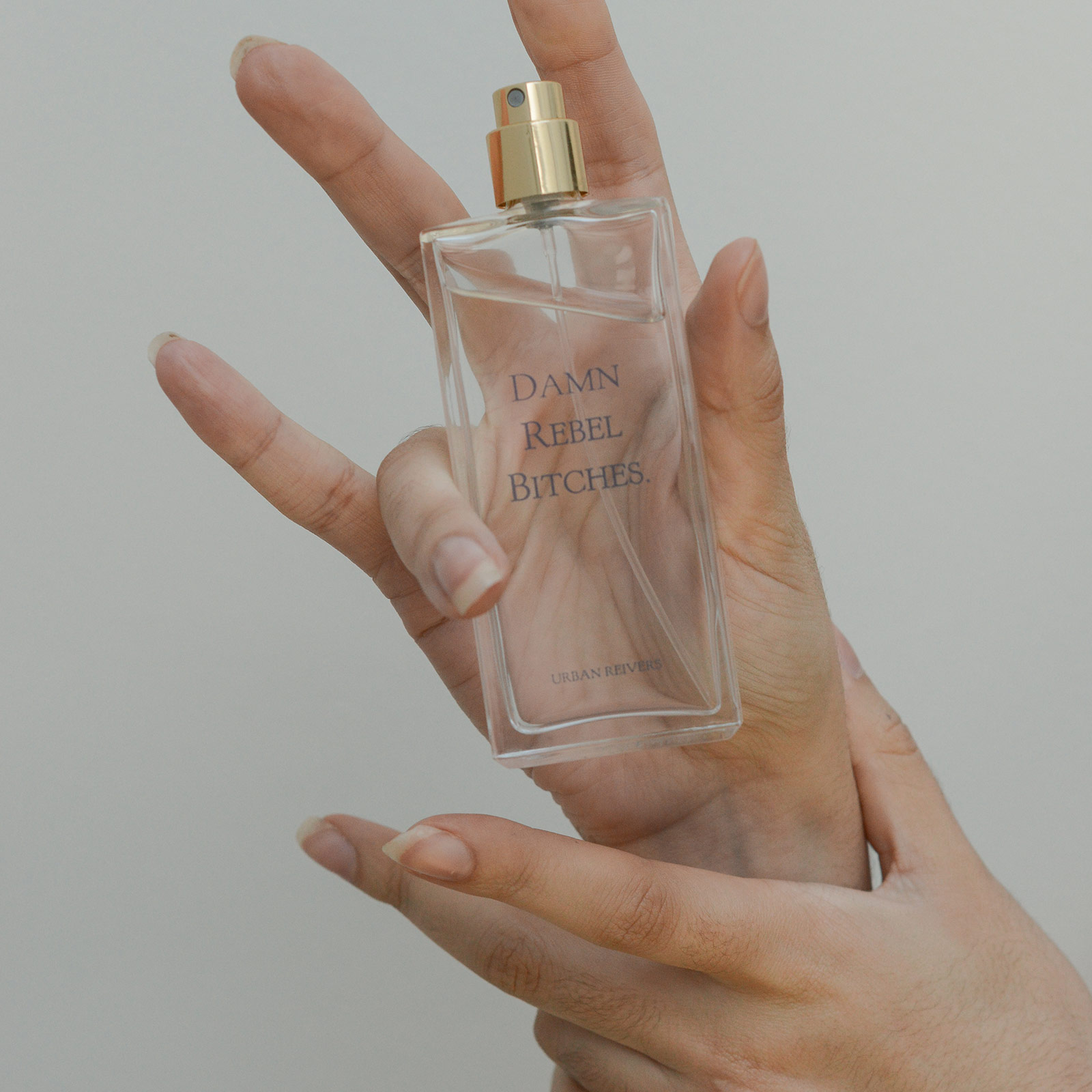 Do you feel that progress is being made towards reclaiming beauty from the heteronormative patriarchal gaze and redefining it on more individual terms?
That’s an interesting question. When we first released the unretouched photos for the Damn Rebel Bitches campaign we had a huge backlash. To us, it seemed obvious that one size does not fit all so why should we pretend that it does? We hadn’t realised how shocking the shots were in the face of a billion-pound industry that sells a sanitised and unattainable version of female beauty. While some women found the images liberating, others were offended. “This looks like a pig”, one woman said of a size 10 model, aged 24. For hours it felt like the Reek. office was sieged by a body-shaming social media army. It was particularly telling that some of those criticising the pictures seemed to feel ‘guilty’. “It seems a little real”, one woman posted, with what we took as a twinge of regret. Like the Jacobites, we were unrepentant. That was the day we put right at the top of the site, in large red letters: “Bitches Unite”. Oh, and amidst the uproar, the good news is, we sold plenty of perfume! At one point the site actually crashed. So, yes, progress is being made: we reckon there’s a long way still to go but we’re up for the journey. We know there are a lot of women out there who want to join us.
What made you decide to reclaim the word ‘bitch’?
There are so many pejorative words for women and so few supportive, positive words. A few weeks after we launched, Vonny Moyes wrote a piece (it’s up on our blog, actually) about reclaiming the word ‘bitch’. It’s called “The Age of the Bitch” – which we reckon, is now.
Are there any other ways in which you are tackling anti-feminism and other forms of ignorance through the brand and campaign?
Our Bitches Unite blog is our main platform for discussions, we love the idea of bringing feminist subcultures together. We recently launched our Bitches Unite totes and tees, which in the longer term we are hoping to create a campaign around. The free sticker campaign has been the most successful at spreading the message, our most popular says “Fuck the pay gap”. About time. Our team were recently in Ireland and saw our “We Repeal the 8th” stickers next to a “my body, my choice” graffiti and stuck onto medical centres. It’s surreal to see the support of our Damn Rebel Bitches and how sticky they’ve been!
Finally, do you have any plans to create a second fragrance or anything else exciting in the pipeline?
We have a new take on Damn Rebel Bitches launching later this year. We wanted to ensure we memorialised these bitches properly before we move straight onto the next. A lot of research about historical and modern women takes place at Reek HQ and – you’ll be happy to know – the issue isn’t finding amazing women to memorialise, but that there just are too many to pick from! And long may it continue. There is definitely more on the horizon. 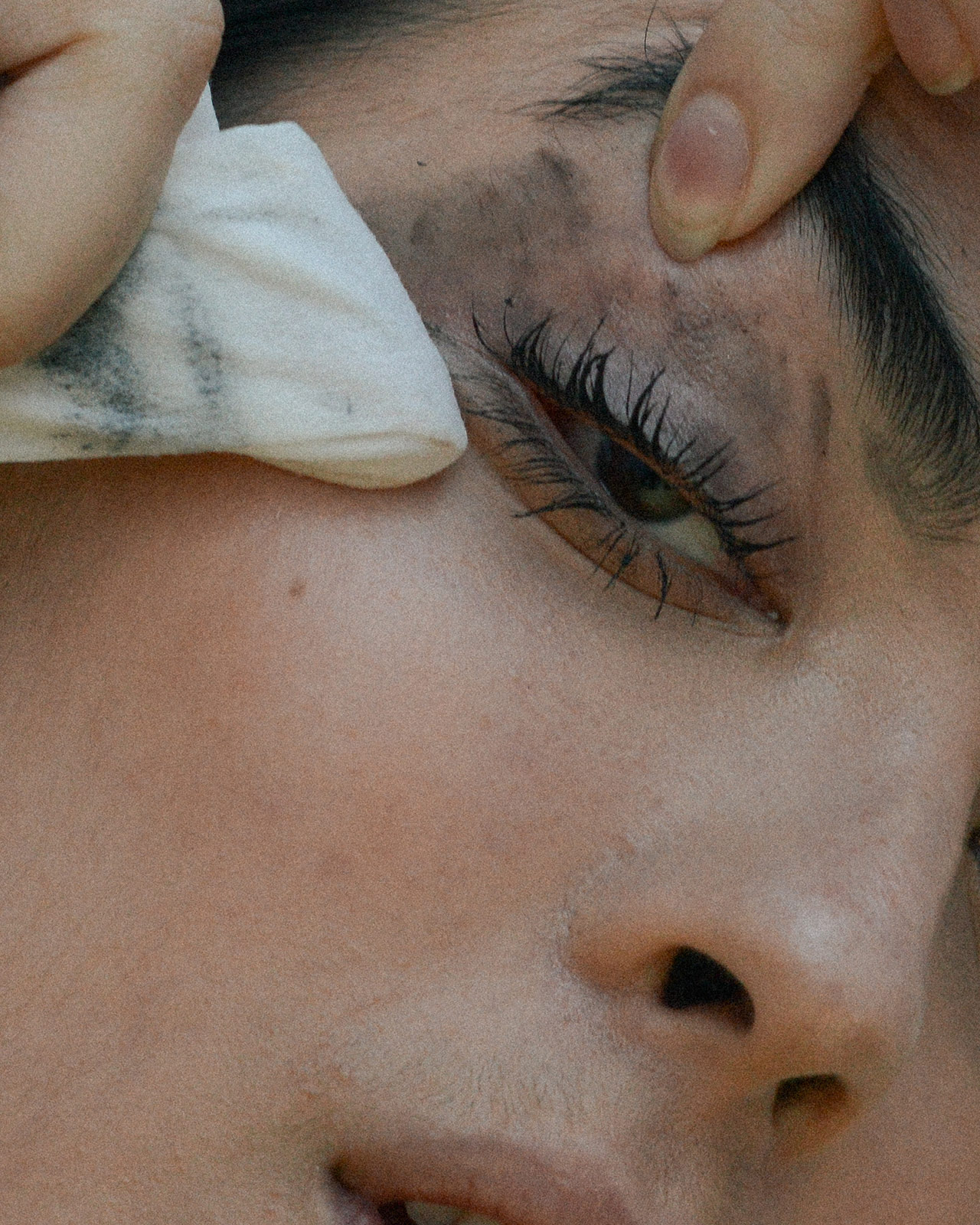 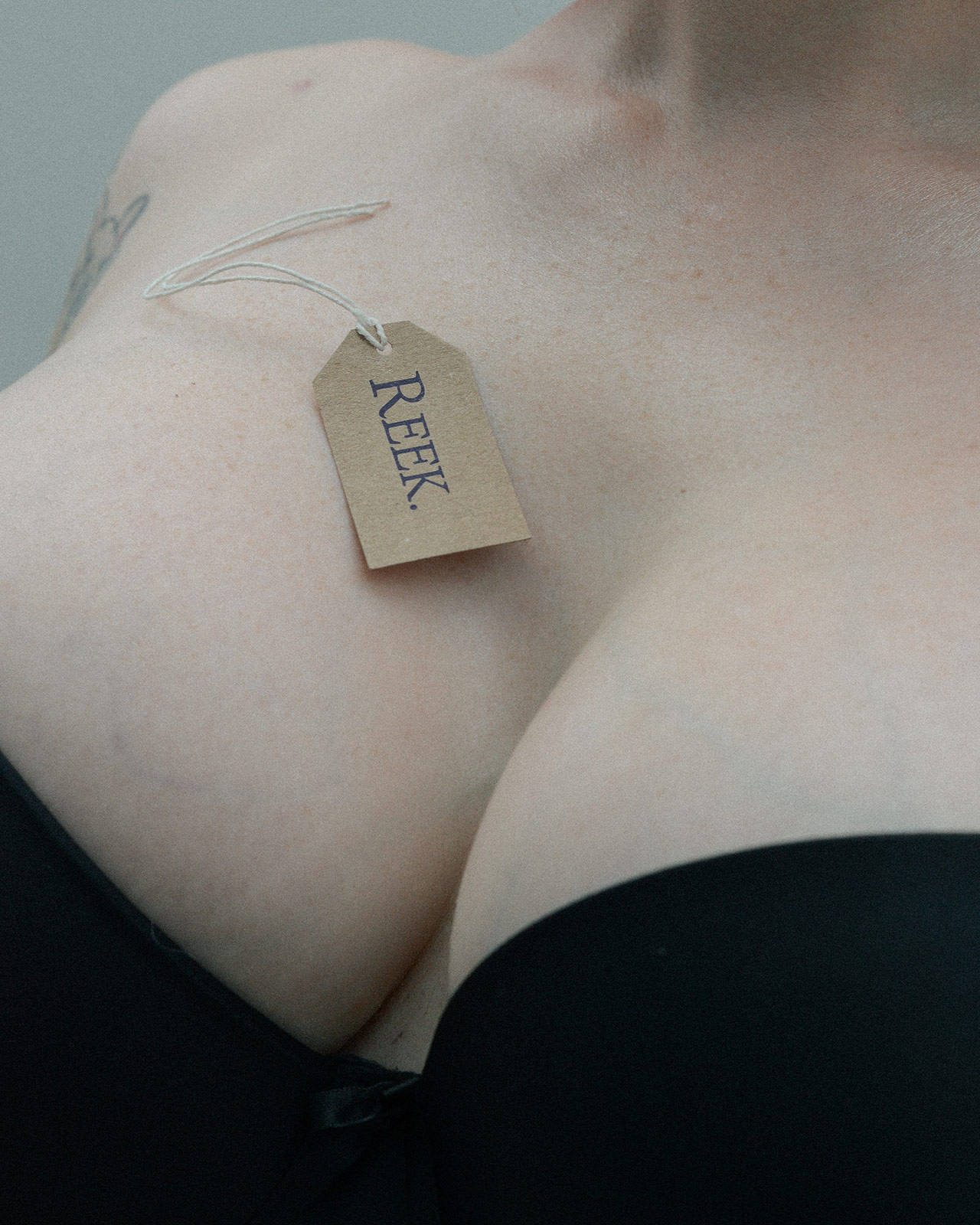