The art of cutting, dividing and fracturing 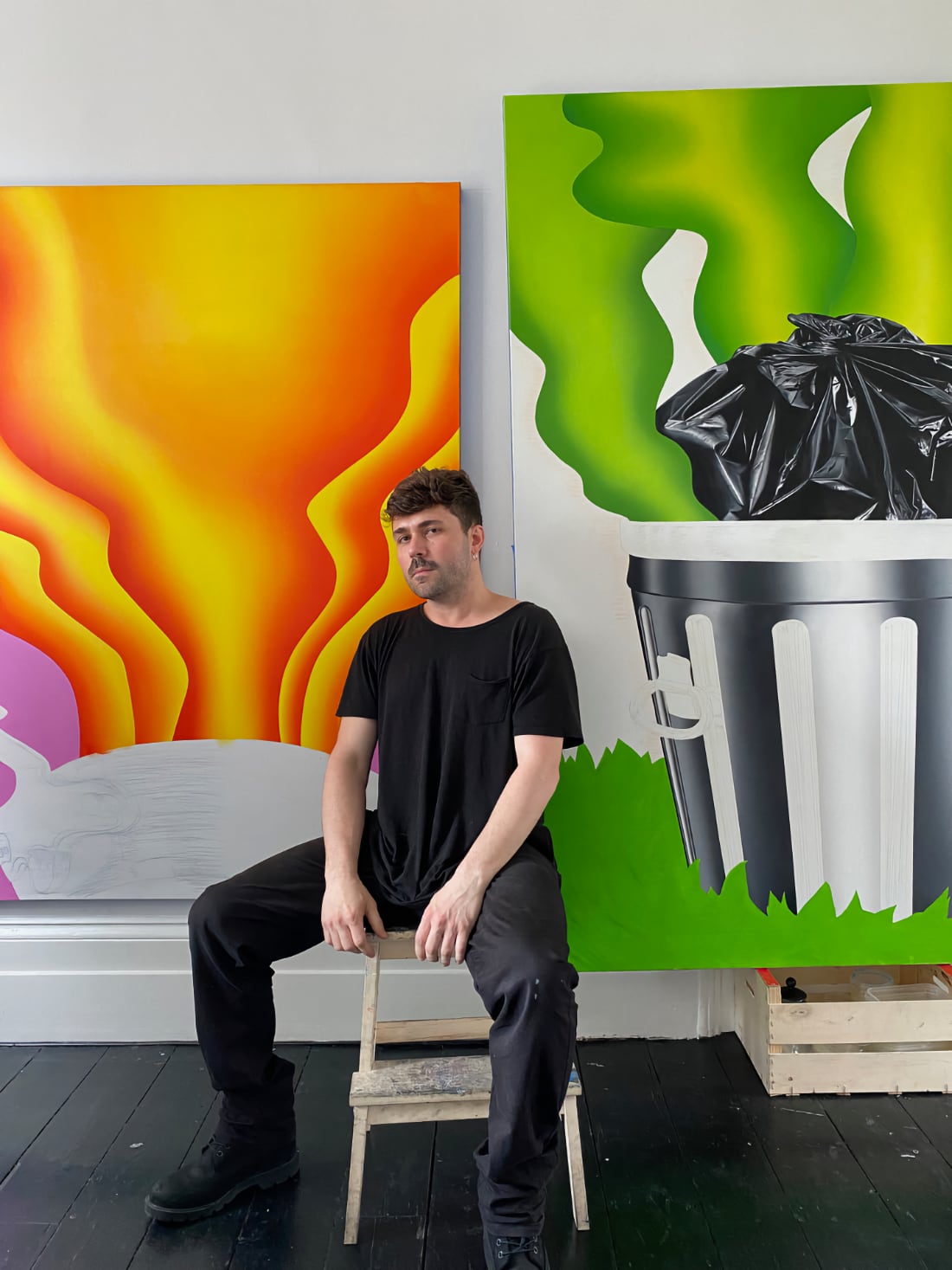 Being enthralled by painting after experimenting with different artistic disciplines, Rafa Silvares plays with the human figure in his work and immerses himself in the idea of functionality. The industrial pieces and machinery that prevail in his colourful creations are a reflection on the subversion of roles, these are a result of a creative process that the artist himself compares with the protocol in an operating room: “When the brush finally goes onto the canvas it is like a scalpel that cuts, divides and fractures the pictorial space.” He now presents his debut solo exhibition, Smoked Ham, at Peres Projects in Berlin. You can visit it until November 19.
Rafa, you were born in Santos (Brazil) but you now live and work between London and Berlin. Where do you answer us from and what can you tell us about your origins?
I’m answering from Berlin, where I currently live and work. I was born in Santos, on the coast of São Paulo state, and lived most of my life in the city of São Paulo. I studied fine art, literature and language at São Paulo University and for many years I worked as a graphic designer, digital illustrator, and DJ. I thought I would pursue a career in one of these areas, but painting got me later on. I had classical painting lessons and also worked as an artist's assistant until I developed autonomy to keep going on my own. The pandemic had me moving to London in late 2020, and now here I am.
You now present your debut solo exhibition, Smoked Ham, at the prestigious Berlin gallery Peres Projects. One of the great enclaves in terms of promoting contemporary art, founded by Javier Perés almost 20 years ago. How do you feel? What does this exhibition mean for you?
It has been an incredible experience, there is a great synergy between me, my work, and Peres. I’m a big admirer of the gallery program and its history. It’s such an honour to be a part of it. I also enjoy the diversity and openness that the gallery conveys concerning the artists they work with. I believe there is a beautiful and complementary relationship between our work, even though they might appear from different worlds.
I see this particular group of works presented in Smoked Ham as a starting point for a vocabulary that I want to keep exploring in the future. It’s also a great opportunity to experience these works in relation to each other. The light, the space and the architecture. The result is pretty exciting. 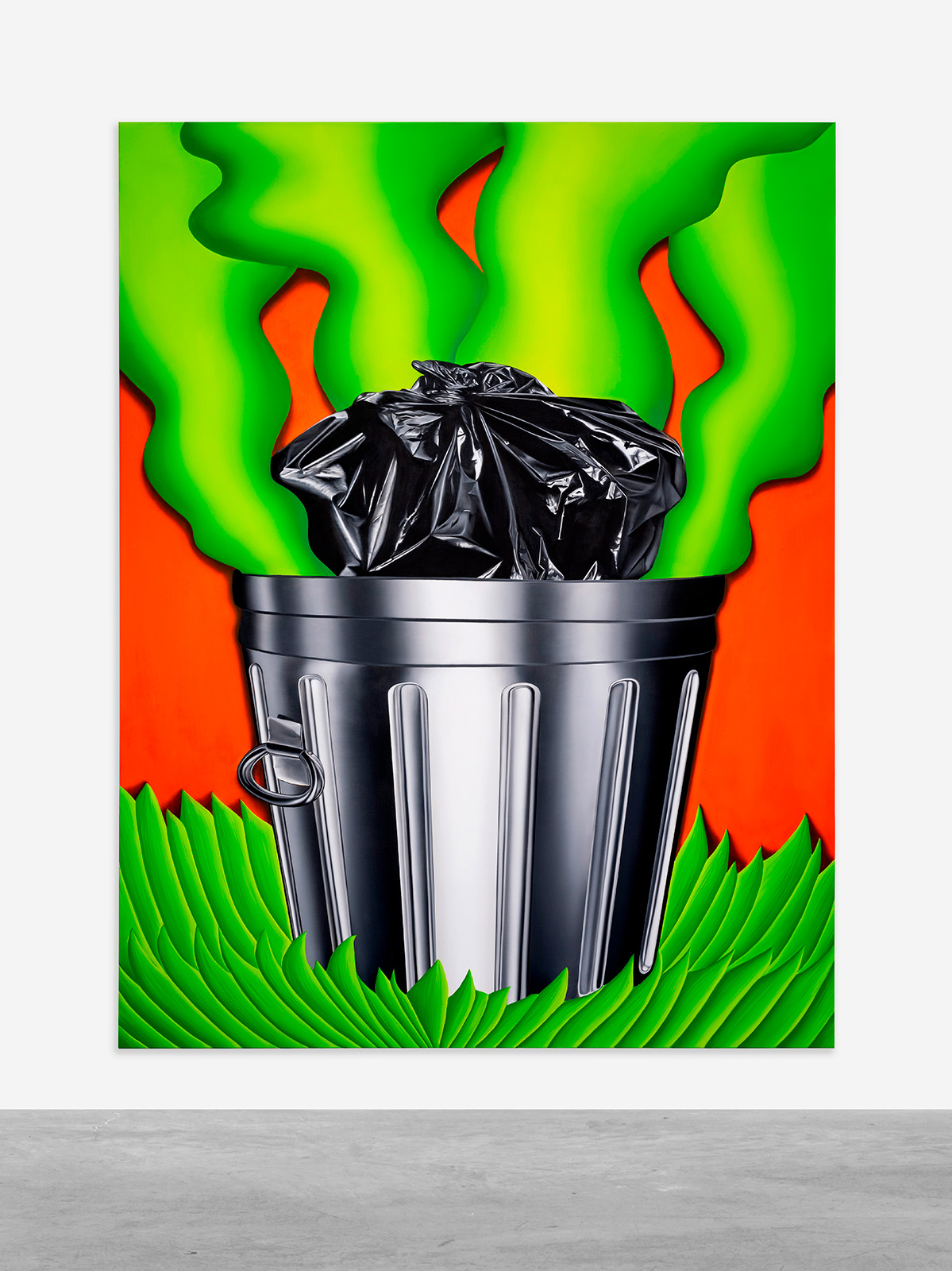 What is clear is that the German capital is characterised by a very active cultural and artistic life. From emerging artists to established creators, many creatives choose this city to show their work. Were you clear that wanted to celebrate your first solo exhibition here? And why?
It’s amazing to have my debut show in Berlin, and honestly quite unexpected. German culture is very formative for me, particularly literature, design and aesthetics. My early practice was informed by Brazilian concrete art/neo concrete which was influenced by German constructivism, Ulm, De Stijl, and Russian suprematism. I was more interested in geometry, abstraction and gestalt at first, later moving on to German painters such as Konrad Klapheck and Neo Rauch.
I believe that the historical backgrounds of painting, philosophy, and aesthetics are super present in the German context, and being here in a place where history and diversity play such important roles turns everything into a much more exciting experience.
If there is something that draws attention at first glance in your paintings, it is colour. An intense colour palette that contrasts with the metallic elements and figures that star in your works. What meaning does colour have for you and how do you use it in your creative process?
My relationship with colour has been more intuitive and vivid, and I’ve always been interested in phenomenology and colour studies like Goethe’s and Josef Albers's interaction of colour. A while ago, I fell for the works of Maurice Merleau-Ponty and especially the idea of corporeality in the Phenomenology of Perception. I love to think that our interaction with colours doesn’t occur exclusively through our eyes, but affects our whole body. That's one of the reasons the scale of the work in relation to the viewer is important to me now.
Also, I think that the way we experience colour through RGB and digital screens is exciting and takes colour vibrations in interesting directions. In general, the usage of colour in my practice has to be playful, and the balance of hot and cold, grayscale and monochrome highly pigmented tones and contrast are key to my work. I also like playing with odd combinations that wouldn’t normally work.
Industrial objects, machinery or household utensils are very present in your work. From garbage cans to brightly coloured smoke that comes out of pipes, all of them are especially relevant in your paintings. Why? When did you start experimenting with these shapes?
I’ve always been attracted by objects more than the human figure, so still, life and collage were more appealing to me from the start. When I was a kid I used to grab two A4 sheets of paper and draw screens and keyboards to form a laptop and play with it. In art school, I was magnetised to metallic and industrial objects and the idea of functionality, so I guess these elements have always interested me. 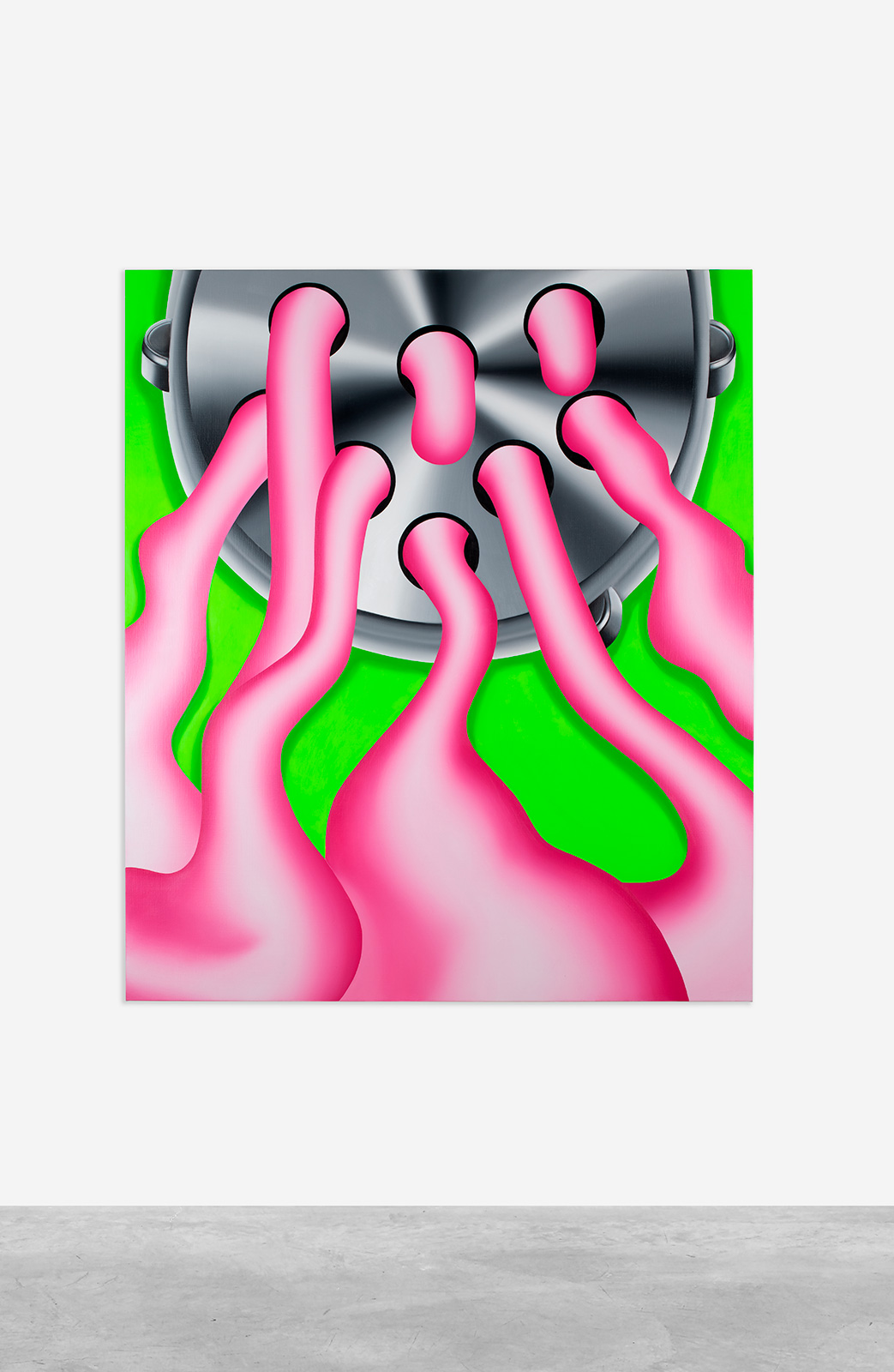 And we cannot ignore the title of the exhibition, Smoked Ham. Why this name? “I like thinking of how we manipulate things in our daily life. It is very random and also insane how things come inside and out of tubes, pipes, holes,” you stated in a previous interview. Do you think that we pay little attention to the environment that surrounds us, to the elements that live with us and we are used to?
The title alludes to the presence of the body and the investigation of the surface in the colour gradients and layers in the paintings. A smoked ham doesn’t appear in my mind as a piece of meat, but rather as a smooth pictorial effect.
About my daily life, I tend to automate processes around me. When an object doesn't work or breaks, anger or frustration follows and I find that comical. I love the play called A tragedy which was written by Vladimir Mayakovsky way back in 1913. It’s a satyrical view on urban life and industrial power, and there is a moment when objects gather and riot against humans. I really dig this idea of autonomy; a moment when objects get out of control to produce an intense, unstoppable force. I think it also alludes to the subversion of roles.
How is a day in your life? Do you follow a strict work routine or not?
I have a thing for dull and banal daily life: simple things such as making coffee, vacuuming, doing the dishes and hair drying. These are repetitive things I do every day that are automatic, but also ridiculous in a way. In general, try to have a strict routine, but in the past few months things turned upside down. I was in the studio working during the night and not eating at regular times. I like the intensity but I can easily get sucked into the work and alienate myself. For that reason, a more regulated routine is important.
And do you think it is possible to seek inspiration, or does it come when you least expect it?
I believe it is a conjunction of factors. Inspiration can come from many different sources like films, books, historical references, unexpected spaces or ordinary places. After learning more about the process of Georges Perec, I delved deeper into a more systematic way of mapping my vocabulary.
I usually work with lists of names, sensations, places, objects etc, and these lists end up forming constellations of ideas that may or may not attract each other. Suddenly a few of them spark the desire to start a composition. Usually in the middle of the street, in the supermarket, or inside the house looking at normal things, I'm always in flirt mode with them and I try to adopt a certain openness to things that attract me visually. That specific element must persist until it reaches the point of becoming unavoidable. It has to fill the canvas space. Then I scribble down a composition idea until it makes sense visually. Then I finally move on to the painting.

We have talked about the elements that prevail in your work and the personal style that you have forged, but what can you tell us about your technique?
I like to think of the studio as a laboratory or an operating room, and I take a more clinical approach when dealing with the atelier.
I have a cleaning routine with the materials. It's funny because I find the aspect of the carnage of friend's studios so beautiful as if a bloody ritual had taken place there. With me, it's the opposite. I like tidying up and organising materials, and I see it as a preparation of the work. The act of putting a brush on the canvas is only a small part of the painting. Sweeping, tidying up and collecting images are all part of the process. Even walking the studio. When the brush finally goes onto the canvas it is like a scalpel that cuts, divides and fractures the pictorial space. There's also a layering aspect, which for me is very smilier to the process of applying make-up. The technique is a combination of precision and blending.
Your work could well resemble pop due to its colour palette and its capacity for surprise, but the objects you recreate, far from being whimsical, are mostly utilitarian and industrial. Who are your main references and what pictorial movements inspire you?
There is one particularly intriguing painting that has acted as a mysterious and almost inexhaustible source of stimuli throughout my journey, and that is Duchamp's Tu m' (1918). Dada, futurism, metaphysical painting, De Chirico, Picabia and Polke are always orbiting my imagination as well as religious paintings and early Renaissance such as Fra Angelico and Masaccio. Brazilian artists such as Tarsila do Amaral, Vicente do Rego Monteiro and Regina Silveira also occupy a large space in my imagination, and it's impossible to forget Claes Oldenburg and Hockney.
And what can you tell us about your next projects?
There are a few exciting projects to come next year. I’ll have a solo booth at Frieze New York City with Peres Projects in the first semester. 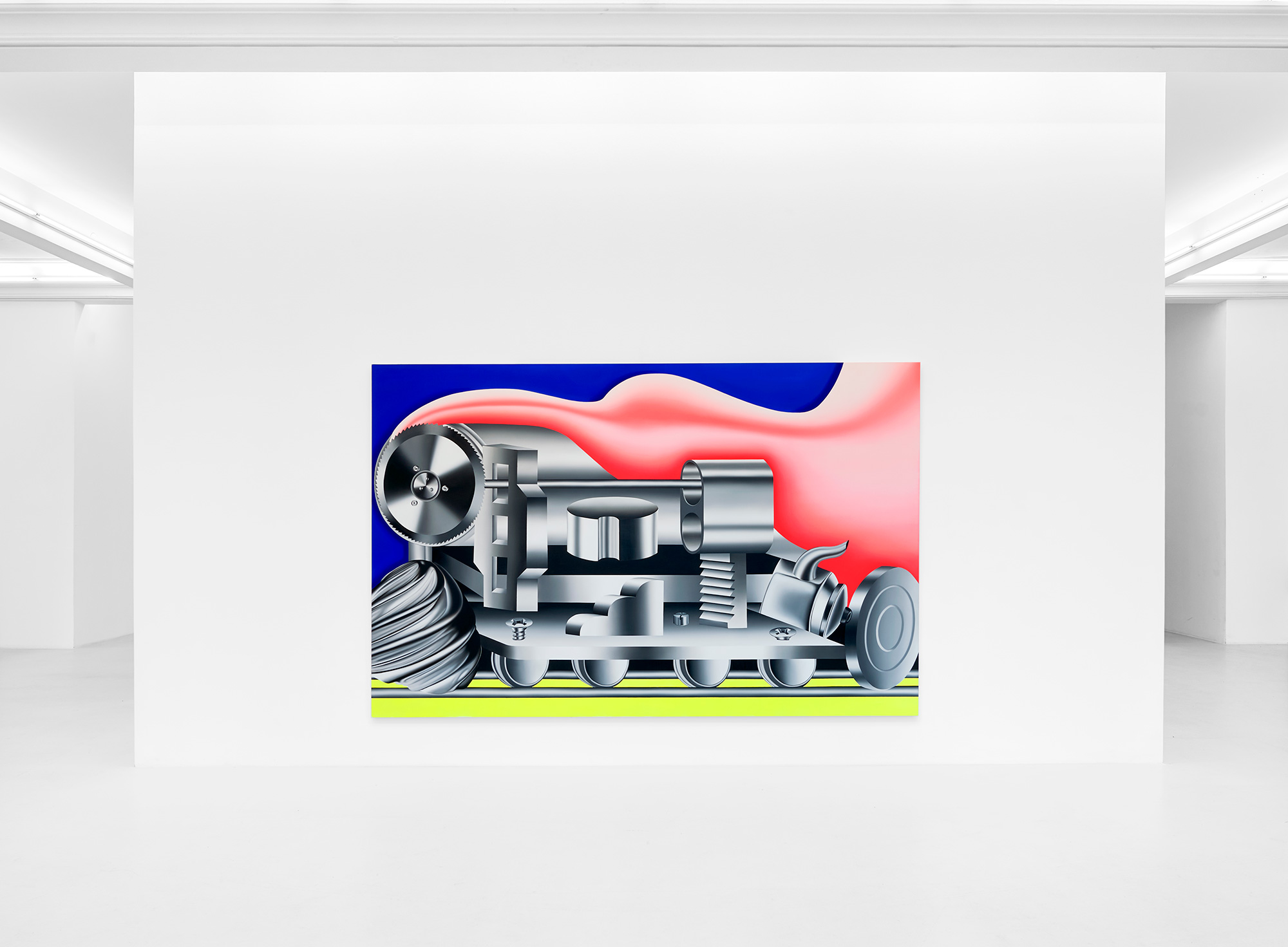 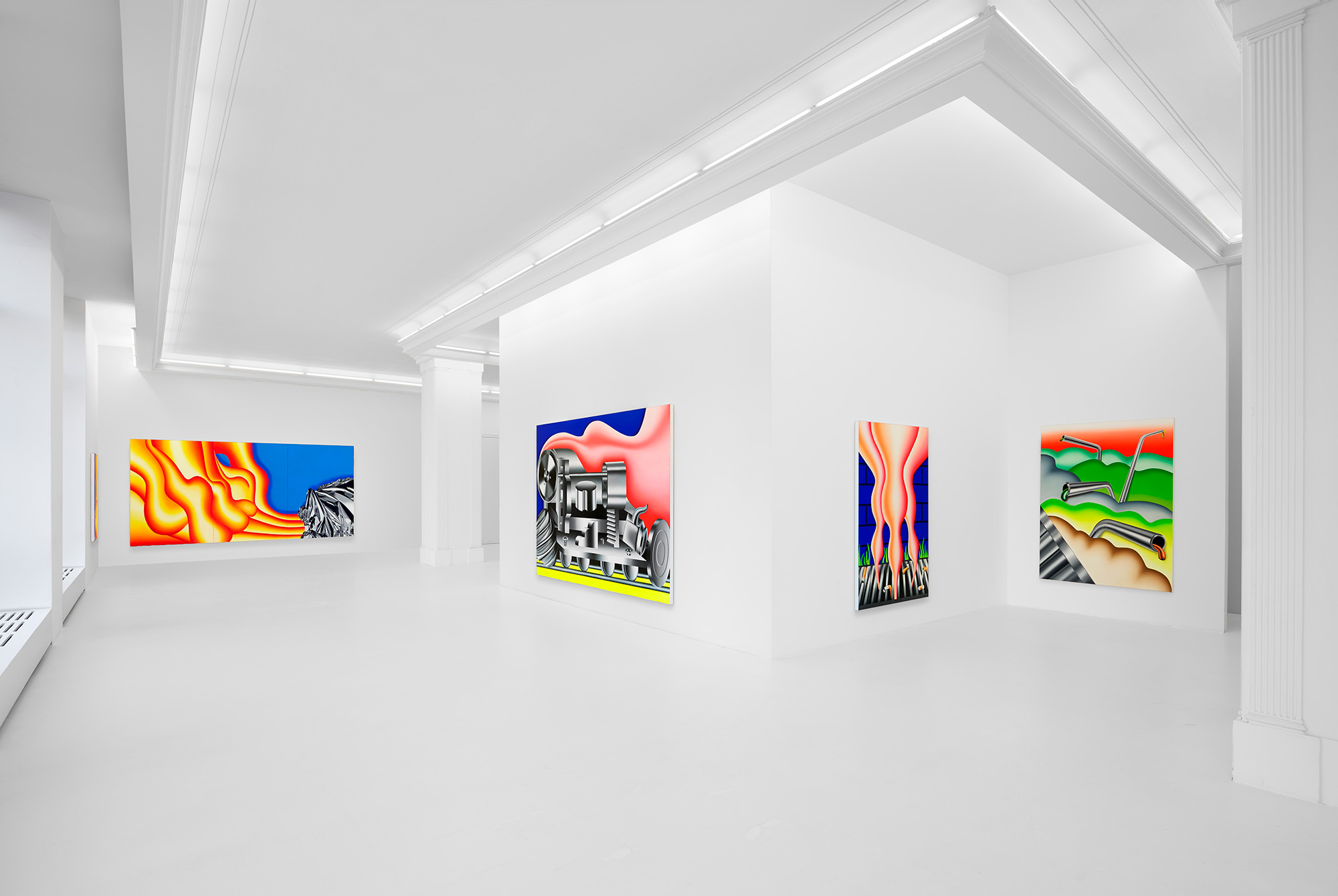 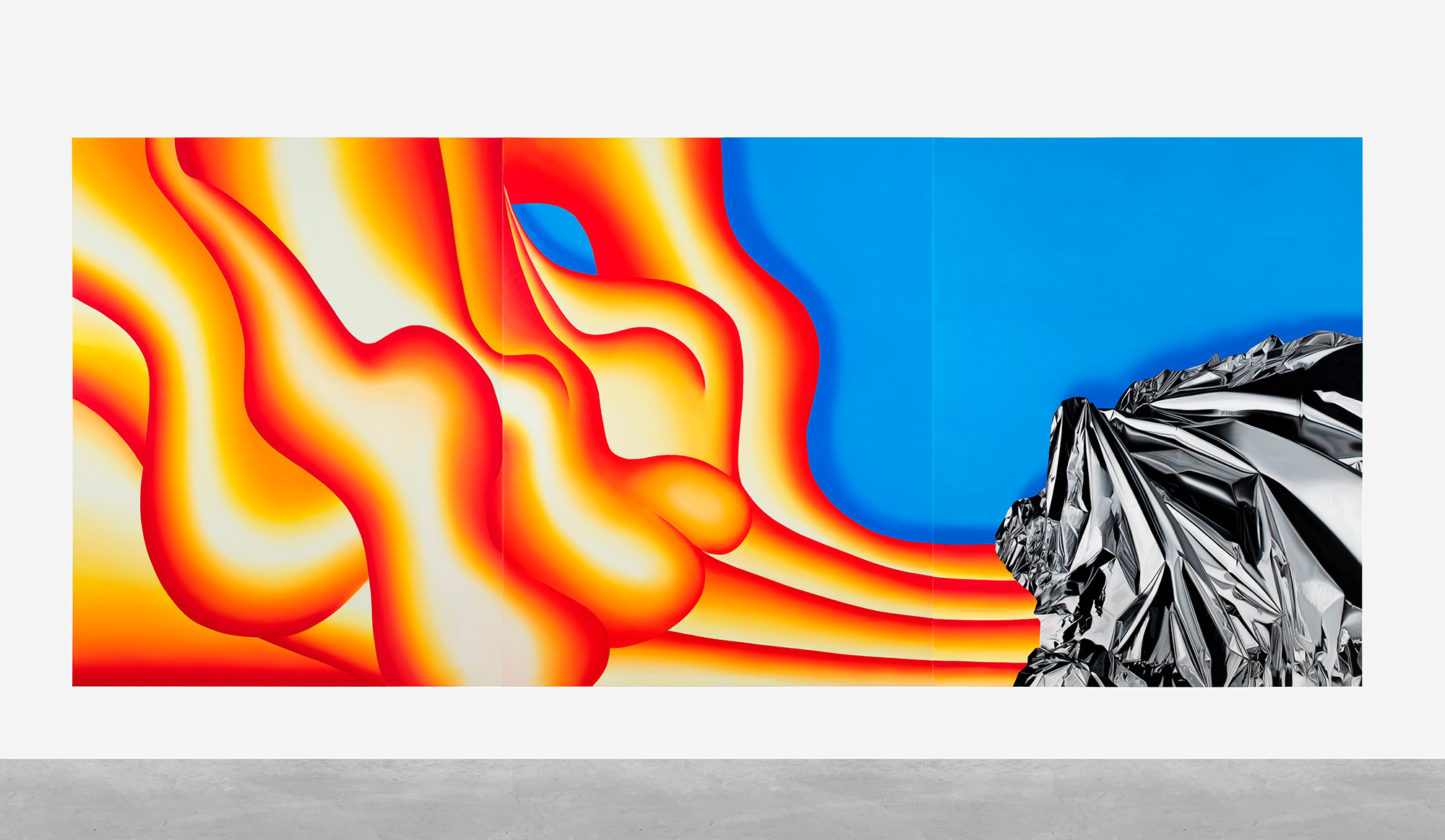 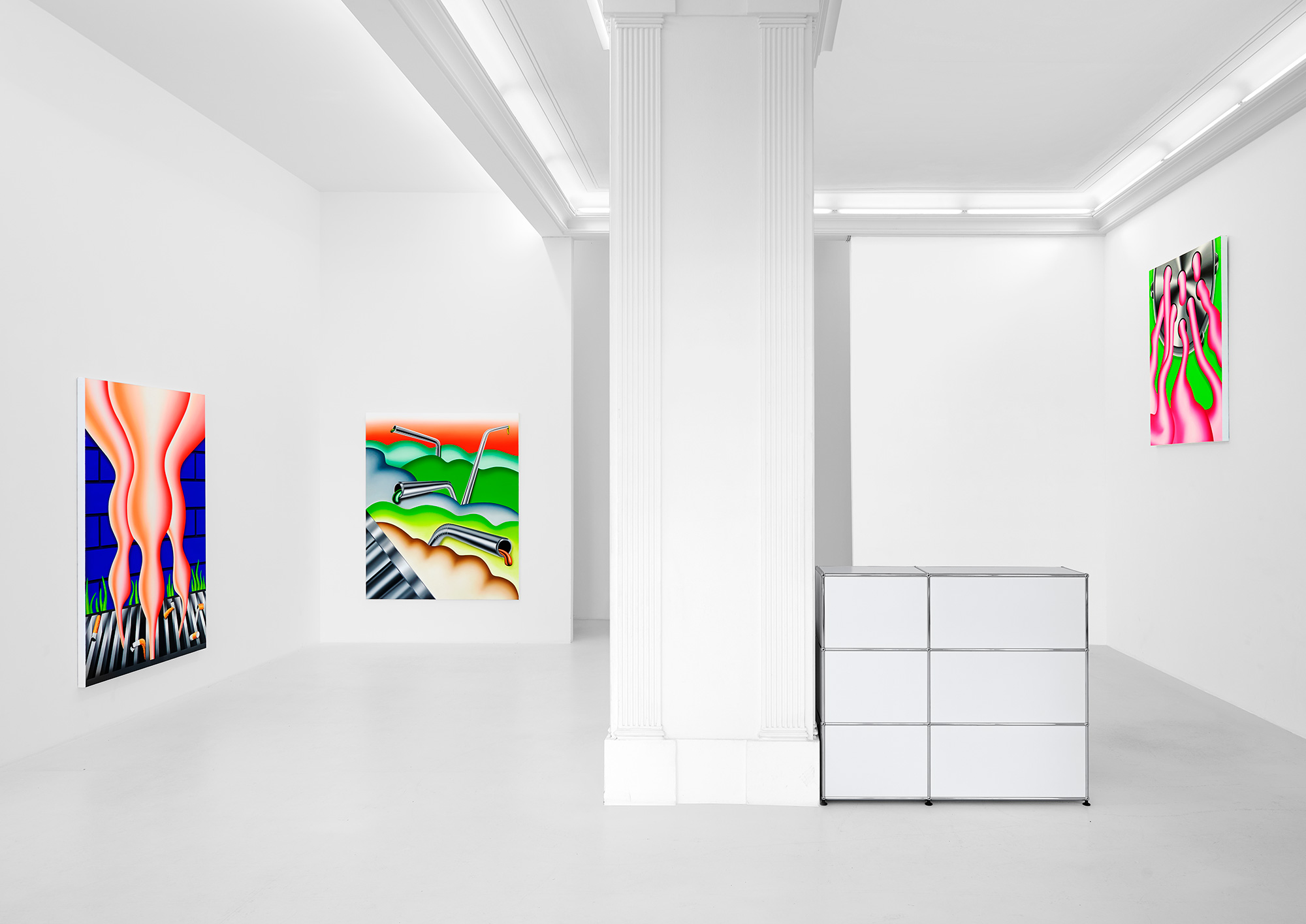 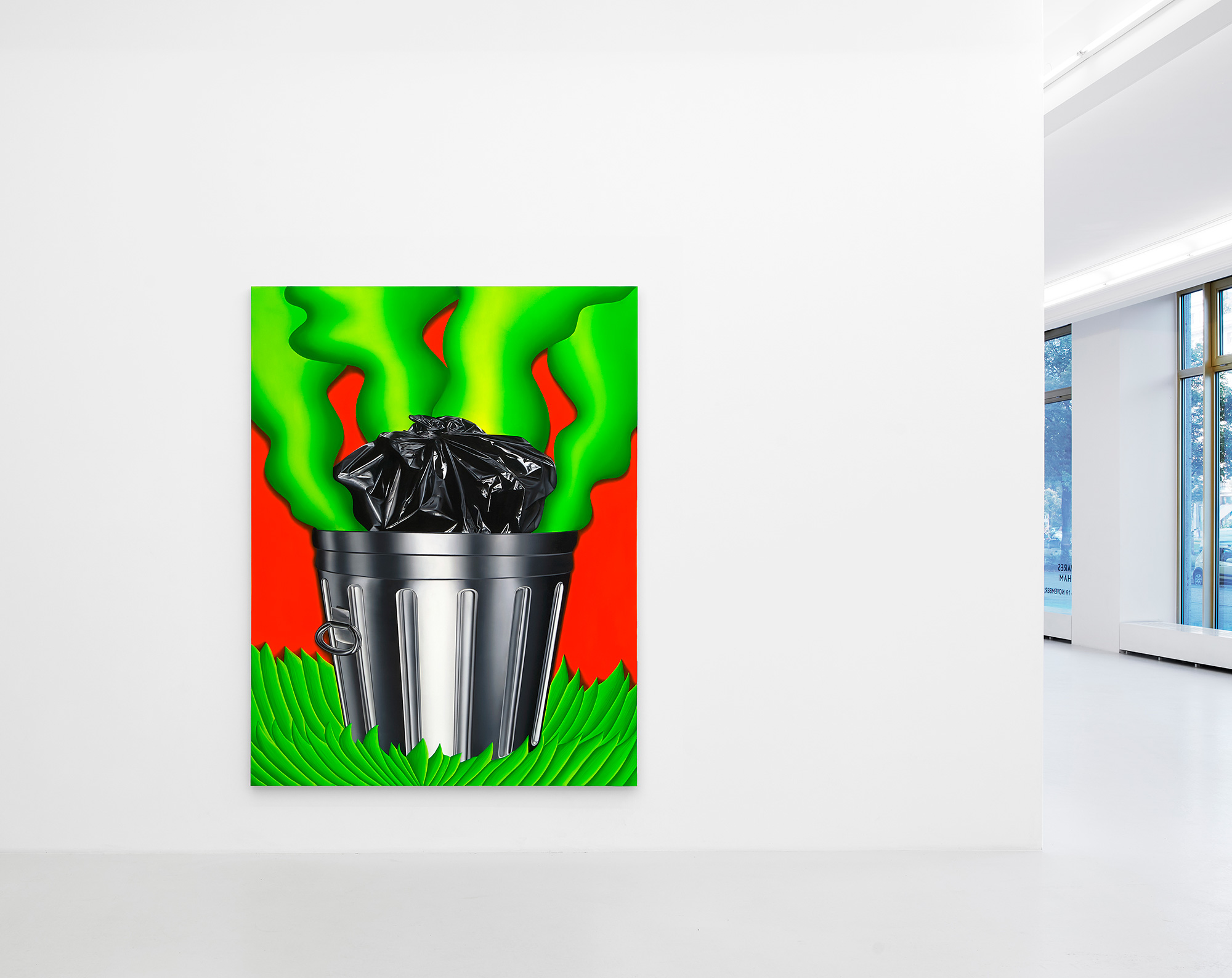 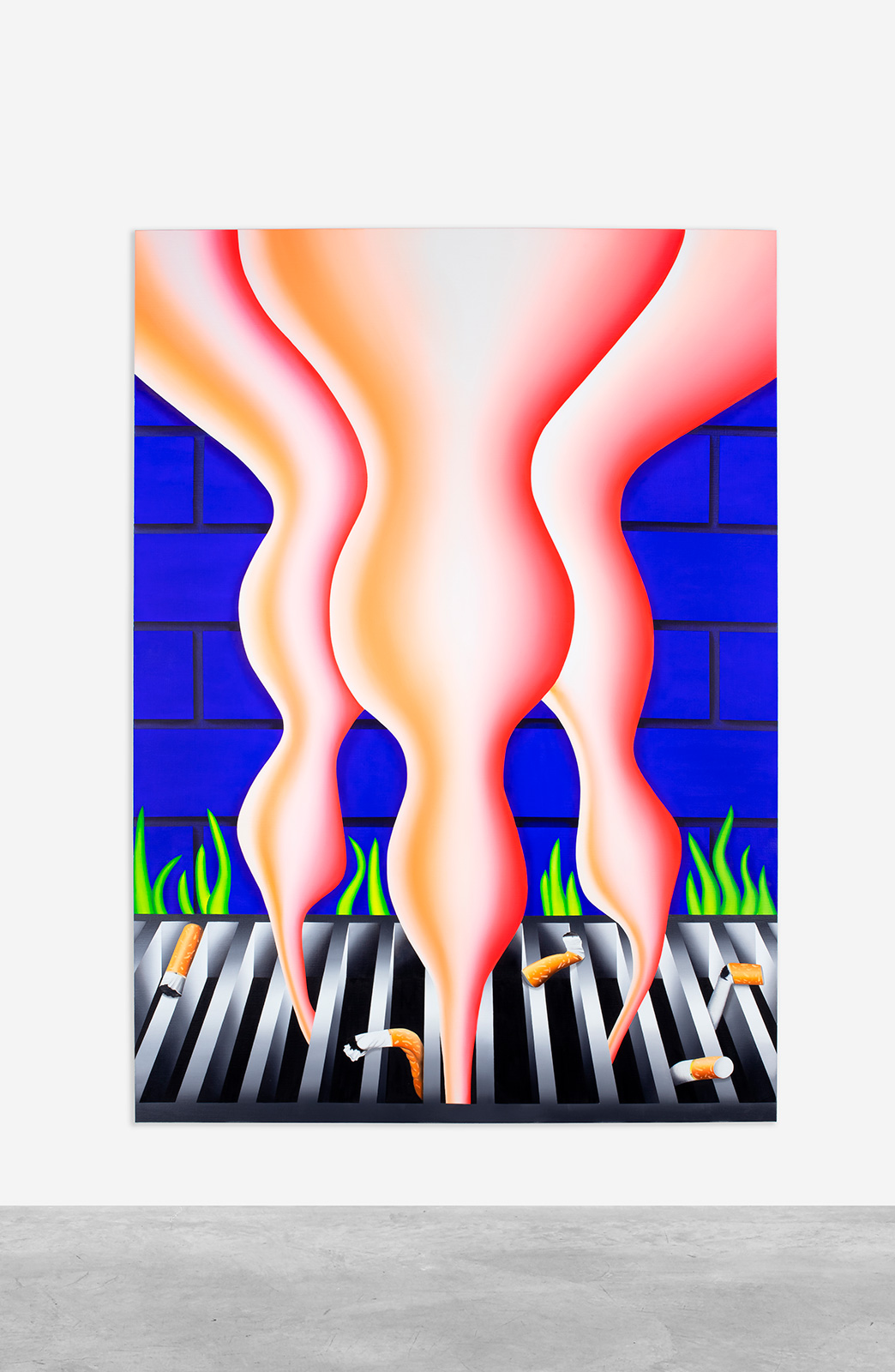 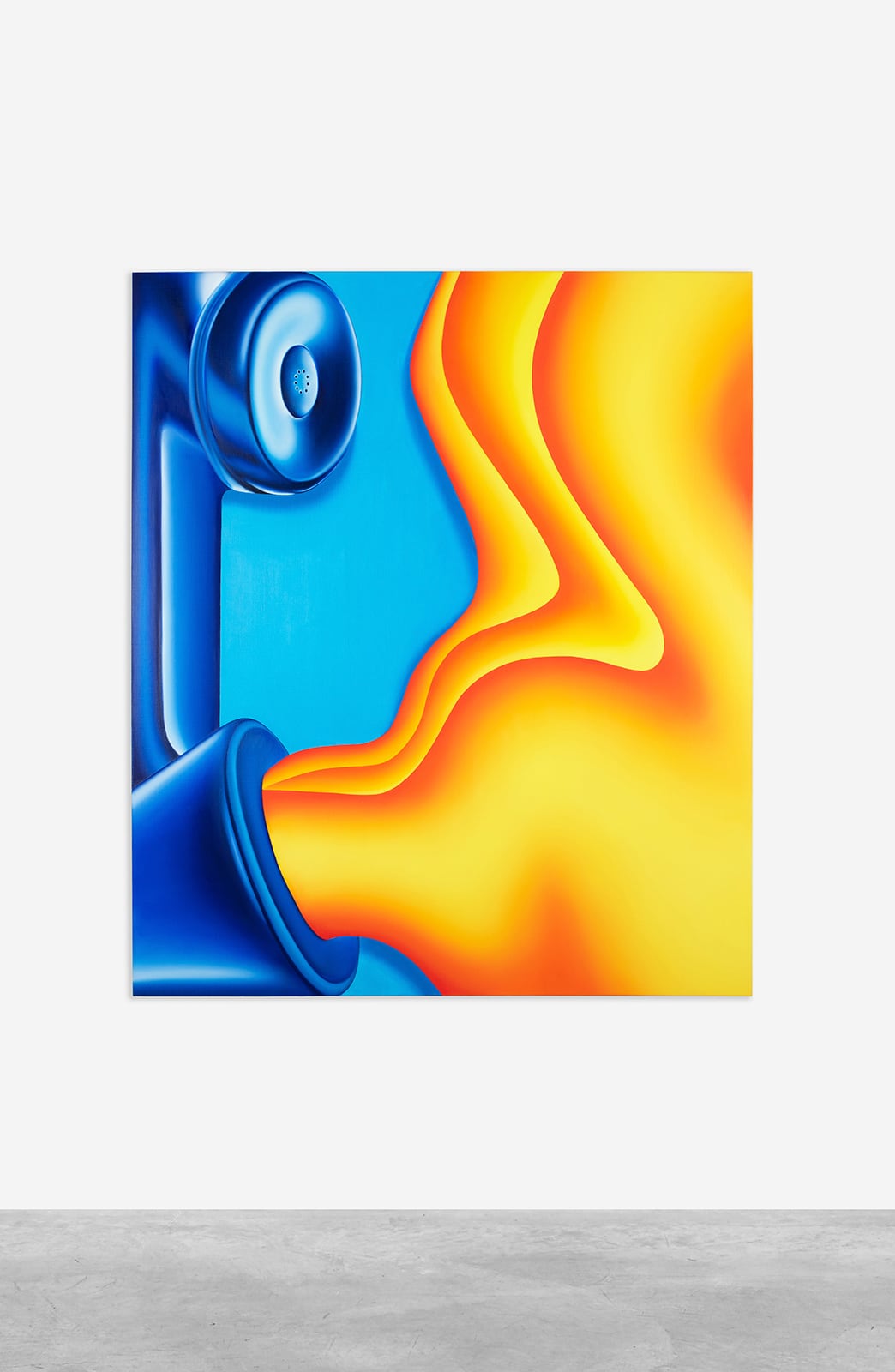