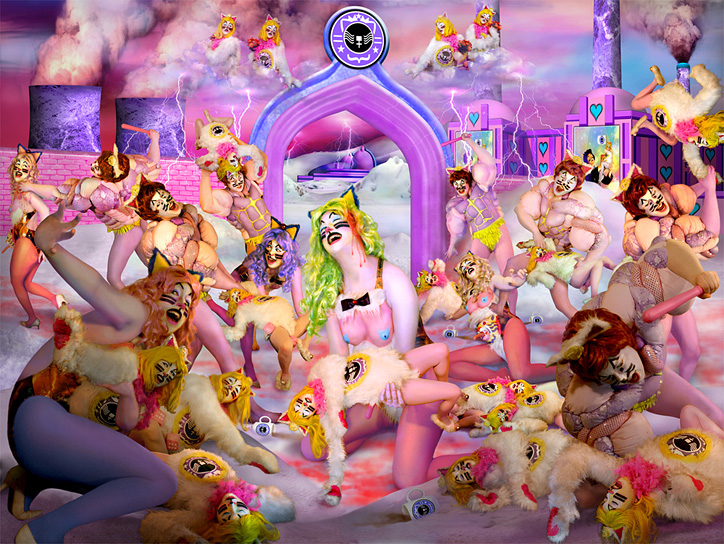 Rachel Maclean (1987, Scotland) is a multidisciplinary artist who lives and works in Edinburgh. Through her imaginary creatures, Maclean ironies about the society, the woman's role and the new "feminism's" wave in pop-starts. A fake girl-power just moved only for the actual money in an imaginary world composed by beautiful-grotesque beings who are inside Rachel's mind. They are projected into the world onto a digital form or the own artist's skin. In conversation with Rachel we discover an artist who inhuman creatures are far beyond of becoming just grotesque digital animations, they express the power of freedom onto the digital world.

Can you tell us how would you describe your work?

My work slips inside and outside of history and into imagined futures, creating hyper-glowing, artificially saturated visions that are both nauseatingly positive and cheerfully grotesque. I am a Glasgow based artist working largely in green screen composite video and digital print, often exhibiting this alongside props, costumes and related sculpture and painting. I am the only actor or model in my work and invent a variety of characters that mime to appropriated audio and toy with age and gender. These clones embody unstable identities: conversing, interacting and shifting between cartoonish archetypes, ghostly apparitions and hollow inhuman playthings. My videos attempt to stylistically unify the aesthetic of The Dollar Store, Youtube, Manga, Hieronymus Bosch and High Renaissance painting with MTV style green screen and channel changing cuts.

What has prompted you to create your beautifully grotesque beings?

I've always been fascinated by images which are at once compelling and repulsive. I like to toe a fine line between an aesthetic of benign, saccharine cuteness and a distastefully baroque form of grotesquely. I take inspiration from a whole range of sources, everything from Disney Princess to William Hogarth. I think the expression or experience of disgust, whether at a work of art or a bodily function, is very interesting and is indicative of our complex social relationship with others. It is also often reflective of the desire to recoil and distance ourselves from the experience of a particular class, race, gender or sexual orientation. I think someone like Katie Price is a good example of this relationship and in many ways performs the function of the Victorian Freak Show for the 21st Century. She's reflective upon a certain kind of social class that are regarded as wealthy but tastelessly brash by the conservative middle classes. Everything about her image and actions entertains us through it's grotesquely exaggerated performance of this stereotype and confirms for many the sense of their own relative superiority.

Do you consider your work political?

Yes, in some ways. Although there is some work that is more directly political than others. For example, the recent video I made called 'The Lion and The Unicorn' explores the interrelationship between Scottish and British national identity. This is obviously a very contentious issue given the upcoming Referendum on Scottish Independence in 2014 and I was keen to couch the work very clearly within this debate. However, in this case I intended that my opinion on the issue was left ambiguous, as I was more interested in provoking discussion and at some level unveiling the absurdity of the signifier and semi-historical fictions that play into contemporary political decision making and help form an abstracted sense of national pride.

Would you consider your work is related to the feminist cause? A clear example would be Skin & Bones? Can you explain what is this about?

Yes, I intend for my work to be feminist. Again, this is made explicit in some works and maybe less so in others. In the example you mentioned from the series 'Girls Just Wanna Have Fun', I intended to create images of woman who appear sexually available and with all the basic masquerade of sexiness, but nonetheless fail in their achievement of this ideal, rendering them tragic, ugly and grotesque. Here I was keen to look at the representation of what I would regard as the Spice Girls, 'Girl Power' brand of feminism or to update things a bit, what Beyonce would refer to as a powerful 'independent woman'. I'm pretty cynical about this kind of pop feminism and believe the it is in many ways it is just a rebranded sexism, which drives an ideal of liberation through financial success, but still expects women to fulfil their role as sexual objects.

In your work you're the only model and the only actor. Why is it that?

At some level it's playful and childish, I like dressing up, there is something liberating and interesting about pretending to be someone else. It helps you reflect in a more open way on your own sense of self and question fixed ideas of the person you think you are or want to be. I like to play out and explore the idea that identity and gender are at some level a performance or masquerade and try to create narratives in which very fixed notions of self are exaggerated to the point they become absurd, or alternatively begin to fall apart and are gradually revealed to be unstable and fraudulent.

How do you prepare all your characters?

I design all the costumes, props and face-paint for my work and the characters are usually tied into the larger aesthetic idea for the video. All my characters are an amalgam of reference points and never just a simple imitation of a specific person or typical costume. For example, in my recent video 'The Lion and The Unicorn', the character of 'The Queen' at once references Mary Queen of Scots and Queen Elisabeth, wearing a costume recombined from an array of Union Jack merchandise available to celebrate the 2012 Diamond Jubilee.

What is the favourite piece of your work?

Usually the idea I haven't made yet is my favourite, things are always a bit more exciting when they are at the ideas stage. I can have pretty mixed emotions about a piece I've just finished or have been working on for a long time. In some cases I think that there are ideas you just need to get out your head and finished, in order that you can move onto the next thing. I think it's very difficult to have a reasonable, objective point of view about a very recent work, I find that I usually feel at once over-protectively sensitive to criticism and at the same time utterly sick of the sight of it. Maybe after a year or so I can come round to seeing it all a bit more objectively however.

Most of your work is via digital print and video. How important for an artist is the digital era?

I think the digital era is as important as you want it to be as an artist. I love the possibilities that are opened up by programs like Photoshop and After Effects, but I also think that what interests me about this kind of software is the sense in which it is only ever an adaptation or simulation of methods and techniques available in non-digital media. Almost every tool in Photoshop exists in a physical form, take for example the paintbrush, the pen, the paint-bucket and the hand tool. They don't necessarily perform exactly the same function, but they use material tools and processes as a starting point. When working I'm often keen to bring styles and processes from older media, particularly painting, into a digital space. Additionally, I think with any celebration of an advance in technology there is always a concurrent denial and nostalgia for the past. For many artists, computer generated images only highlight the nuances of older technologies, for example a lot of people are going back to work in analogue video and film as they recognise it has a quality that can't be achieved through digital video.

What other field in art, would you like to explore?

It would be great fun to work in theatre, I love the idea of designing a set and working on costumes for a play.

What is next for you?

Next up for me is an exhibition in May as part of Collective Gallery's New Work Scotland Programme in Edinburgh, for which I'll be showing a new, 40-minute video called 'Over The Rainbow.' Following that I've got a solo show at Edinburgh Printmakers during the International Festival in August, for which I've been commissioned to produce a series of new print works in response to the upcoming Referendum on Scottish Independence in 2014. 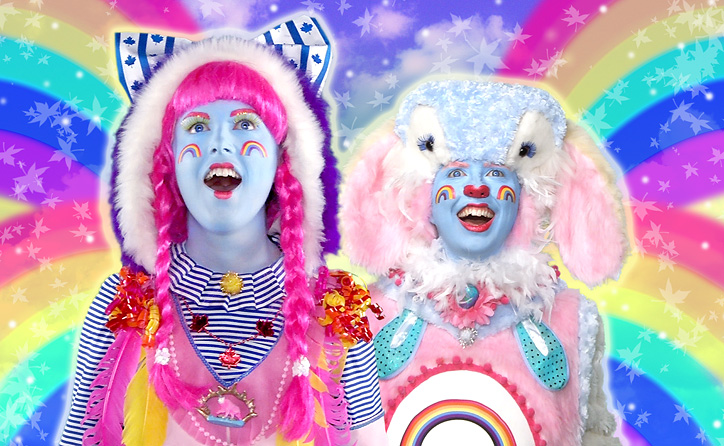 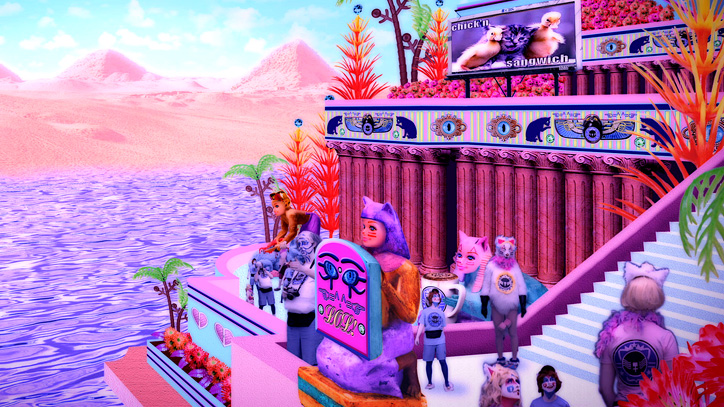 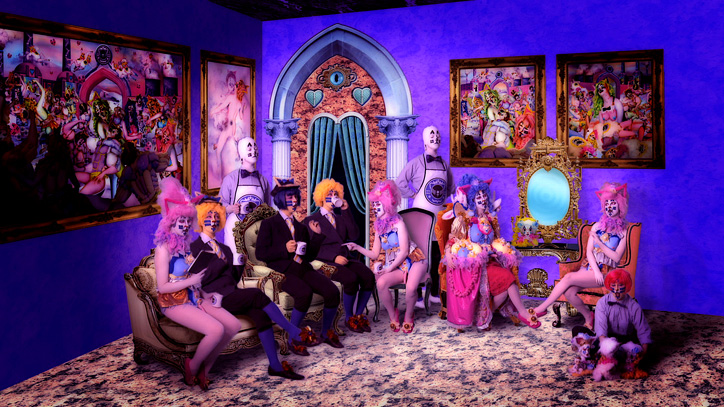 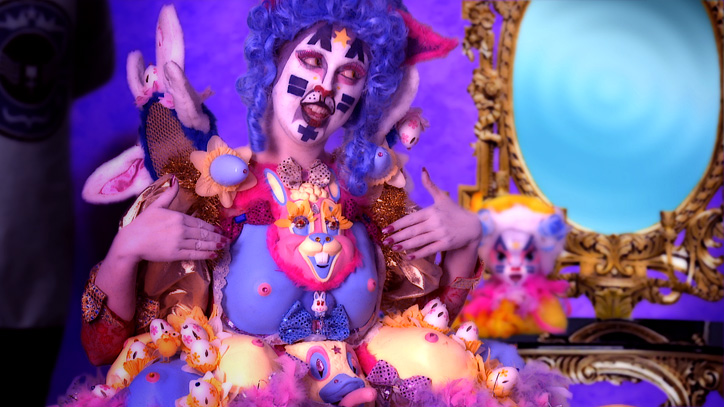 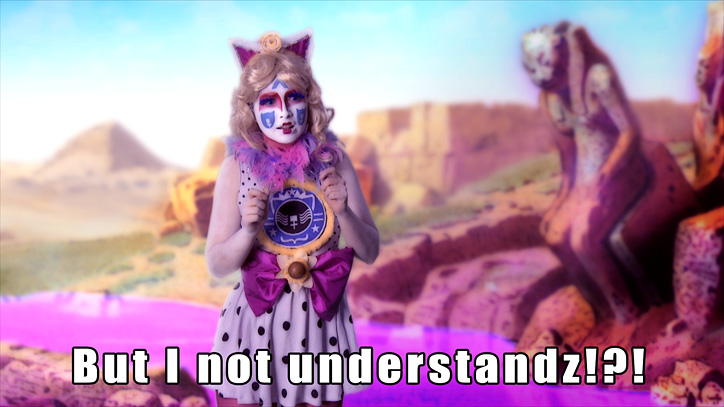 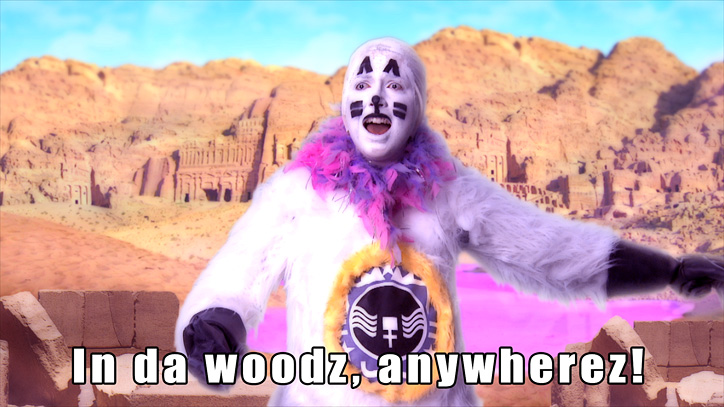 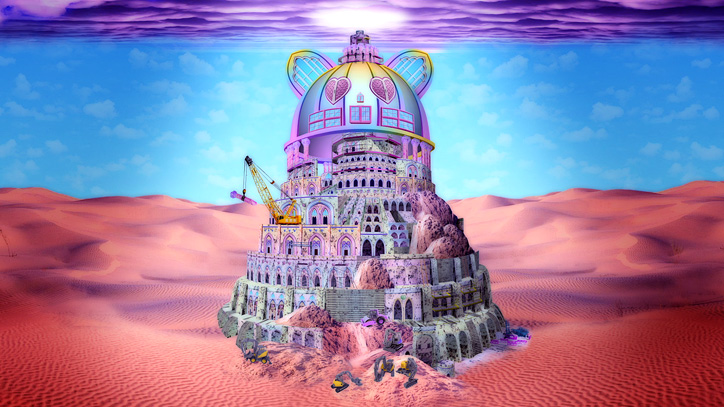 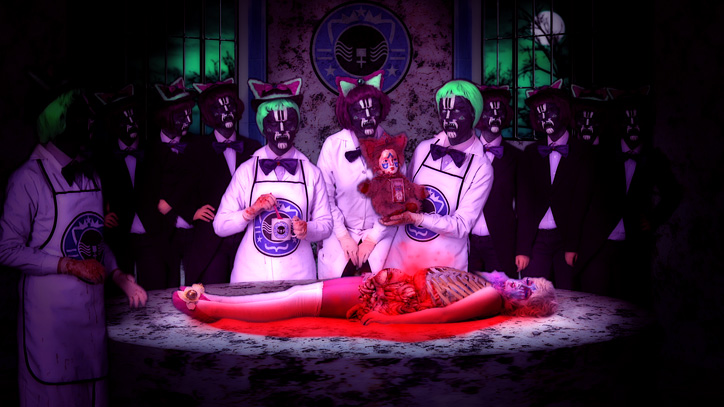 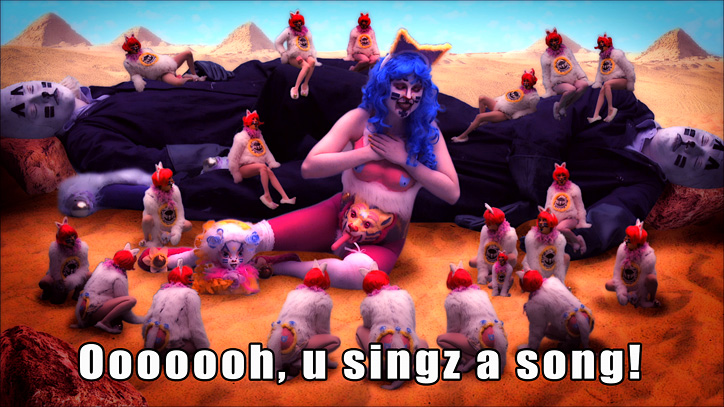 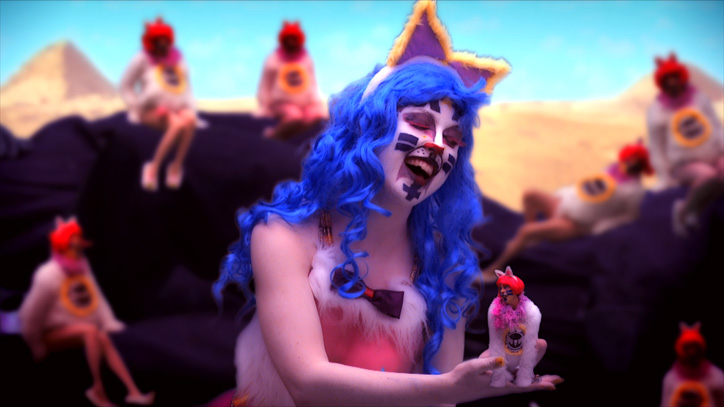 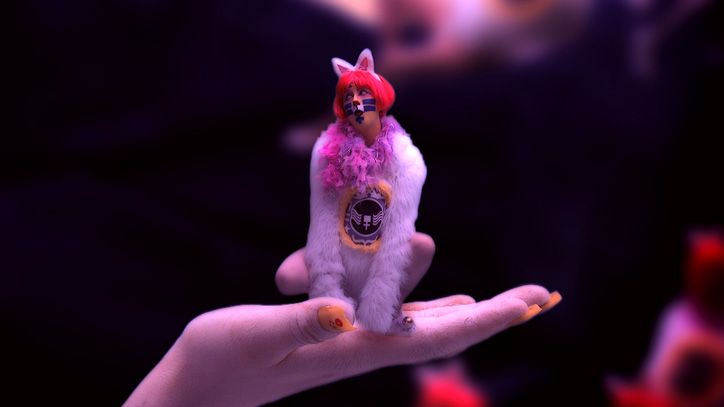 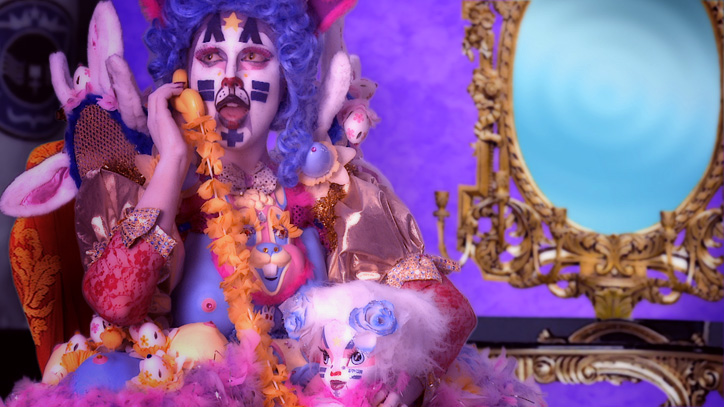 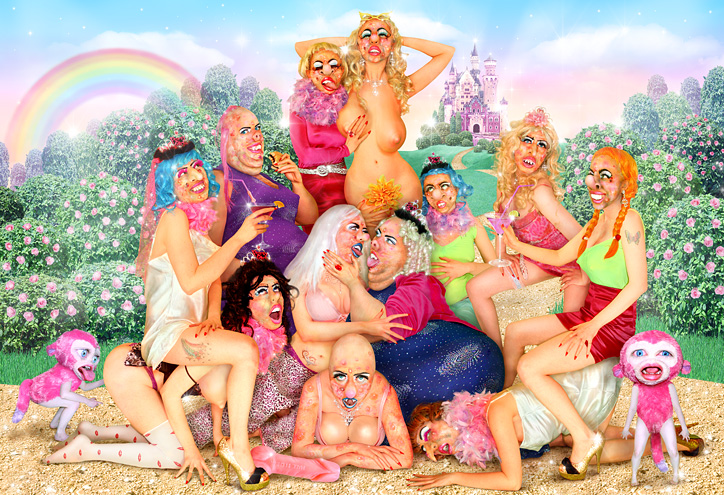 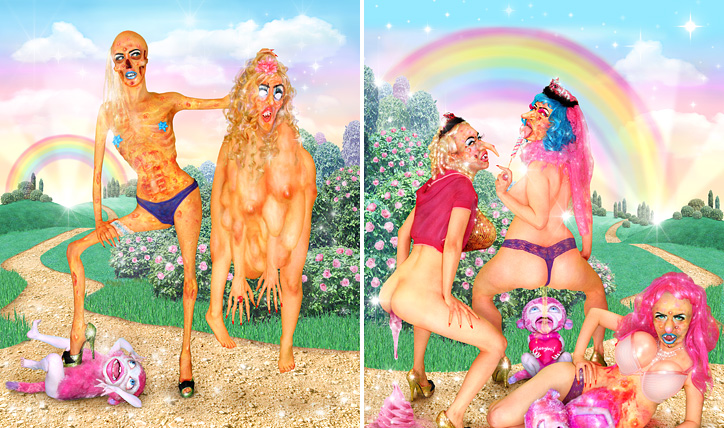 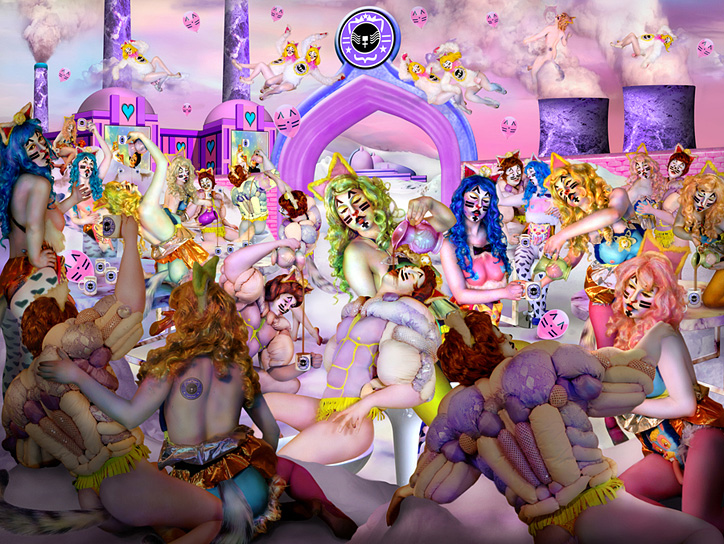