Welcome home, all is forgiven 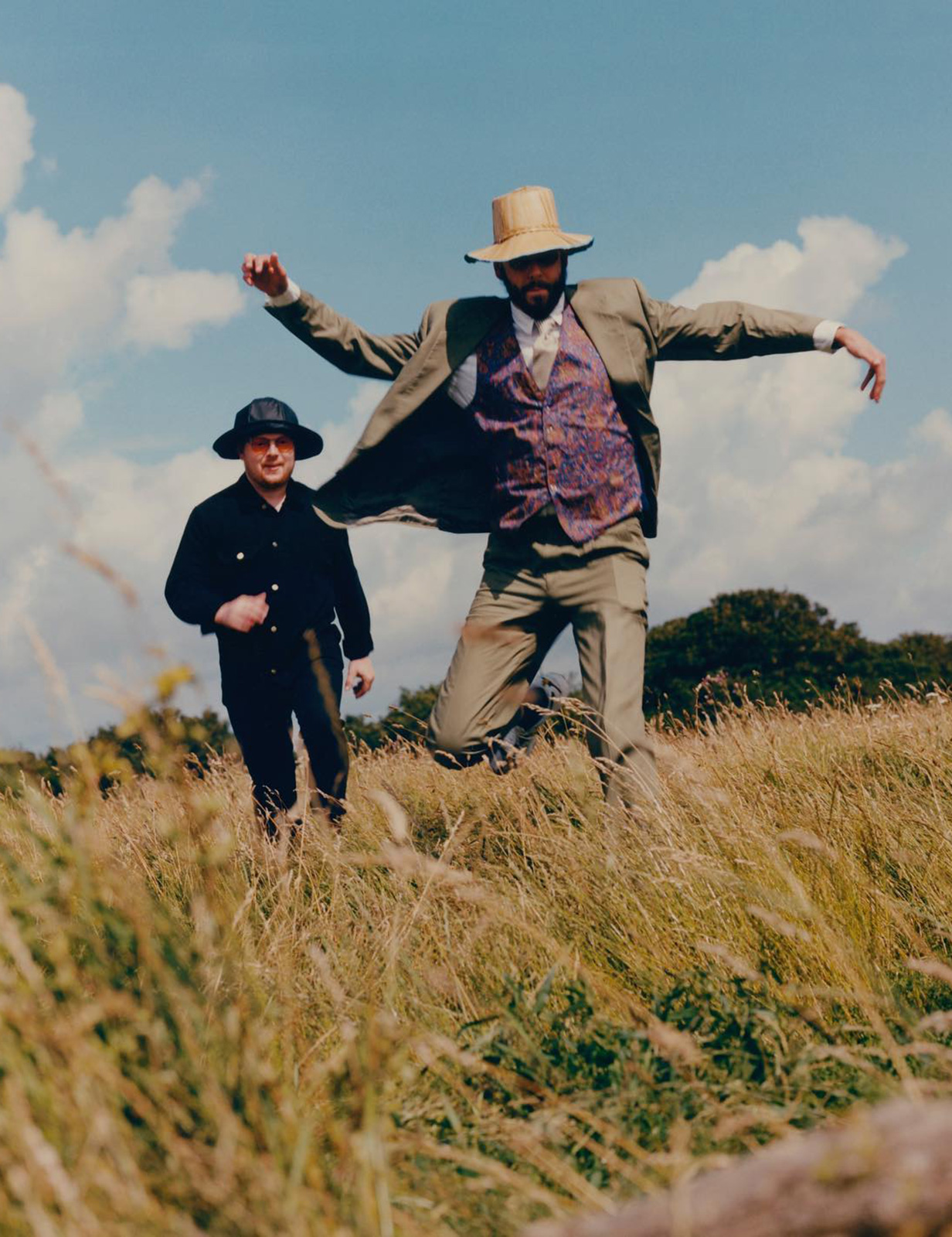 There is no dystopia for the Lord of the Harvest, aka Peter Talisman. The musical project of these Brighton-based artists sees the light this week among many album releases. Sitting somewhere between Organ Tapes and Iglooghost, acoustica and electronic-music-machine, the album is a highlight of 2021’s musical landscape, where retro fiction comes from an avant-garde approach and melodies are the voice-over.
“Don’t see why I should report every detail of my personal life”, says Luci to Brian Botsford in David Leavitt’s While England sleeps, feeling overwhelmed. We live in times that we expect to share everything and its significance for all to understand and comprehend. Mystery and fiction are old fashioned. But that's where we find escapism. Peter Talisman creates a beautiful musical escape in which the sound of guitars are just as important as the recording tools used for them, because they are the words of this tale. It's an anarchist artistic sonic experience that is gentle, and comes from an unknown mark on a retro futuristic timeline.

“The harvest is a foul and reckless affair, but can culminate in such untold beauty that ultimately it is a justifiable means to an end. Peter is the ring-leader, the instigator” is the idea behind this yarn. British musicians Greg Feldwick (Slugabed) and Samuel Organ are said to be the real people behind this project, although Peter Talisman doesn’t hesitate to deny it and refer to them as “traitors”. Three months ago we got to listen to A Life-Changing Discovery, the first single of Lord of the Harvest, the album that introduces us to the Peter Talisman universe. It’s time to lie back and think of England’s landscape and folklore.

This project goes beyond its suspicious fictional imaginary. You can almost hear the fingers of Talisman playing with the chords of different guitars facing each other in the minimalistic Rest Easy. With some spooky moments, Lord of the Harvest is unclassifiable, and that's what makes it stand out. It wittily merges both Samuel and Sluga musical universes. Is there a subtle bossa nova rythm playing on Ley U down? The whole album features expansive and brilliant moments such as the ones generated by the impressive We Have To Leave This Town Because I Have Done Something Unforgivable; the costumbrist Live From Cley Hill or the intriguing lo fi The Absolute Scene at Stanton Dew.

The melodies are the narrative of this assertive story, where textures, guitars, filtered vocals and prog rock beats move from experimental jazz to electronica, creating what the sound of 2034 might be like. This is a sleek voyage. Either to the future or the past, it doesn’t really matter. There may or may not a video game on the table as part of this project in the following days too. You can hear electronic interferences that serve as transitions in between songs; we got signal this past week and had the opportunity to speak to Mr. Peter Talisman himself.

Hello Peter Talisman: it’s great to finally talk to you. Here in 2021 we feel very excited to listen to your first album, Lord of the Harvest, for the first time. How are you feeling?
I am weary. The harvest season has been long and hard and the storms have been plenty. I will be very relieved to share my yield with the townsfolk.
Before the record release –and I believe that that was when Peter Talisman came to life- the world went through an unprecedented pandemic, Covid19. How did it impact the creation of Lord of the Harvest?
In fact, me and my collaborator Tim Wheatsheaf both enjoyed elements of the lockdown. We are both very fond of nature and were able to take many hours walking among the crops and discovering ancient ruins and such. In other ways the time has been difficult; the subliminal catalogue, the source of our harvest, has been rife with a sour spirit. However, ultimately it was the change of pace, and trials of the last year or so that culminated in us taking the time to put pen to paper and document our harvest, as lossless waveforms.
A Life-Changing Discovery was the first song of this album that we got to hear back in August 2021. It sounds captivating and mysterious, but also like the soundtrack of a broken world. If you close your eyes while listening to it you can almost see a dystopian land where nature seems to have suffered; it’s not the future we were promised. What is Lord of the Harvest about?
There is no dystopia for the lord of the harvest. His world is rich and plenty. So long as the crops keep growing, so too will his lust for life. The reason you have mistakenly interpreted A Life-Changing Discovery as melancholy, or full of suffering is simply due to Tim Wheatsheaf’s production techniques that involve burying the neural cartridge in the garden for 6 months before recording the output to tape. It makes for a robust and rustic finish. An acquired taste.
In the neck of the woods of the internet it was said that your music is “bottom-of-the-hyperpop-iceberg conceptronica”, and it was even labeled as proto-neuro-folk. How did Peter Talisman come up with this unique style? Is it true that musicians Samuel Organ and Slugabed were behind all of this?
No! Slugabed and Samuel Organ are traitors and have been trying to claim ownership over our music for months. I am in a lengthy and stressful court battle with them both, and I wish to dwell on this subject no further.

The second single of the album, We Have To Leave This Town Because I Have Done Something Unforgivable, also sounds nostalgic but, this time, adventurous. There’s a suggestive bass-line that makes this music a storyteller on its own. And the video for it, made by Elliot Elder, is a brilliant piece of retro-futuristic art. What’s the story behind the song and the video? And what was that unforgivable thing that made you or them to leave the town?
The song is about a time when John Ovaltine and his wife Jessica had to flee their hometown due to John’s confused state leading to a number of indiscretions of which I won’t go into too much detail. The music video itself was started in 2004 by a dear friend in Switzerland, and finally came to fruition in the autumn of 2021, thanks to Elliott Elder. It was a long time in the making!
Someone found a t-shirt in the harvest, we had to pull some strings but it is our property now. It’s from a 2034’s Tour of The Taverns of Peter Talisman. What is the tour of a band like yours in 2034 like? Did Peter Talisman tour back in 2021 after the release of Lord of the Harvest?
The only Peter Talisman tour on record is the fateful tour of 2034. Much debauchery and regrettable incidents. The band may well have toured prior to or since this tour, but honestly my memory is shot from all the mudwort and bladderwack I was partaking in back then. 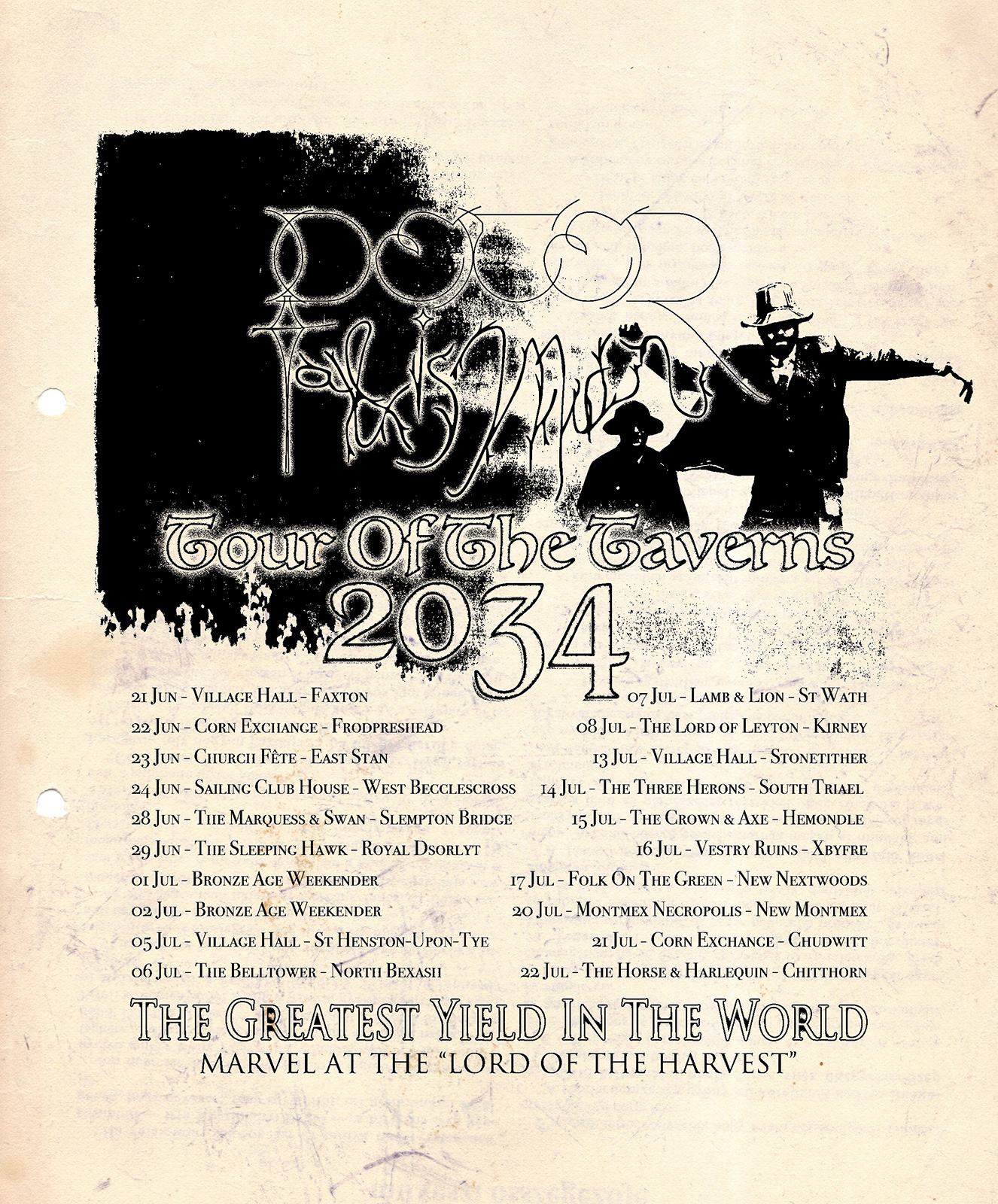 You can read in the back (of the t-shirt) that you played live in places like New Montmex, St. Henston Upon Tye, Slempton Bridge or New Nextwood, that we’ve never heard of. Are these places in England? 2020 and 2021 were very difficult years around the globe, and social and political issues were all over the place. Do you remember what it was like back then in England, and did that climate influence your work?
England is equal parts hell-hole and heaven’s gate. We tend to avoid interacting with the people, unless we are at The Old Oak Tree. The birds and the badgers are our envoys when we are in The Kingdom.
We also managed to find a name related to Peter Talisman; Arthur Portal-Dolmen. They seemed to work together in the field, and it was also said that they were the secret identities for Samuel and Gregory. Anyhow; what was it like working together and how did you approach the concept of this project?
There are many members of the band, all equally integral to its success. Here is a list of band members and their respective instruments, as lifted from the sleeve notes of the LP: 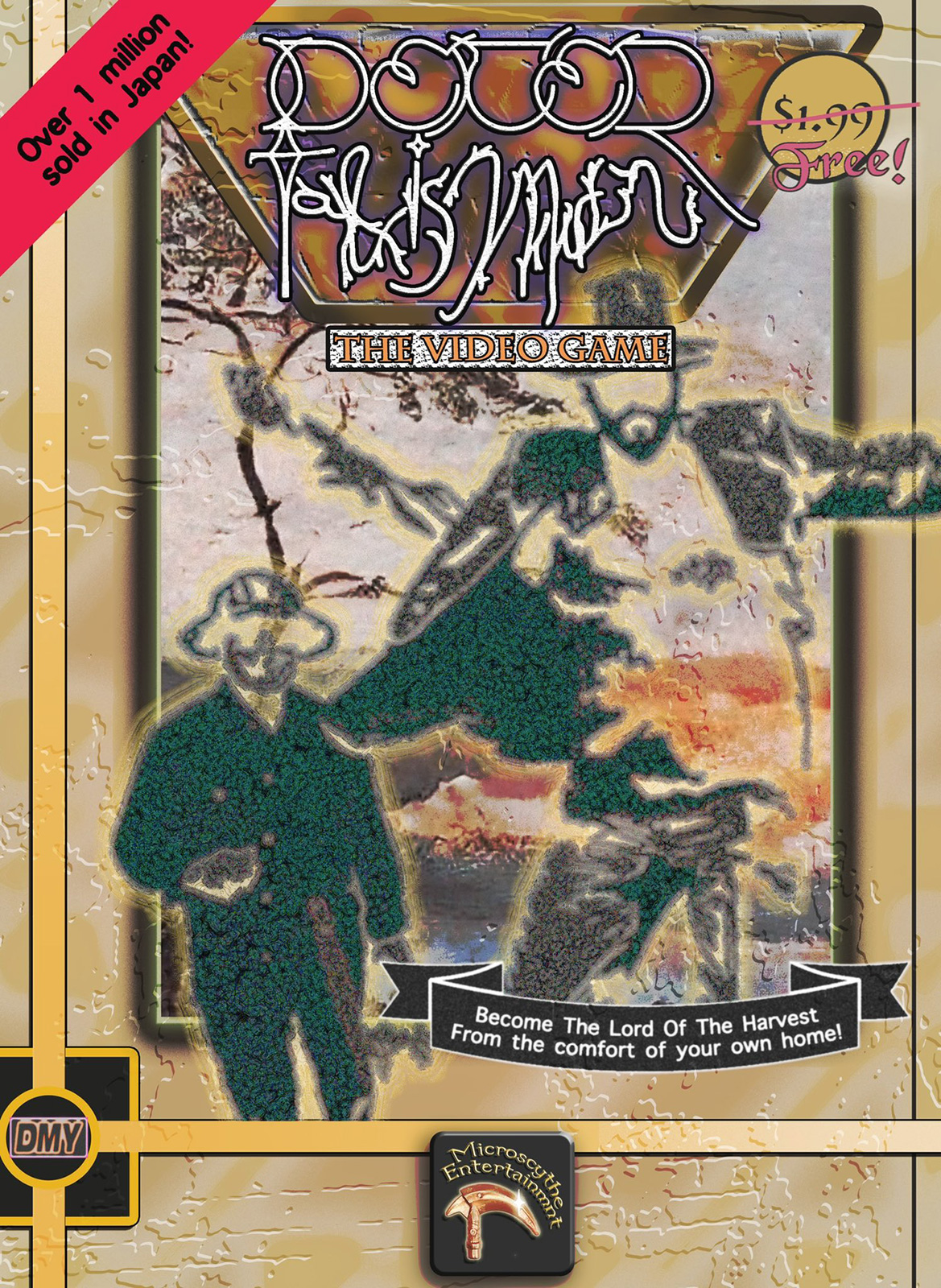 Prior to the release of the album there was a really interesting view when you looked at the British alternative electronica scene. Were there any other artists or musicians involved in the creation of the record?
Unfortunately, we are totally oblivious to everything else going on.
There is a third song, Dance of the Equinox, that we got to listen to before the whole album. It resonates like a slow motion and chilled rave that is taking place in the woods, like a secret party. It is another great example of how the music of Peter Talisman is quite visual, it appeals to fiction and it makes imagination an important part of the listener's experience. Are there tales that inspired these songs? Or are the songs meant to inspire new tales?
These are songs to summon spirits, songs to create stories, and songs to release our own stories unto the world. Every piece we wrote and recorded was part of our documentation of a greater journey. Past, present, future. The music both documents and creates. Everything is cyclical.
Peter, thank you so much for taking your time to connect and talk to us. Just one last thing; how is the world looking beyond 2034?
Honestly, I have not left my own lodgings now for what seems like many years. I do not know what goes on in the outside world, and I do not know what year it is. But thank you so much for taking interest in my band, and our debut LP.
Lord of the Harvest (DMY, 2021) is out now and you can buy it or stream it on bandcamp and other streaming services. 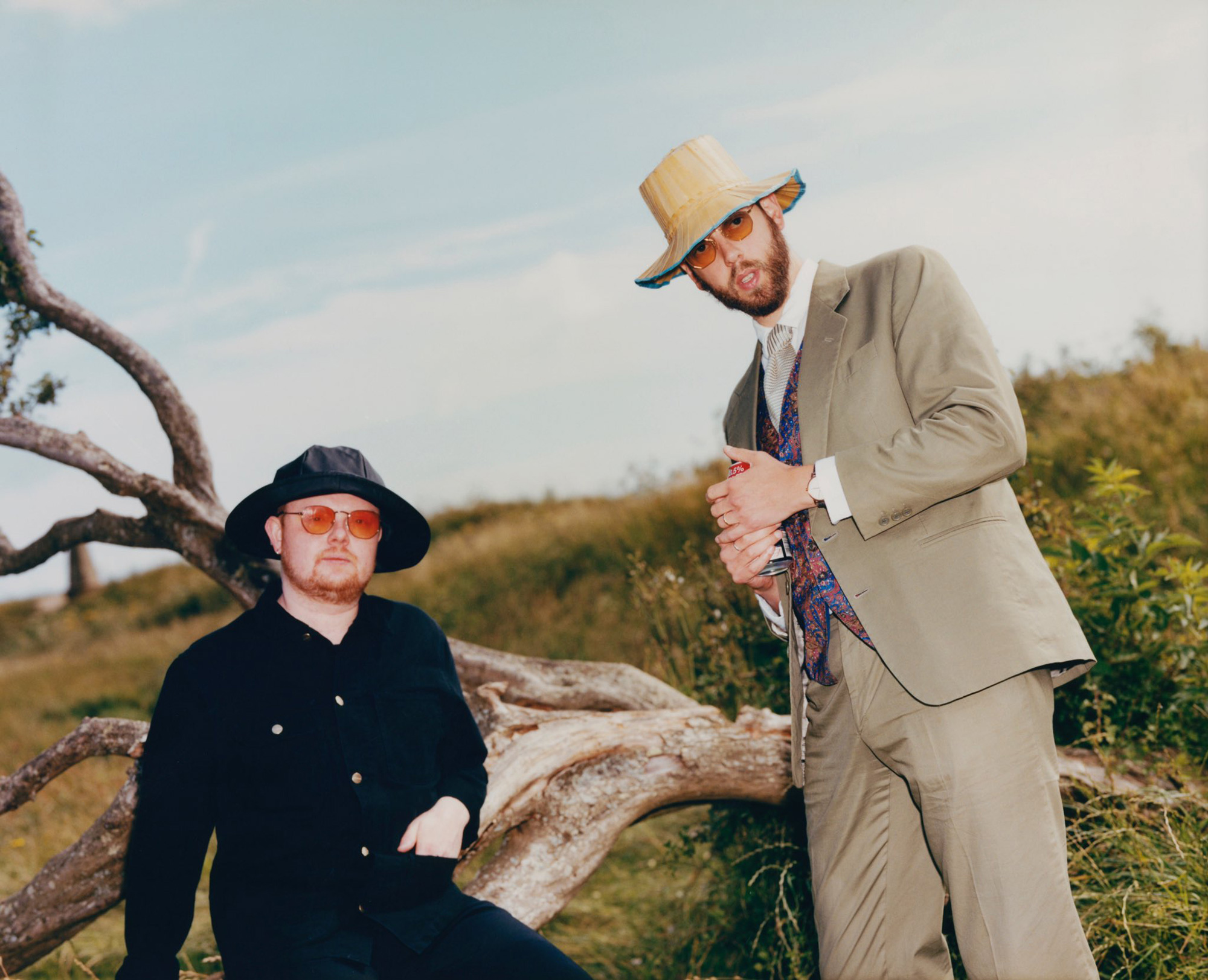